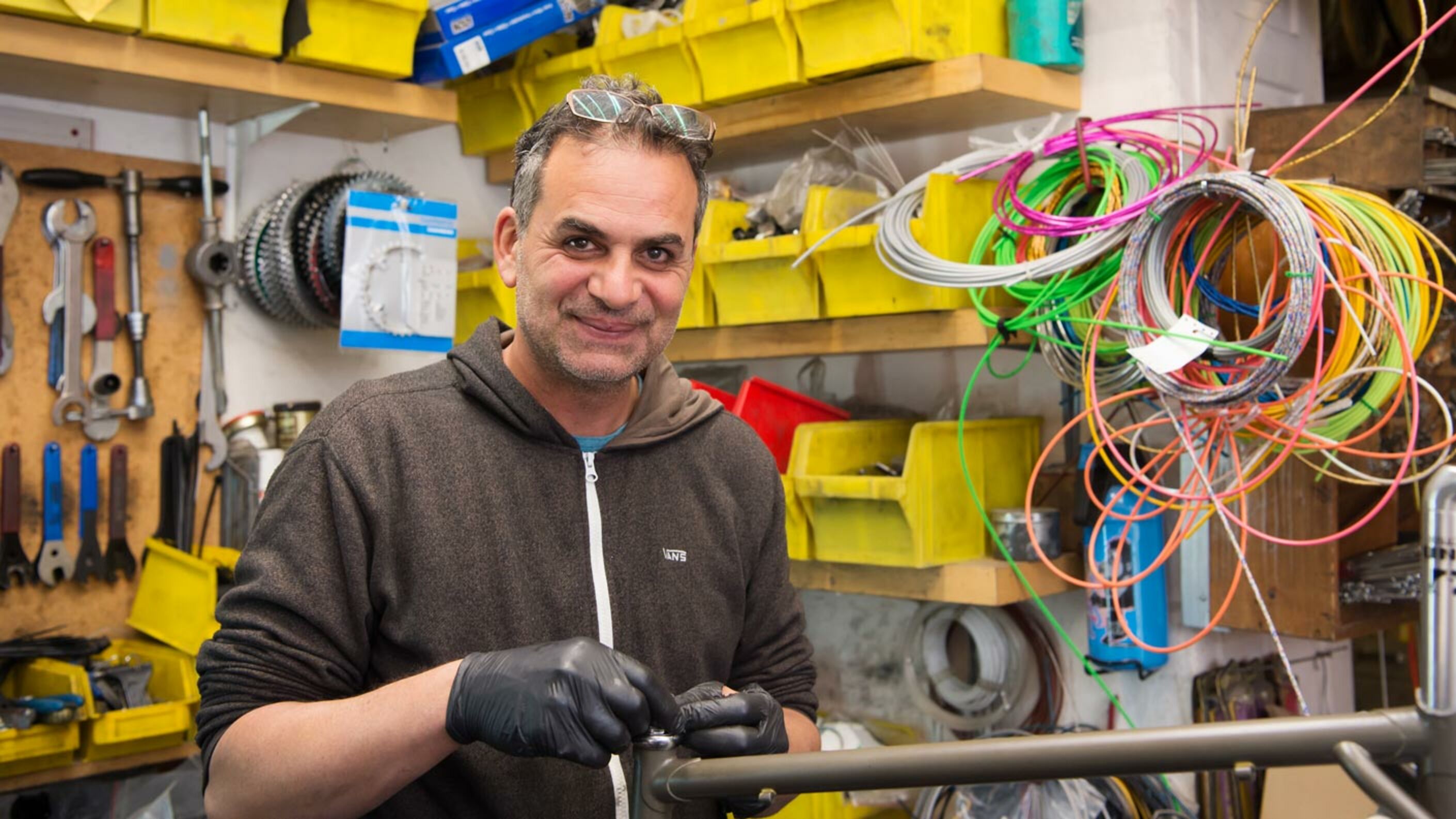 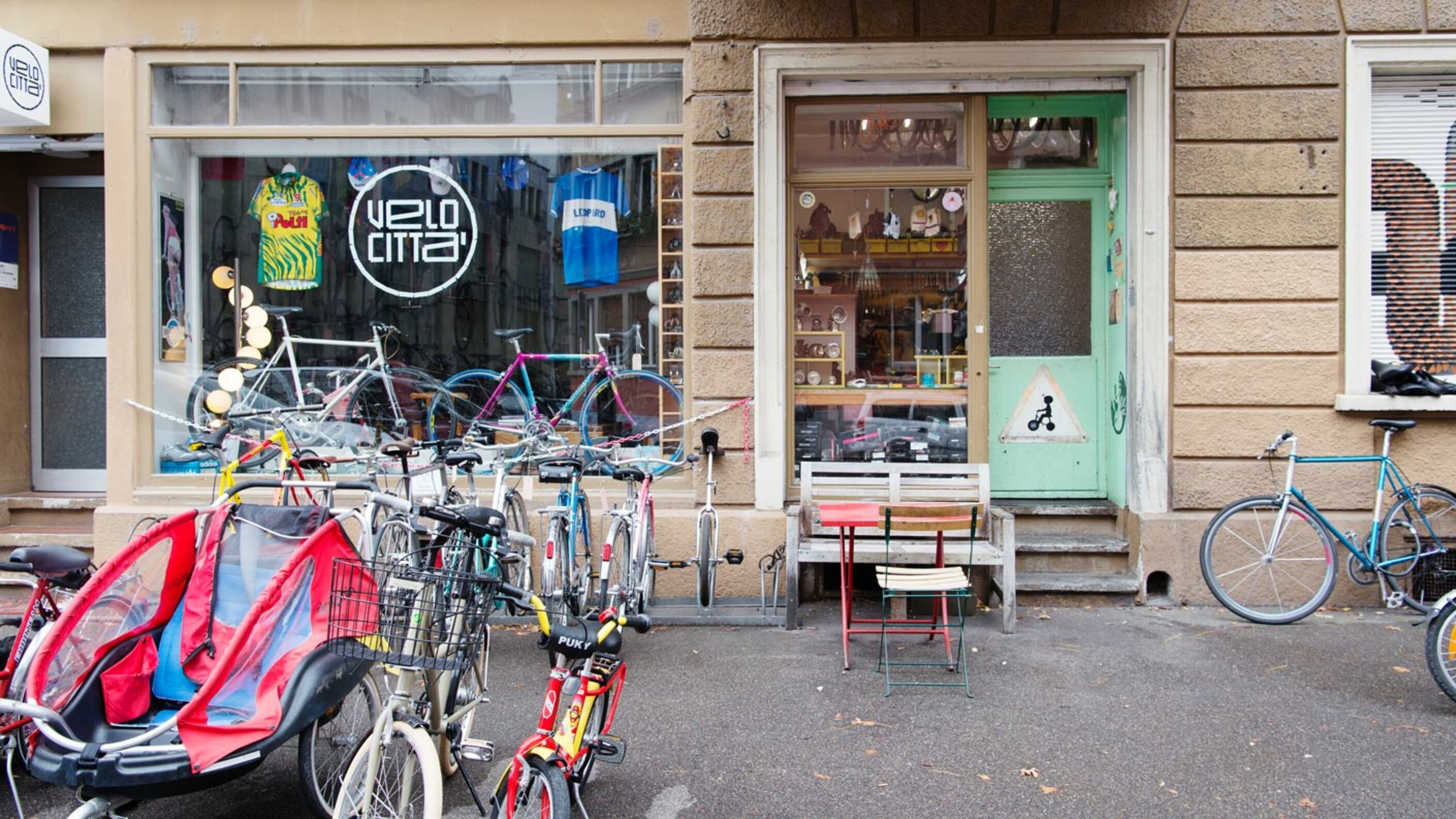 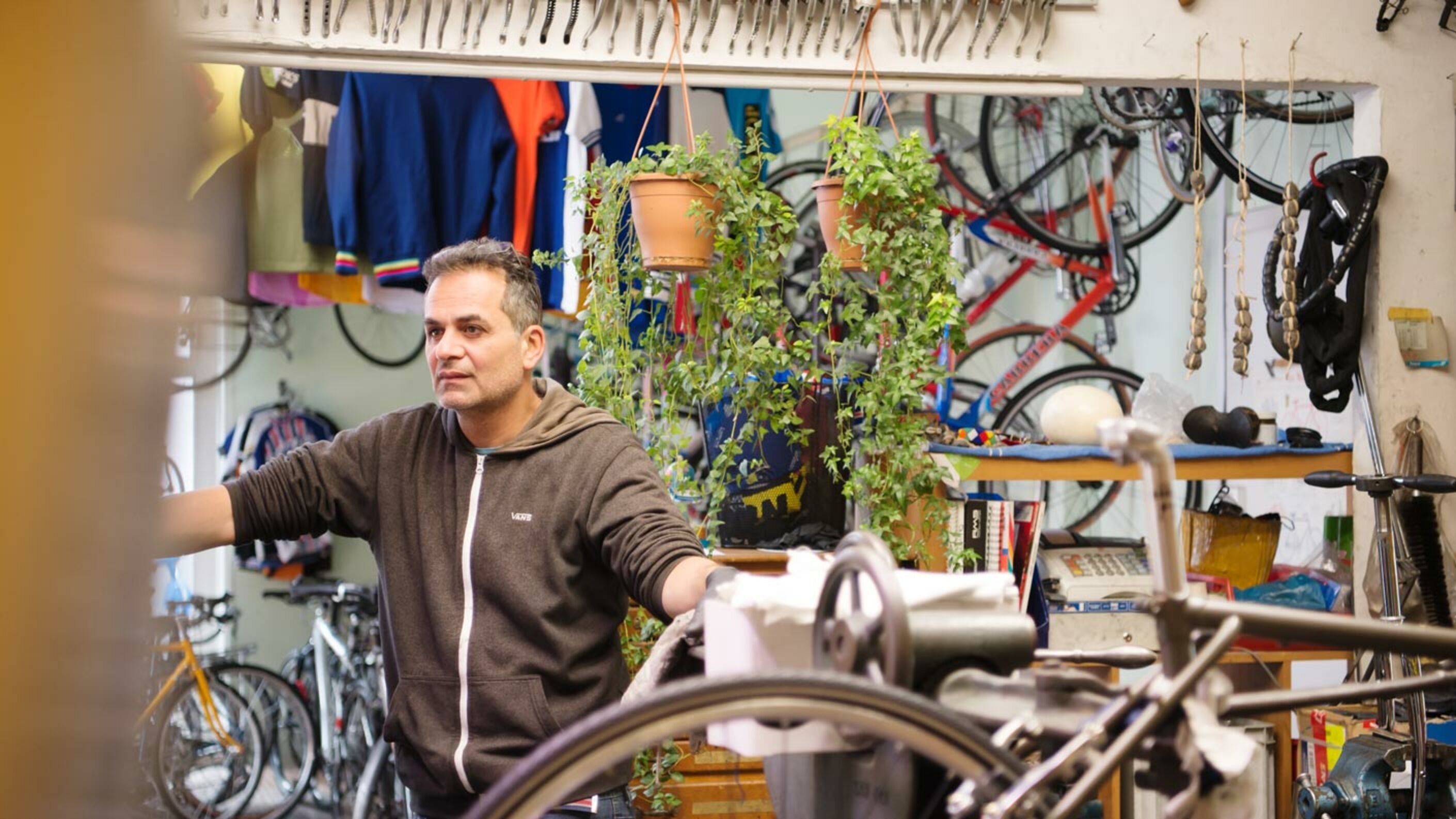 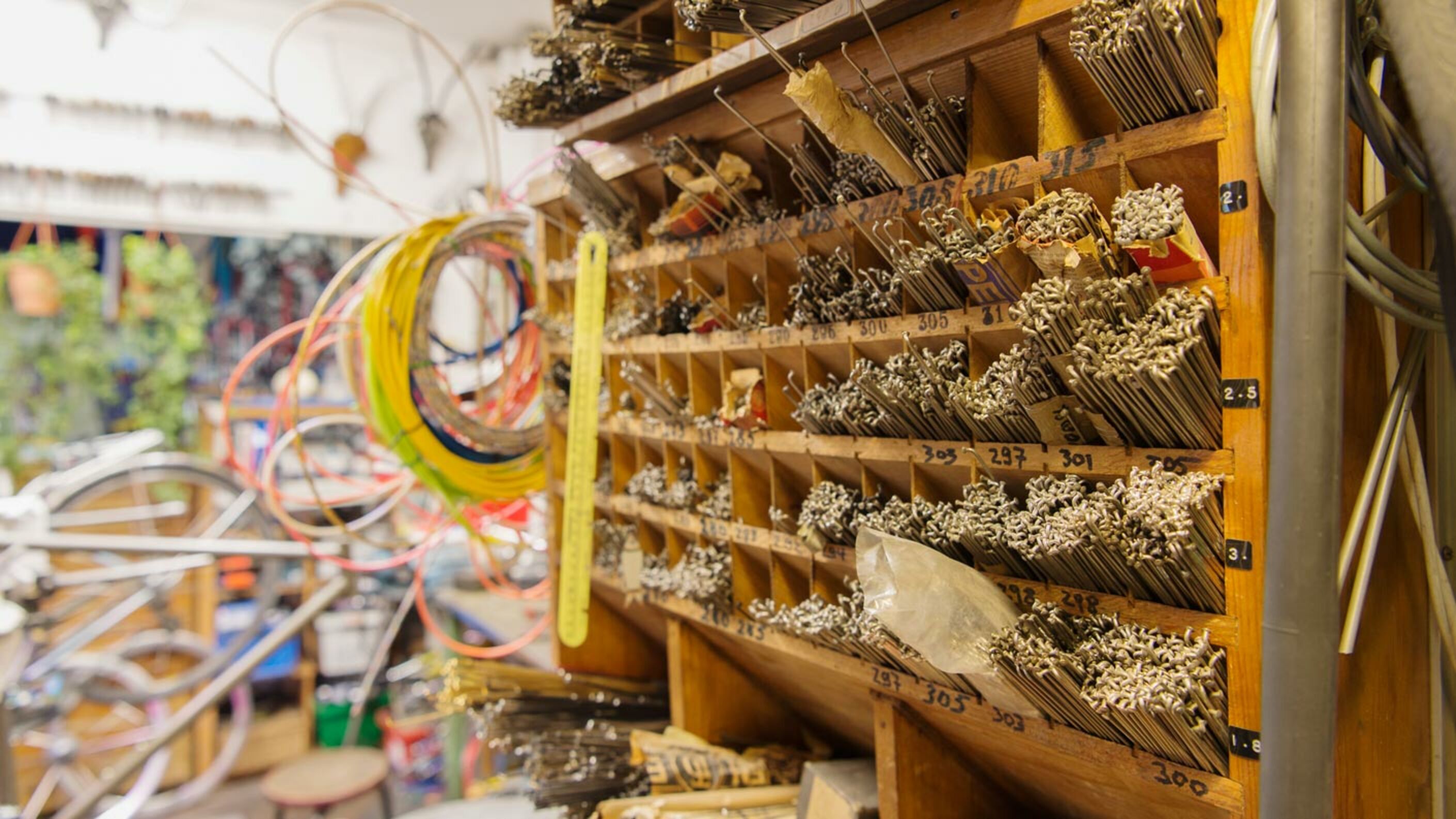 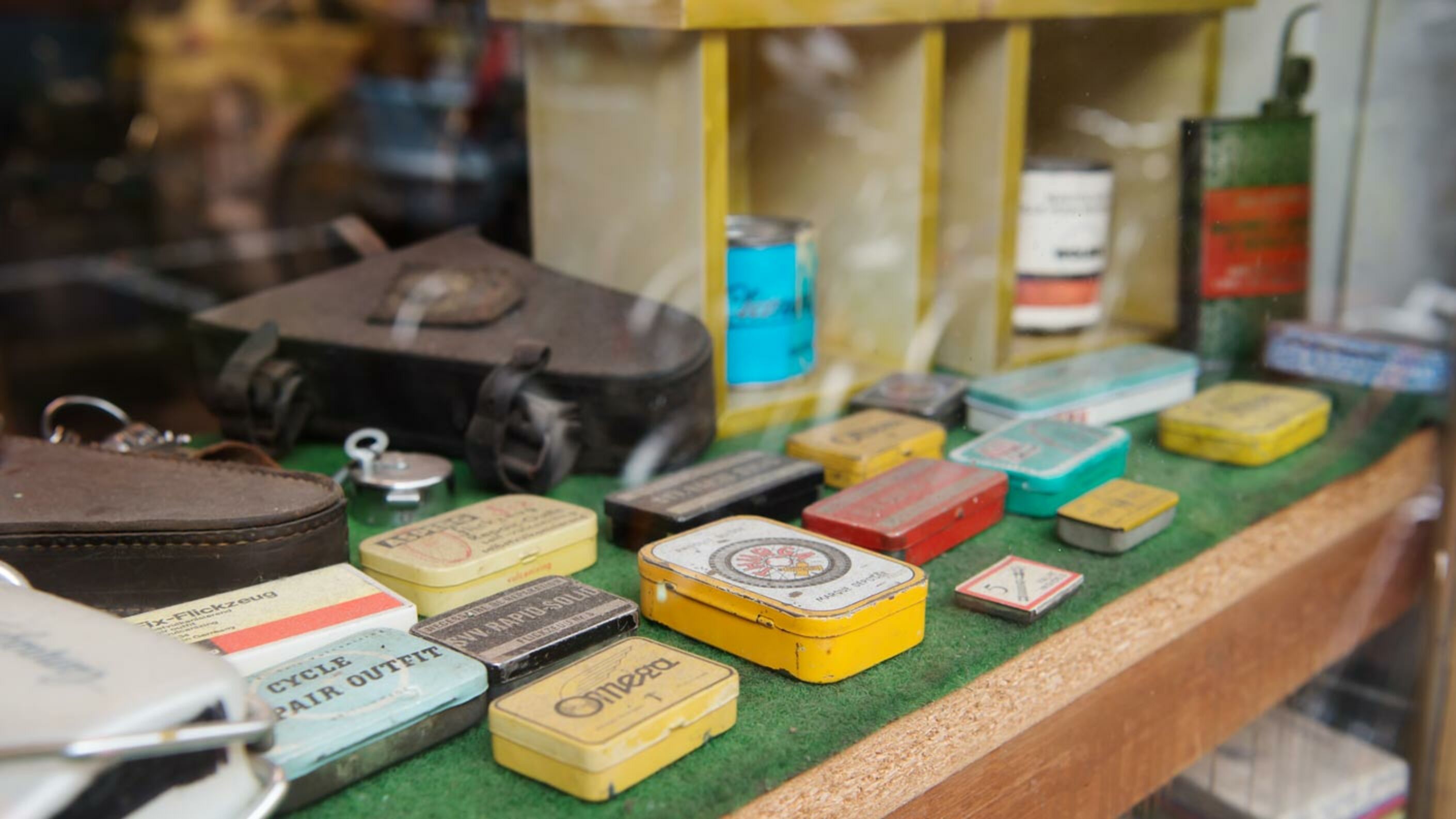 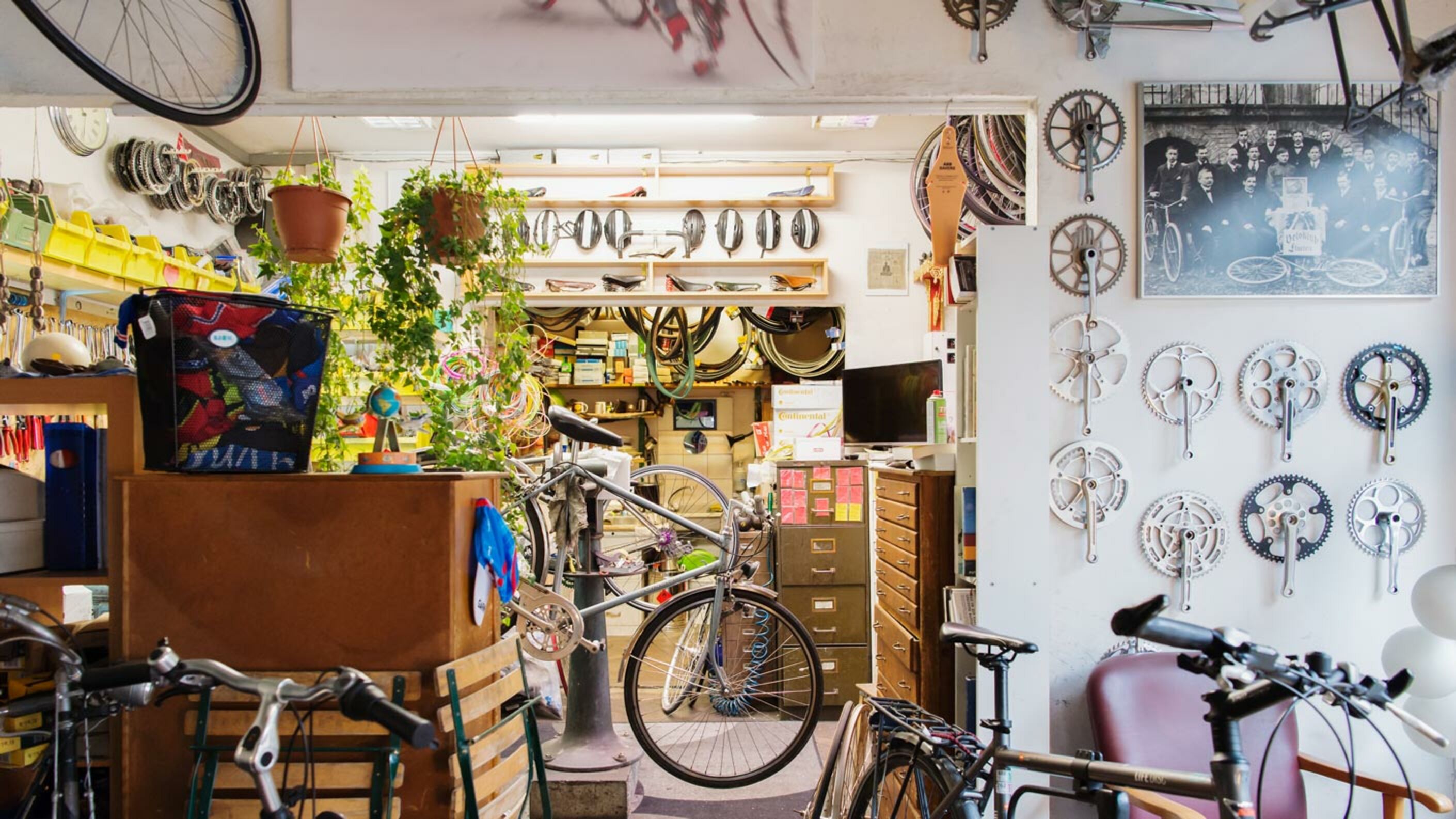 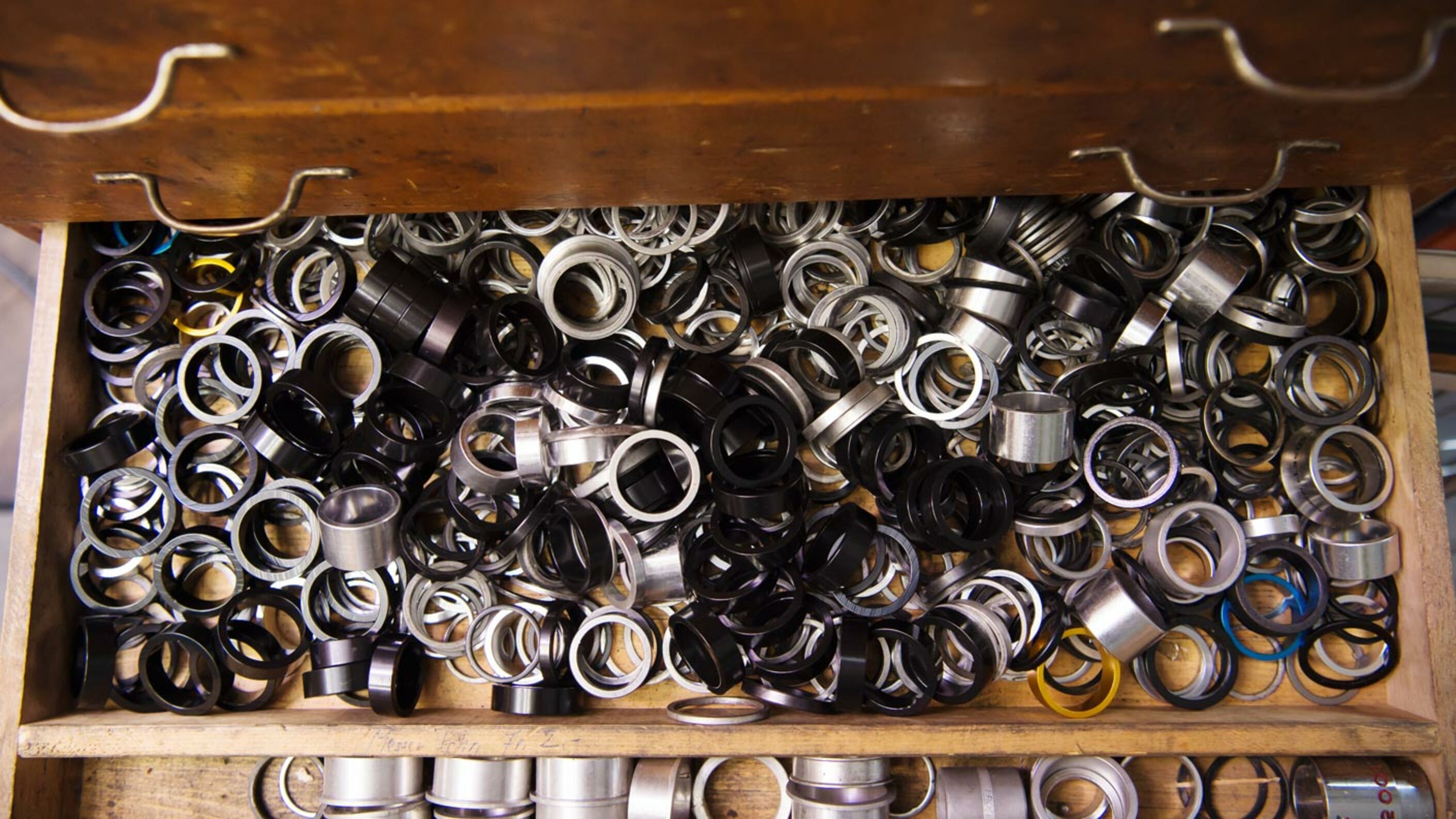 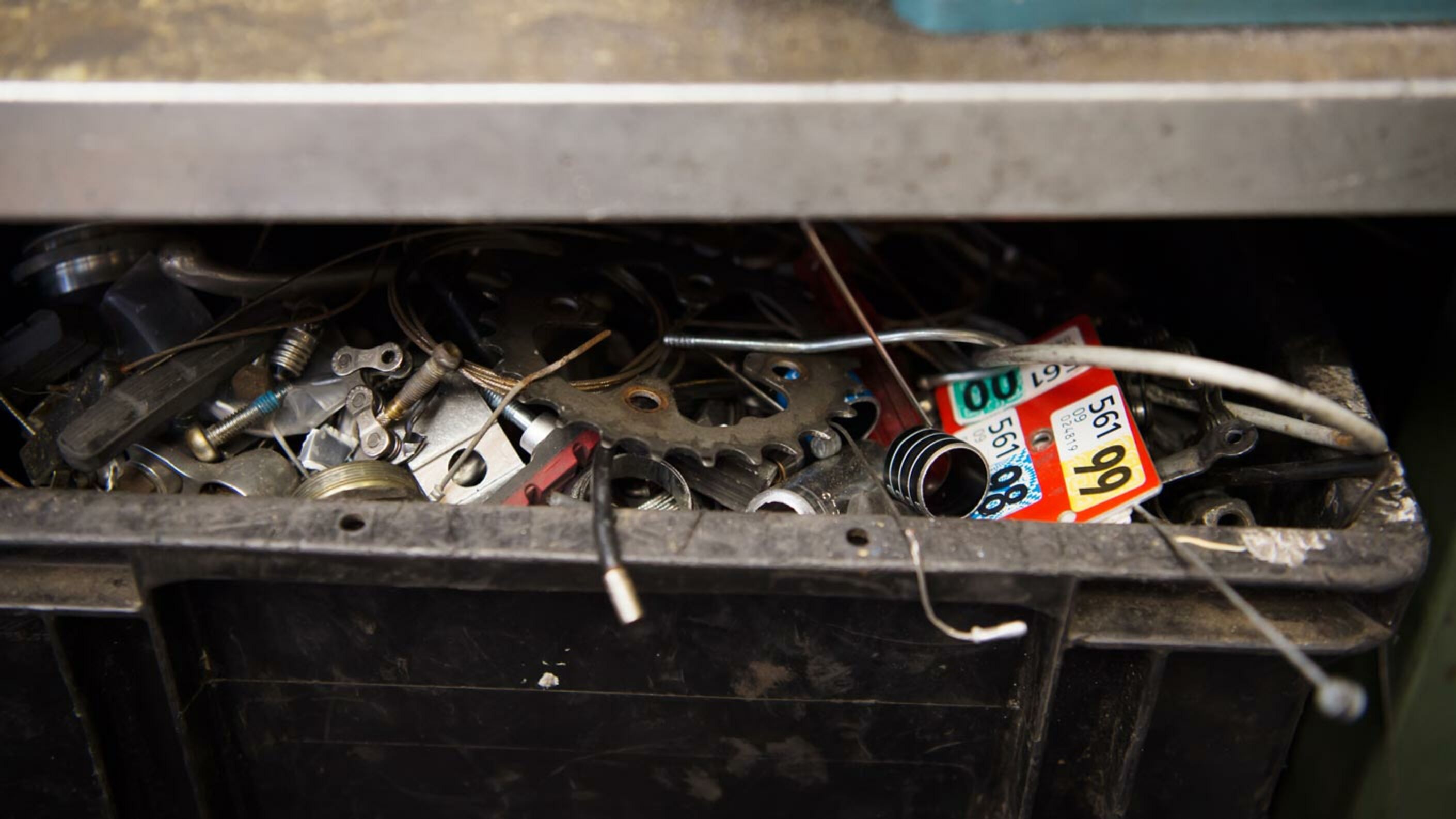 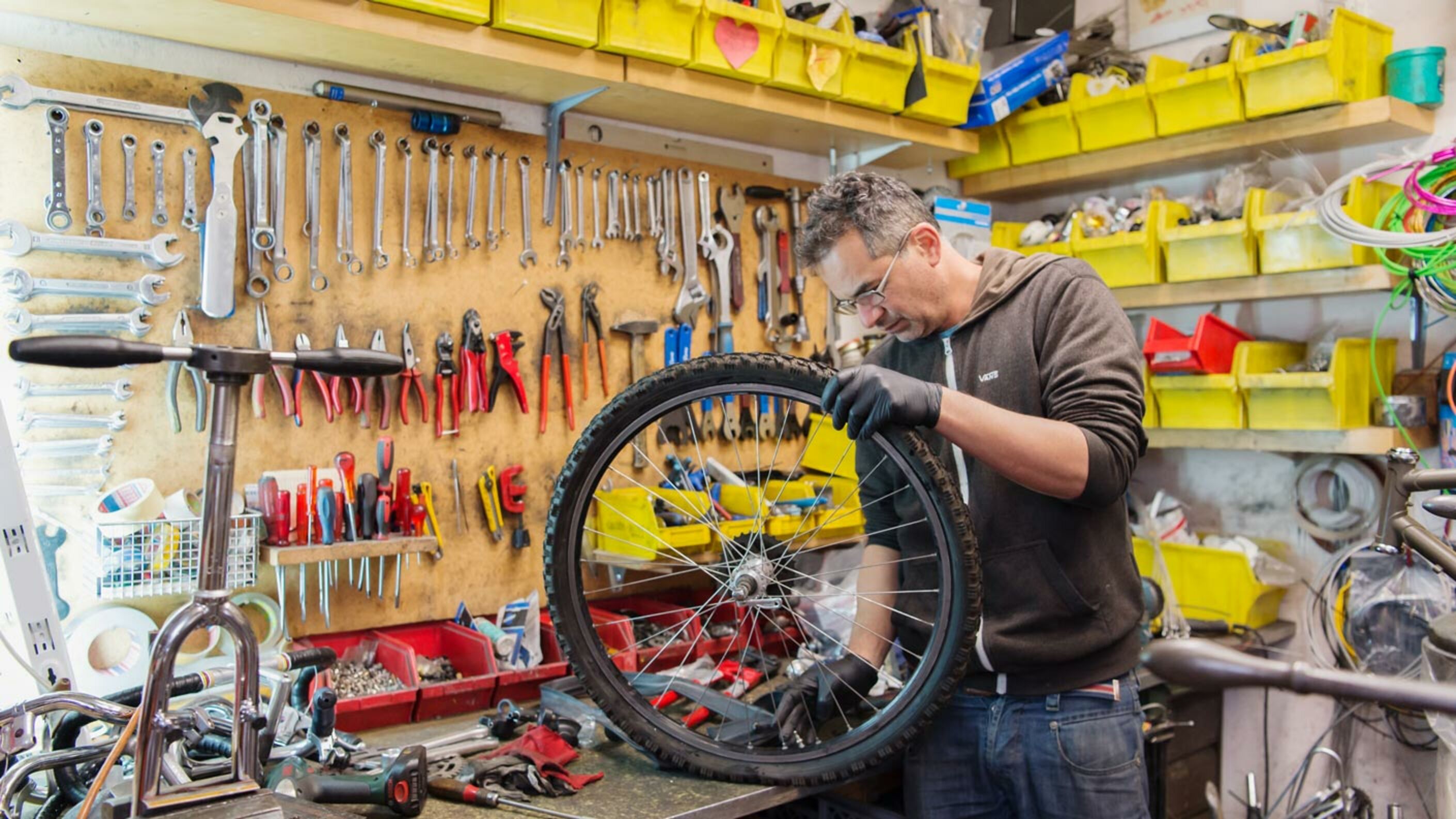 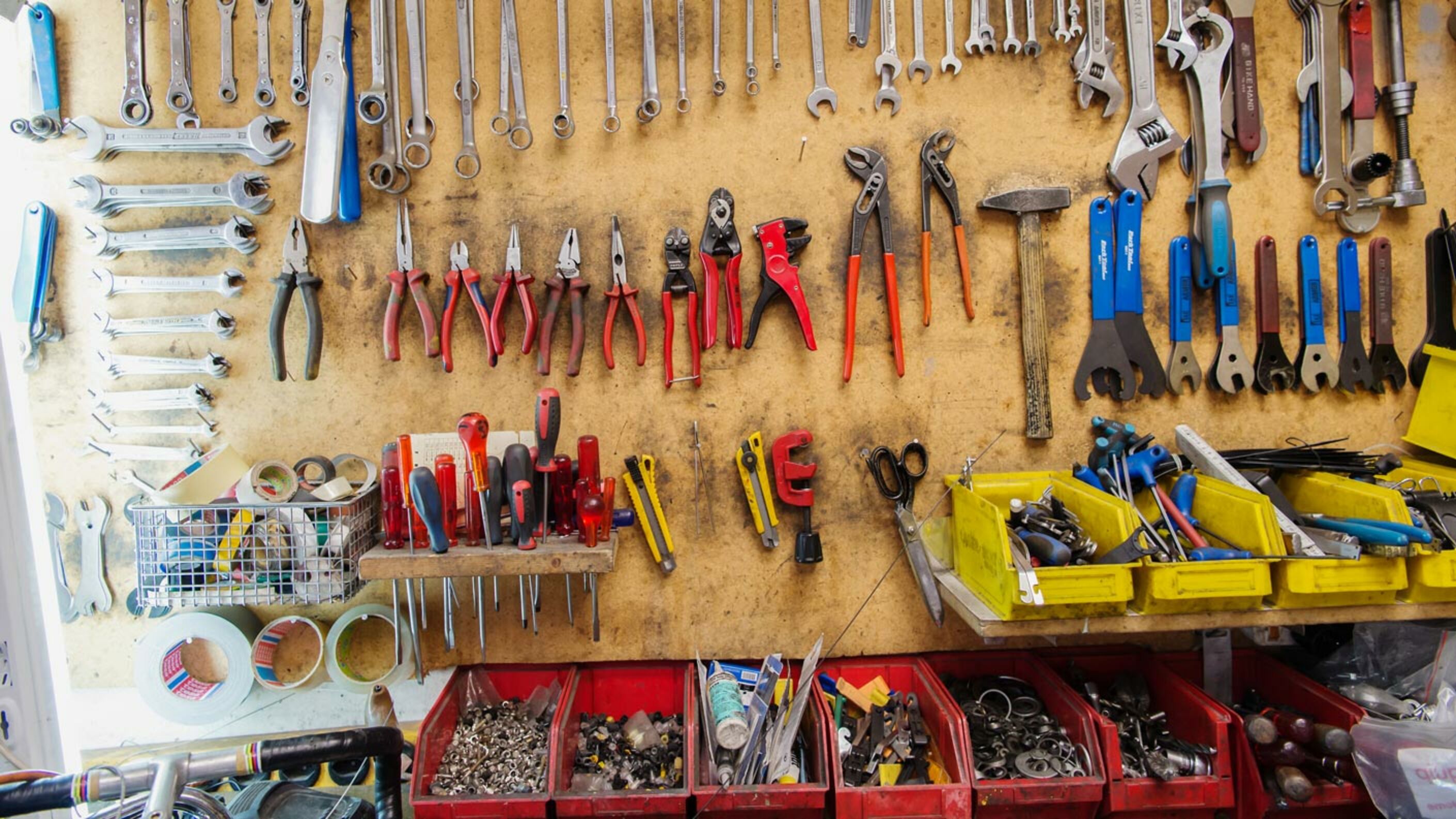 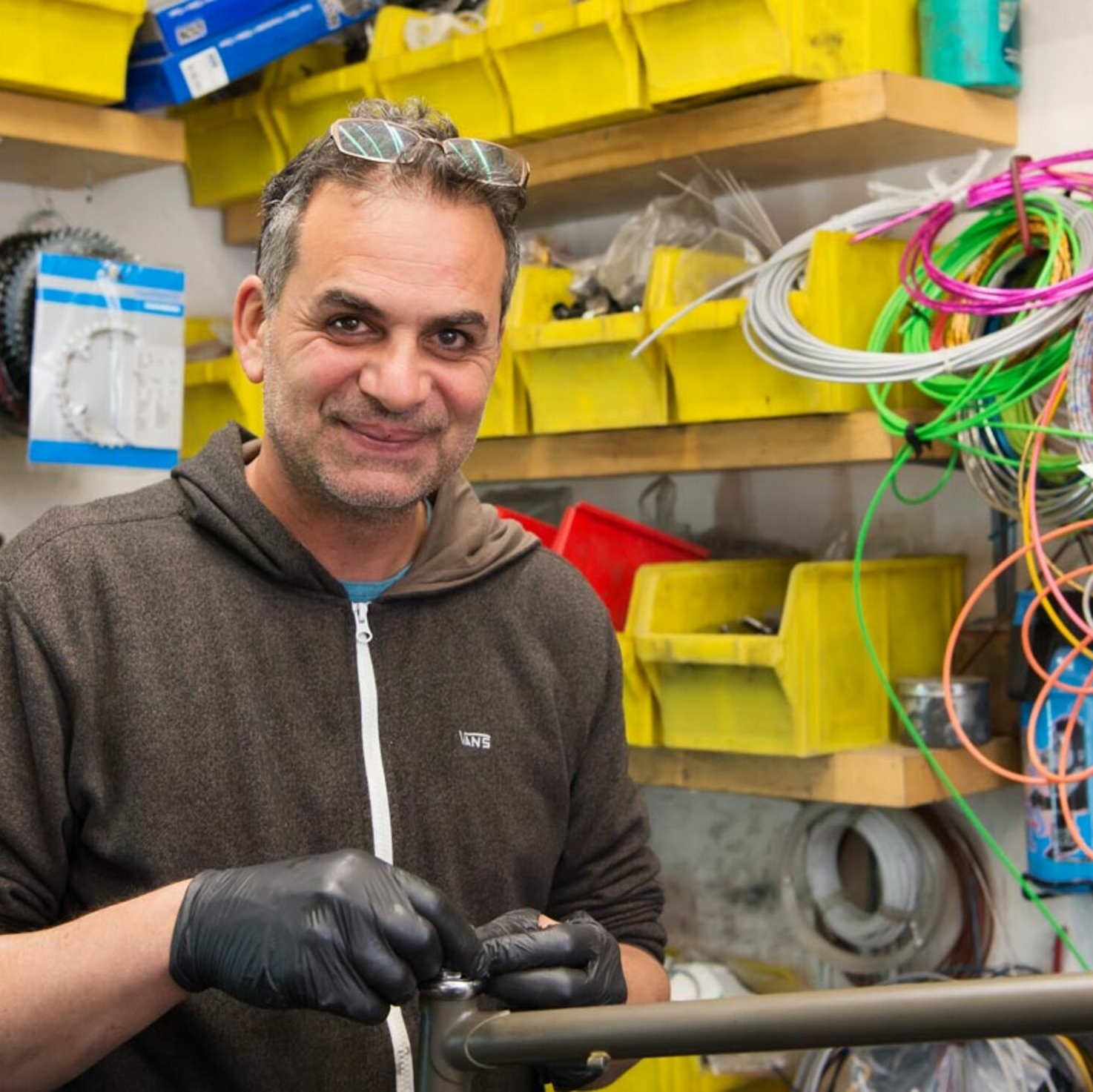 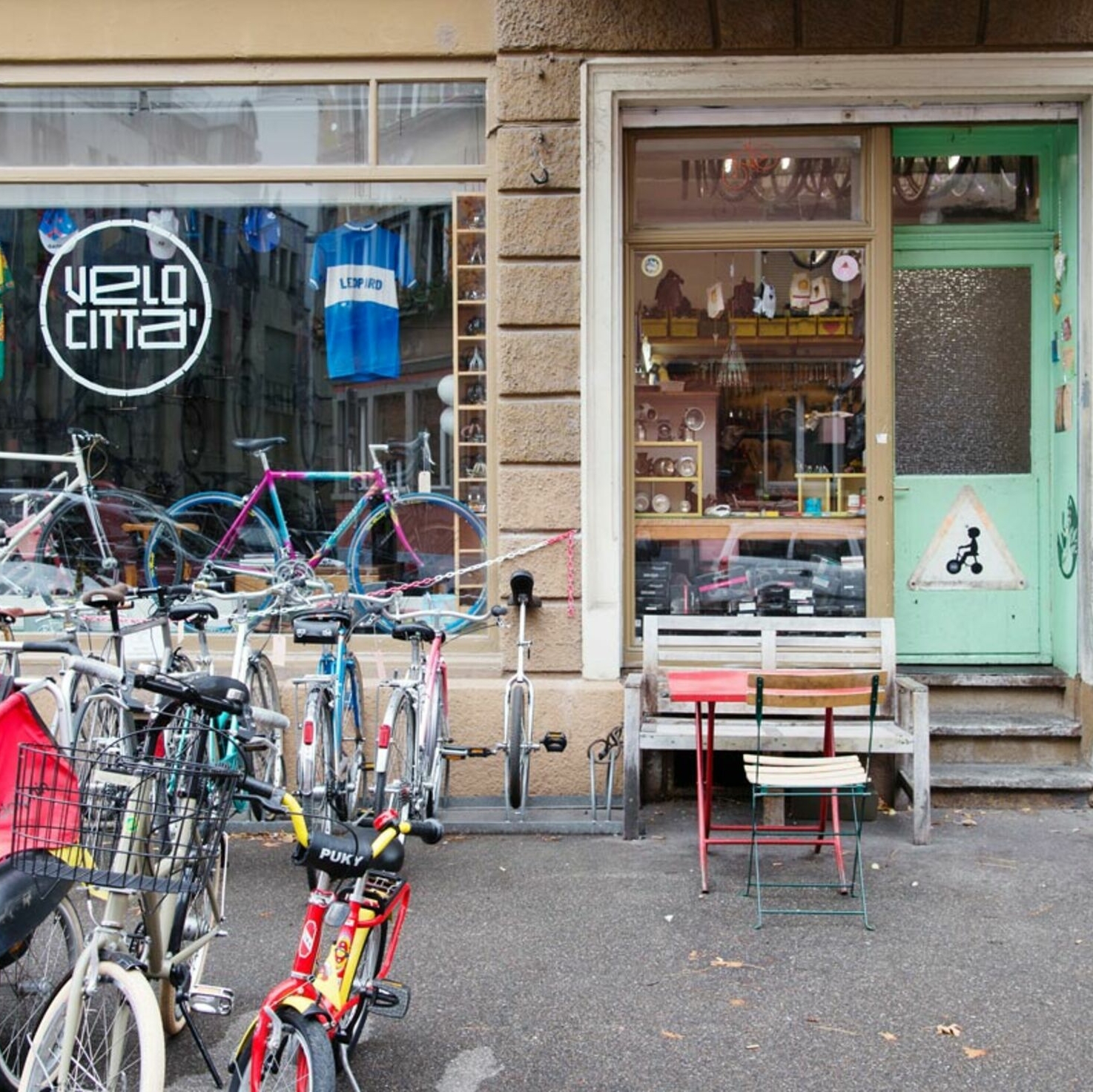 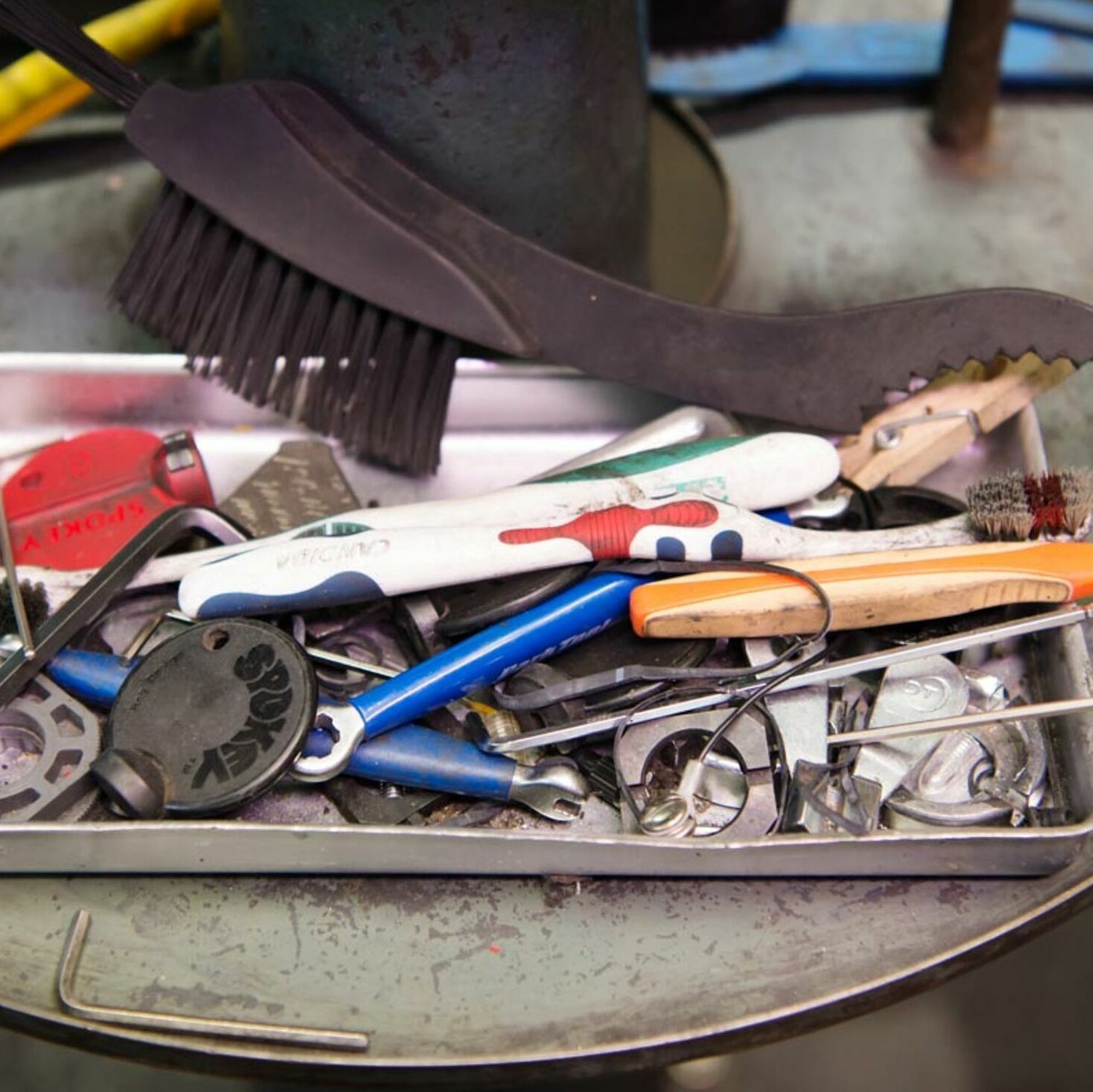 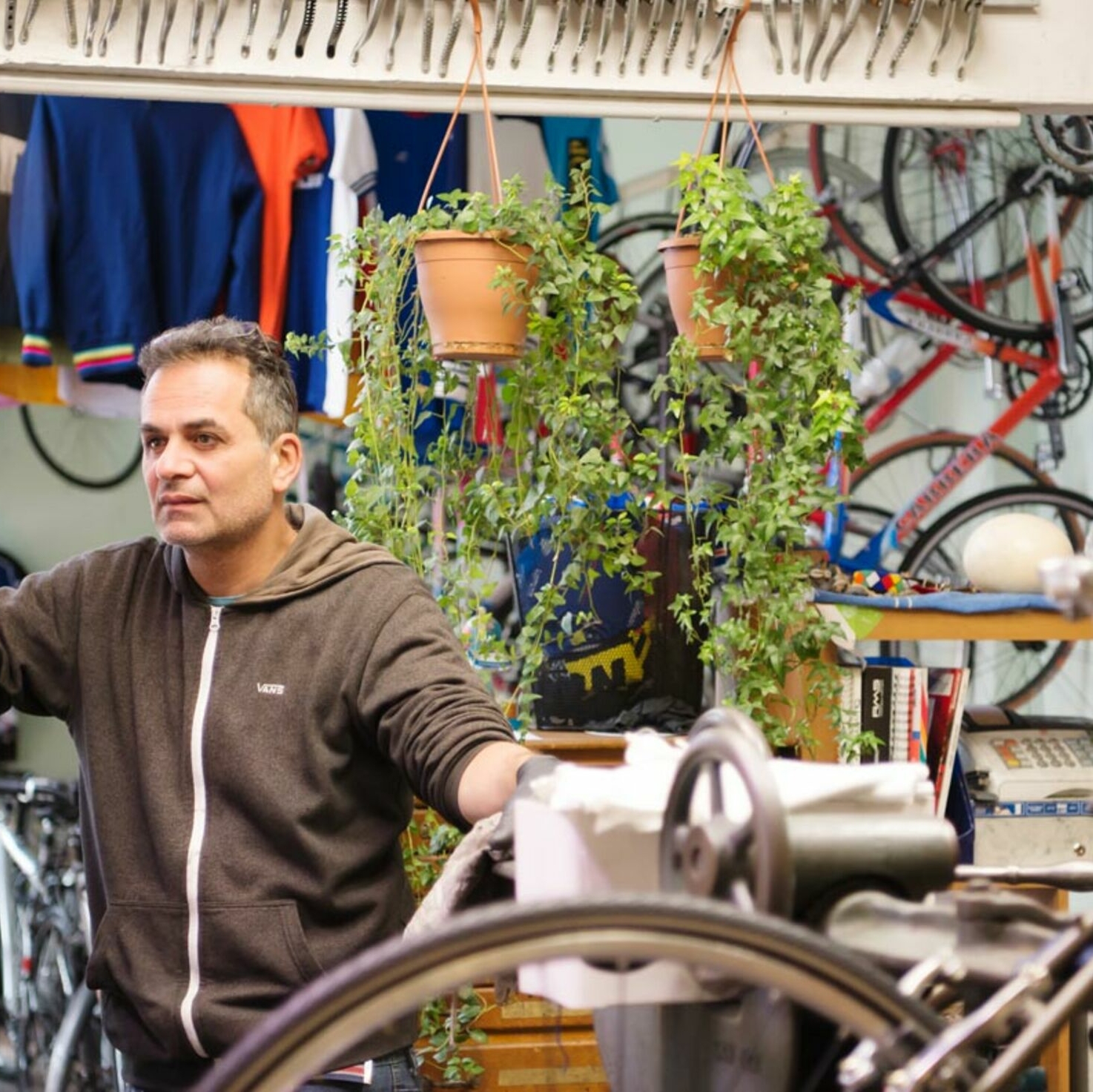 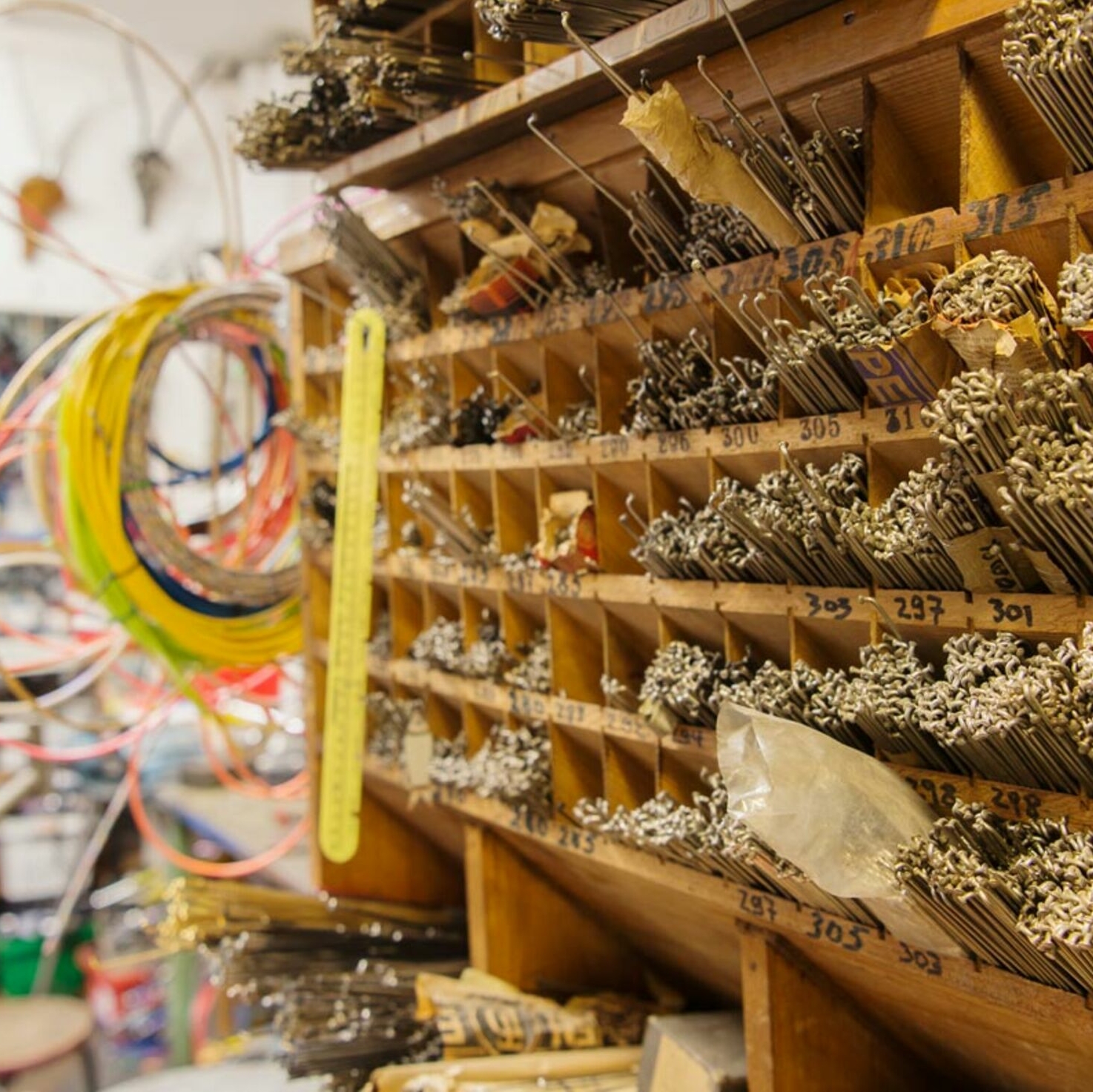 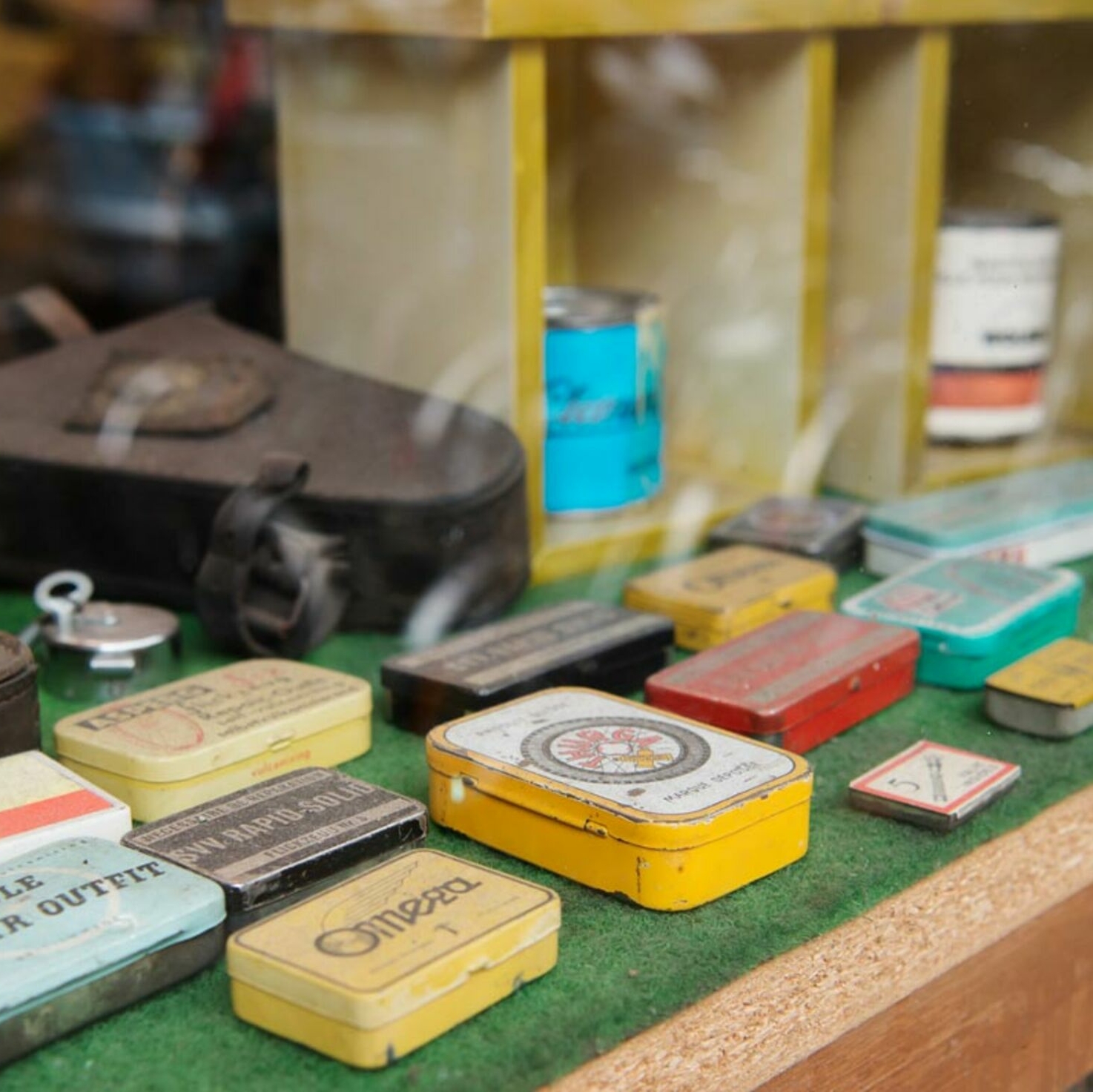 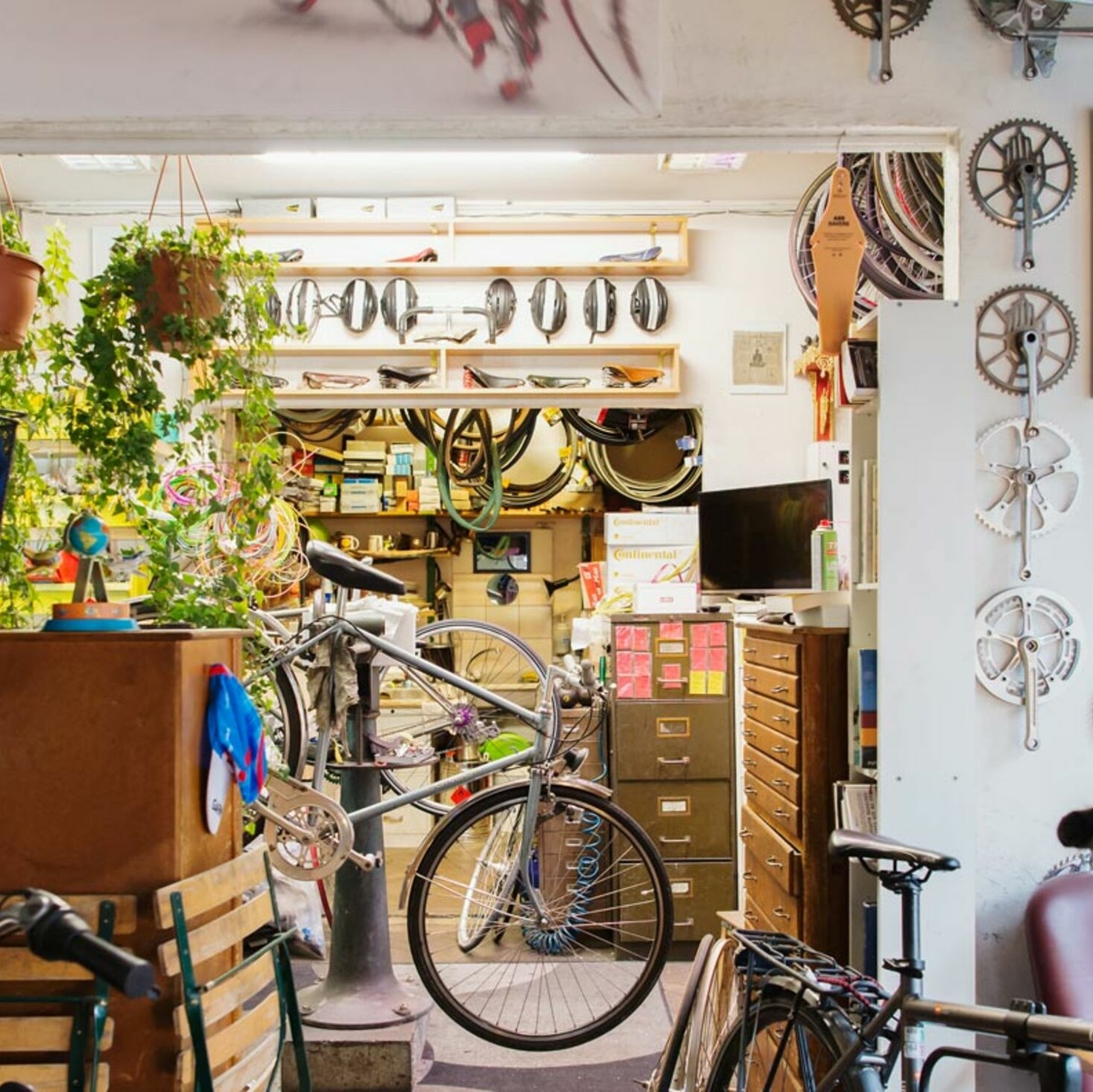 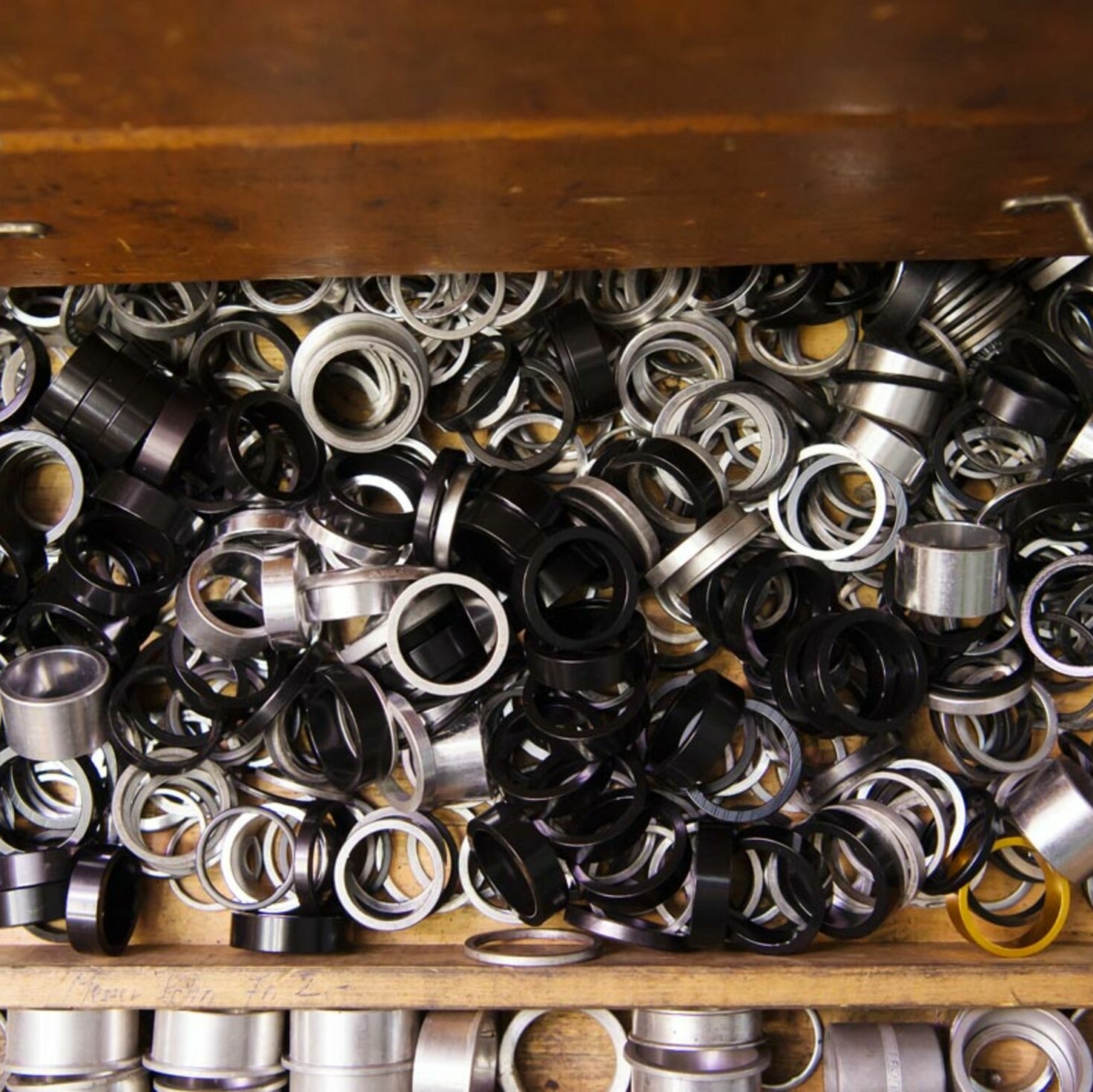 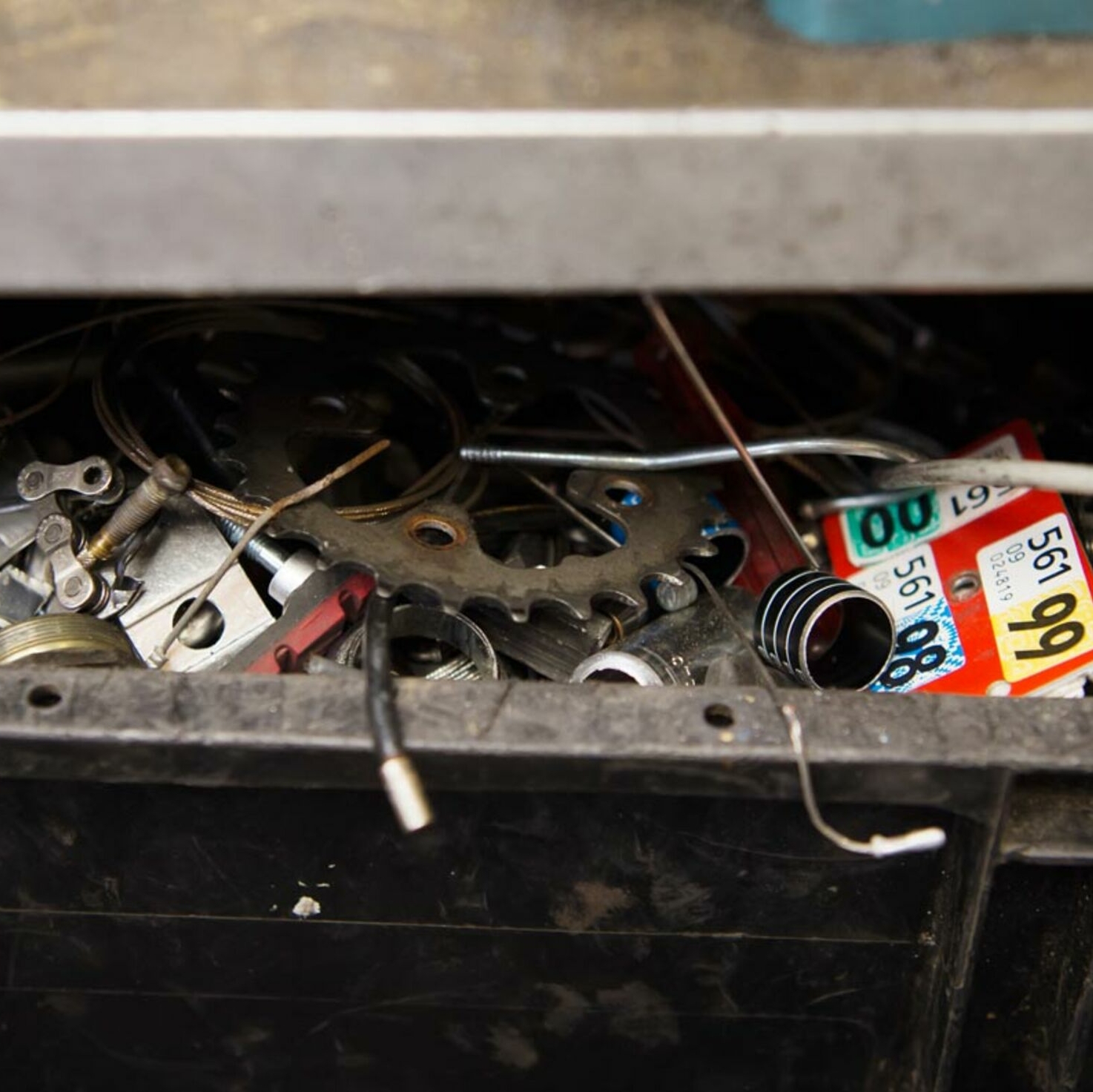 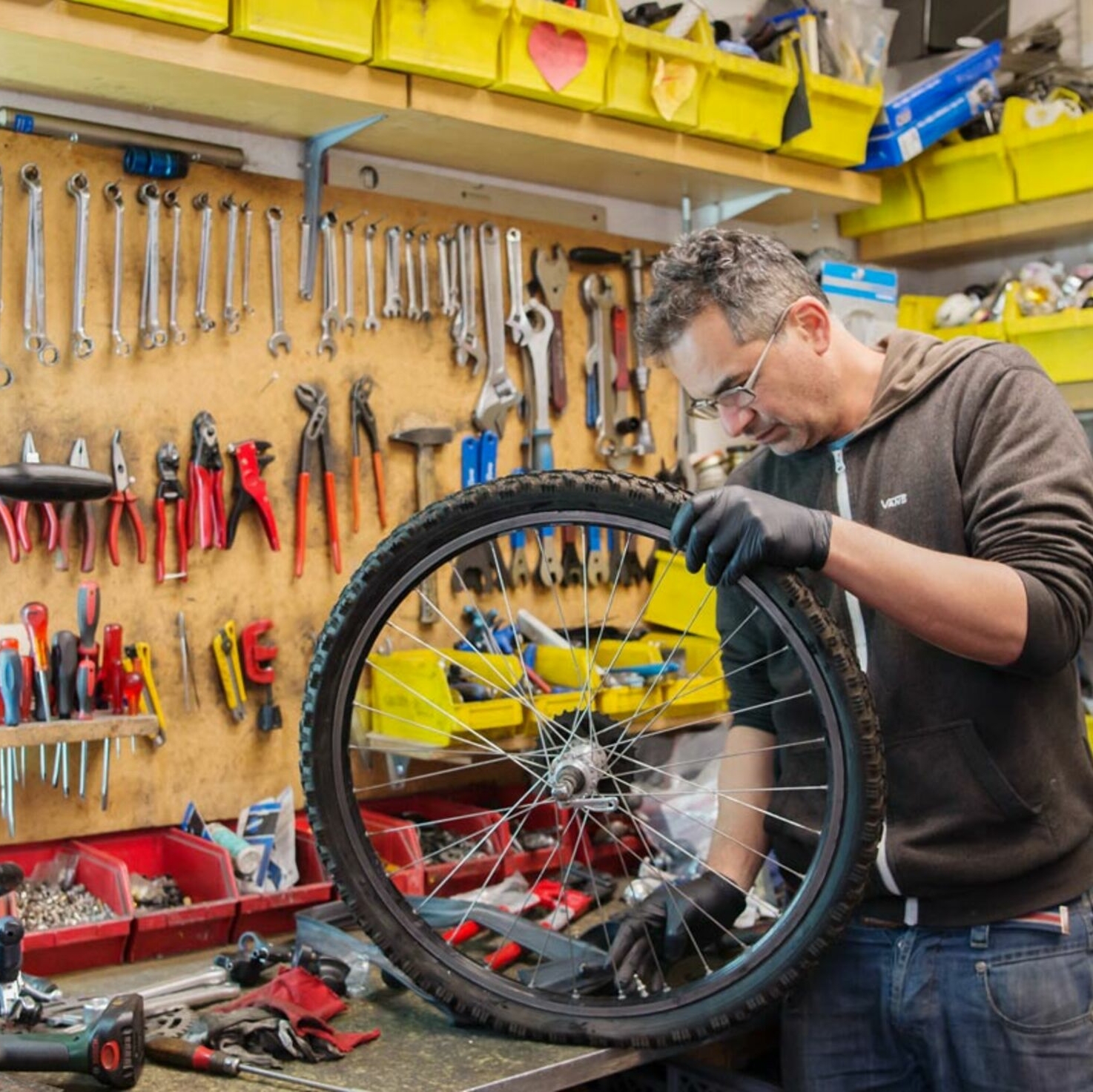 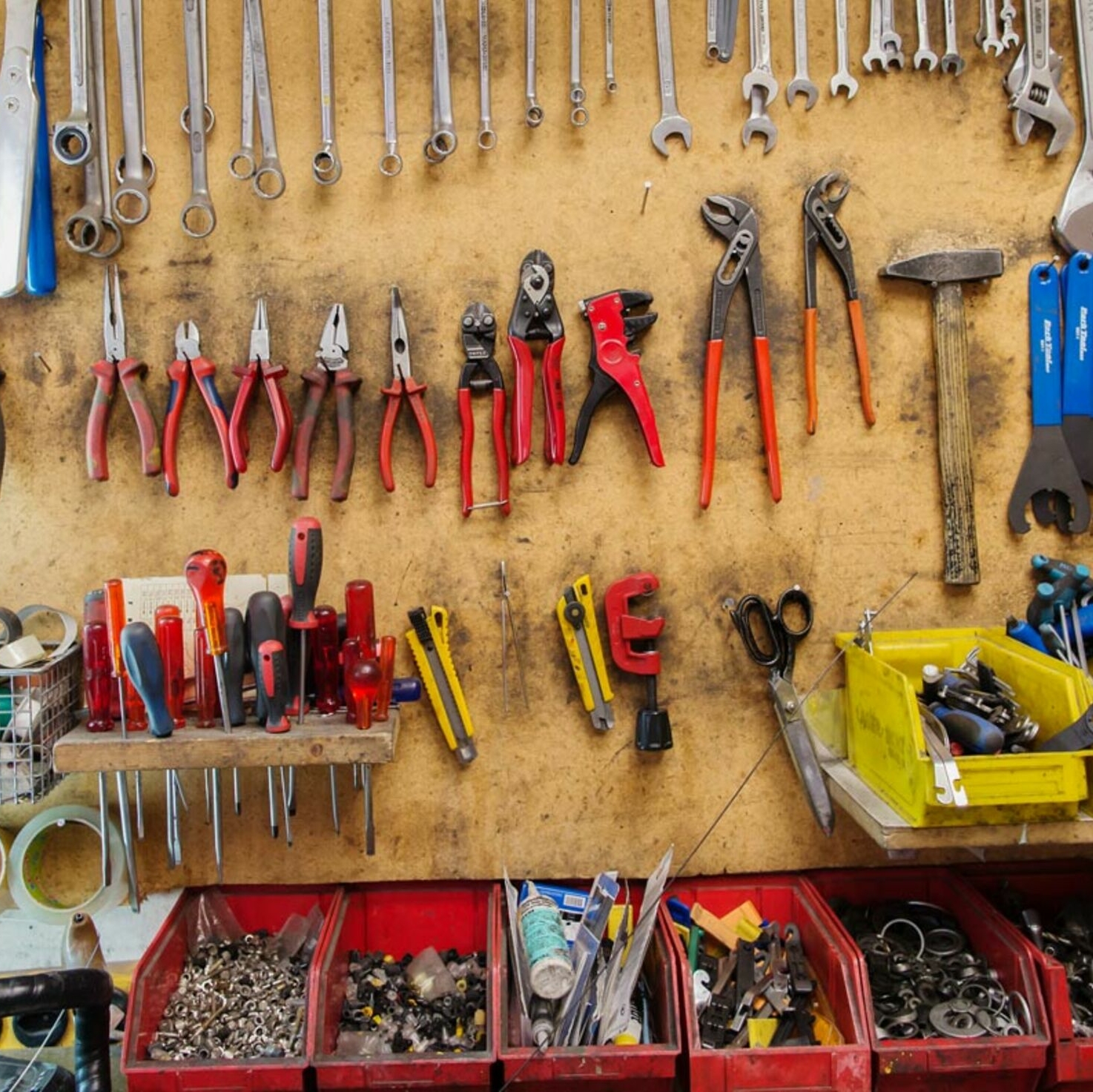 Enrico Mounayer has been running his bike shop on Neugasse for more than ten years. Straightforward craftsmanship prevails at Velocittà in Kreis 5 – there’s not an e-bike in sight.

‘The terrain in Zurich is very rough,’ says Mounayer, and so he spends most of his time in the shop mending bike tubes. However, he also sells bikes that he has assembled himself. The shop is full of examples of his weakness for old models with high-quality accessories.

Enrico Mounayer pulls up the cast-iron shutters of his shop. ‘Let’s make people happy,’ he says. As he clears up the bikes in front of the shop, a young man on an English bike rushes by. ‘A wonderful model – just look at the hub gear,’ says Mounayer. The 48-year-old bike mechanic has a weakness for old bikes: in his view, they’re more visually appealing than modern bikes, and tend to be of better quality. For him, bikes should be simple, sporty and classic, nothing more.

His passion for the handmade is also on display inside the shop, lit this morning by the autumn sunshine. The window displays are full of old racing jerseys, while sports shoes from the sixties sit unused in the corner. In between are heavy lamps that make you wonder how they could ever have hung from a bicycle. Inside, it smells like chain oil. The organised chaos of the workshop is often difficult for outsiders to make sense of.

In 2006, Mounayer turned his hobby into a profession. He had begun mending his friends’ bicycles at home while studying at the University of Teacher Education, using the money to finance his studies. But the idea for his own workshop only came to him later. Working with his hands sounded more appealing to him than only working with his brain, he says. The best thing about bikes: ‘The mechanics are understandable. You can learn for yourself how everything works.’

Time was on Mounayer’s side when it came to making the decision to turn away from teaching and towards the wrenches. Bicycles are a permanent part of Zurich, and what’s more, a trend away from the idea of bikes as nothing more than useful commodities began back in the nineties. It started with bike couriers and a kind of vintage culture, with racing caps and visits to the three-day races at the open circuit in Oerlikon.

‘For me, a bike is something powered by your own muscles.’

Later, they were joined by hipsters with a fetish for fixed-gear bikes, meaning bikes with only a single gear and no back pedal brake. ‘If someone wants that, why not?’ says Mounayer. ‘But at some point, most of them come back to the classic bike with saddlebags and mudguards.’ And then there are the aesthetes like Mounayer. E-bikes are the only kind that he can’t warm to. ‘For me, a bike is something powered by your own muscles,’ he says. This seems to be the essence of his entire attitude – and his daily work.

When he talks about Sturmey Archer hub gears, his eyes light up. He enthuses about how these typical three-gear hubs last up to 60 years, and because the chain isn’t worn down by the chainline, it also doesn’t wear out.

And if everyone took advantage of this kind of quality, wouldn’t he run out of work someday? Mounayer laughs. There would still be enough to do. ‘The terrain in Zurich is very rough,’ he says. He changes bike tubes several times a day. His maxim that you can bring your bike in and collect it on the same day also applies to other kinds of repairs.

Mounayer also has dozens of used bikes on offer. He assembles them himself and sells them for reasonable prices. He buys the parts from anywhere and everywhere and stores them in a cellar. However, it’s not often easy for his customers to decide to scrap their old bicycle and buy a new one. ‘People hang on to their loyal companions,’ he says. That has nothing to do with reason; it’s down to a deep connection. ‘Zurich people love their bikes,’ he says. And that's why Zurich people love him.