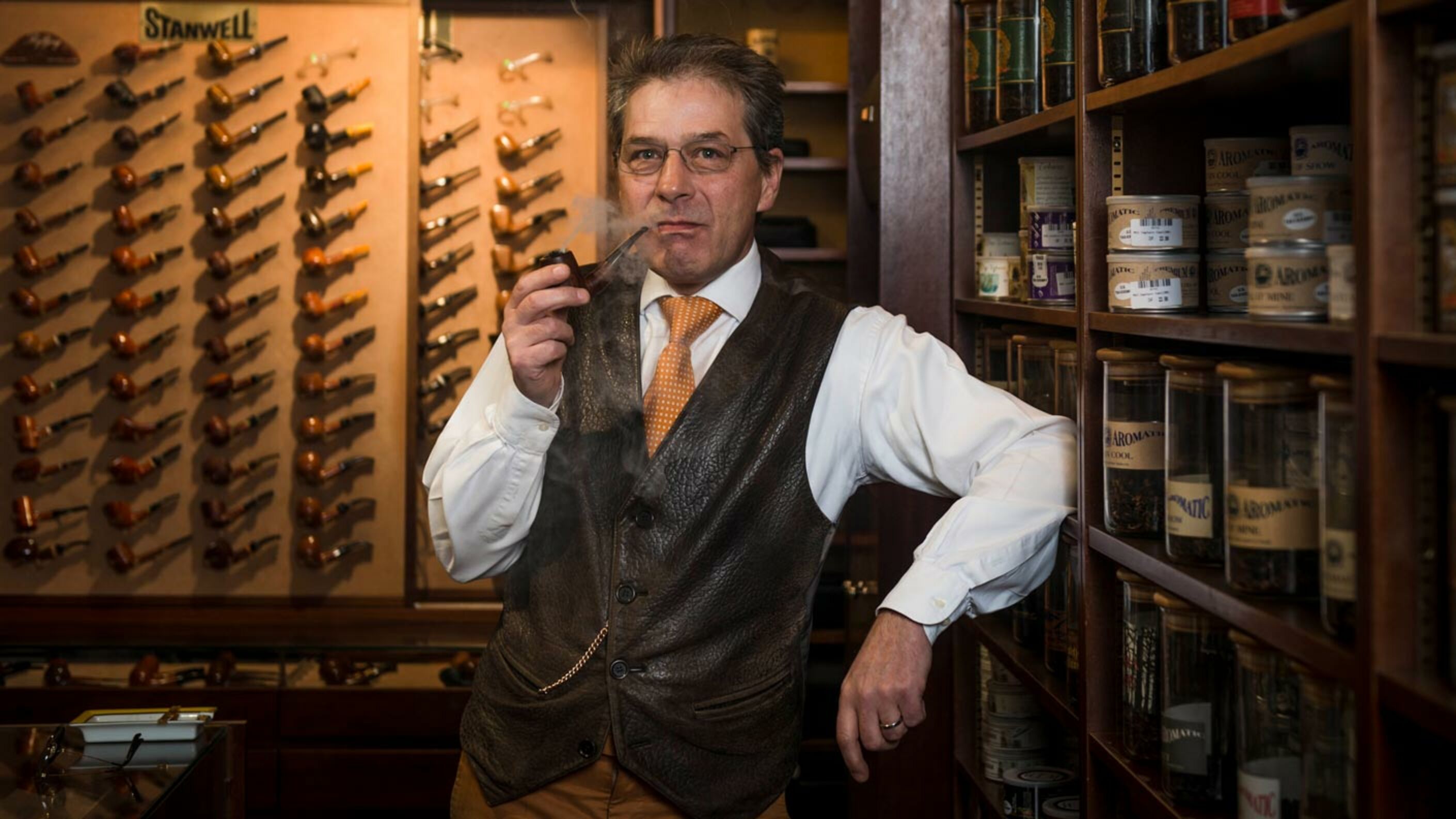 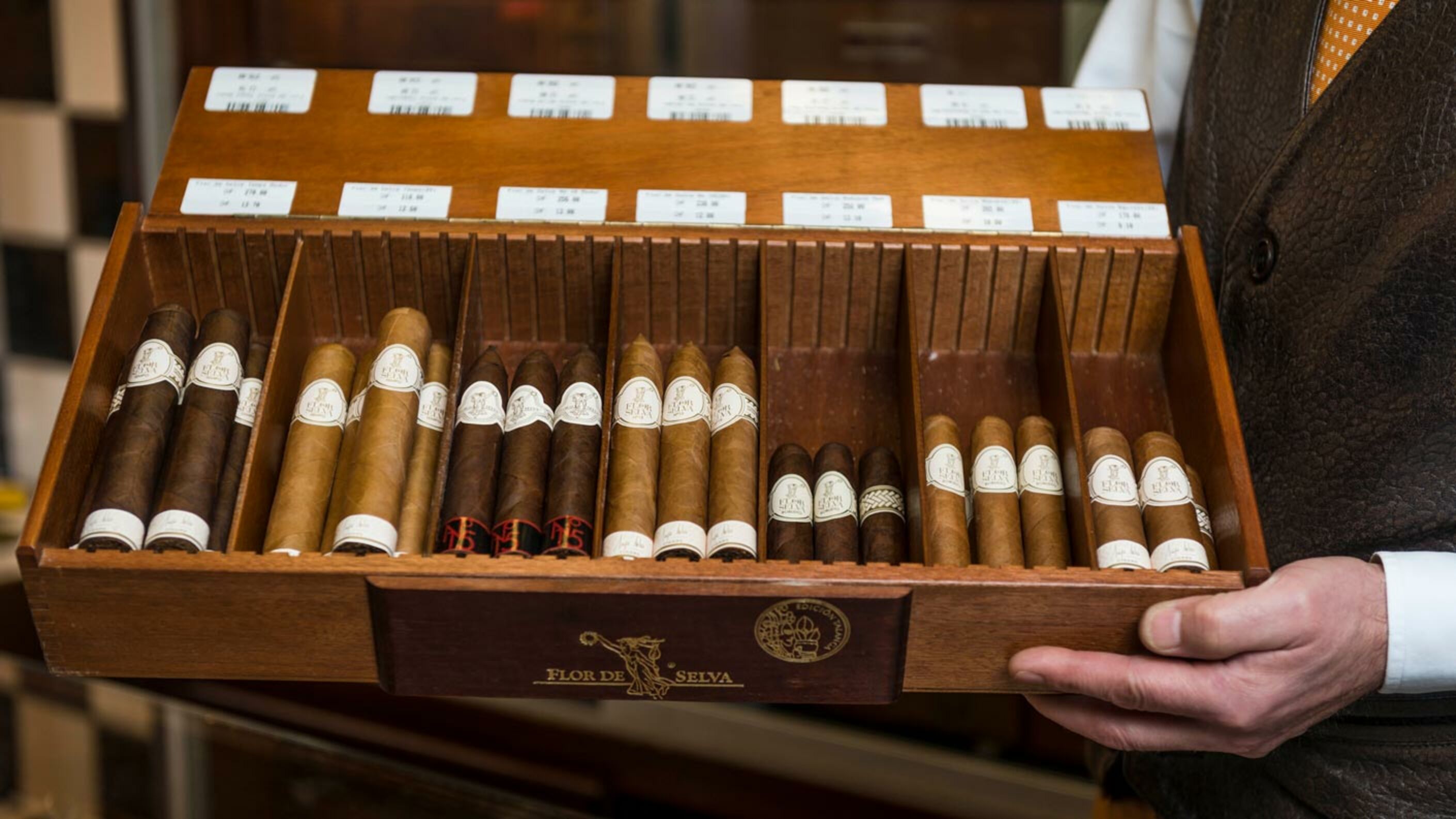 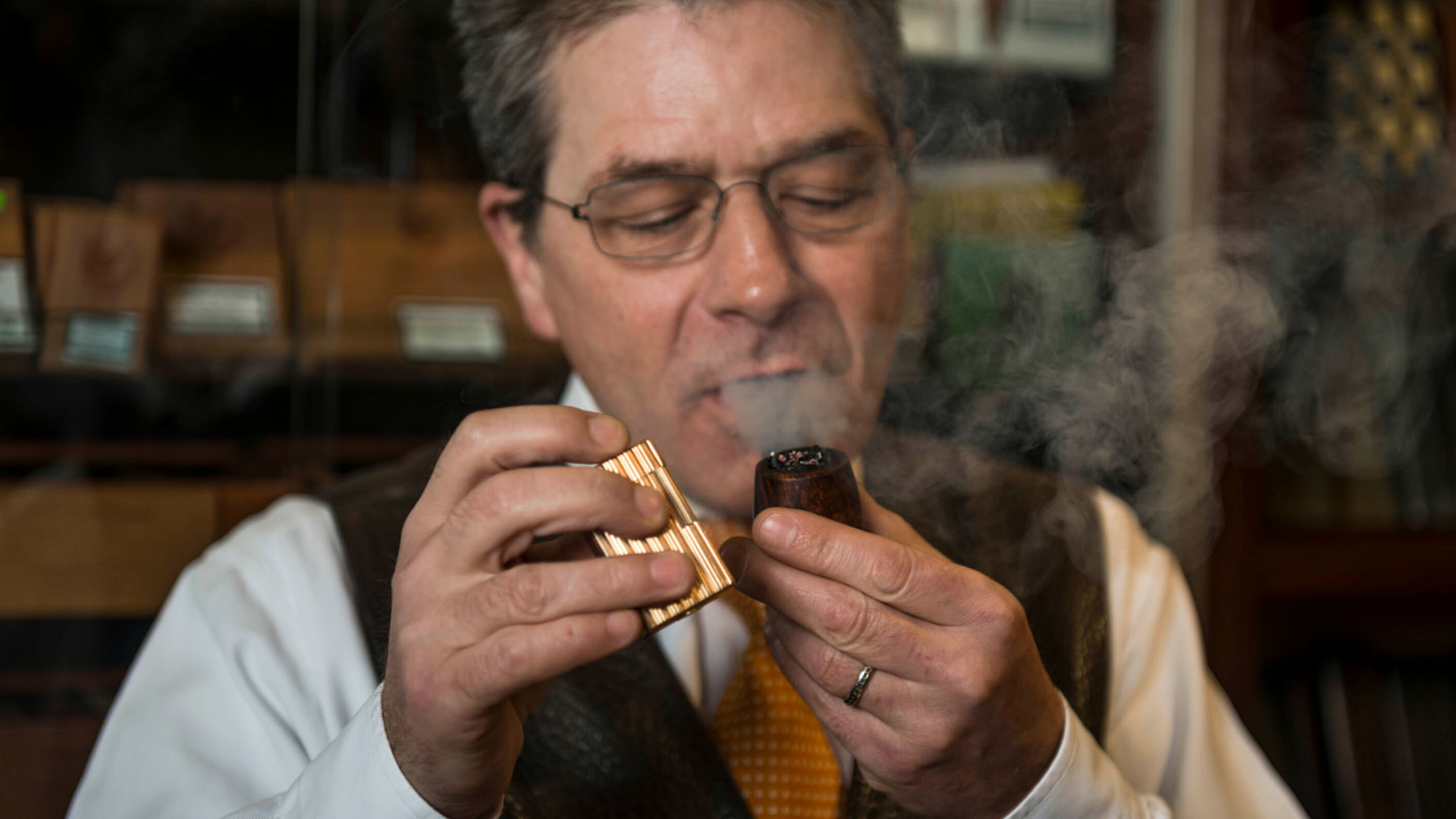 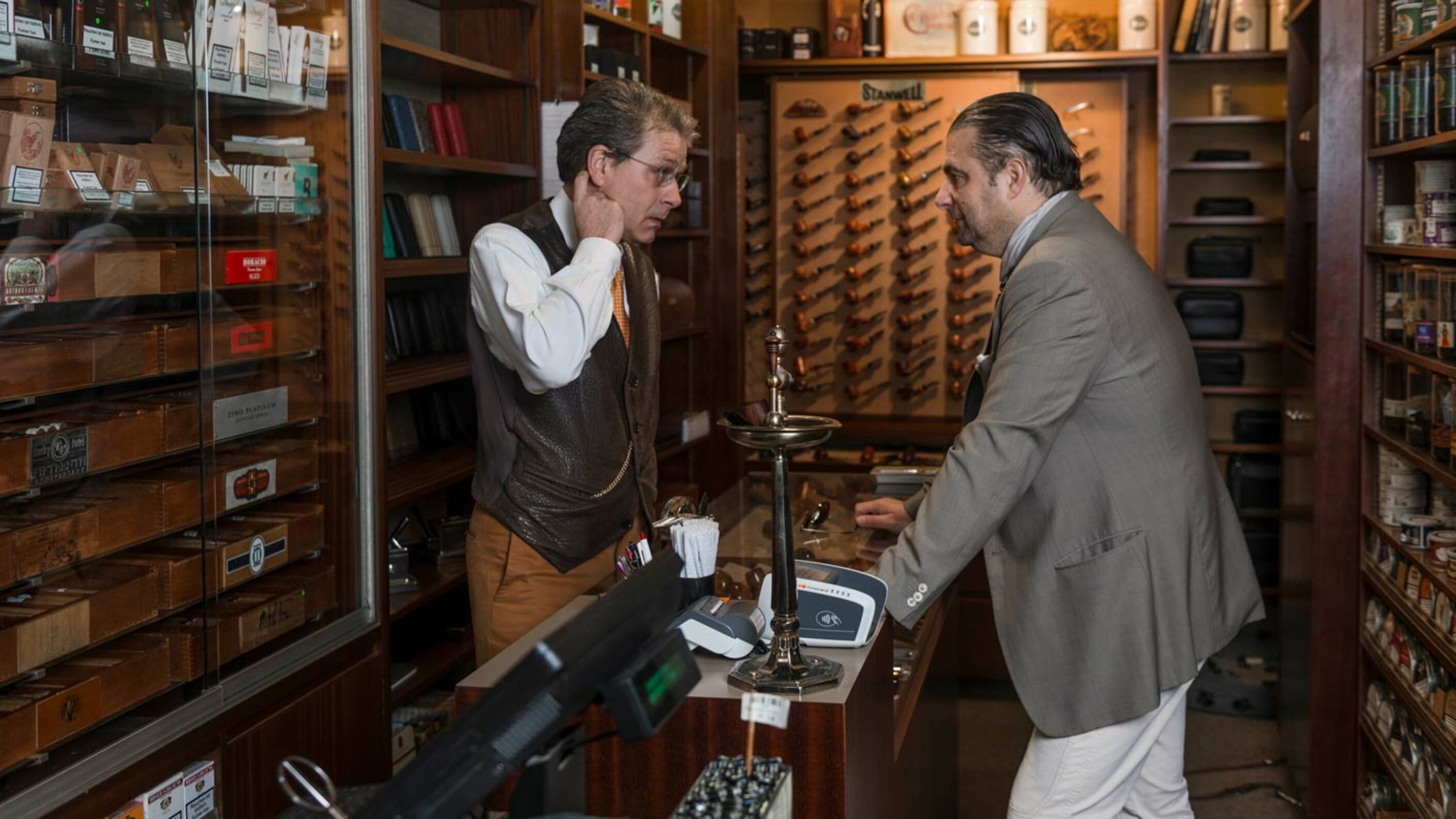 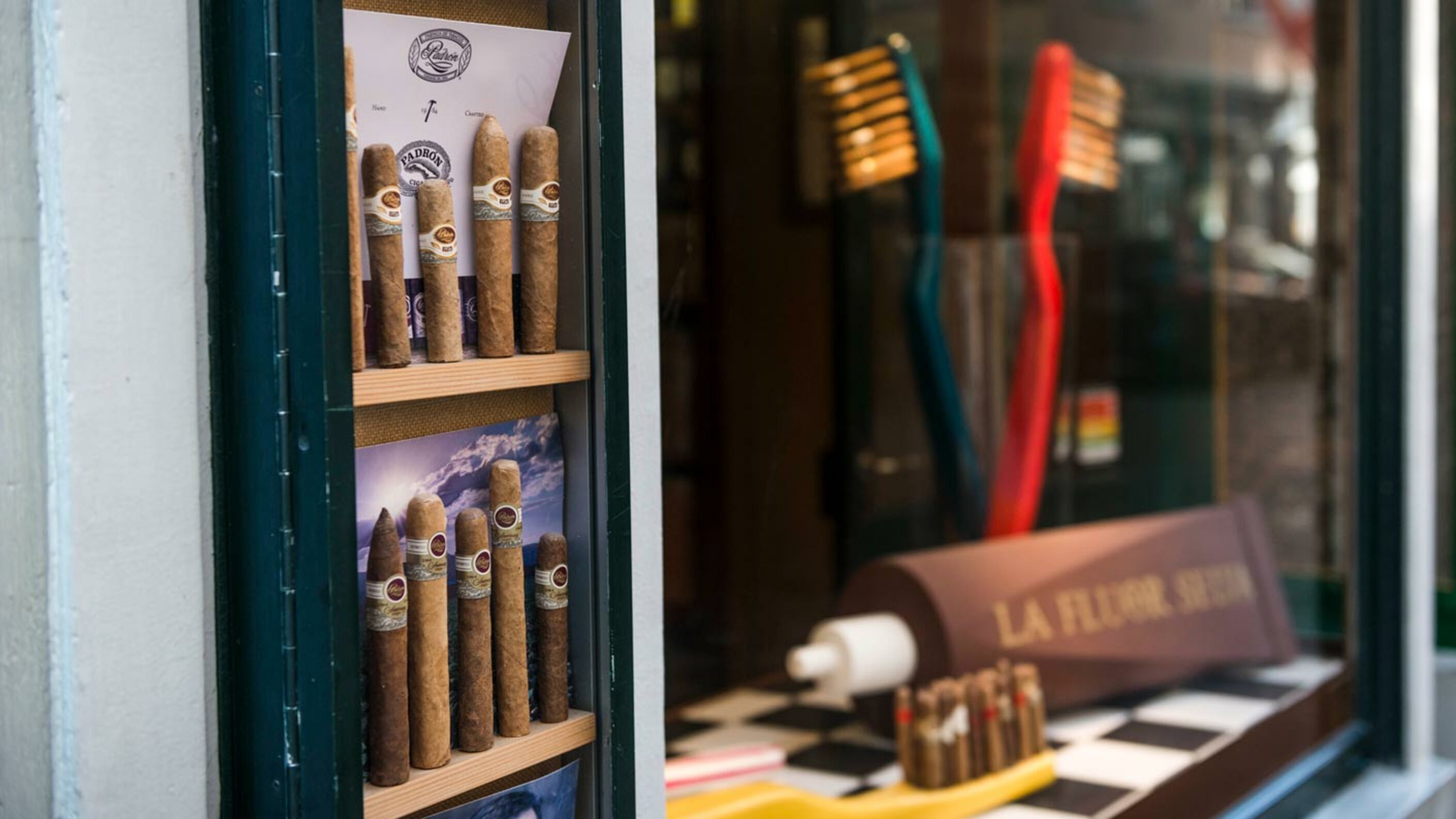 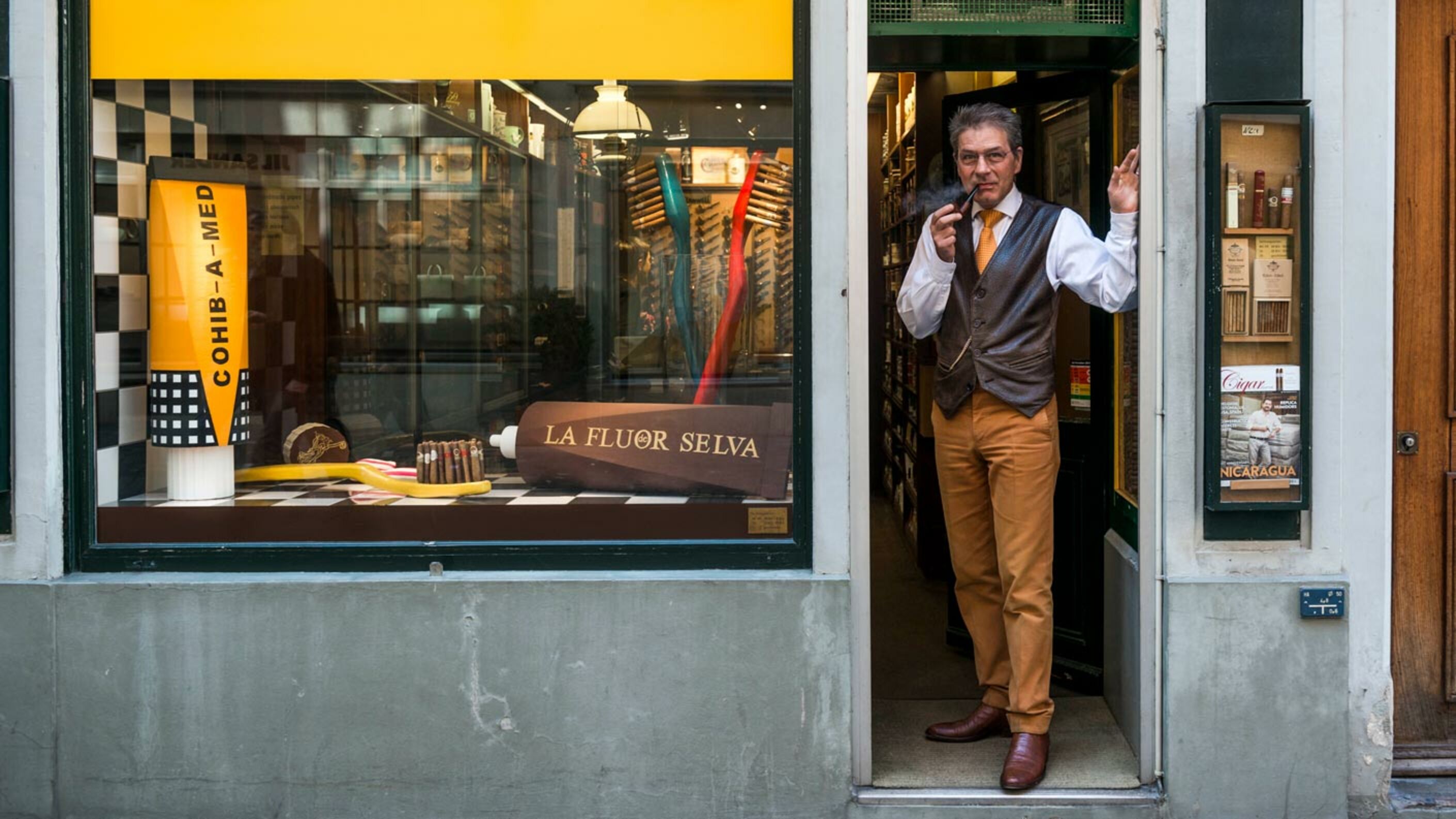 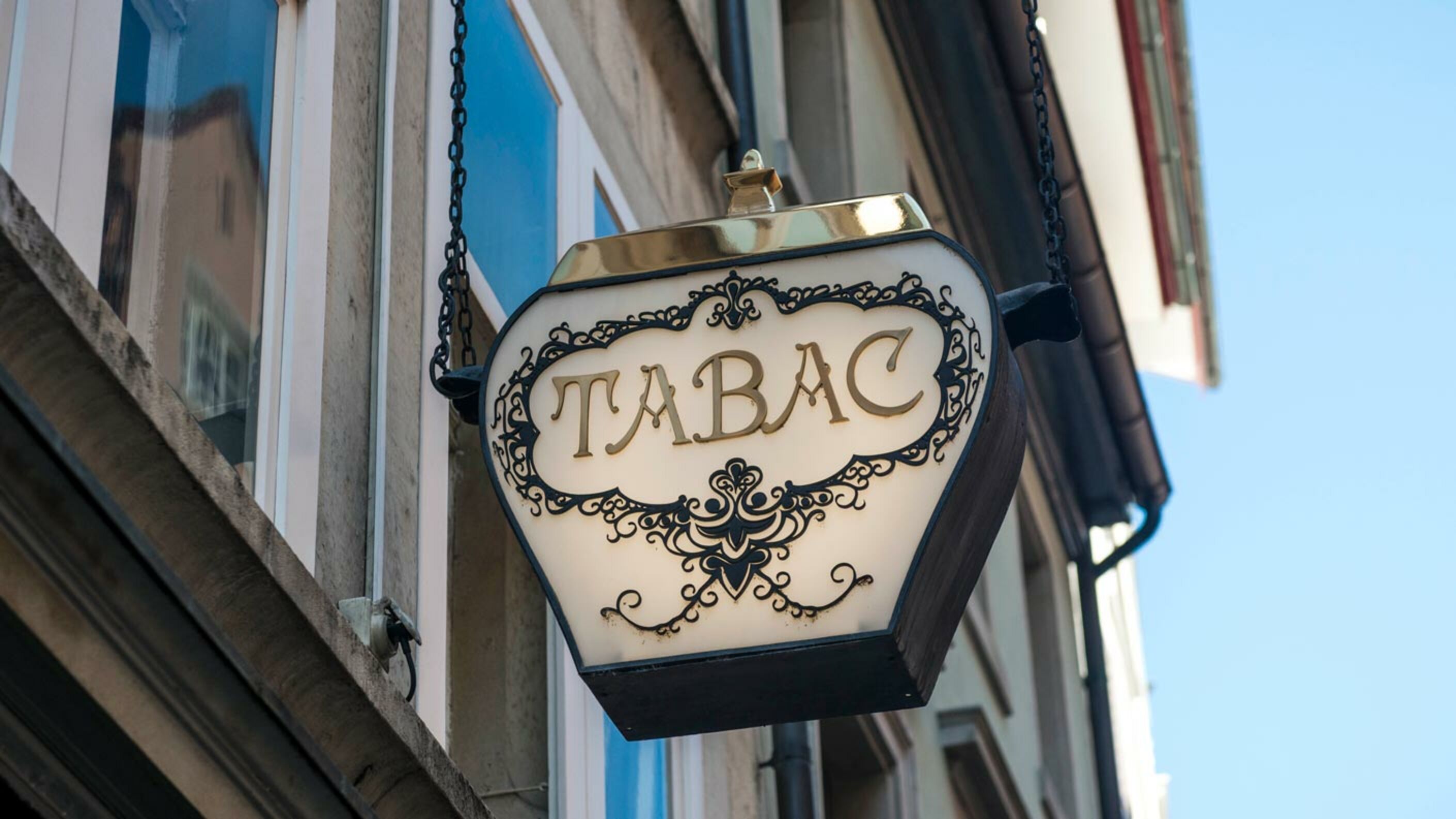 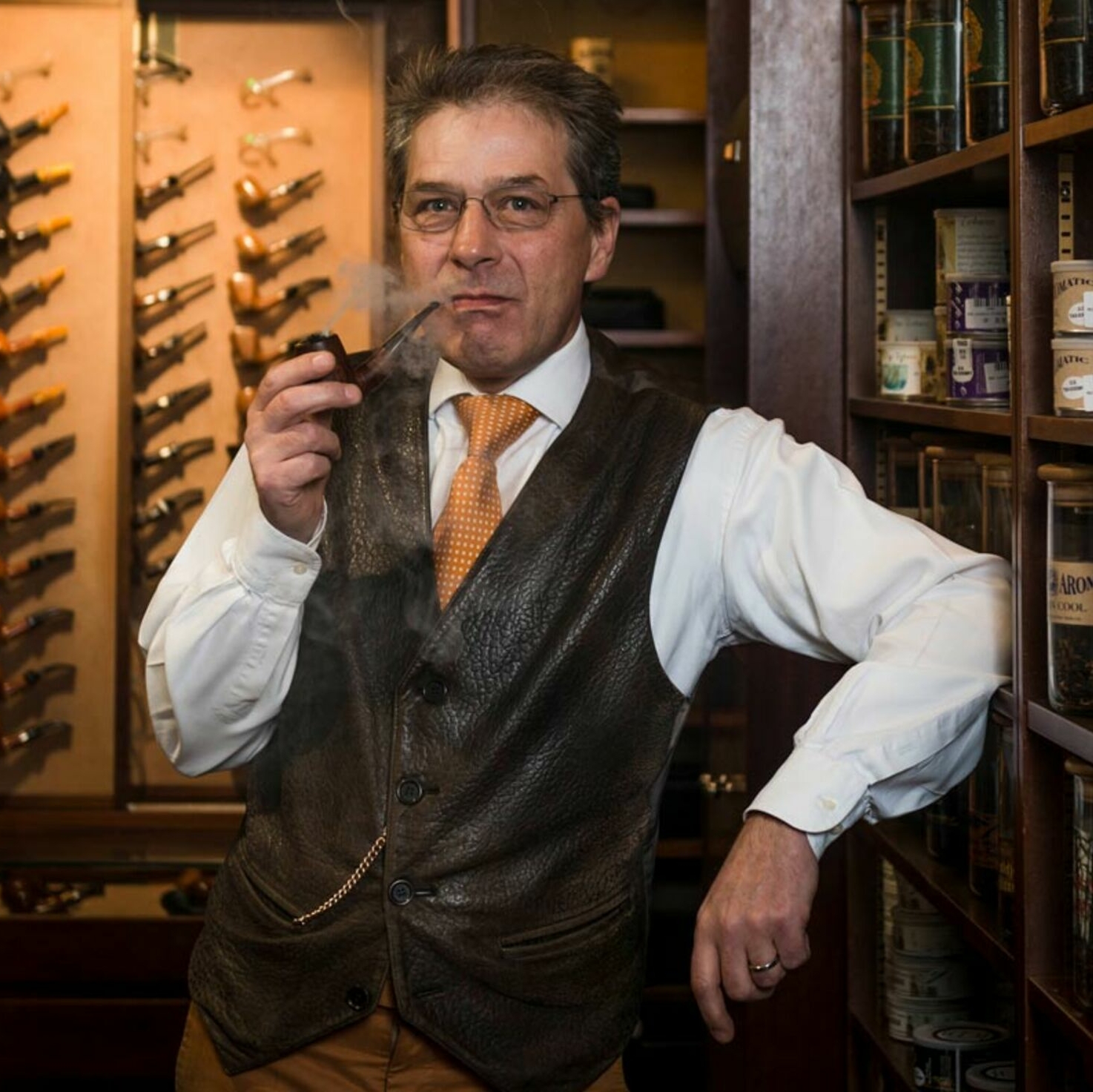 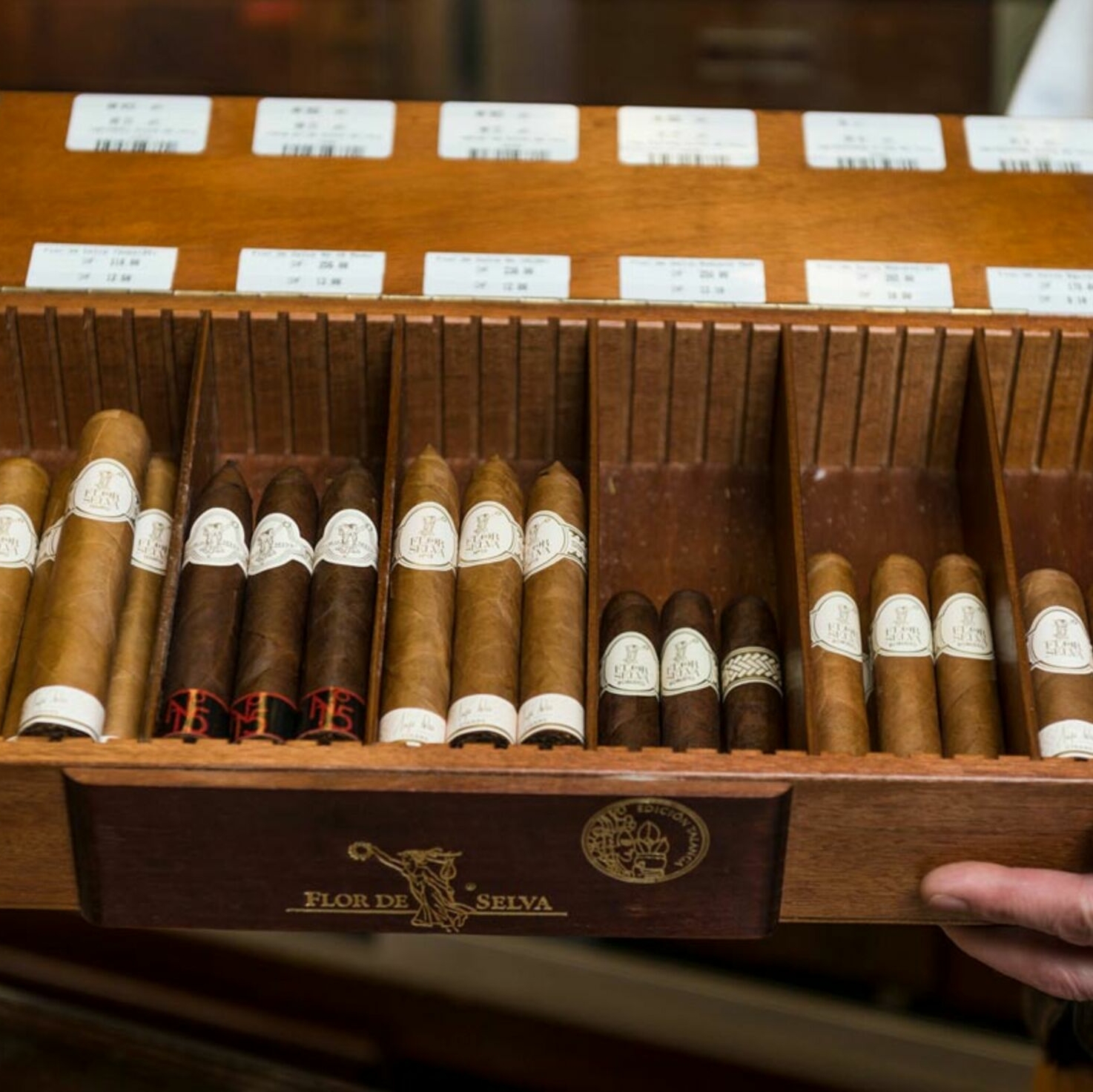 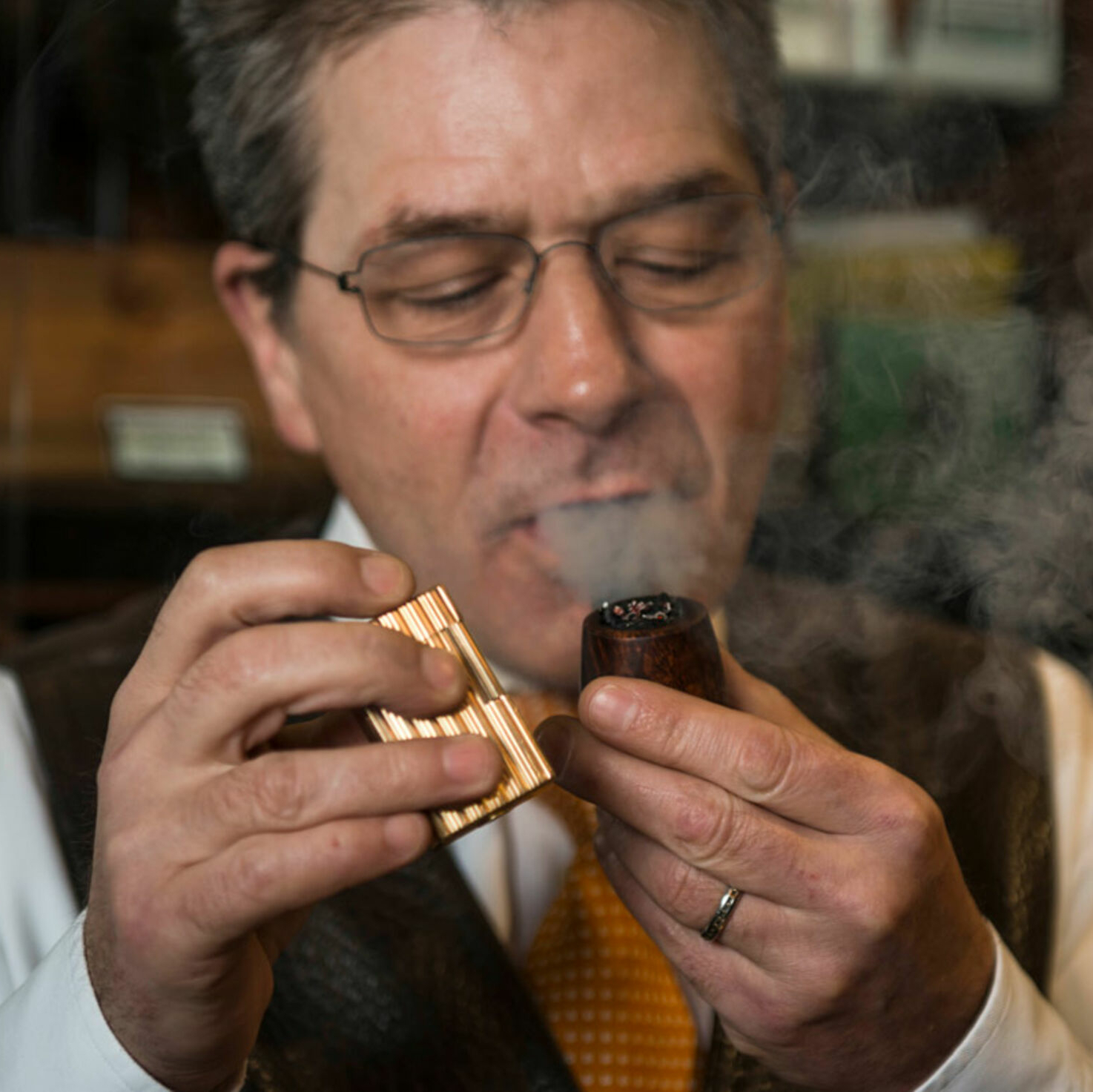 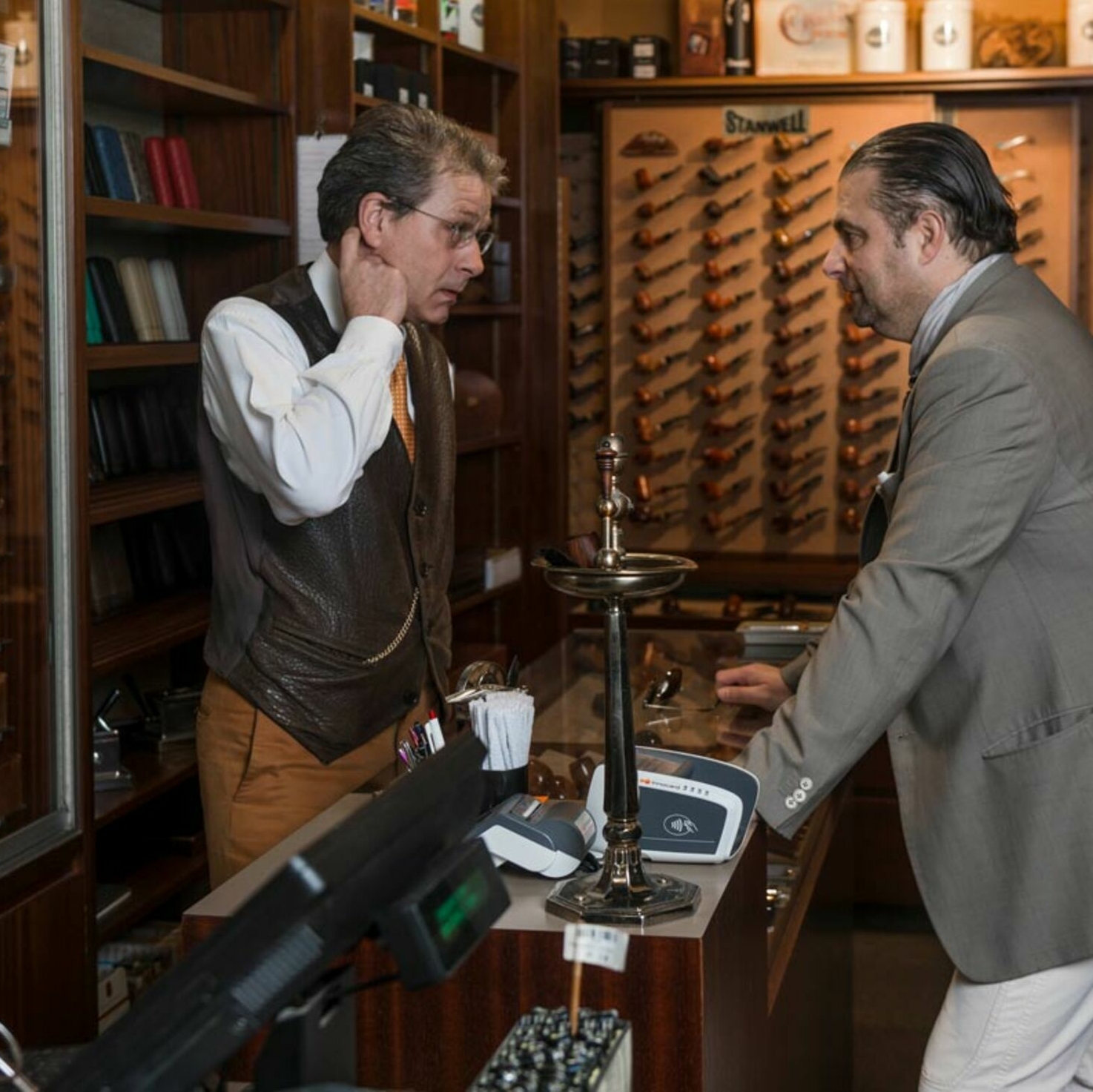 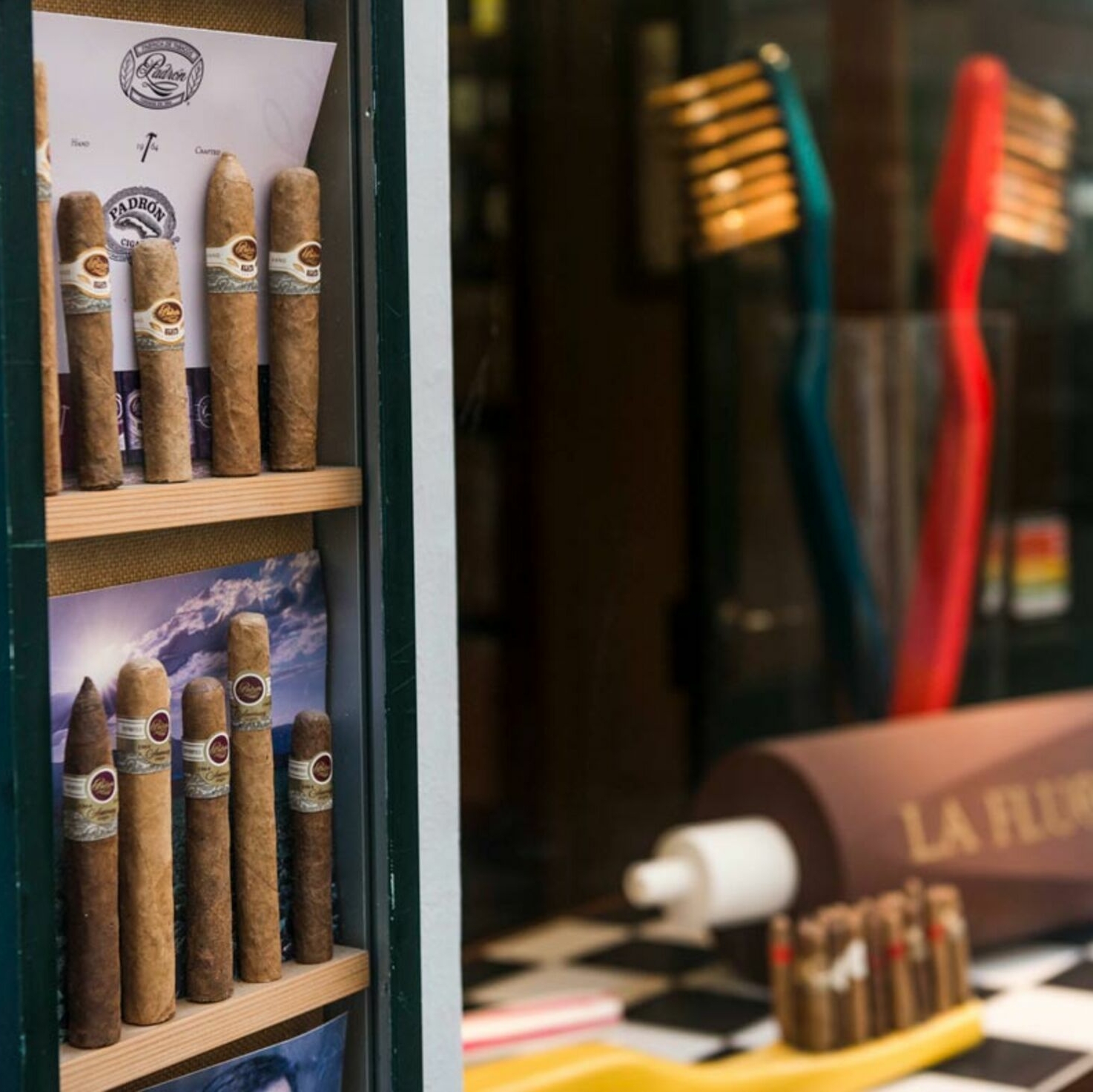 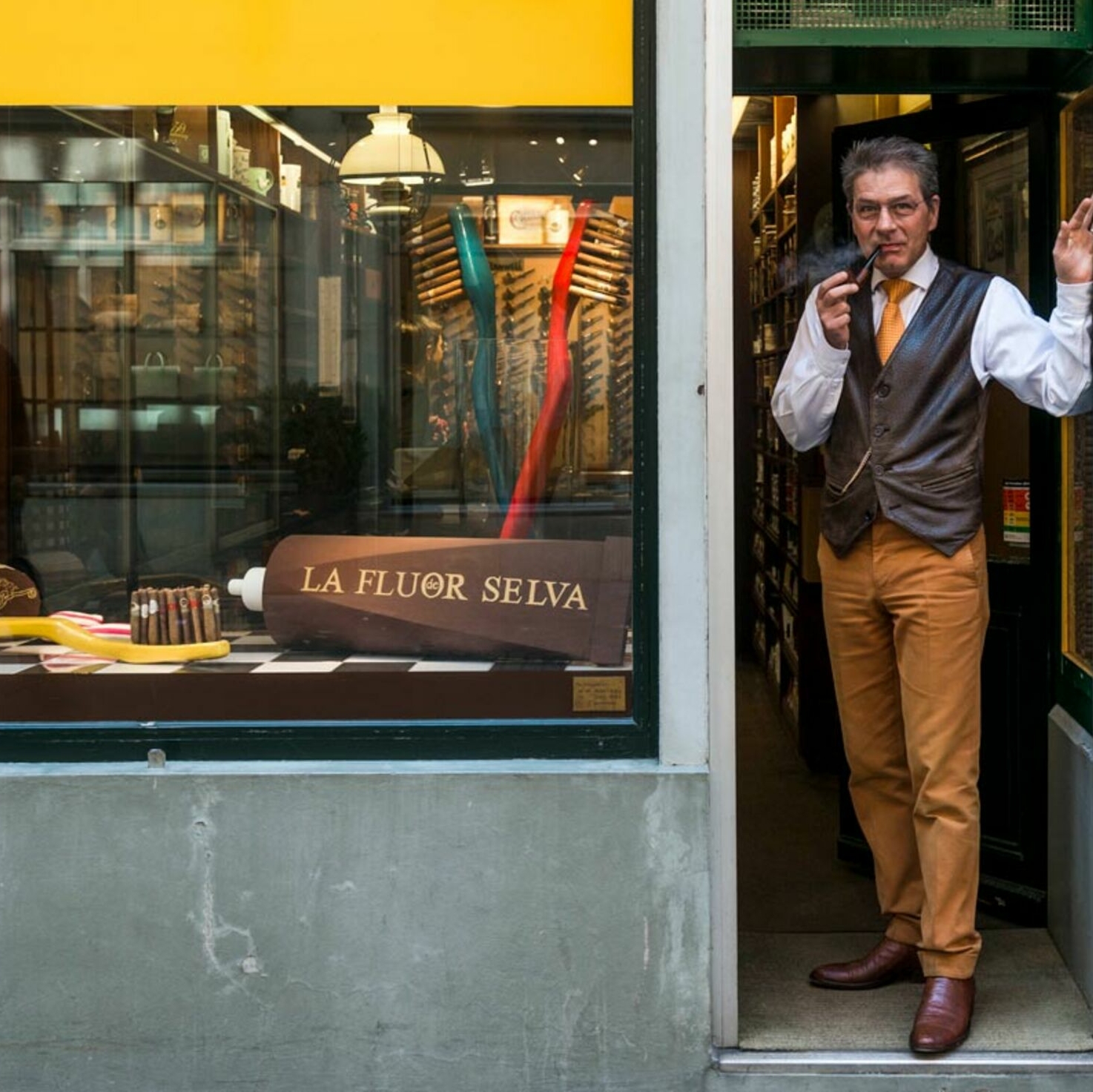 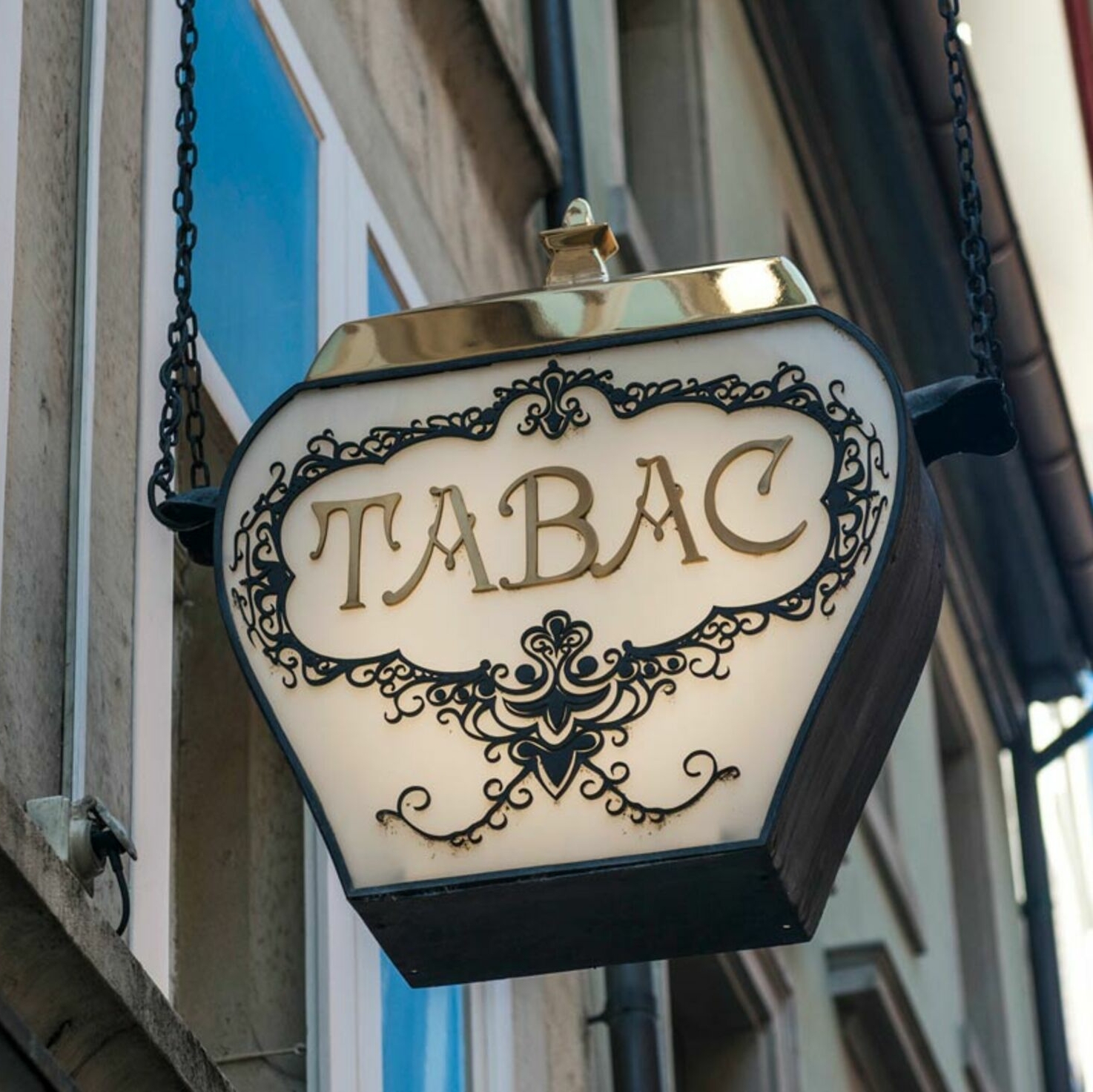 His business is going up in smoke – but for him, that’s a good thing. René Wagner has been selling pipes and cigars from his shop on Storchengasse for 30 years.

René Wagner stands behind the counter, stylishly dressed in a dark jacket with a gold watch chain. He looks timeless: a bon vivant who knows how to enjoy life. And that’s exactly his business. The Zurich native has been selling top-quality pipes, tobacco and cigars for over 30 years, and his 19 m2 sanctuary at Storchengasse 19 is home to a hoard of treasures.

Towers of tins containing more than 300 different types of tobacco reach to the ceiling. An equal number of cigars nestle in boxes, waiting for buyers. Wagner would have long since lost track of everything if he didn’t have a computer: ‘The range is too large. I have to fight to find room for all the new products,’ he says with a slight smile.

And those products don’t come from just anywhere: Wagner is well-known in the industry. He has built up a worldwide network of contacts and maintains personal relationships with a large number of manufacturers; for example, Padrón, a Nicaraguan company that produces top-class cigars. ‘I know their whole family,’ says Wagner. So the latest trends always make their way to Storchengasse 19. The 61-year-old tries them out and sells whatever he thinks works. ‘If the product has the right quality and aroma, I add it to the stock,’ he says, puffing a thick cloud of smoke into the air from his curved pipe.

‘How many do you smoke a day?’ He shoots back: ‘I don’t smoke them, I enjoy them!’ Enjoyment is allowed. Smoking has fallen into increasing disrepute in recent years. When Wagner entered the business in the eighties, the environment was quite different: smoking was a part of polite society. People puffed away in bars, offices and on TV as though their lives depended on it. Back then, when everybody smoked, Wagner hardly touched tobacco: ‘I was a dedicated boxer when I was younger, which meant I was less interested in the stuff,’ he recalls.

And this was despite the fact that he grew up around it: his mother opened the shop in the seventies and he started helping out over lunchtime as an 18-year-old so that she could eat in peace. ‘I always hoped that nobody would come in! I didn’t have a clue about the products.’

His fascination developed later, during a motorbike trip to Denmark – the heartland of pipe manufacturing. Wagner visited the best-known manufacturers to learn about the craft. It became clear to him: ‘These aren’t just pipes. They’re sculptures; true artworks!’ 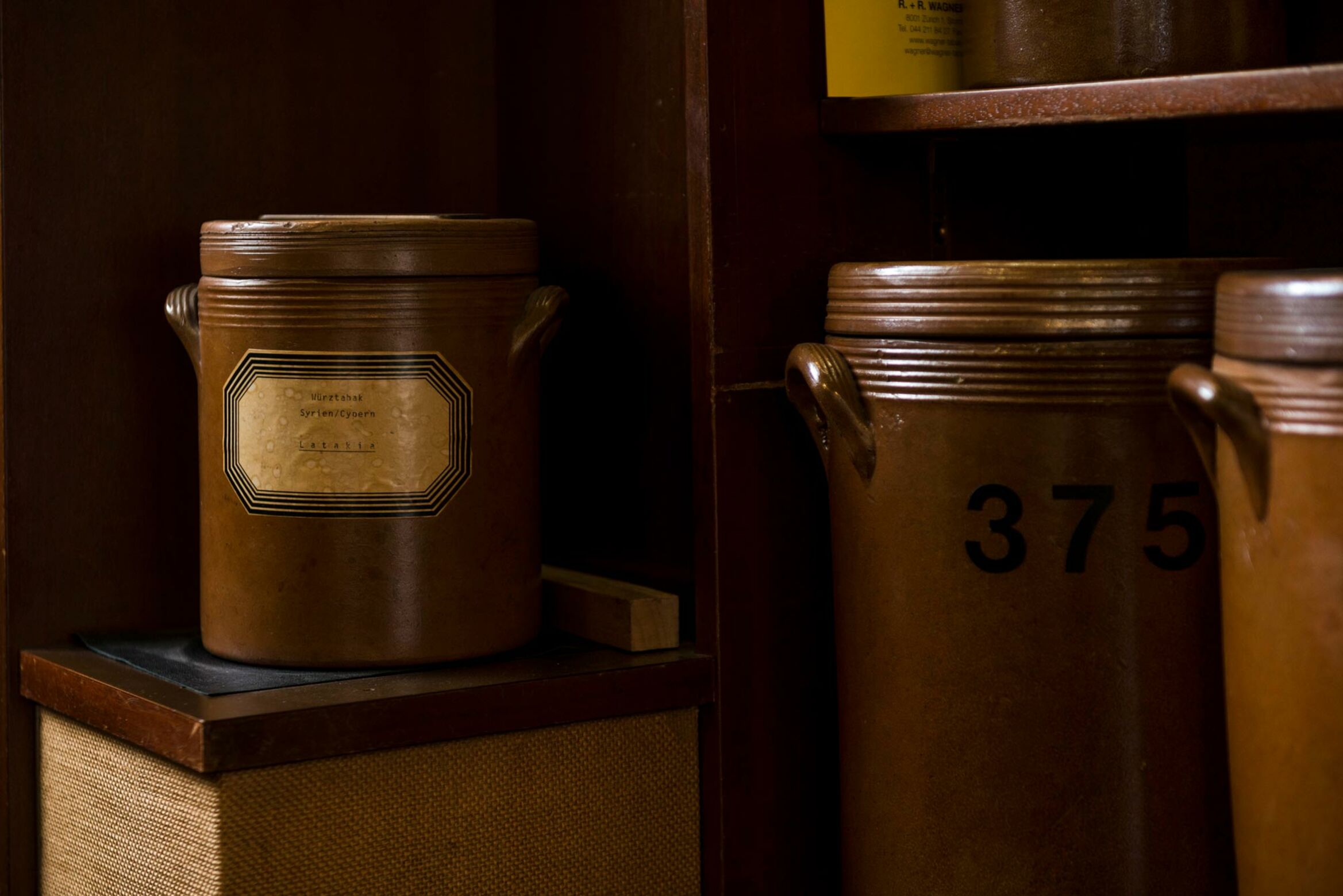 different types of tobacco reach to the ceiling.

The shop bell chimes and a young woman enters. Wagner’s dog Rex, who’s been here so long that he’s almost part of the furnishings, shifts in his basket. Wagner greets her amicably and produces the tobacco she’s looking for. I’m a little confused: I was imagining his customers as old men with suits and paunches – bank director types. ‘Totally wrong!’ Wagner exclaims. He says it’s nothing more than a myth: ‘I serve people from all walks of life here.’ Seasoned smokers and novices, students and street cleaners. He’s also had plenty of well-known personalities in his shop, but Wagner won’t name names: ‘I’m sworn to absolute secrecy on that score.’ 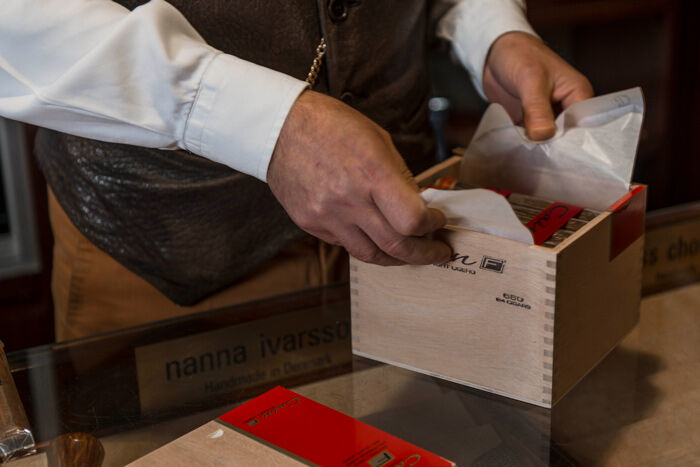 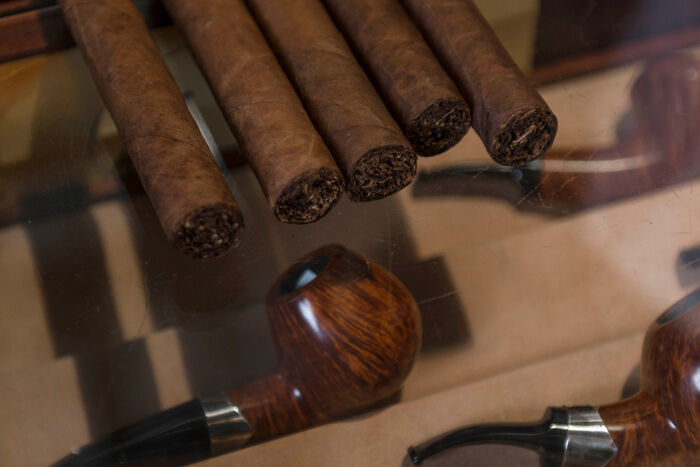 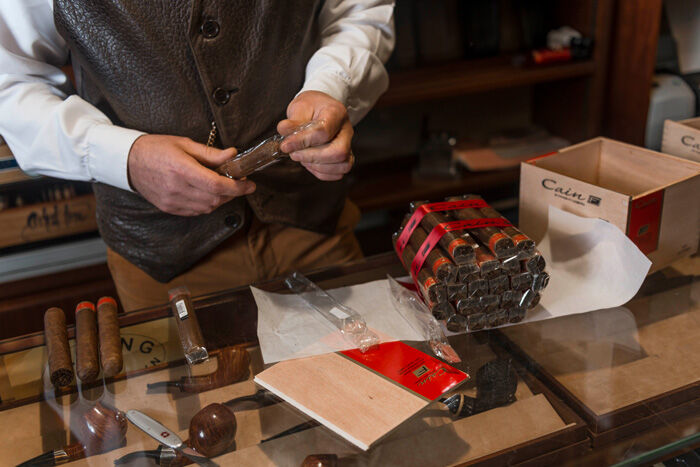 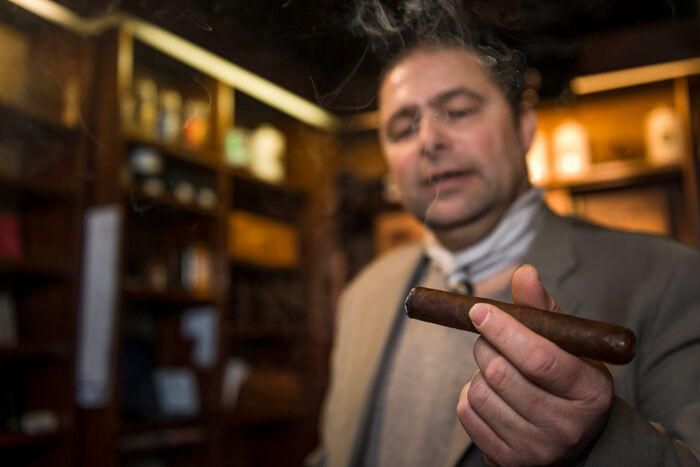 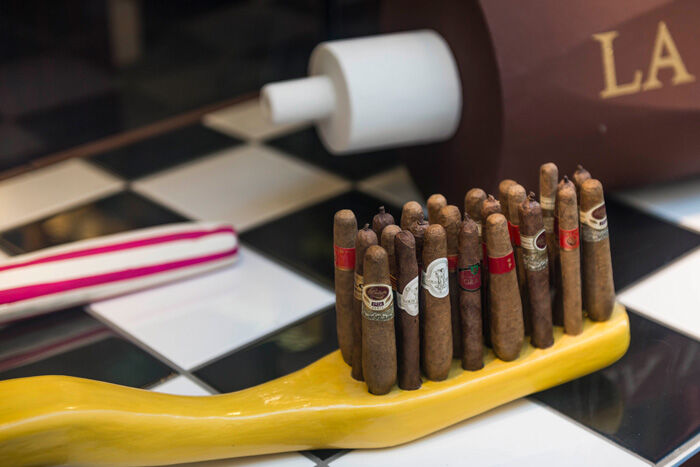 In an era of ever stricter regulations for smokers, he puts the success of his shop down to human nature. ‘A good cigar or good tobacco is like a glass of wine. It’s pleasure. It’s life. And it’s always brought people together.’

He puts the success of his shop down to human nature.