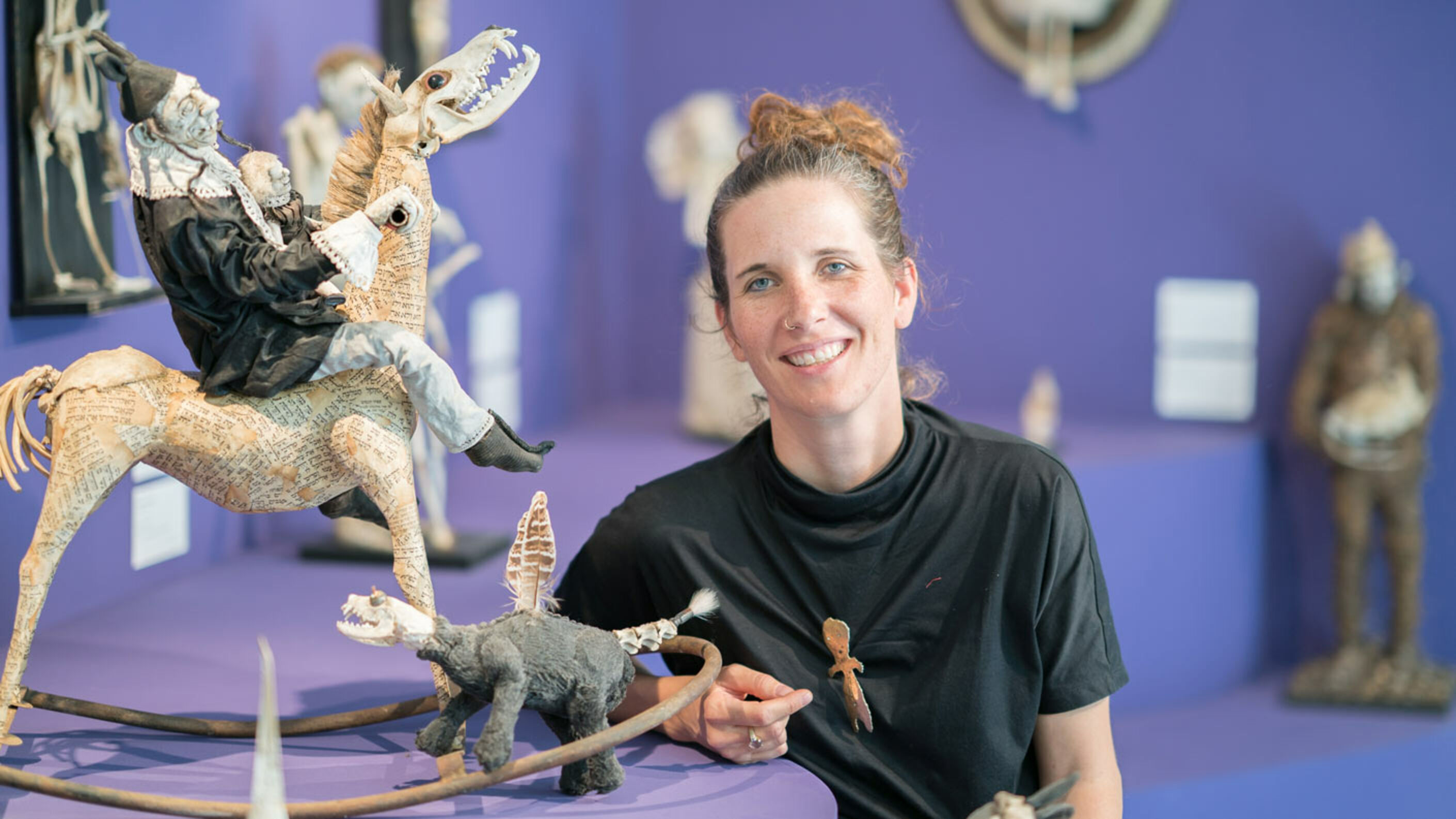 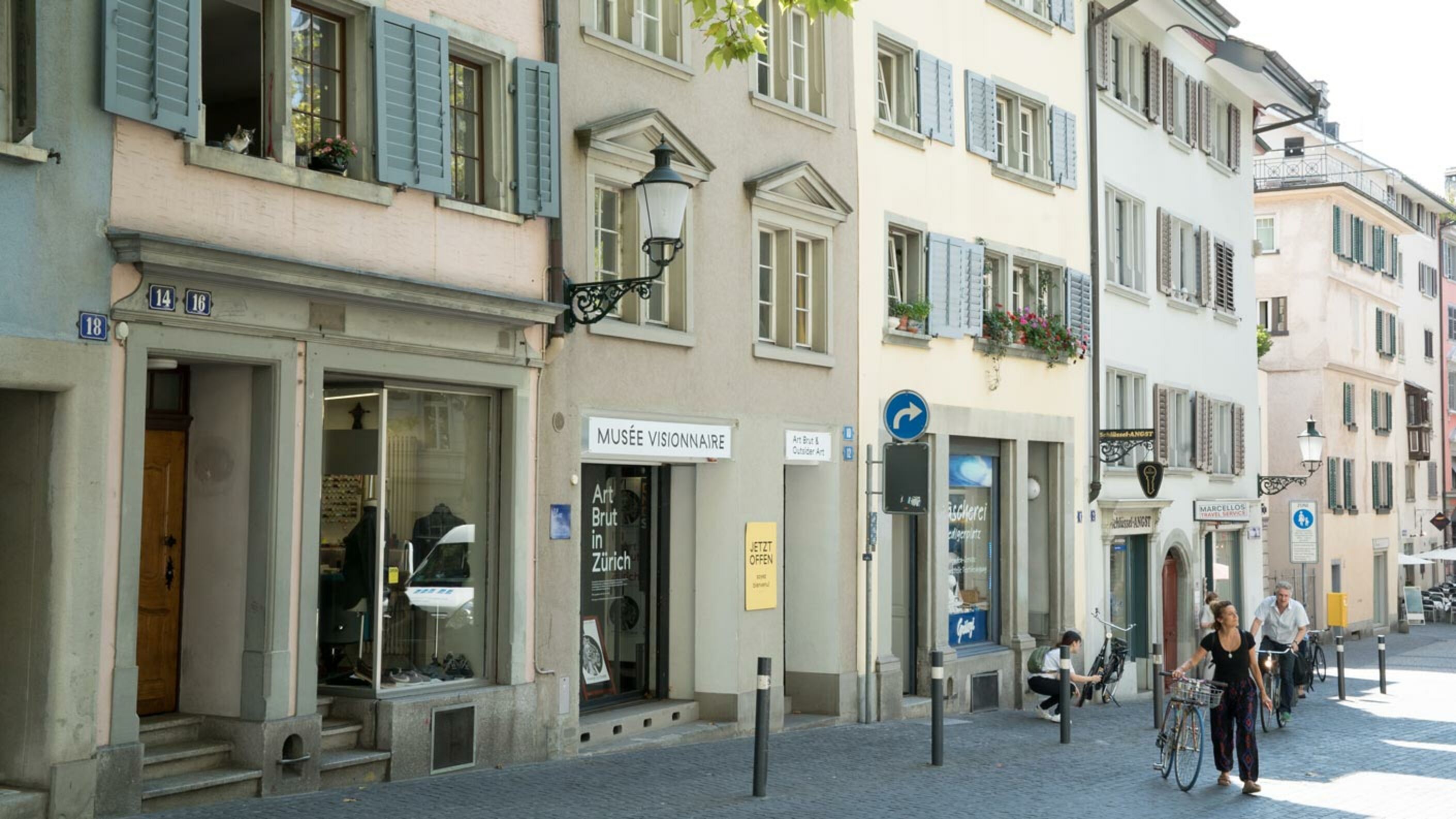 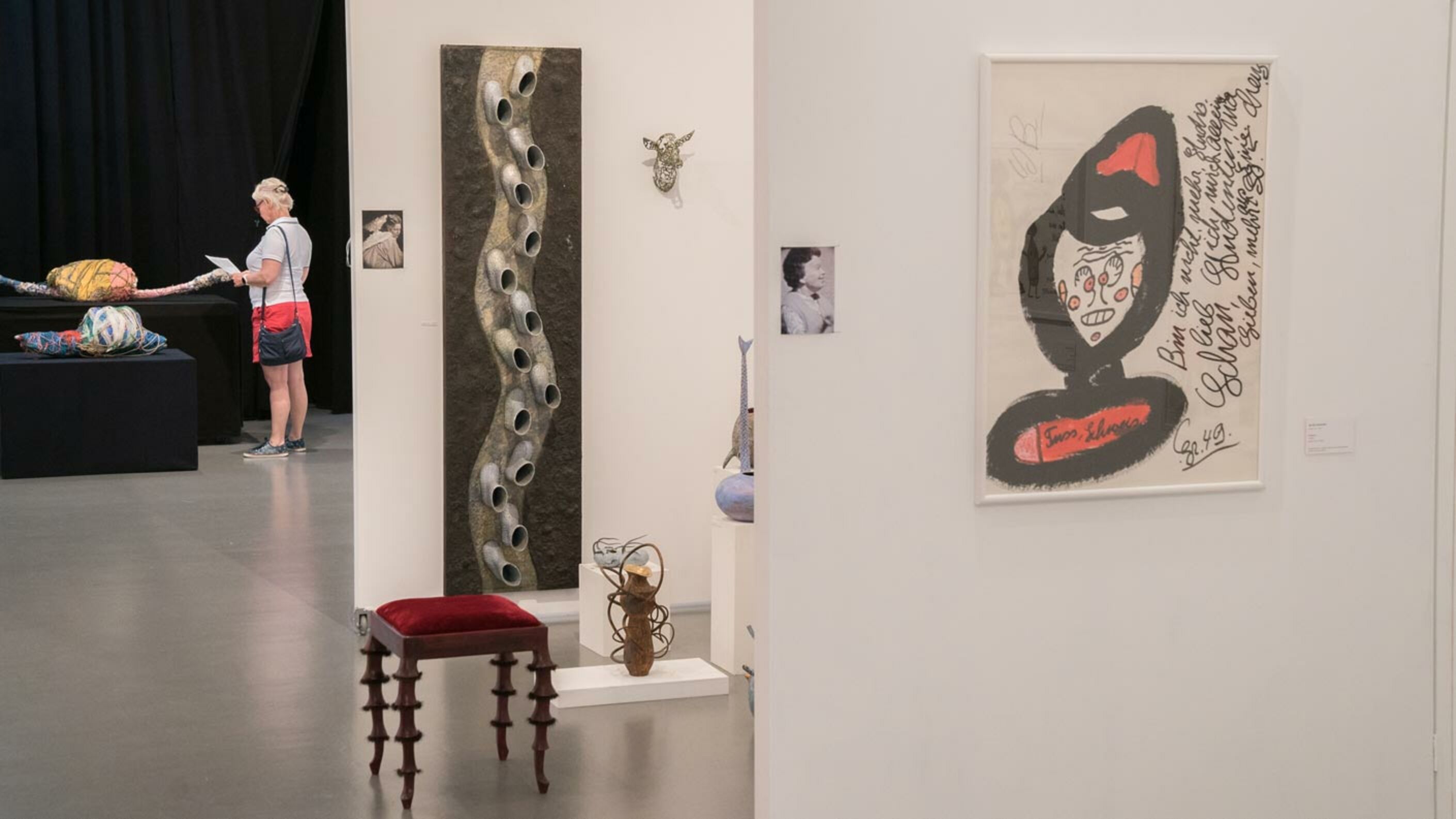 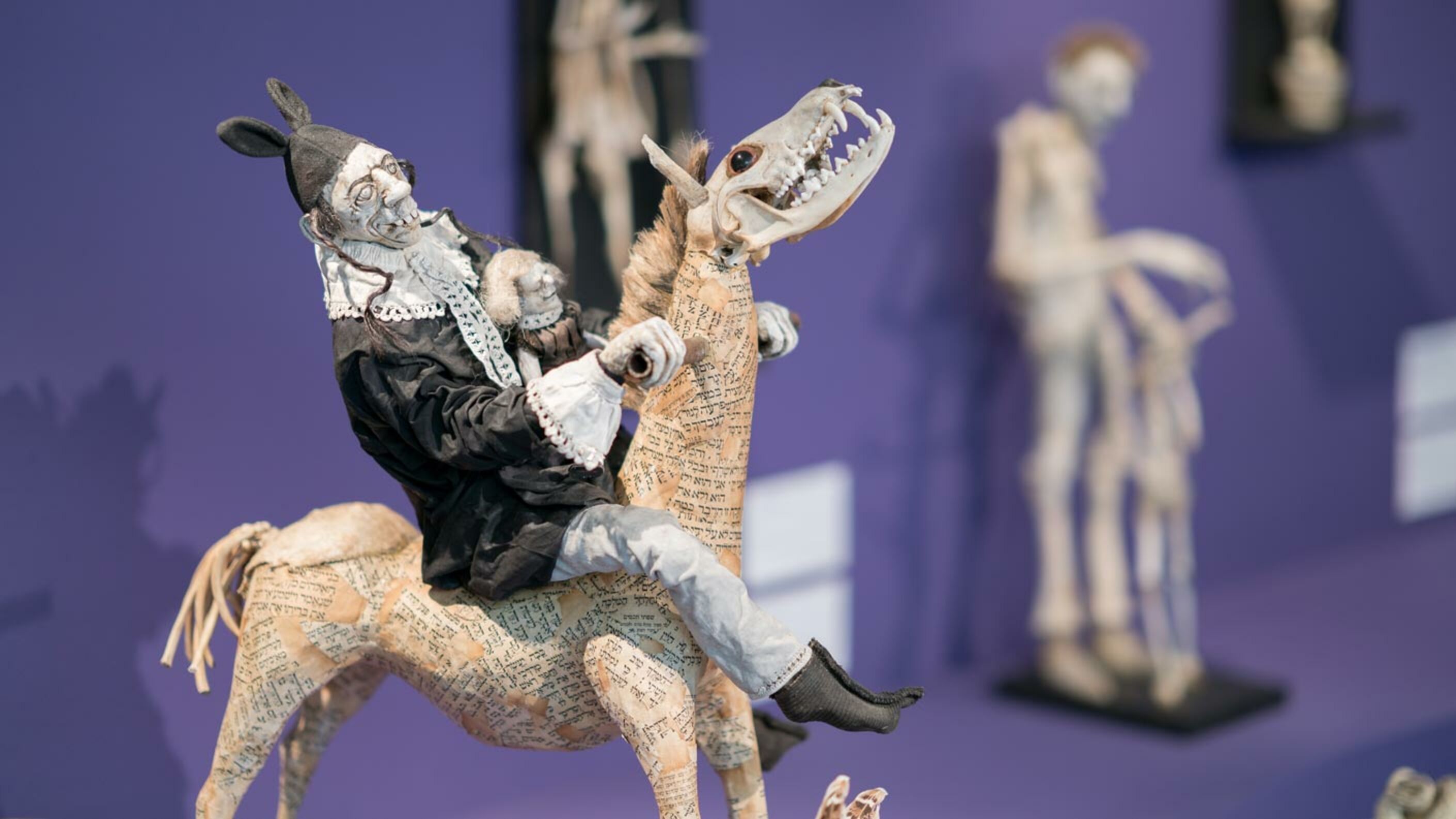 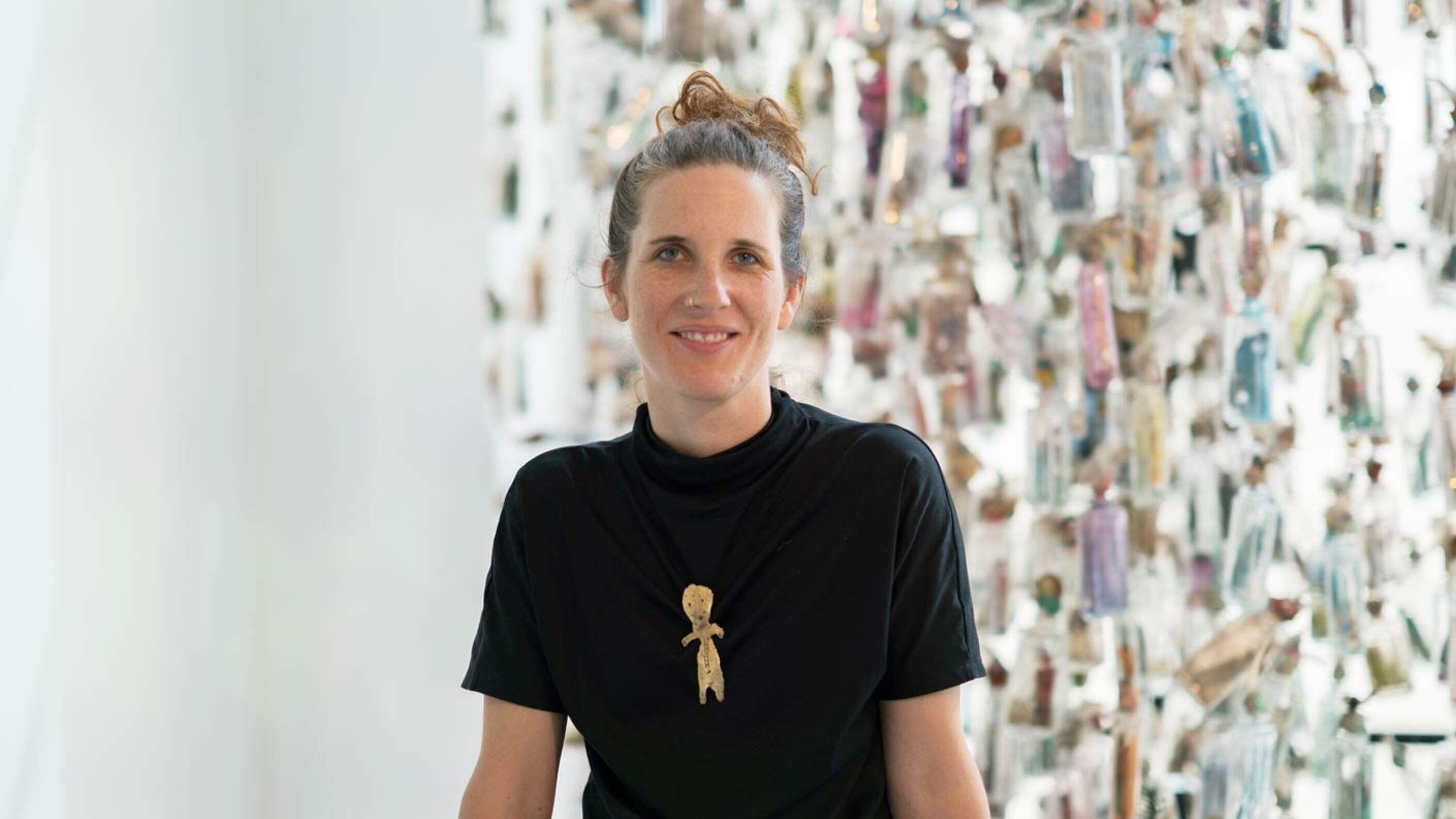 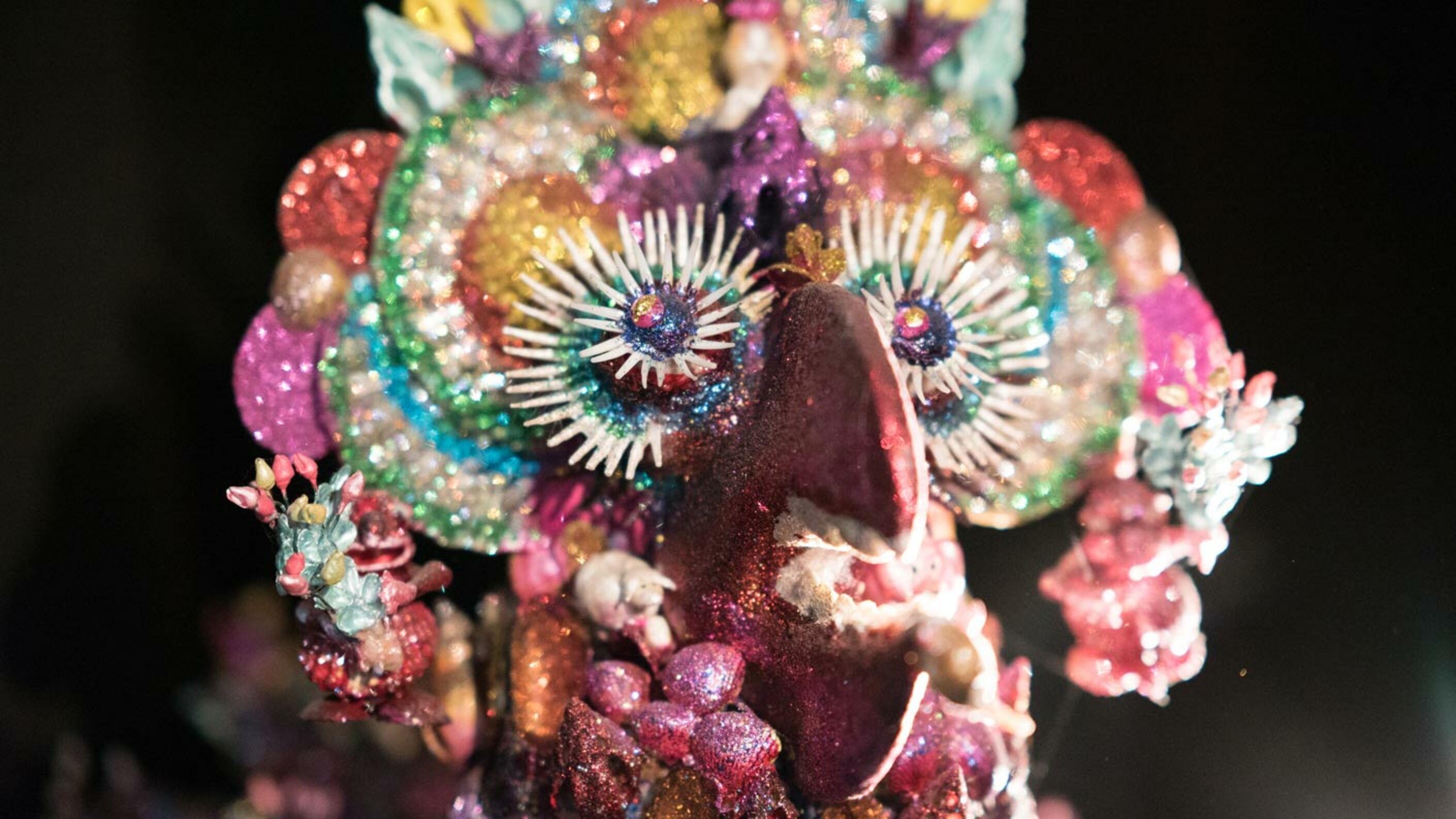 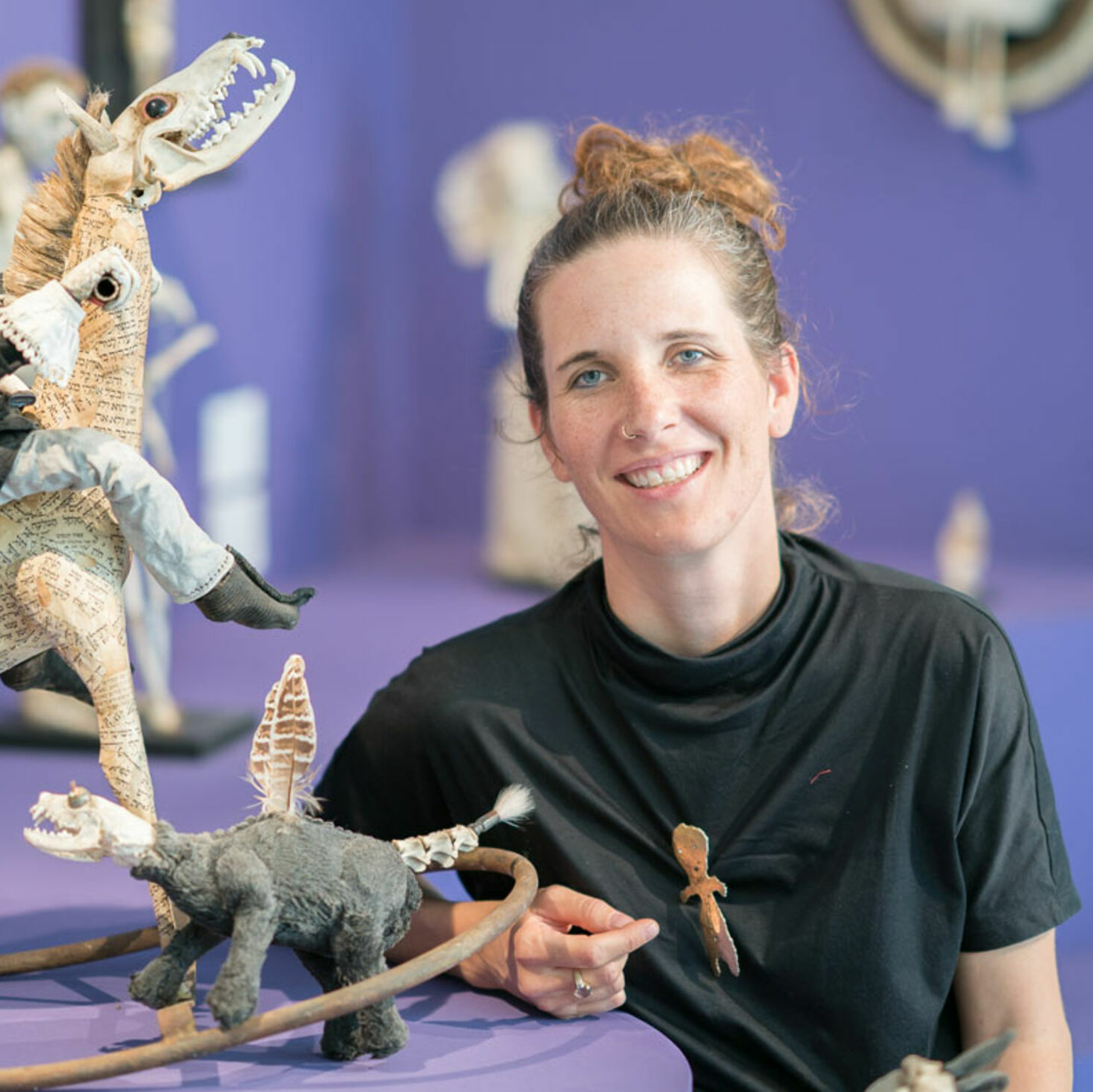 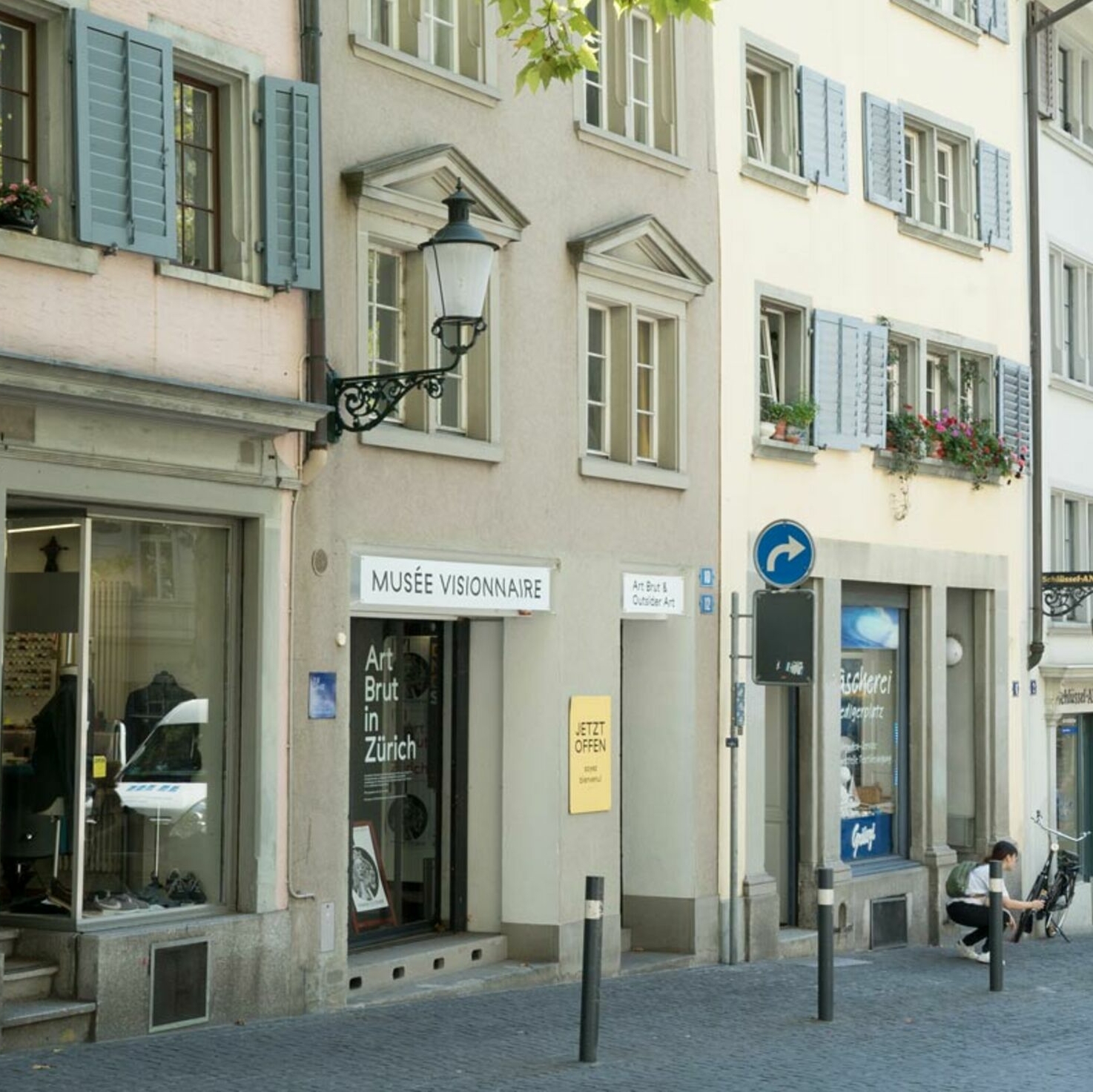 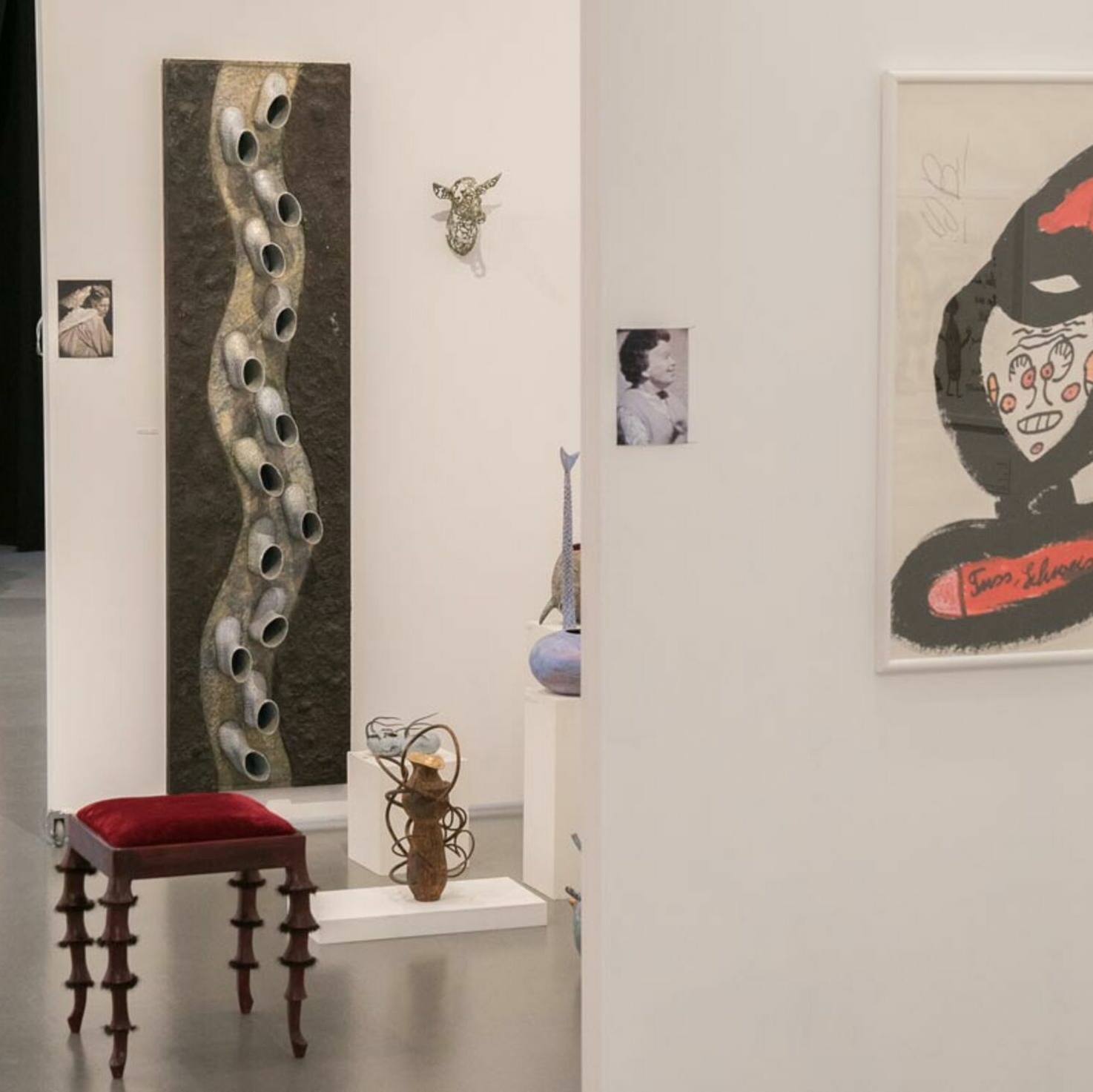 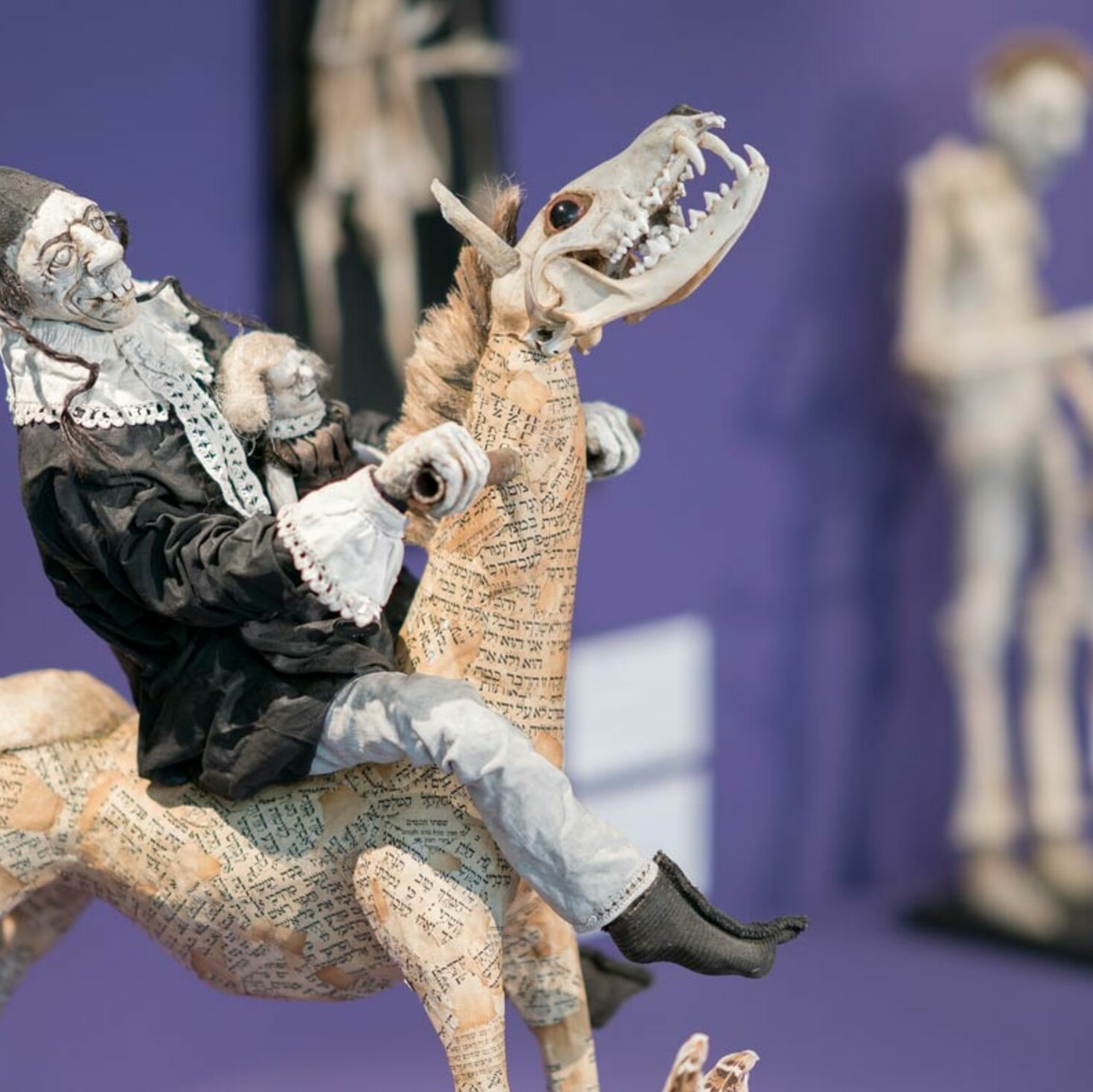 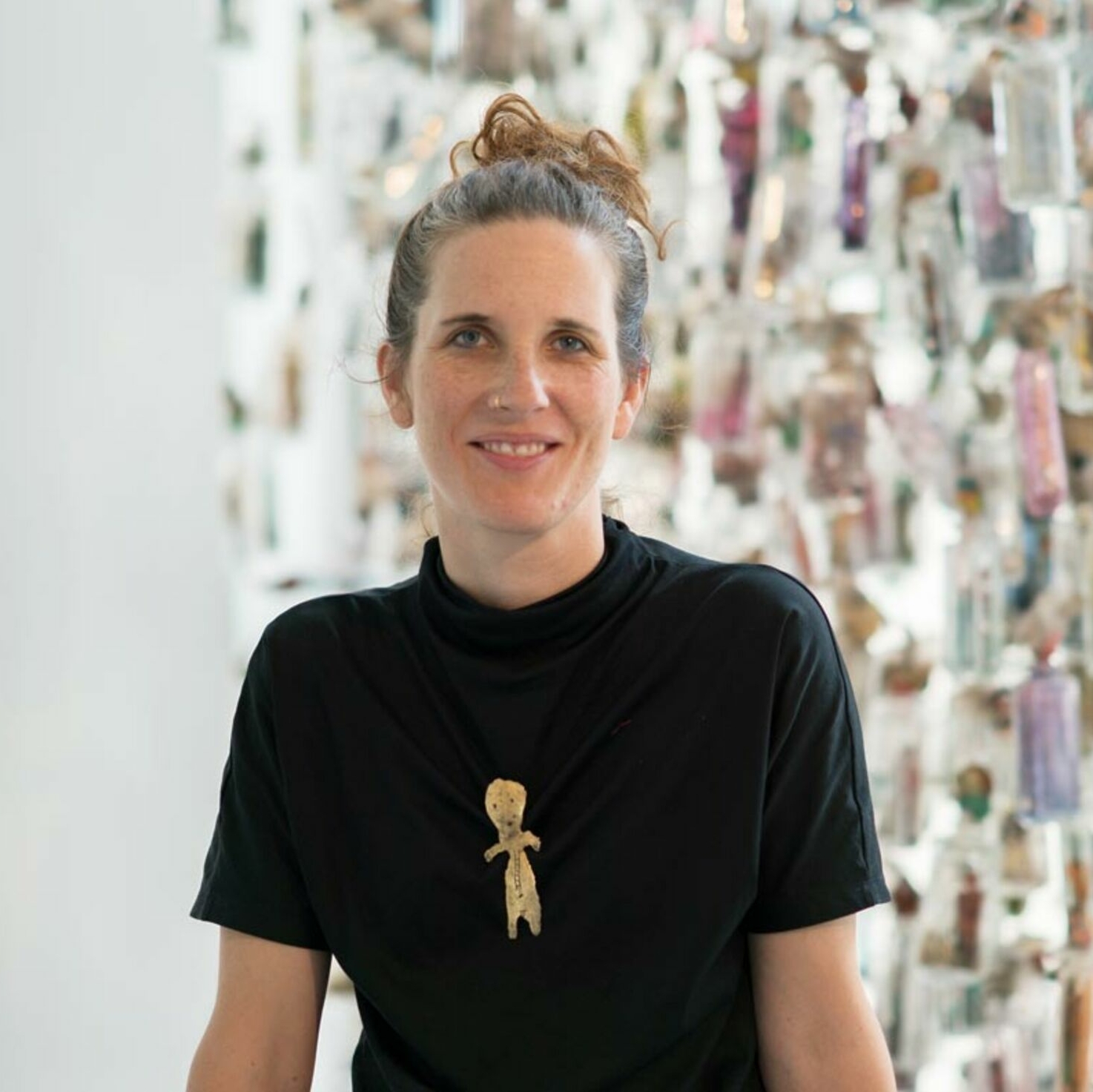 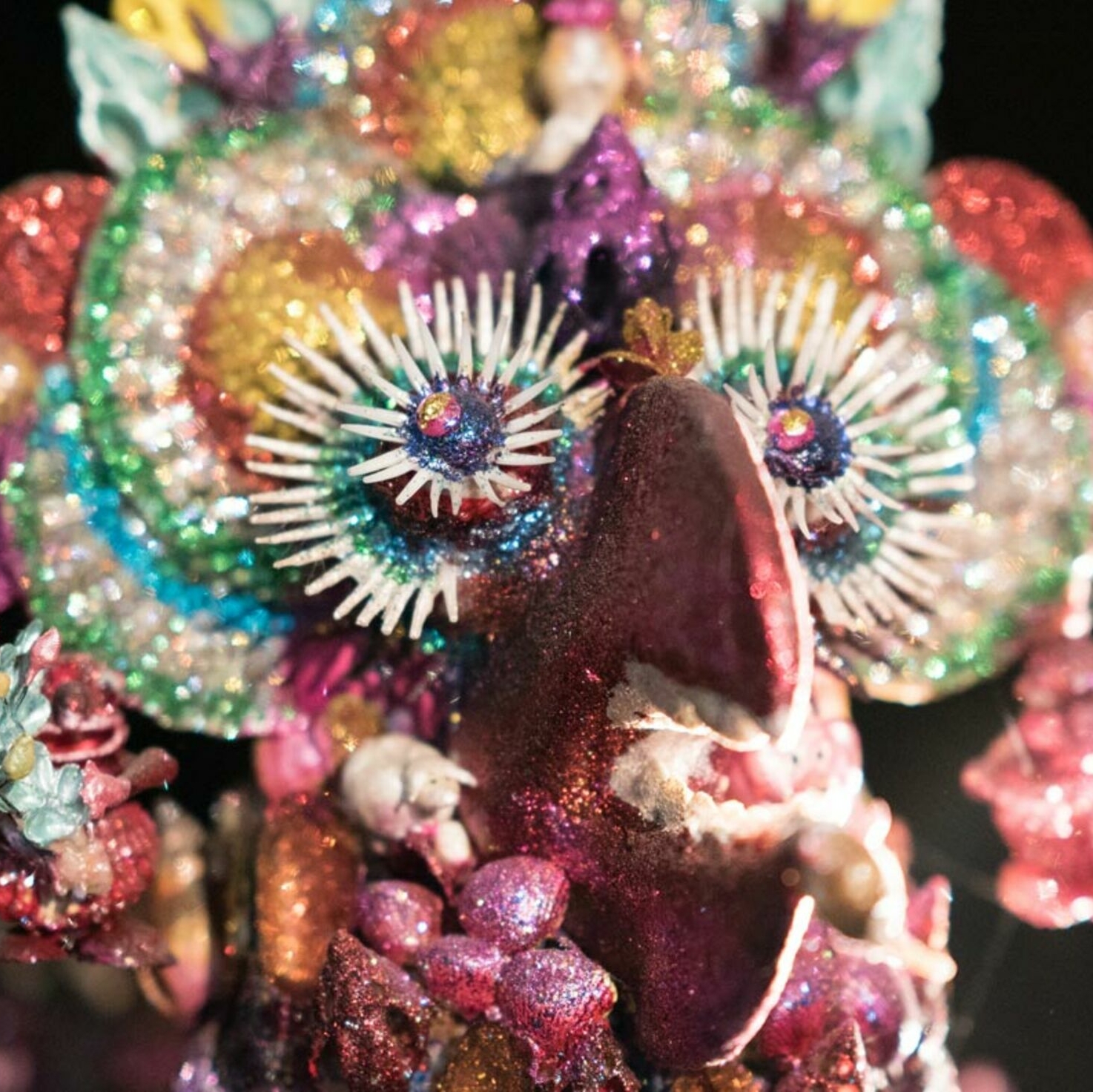 Manuela Hitz is the artistic director and curator of Musée Visionnaire. The museum presents works by outsider artists.

Outsider artists usually have no formal qualifications in their artistic discipline and reject the mainstream art market. Even so, Musée Visionnaire displays their works. ‘Outsider art gets under people’s skin,’ says curator Manuela Hitz.

The creature stares at visitors through eyes that are as wide as saucers. It has thick blue eyelashes, and it wears an elaborate headdress made of shells. Everything sparkles, right down to the tiny figures that perch on the birdlike creature. Another glittering face offers a broad grin. It is also covered in seashells, and instead of hair, it wears a crown of roses. ‘A fascinating world of glitz and glamour’ is the description provided by Musée Visionnaire on the works by Paul Amar. The small museum located on Predigerplatz counts the French outsider artist’s pieces among its permanent collection. ‘They never fail to attract attention. Children are especially taken by them,’ says curator and artistic director Manuela Hitz. Amar has spent decades collecting thousands of shells from beaches and restaurants, before daubing them in nail polish and putting them together to create large-scale works.

Paul Amar has spent decades collecting thousands of shells from beaches and restaurants.

Musée Visionnaire was founded by Susi Brunner and her daughter Rea in 2013. Prior to that, Brunner ran a gallery for outsider art for just under four decades. Opening Musée Visionnaire was a dream come true for Susi. ‘A museum doesn’t work in the same way as a gallery. Here, the commercial aspects are pushed into the background. The focus is more on the effort involved and the endless diversity present in outsider art,’ explains Manuela. Musée Visionnaire shows an average of two temporary exhibitions per year. The works continue to be taken from the large collection assembled by Susi, who passed away in April 2018. The museum also presents pieces on loan from private individuals and other museums.

Musée Visionnaire generally showcases older artists. One reason for this is that many outsider artists are not discovered until later in life – or until after their death. As diverse as their lives may be, outsider artists share some character traits: they are all autodidacts, meaning that they never attended art school. Furthermore, they don’t take part in contemporary discourse on art and have no interest in the commercial side of their craft. ‘Their motivation comes from within, though some artists do create works for social or idealistic reasons,’ explains Manuela.

Musée Visionnaire was founded by Susi Brunner and her daughter Rea in 2013.

Outsiders are often people who have consciously withdrawn from society. ‘In the most extreme cases, they spend their lives in an institution because they have psychological, mental or physical impairments.’ A number of factors determine how strongly the artist’s respective biography features in the exhibition. ‘It can sometimes be important for understanding the piece,’ says Manuela. ‘Of course, we don’t want to be too voyeuristic about things. It’s ultimately about the art.’

Many outsider artists are not discovered until later in life – or until after their death.

Sometimes, she reveals, it is not easy to get in contact with the artists. ‘But I quite enjoy the challenge,’ she says. Dealing with them is no more complicated than with standard artists. ‘There are more than a few headstrong people in the mainstream art world too,’ she says with a laugh. ‘Besides, I like it when people are authentic. After all, art brut – outsider art – means art that is raw.’

Manuela believes it is important to see eye to eye with the artists when she meets them. Many have never imagined actually presenting their works in a museum. ‘Outsider artists aren’t especially interested in what is happening around them,’ says Manuela. ‘They make art for art’s sake, not because they want to become famous as artists.’ Their passion has inspired Manuela too. She studied at Zurich University of the Arts, where she sometimes missed the lack of self-consciousness that she now finds so fascinating in outsider art.

Some outsider artists do manage to break through to the mainstream market. Judith Scott is one example. The US-American artist with Down syndrome wrapped objects in yarn to create sculptures that have been exhibited in the Museum of Modern Art in New York – and which are now part of the current exhibition at Musée Visionnaire. Despite this, Scott – who died in 2005 – showed no interest in having become an established name in the art world. Manuela believes it is a good thing whenever an outsider artist breaks through into the mainstream. ‘It’s fantastic when pieces are so strong that it makes no difference whether the artist actually studied art or what stance they take.’

‘It’s fantastic when pieces are so strong that it makes no difference whether the artist actually studied art or what stance they take.’

Until a few years ago, private collectors had virtually no interest in outsider art. ‘Aside from a few exceptions, it wasn’t possible to make money from it,’ says Manuela. Now, however, the mainstream market has discovered outsider art. Selected works were presented at the Venice Biennale in 2013, and the Museum of Modern Art in New York is putting its own collection together. As Manuela explains: ‘Outsider art is becoming more and more important because of its directness and the way it touches its audience.’