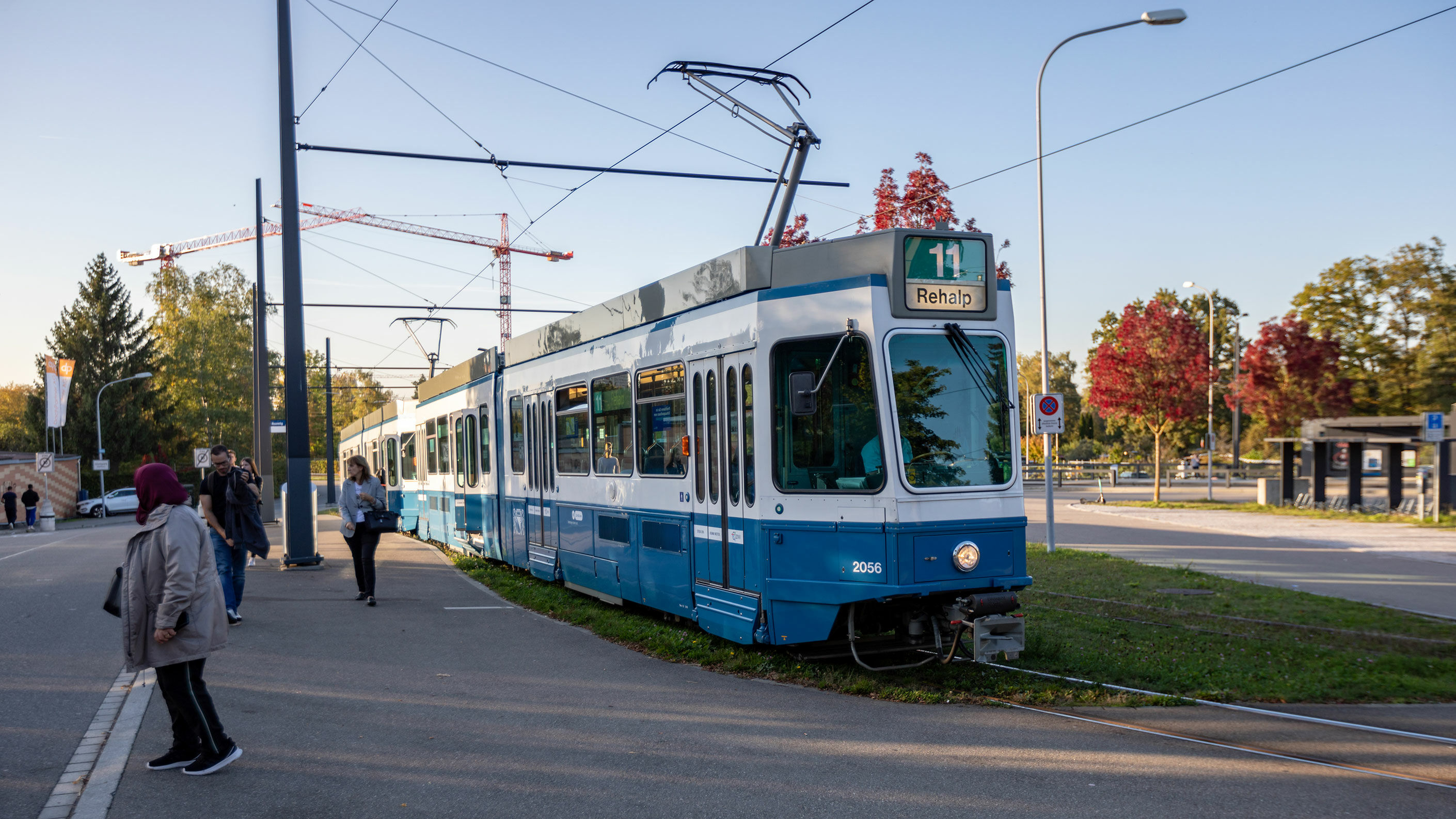 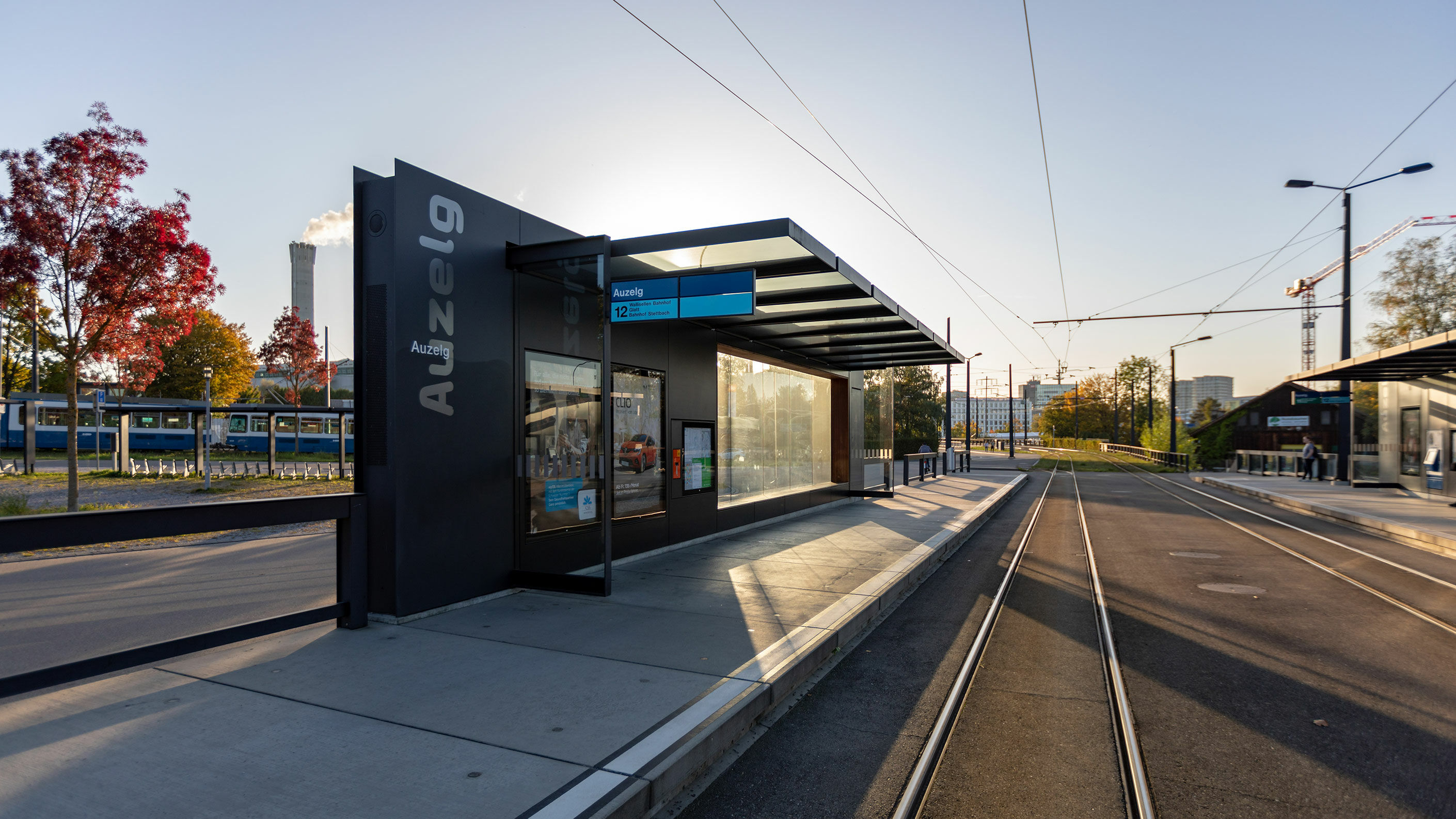 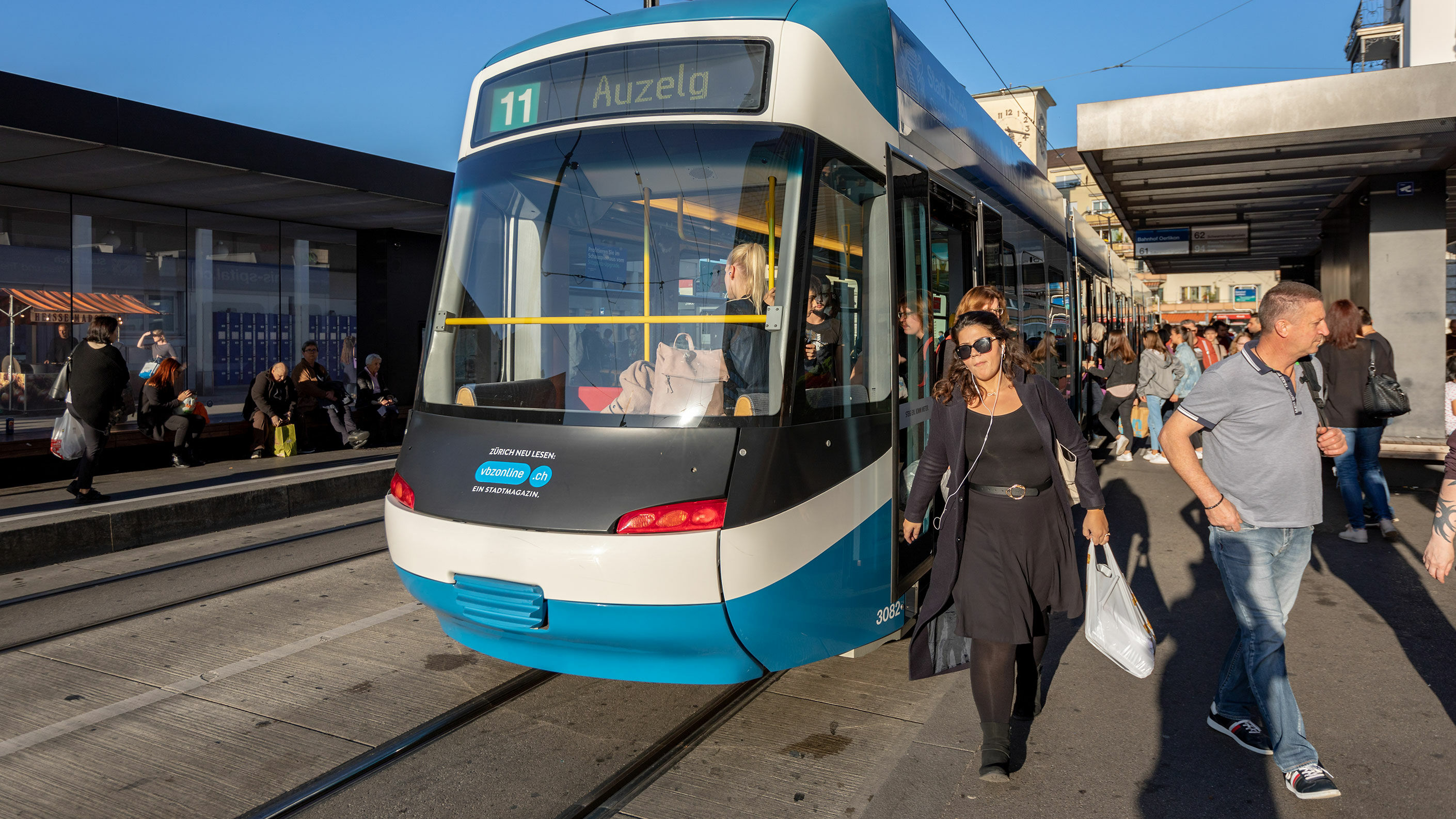 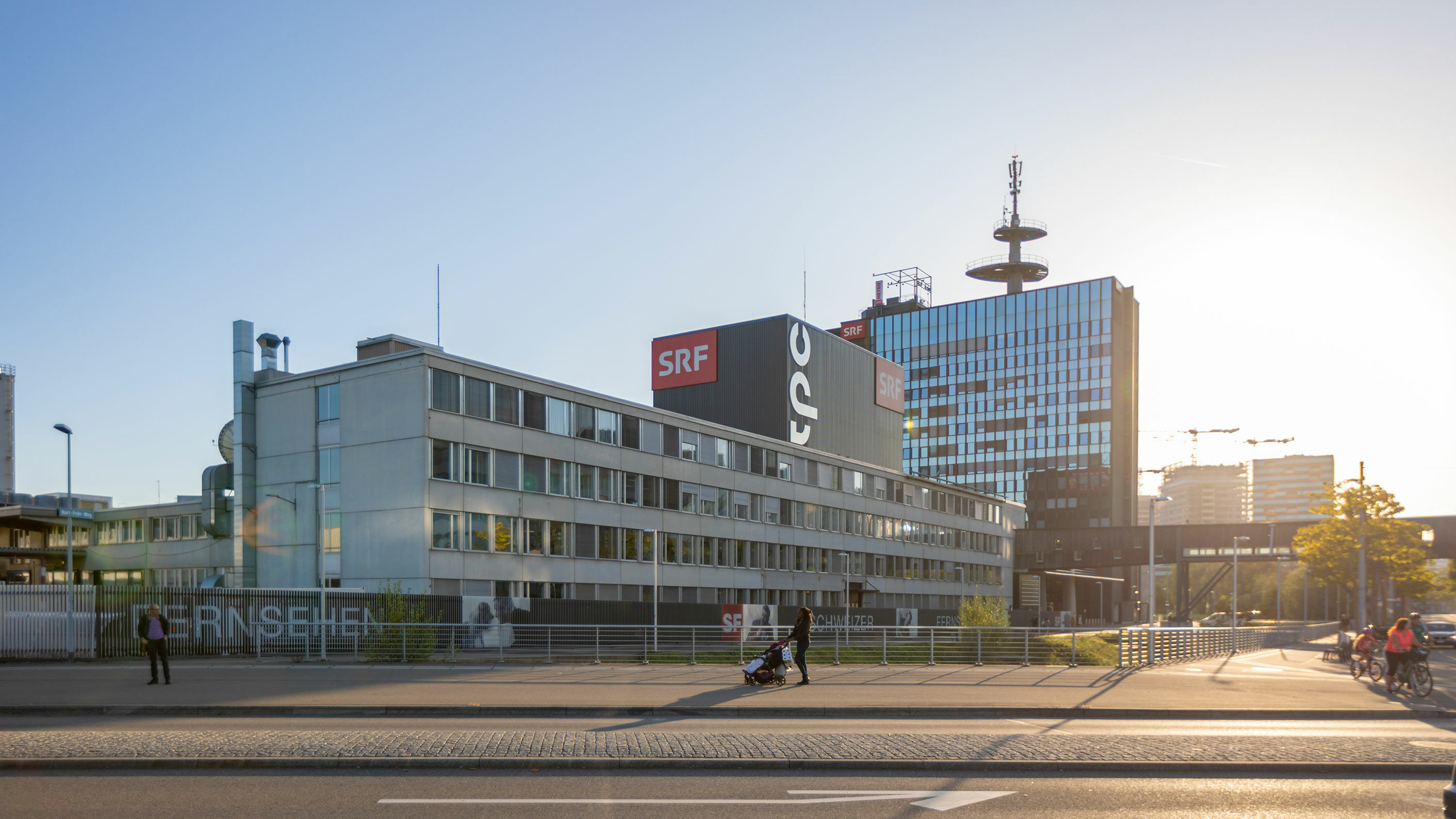 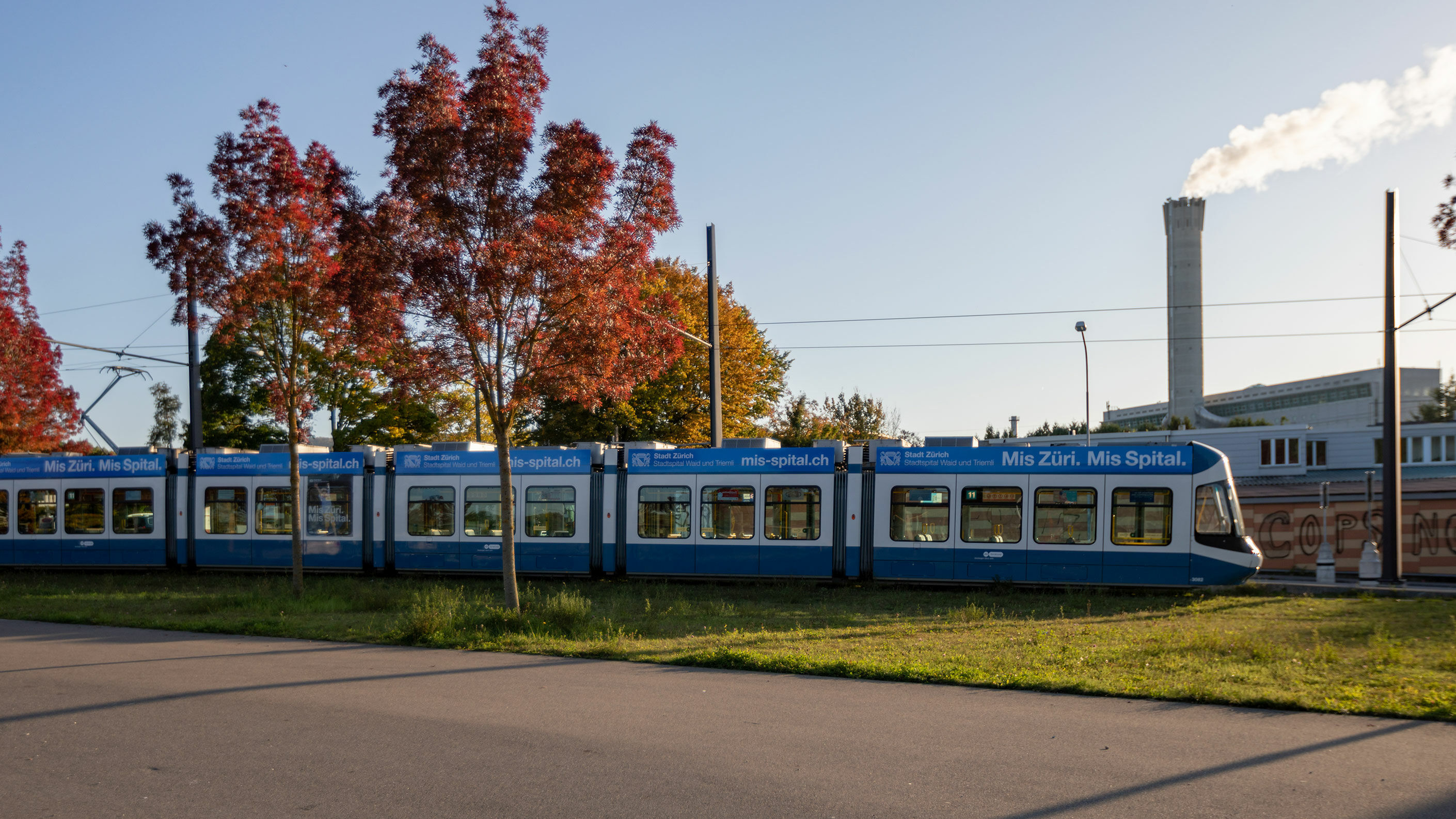 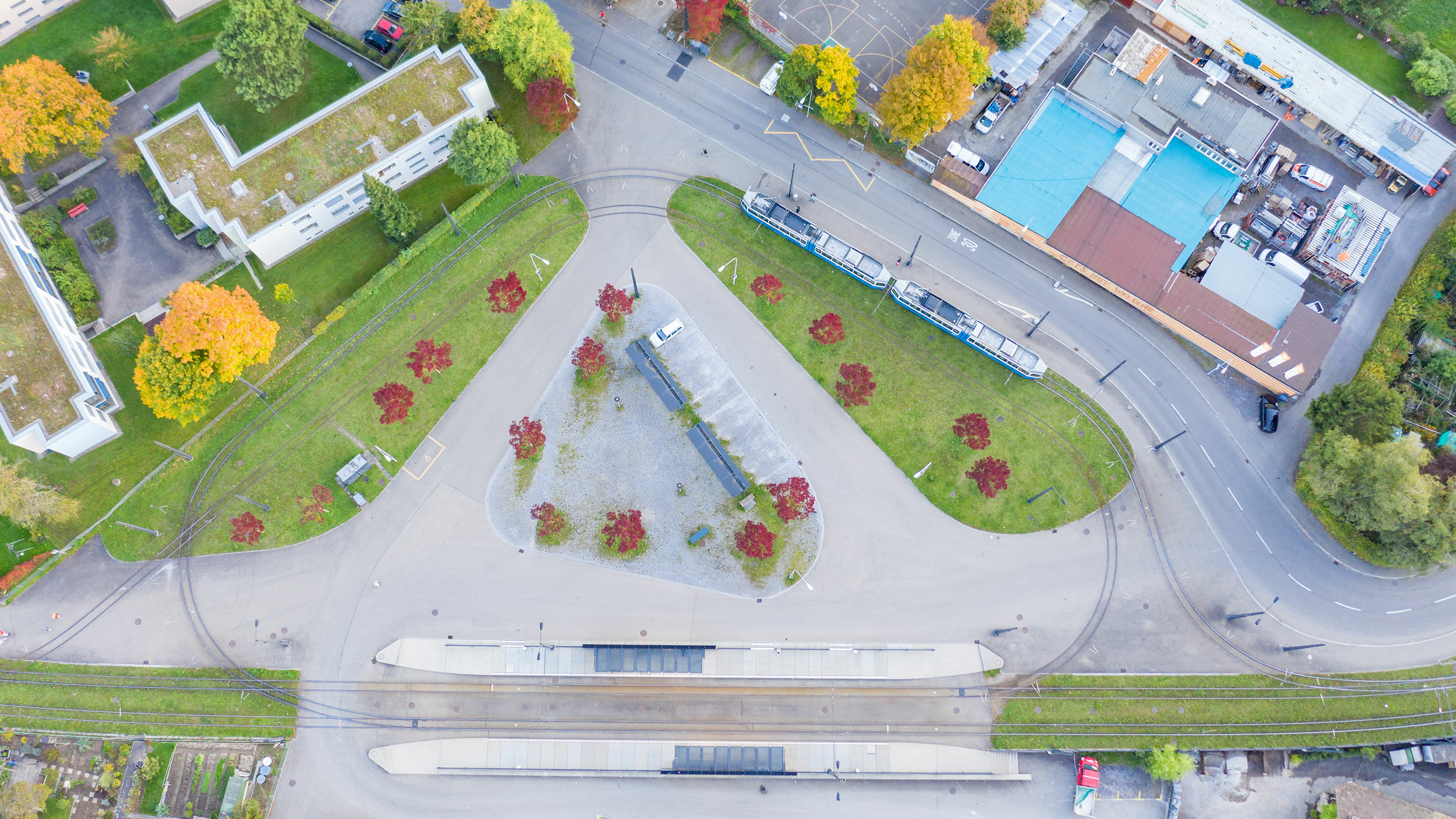 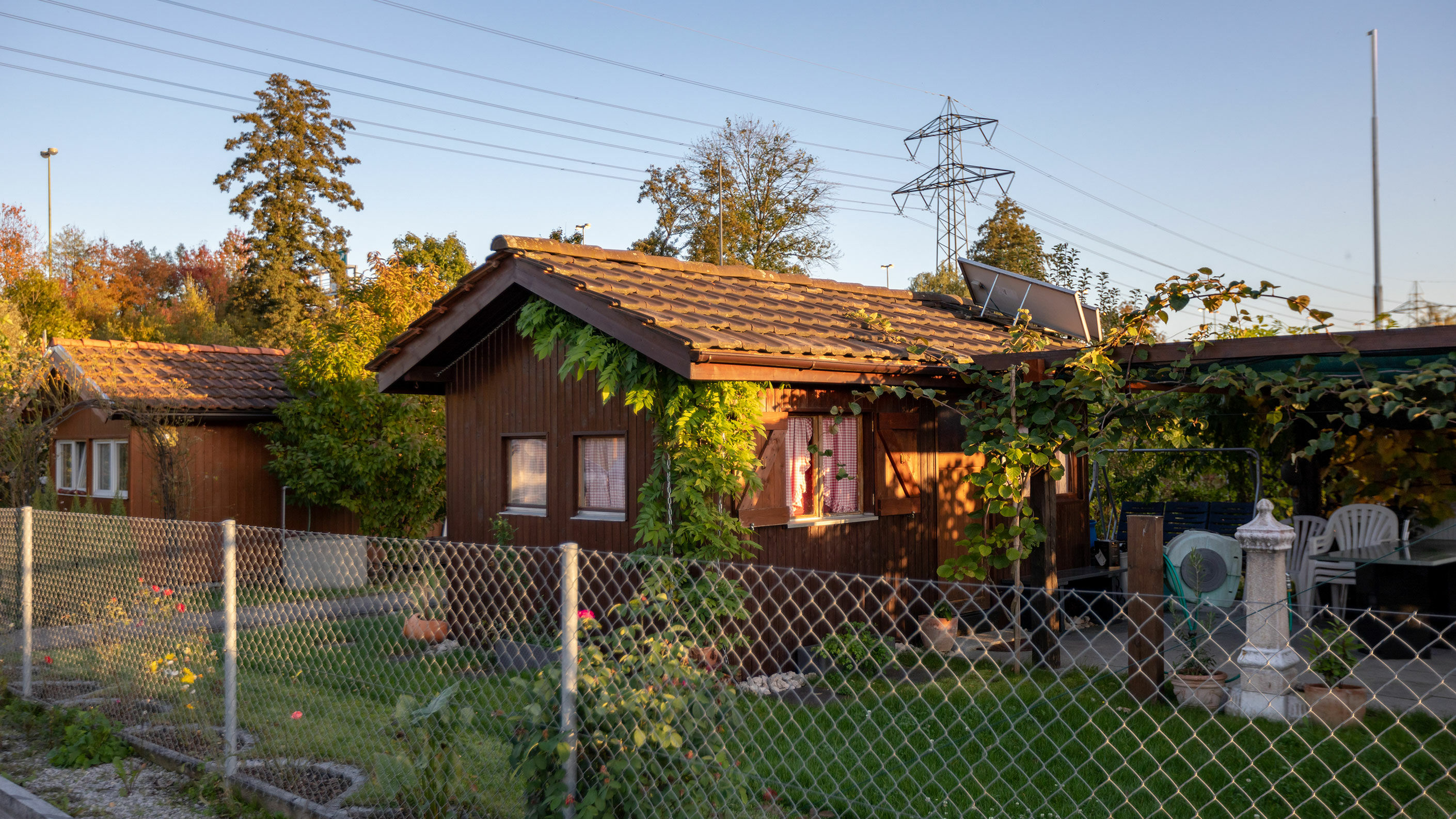 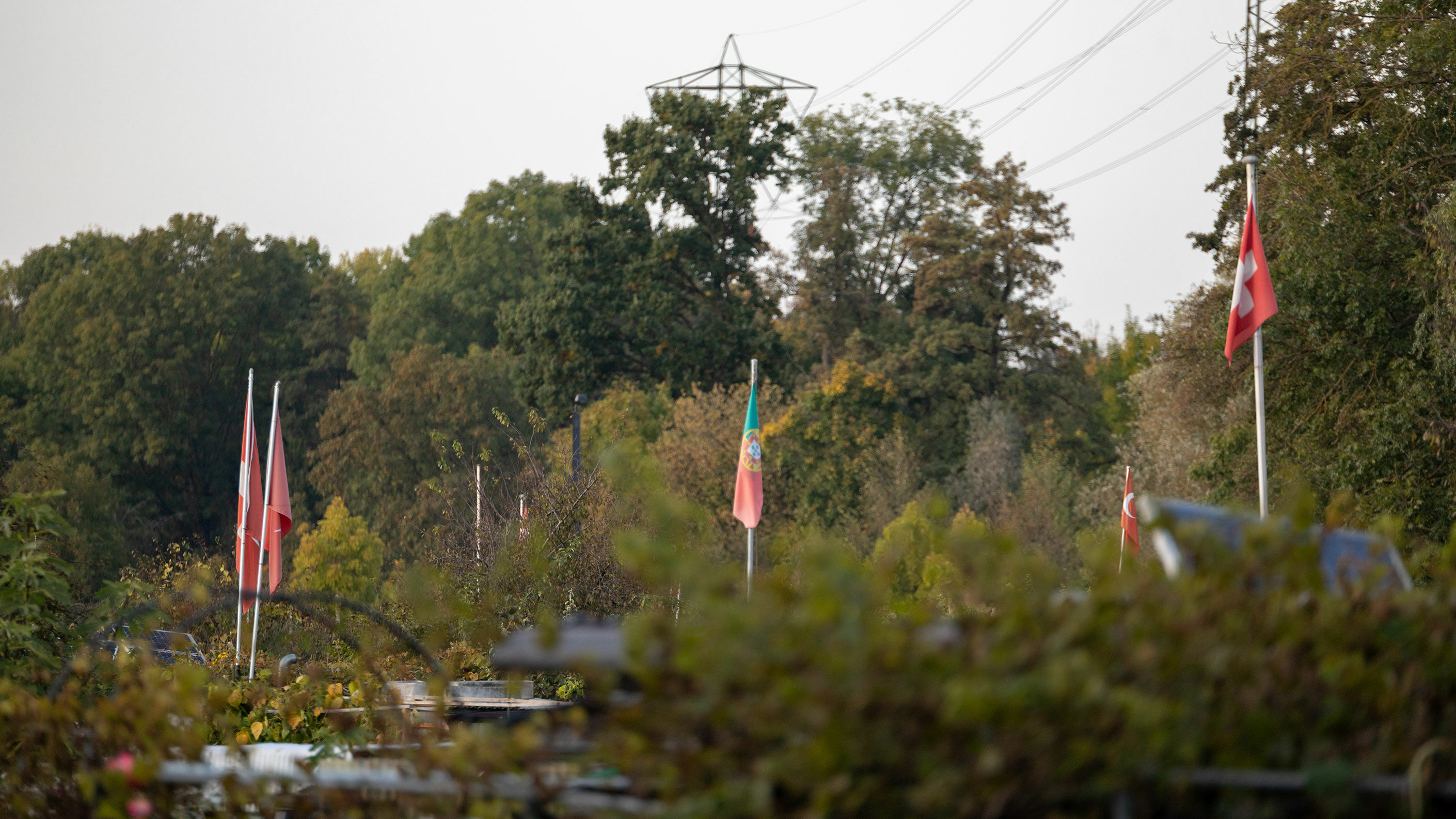 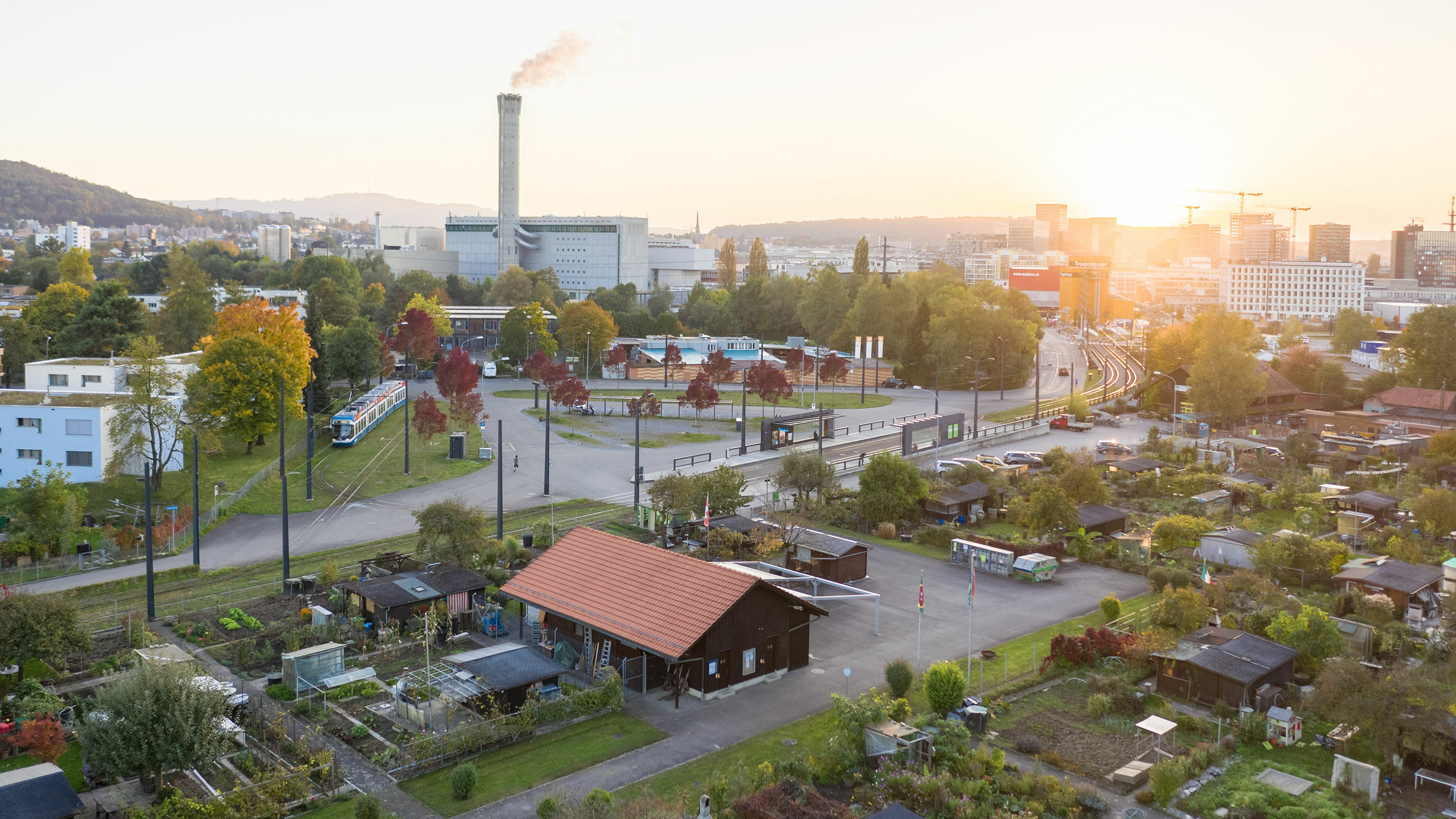 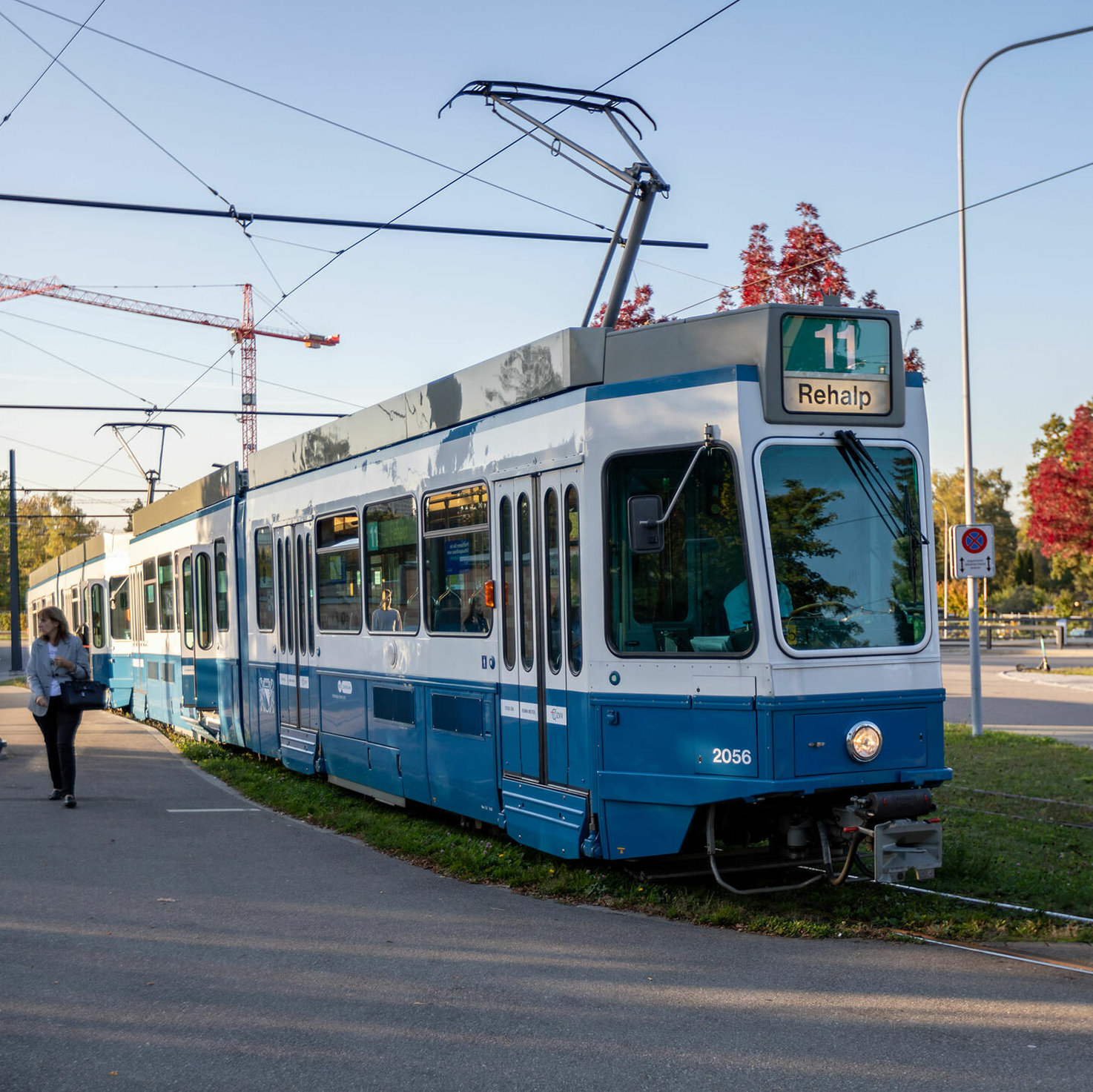 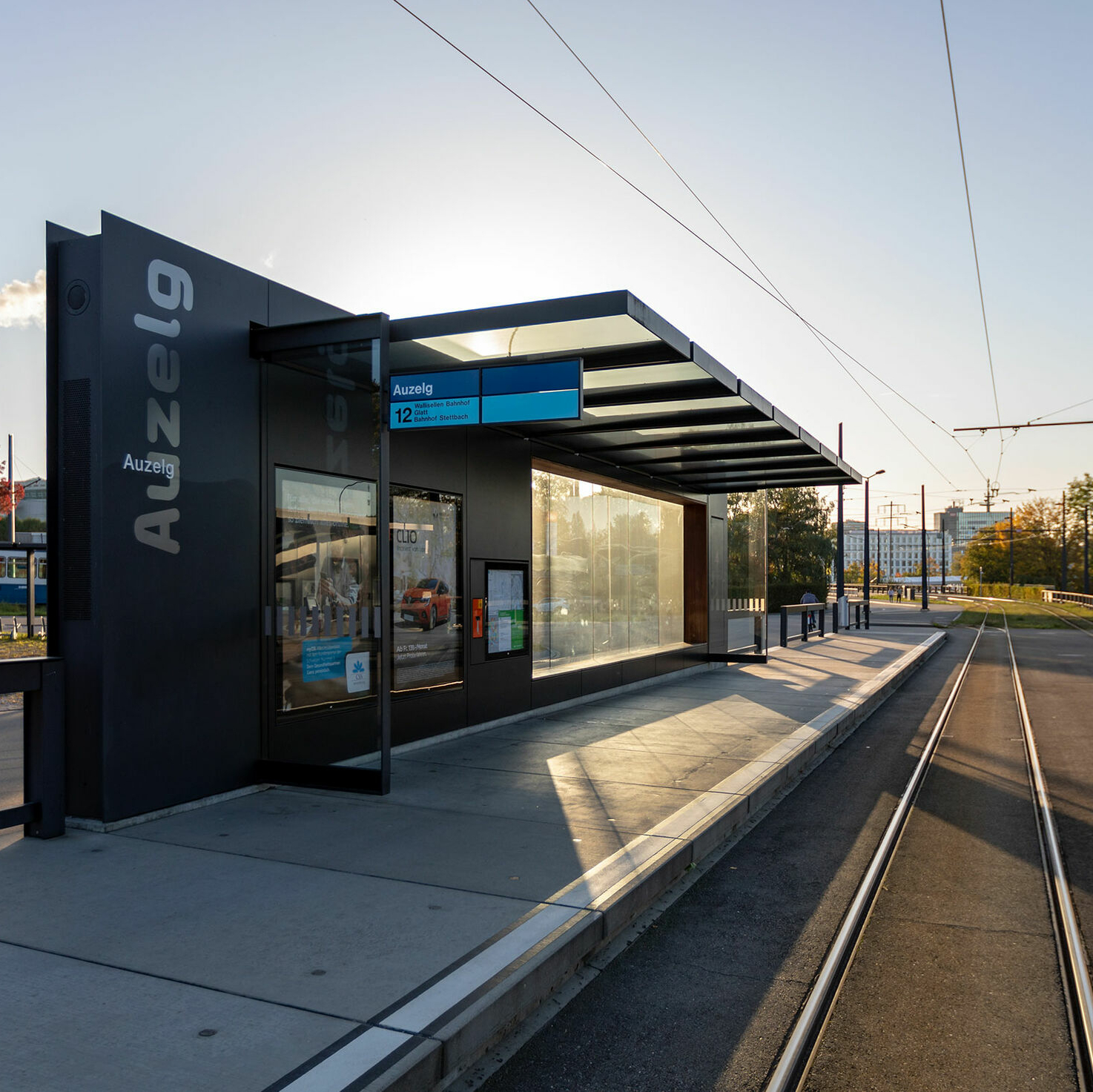 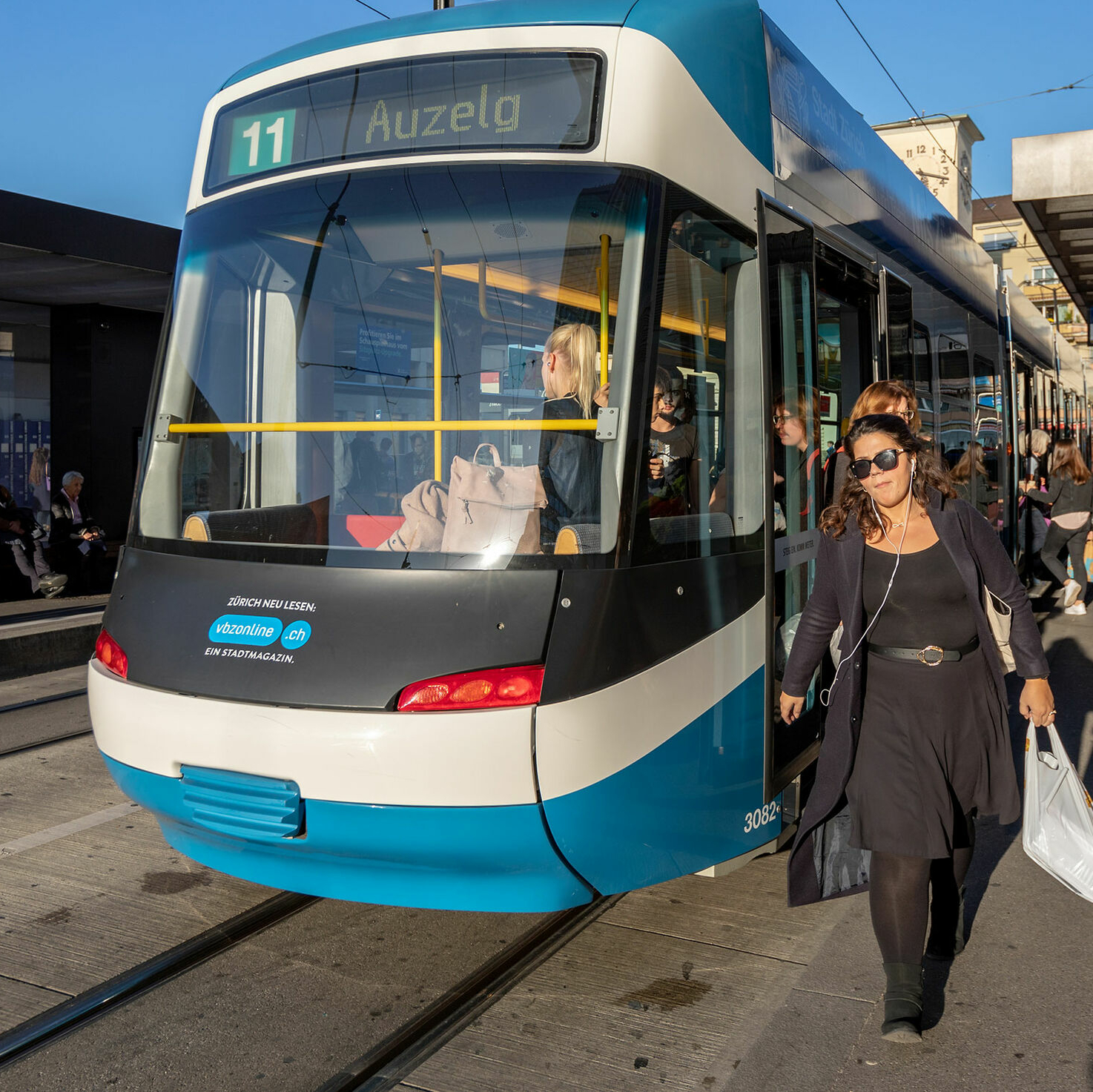 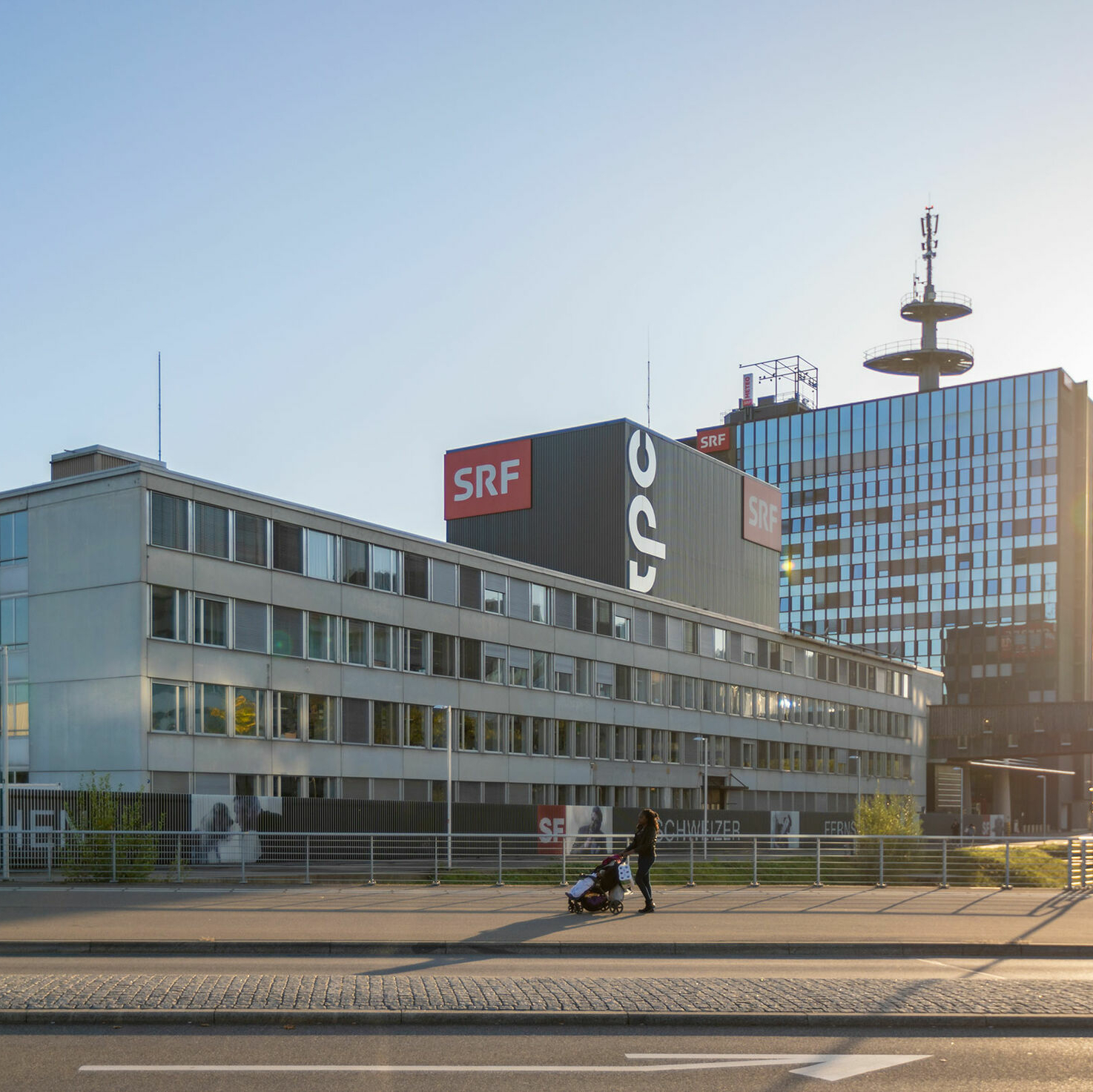 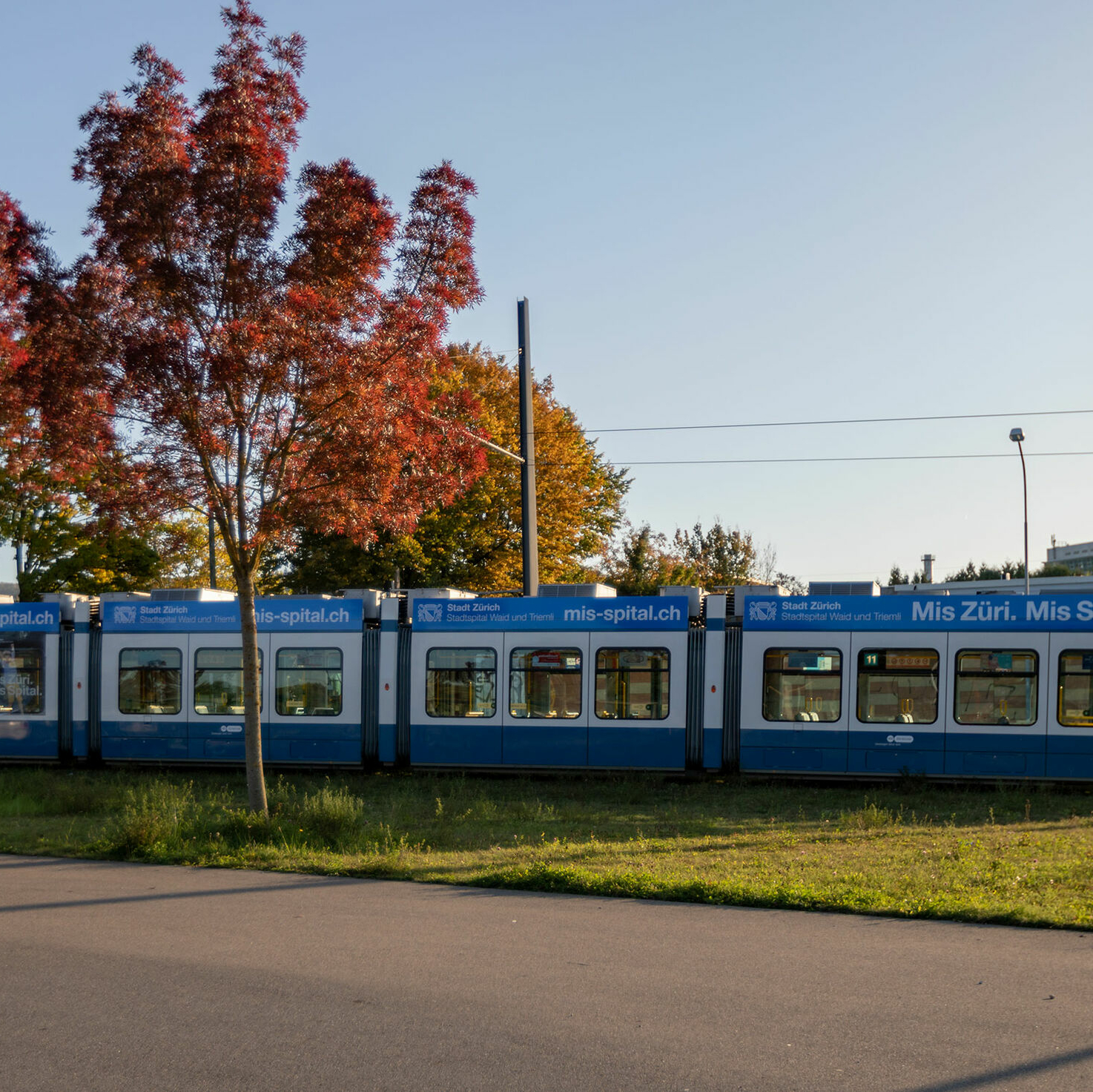 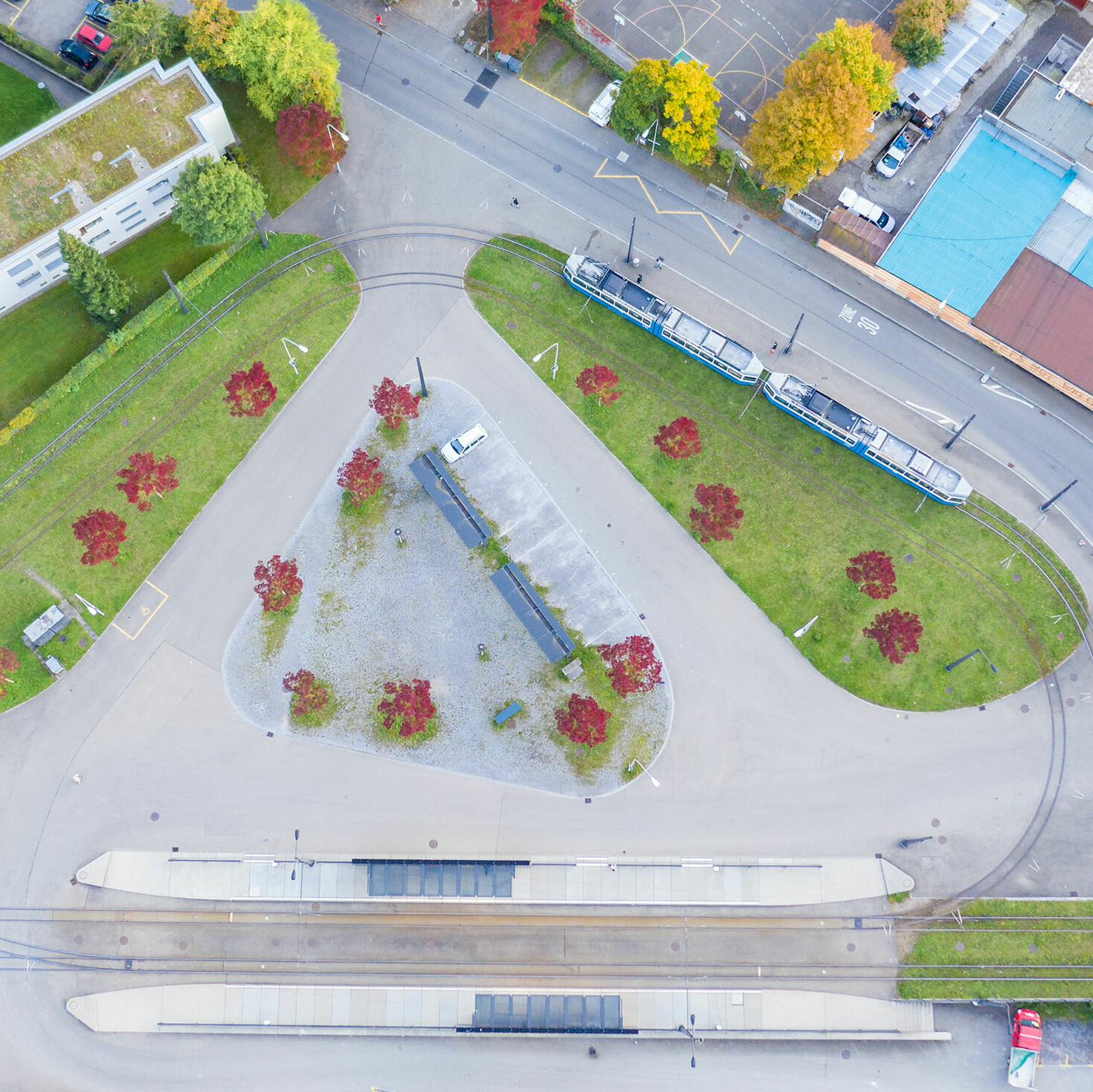 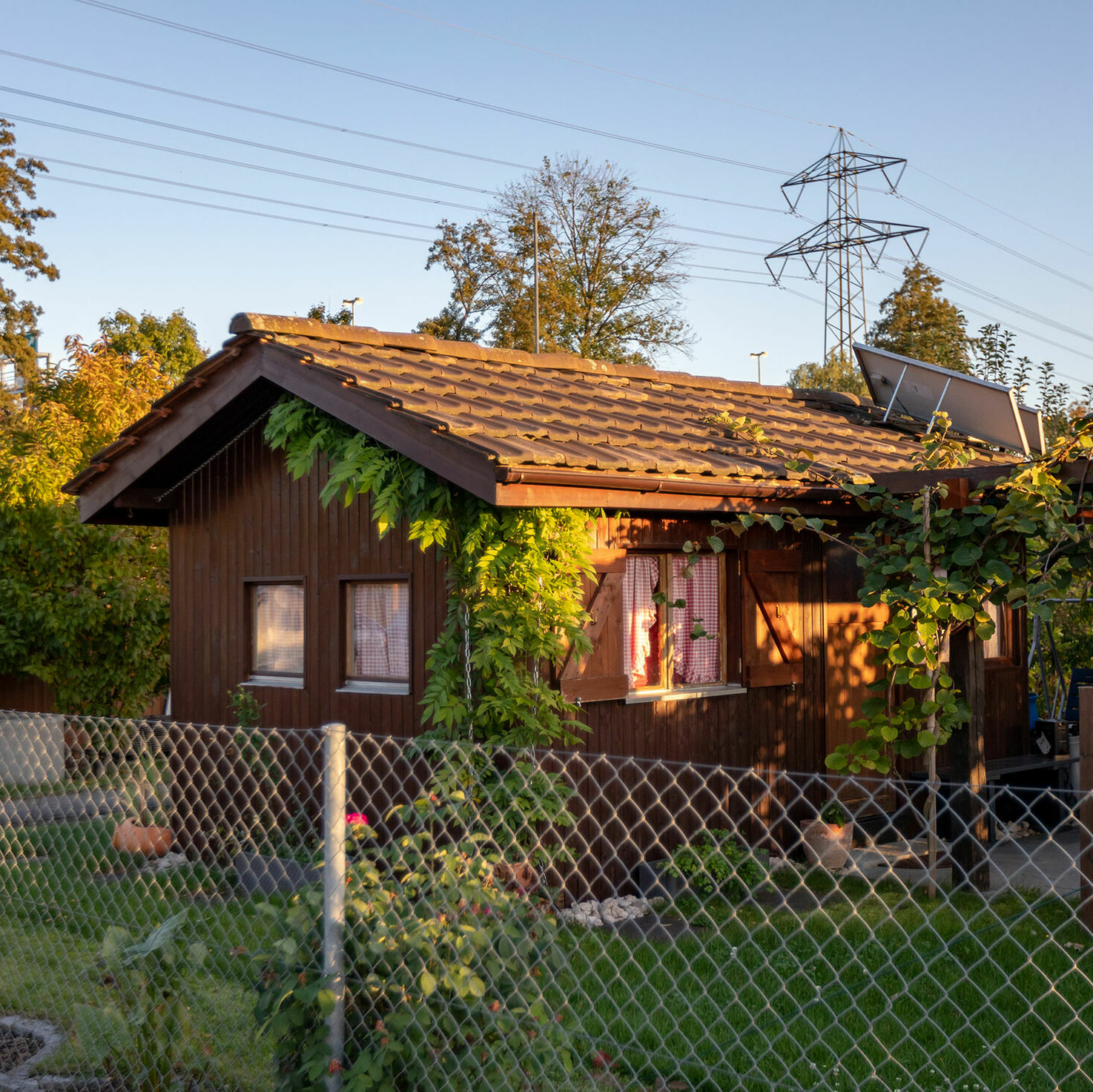 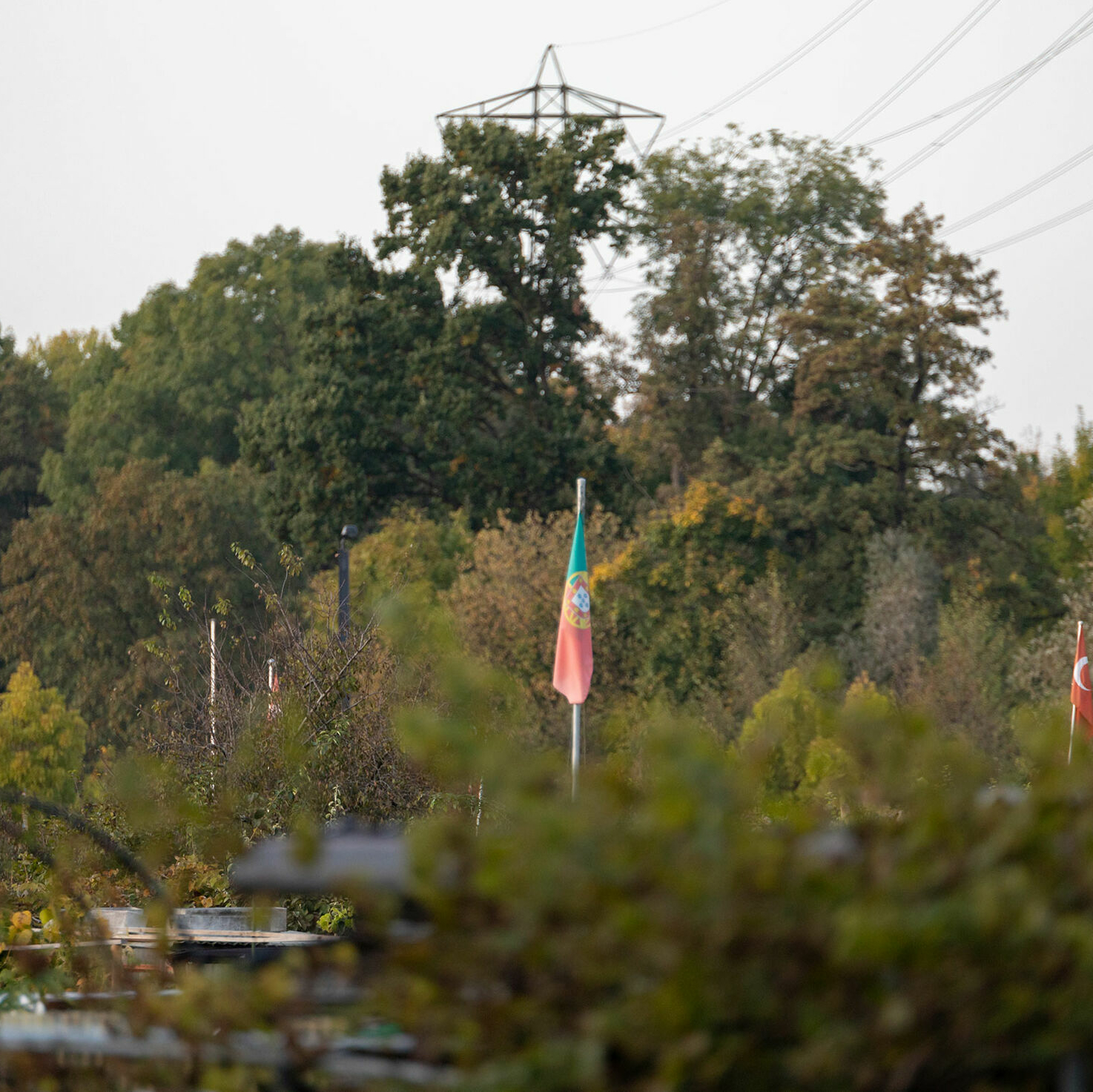 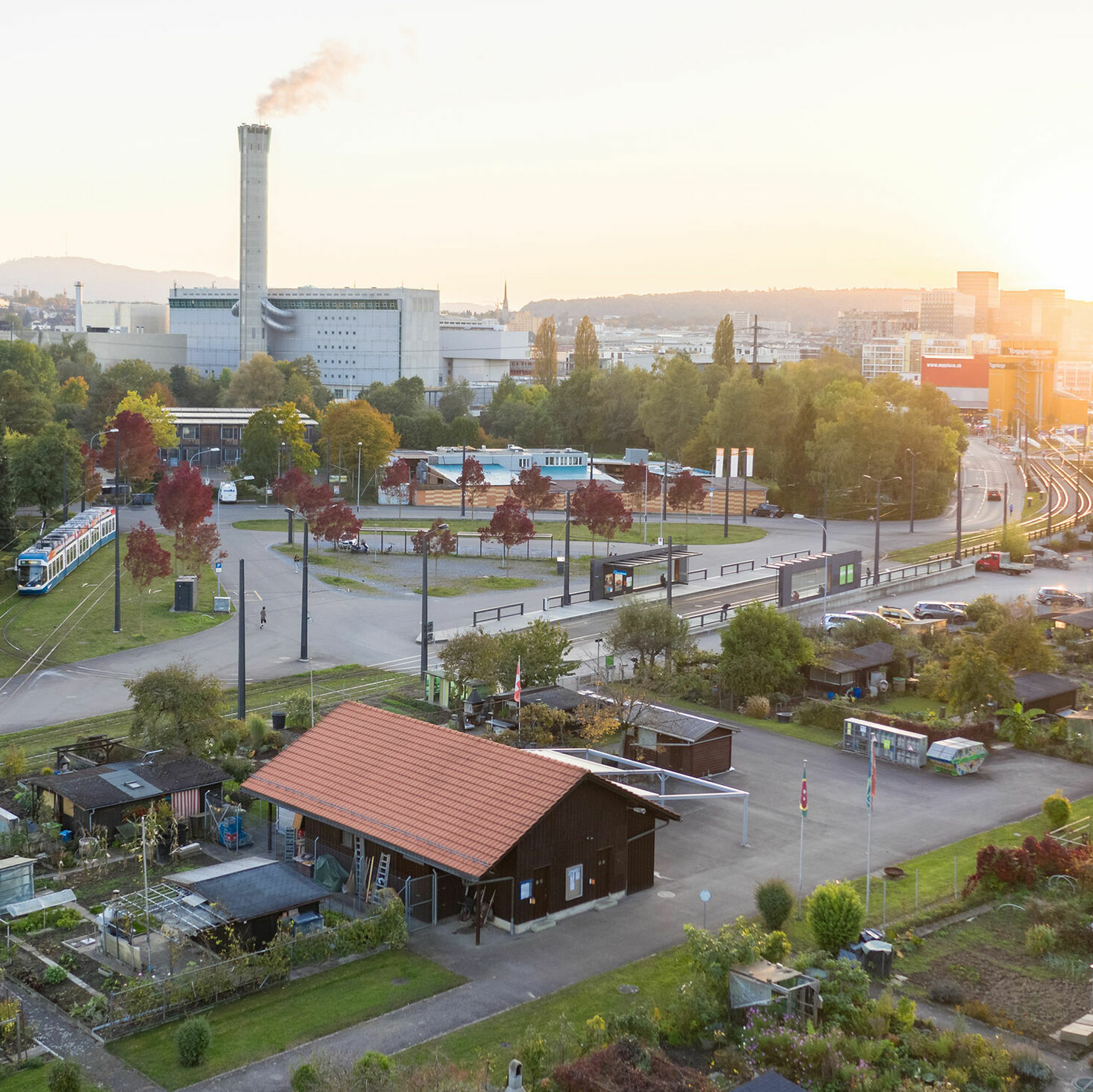 The bright green number 11 tram runs between Rehalp and Auzelg. It’s the most-used tramline in Zurich, but only a few people stay on it all the way to the terminus at Auzelg. This is the city’s only neighbourhood on the Glatt river. Auzelg could be called Zurich’s Bronx. It was once a disreputable ghetto, but today it has more of a Scandinavian feel. Maybe that’s because it’s on the north side of town?

The tram began running from the city to Auzelg in 2006. When the number 11 reaches the final stop, it crosses the Glatt via a small bridge. Right next to it, a sign above the entrance to an allotment garden bears the inscription ‘Min Fyrabig’ (‘My after-work spot’).

The river is lined with several such allotments, many of which are proudly flying their owner’s national flag. The Portuguese flag is the most popular, followed by the Italian Tricolore. This idea of flying the flag in your allotment is a phenomenon in itself.

Here, on the border with Oerlikon, Auzelg is a true oasis – even though Schwamendingen is statistically Zurich’s poorest area and Auzelg is called the ‘Zuerich Ghetto’ on a graffiti website. The area is also often compared with the Bronx, probably because of its young, hip-hop-loving residents who have a tendency to romanticise their ‘hood by comparing it to the birthplace of the genre.

It’s true that you feel a bit like you’re in New York.

When you walk past the bleak old apartment blocks that line the streets, cross the train tracks in Auzelg Ost, or hang around under the motorway bridges, it’s true that you feel a bit like you’re in the legendary New York district. But that’s as far as it goes with the Bronx feeling.

‘Cops Not Welcome’ has been spray-painted at the tram turning area, but this doesn’t deter the police. Anyway, the neighbourhood really doesn’t feel dangerous. There are very few fences, and the only guard dog to be seen in a garden is a ceramic one.

The streets are deserted. The neighbourhood’s only shop used to act as a meeting place for the locals, particularly teenagers, but it has closed down. Planes fly overhead – so close, you feel you could reach out and touch them. The names of the airlines are easy to make out.

On the outskirts, the Turnier-Tanzklub Zürich is tucked away under the Aubrücke bridge, while nearby Dancers, a dance venue and school, teaches bachata, disco fox and English waltz. It is adjacent to the neighbourhood’s only restaurant, the Aubrugg.

Auzelg only became part of the city of Zurich when Schwamendingen was incorporated as a district in 1934. In 1941, architect Georg Seger built 17 two-storey houses with a woodshed attached and laid out 1,500 square metres of green space. Today, they are listed buildings – in a place that the architect planned as a ‘community of unemployed and self-sufficient people’ inhabited by the unemployed, the ‘unskilled’, and ‘barely employable manual workers’.

In 1939, the city council hoped that these people would live out here in the meadows, away from the city, where they could have pleasant lives with their gardens and small animals, and ‘noticeably improve their lot’. This plan of creating a kind of island for society’s rejects couldn’t happen today, but it was done with the best of intentions. Times were different then, and the economy was at rock bottom.

A decade later, when more people moved into the area, it was given the ignominious nickname Negerdörfli, the ghetto. Here on the edge of town, large families who couldn’t pay the high rents demanded in the city centre could finally find affordable housing or even fulfil their dream of buying their own home.

People who move away seem to come back, sooner or later.

Nowadays, Auzelg feels like being in Sweden. Opfikonstrasse, which runs through the entire district, is lined with 120 terraced houses built in Scandinavian style. In an article about the Au estate, architect Claude Paillard wrote: ‘We conformed 100% with Swedish architecture, even though we had never been to Sweden ourselves.’ Even the red paint on the timber façades was imported from Sweden. The locals are unconcerned by the fact that this oasis is now squeezed between the Hagenholz and Aubrugg power stations and the motorway.

Du bisch vom Auzelg Wenn? (You’re from Auzelg if...) is the name of a Facebook group that locals have set up. For example, you’re from Auzelg ‘if you have bought delicious Tilsiter cheese from Langenegger... out on the street’ or ‘when you’ve caught frogs in the Stinkbach and collected frog’s spawn from the pond in the Auwäldli’.

The locals only have positive things to say about their neighbourhood, and people who move away seem to come back, sooner or later. Perhaps that includes professional footballer Francisco Rodríguez? Residents are very proud of this local boy and his two brothers – one of whom plays for the mighty AC Milan in Italy. And Rodríguez loves his home too. In a TV interview, he once described Auzelg as ‘the best neighbourhood ever’.

The number 11 tram runs all day long between Rehalp and Auzelg. The journey takes around 48 minutes. For the timetable click here.