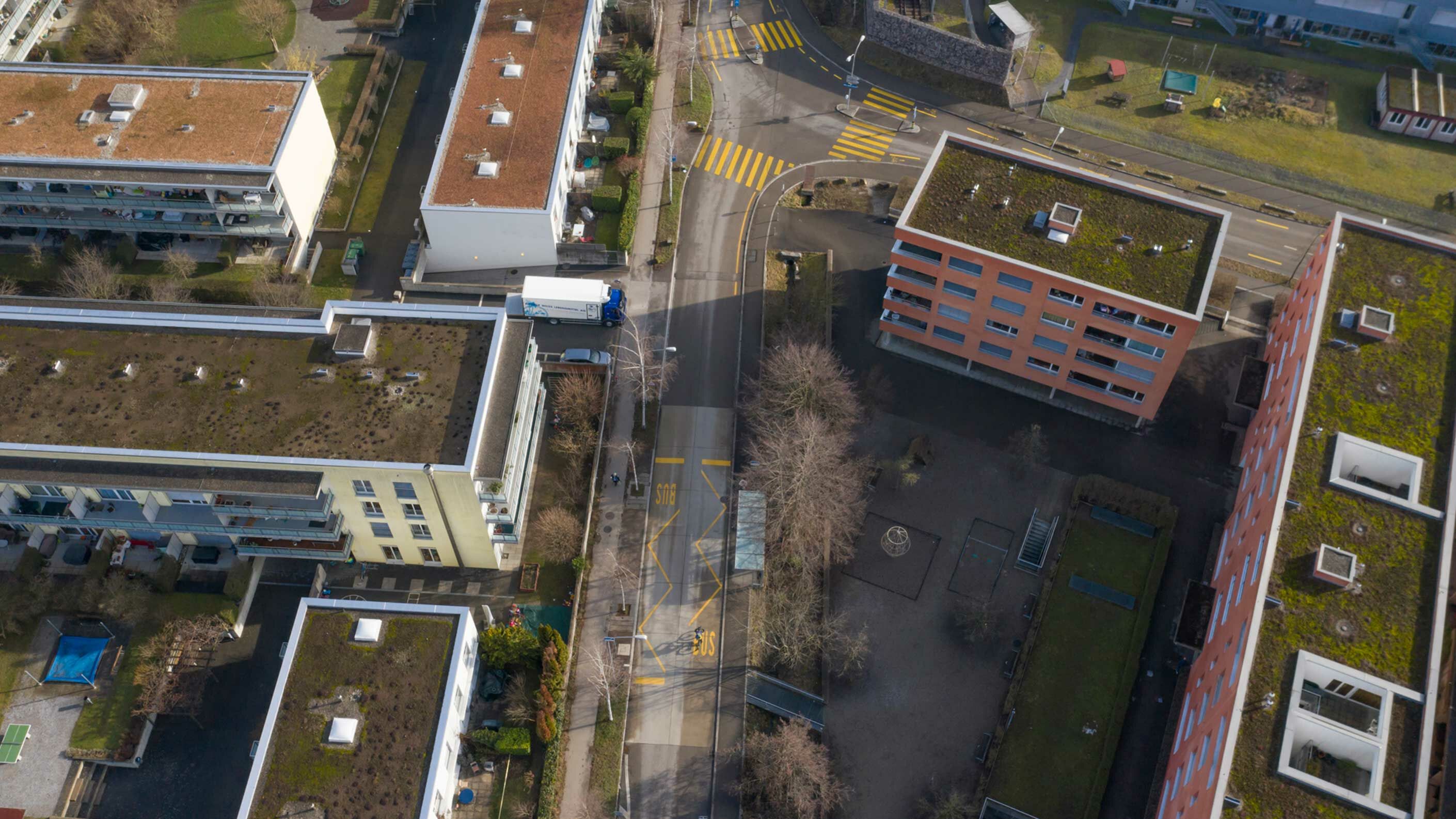 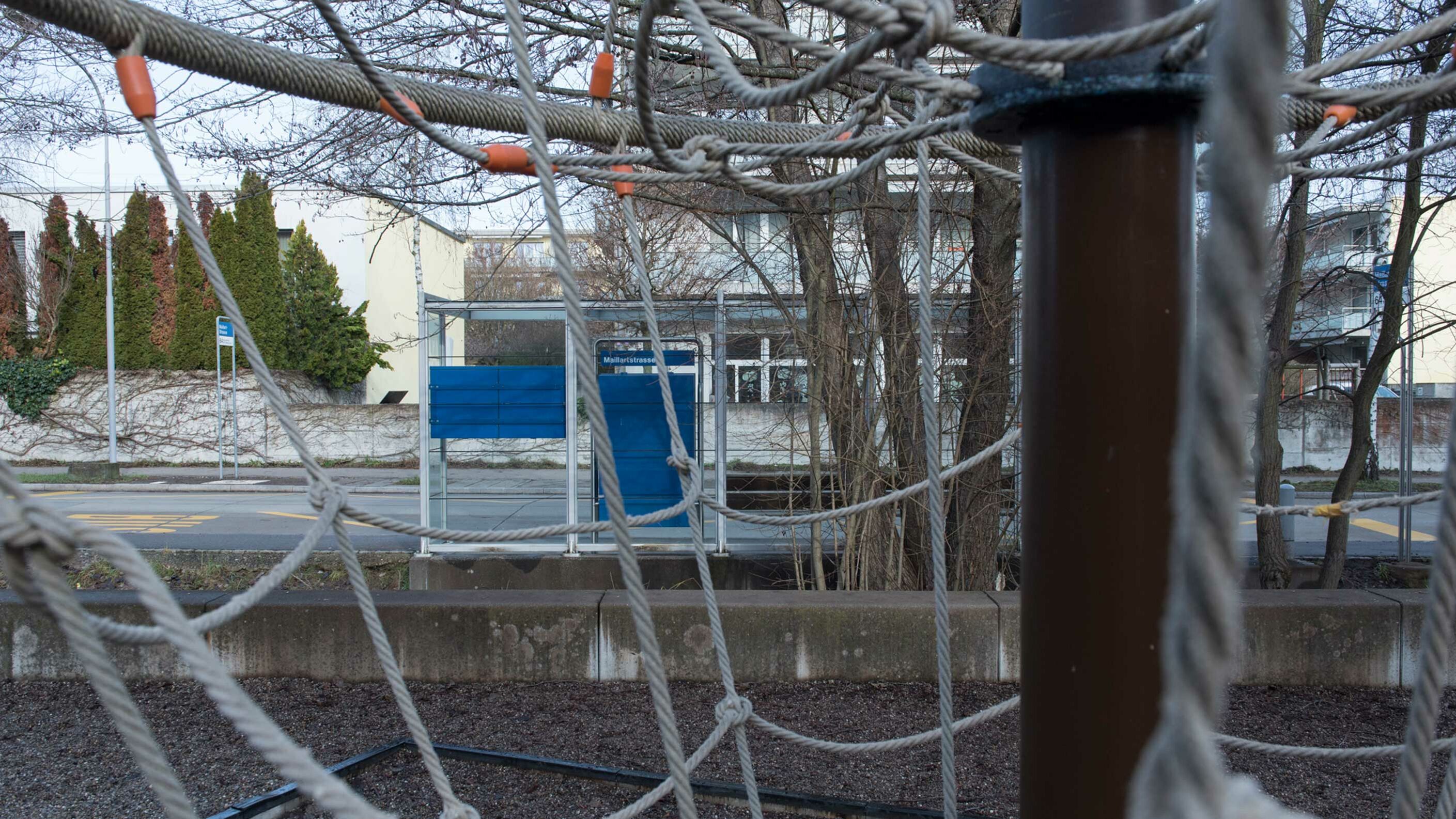 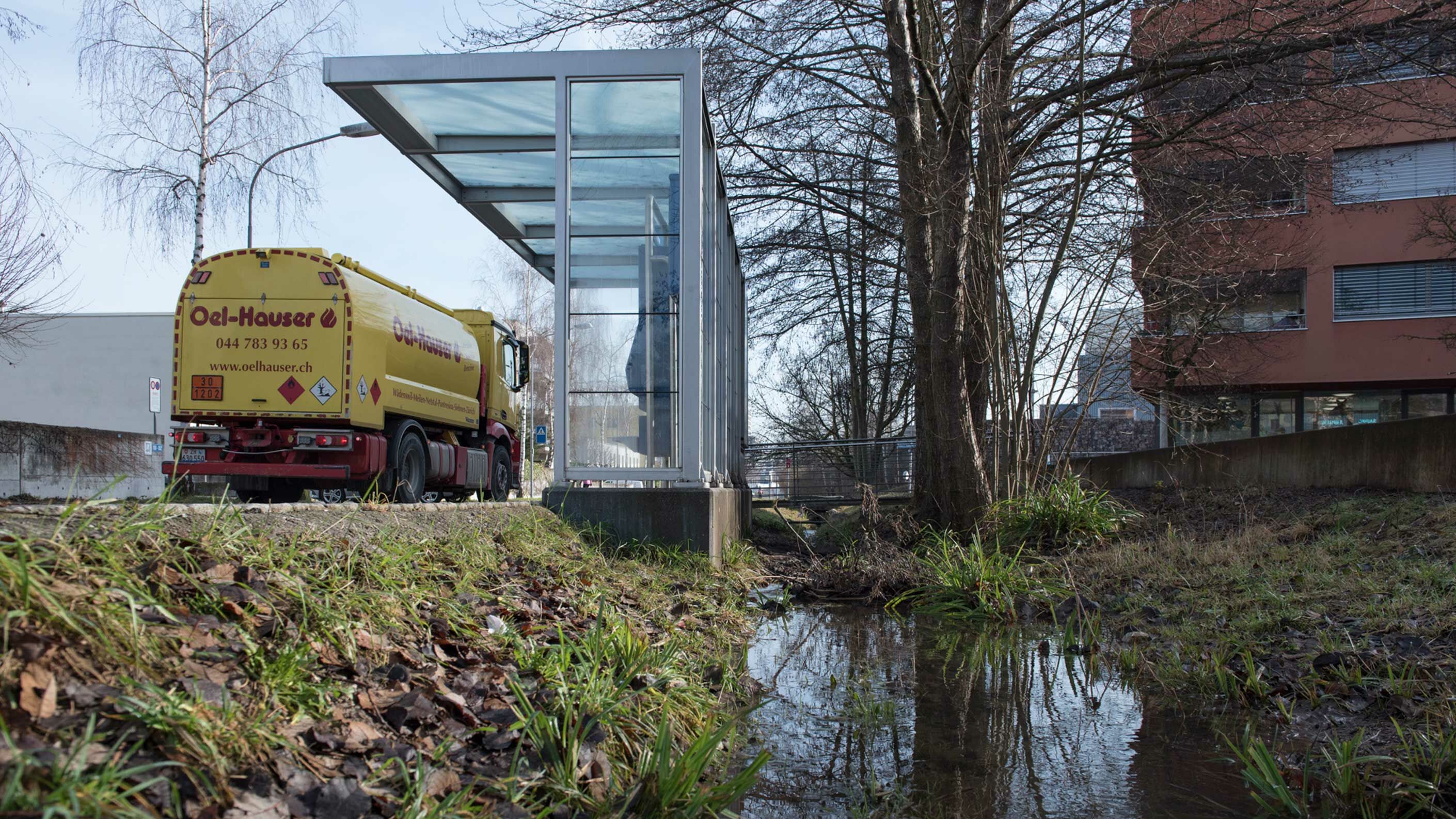 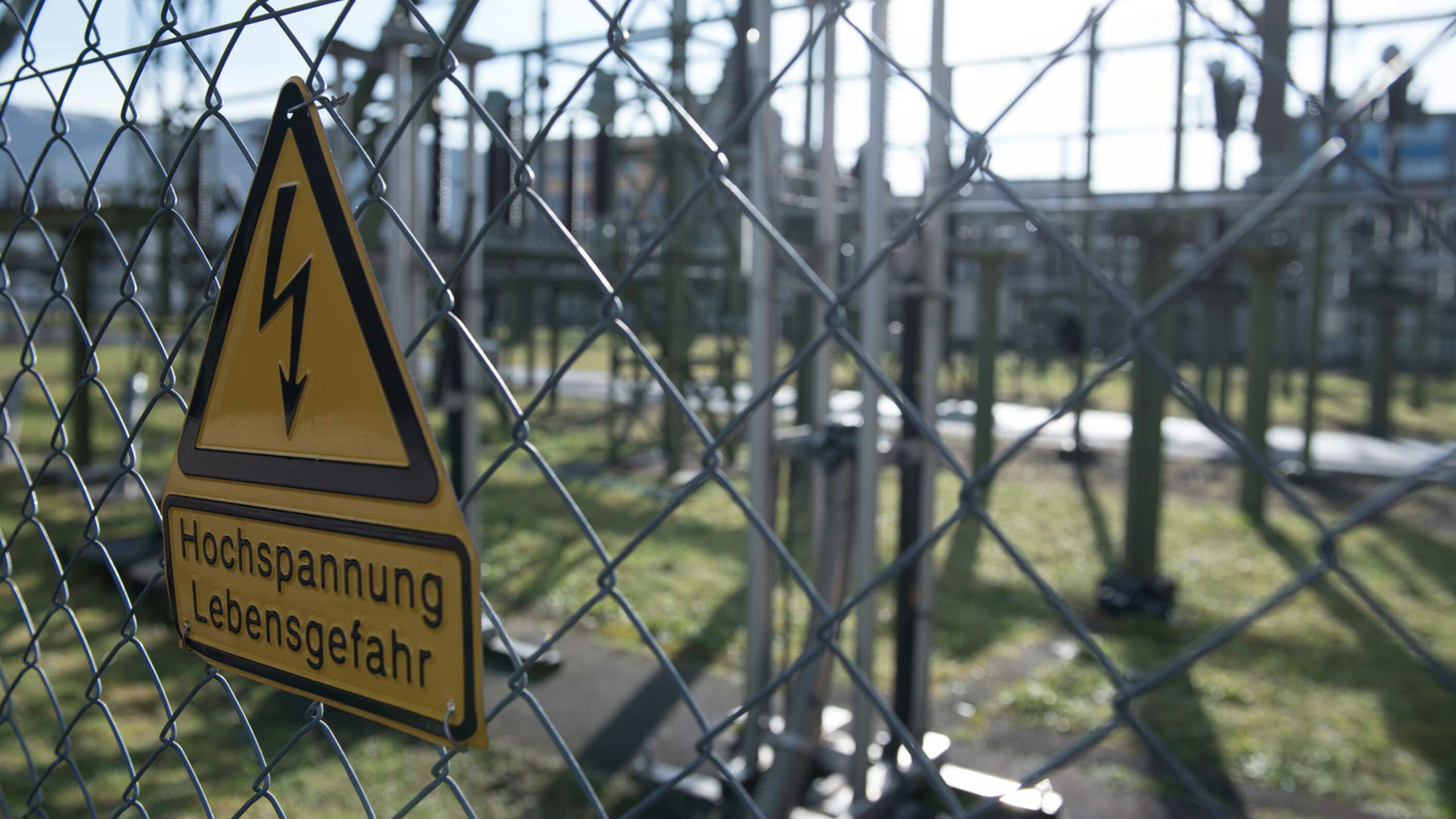 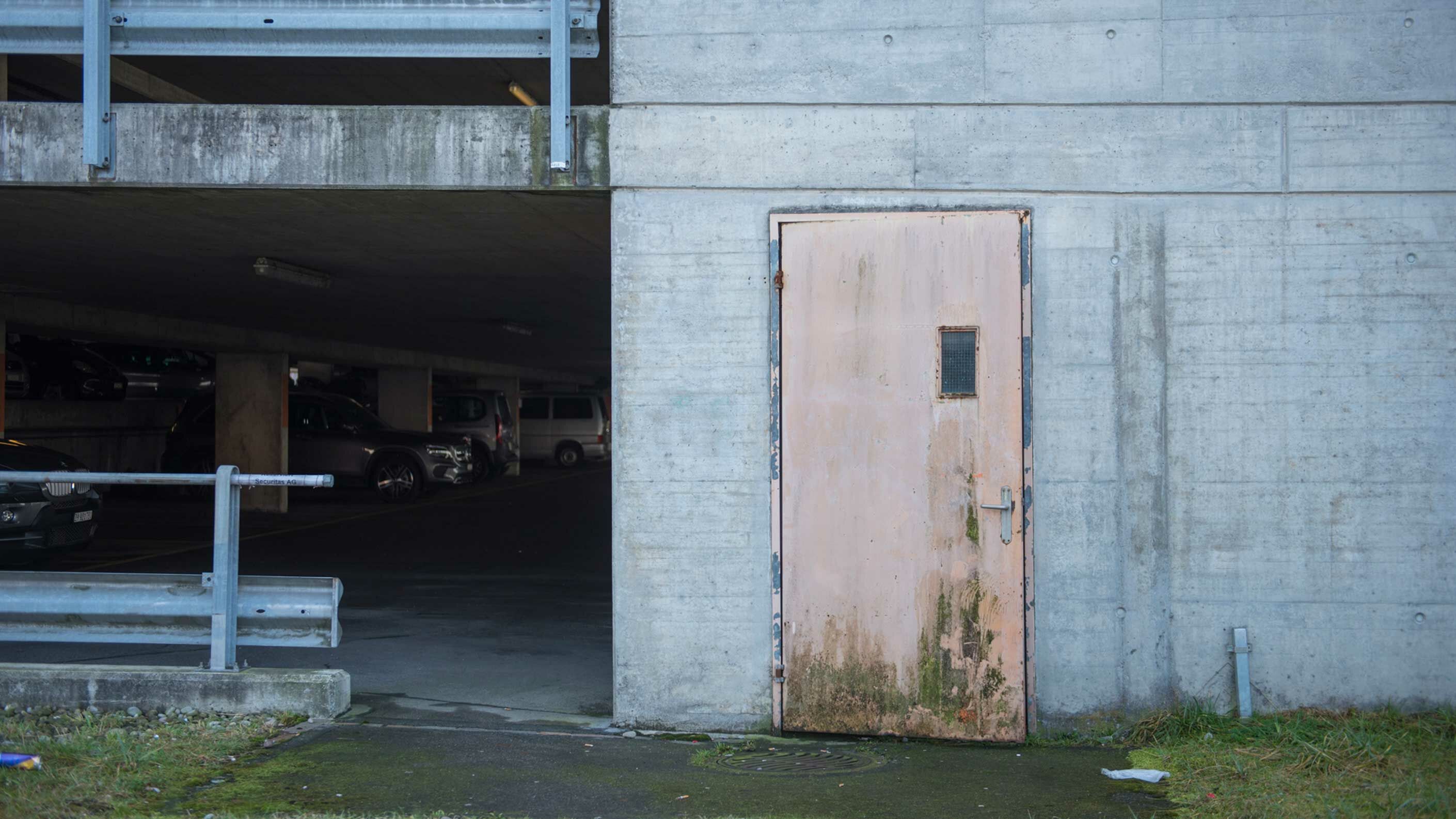 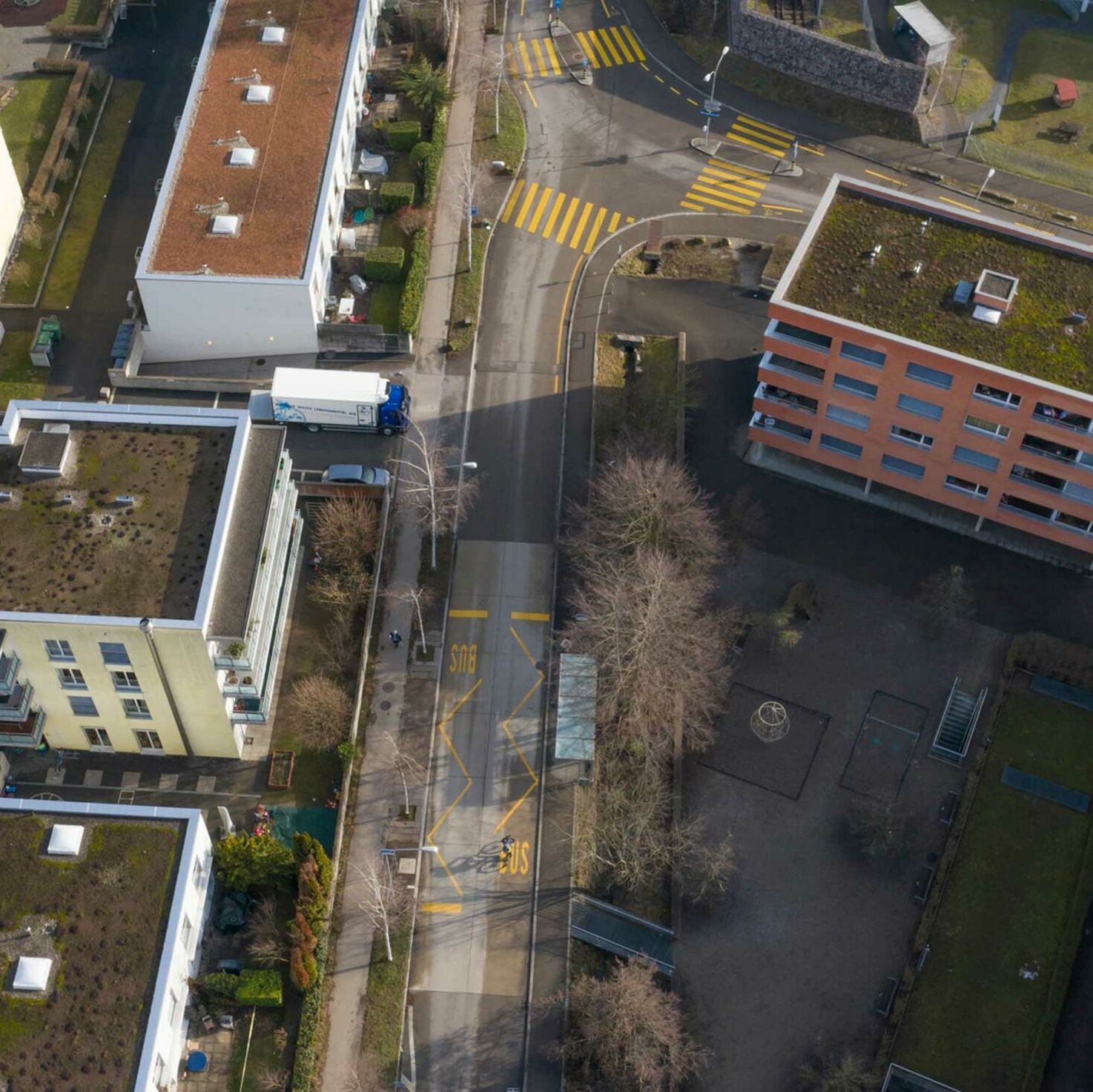 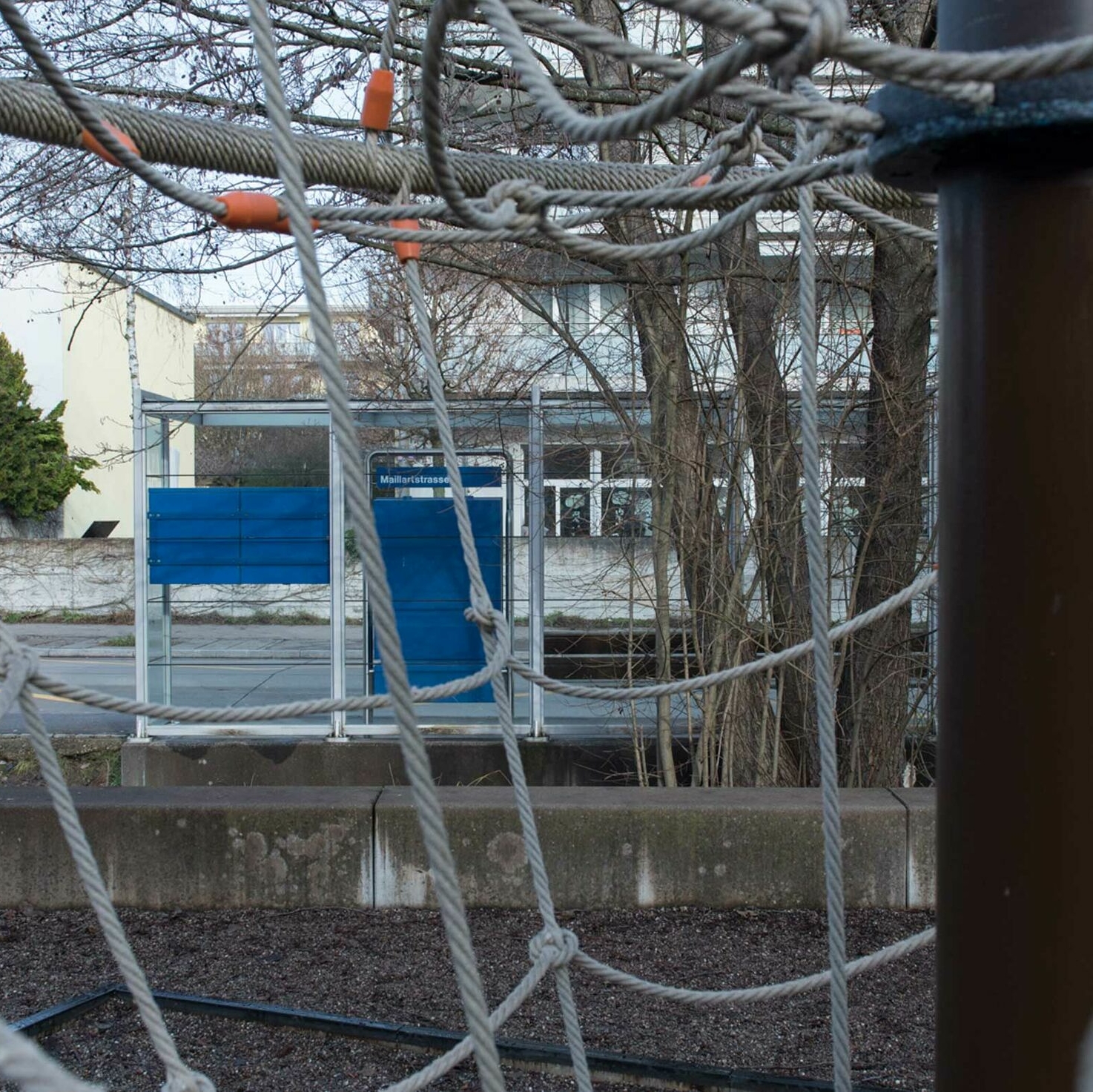 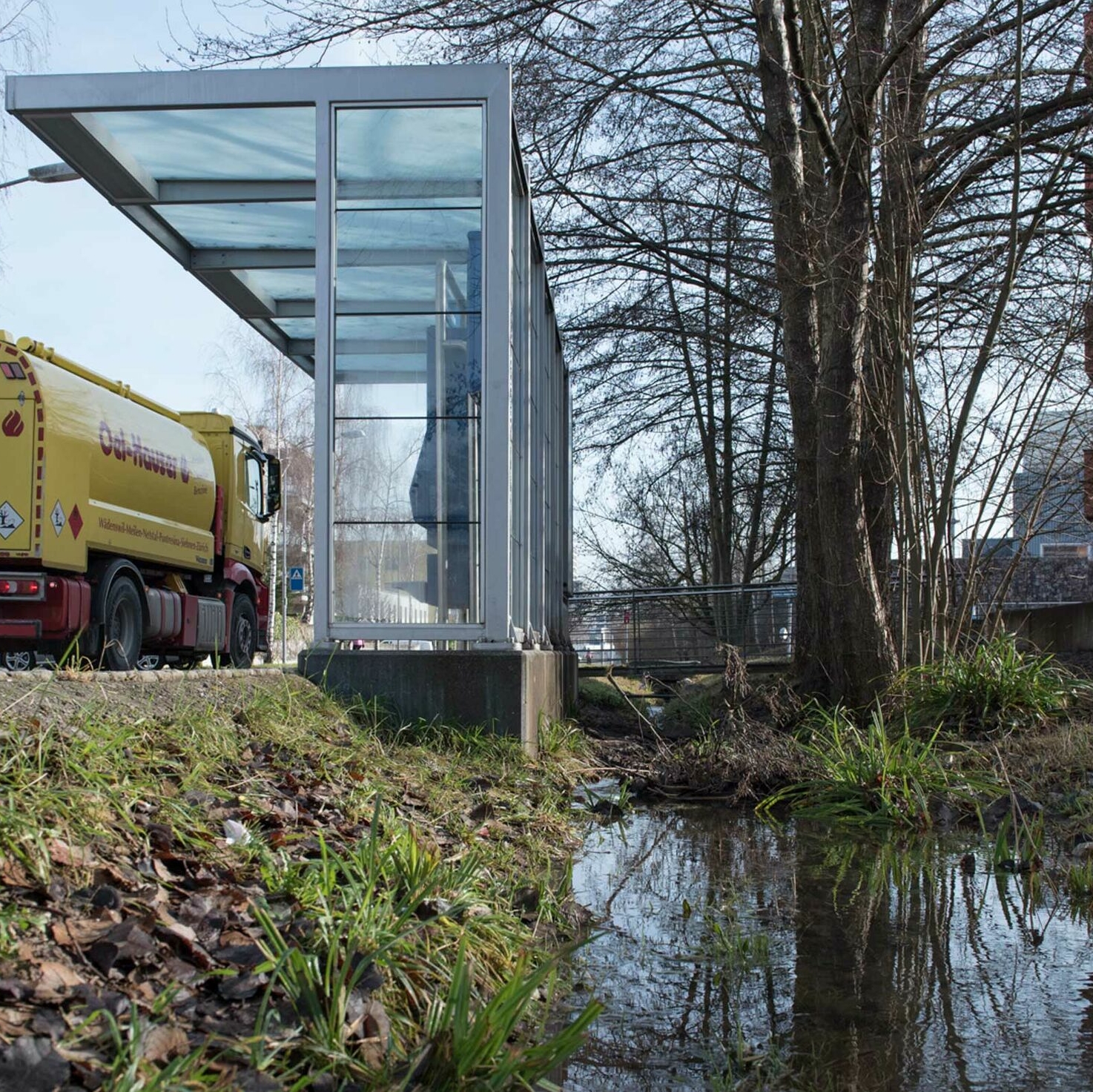 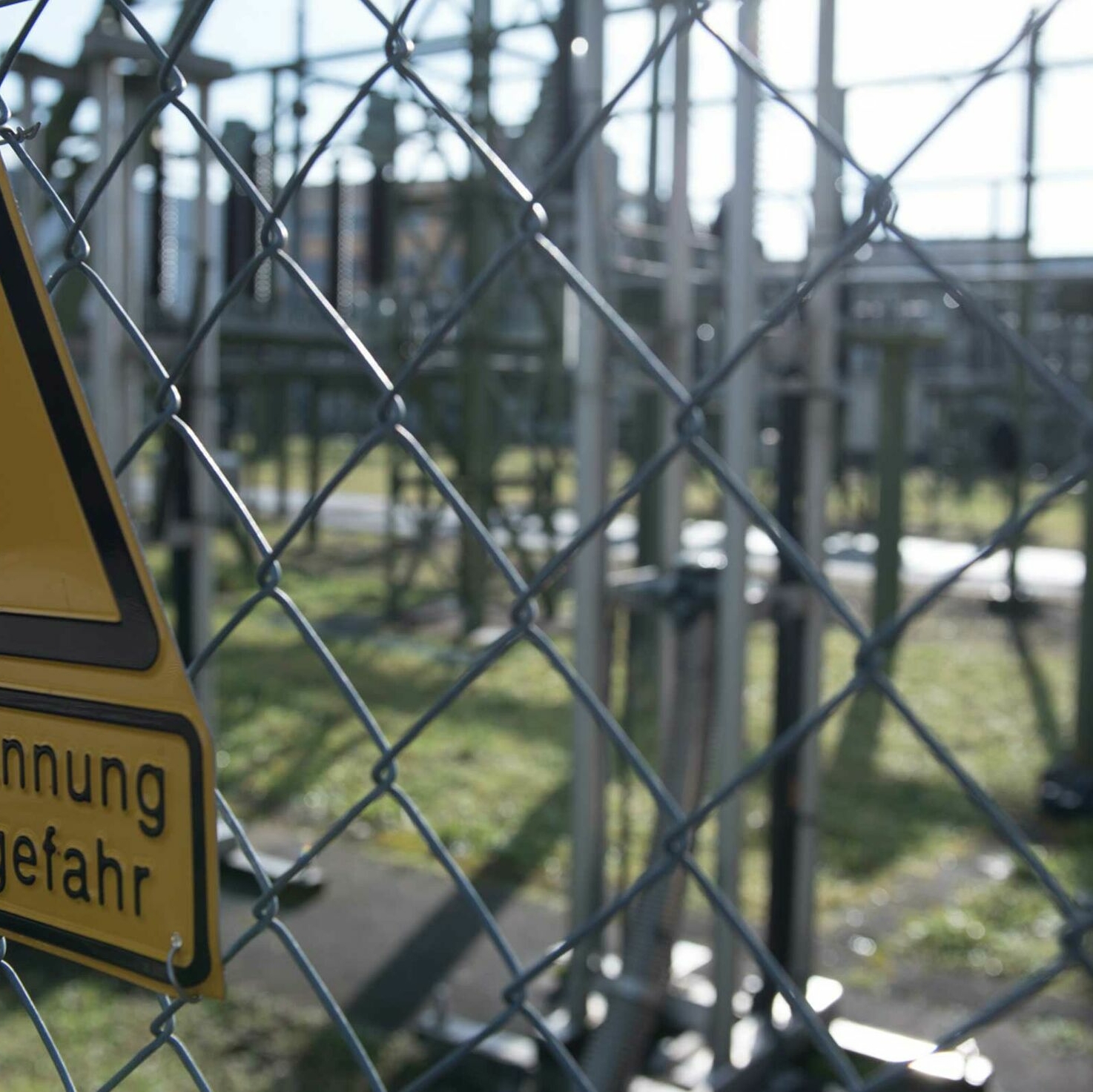 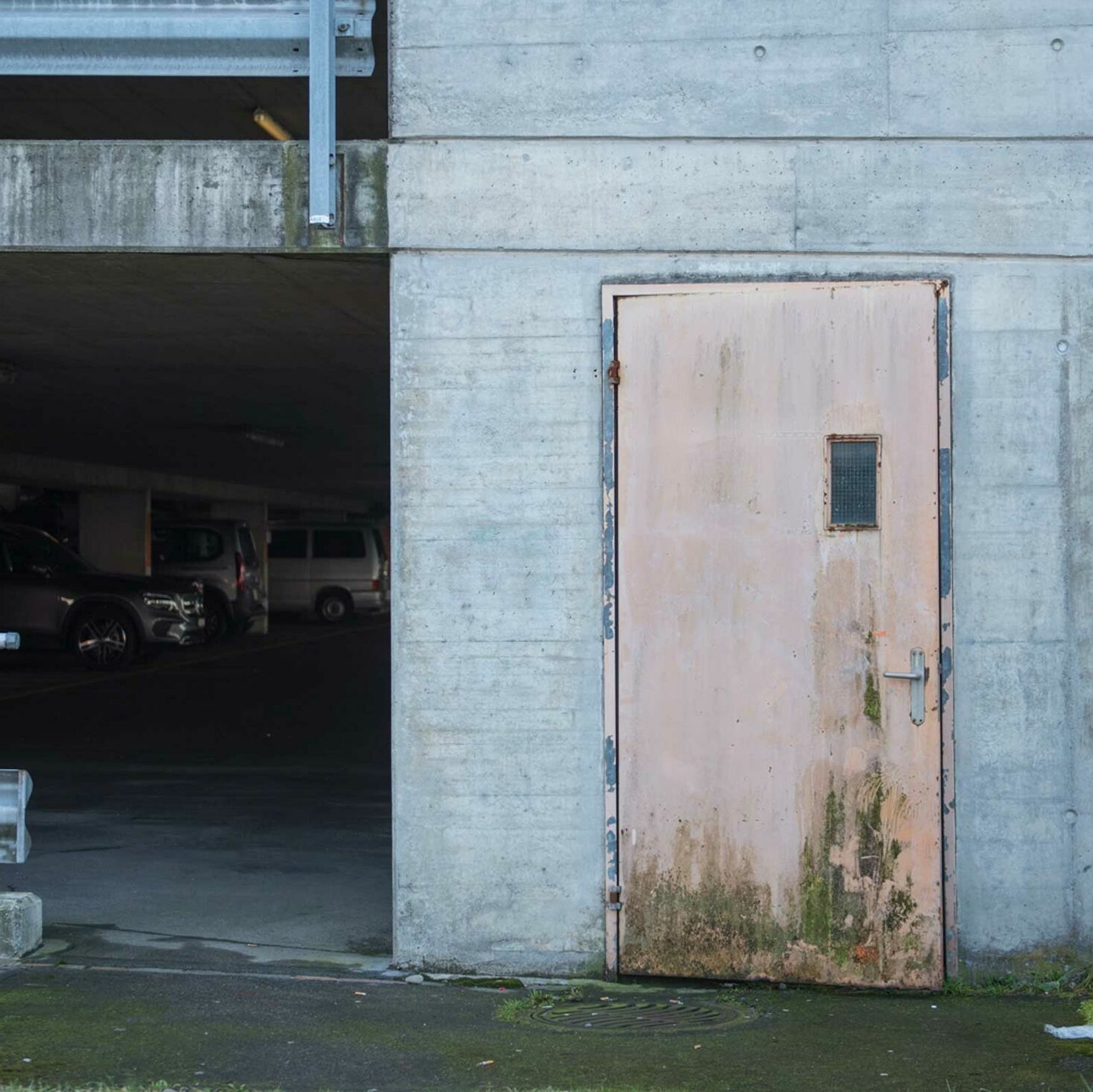 Just 5 stops and you’re on the edge of town

The number 64 bus carries passengers from Oerlikon station to the terminus at Maillart-Strasse. It’s good that there’s a local bus – but it’s also worth walking around the towering buildings of this former industrial area if you’re interested in learning more about the city’s history.

Just five stops and you’re there. Yet Oerlikon – now such an urban area – feels miles away. Like Oerlikon, the area has its blocks of flats and kindergartens, and the Maillart-Strasse stop is wedged between two tall buildings. There’s also a triangular gravel playground with a climbing frame. A little stream, the Binzmühlebach, flows along between the road and the playground. It may be just a trickle, but it’s a very nice one – crystal clear and adorned with aquatic plants.

Along the pavement, a couple of footbridges cross over the stream. The stark yet bucolic location of the terminal actually has no direct link to Robert Maillart. But, as you’ll find out, there’s a connection of sorts.

This terminus doesn’t need a turning loop because there’s a little roundabout just ten metres from the bus stop. There’s just enough room for the bus to turn, as long as the driver goes up on the pavement.

As a pedestrian, you feel rather small and insignificant here.

Bus route 64 has been running for 20 years. In 2001, the VBZ responded to the population growth in the centre of Zurich North by improving its public transport services. The number 64 bus began running every 15 minutes. The blank spots on the public transport map may have been the main reason for establishing the Maillart-Strasse terminus and bus route 64. According to VBZ spokesman Tobias Wälti, a public transport gap exists if more than 300 people live more than 400 metres from a stop, as the crow flies.

Today, the number 64 bus runs through an area with an industrial past. This is also reflected in the size of the buildings, which make you feel rather small as soon as you walk away from the bus stop. You soon learn to keep an eye out for signs saying dead end, because the simple grid layout is deceptive. Like a maze, the first path is not always the best route to your destination.

Heavy industry departed and service businesses moved in, as evidenced by the signs that adorn the office blocks and complexes. The Toro Building is an office complex whose trademark sculpture is reminiscent of the New York Stock Exchange. But it actually refers to the Stierenried, a marsh that once existed when Oerlikon was still a farming village. The wetland was bought by Maschinenfabrik Oerlikon, an engineering firm that later merged with BBC and finally with the Swedish-Swiss multinational ABB. ABB retains its presence in the district, including the Oerlikon substation built jointly with EWZ, which is particularly eco-friendly thanks to its use of cutting-edge technology.

The bull reminds us that Oerlikon was once a farming village.

Although the scale of the buildings makes you feel uncomfortable at first, this neighbourhood still has a human face. Just around the corner from the terminus, a ‘second-chance shop’ is located in a former factory. It sells second-hand goods and helps its workers to regain a foothold in the labour market. A three-metre-tall statue of Zwingli wearing a face covering is a reminder of the anniversary of the Reformation that was celebrated a few months back with fibreglass Zwinglis all over the city.

Zwingli is one of the historical figures who appears on the map of the VBZ route network. He is joined by Segantini, Bürkli, Rudolf Brun and Bernoulli. The names of the stops usually reflect the surrounding squares or streets, and here it’s no different. Robert-Maillart-Strasse branches off close to the terminus.

Robert Maillard may have lent his name to the bus stop, but he had no connection with the area.

Quite simply, Zurich North seems to like naming streets after people. You can almost walk the length of bus route 64 along such streets. Start by following Therese-Giehse-Strasse to Max-Bill-Platz. Then continue along Armin-Bollinger-Weg, turn left and take a few steps along Brown-Boveri-Strasse, then turn into Eduard-Imhof-Strasse. The next street that crosses your path is Robert-Maillart-Strasse.

According to the Zurich city archives, first names began to appear on street signs in the 1920s. Whereas in the past a simple Zwinglistrasse or a Gessnerallee would have done the trick, today you’re more likely to come across a Hans-Behn-Eschenburg-Weg.

All the famous people on the signs, often pioneers in their fields, have a connection to Zurich but not to the particular neighbourhood. This is also the case with Robert Maillart (1872–1940): He was an engineer who graduated from the ETH Zurich and later worked for the municipal civil engineering office. He was born in Bern and died in Geneva.

He specialised in bridges, but not bridges over little streams. Reinforced concrete was a new material at that time, and bridges with elegant arches began to appear. Maillart built a few such bridges in the Alps, and one of his early works was in and for the city of Zurich: the Stauffacher Bridge with its two bronze lion pillars.

The number 64 bus runs between Oerlikon station and Maillart-Strasse. The journey takes about four minutes. For the timetable click here.