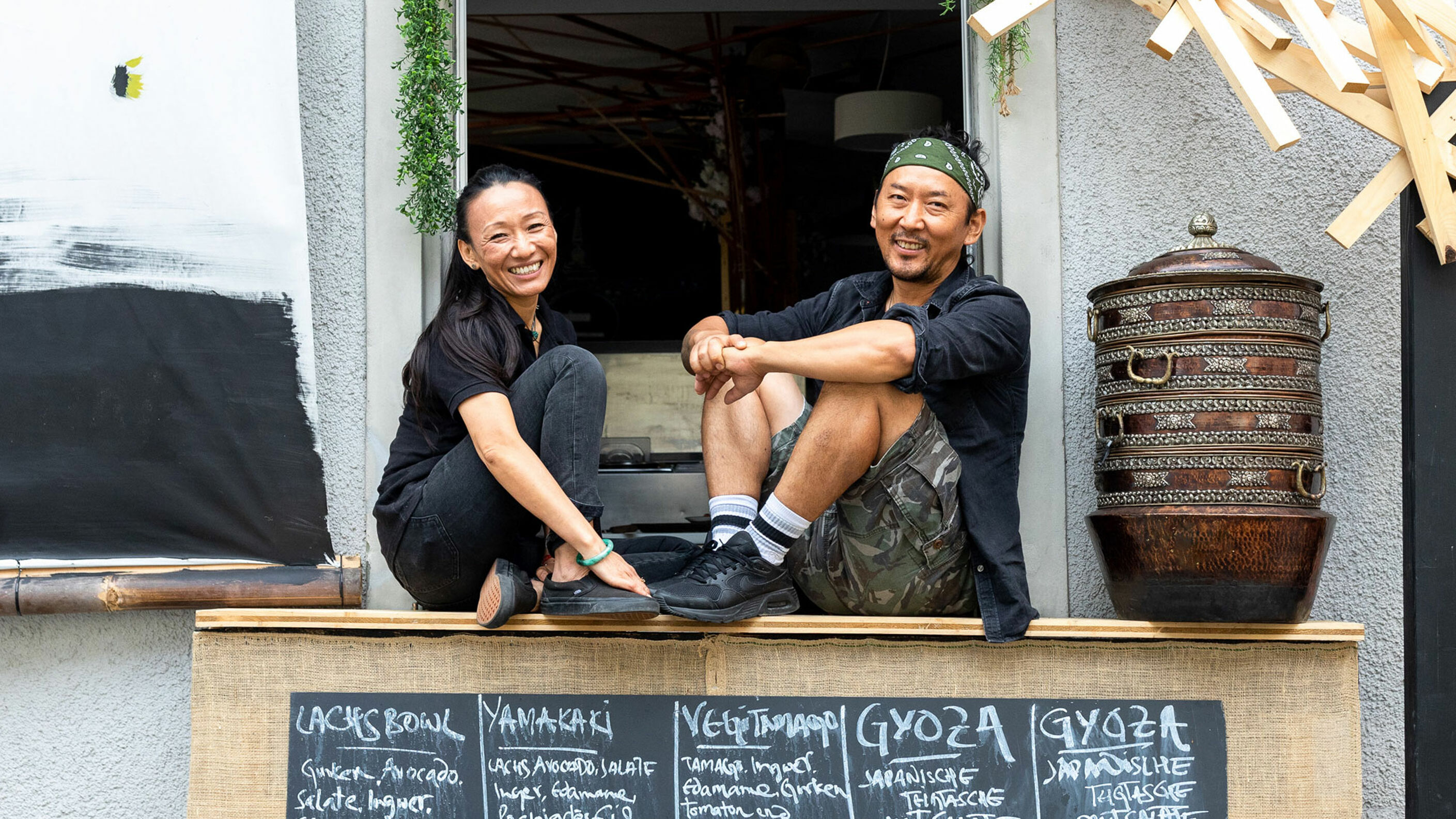 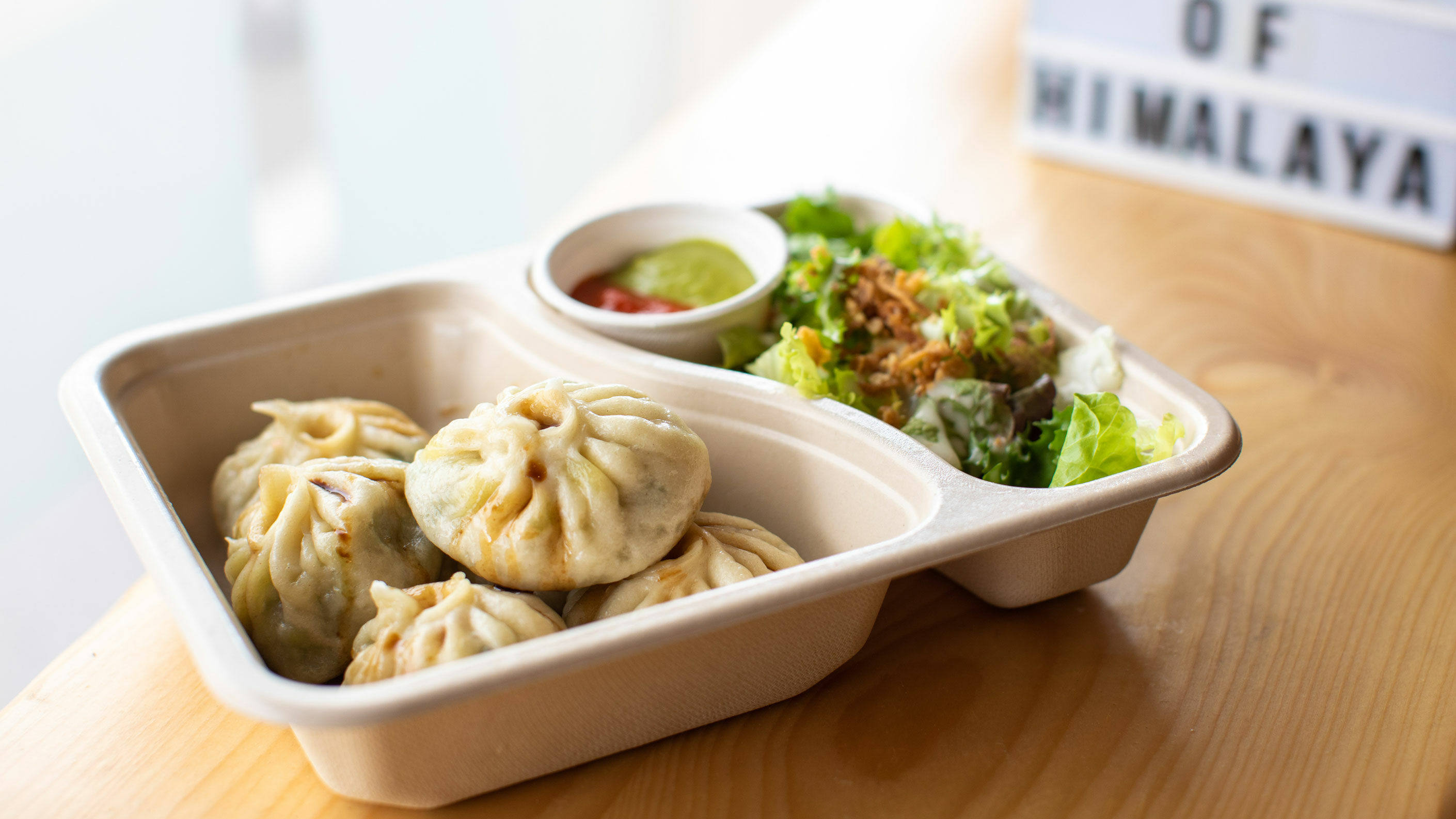 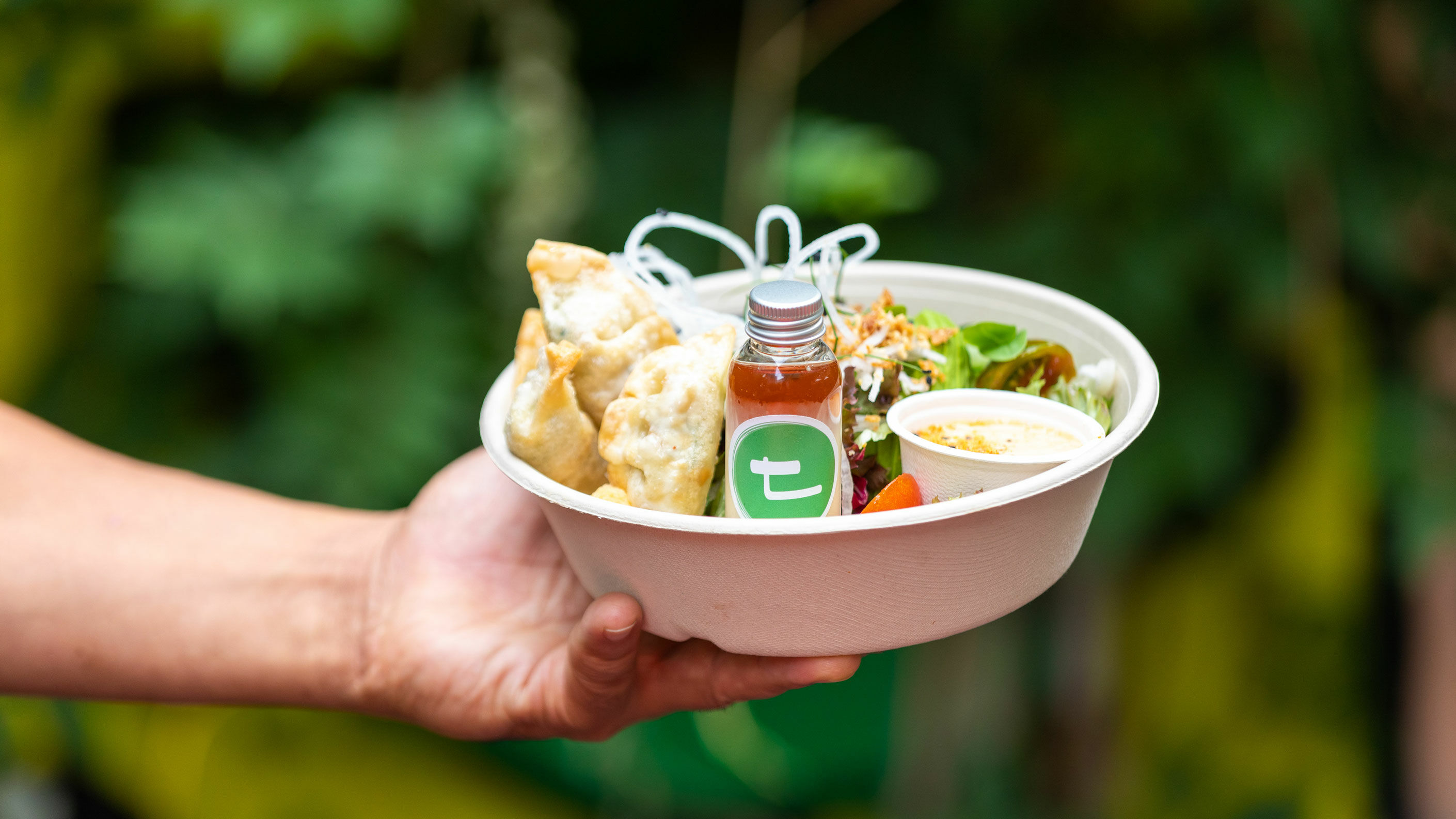 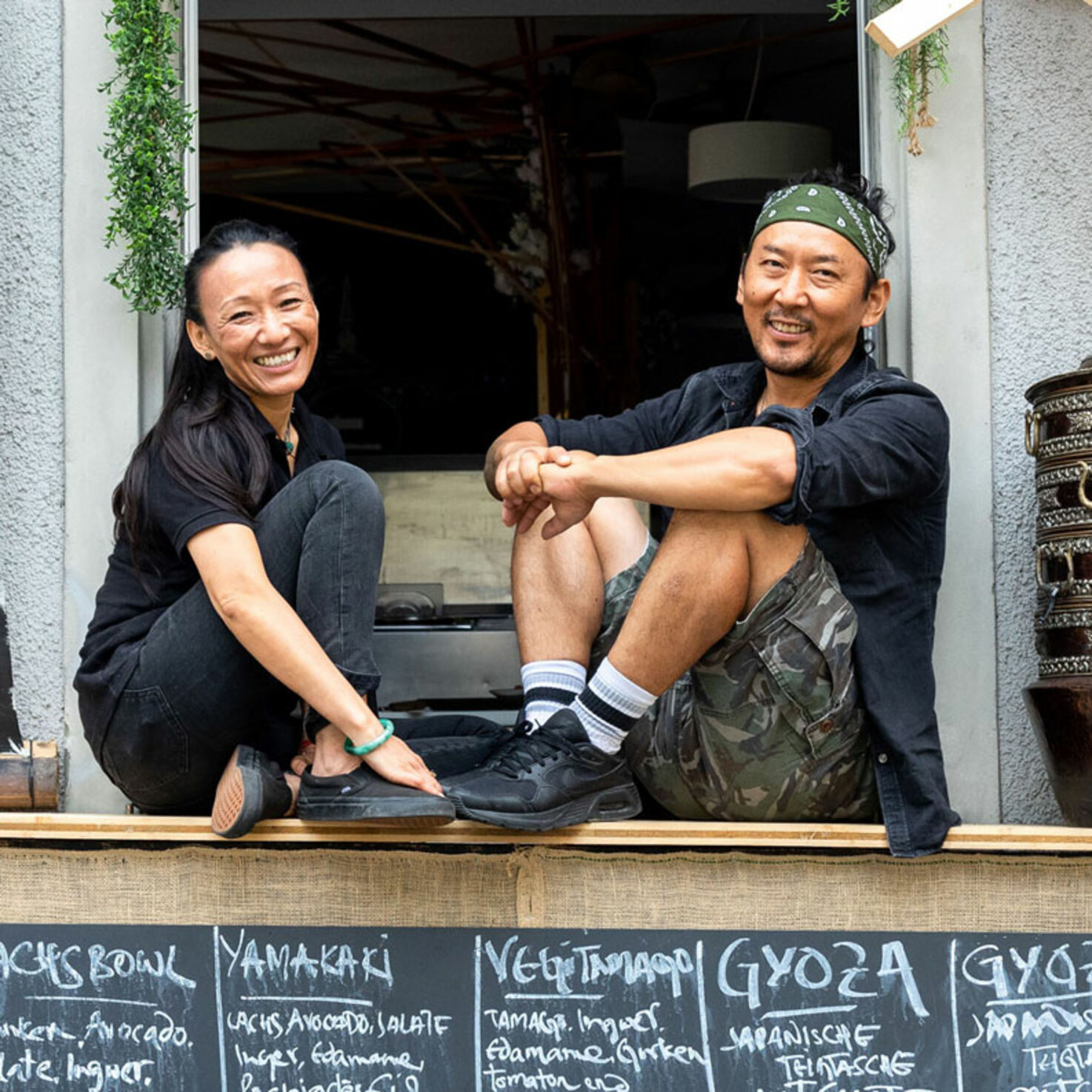 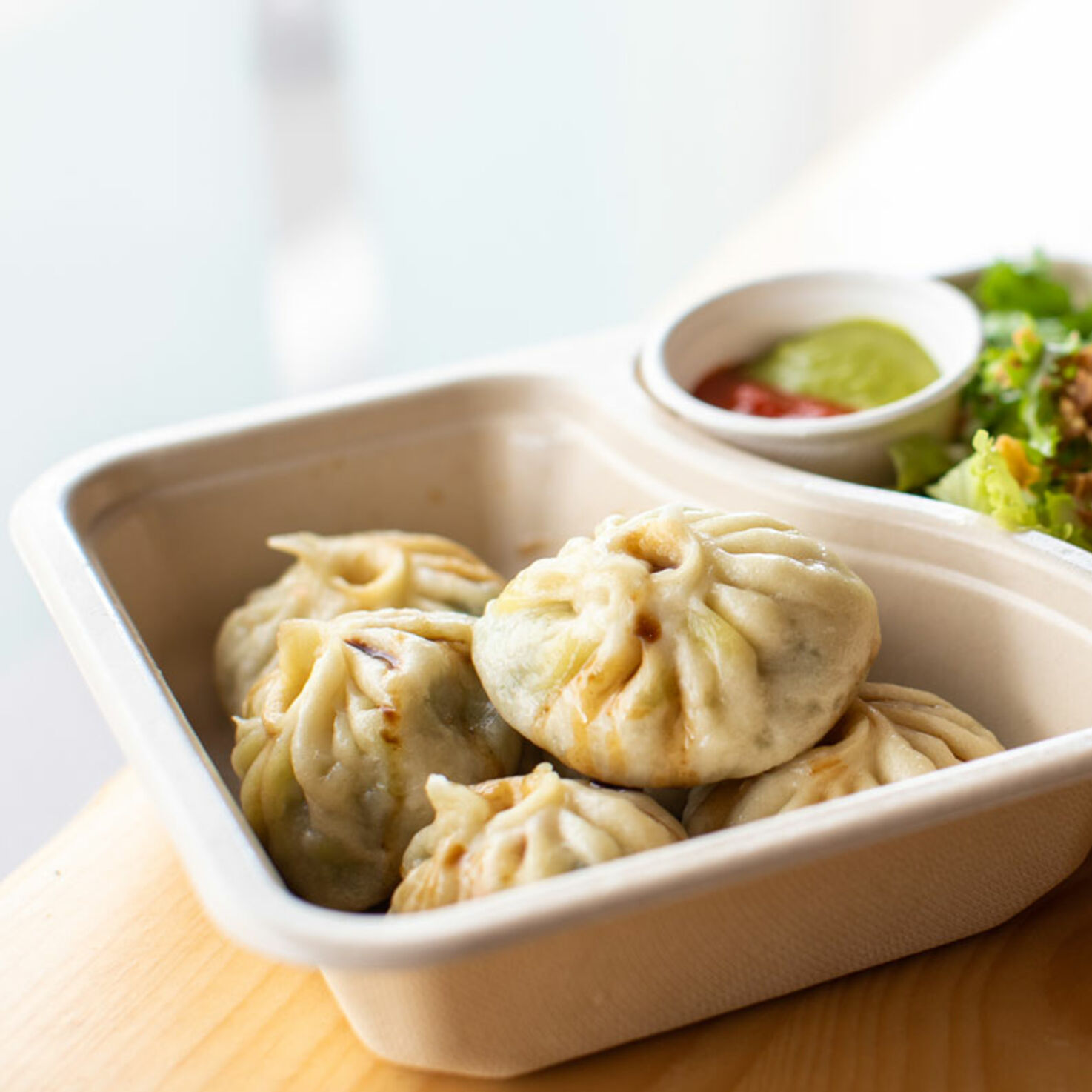 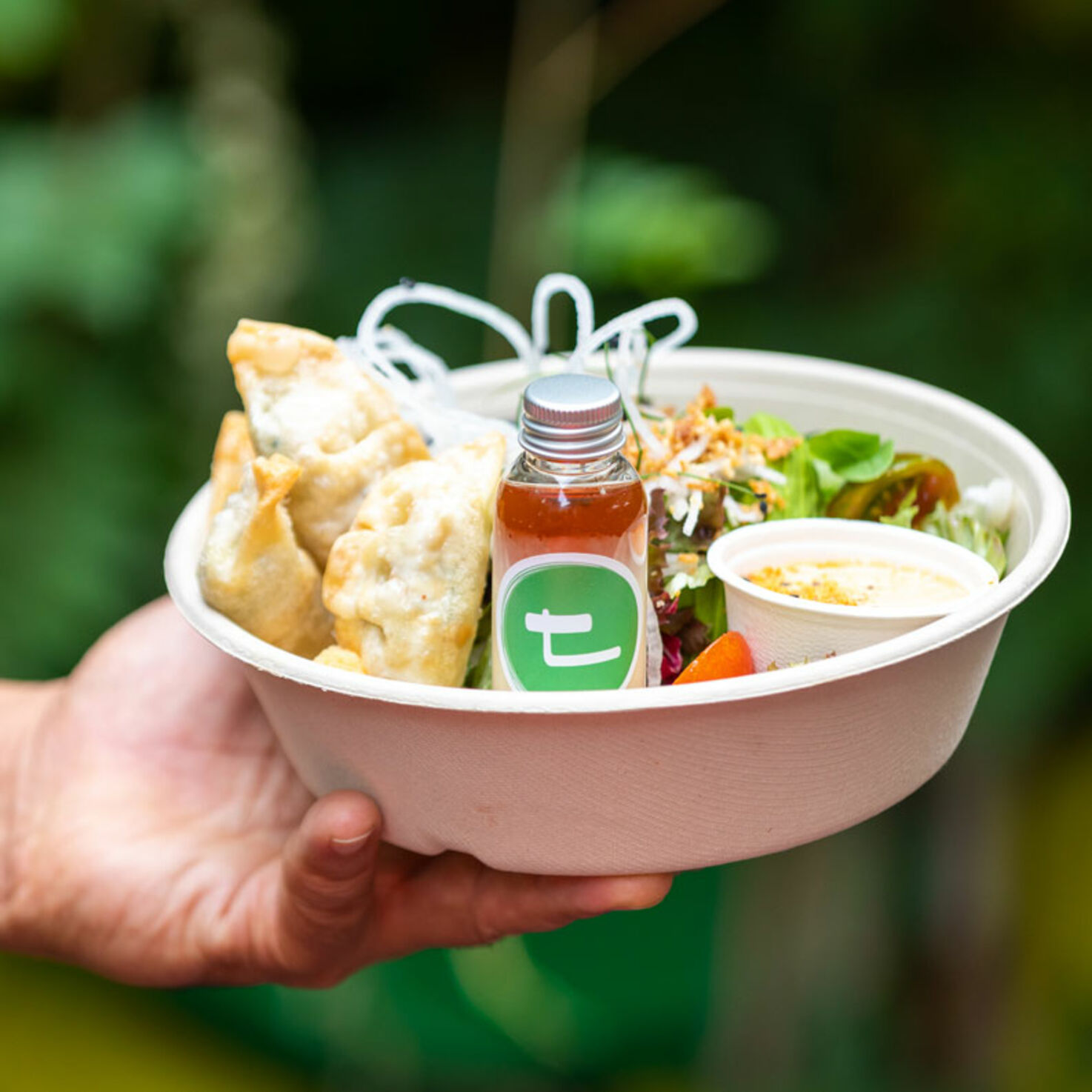 Momos with gruyere, and bowls with radishes from his own garden. Topden Phuntsok’s creations are not just incredibly tasty: most importantly, they tell a story.

Topden Phuntsok is head chef at Roots of Himalaya on Badenerstrasse 155, where he creates dishes that reflect his countless culinary influences – Tibet, India, Japan and Switzerland; momos, curry and bowls. His partner Tsering actively helps him – and sometimes stands alongside him in the kitchen.

If you walk along Badenerstrasse near Kalkbreite around midday or in the evening, you may well encounter a long queue of people, hungry and full of anticipation, looking forward to getting their hands on the coveted momos that await them at Roots of Himalaya. Head chef Topden Phuntsok and his team prepare three versions of the Tibetan classic here at Badenerstrasse 155 every day: filled dumplings with meat, a vegetarian version with spinach and gruyere or a vegan option with soya, cabbage and leaf spinach.

‘We also have fresh salads and curries, as well as our bowls with many variations,’ says Topden, who has lived in Switzerland since 2011. ‘Our philosophy is to offer good food that is also affordable for young people. We do not want to exploit our customers or lower our standards,’ says the head chef and owner of this delightful takeaway.

‘I never forgot my Tibetan roots.’

Topden was born the son of Tibetan refugees in northern India and spent his early years there. He trained as a cook in India. Later, his life took him to Thailand, Japan and Dubai, where he perfected his skills and got to know new flavours and dishes. ‘But I never forgot my Tibetan roots. They are part of me, and that is also the reason for the name Roots of Himalaya,’ he says. Nevertheless, Topden adds, all his other influences are also reflected in his cuisine. Many things come together in Topden’s creations, and he is not afraid to try out things and mix up ingredients that, according to culinary dogma, do not seem to belong together.

‘Our curry, for example, is a mixture of typically Indian and Thai recipes. I like to play about with different cuisines,’ he explains. It is for this reason, he says, that gruyere comes to be in his vegetarian momos, that he moderates his hot sauces a little with a creamy guacamole and that a peppery radish from his own garden sometimes ends up in his fish bowls.

After he met Tsering, who is now his partner, Topden decided to move to Switzerland. Tsering, who grew up in Zurich, now helps actively at Roots of Himalaya. She deals mainly with marketing and back-office work. ‘But this does not mean that I am not sometimes busy at the counter or in the kitchen. We are a small team, and everybody helps everybody else,’ Tsering explains.

The business that Topden and she launched really took off at Open Air Gampel a few years ago. They were able to take their food truck there to cook for the hungry masses – and were literally overrun. More than 250,000 hand-rolled momos were passed over the counter during that event. ‘We were overwhelmed by the crush. With the takings from that, we were able in 2018 to open up our first shop, Topden Bowl, at Körnerstrasse 10 in Zurich, just a stone’s throw from the present-day Roots of Himalaya, Topden recalls.

Everything was going perfectly – or so it seemed. ‘But then along came the coronavirus and lockdown. We didn’t know what it would mean for our restaurant,’ Tsering says. Luckily, they were able to continue offering takeaways, so the momos and bowls still made their way into hungry mouths. ‘Our customers gave us a huge amount of support,’ she adds. Then, in December 2020, the shop where Roots of Himalaya now stands became vacant. It was much bigger than the takeaway nearby on Körnerstrasse.

‘And,’ Tsering goes on, ‘it had an open kitchen. That was a key argument in favour of taking on the new, second shop. We wanted to show people that we prepare everything freshly.’ At Topden Bowl, Topden and his team continue to create colourfully mixed, seasonal bowls. ‘And at Roots of Himalaya, our momos, in particular, are going brilliantly,’ she says. With two shops just a few steps apart, it sometimes happens that Topden will be working in the takeaway nearby and will then quickly hop over to Roots of Himalaya and check that everything is going as it should in the kitchen there.

To get the truck restored, Topden actually drove all the way to Barcelona.

During lockdown, Topden also decided to buy a new food truck, so as to be able to more easily reach places where people wait hungrily for his bowls and momos. To get the truck restored, Topden actually drove all the way to Barcelona, got it converted there, and then drove it back. ‘Driving the food truck to Catalonia was a spontaneous decision, taken almost on impulse. I had no idea whether it would work. As I was coming out of a tunnel on the way back, a beautiful rainbow appeared in front of me, and I took that as a kind of sign that I was on the right course. I called Tsering at once and told her about it,’ Topden recalls with a smile.

It is important to Topden, Tsering and the whole team at Roots of Himalaya that things should be seasonal and fresh. For this reason, they harvest as much as possible from their own garden in Seebach. The rest comes from the Hägeli company in Altstetten. ‘We now get on with the people in charge there almost like we are family,’ Topden says. Apart from fresh, healthy food, there is one thing, above all, that the team at Roots of Himalaya want to offer: ‘We want people to feel at ease here,’ Tsering says. ‘When I was young, I often had the feeling in Zurich that people went to restaurants to see and be seen. That is not important to us,’ she explains. Rather, she wants people to come to Roots of Himalaya and be themselves, without high heels or any pretence. ‘Our aim is that people should come here to have a good time and enjoy good food,’ she says. That means good food from Tibet – or India, Thailand or Japan. Simply good food.