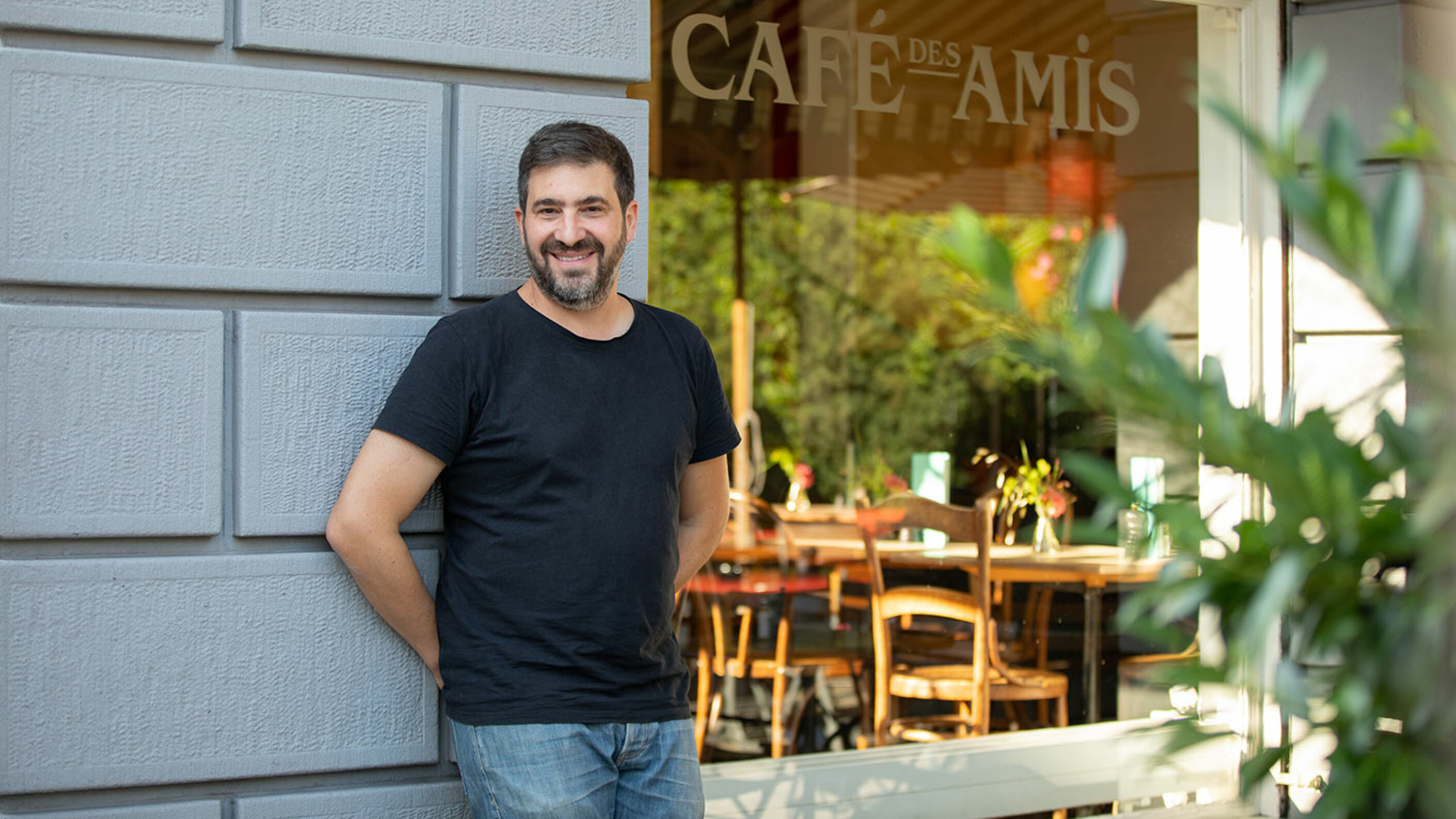 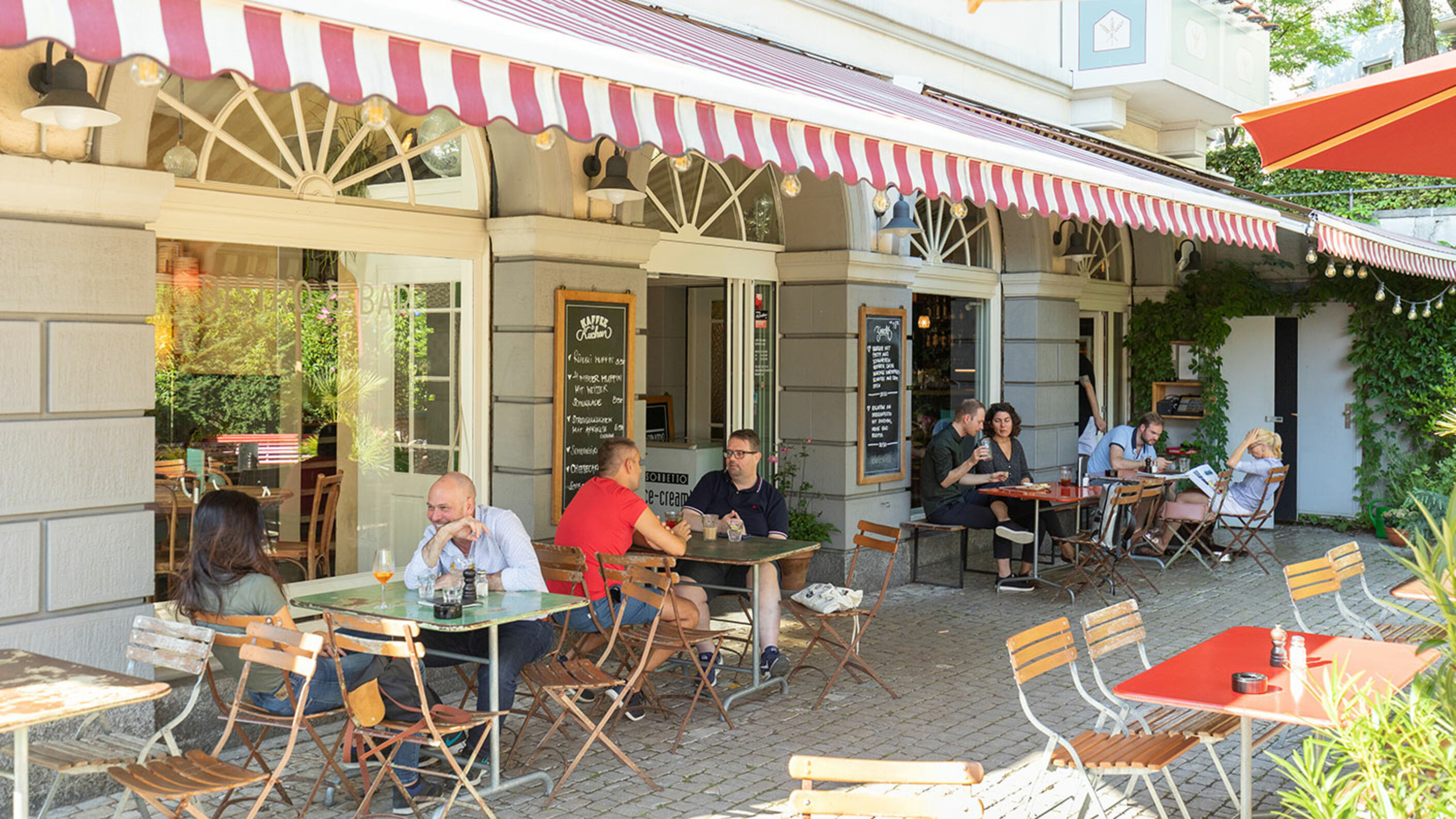 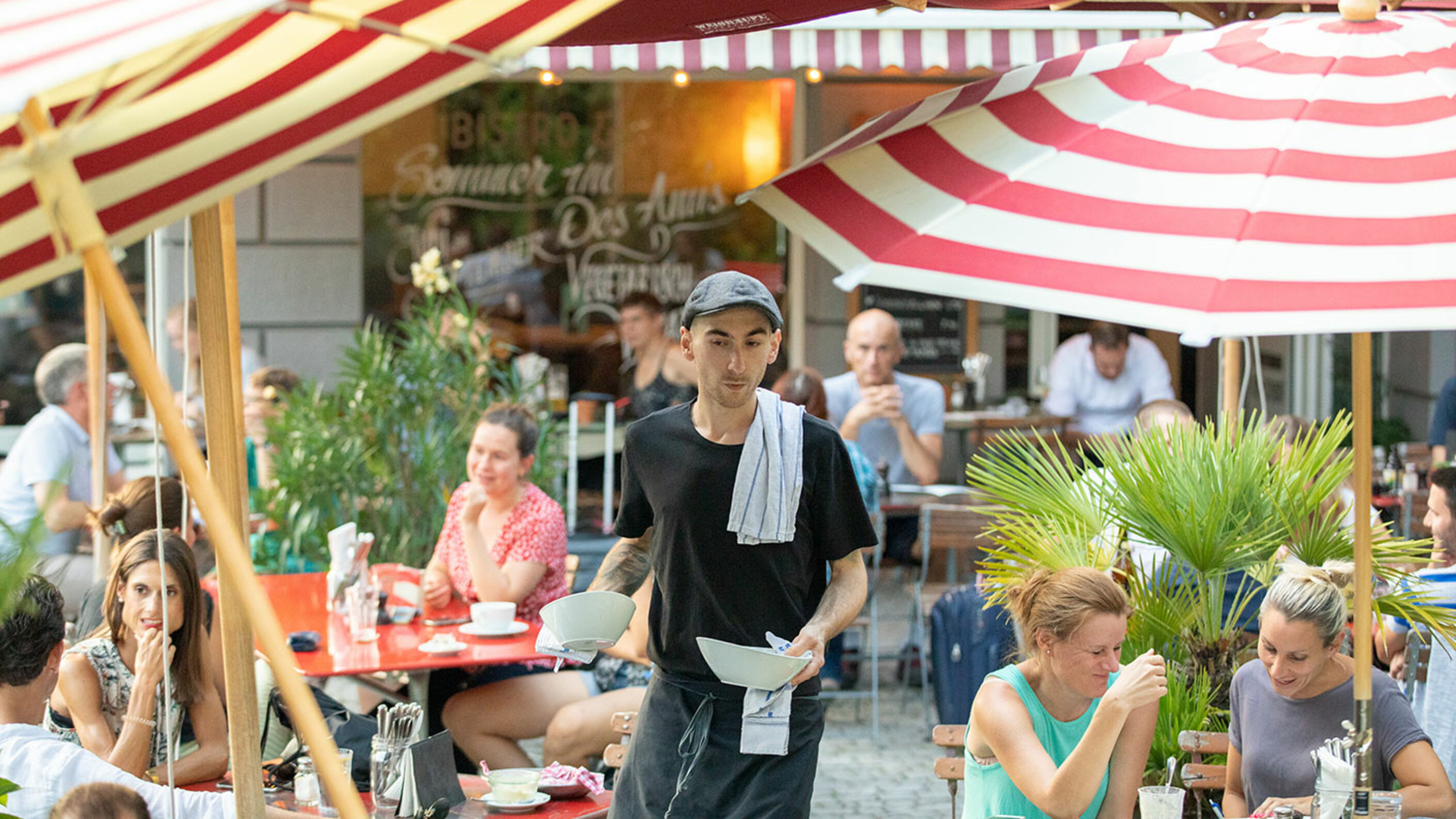 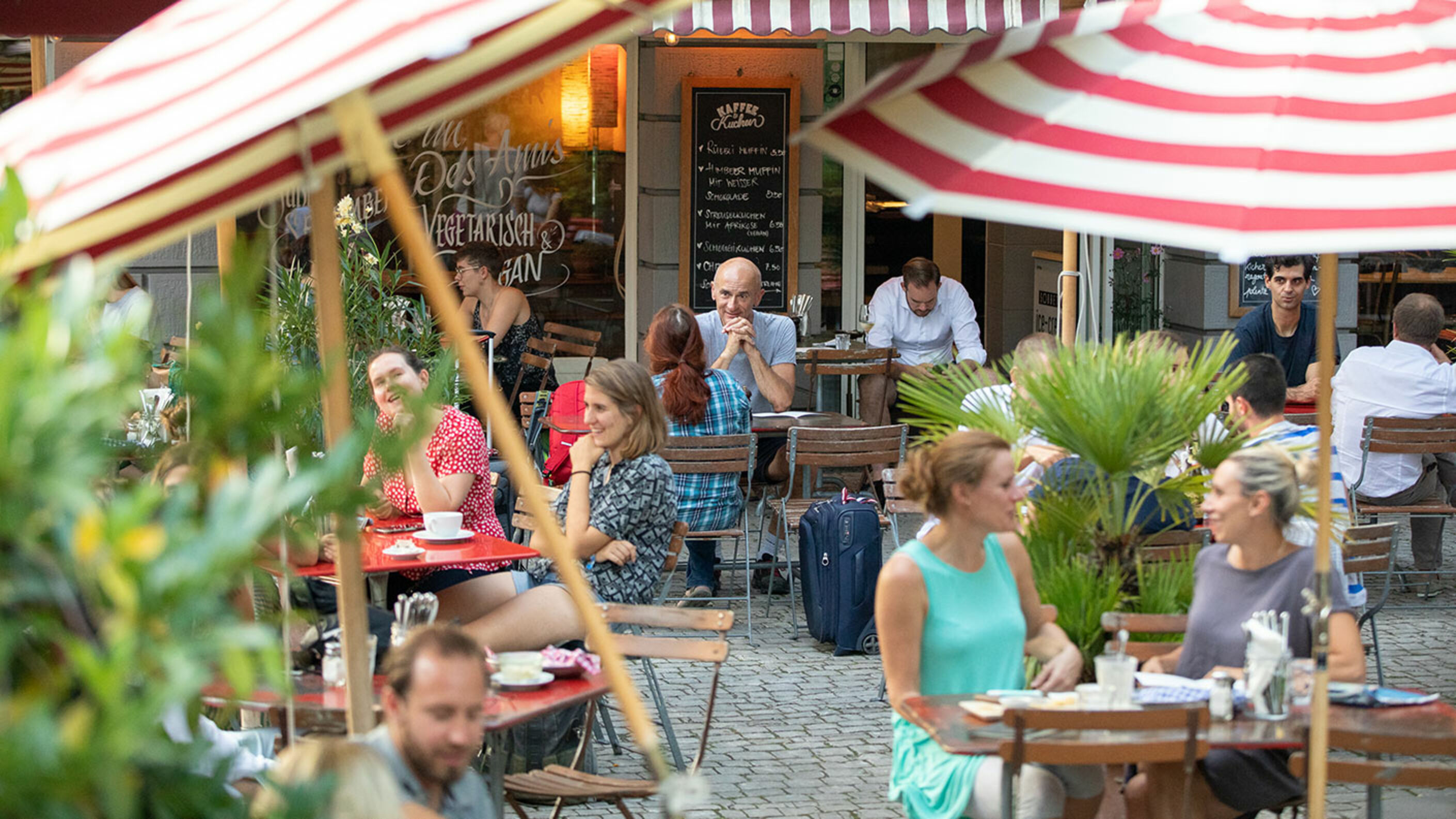 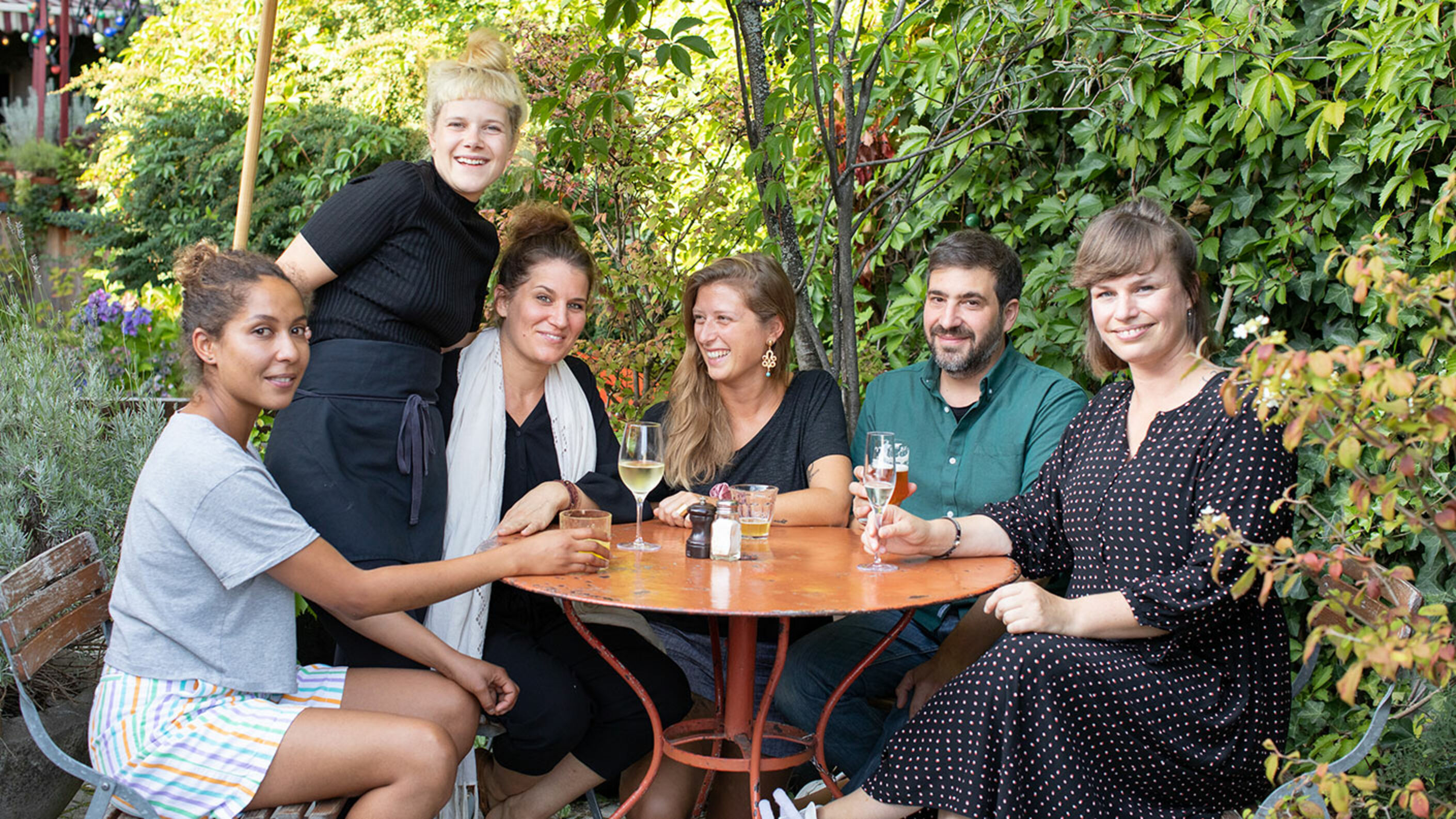 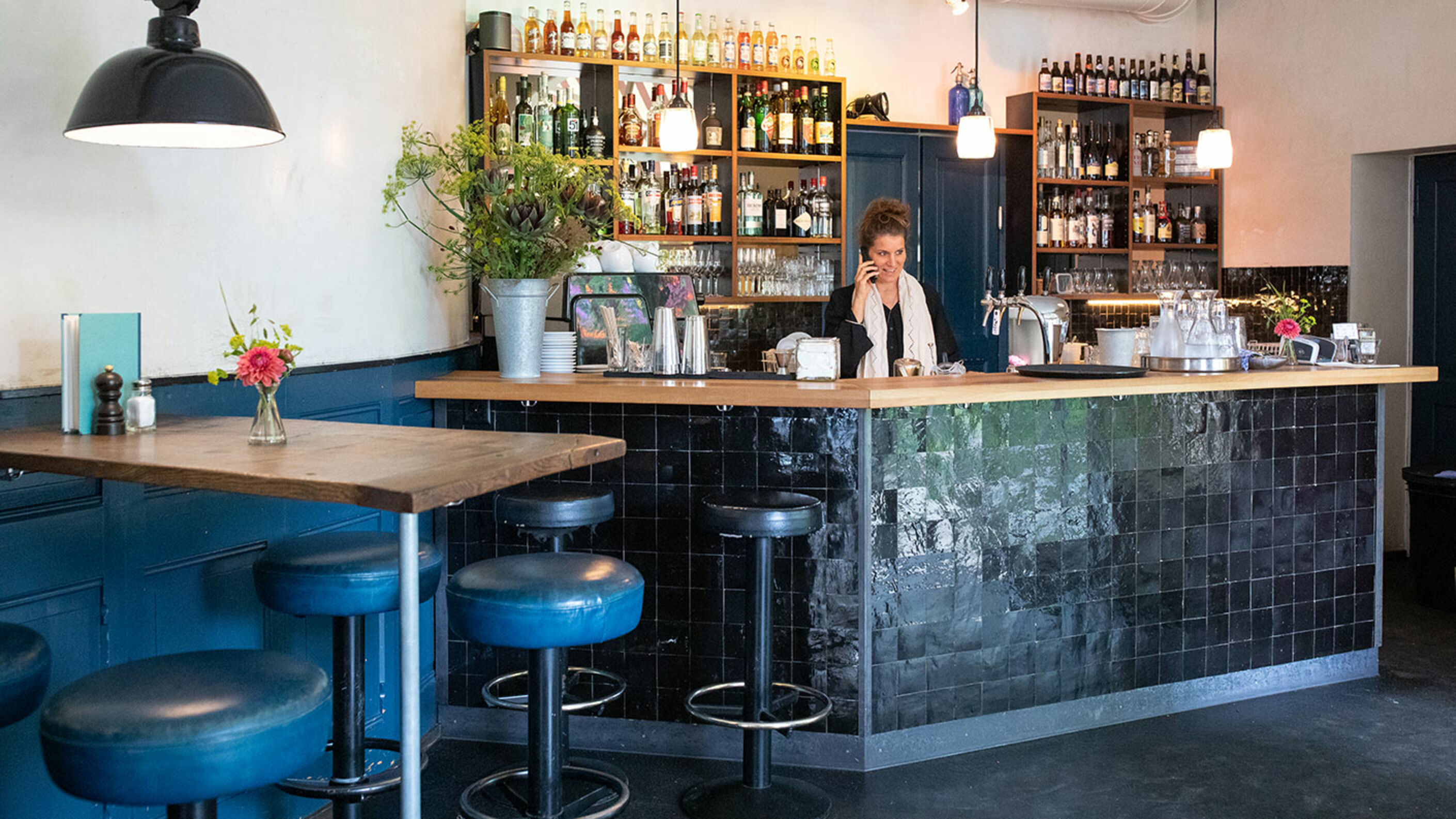 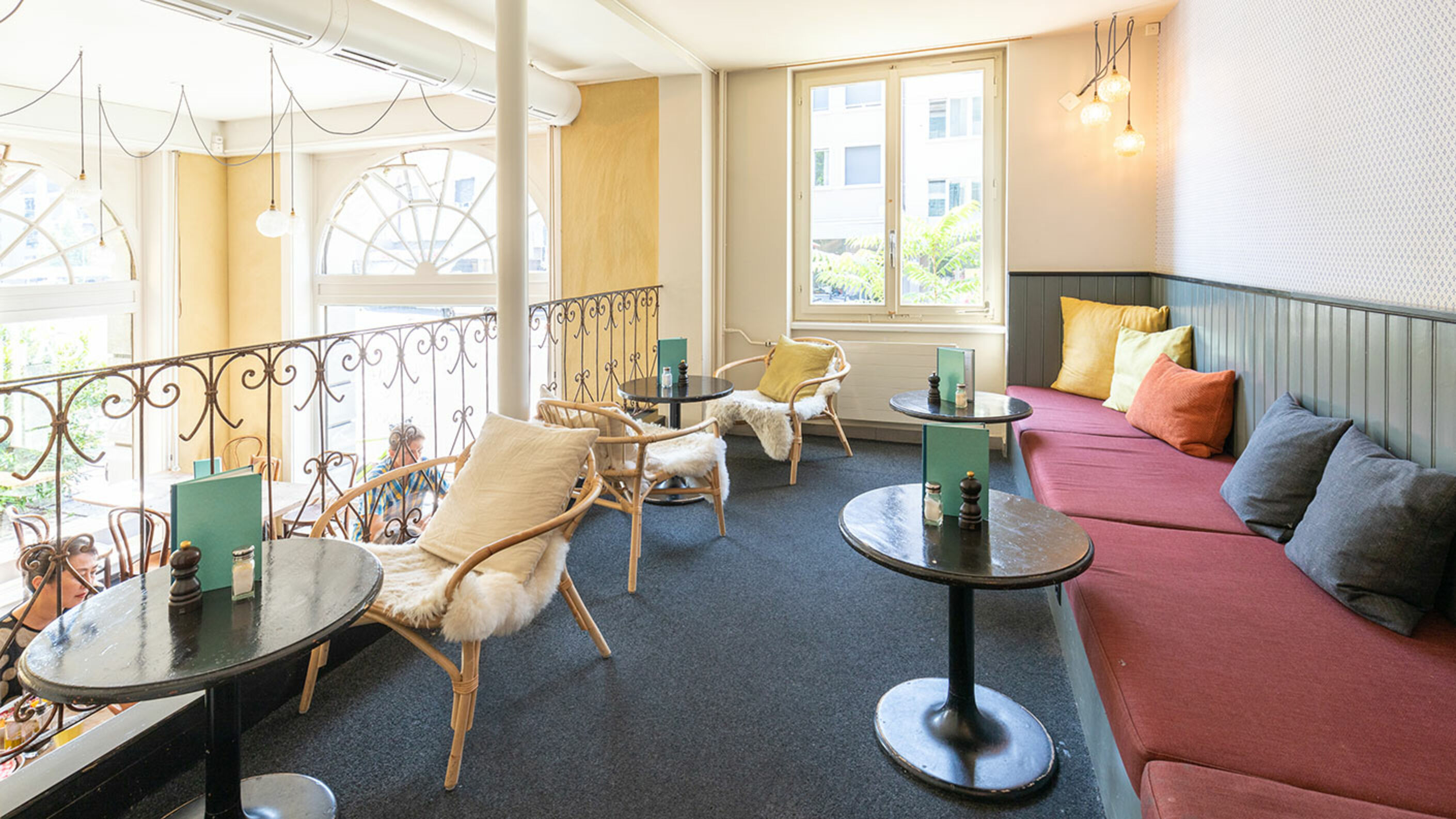 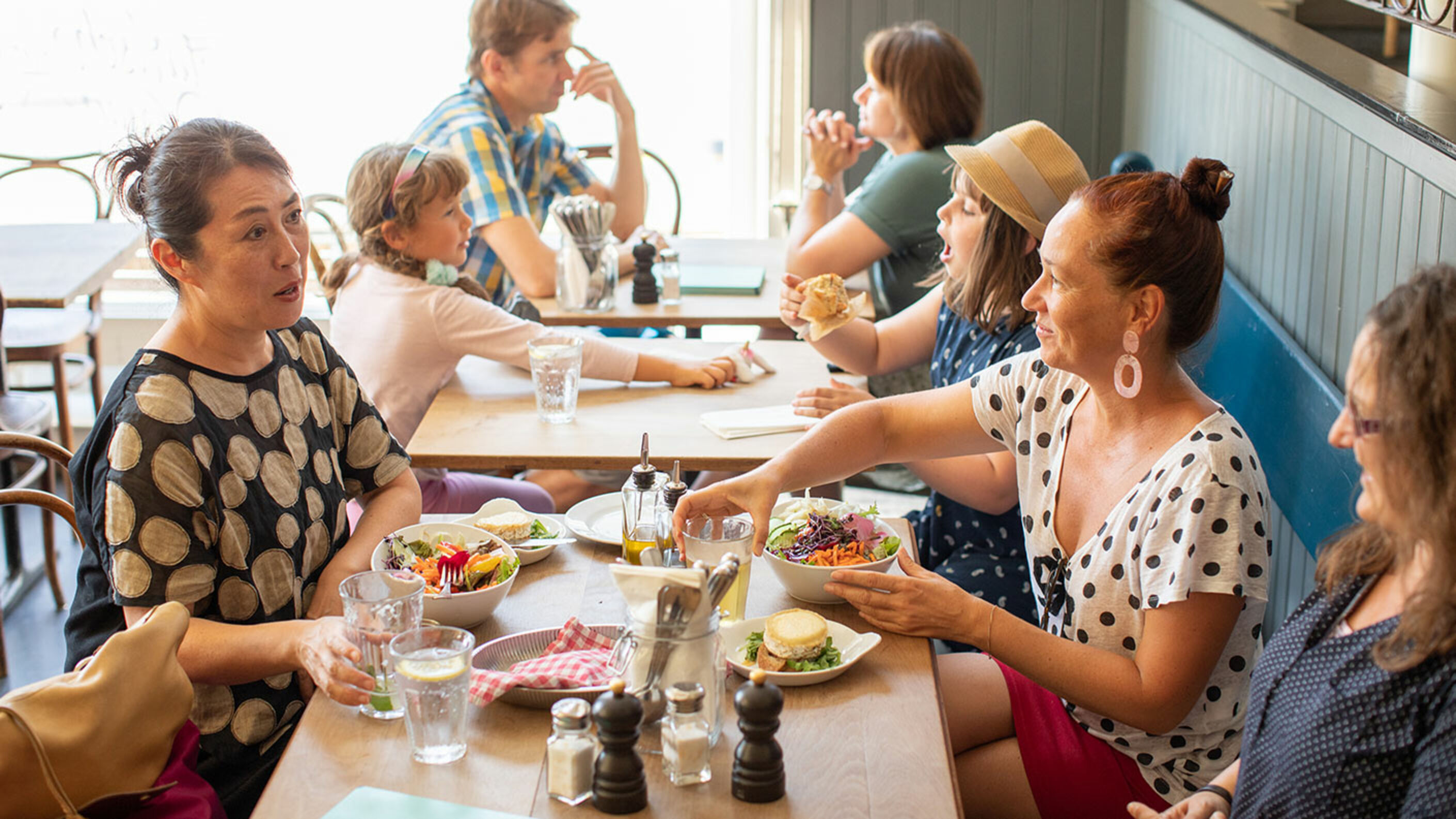 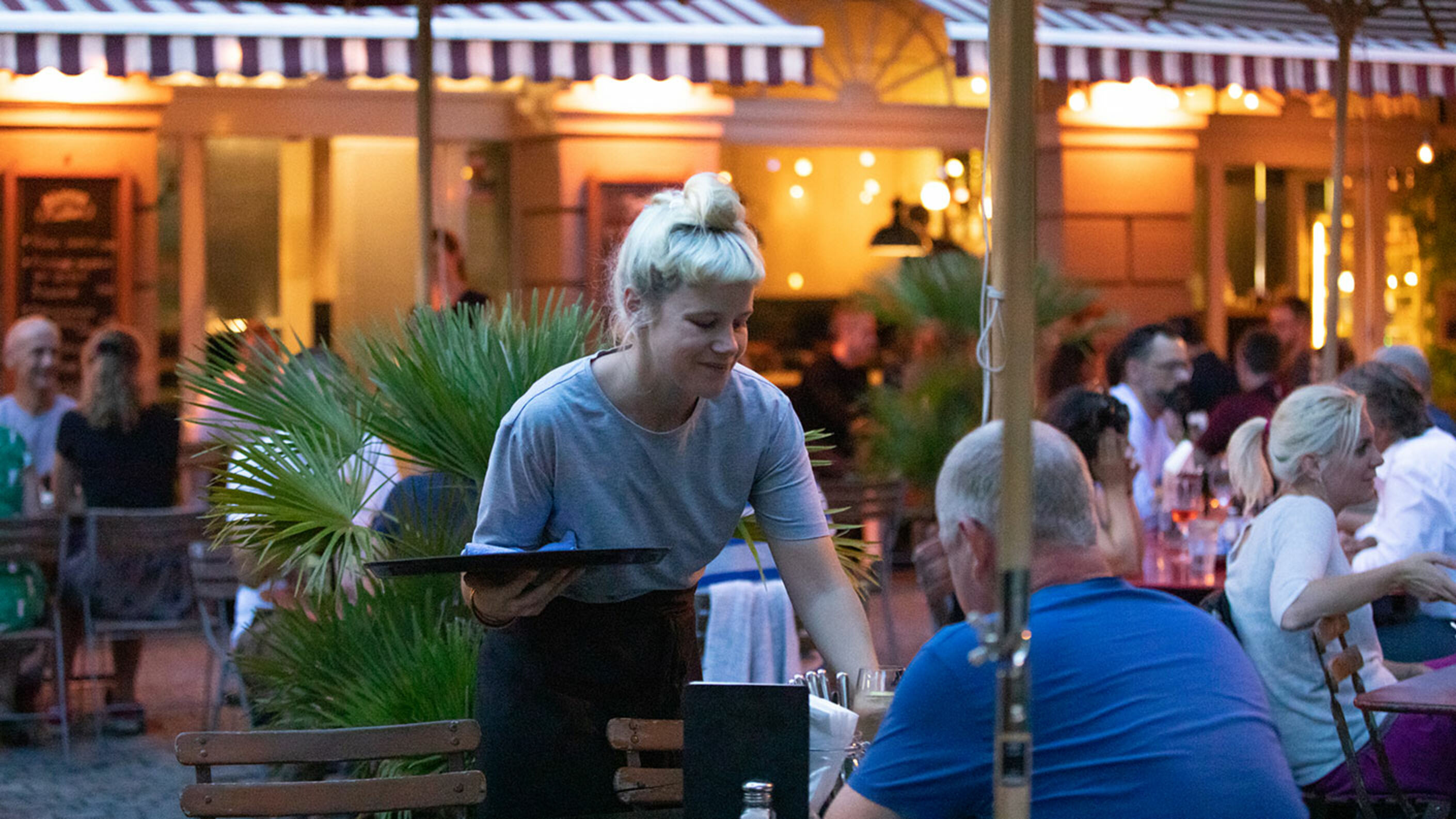 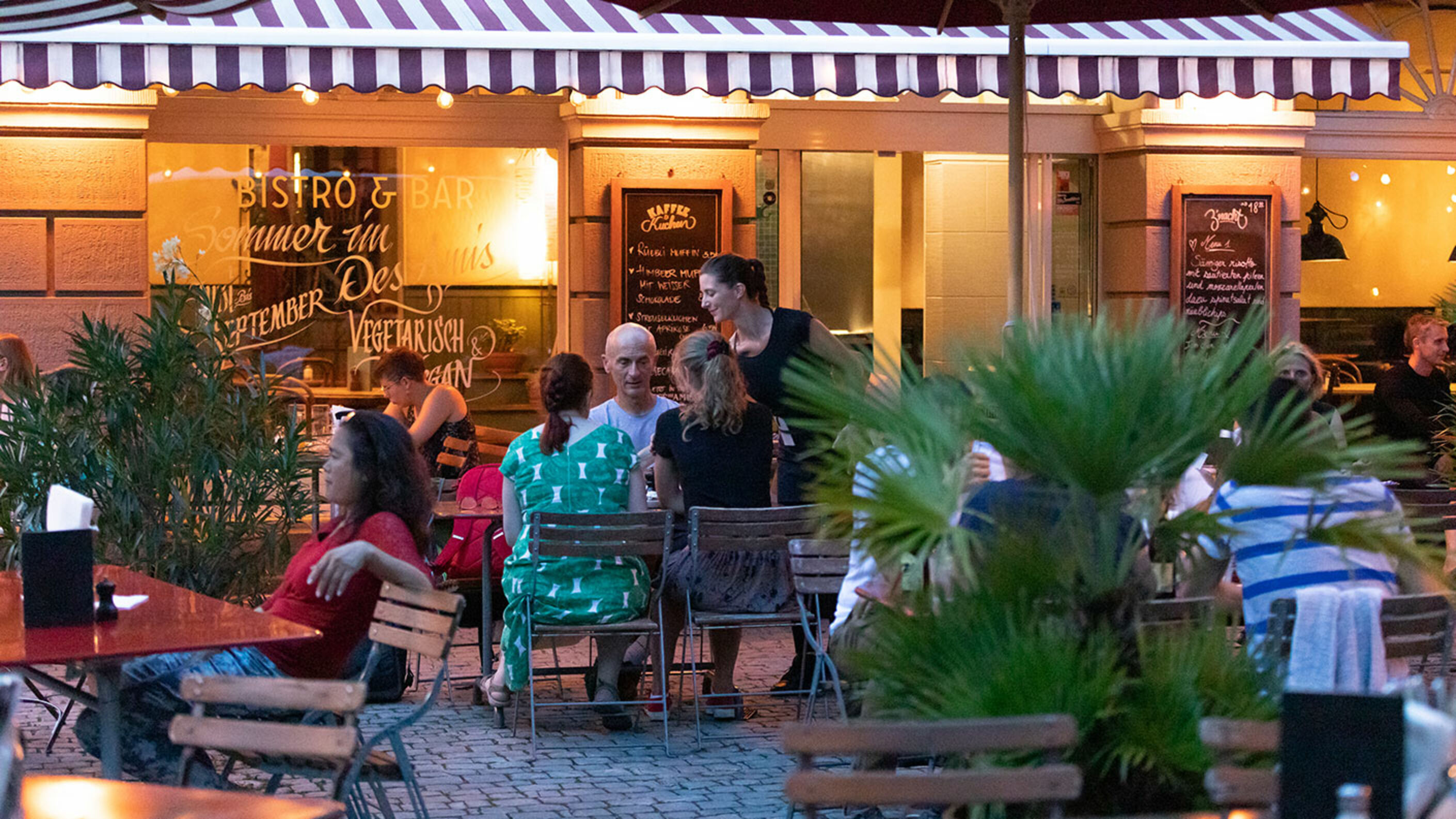 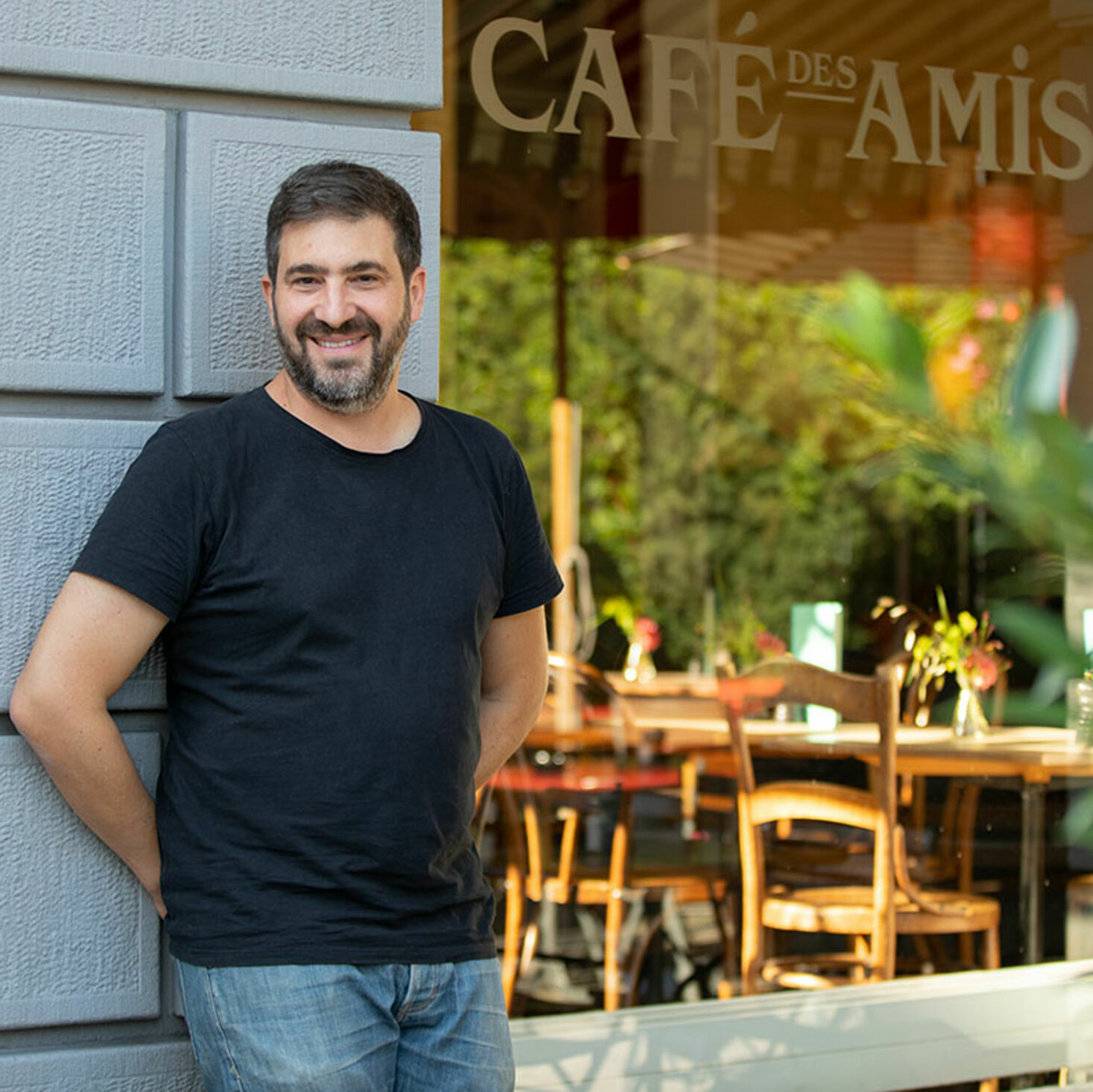 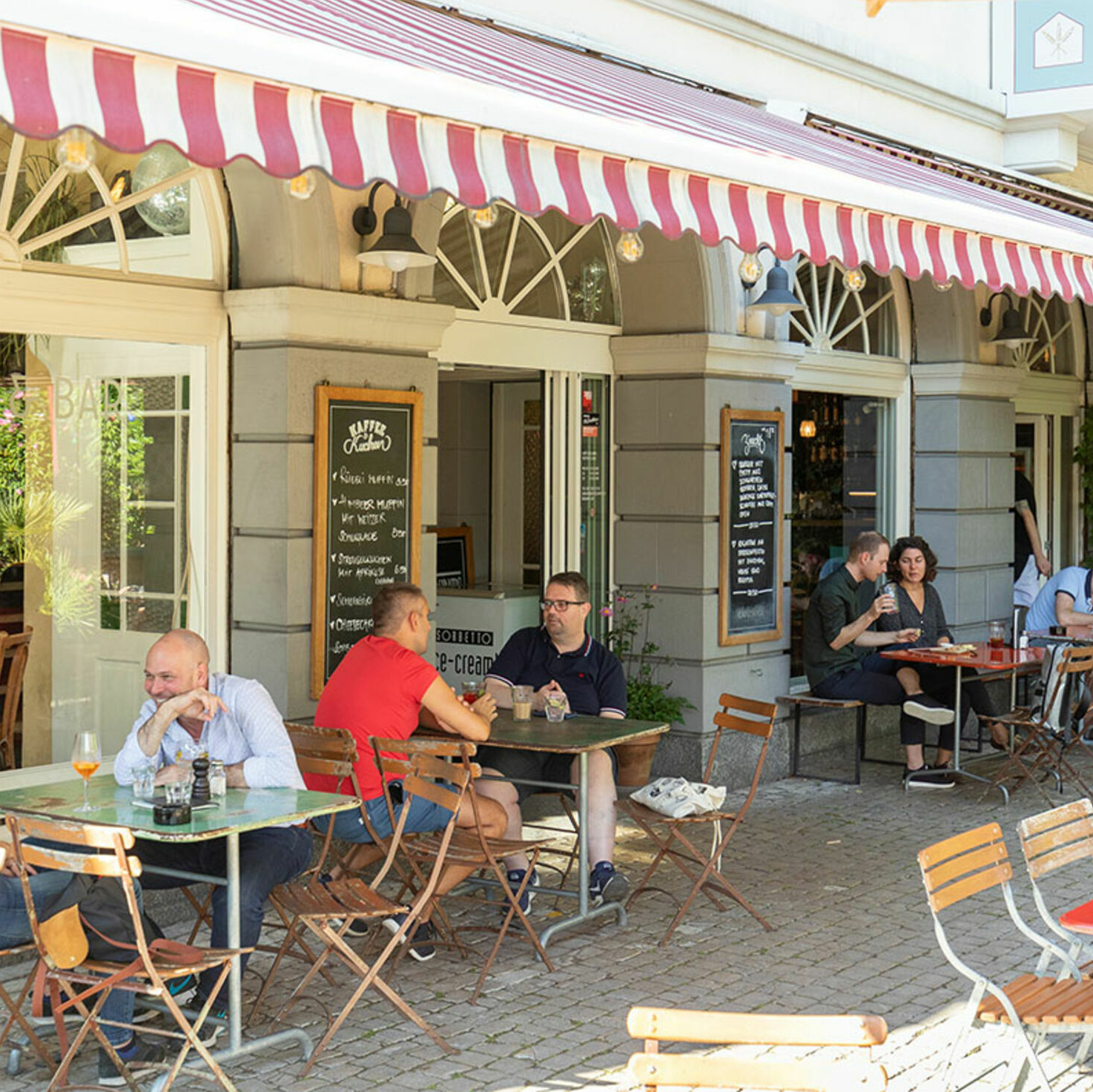 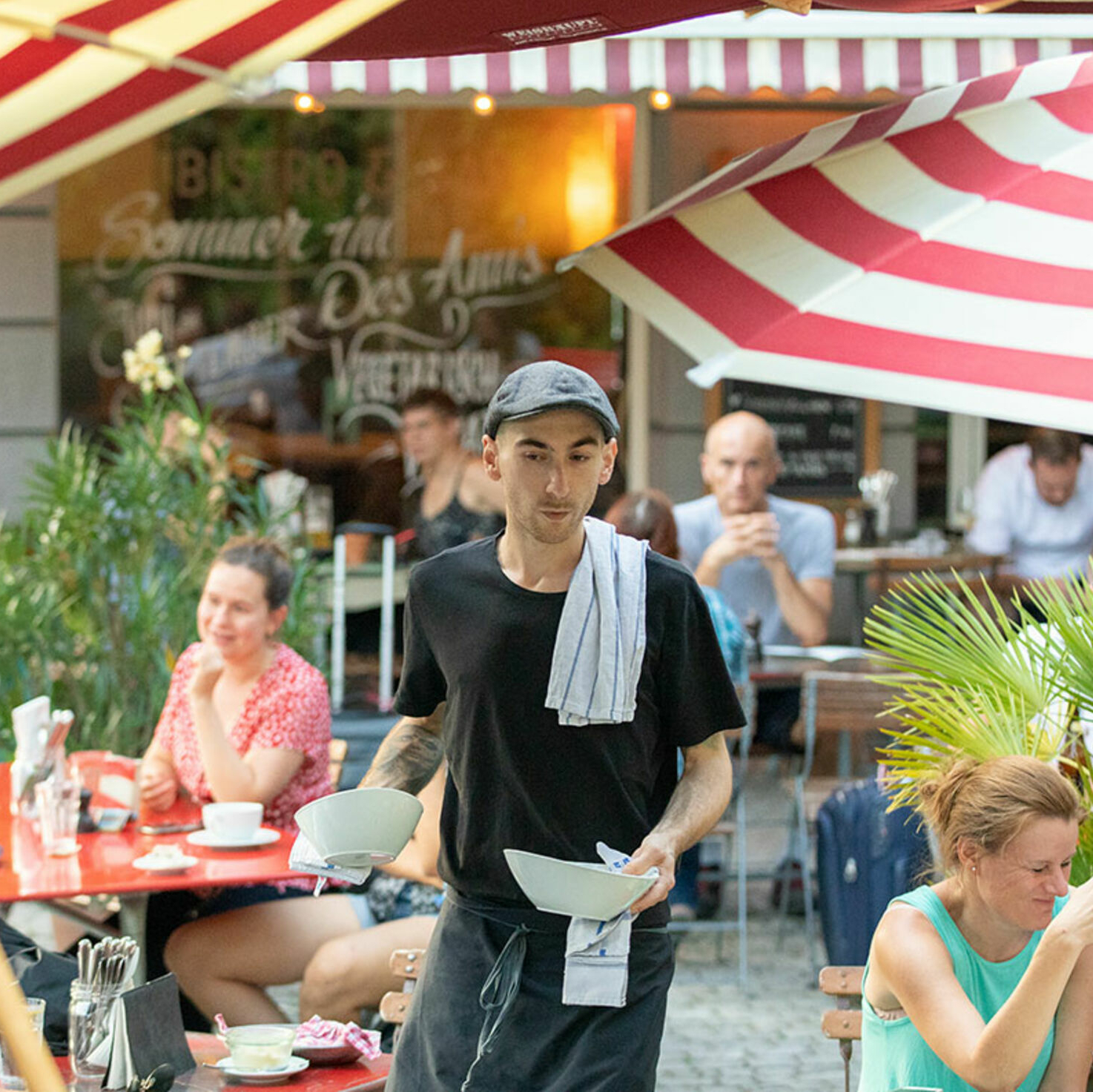 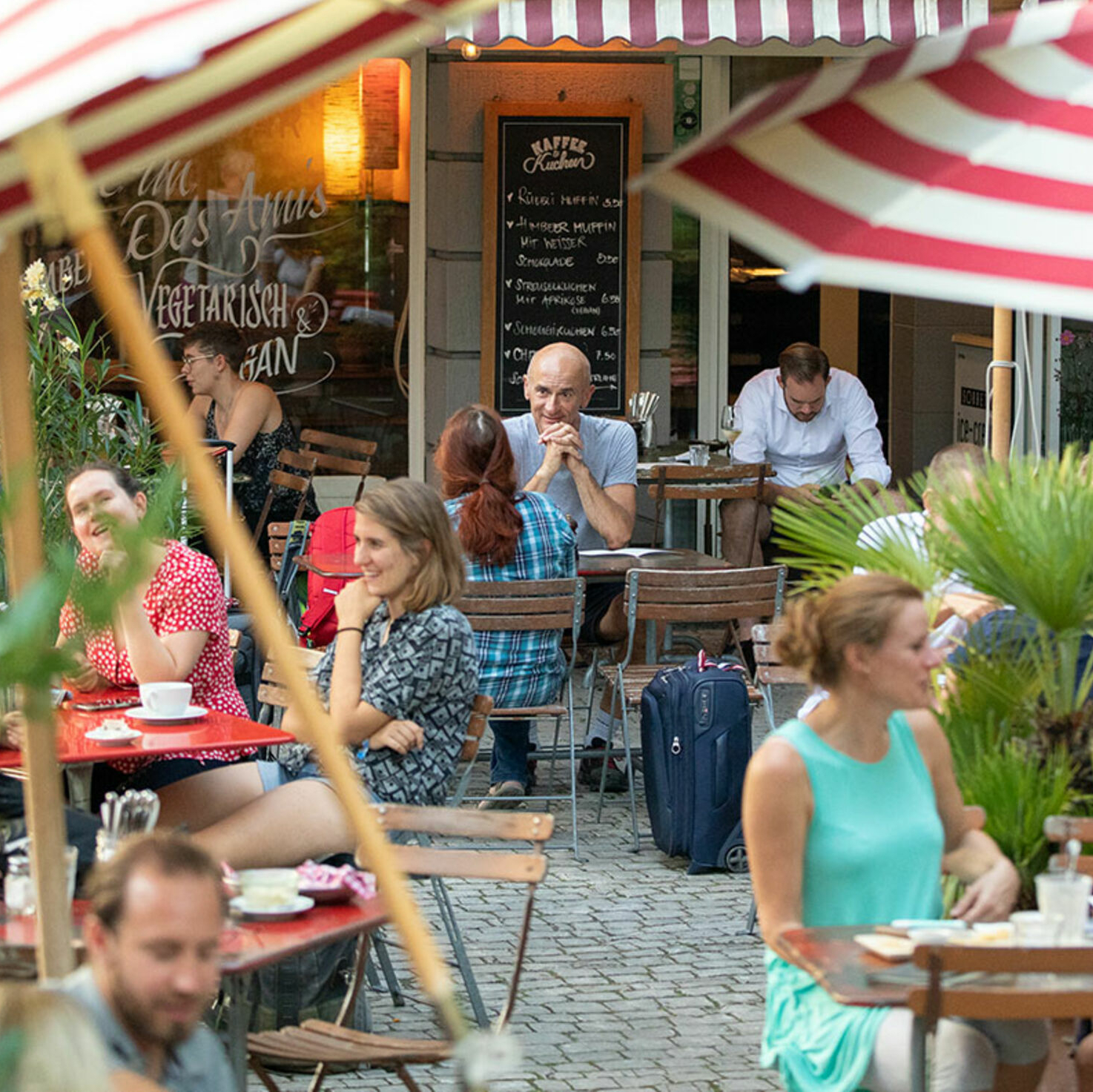 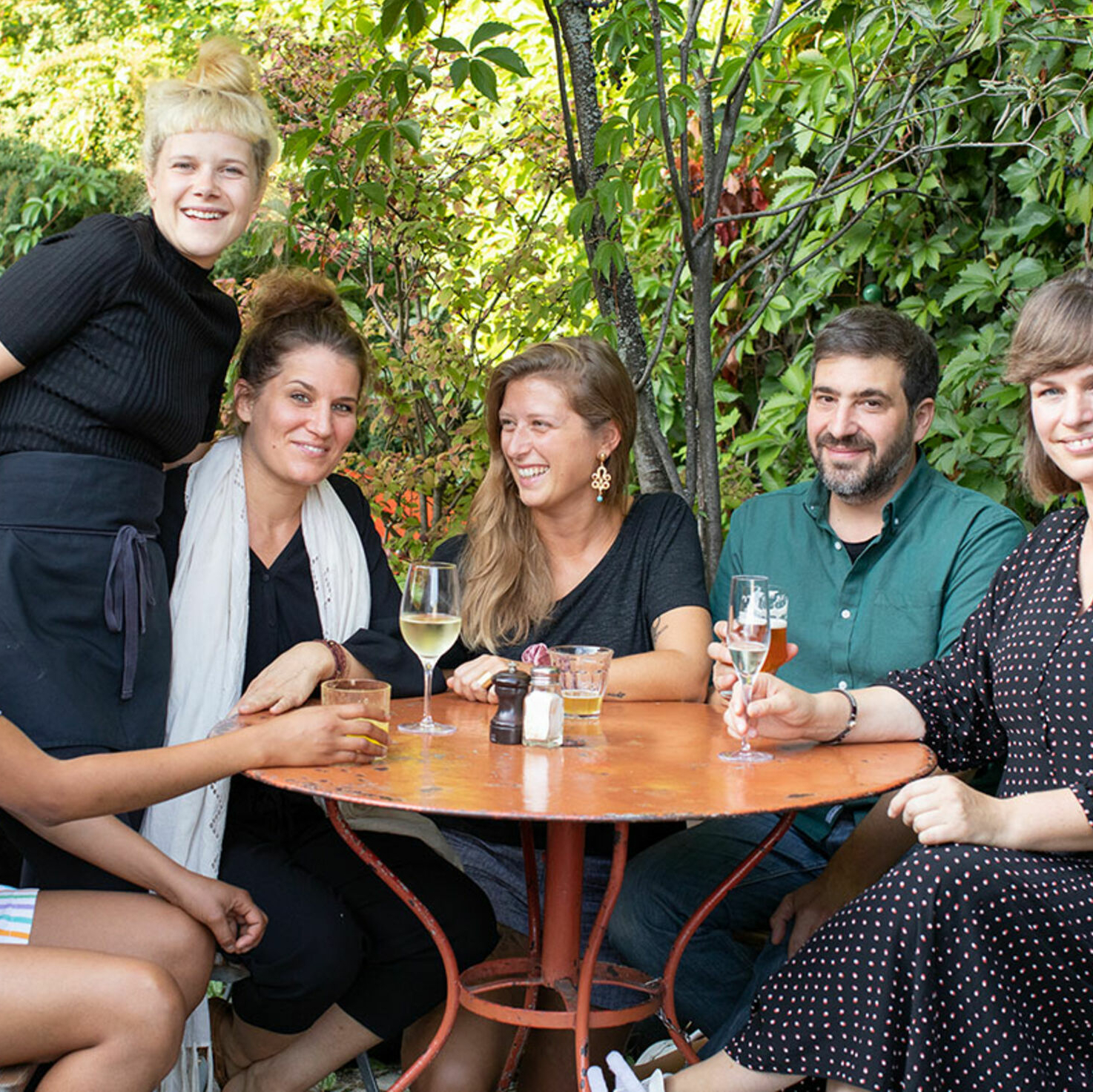 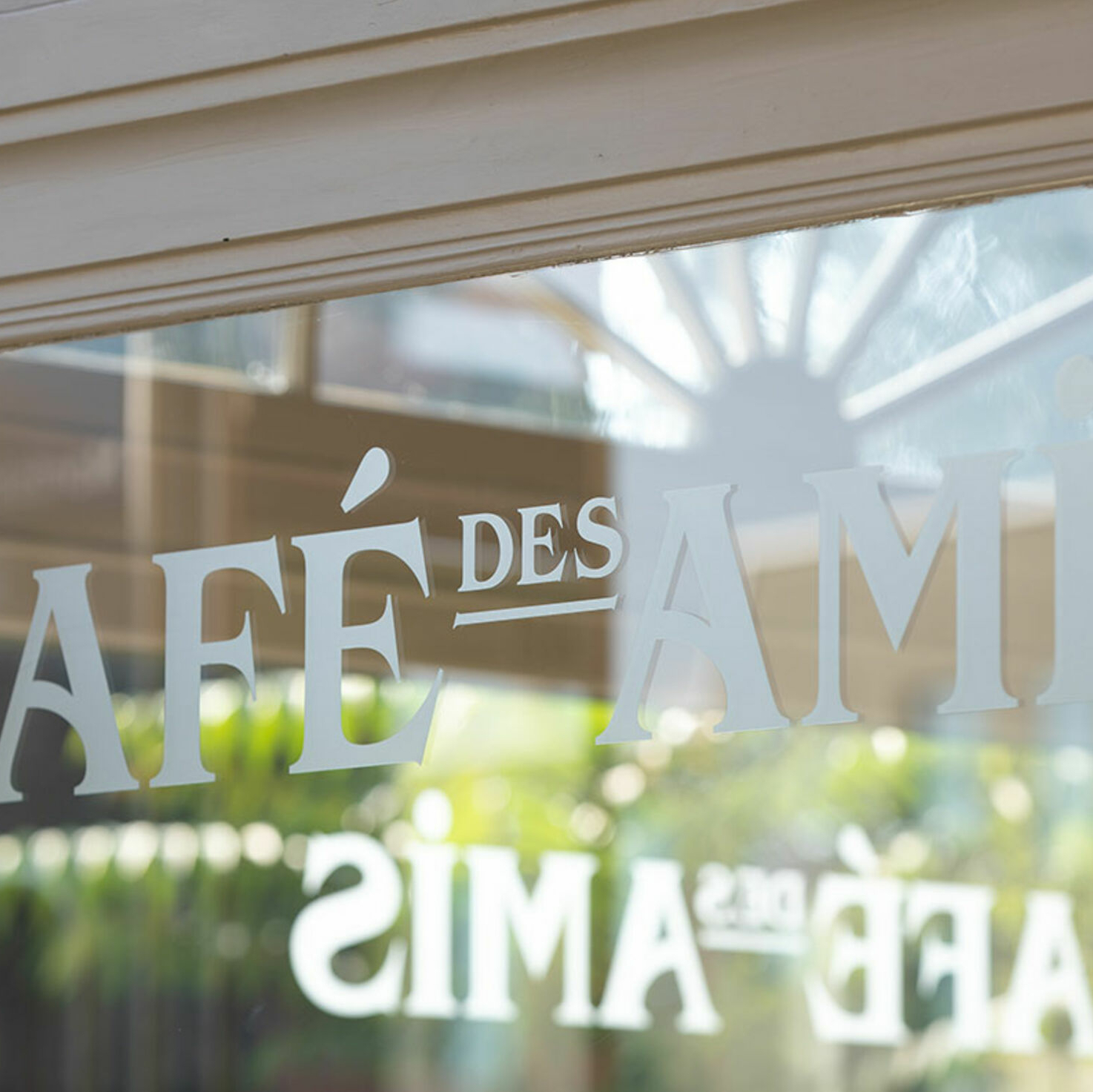 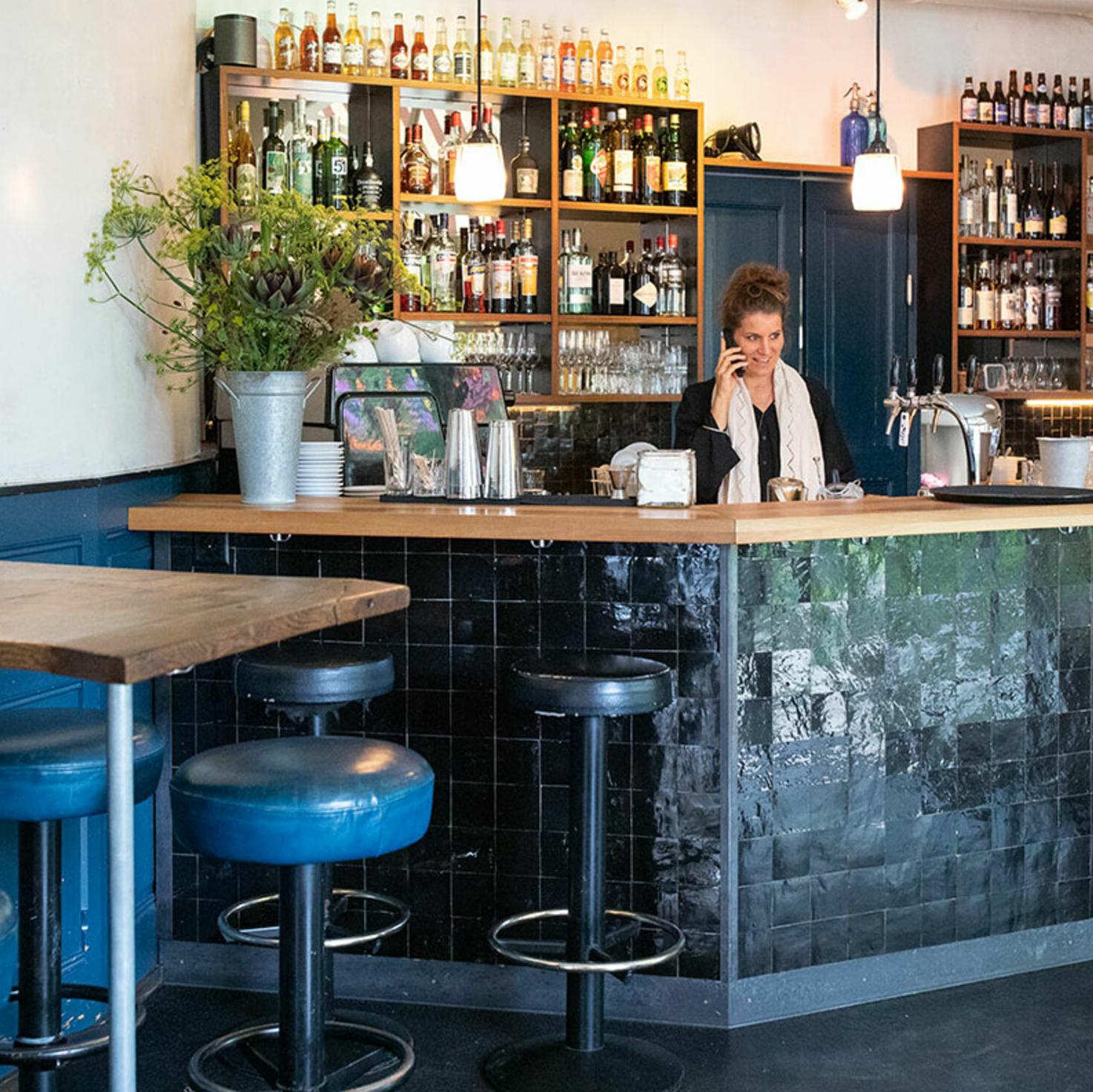 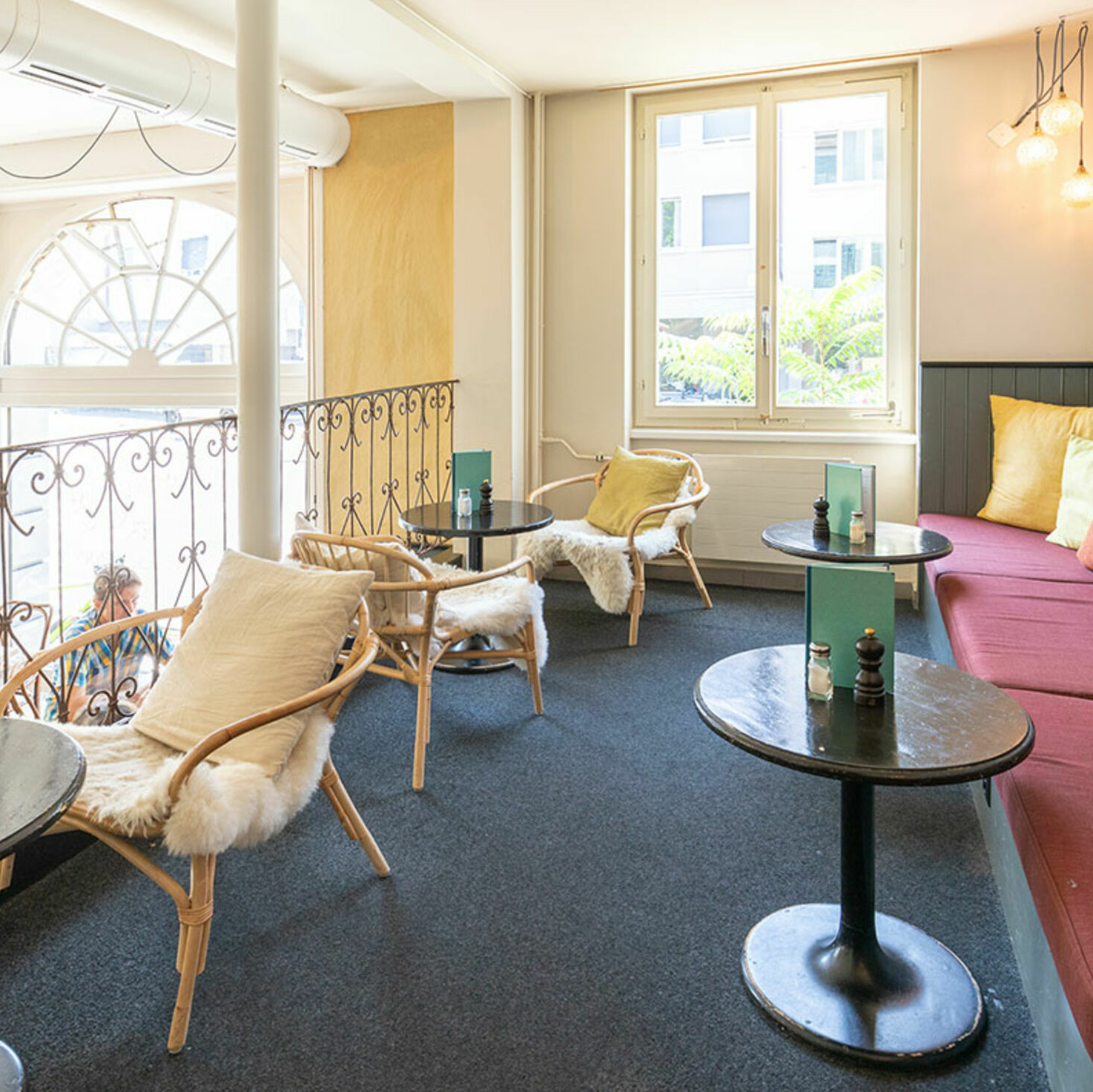 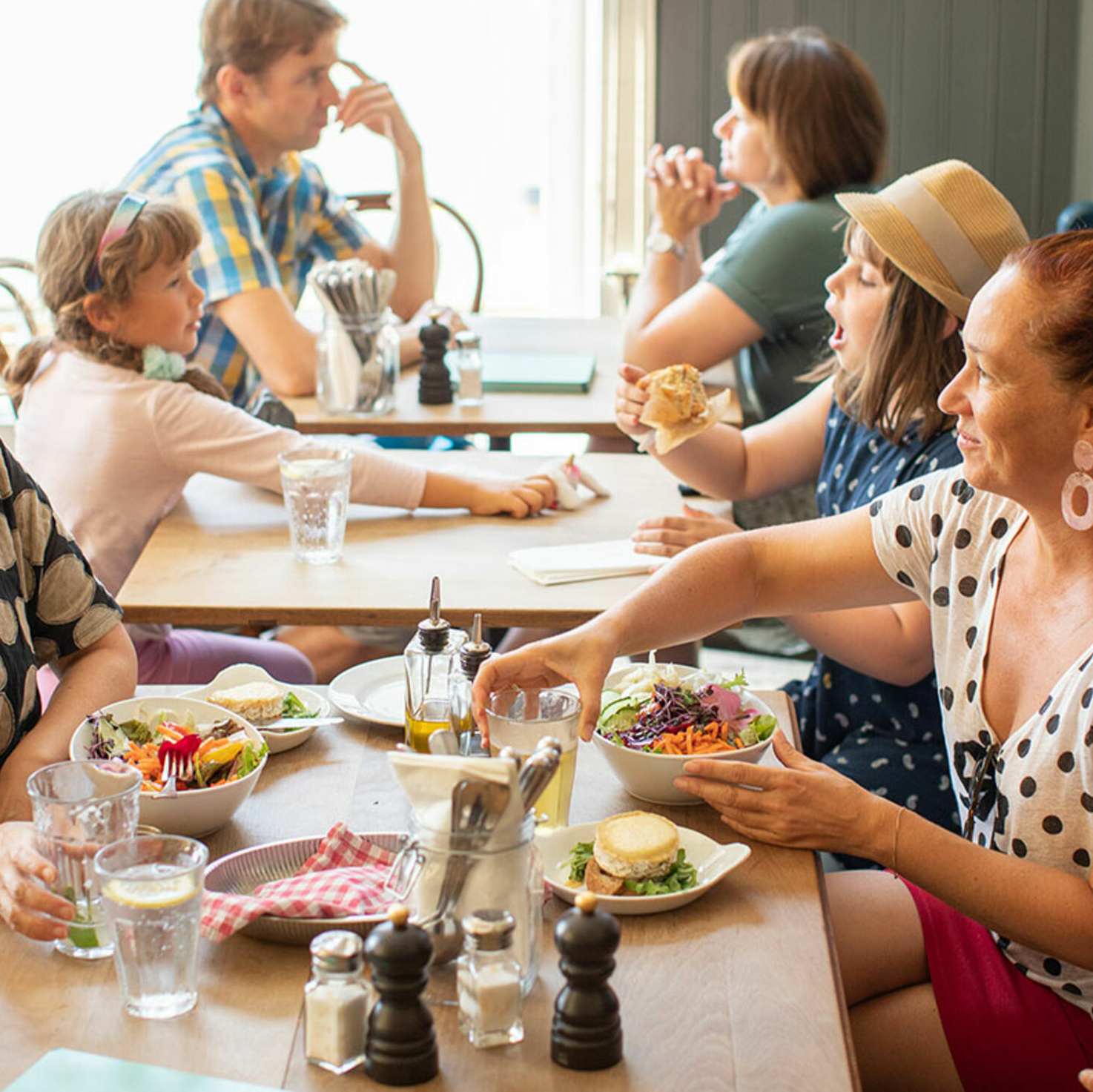 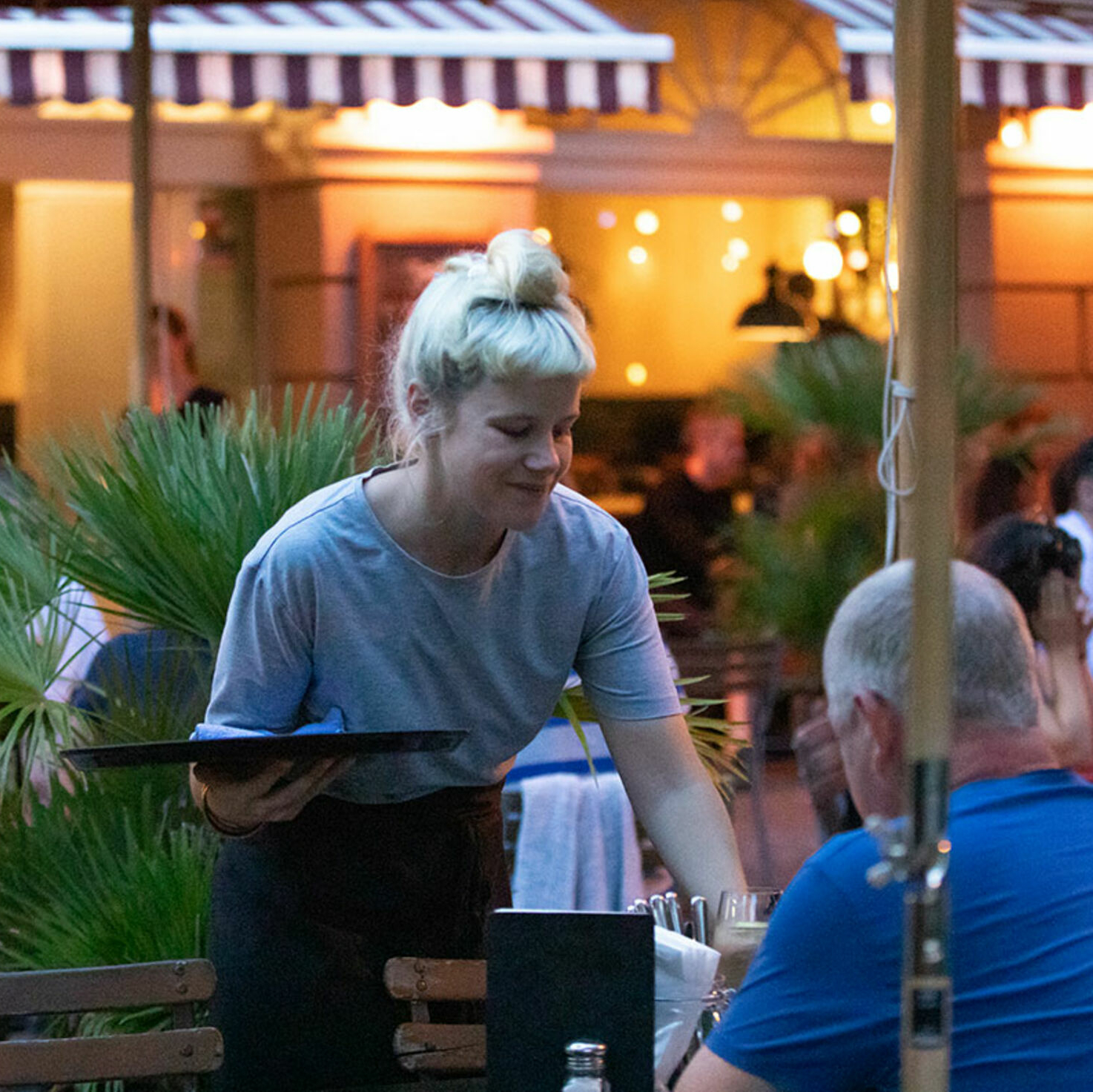 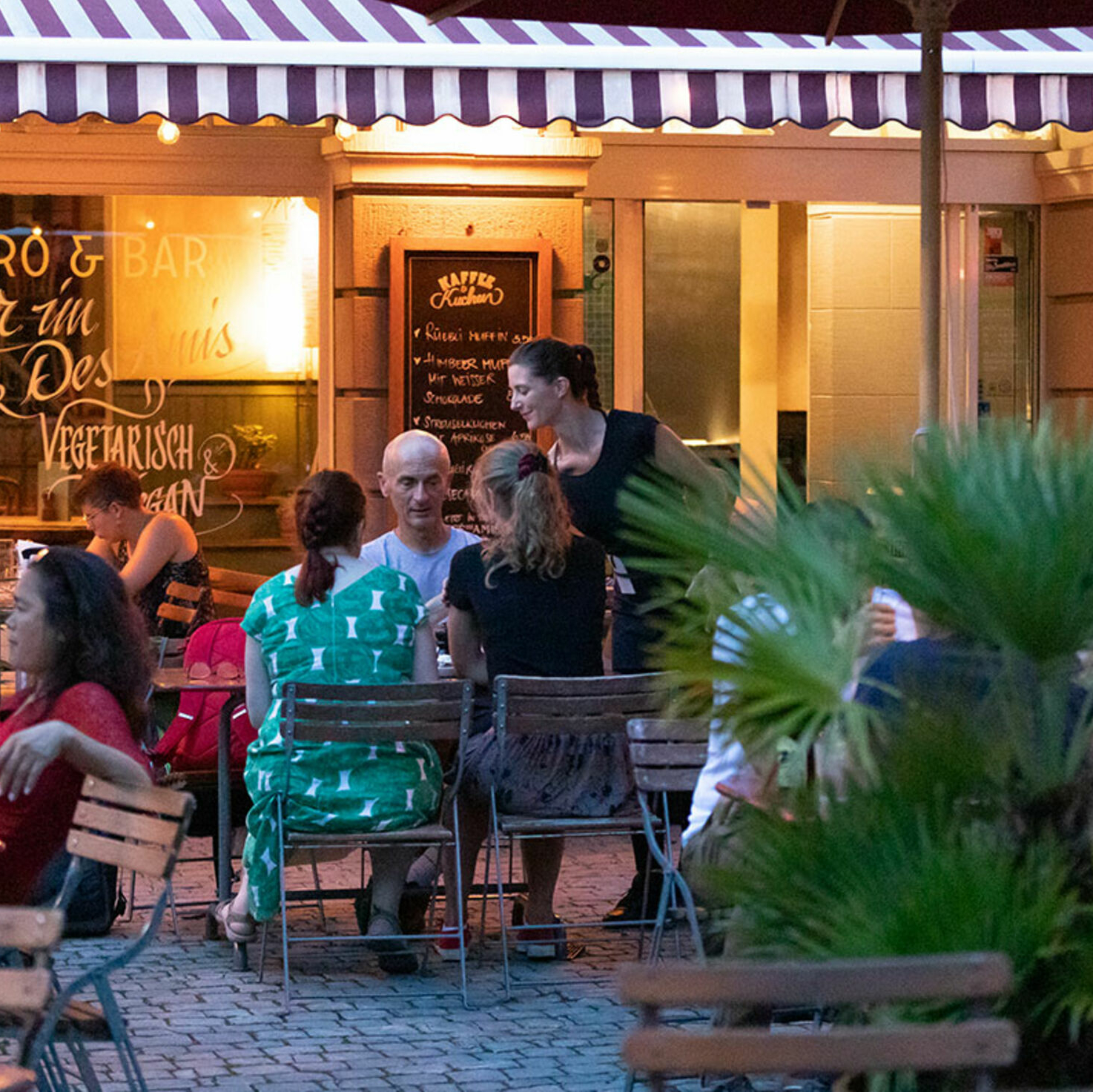 This local favourite in the district of Wipkingen has started attracting more and more tourists. This is why co-founder Miguel Castro has decided to have the menu translated into English.

Café des Amis is known across the city for its lavish brunch menu. Almost all ingredients used come from within the region. Miguel Castro and his team always avoid using products that come from large corporations. Whether it’s lunchtime or for dinner, the food should be fresh and local.

The tables in the outdoor seating area slowly start to empty. The lunch break will soon be over for most people. A sense of calm replaces the hustle and bustle. A few regular customers leisurely pore over their newspapers. Parents keep their children topped up with juice while older customers sip on coffee. The restaurant’s regulars chat to one another. There’s certainly a cosy atmosphere. ‘This time of day is one of my favourites,’ says Miguel Castro.

Miguel founded Café des Amis in 2011 together with several friends. The group had previously mainly worked on the nightlife scene. No one had any experience in the restaurant trade. ‘We were quite naive. But maybe that was a good thing,’ says Miguel, who still sometimes helps out at the nightclubs Kauz and Zukunft. It is now just Miguel and Mélanie Lang who run Café des Amis together: ‘The café had been massively important to us both right from the start,’ explains the restaurateur.

The bistros in Paris were their inspiration.

Not least because he feels very connected to the district: Miguel grew up near to where Café des Amis now stands. ‘District 10 used to be quite a deprived area,’ explains Miguel. He mentions the open drug scene around the Unterer Letten area. ‘It was no man’s land – particularly on the corner of Kronenwiese.’

These days, Wipkingen is one of the most popular areas to live in Zurich. That’s why Miguel continued to live here for a few years as an adult. One day he discovered that the building where Café des Amis now stands was empty. Miguel tracked down the owner. One year later, he and his friends moved into the premises. They came up with the concept – and the name – while the group were on holiday together. ‘We decided that we wanted the restaurant to be open all day,’ says Miguel. The bistros in Paris were their inspiration. ‘There are so many delicious and simple French dishes, like quiche,’ says Miguel. These days the menu isn’t as heavily influenced by French cuisine.

‘We want walk-in customers to be able to eat here as well.’

‘We love taking on new challenges,’ says Miguel. Café des Amis strictly avoids using palm oil and products from large international corporations. ‘That’s why we make our own chocolate spread.’ Café des Amis also sources almost all of its ingredients from within the region. ‘For example, instead of Parmesan, we use a Swiss mountain cheese with a similar flavour,’ says Miguel. Most of the ingredients are organic. ‘But we don’t advertise this fact on the menu.’ It is just part of the restaurant’s ethos. Café des Amis also doesn’t serve soft drinks from major manufacturers. ‘We have discovered some excellent Swiss lemonades,’ says Miguel.

Miguel knew from the very beginning that the restaurant would be a success.

But the restaurant is often busy at other times of the day too. A few tables are available to reserve for brunch and lunch, but not in the evening. ‘We want walk-in customers and locals to be able to eat here as well,’ explains Miguel.

He and his team have filled a gap in Wipkingen with Café des Amis. They practically worked non-stop the first few months after opening. ‘On some occasions, people were queuing up across the restaurant floor to get a table.’ Miguel knew from the very beginning that the restaurant would be a success. ‘Otherwise we wouldn’t have opened it,’ he says with a laugh.