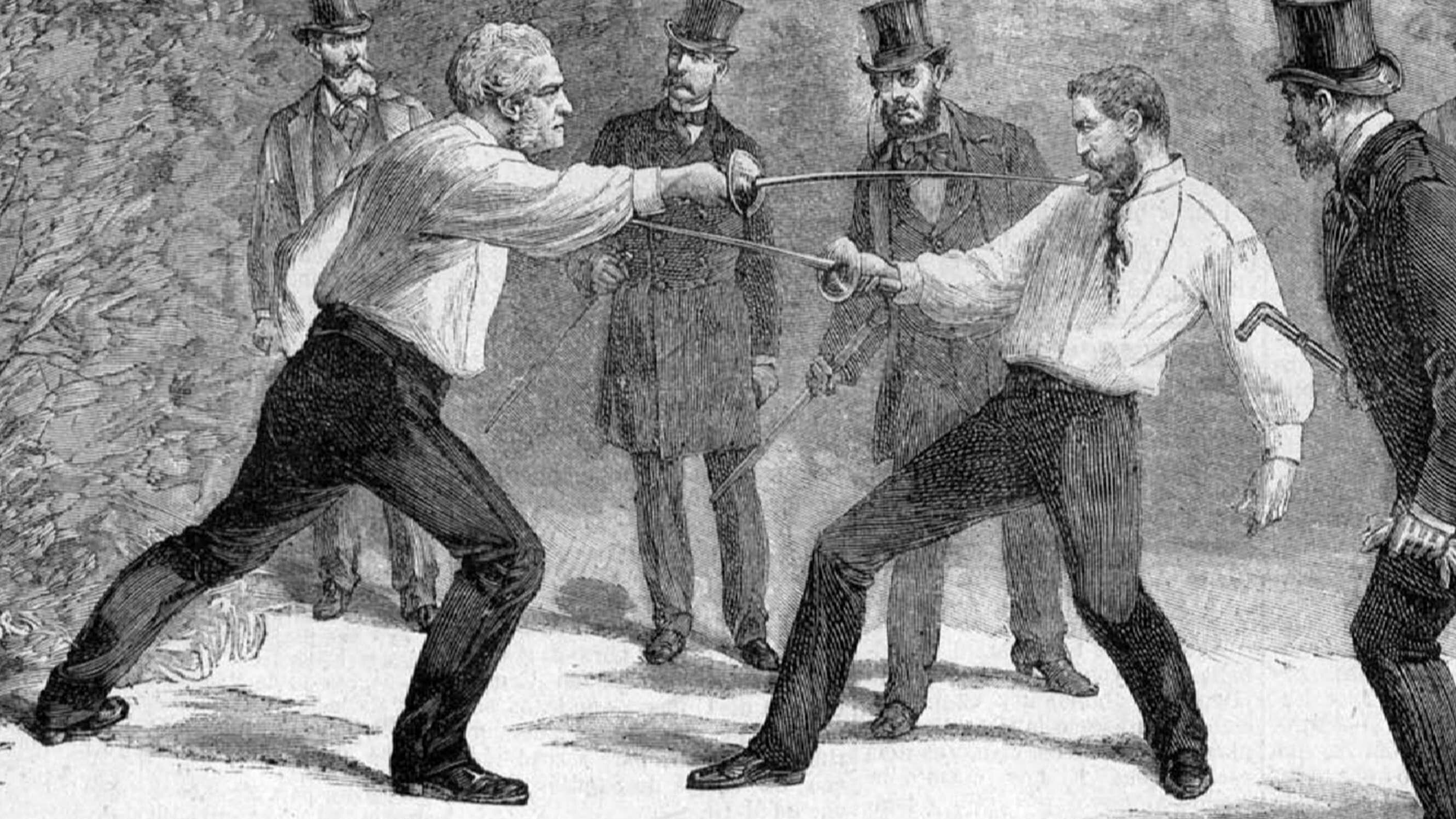 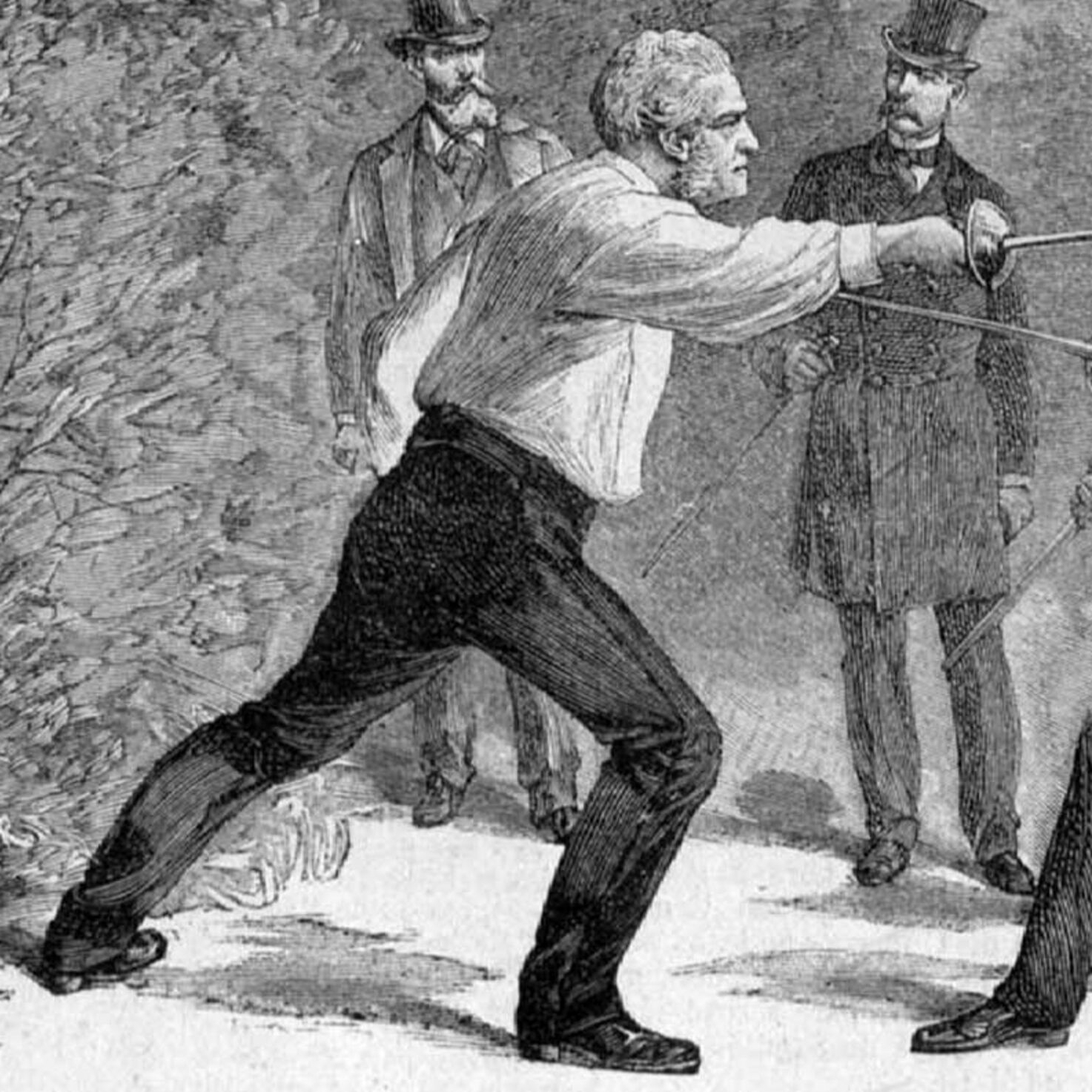 Duel in the National Council

In some parliaments things get rough now and then; they even turn violent from time to time. Not in Switzerland. In this country, mutual respect and a spirit of compromise are usually the order of the day. That hasn’t always been the case, though, as an example from 1848 shows.

In the Swiss Parliament, things are usually civilised and orderly. People listen to one another, discuss politely, and take a vote. Then winners and losers go and have lunch together. Angry tirades and threatening gestures are rare in Switzerland’s federal politics. Violent confrontations in the parliamentary chamber just do not happen. It’s always been that way… Wait, there was something. In autumn 1848, at the National Council’s very first session, a fierce altercation erupted between two men – an altercation that ended in an actual duel and one slightly injured National Councillor. But first things first.

In November 1848 Ticino National Councillor Giacomo Luvini accused federal military forces of having violated the sovereignty of the Canton of Ticino on several occasions. Rudolf Benz, member of the National Council for Zurich and the commander of the soldiers in question, took issue with the accusation and rounded on Luvini. He called the Ticino colonel a coward, because in the Sonderbund War of 1847 he had been defeated by the men of Uri at Airolo and had turned tail. Giacomo Luvini wasn’t going to stand for that. He challenged the Zurich National Councillor to a duel.

This article originally appeared in the Landesmuseum blog. It regularly covers fascinating stories from the past. For example ‘Der lange Weg zum Frauenstimmrecht’.

On 29 November, the two adversaries crossed blades. According to the Eidgenössische Zeitung newspaper, the swordfight took place on the parade ground of the cavalry barracks. ‘It was agreed that the combatants would fight until the first blood was drawn’, the newspaper said in its report of 3 December 1848. Rudolf Benz injured his hand in the encounter, but was still able to go home in a carriage the same day.

The fact that this duel even took place is partly down to the Bern police. Duels have been banned in Bern since 1651. However, officials turned a blind eye and observed the event from afar, as the Eidgenössische Zeitung noted: ‘Our esteemed police commissioner is said to have got wind of the business, but did not dare do anything to prevent it; he therefore contented himself with circling the scene of the battle from a distance and watching over it with his eagle eye.’

Rudolf Benz in a print dating from 1858. (Photo: Schweizerisches Nationalmuseum)

Duelling was common in the 19th century and – to overstate it somewhat – was the manly approach to restoring wounded honour. In military and aristocratic circles, men were quick to take up their weapons to obtain ‘satisfaction’. But even at universities, pistols and sabres were part of everyday life. It wasn’t until 1937, in the first Swiss criminal code (Strafgesetzbuch), that this type of single combat was prohibited nationwide.

Although they continued to sit together on the National Council for many years, Giacomo Luvini and Rudolf Benz were never close friends. Interestingly, the latter was the author of the criminal code for the Canton of Zurich, published in 1871. In this set of rules, the dueller of 1848 made duelling a criminal offence: ‘Single combat (duelling) shall be punished, even if no bodily injury is sustained or if any injuries are only minor in nature, by imprisonment for up to two months, together with a fine, for both the challenger and the opponent.’ The only question now is which hand Benz used to write this article of law…