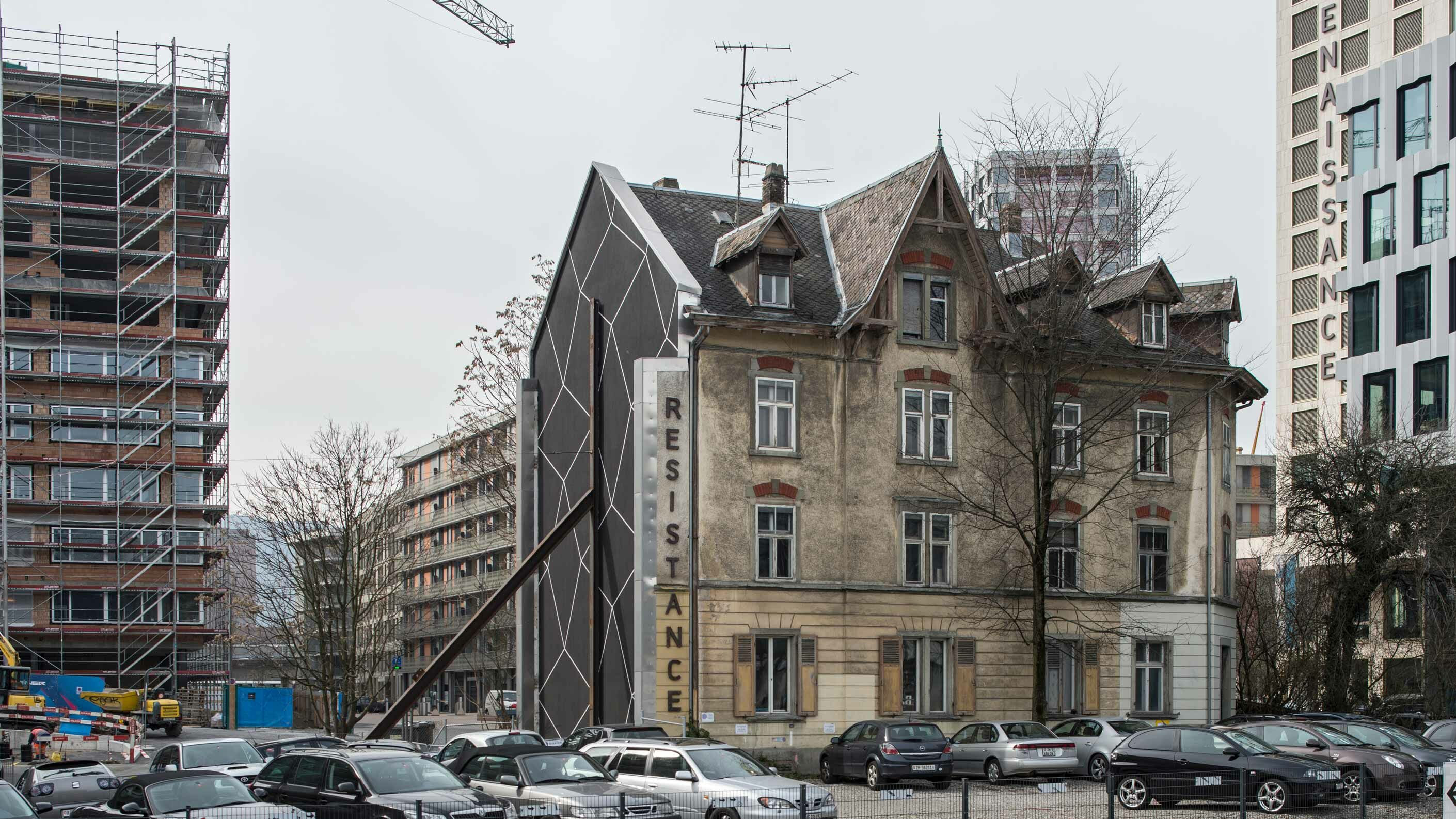 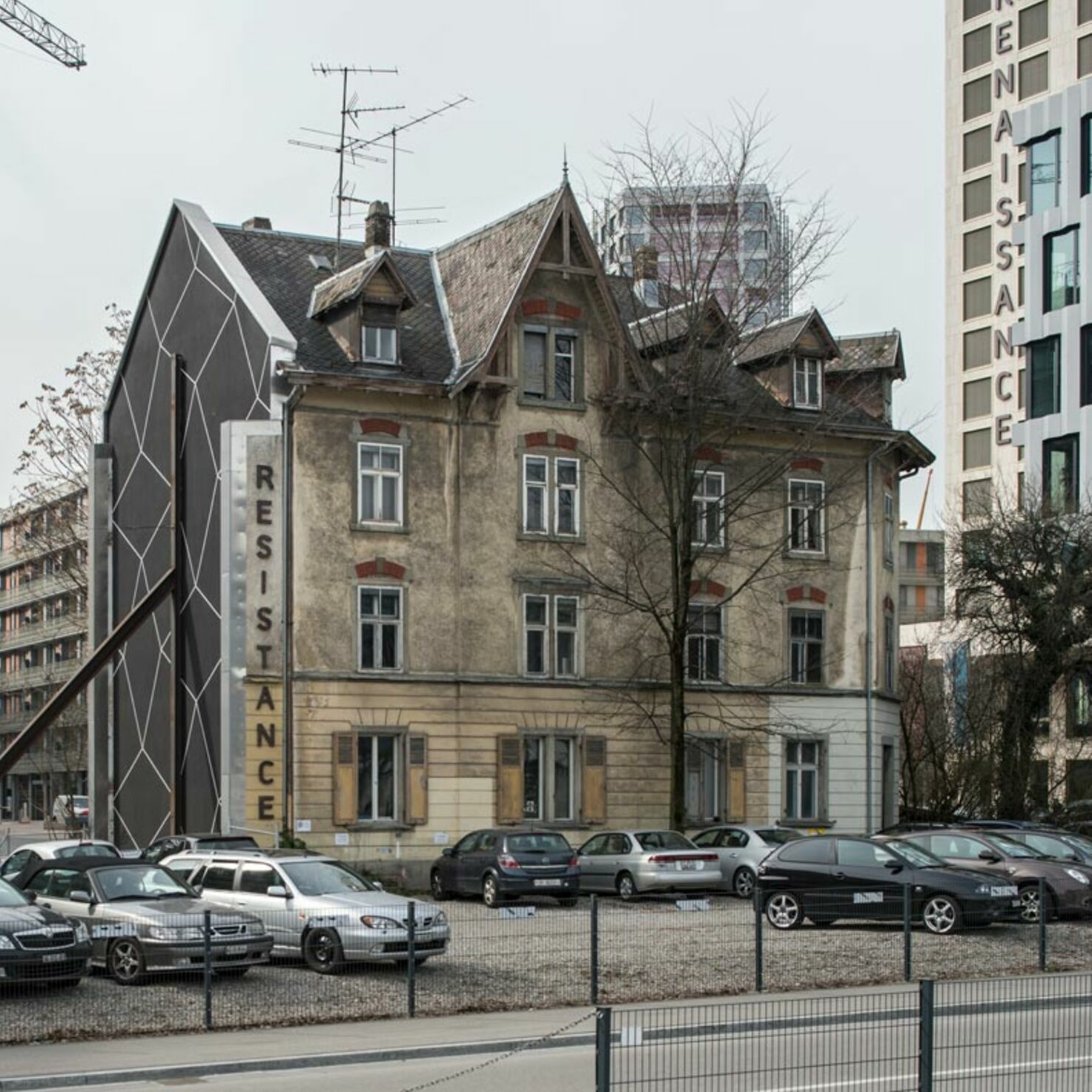 The plan at Escher-Wyss-Platz was for a multifunctional art installation that would pick up the themes of change and resistance with gentle irony. A few years later, however, Zurich acquired a genuine ‘nail house’ within walking distance.

From 2007 to 2009, an art installation made headlines in the Swiss press. At that time, the city wanted to reinvigorate Escher-Wyss-Platz with better design. The ‘Nagelhaus’ (‘nail house’) project was intended as an art installation that initially used change in this formerly industrial area as its theme. Its creators’ intention was that it should look like a relic from a bygone age, as though it had been there first and the Hardbrücke bridge had subsequently grown over it.

The ‘Nagelhaus’ project was planned by the architects responsible in collaboration with the artist Thomas Demand. A ‘nail house’ is a building that is initially left standing like a nail on a board because its owners resist its demolition. The part with the bistro in the architectural visualisations resembled a real ‘nail house’ from the Chinese metropolis of Chongqing, which had been made famous worldwide by a press photo.

The fact that this gently ironic art installation would also have included a small restaurant, a public toilet and a kiosk did nothing to help the project. It failed simply on grounds of cost. ‘Six million for a little house’ was the mocking headline used by the ‘Blick’ newspaper in the free evening edition of its print version. The expensive ‘Chinese’ house was also opposed by the Swiss People’s Party (SVP). Zurich’s voters rejected the ‘Nagelhaus’ at the ballot box in 2010. A cheaper work of art, without a toilet, kiosk and restaurant, was put up at Escher-Wyss-Platz instead.

Just a few years later, Zurich acquired a genuine nail house – and only a few steps away from Escher-Wyss-Platz.

Just a few years later, Zurich acquired a genuine nail house – and only a few steps away from Escher-Wyss-Platz. The property at Turbinenstrasse 12/14 was built by the Escher Wyss company. The machine company had established itself there in 1890, when the area was still open countryside on the edge of the city. From then on, the district developed into an industrial area over the subsequent years. Not far away from the company’s site, the building was once part of a whole estate housing the factory’s workers and consisting then of nine apartment blocks.

Decades later, the area had changed drastically. The machine, soap and gear factories, to name just a few of the main facilities, had ceased operating long ago. The former industrial area had become a services quarter with hotels, offices, cultural facilities and restaurants.

In the meantime, high-rises such as the Mobimo Tower or, a little further away, the Prime Tower had risen up in the neighbourhood.

As the owners were stubbornly refusing to sell, the canton saw only one solution left: compulsory expropriation.

Out of all the workers’ homes, only one single building remained. In the meantime, high-rises such as the Mobimo Tower or, a little further away, the Prime Tower had risen up in the neighbourhood. Hundreds of new apartments had been built – and now the up-and-coming new quarter located between railway tracks and Pfingstweidstrasse also needed a suitable access road. There was just one thing standing in the way of the canton’s plans: that old workers’ building. The remaining property at Turbinenstrasse 12/14 with its L-shaped layout now presented itself, with its green garden, as a rather unspoilt counterpoint to the strictly modern new structures with their styled but, at the same time, monotonous façades.

In 2012, when media reports had brought its demolition to public attention, the block belonged to two groups of heirs. Some individual co-owners actually lived in the building. As the owners were stubbornly refusing to sell, the canton saw only one solution left: compulsory expropriation. The owners said an access road could also have been built to bypass the building. The canton took the view that because the residential buildings had been put up at the end of the 19th century, they had been a ‘foreign object’ in a quarter that was dominated by industry and that the buildings were, therefore, not worthy of protection.

The canton initially lost three court cases, whereupon it escalated the matter to the Federal Supreme Court. The canton’s view was that the public interest in having a road of an appropriate width outweighed the ‘private interests in undiminished execution of ownership rights’, according to the legal language used at the time. In other words, it the owners of the buildings could be expropriated and those buildings demolished.

On 5 August 2016, the diggers arrived and started the demolition.

Critics said that it was not about the road. Their view was that the old buildings were simply no longer welcome in a quarter that had become increasingly smart and luxurious, with a high-end hotel and expensive, owner-occupied apartments. As the Social Democratic Party (SP) politician Jacqueline Badran said on Swiss Radio and Television (SRF), human beings were now having to make way so that ‘the real-estate and financial-capital sector could have an environment befitting its status built for it with a large amount of taxpayers’ money’.

‘Here the workers, there the capitalists’ – this is the idea that was probably being alluded to in a subtle typographical message from the residents of the ‘nail house’. ‘Résistance’, they wrote on the façade in capital letters running from top to bottom – which looked extremely similar to the writing on the nearby ‘Renaissance’ hotel. However, the Federal Supreme Court ruling of autumn 2014 rendered all resistance futile. The 20 or so residents had to vacate the building by the end of June 2016. With that, a legal dispute that had continued for 15 years was now definitively at an end. On 5 August 2016, the diggers arrived and started the demolition.