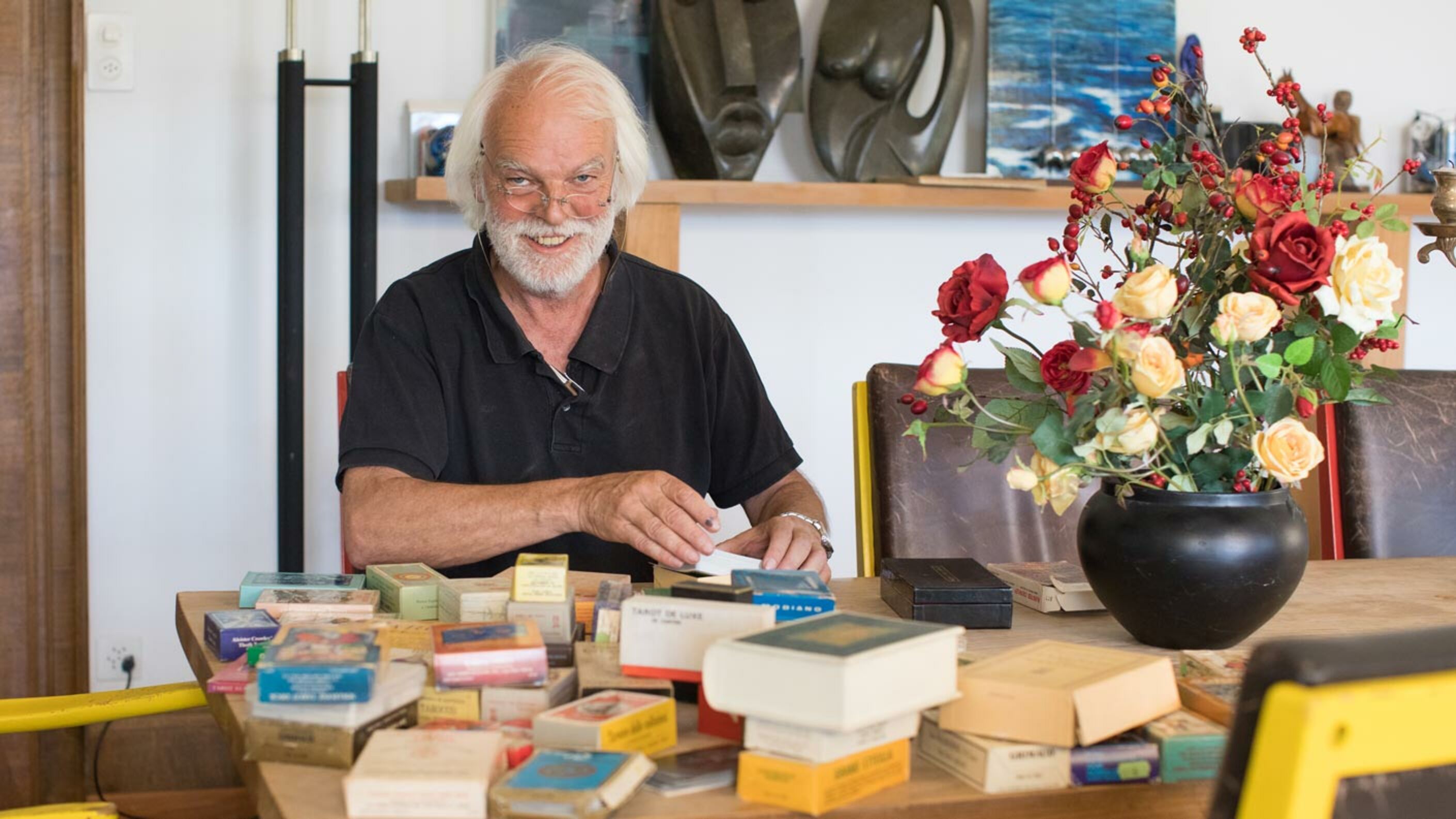 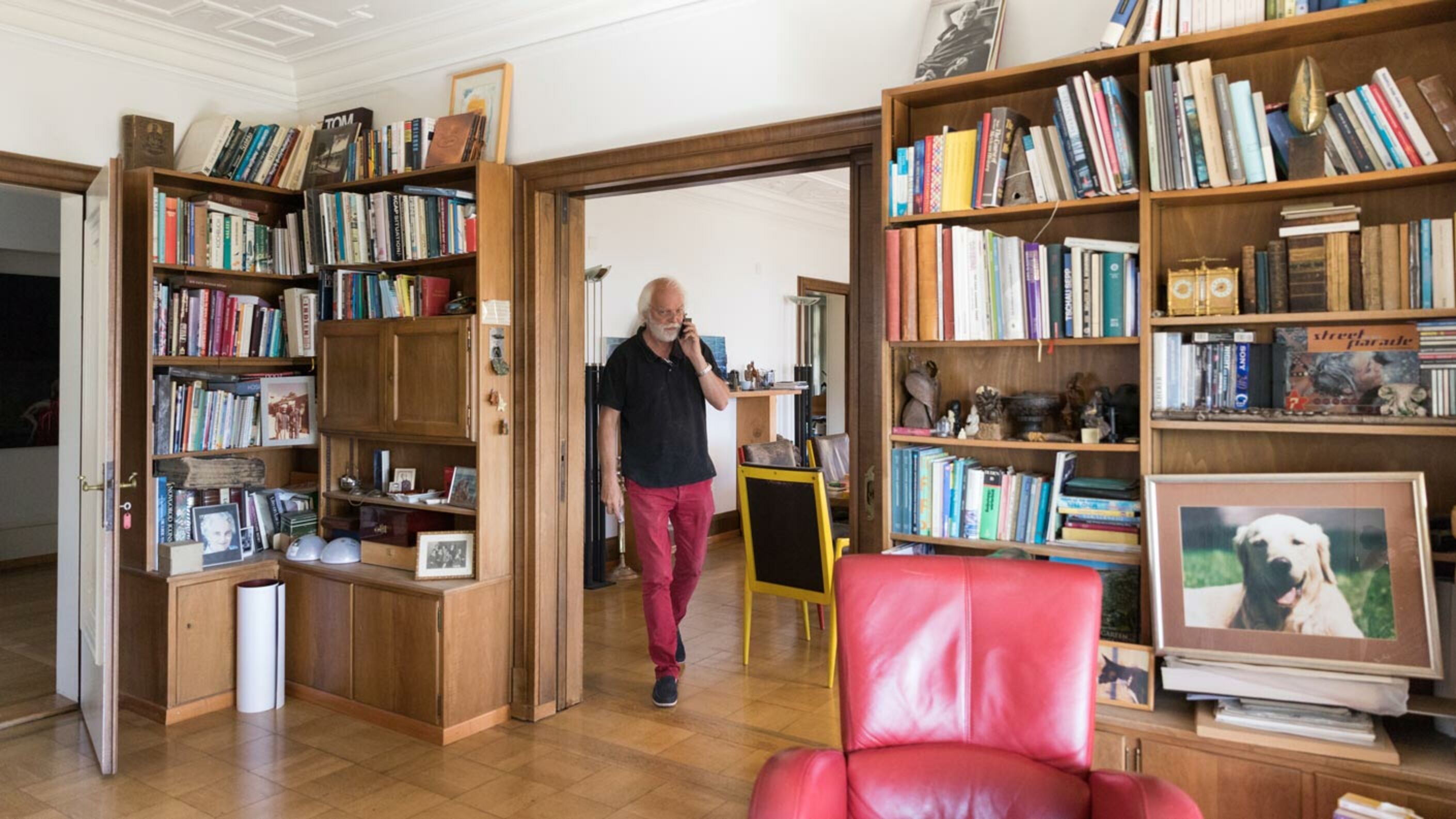 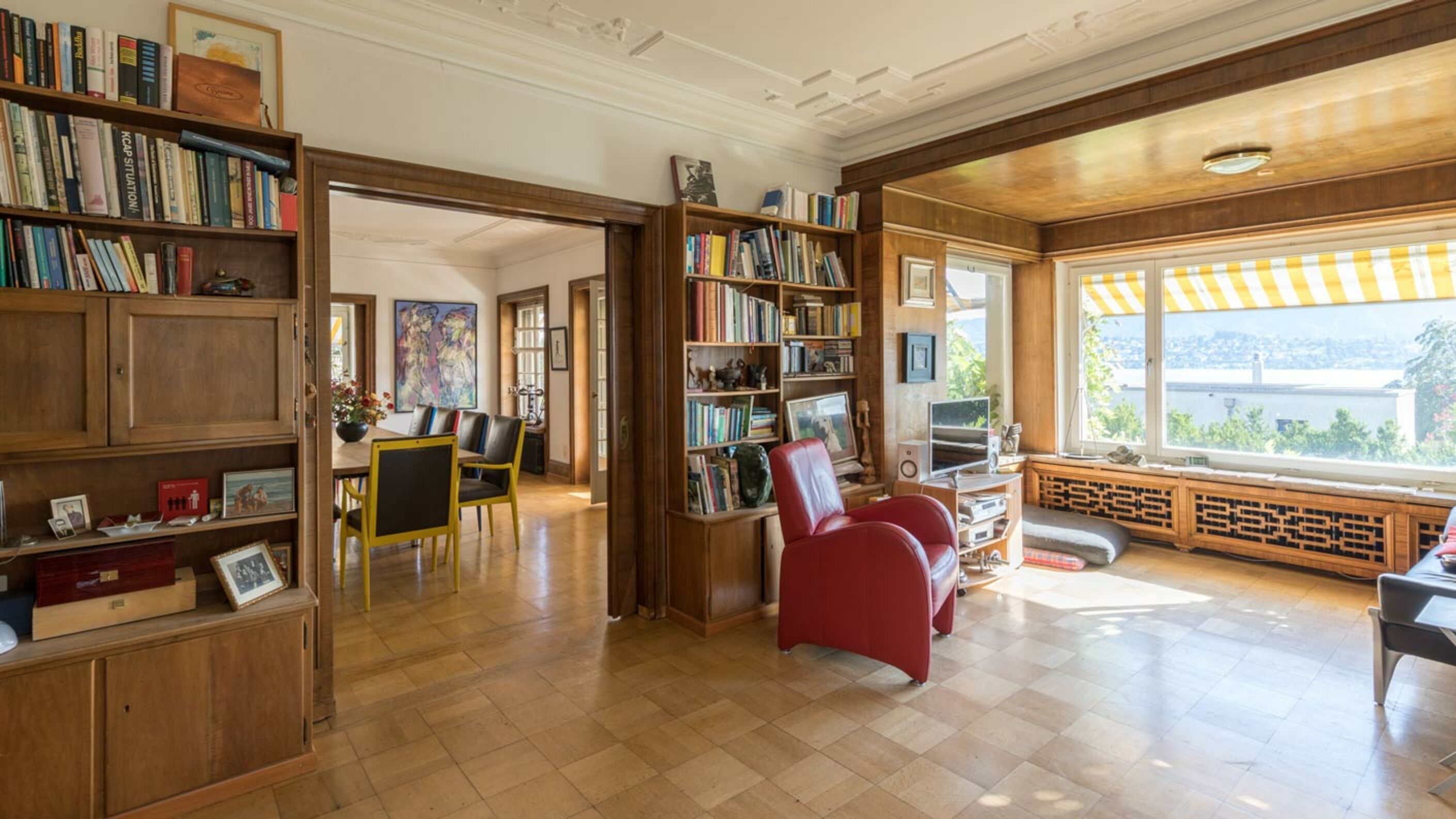 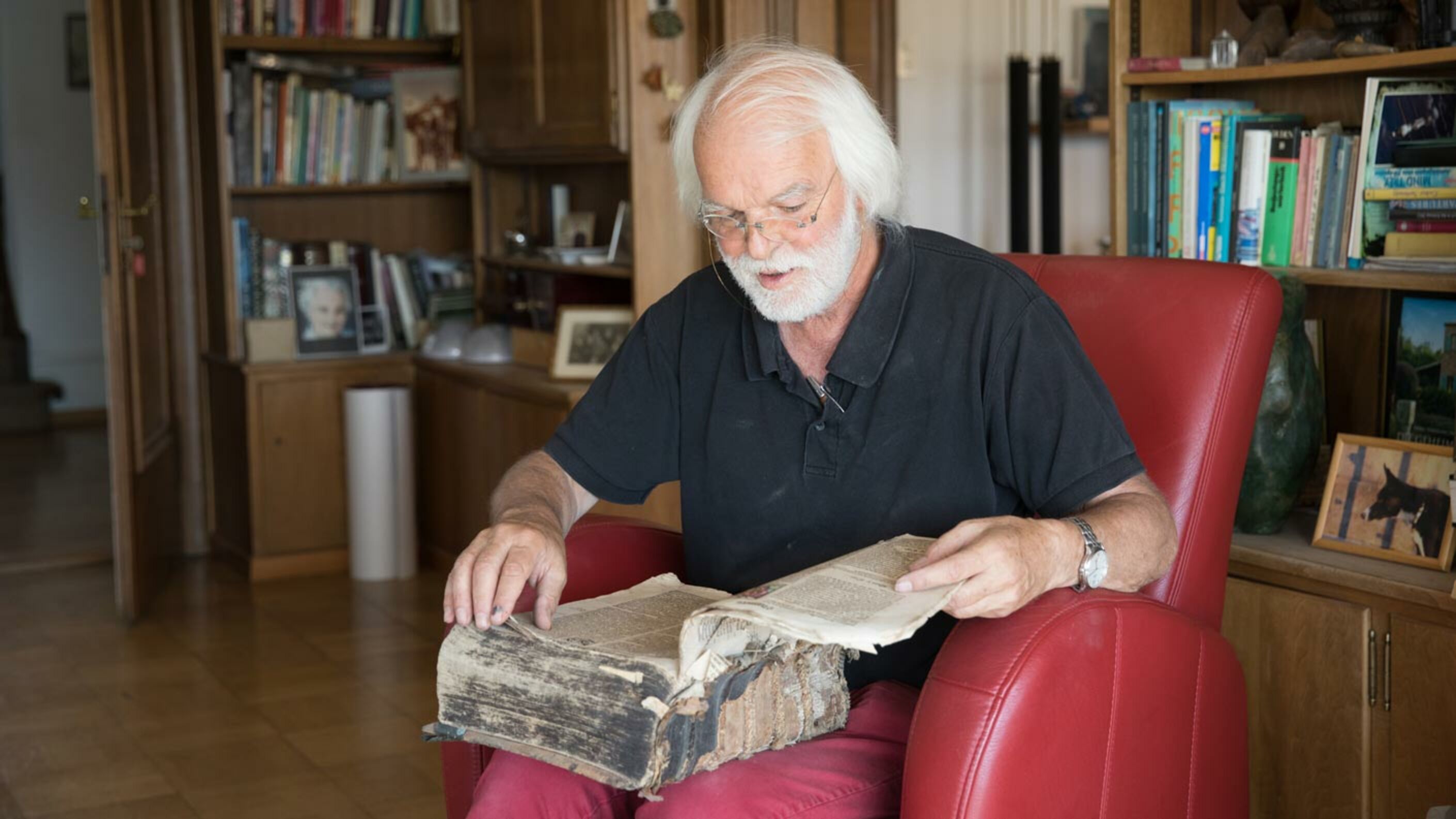 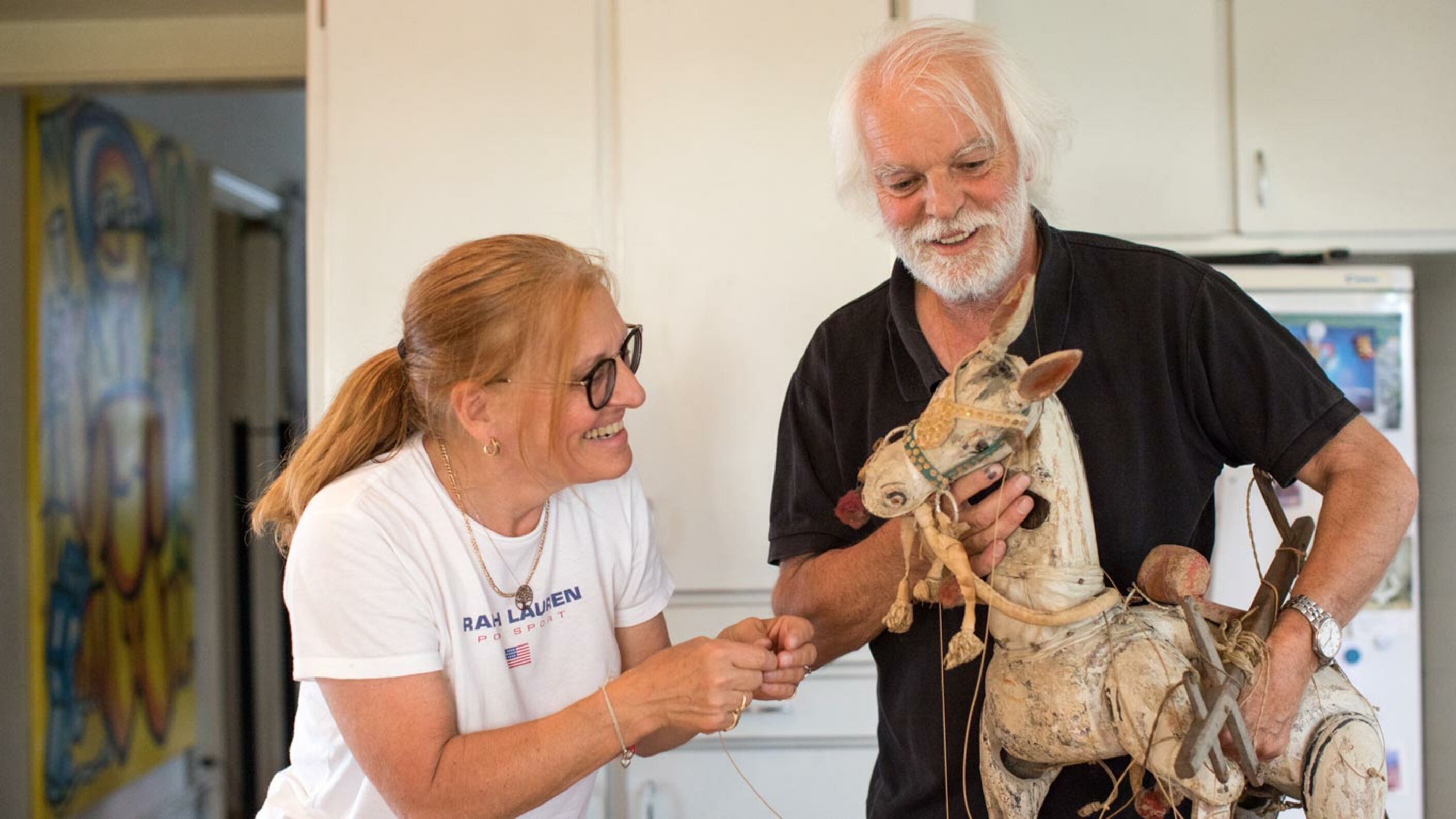 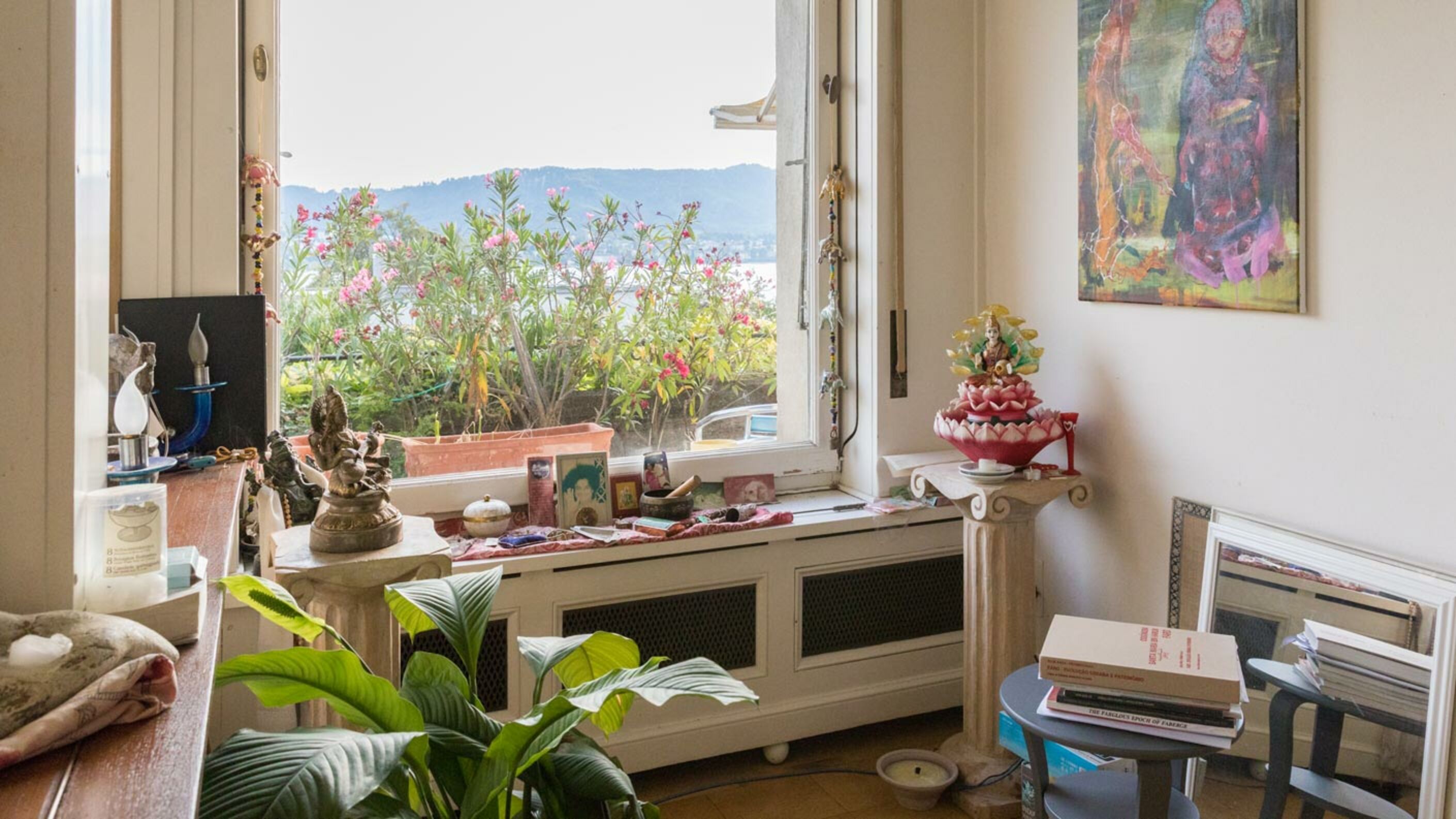 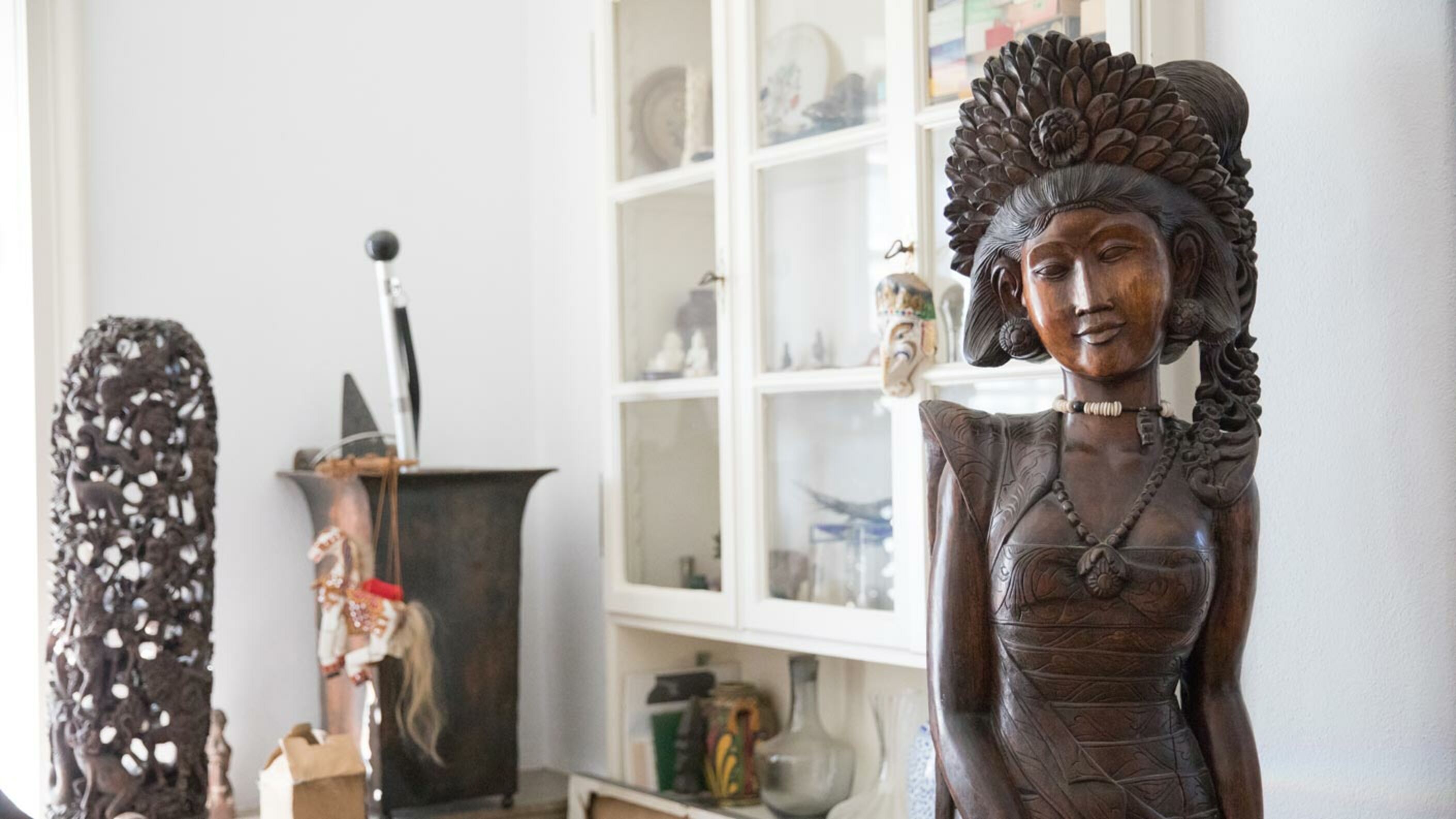 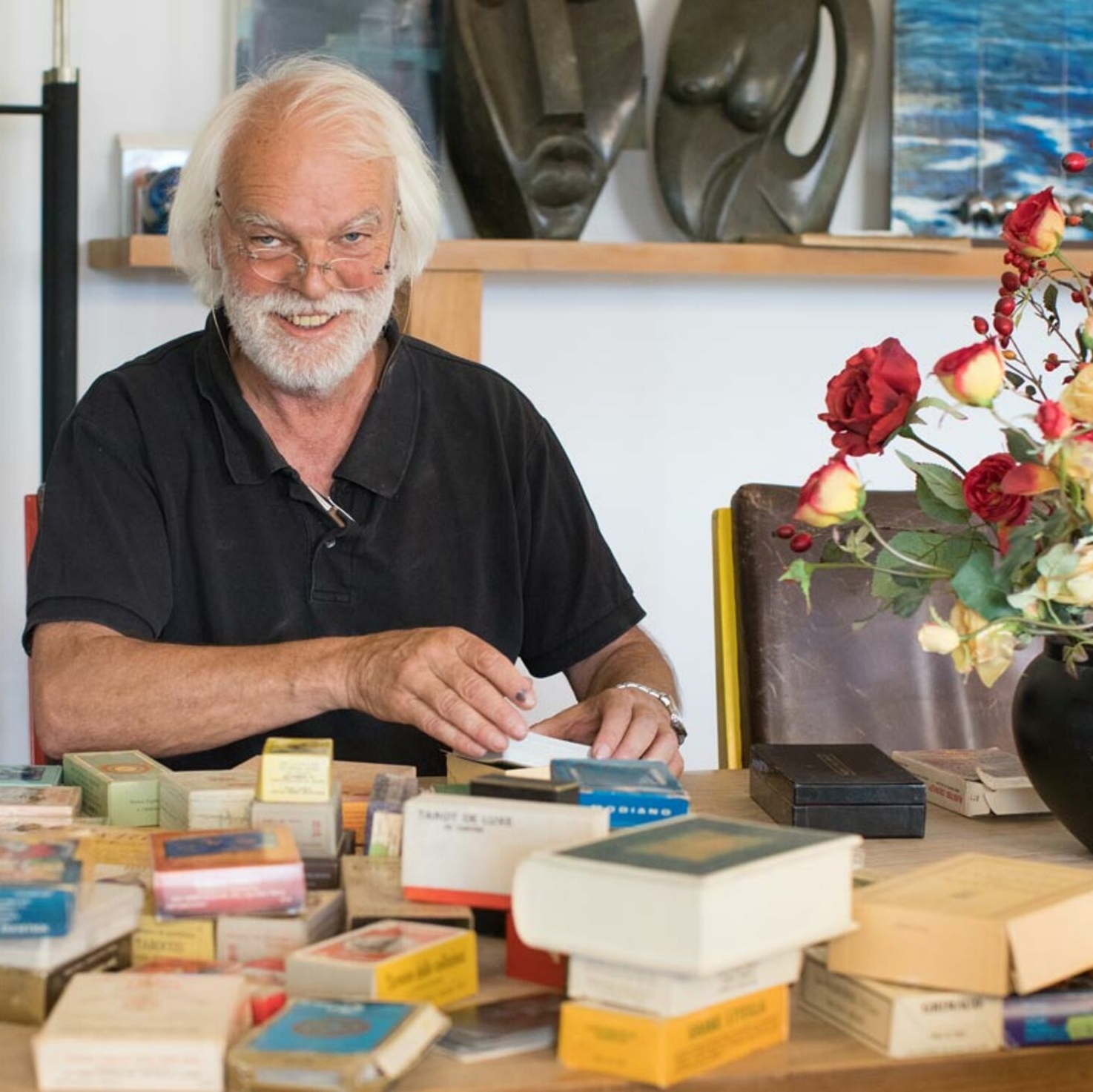 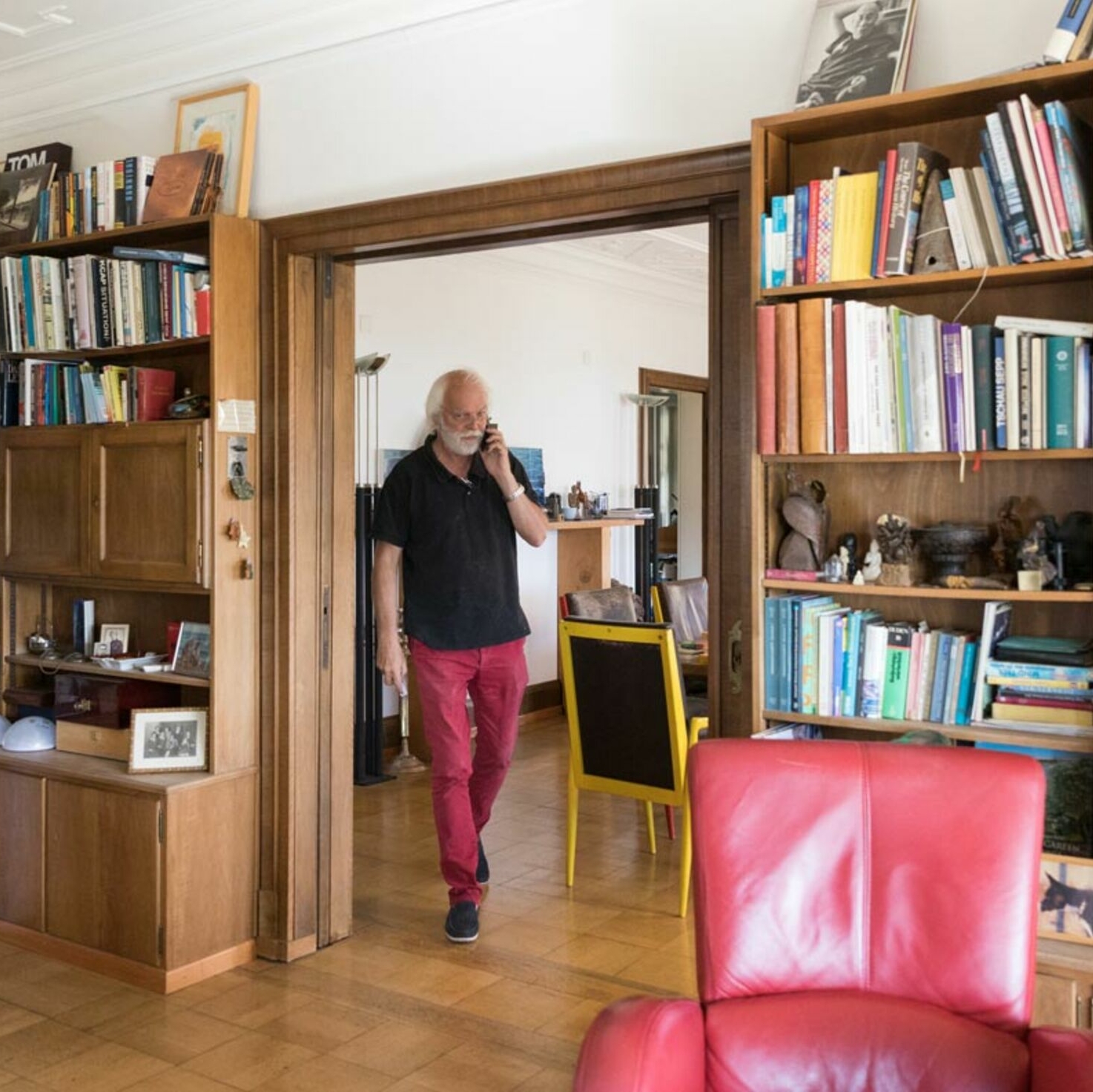 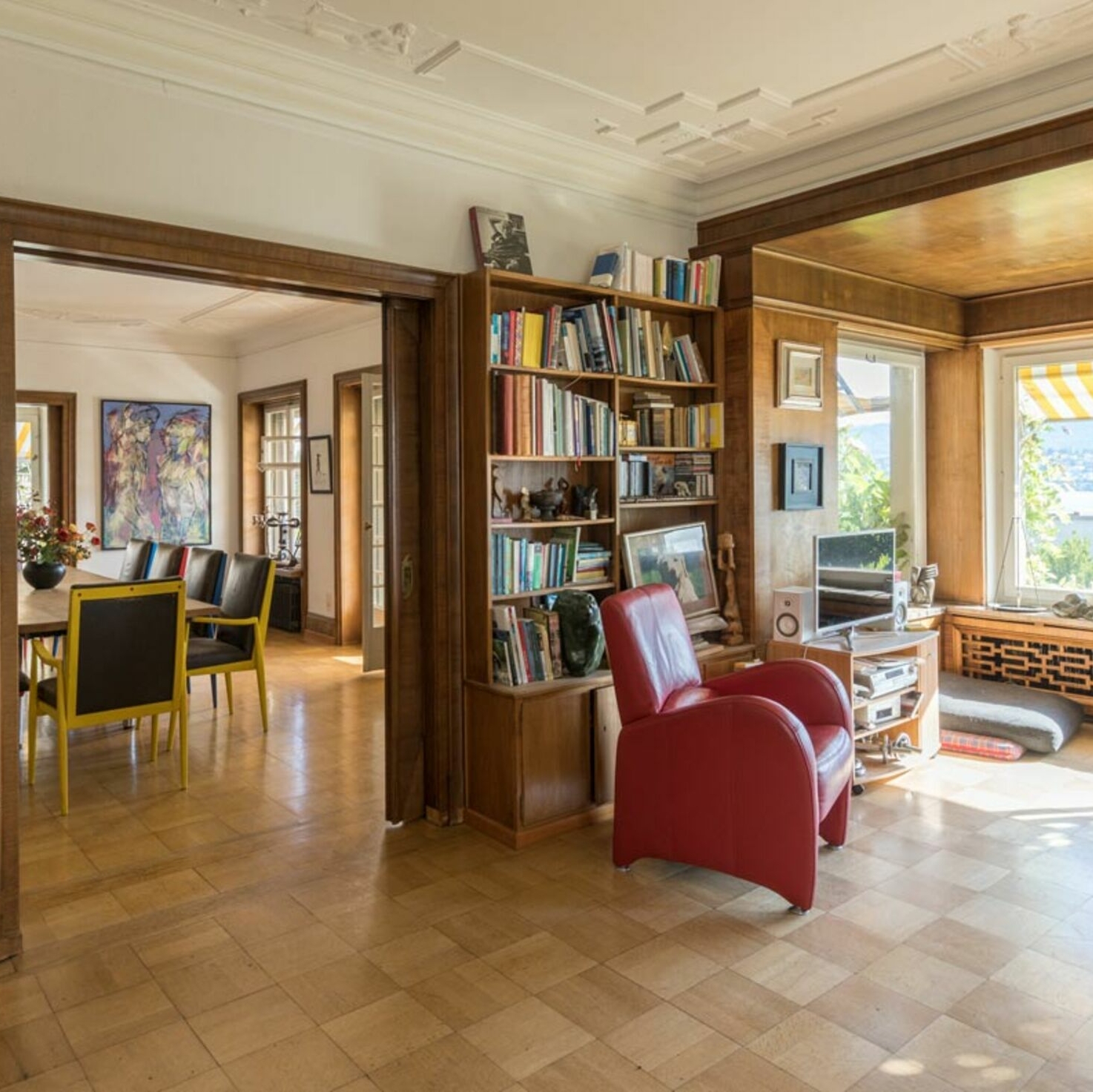 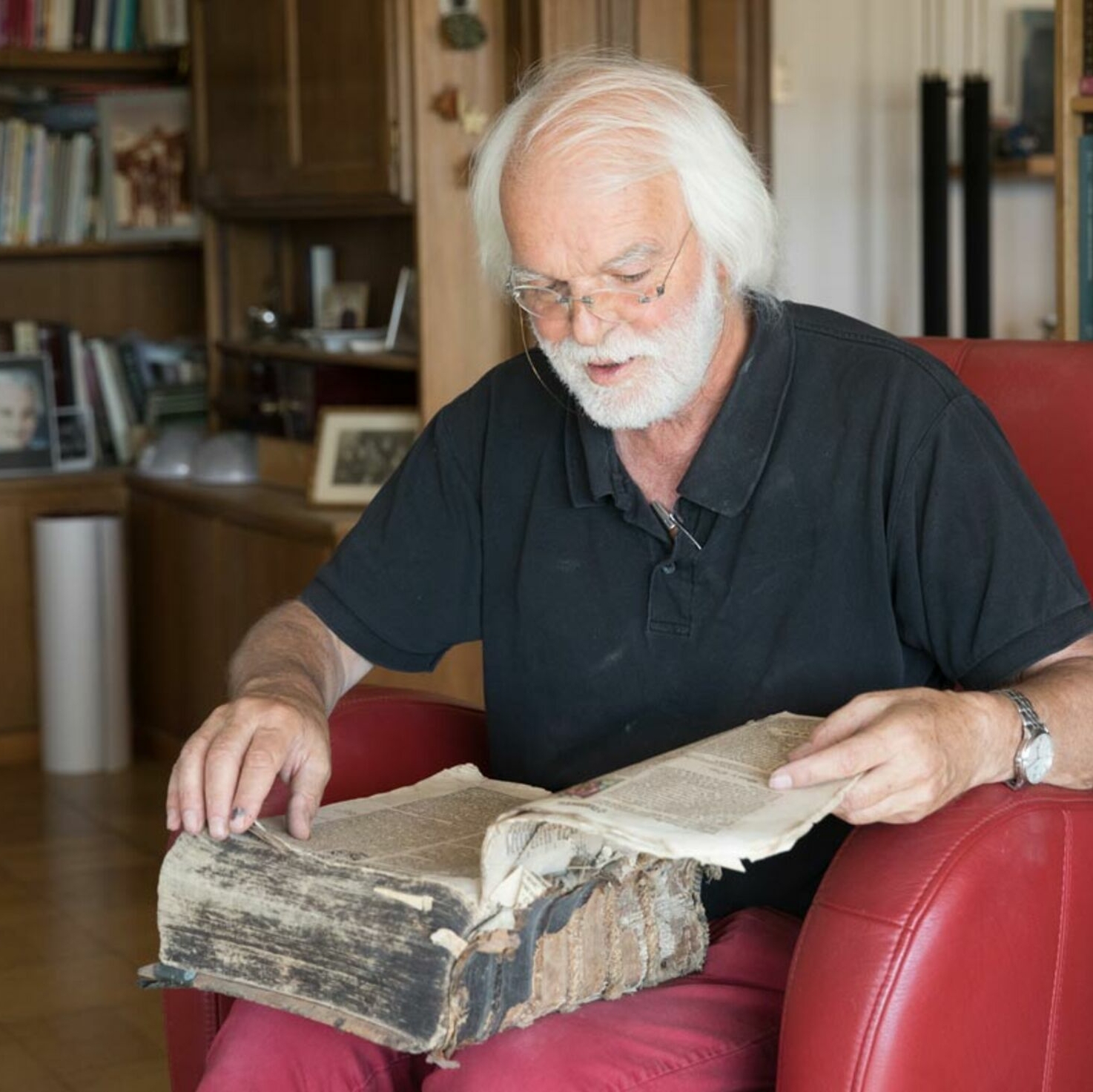 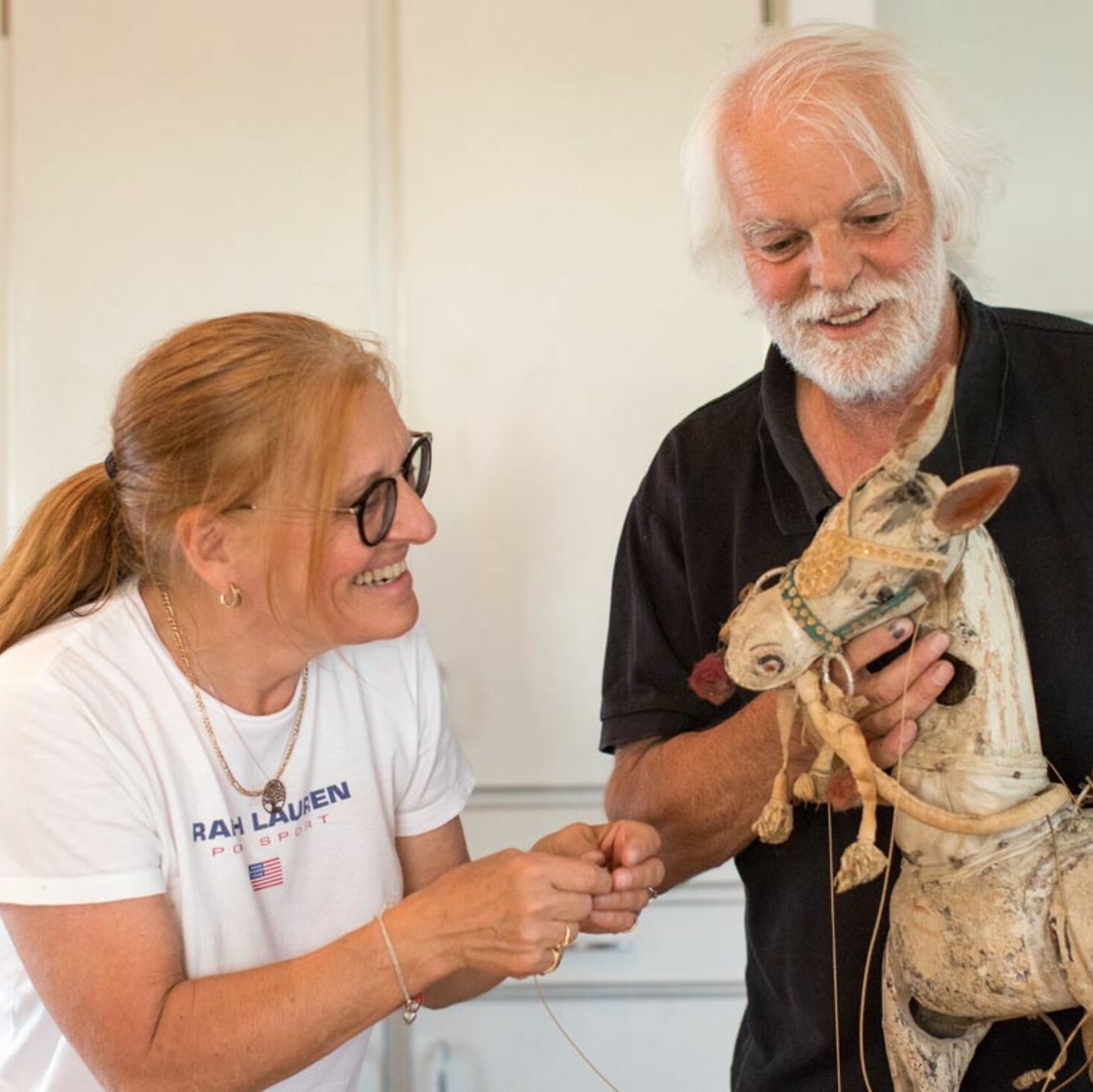 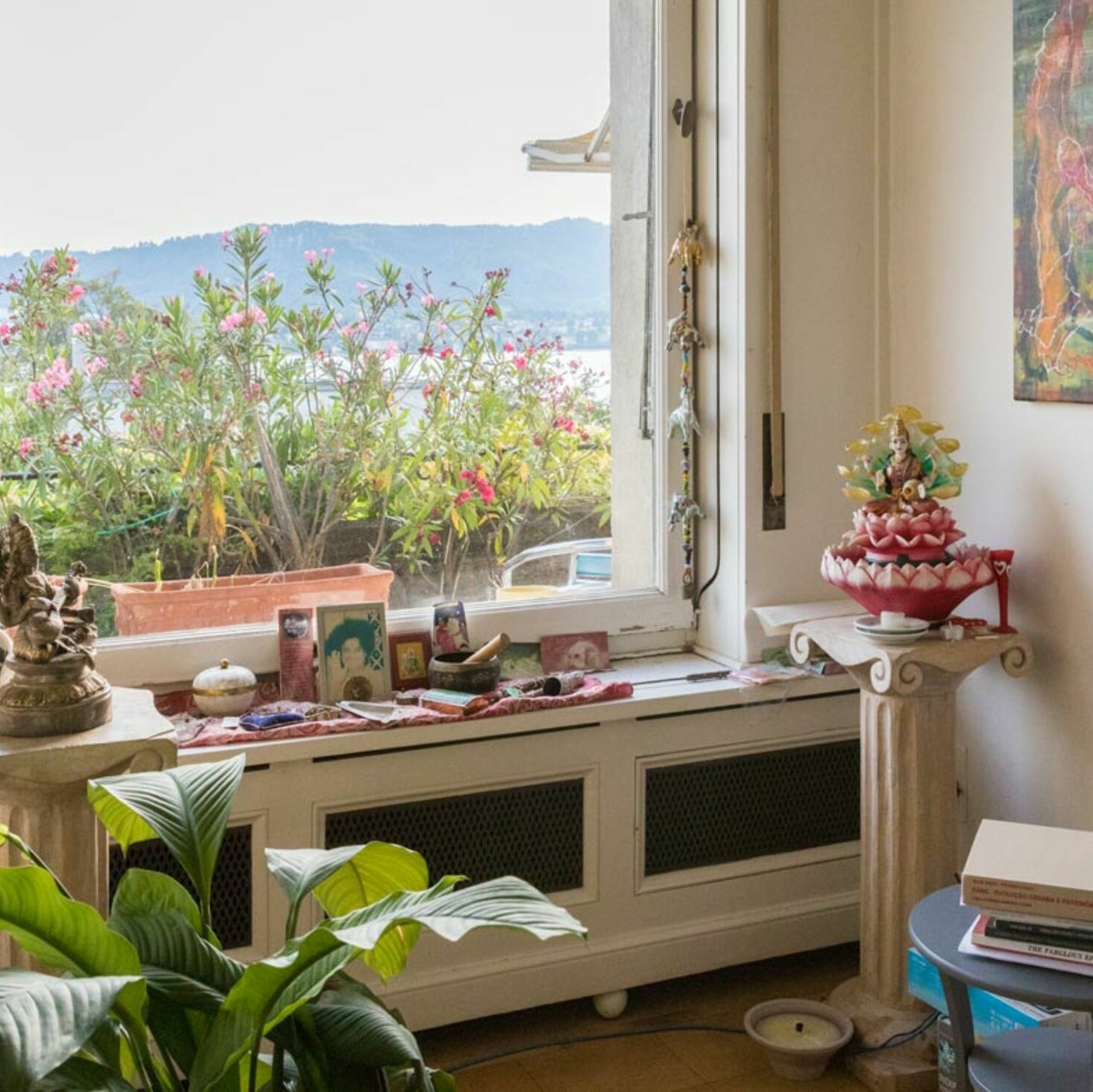 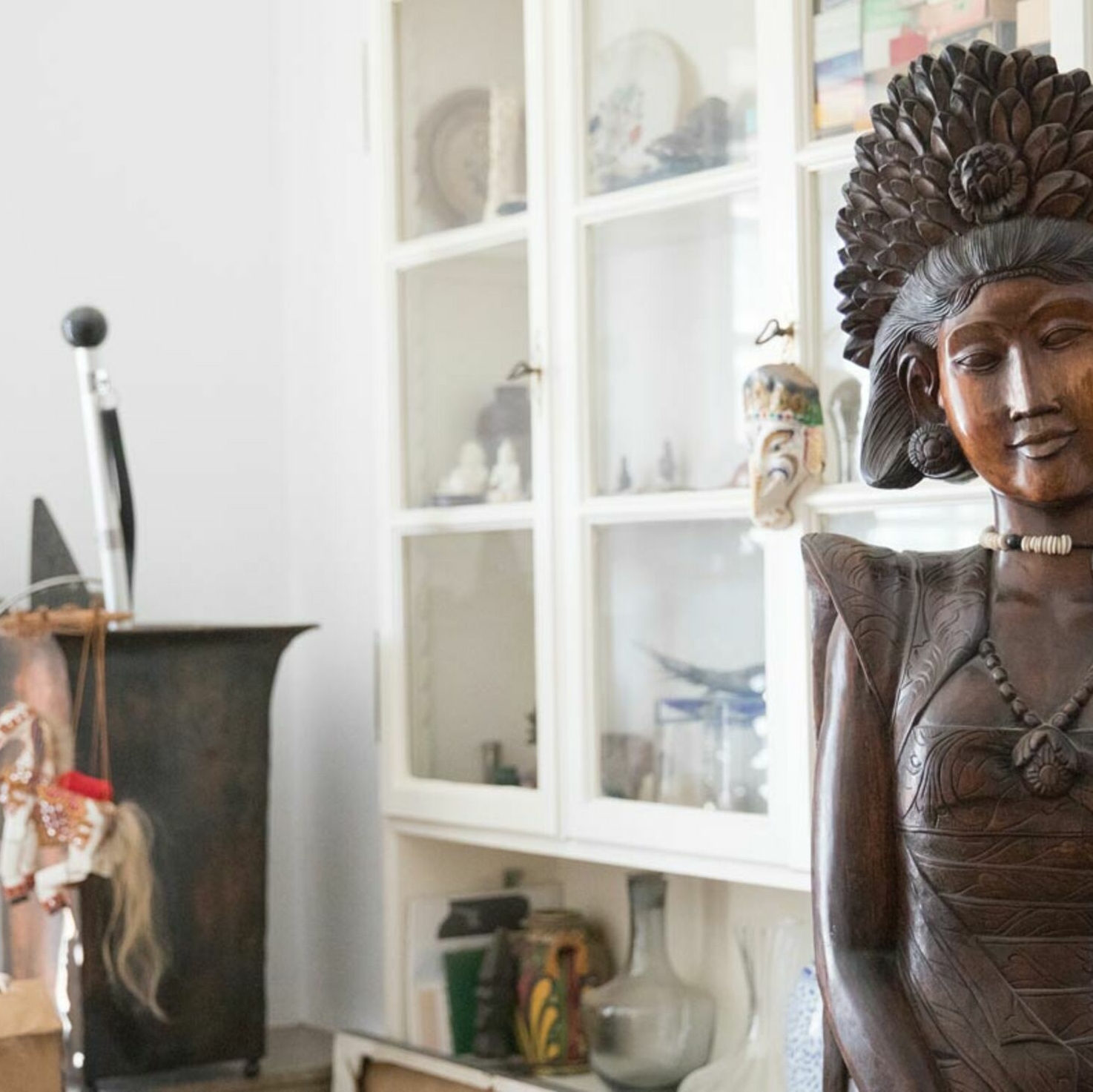 ‘The art is part of the house’

Hindu gods walking on water like Jesus, life-size wooden figures and copies of still-lifes – Pius Müller’s villa is brimming with the art and memorabilia that the former gallery owner and tour guide has collected over the years. We visited him at his home in Seefeld.

Pius Müller thinks Zollikerstrasse is one of the most beautiful streets in Zurich. It stretches from Kreuzplatz to Zollikon and passes through Seefeld. This part of the street is lined with modern apartment blocks and old villas.

One of them is the home of Pius, his wife, and their two dogs, who give us a noisy welcome when we ring the bell at the garden gate. Pius is standing at the door and invites us into the kitchen, his favourite place in the villa. It may not have the lake views and beautiful plasterwork of the other rooms, but it’s cosy and welcoming. ‘In the past we would often have up to 20 guests for lunch,’ says Pius. Those days are gone, ‘but I’m still regularly asked what’s for lunch today.’ Just today, a friend gave him a call because he happened to be in the neighbourhood. Pius spontaneously decided to cook spaghetti Bolognese: ‘I never stand at the stove for more than thirty minutes.’

‘In the past we would often have up to 20 guests for lunch,’ says Pius.

Built in 1921, the villa was standing empty when Pius spotted it on his way to work 21 years ago. At that time, it belonged to the Swiss Electrotechnical Association (SEV). ‘The SEV had installed walls and fluorescent lights everywhere to create offices,’ says Pius. When the SEV built new, larger premises in Fehraltorf, it wanted to sell the buildings in Seefeld, ‘but the price scared everyone off,’ says Pius.

Pius was a good negotiator and finally took ownership of the property in September 1997.

But he was a good negotiator and finally took ownership of the property in September 1997. For a month, he gathered friends and acquaintances to help him work on the property. They removed carpets, pulled down walls, installed new water pipes and plastering.

Then Pius also breathed new life into the remaining SEV properties close to the villa. Later on, he joined forces with an architect and an investor to purchase all the properties. Under Pius’ direction, workspaces and offices for creatives were set up on Seefeldstrasse, including Zurich designer Alfredo Häberli. For a friend who was a gallery owner, he built a gallery out of three truck garages. But when his friend suddenly no longer had any need for it, Pius took over the Artseefeld gallery and ran it himself for seven years. During the summer break he supported young artists with the Young at Art project. Young artists spent around two months learning how a gallery and the art market worked. ‘If you want to be successful as an artist, you have to have a true passion for it and not be afraid of insecurity,’ says Pius.

His large villa houses countless pictures from all over the world. ‘They are as much a part of the house as the walls,’ says Pius. He can tell a personal story about every work of art. Such as the small still-life in the kitchen that he bought from a 92-year-old Italian many years ago. ‘I was in the old town of Figline in Tuscany,’ recalls Pius. He was in a food store when he noticed a nice picture. He asked the salesman who painted it – and ended up visiting the artist, who told him how he only discovered his love of art after he retired, during a visit to the Louvre. Once he got back to Italy, he began copying pictures from books. ‘At first he didn’t want to sell me any of his works,’ says Pius with a laugh.

The drawing hanging in the living room comes from India: ‘Thirty years ago, no modern art was being created in India. Artists who wanted to learn about modernism moved to Paris,’ he explains. This was the case with the Indian artist whose works provide a new interpretation of Ganesha, the elephant god, linking it to different religions. Pius’ picture shows Ganesha walking on water like Jesus. These kinds of pictures caused an outcry among devout Hindus. The artist even received death threats and needed police protection. But now he is considered to be one of India’s greatest artists and runs a gallery of contemporary art in Goa.

The house is also adorned with souvenirs that Pius has brought back from his travels, such as a life-size wooden figure from Bali: ‘Tourists can only take small souvenirs with them on the plane. Luckily, I was able to ship them. The shipping often costs more than the object.’ Pius was a tour guide for 16 years. In summer he would accompany American travel groups around Europe, and in winter he travelled all over the world: ‘At that time I would sometimes sleep in strange beds 300 nights a year.’ During this period, he was still living in Lucerne and Zofingen, where he owned two restaurants.

Pius was a tour guide for 16 years. In summer he would accompany American travel groups around Europe, and in winter he travelled all over the world.

Pius says that in the past, people might have made one big trip in their lives, ‘but nowadays nearly everyone is always flying somewhere. On holidays, city trips or just to a concert or festival.’ This has resulted in many cities and regions becoming totally overrun. That’s one of the reasons why he gave up his job as a tour guide. ‘Years ago, everything was open, you could visit the Taj Mahal at any time and you didn’t need to make a reservation for the Sistine Chapel,’ says Pius. ‘Today everything is regulated and overused.’

‘We felt like we were stood in a fridge’