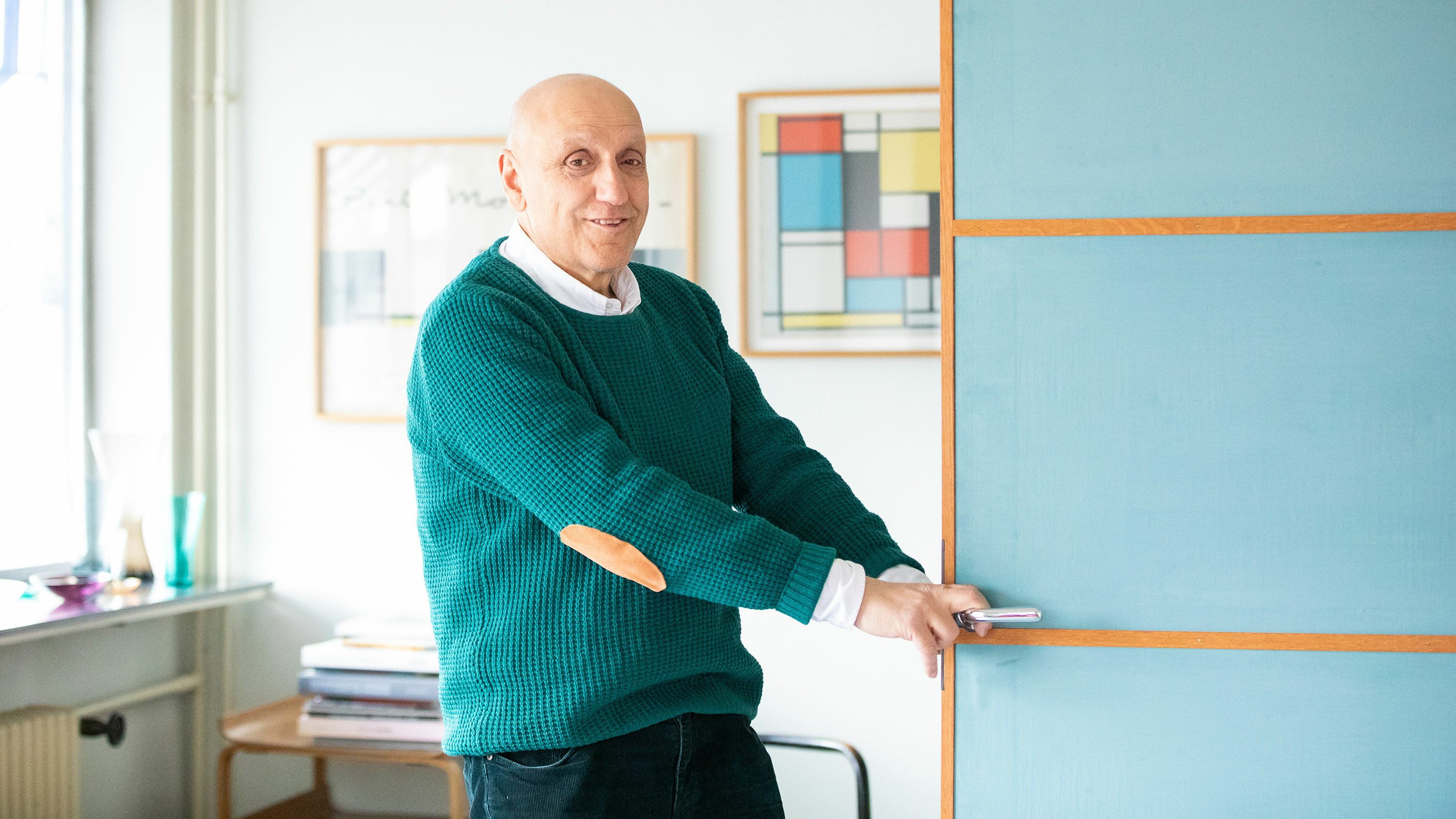 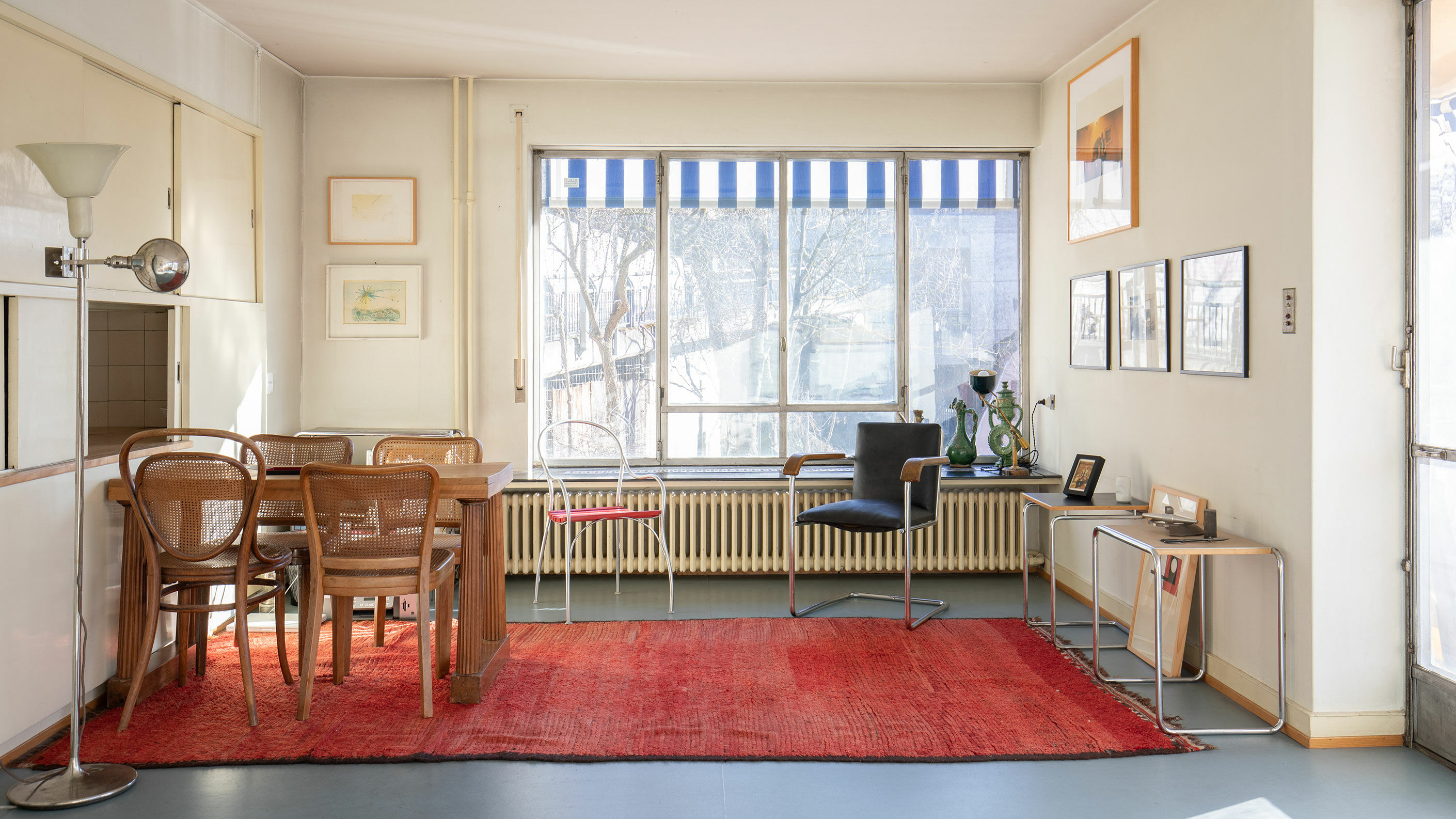 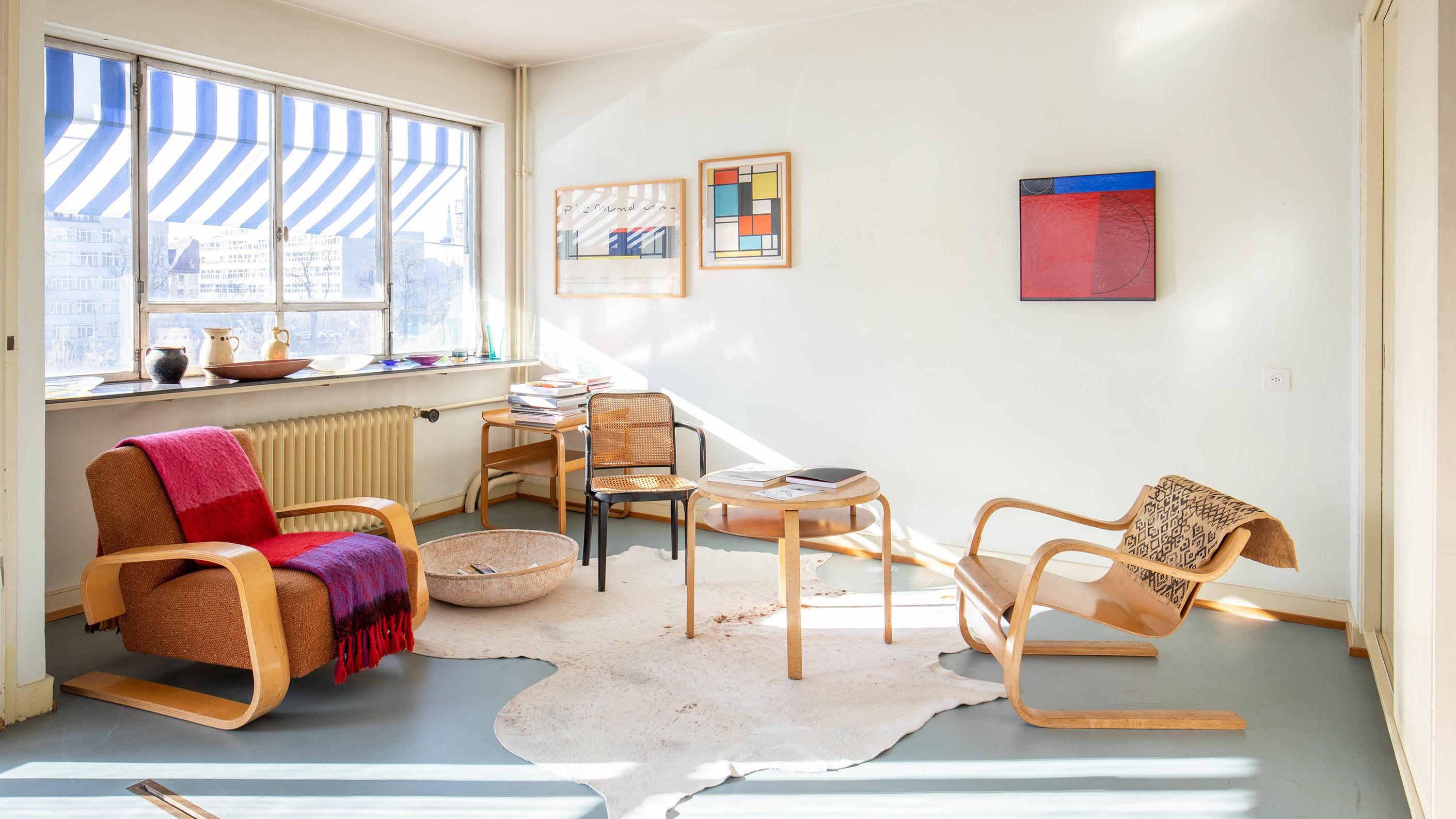 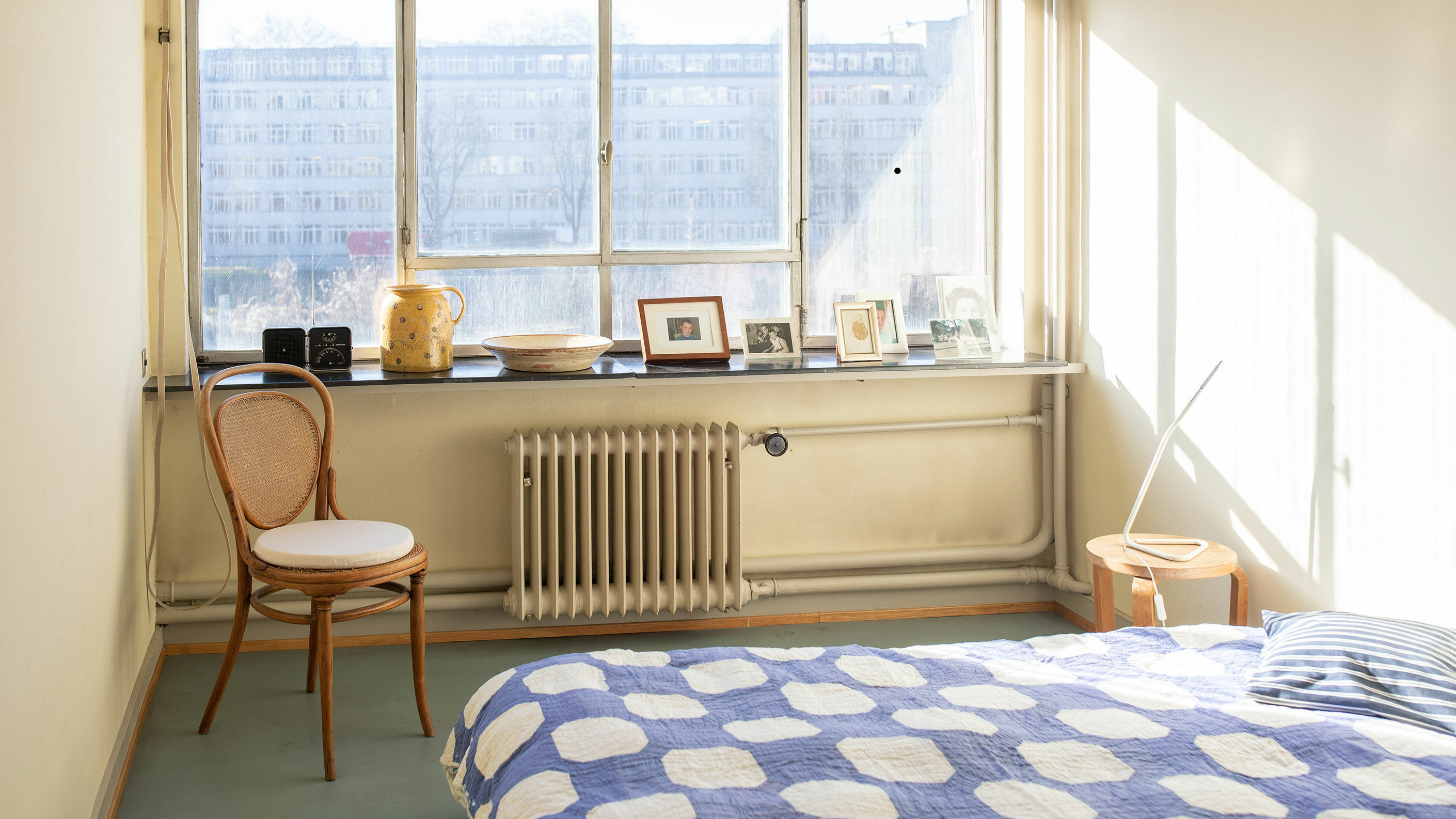 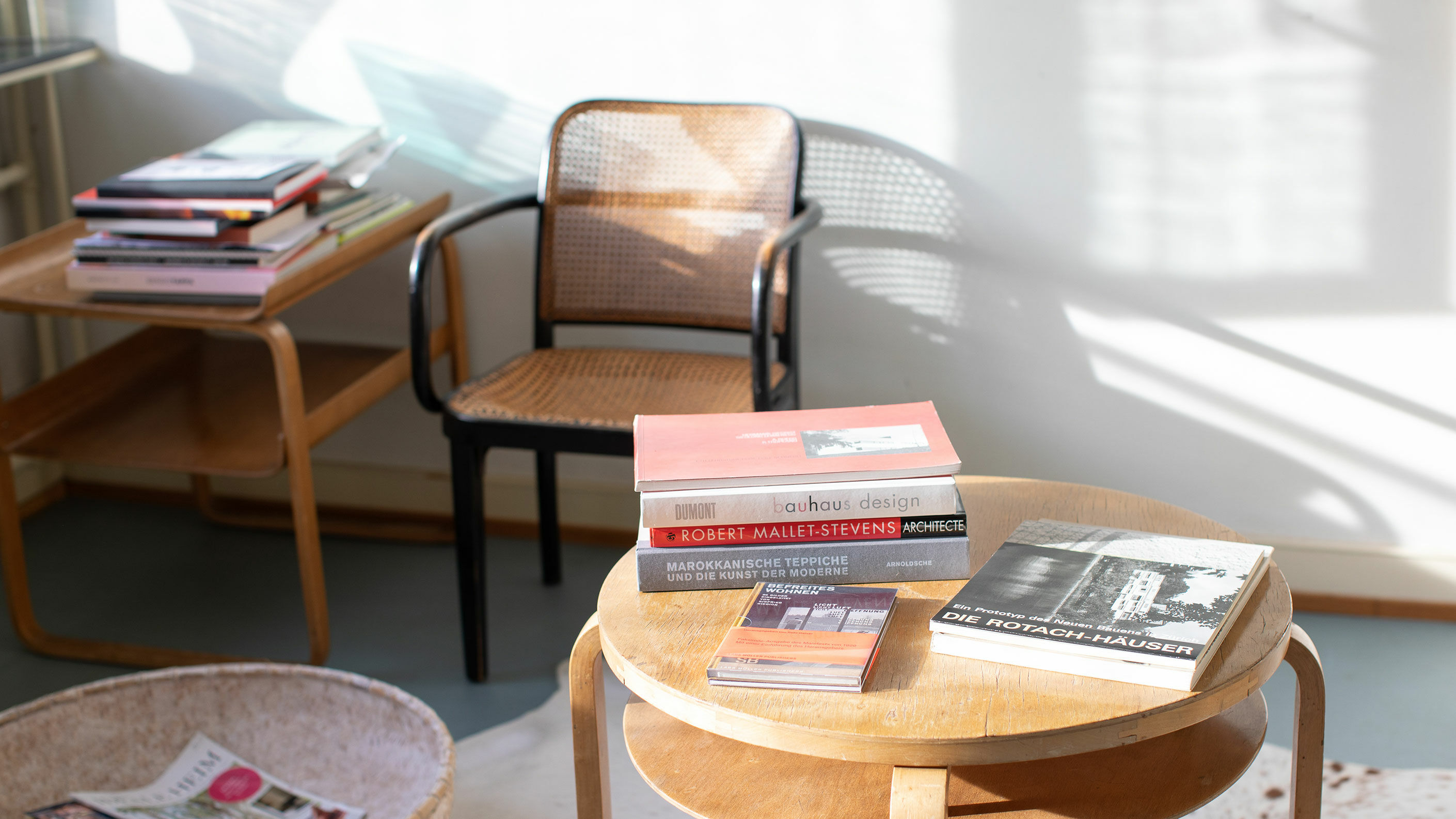 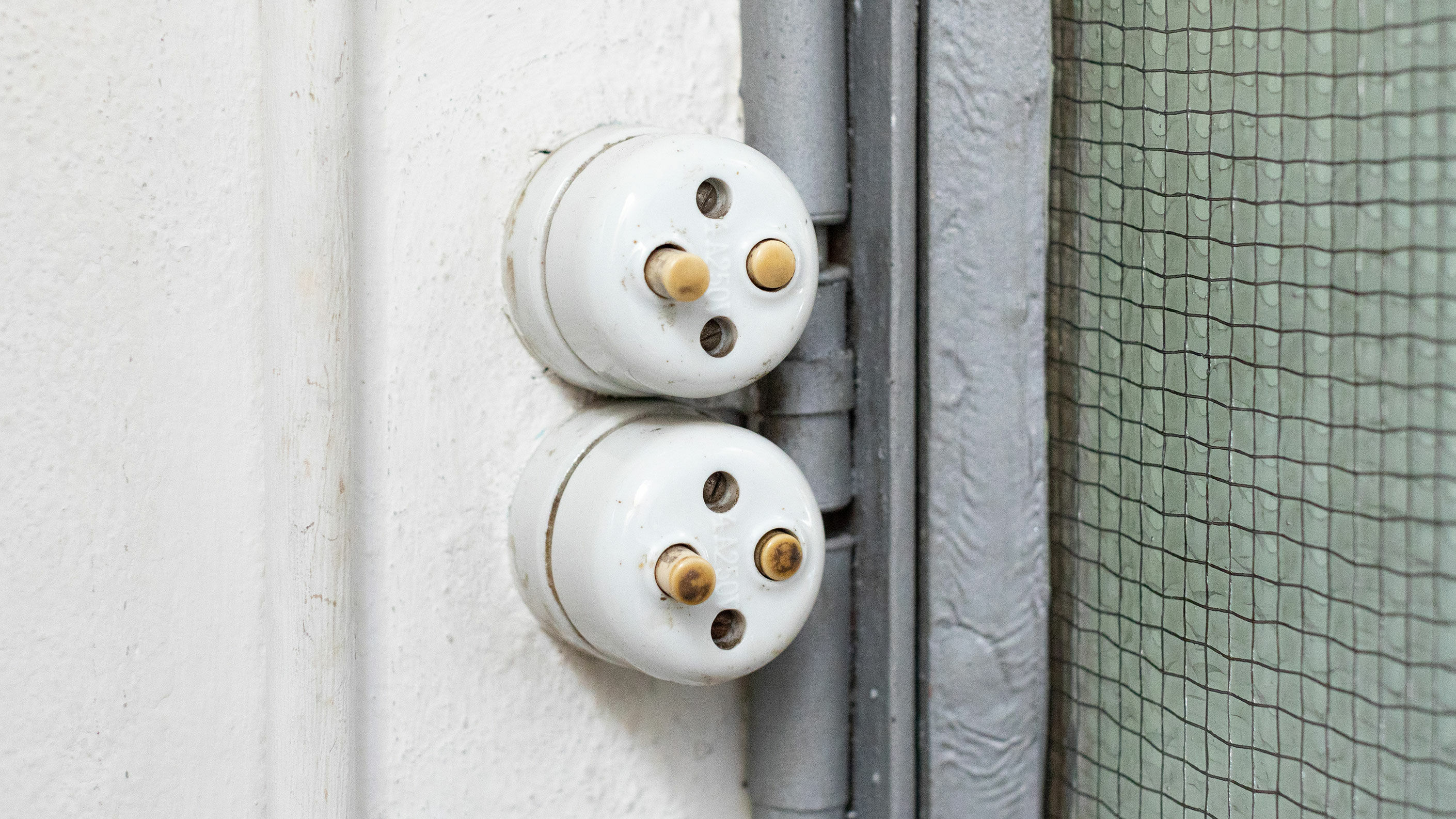 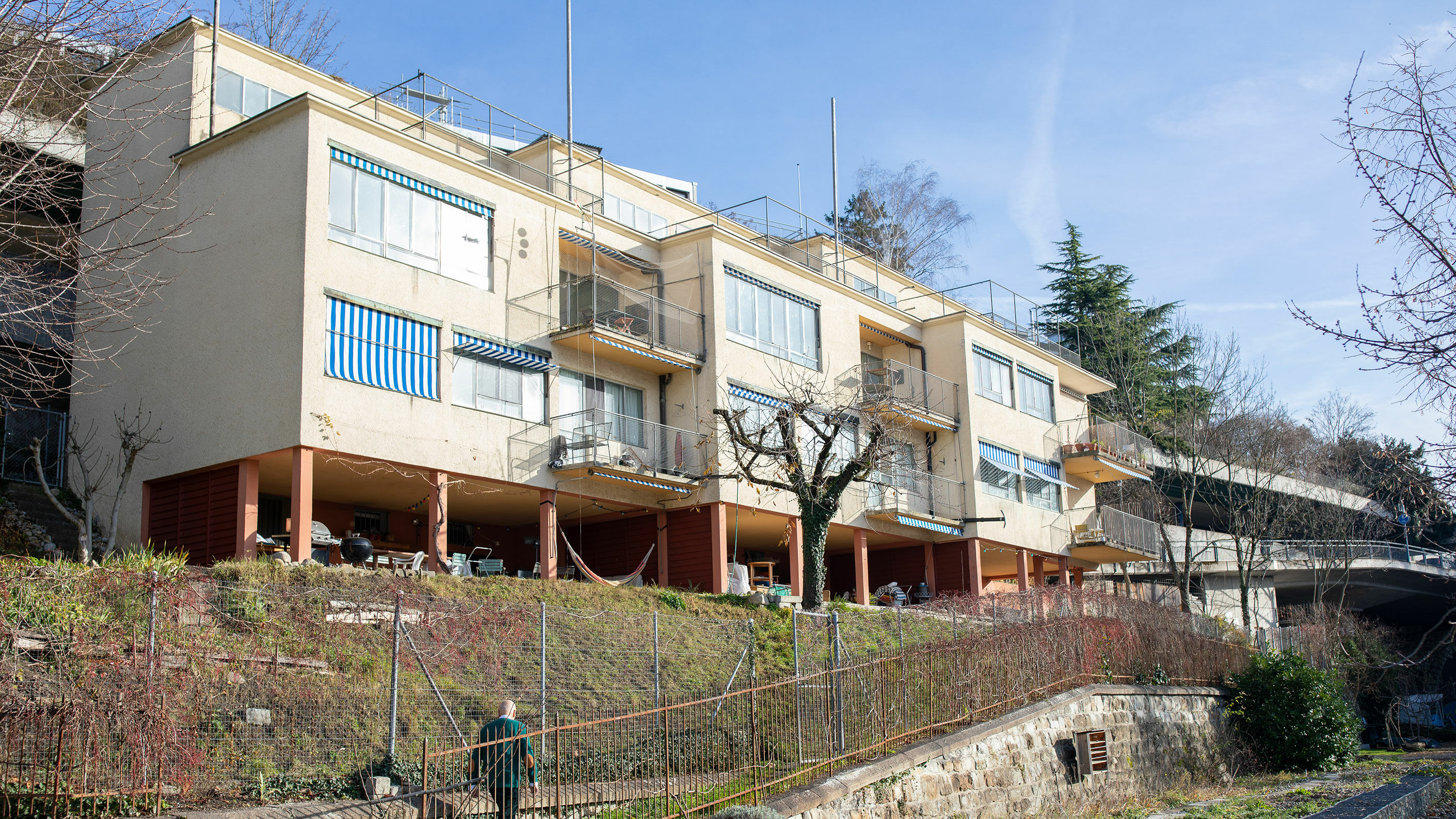 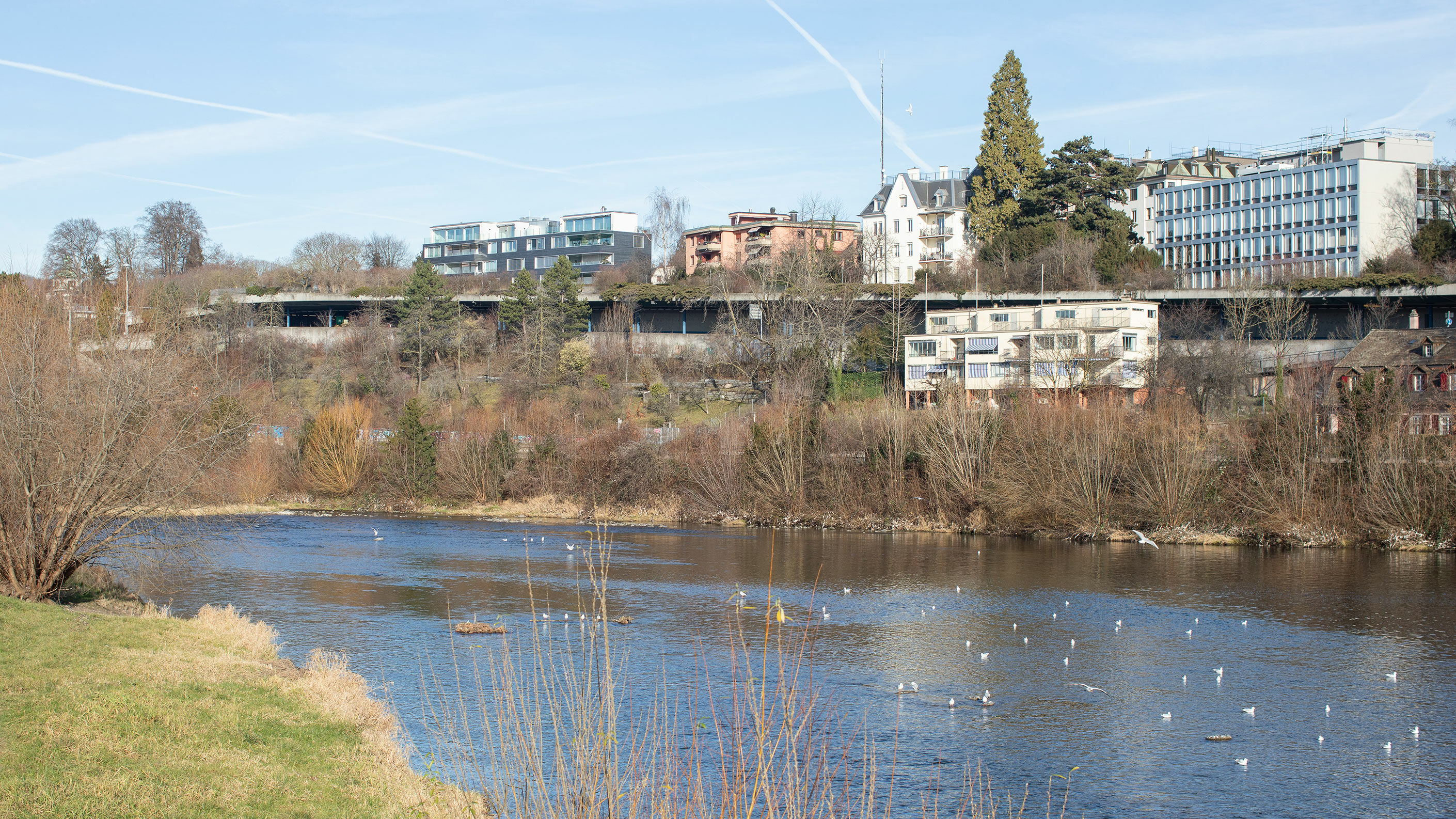 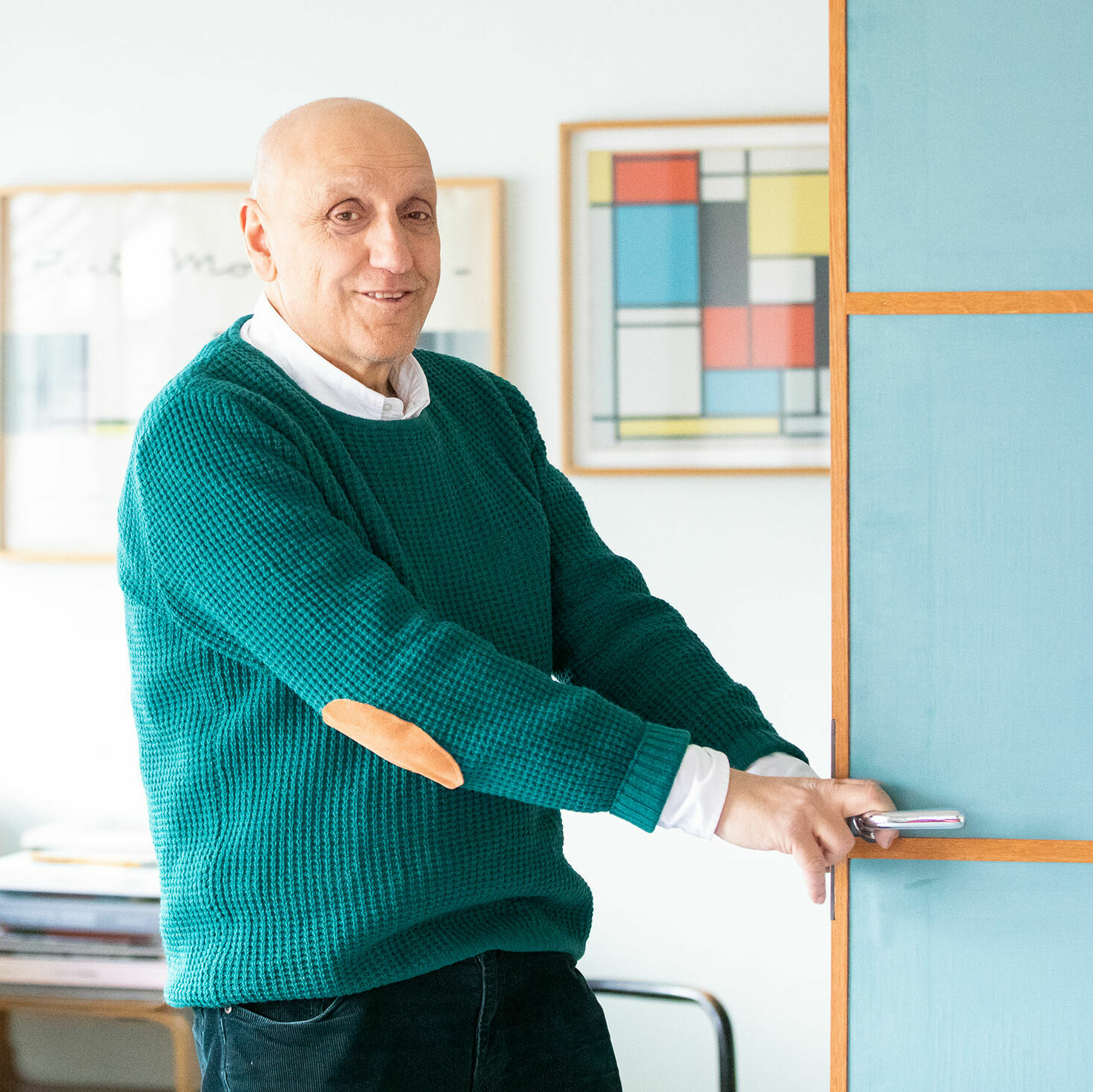 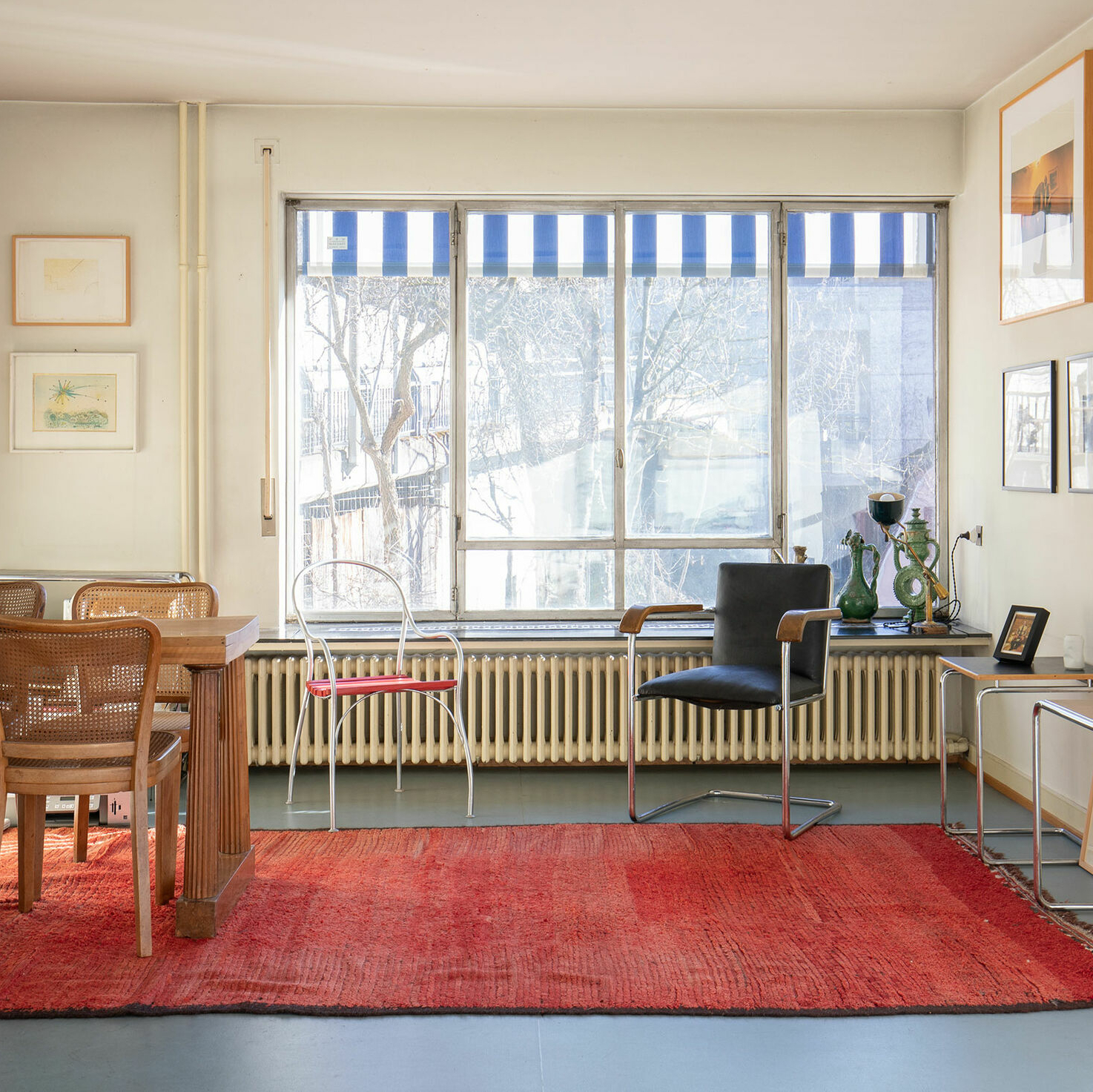 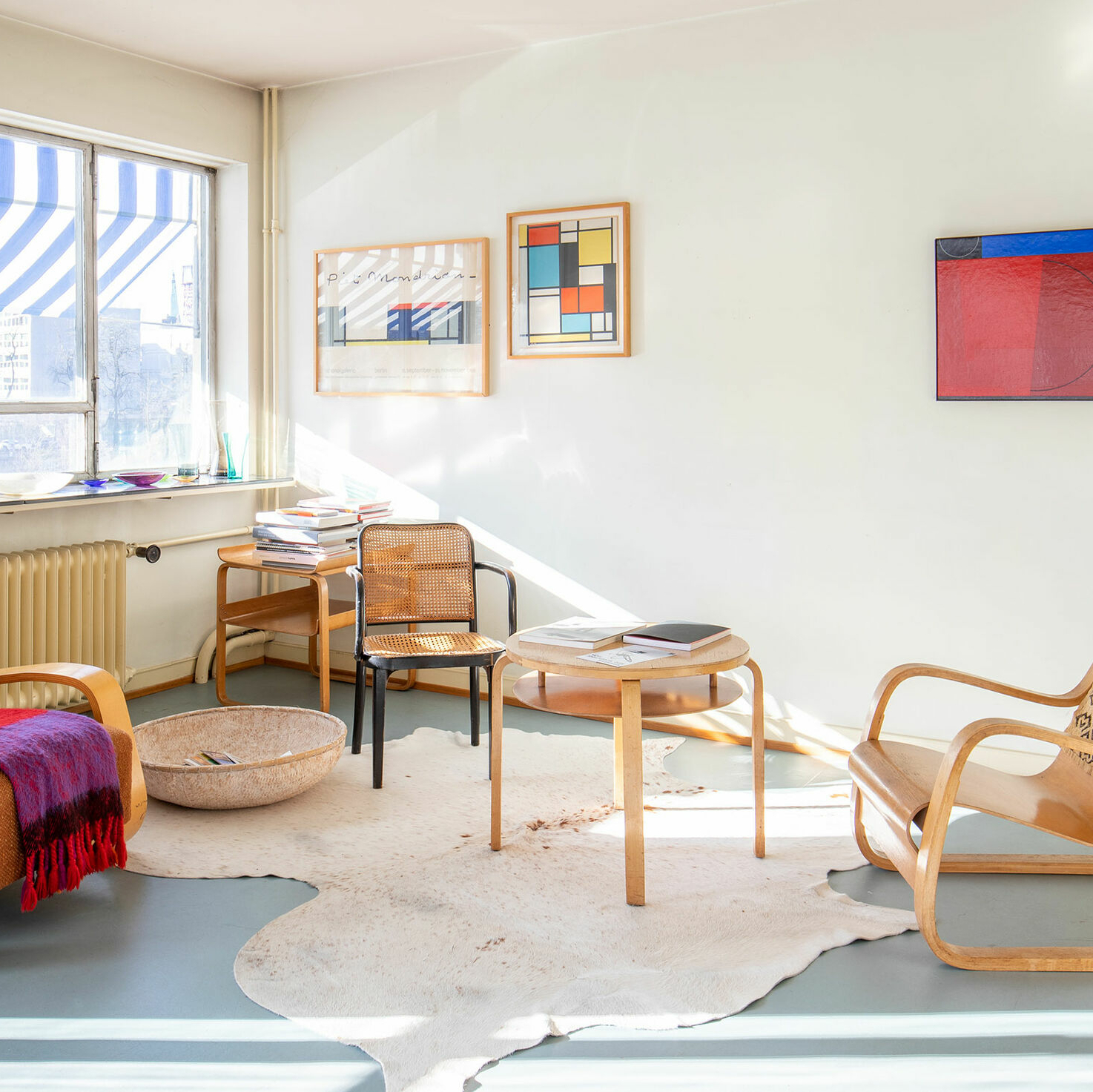 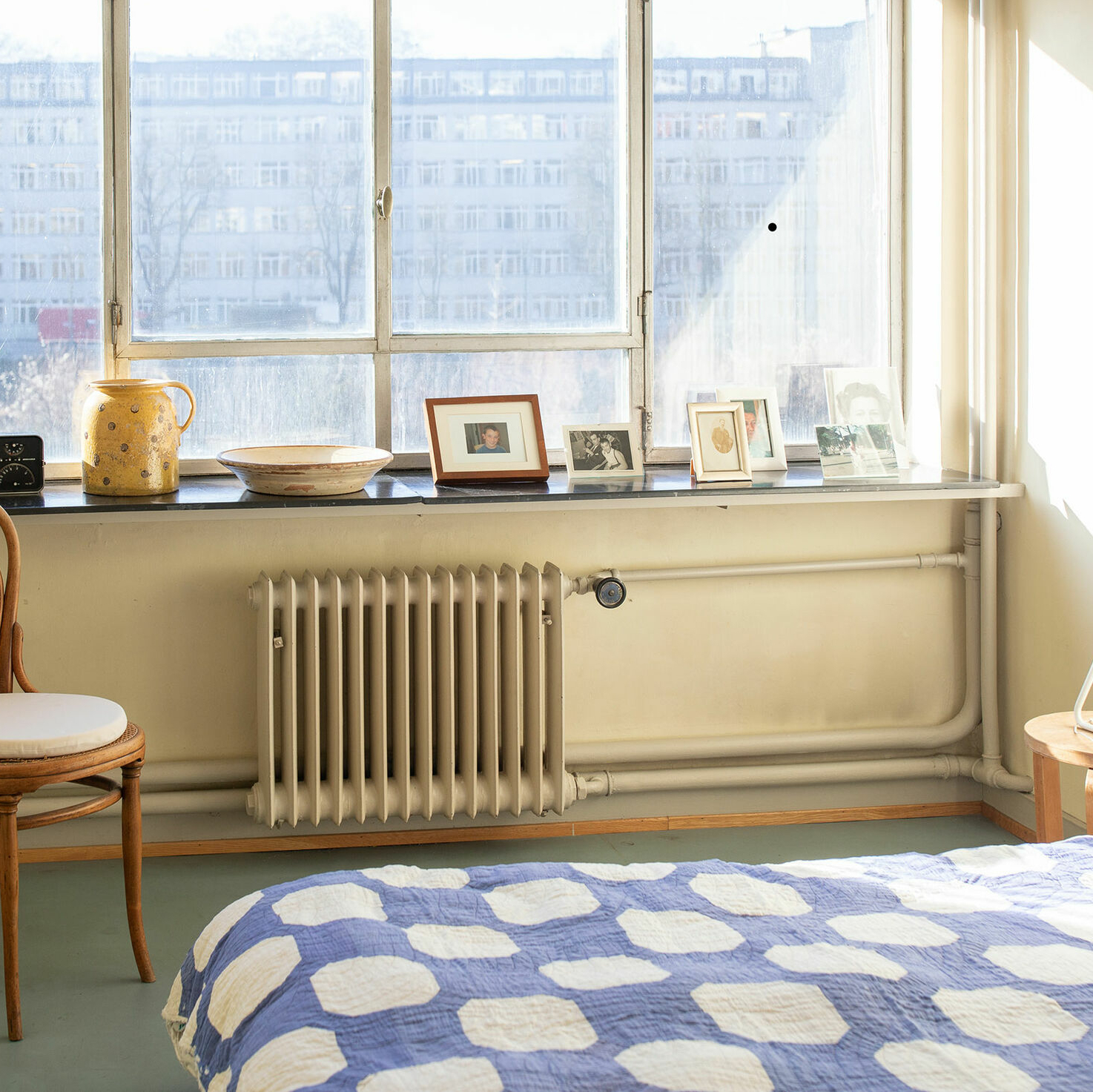 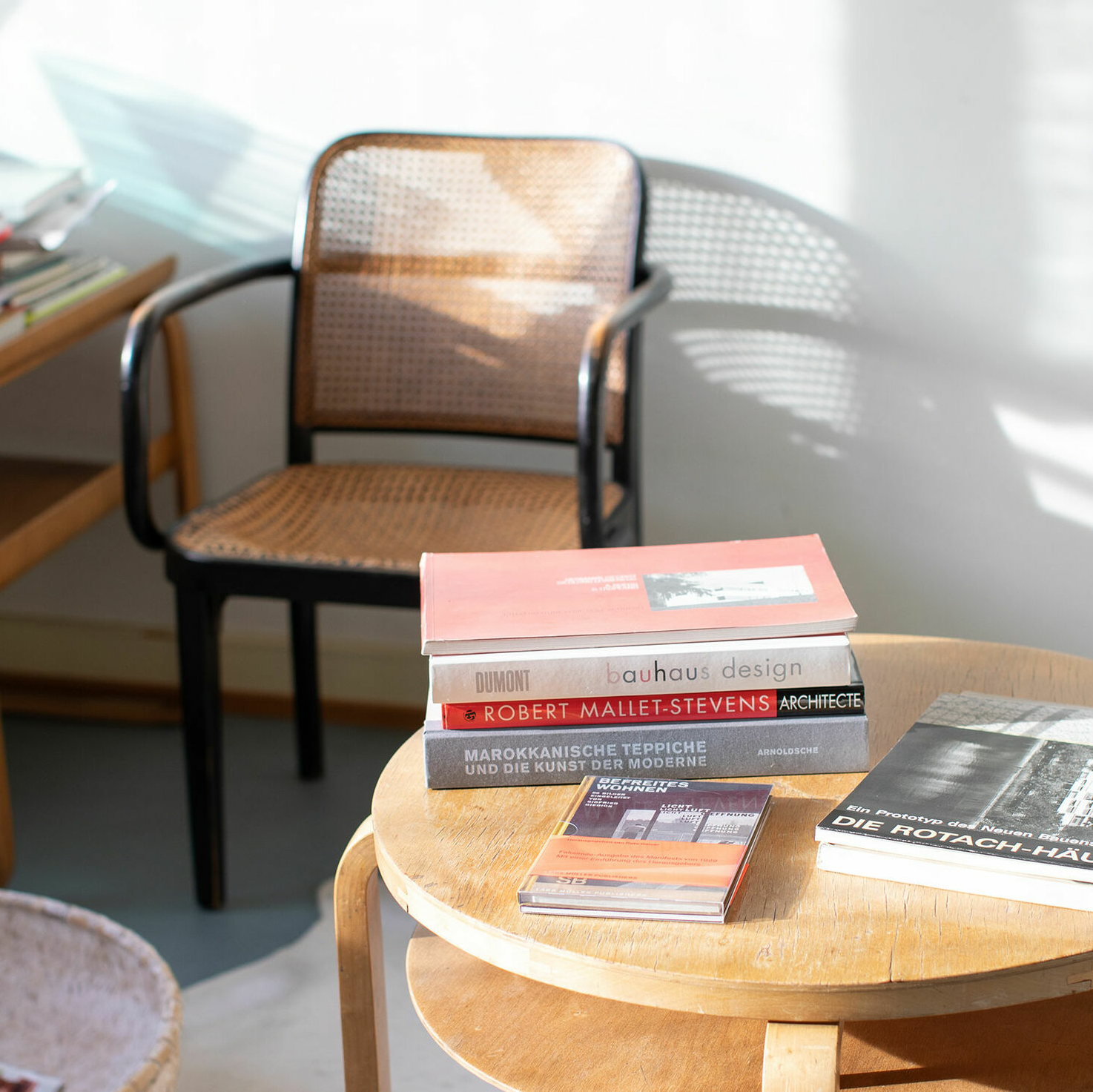 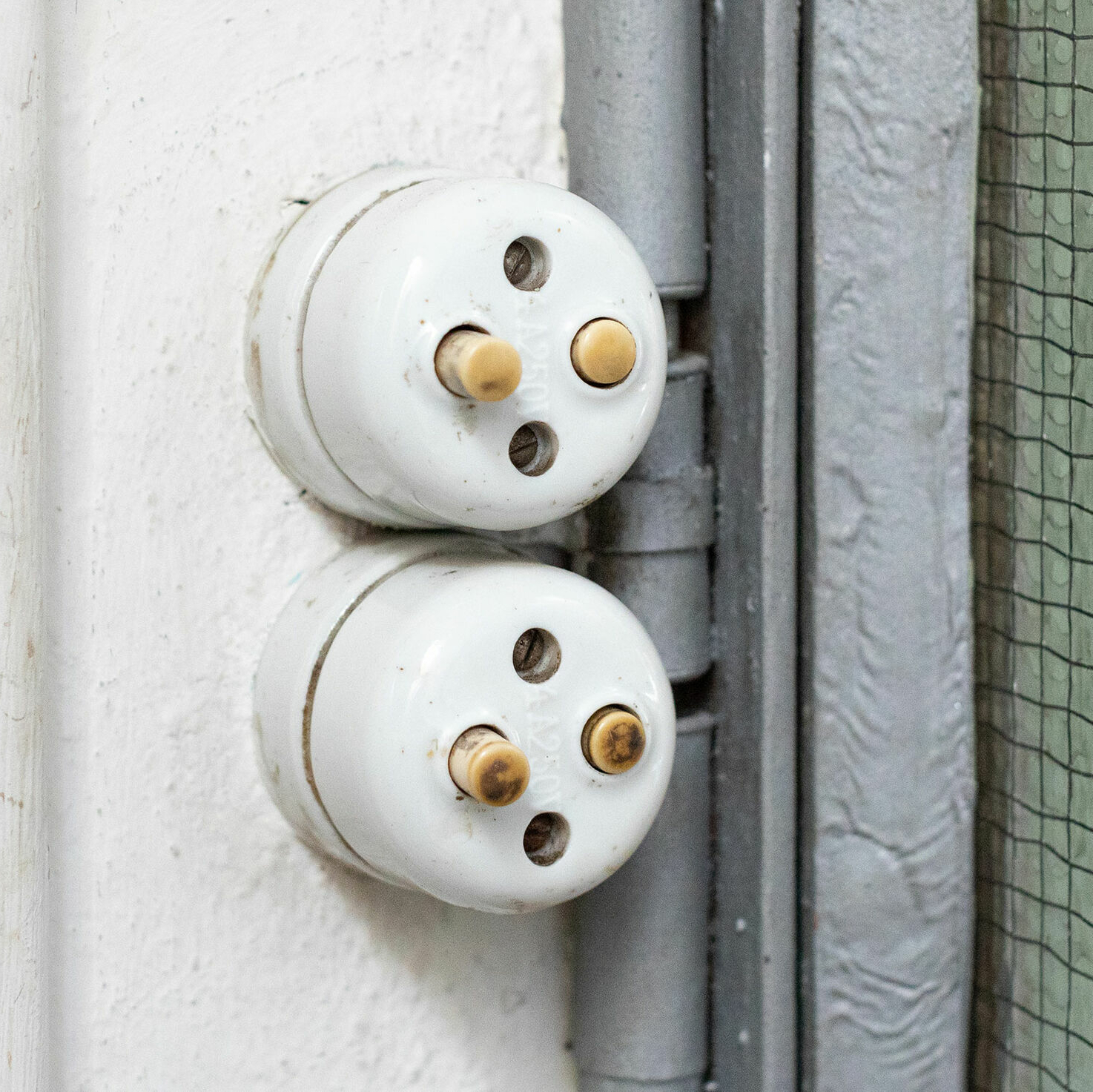 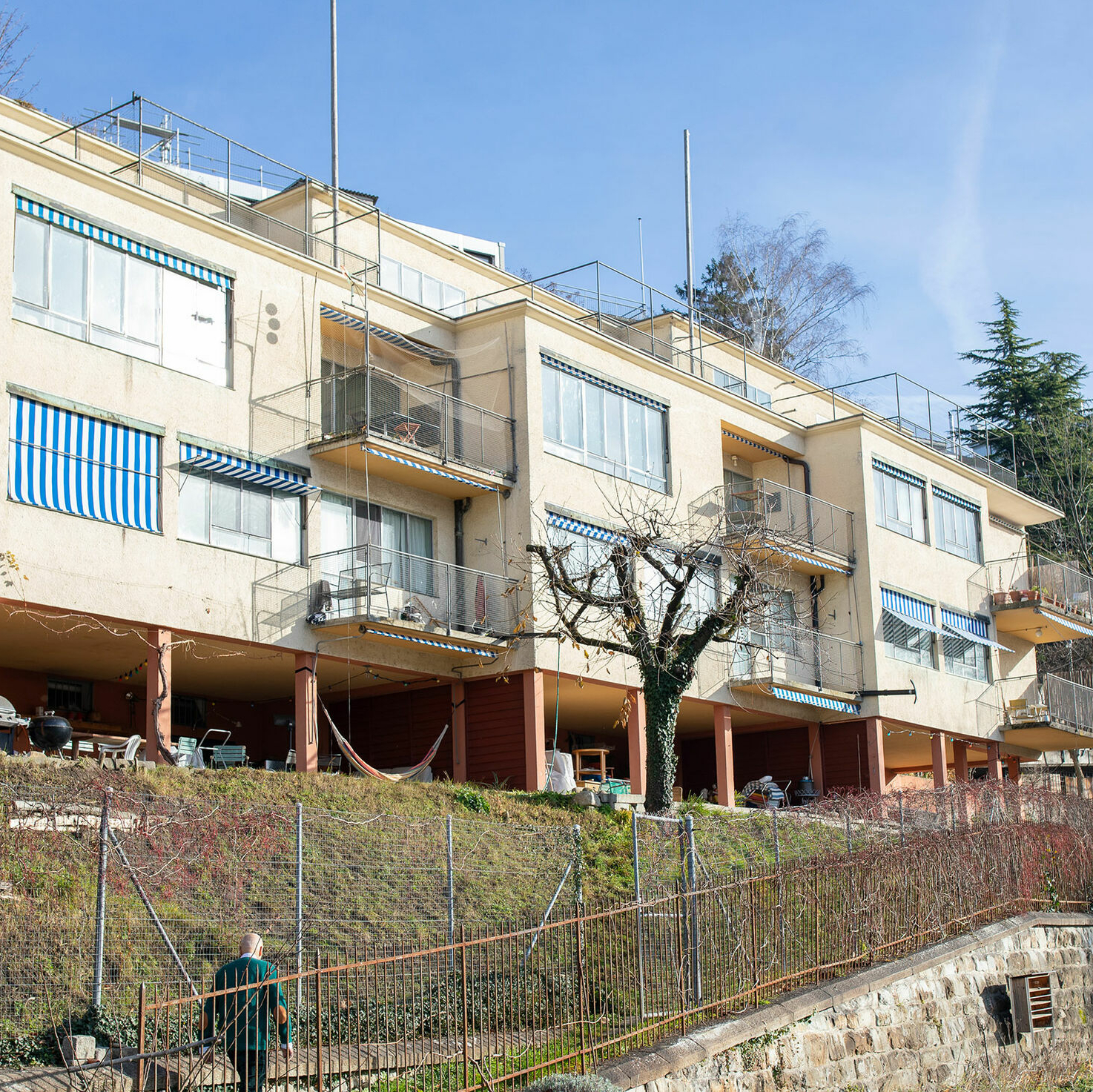 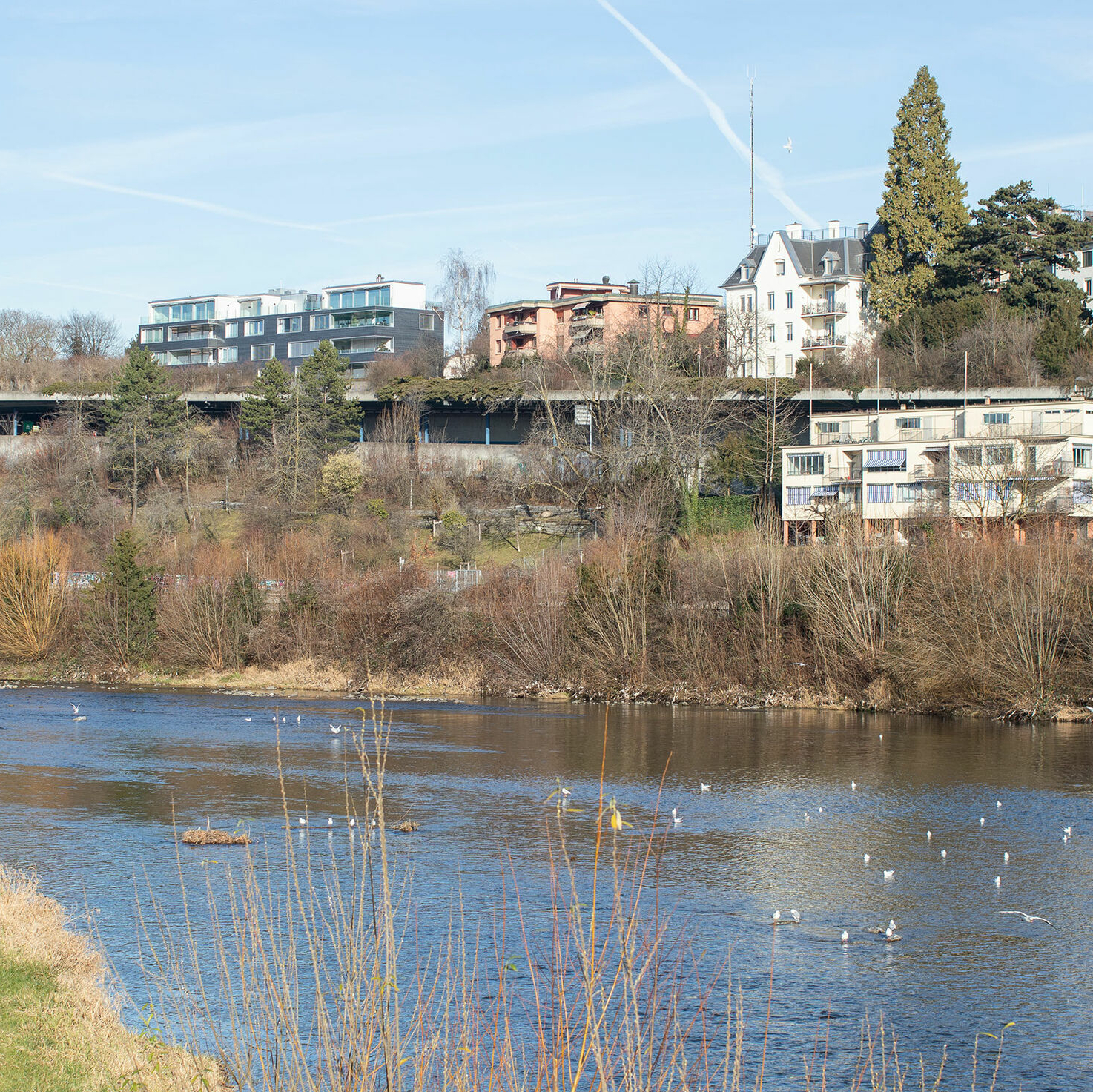 Ruggero Tropeano moved into the Rotach complex on the Limmat in the late 1980s, when he would regularly have to report drug dealers and dead bodies to the police. But today the architect thinks it’s a fantastic place to live.

‘Oh look, an open house!’ says a passer-by to his companion. But on this Saturday in September, people aren’t queuing for an hour to look around a vacant apartment in the Rotach complex. This time, for a few minutes at least, they can find out how it feels to live the retro dream in one of these historic Zurich buildings – and look over the Limmat from the huge windows.

The Rotach housing complex in Zurich was designed in 1928.

This was all thanks to the Open House Day organised by Ruggero Tropeano. The architect, lecturer and author moved into the complex in the late 1980s. At first, he and his family lived in one of its two 6-room houses. Nowadays he uses one of the smaller apartments as an office and occasional place to sleep, and this is what he opened up to the public. His main home is a house in Meilen. ‘It’s from the same period,’ he says.

Today the Rotach complex is listed as a historical site.

The Rotach housing complex in Zurich was designed in 1928 for the New Home II exhibition by Swiss architect Max Ernst Haefeli. The Tages-Anzeiger newspaper recently described him as ‘A man who is one of the city’s architectural icons.’ His architectural firm Haefeli Moser Steiger designed many of Zurich’s buildings, including the Allenmoos outdoor swimming pool, the Convention Centre, and today’s University Hospital. He was still in his twenties when he designed the Rotach complex in the Neues Bauen (New Objectivity) style in line with his credo of ‘light, air, sun’.

Today, Ruggero still thinks the buildings are ‘fantastic’, adding that it’s something of a miracle they are still standing. Some decades ago, the complex was threatened with demolition to make way for a new motorway, but the Swiss Werkbund campaigned successfully to prevent it. Even before this, the Rotach cooperative that owned the complex had avoided carrying out any large-scale maintenance work – pouring money into the buildings seemed too risky in the late eighties. Looking back, Ruggero says that was actually a good thing: ‘A lot of the original features have been preserved.’

In 1988, Ruggero, his wife and a colleague at the cooperative bought the complex, and their sensitive renovation work was recognised with an architectural prize. Ruggero says there was no need to give it a major overhaul: ‘It already had everything we needed’ – from the laundry room on the top floor to the extractor fan in the kitchen, which Ruggiero says worked perfectly for decades. He also loved the stairwell: ‘It was big enough to house my lemon trees in winter.’

‘It already had everything we needed.’

The building was everything Ruggero wanted. But its surroundings? ‘It was like being under siege,’ he recalls. In the late 1980s, Platzspitz park was a magnet for junkies and dealers. But the architect decided he and his family would not be driven out: ‘I refused to give up.’ He regularly called the police, attended meetings with the ombudsman for the canton of Zurich, and finally erected a wooden gate on the path that led to the building. ‘The police took it down straight away,’ he says. But just a few days later, two people were found dead in the garden. ‘They weren’t addicts but probably dealers,’ says Ruggero. He reported it to the police and erected another gate – a metal one this time, blocking the entrance. ‘Then peace returned,’ he says.

The new section of the Rotach complex also has a new address. It used to be on Wasserwerkstrasse but is now on Lux Guyer Weg. Ruggero pushed for this change in honour of Lux Guyer, Switzerland’s first female architect. One of her projects, the women’s housing development, lies at the end of the path.

Today the Rotach complex is listed as a historical site. ‘Nothing can be changed,’ says Ruggero. Not even little things like power sockets. ‘Nearly everything is original in my apartment,’ he says. He just had to replace the sink in the kitchen, and the old one is now on display at the Museum für Gestaltung. In fact, Ruggero donated most of his old furniture to the design museum: ‘I wanted it to stay together.’ Giving it to the museum seemed the best way of achieving this.

Ruggero says his retro apartment never feels like a museum.

Despite this, his current apartment still houses some select pieces. ‘In the past, I often used to pick things up off the street when people put them out for the bulky waste collection,’ Ruggero recalls. Nobody used the word vintage back then. ‘But I had a good eye for it.’ He grew up in Italy, where he was surrounded by good design: ‘That’s what shaped me.’ He bought some of his things at a second-hand store and snapped up a few bargains from the ETH when it sold off its old furniture. ‘I only paid ten or fifteen francs for the chairs.’ Another stroke of luck relates to the original sliding doors that have been reinstalled in the Rotach complex: ‘We found them in Platzspitz park.’ Drug dealers had removed them from the verandas and were using them as tables to sell their wares.

But Ruggero says his retro apartment never feels like a museum: ‘Everything is still in working order.’ He also doesn’t worry about damage: ‘You can repair most things, and you can look after them.’ The only chair that bears a protective cushion is his Haefeli chair, which was shown at the Weissenhof home exhibition in Stuttgart in 1927.