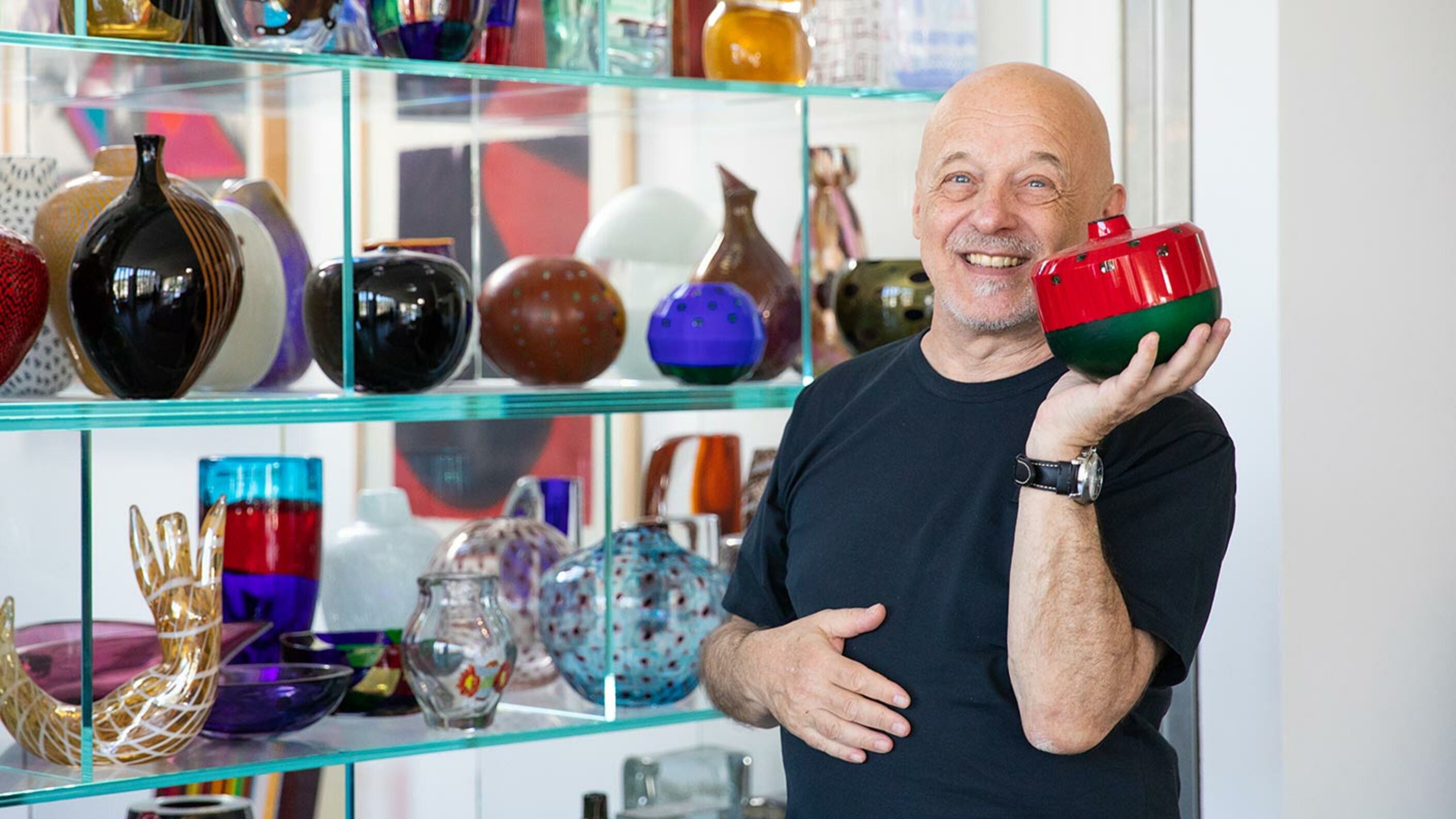 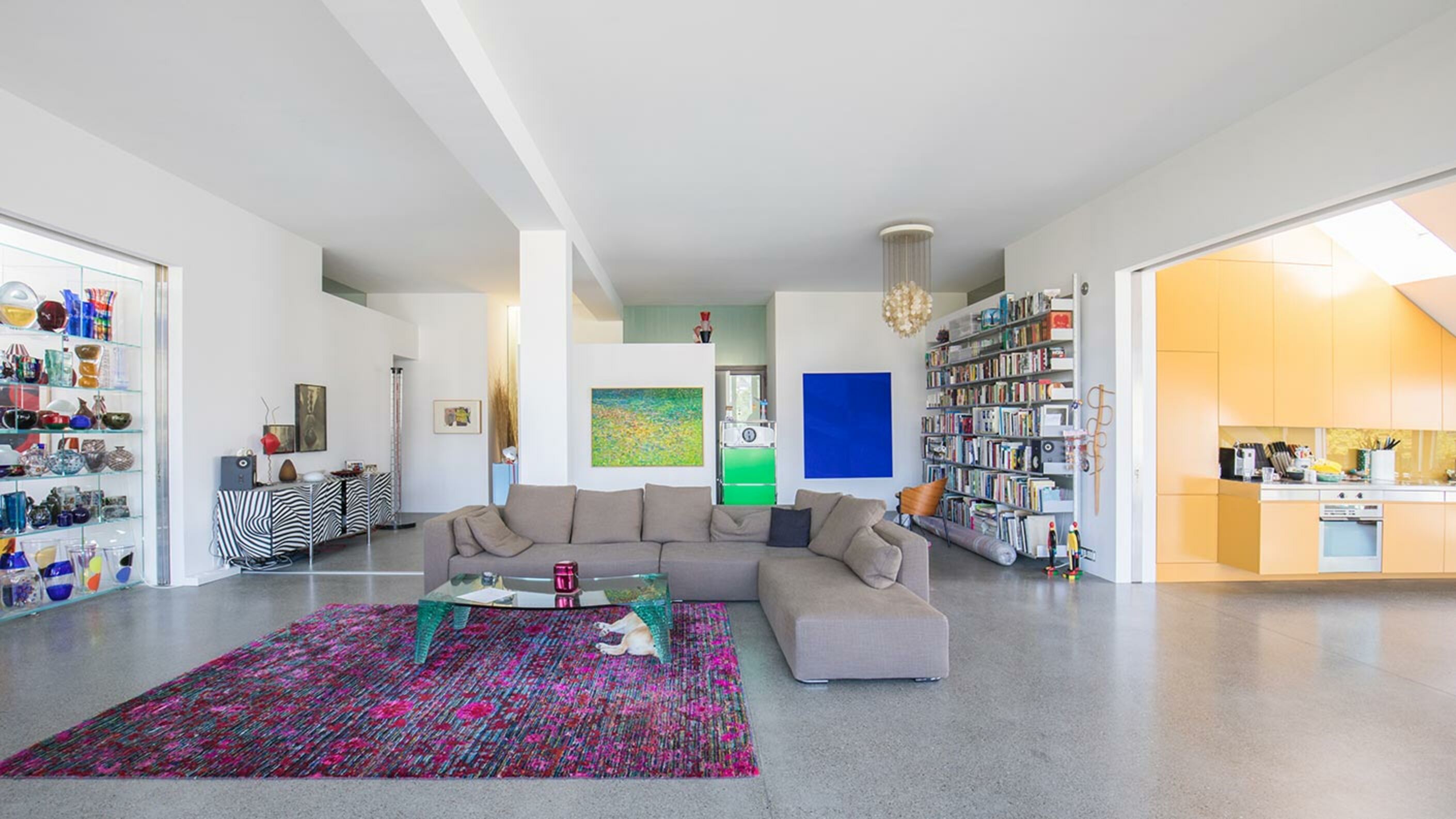 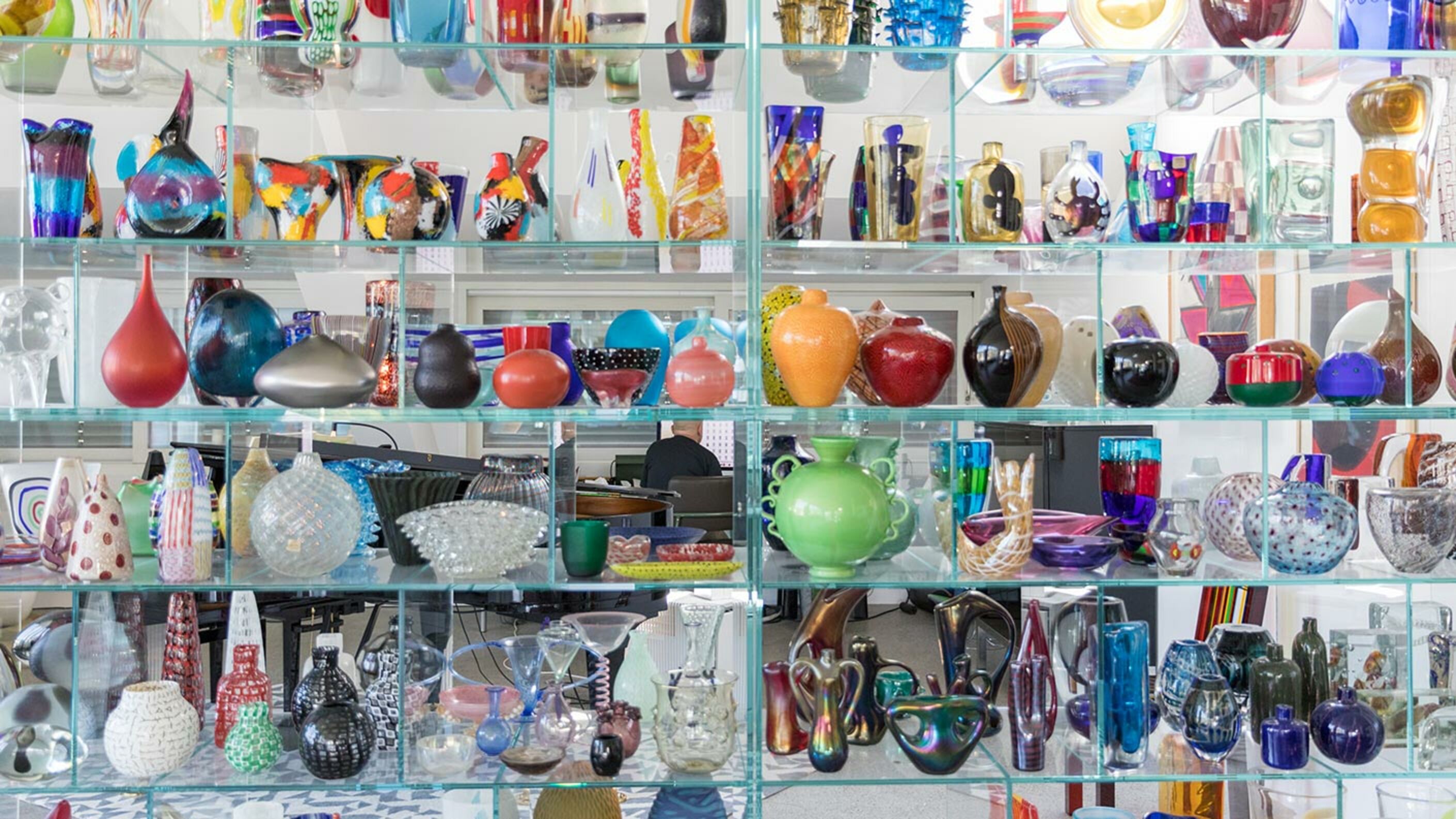 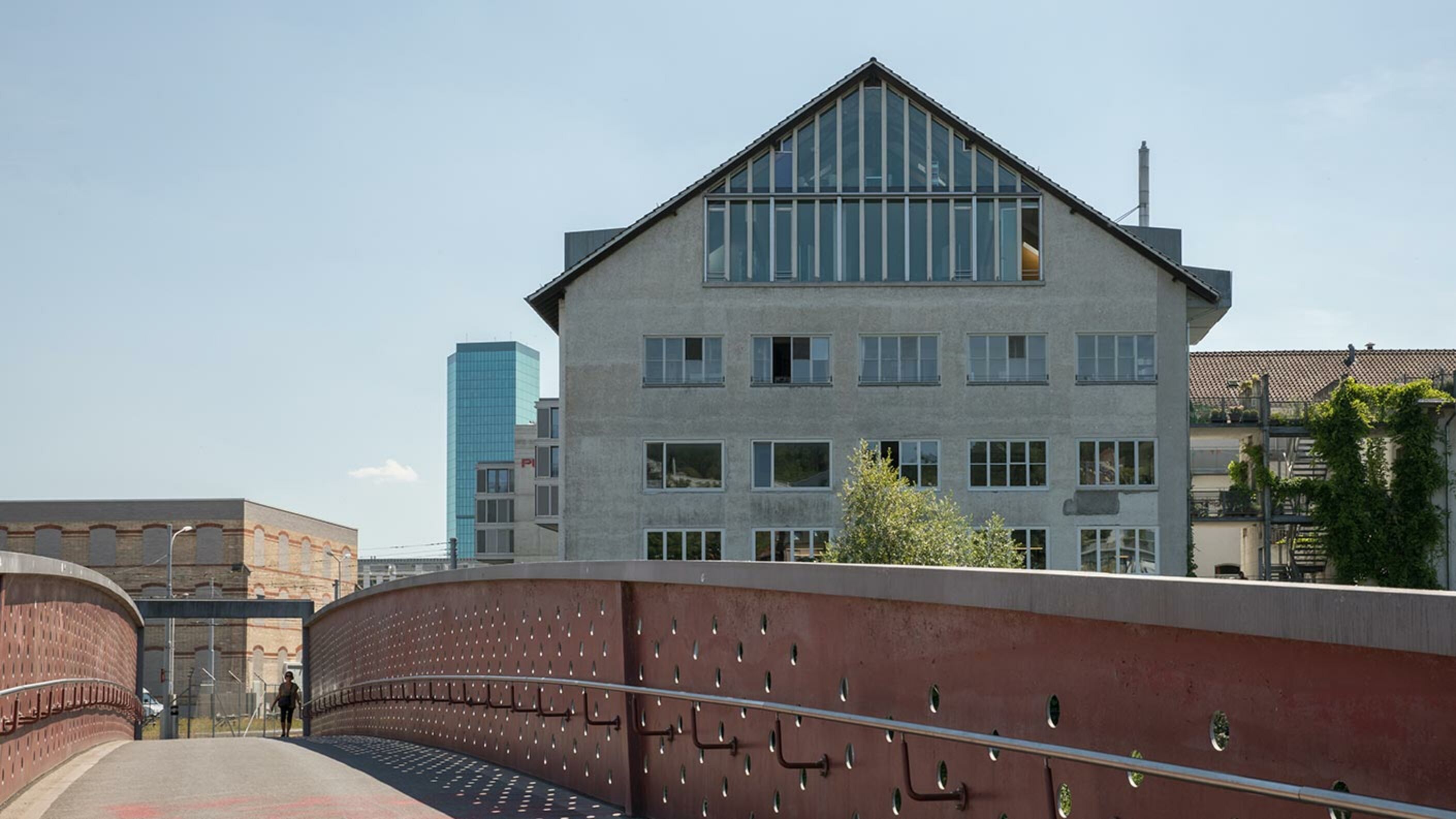 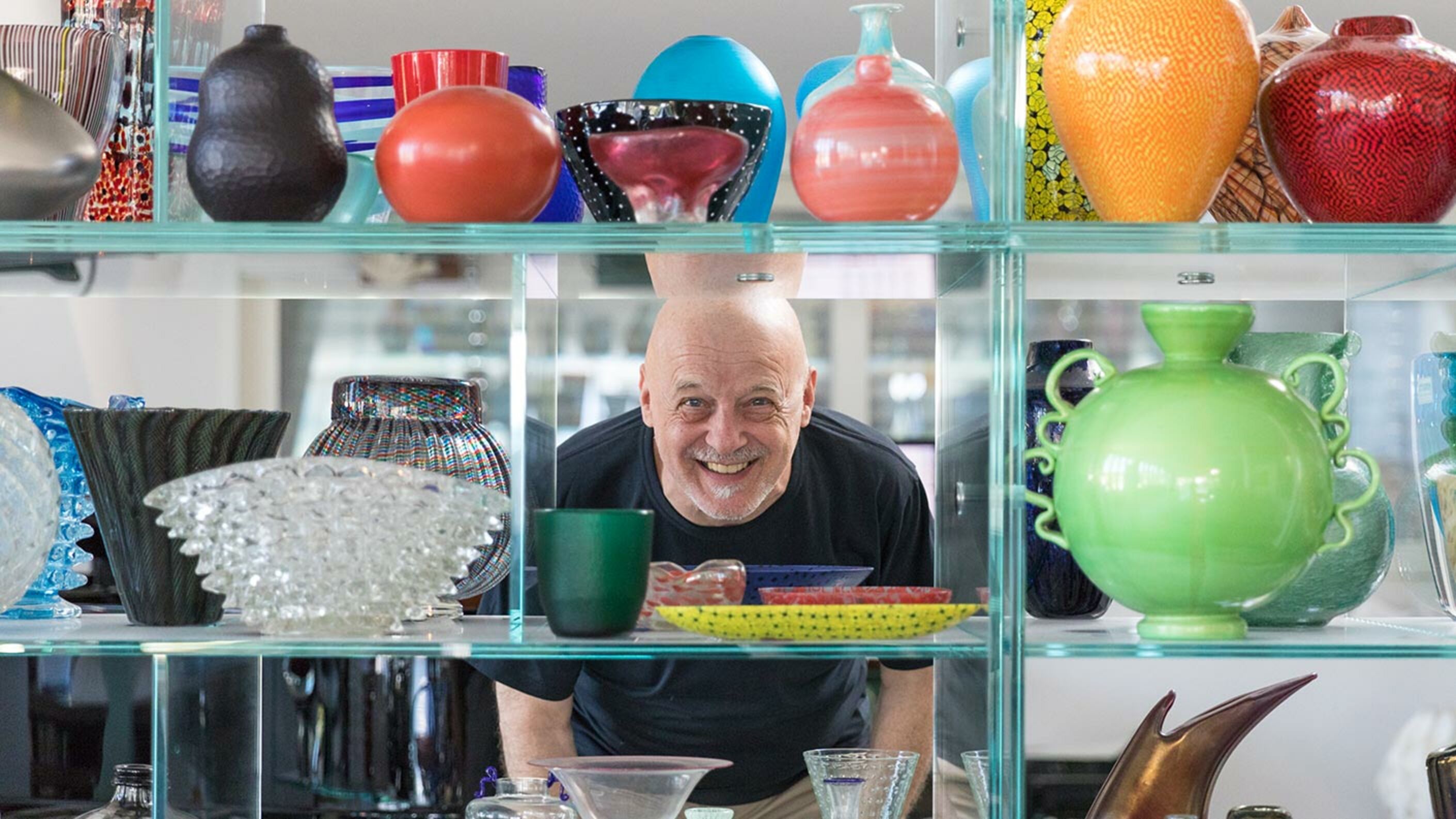 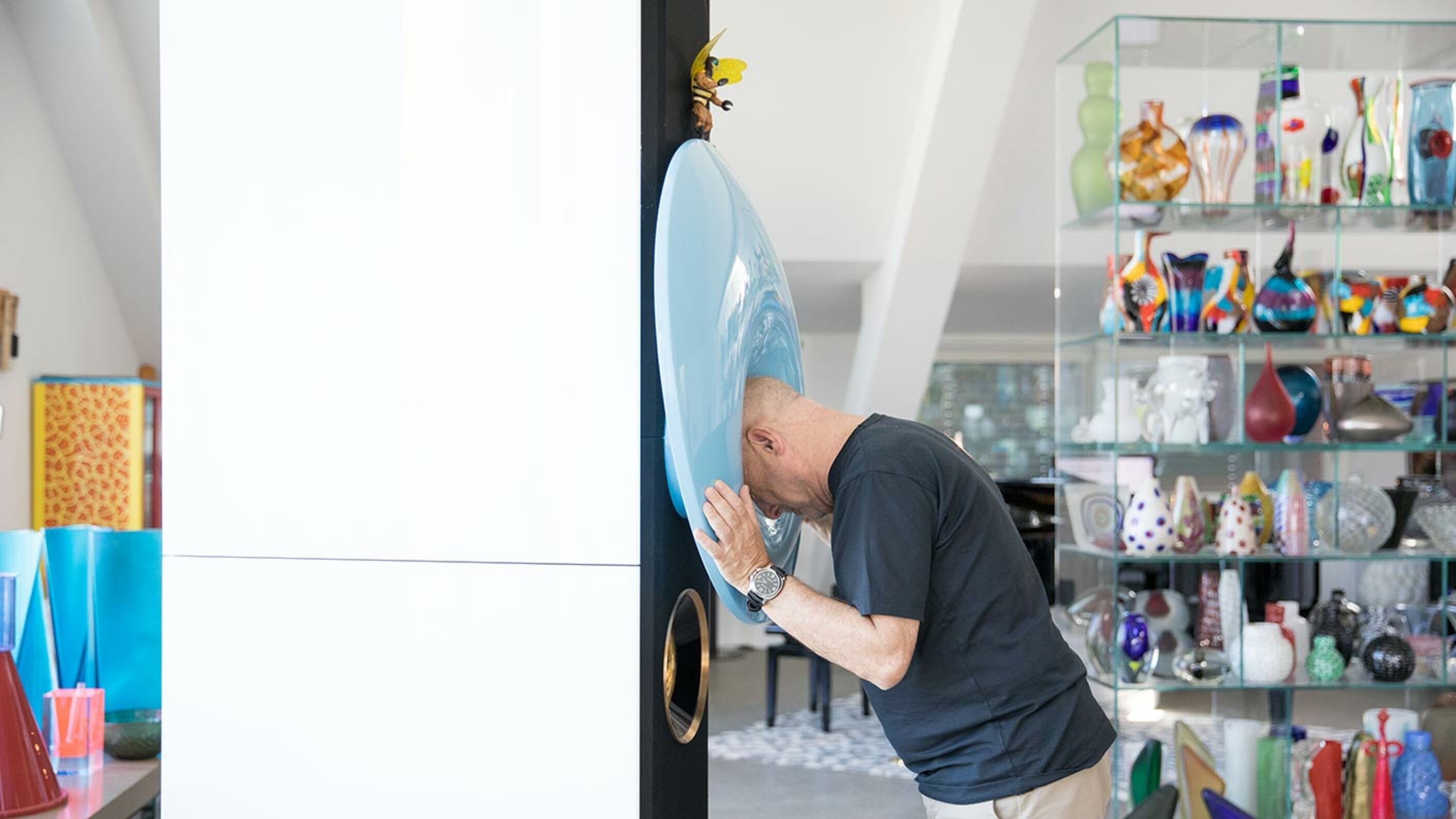 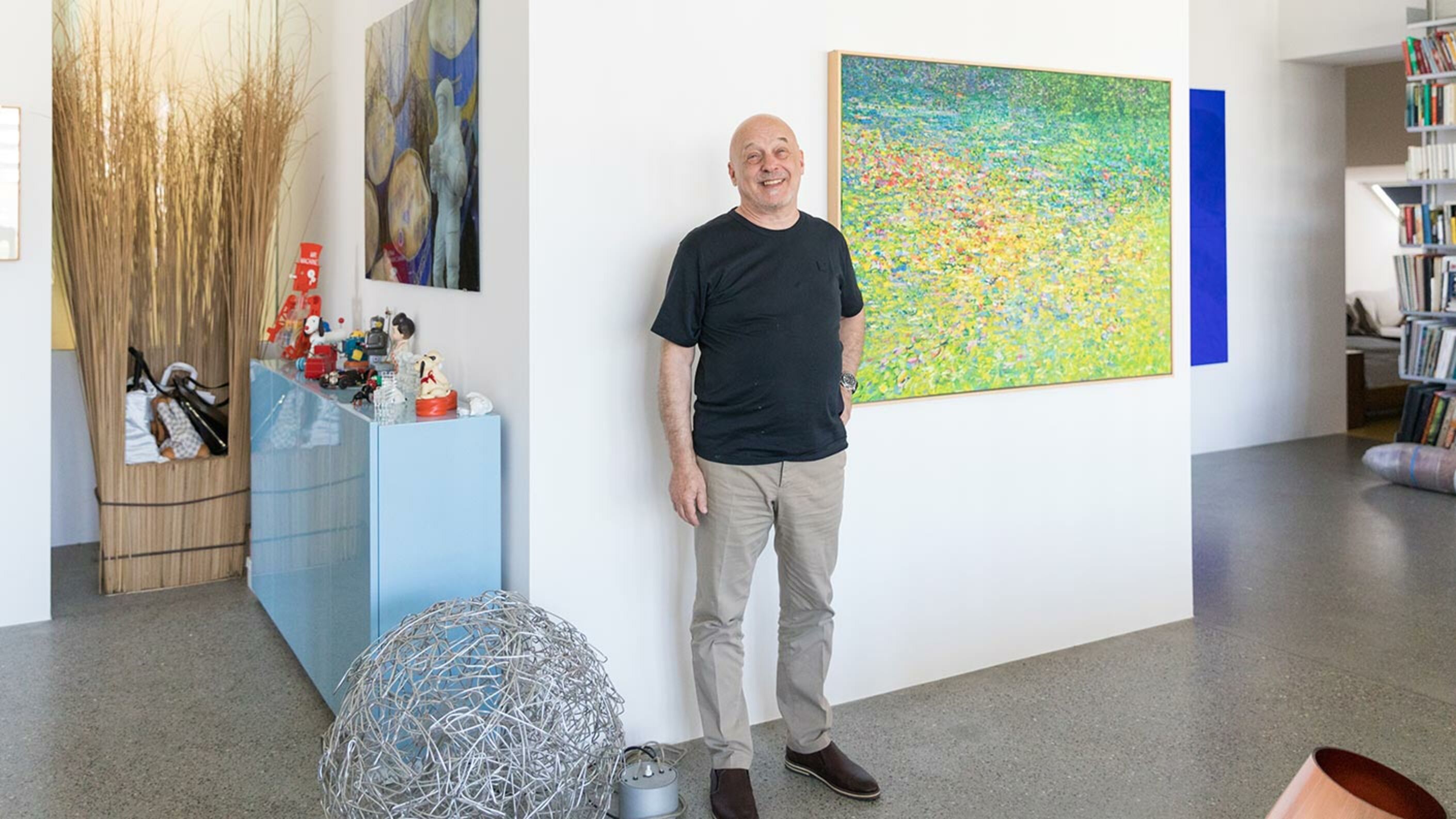 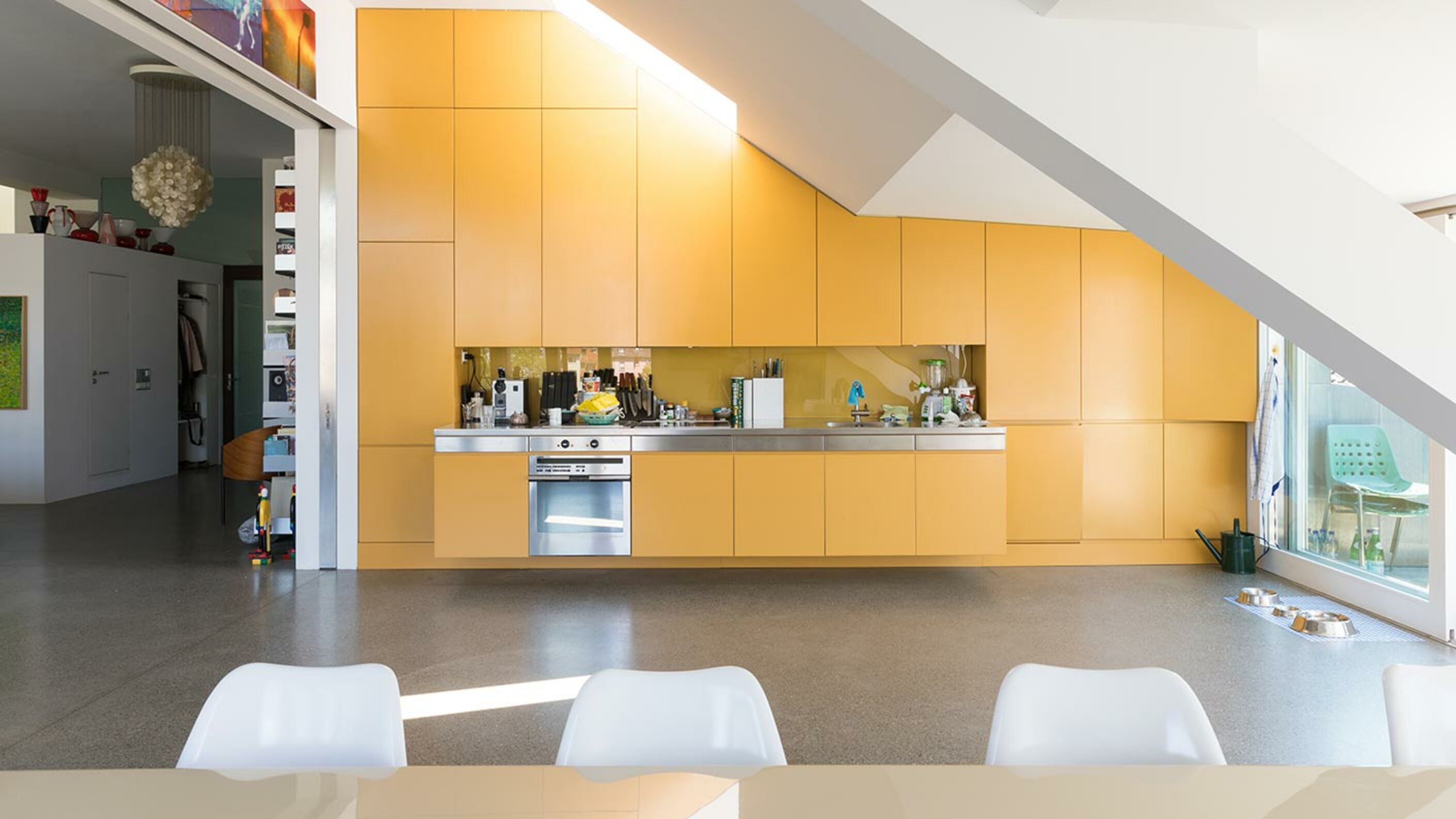 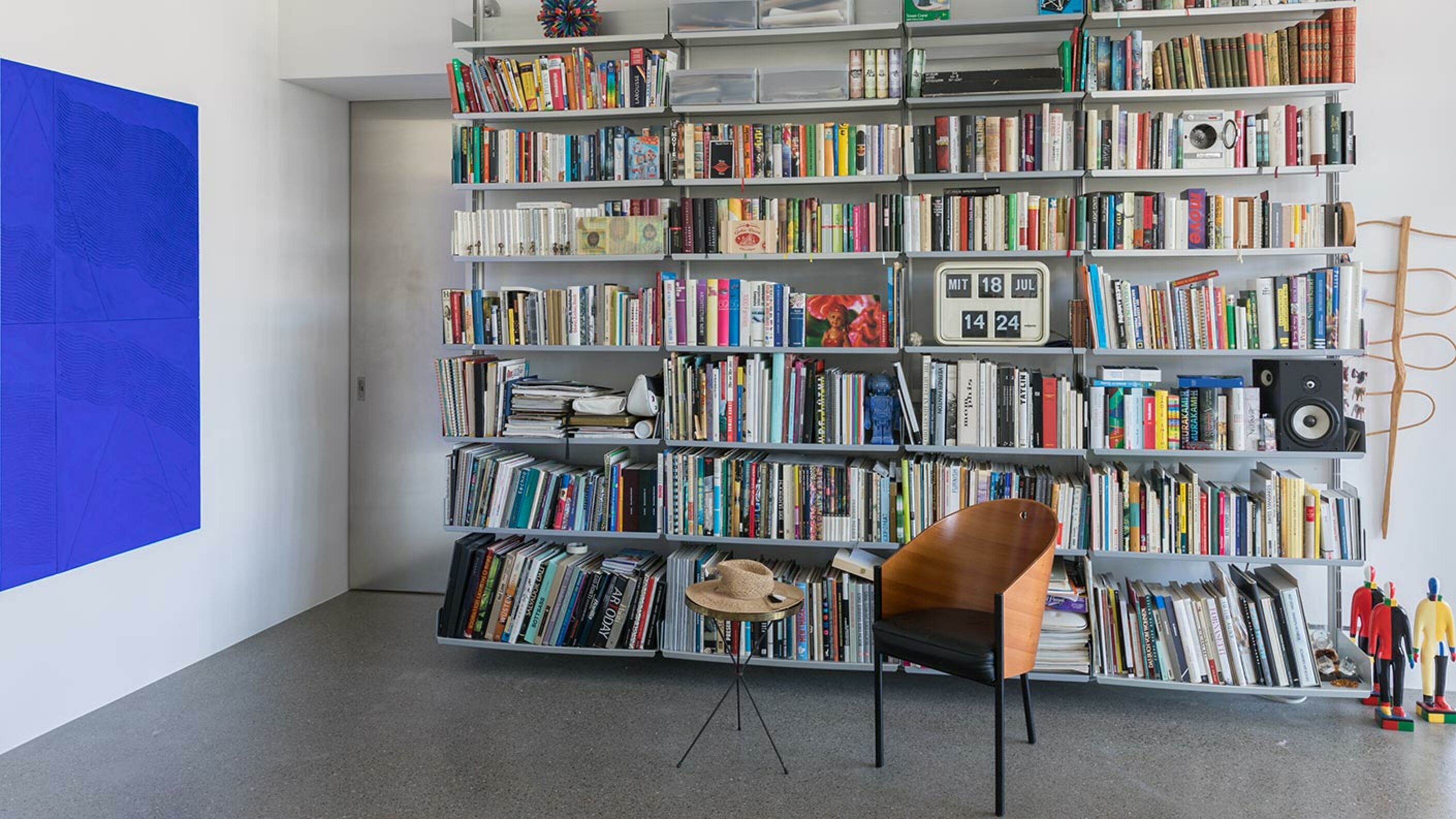 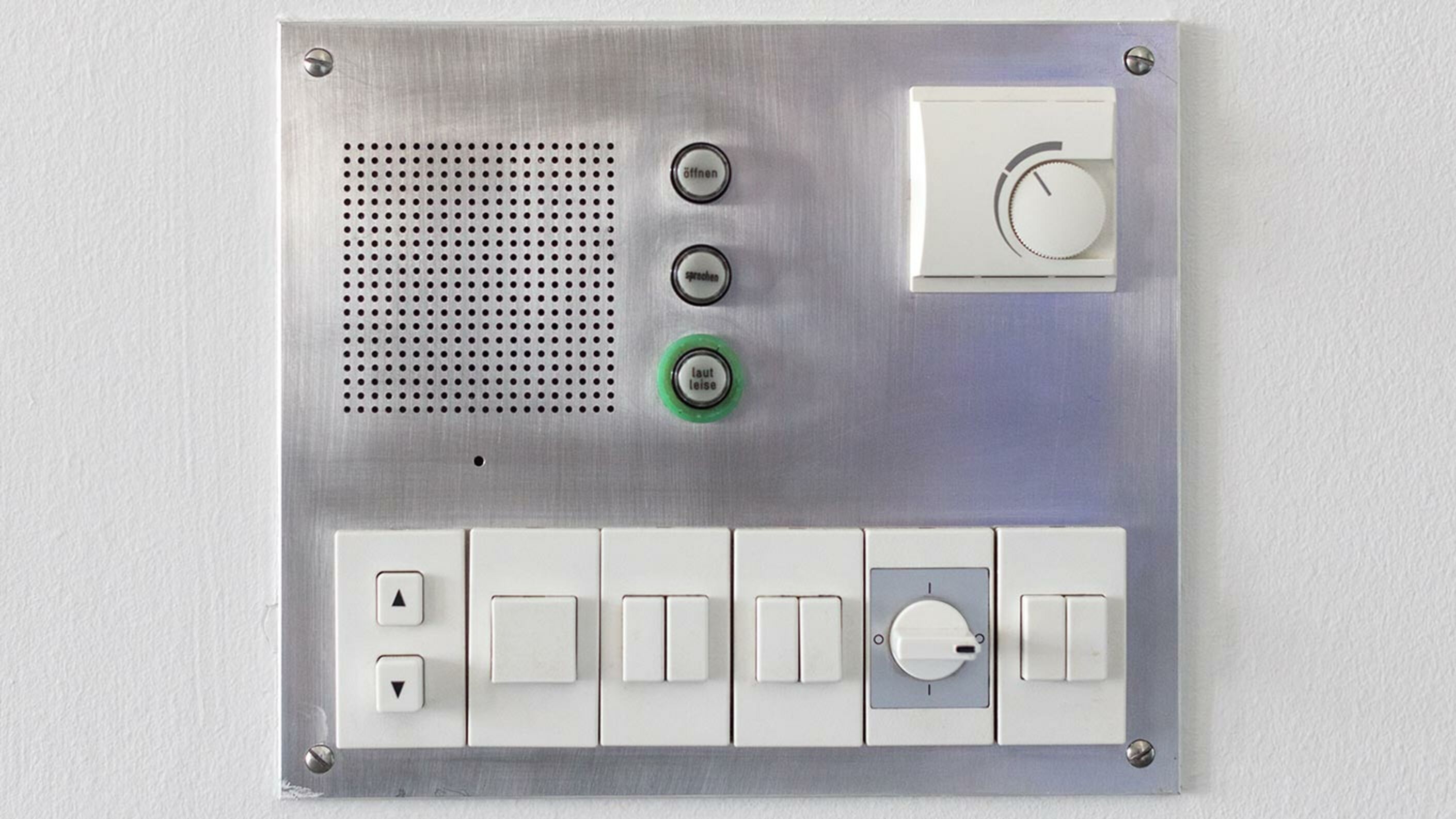 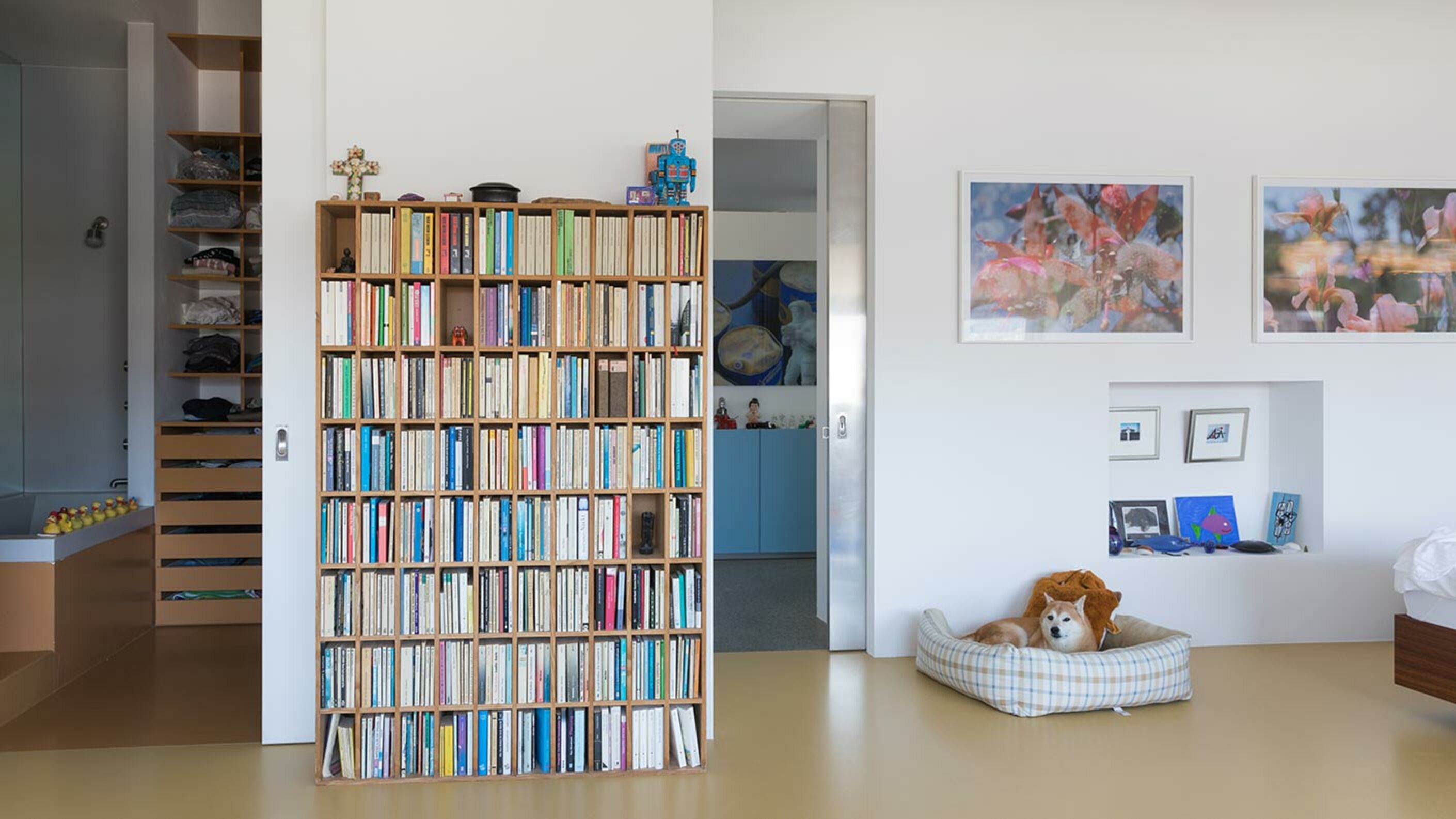 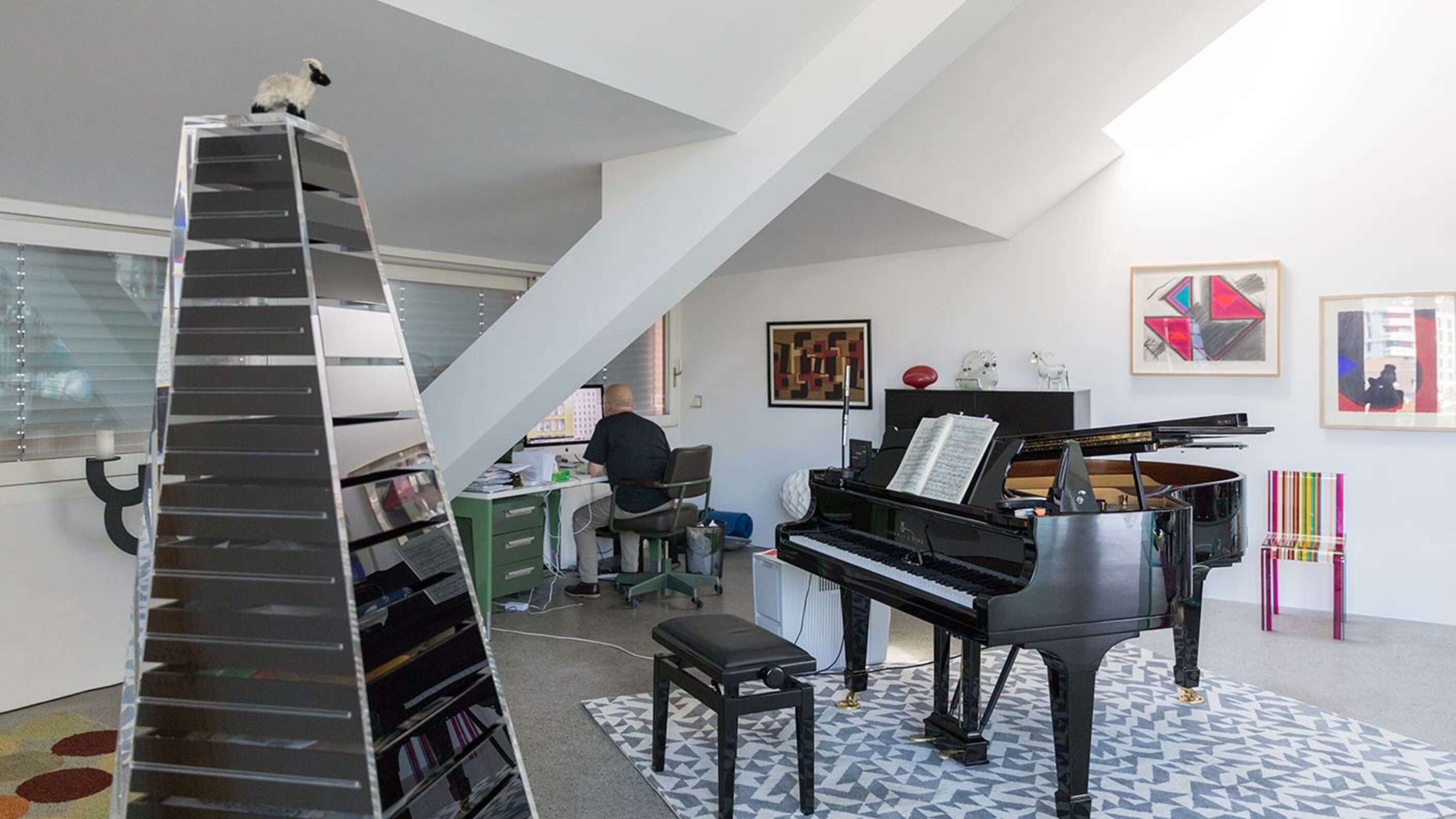 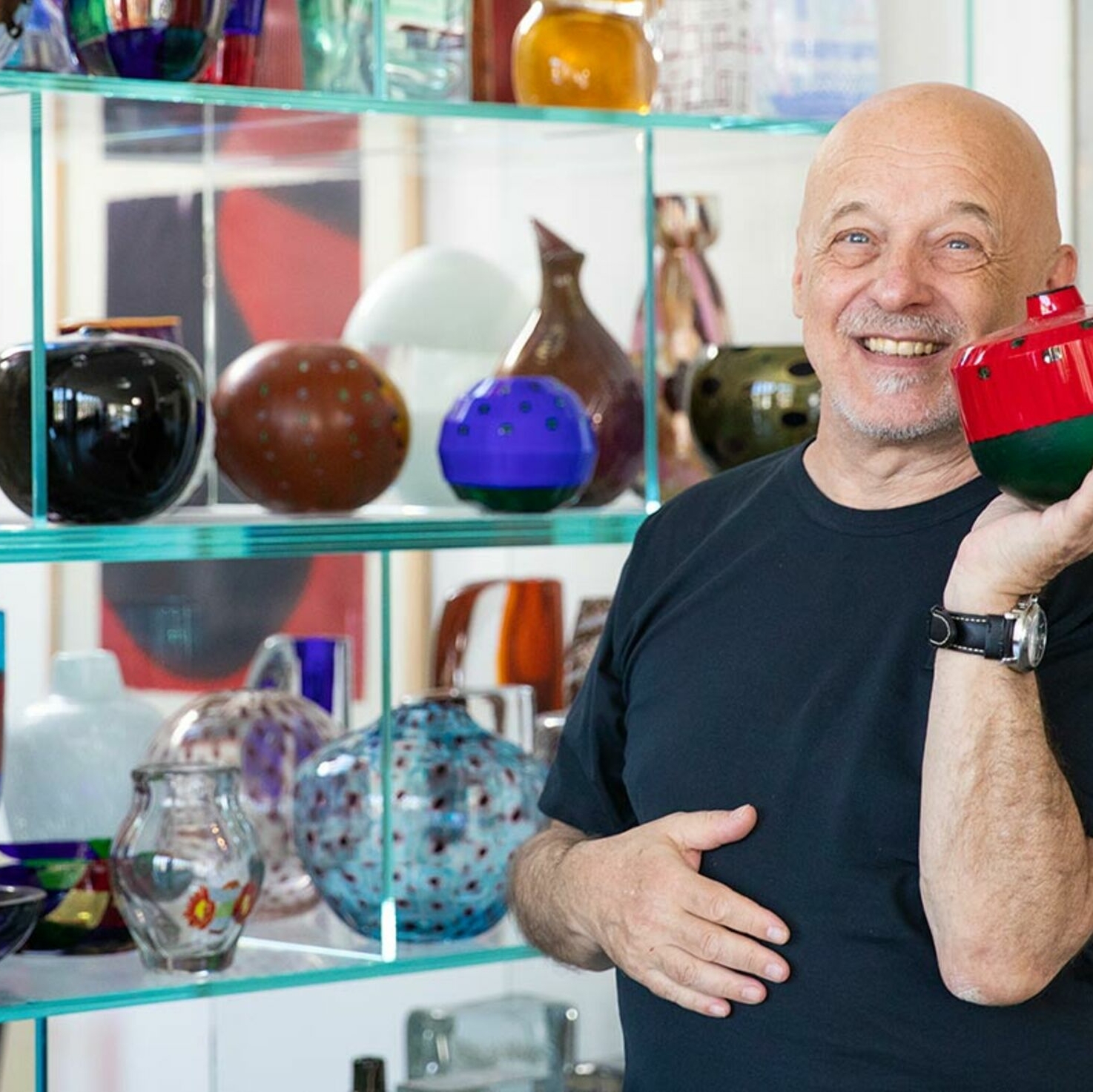 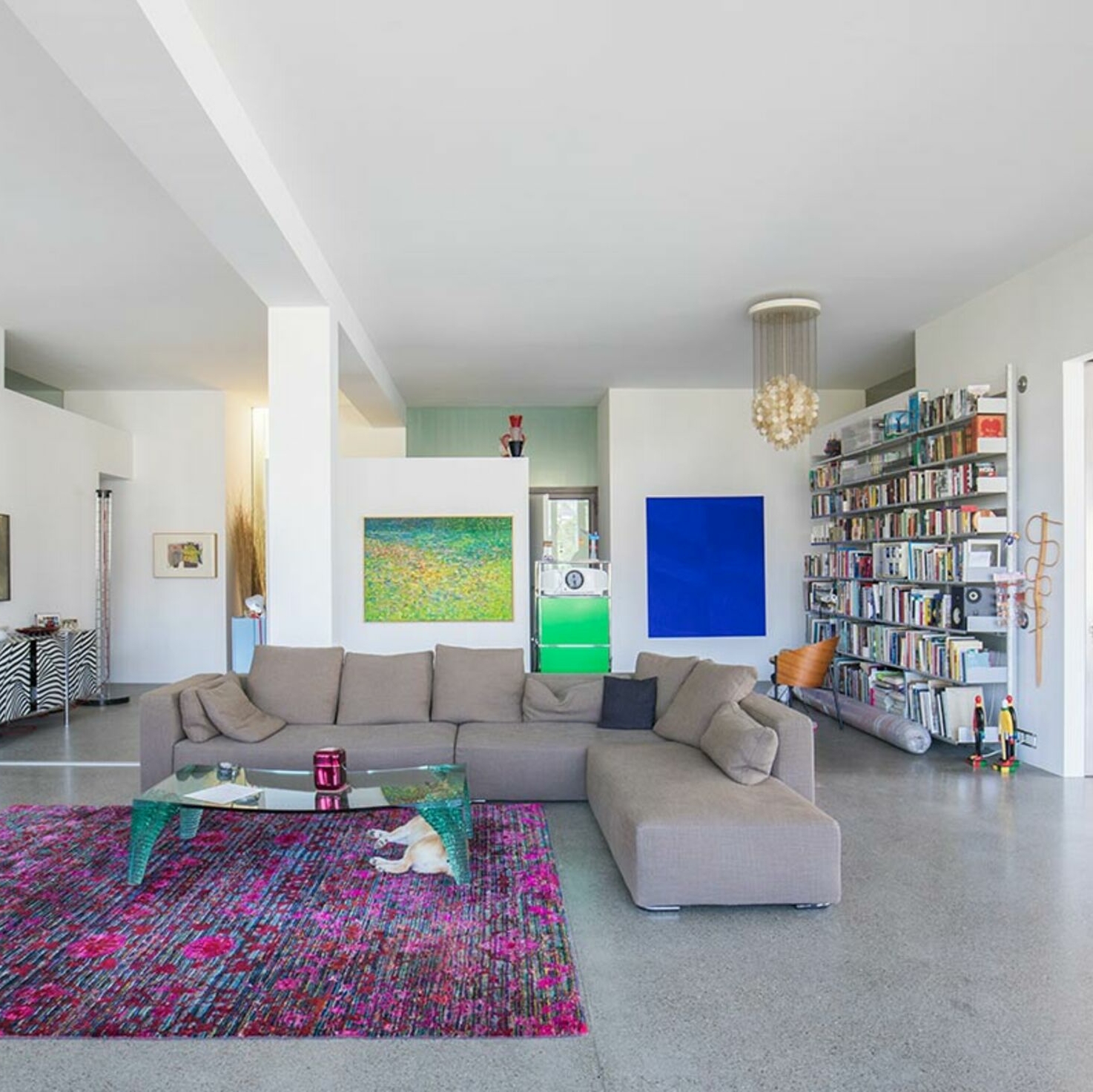 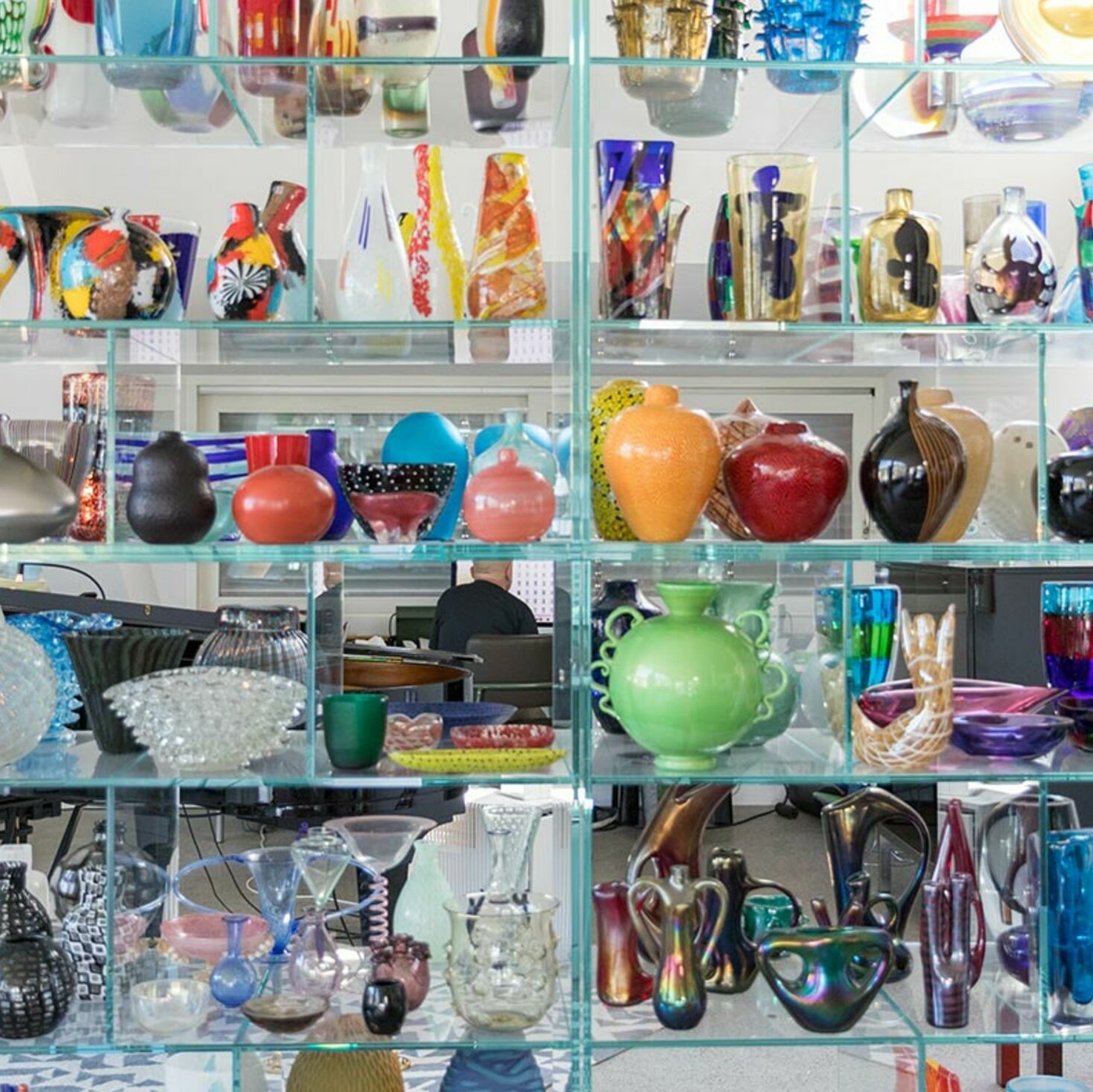 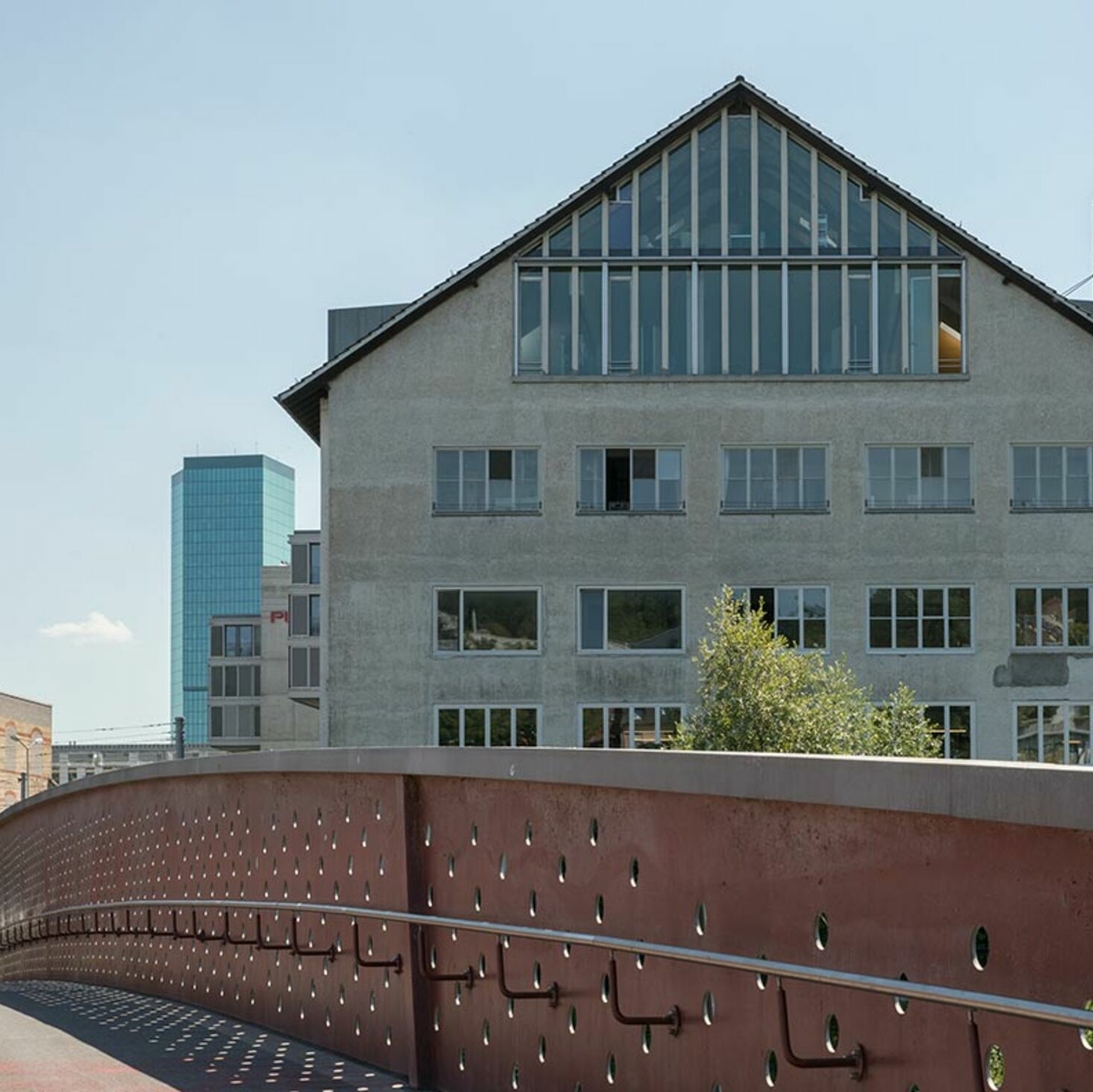 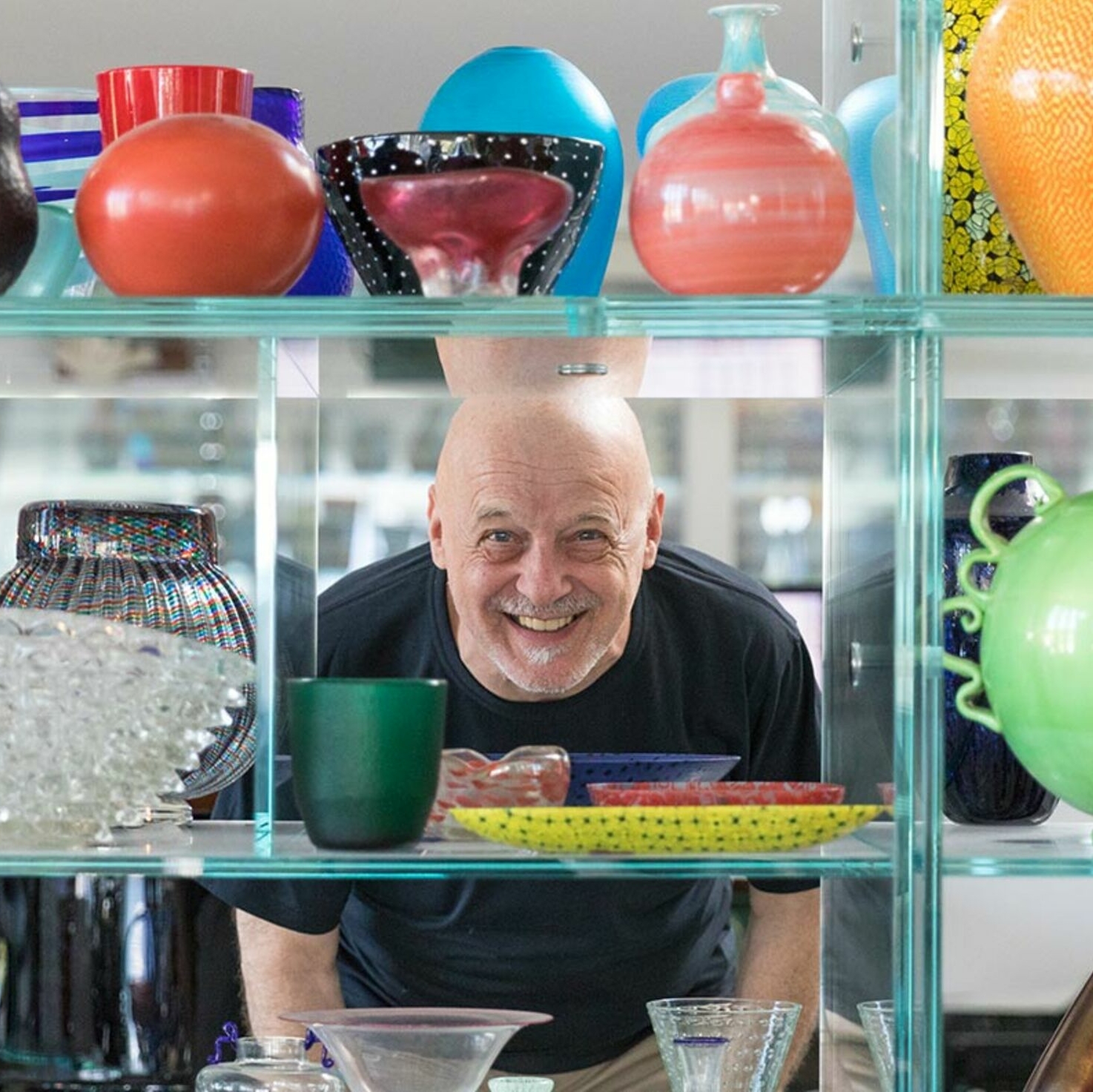 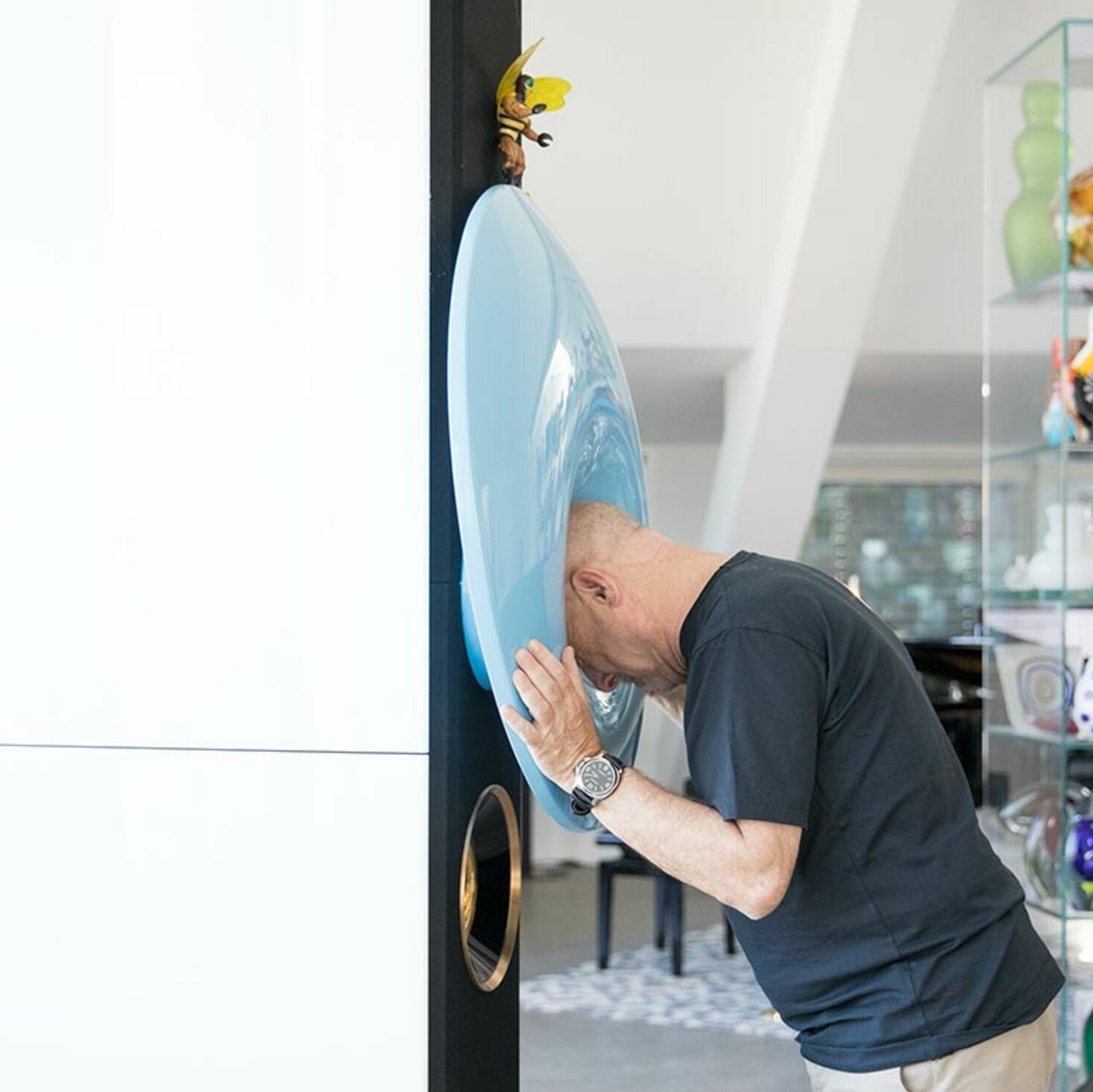 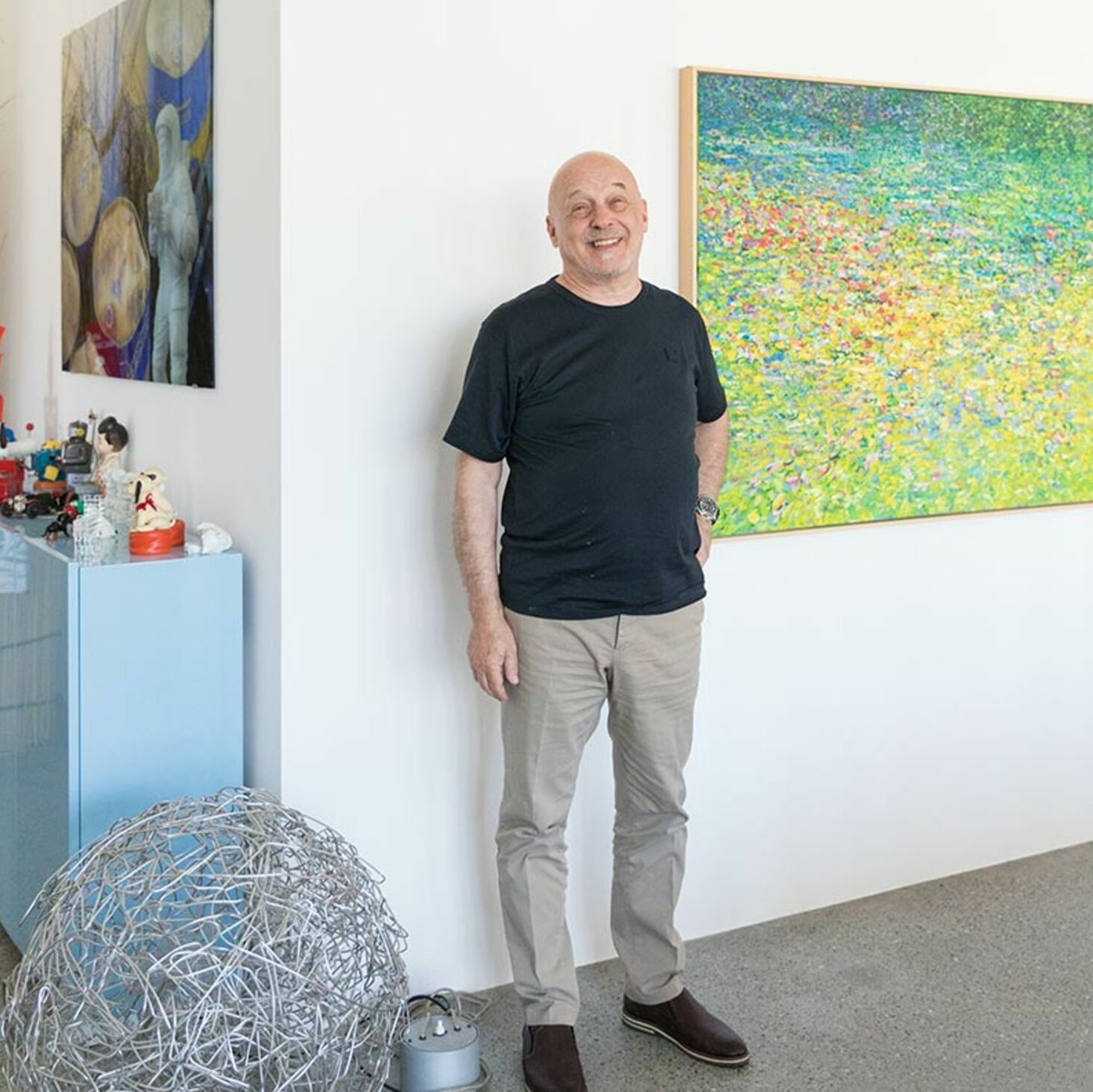 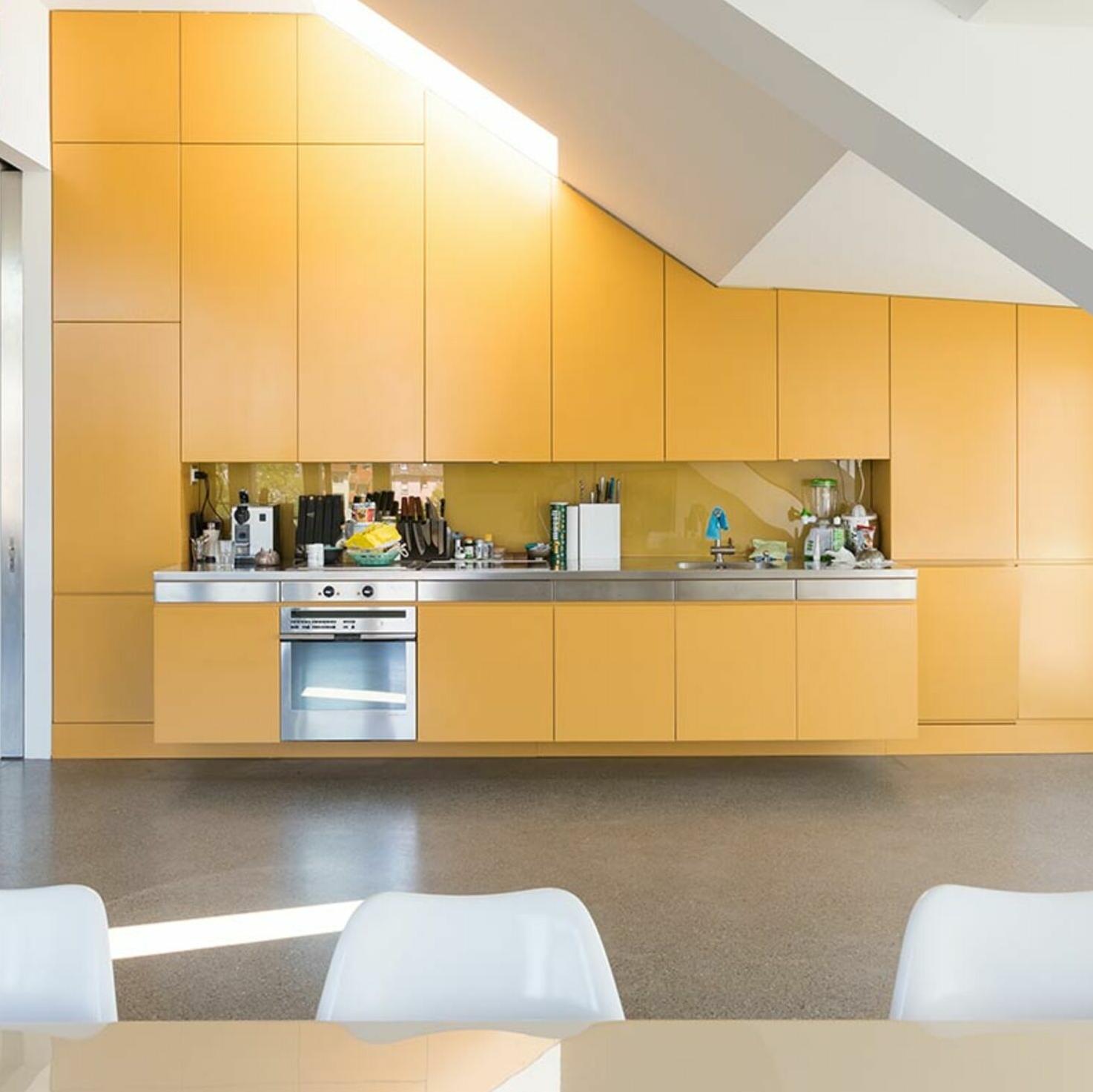 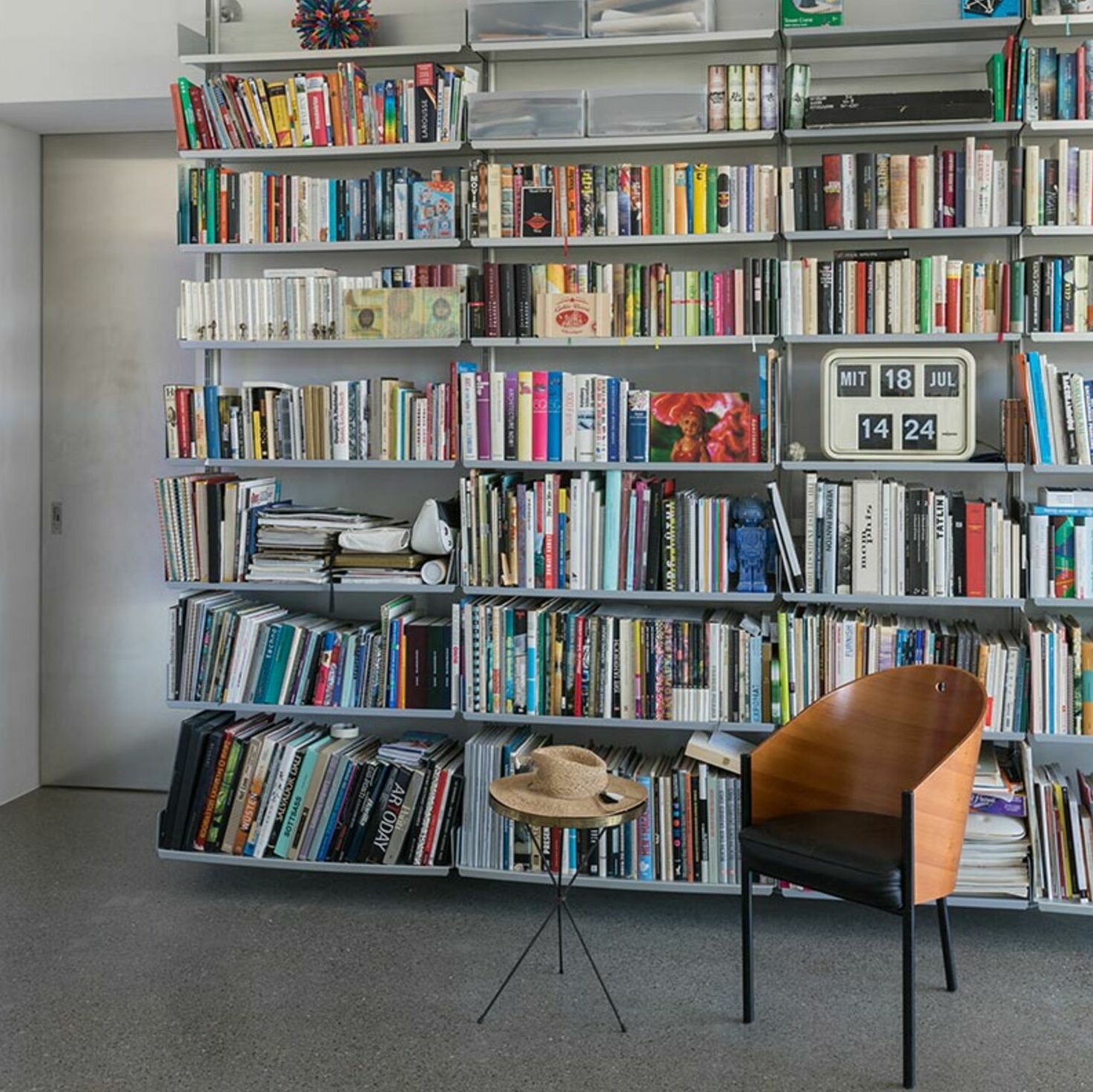 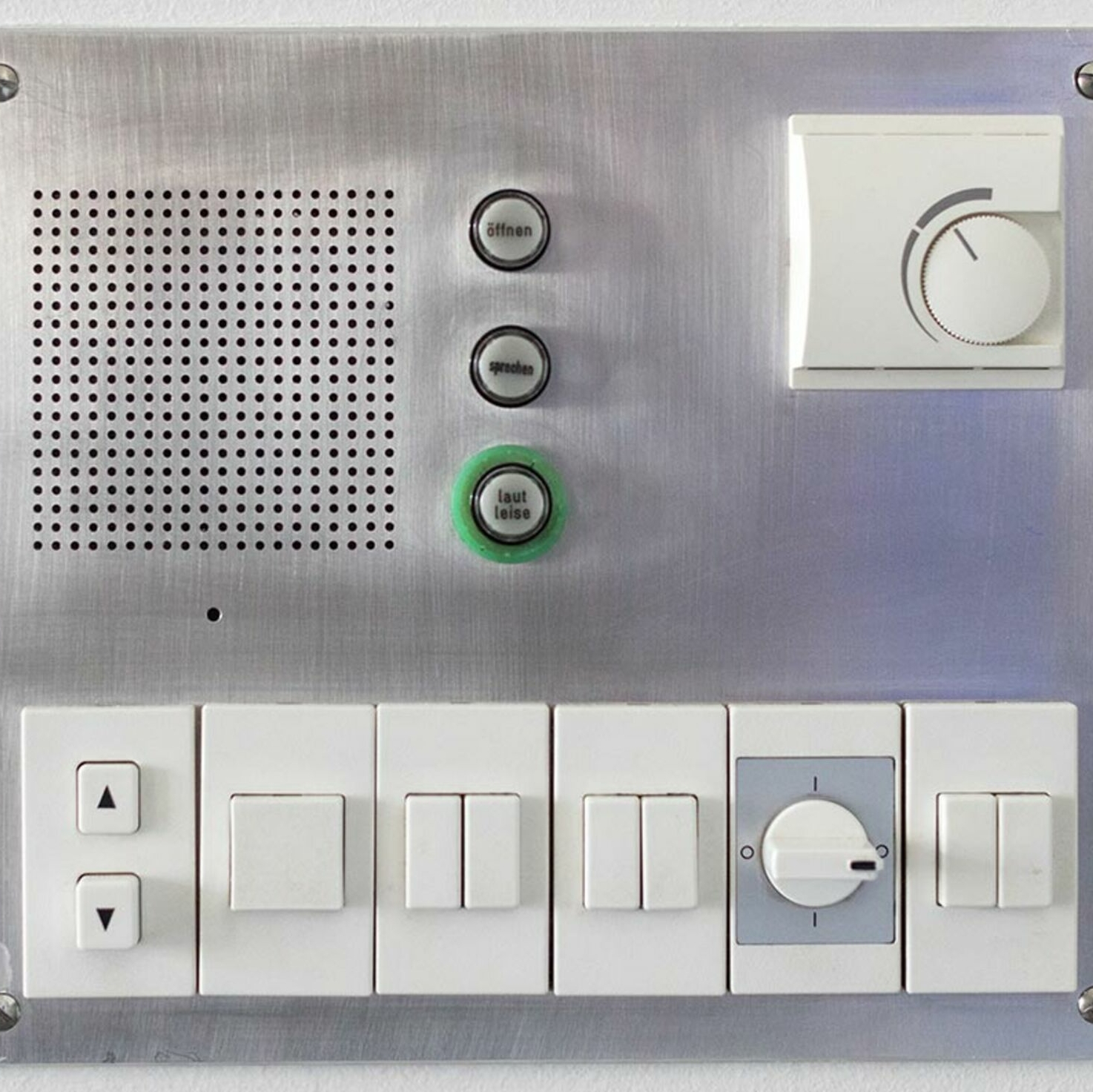 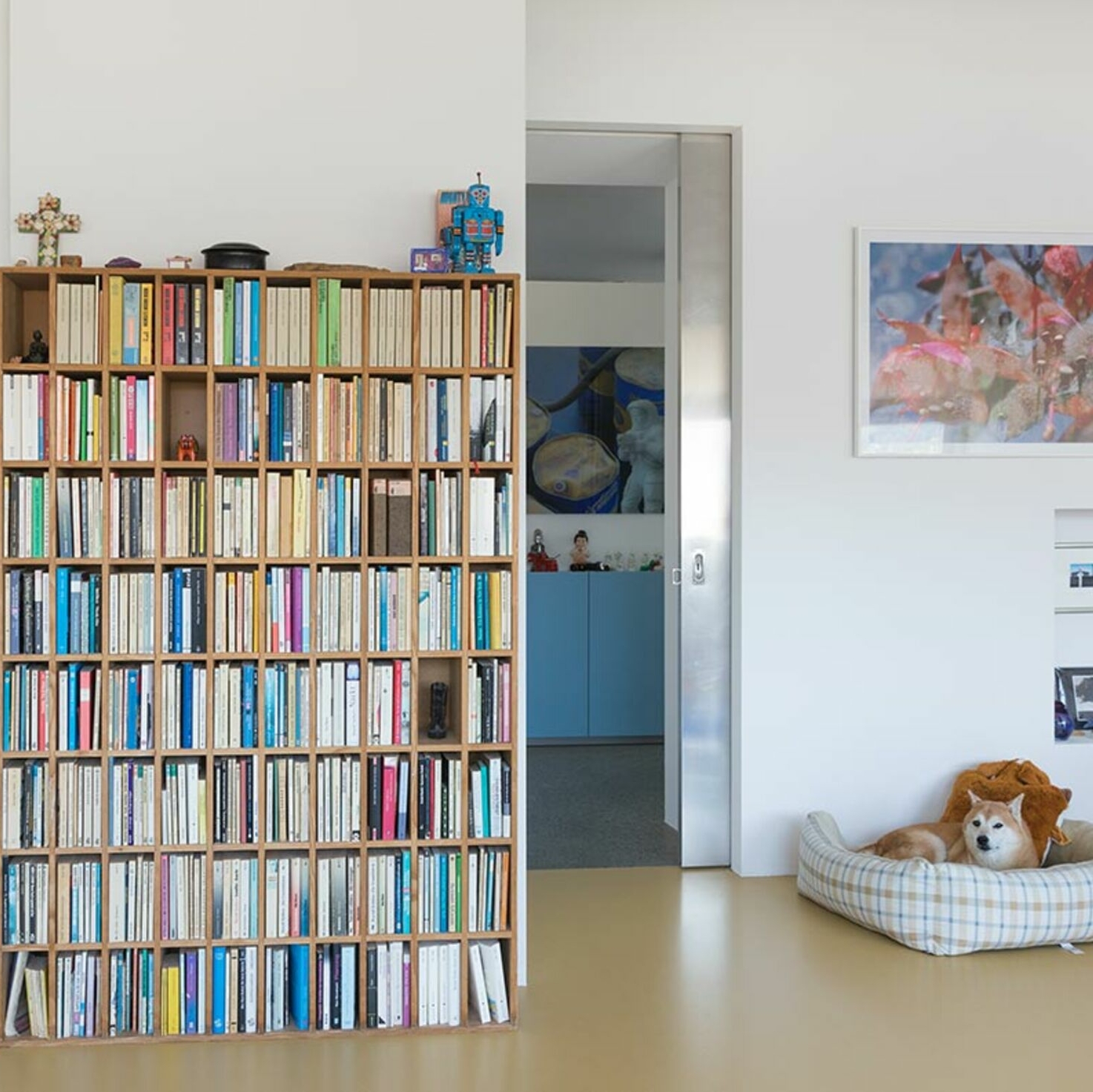 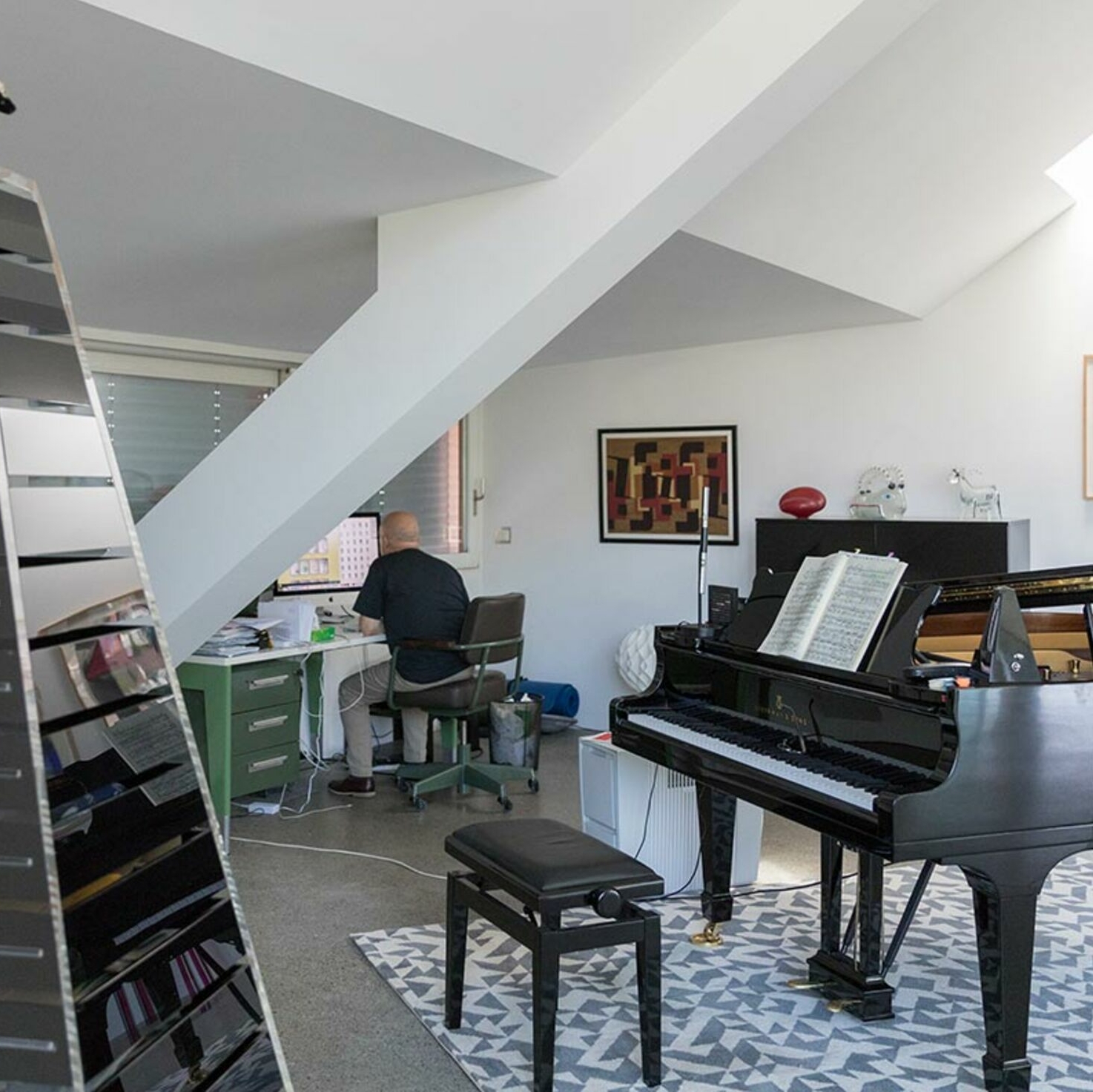 Peter Grünbaum wanted a home that he could never be thrown out of. He found it near the Hardbrücke – and fortunately it has lots of space, because Peter is a keen collector. He showed us around his home and his favourite pieces.

Peter Grünbaum says he never wanted to live in a typical family house. ‘I dreamt of a home in the city centre that no-one could ever throw me out of.’ So in the 1990s he and a few like-minded people set up a working group called ‘Living, Working and Leisure Under One Roof’. At that time, Zurich had even more empty residential and industrial buildings. Peter went to look at several, but most of them were not what he wanted. And if they were, he found the group wouldn’t support him. ‘At the end of the day, people weren’t prepared to spend their money.’

‘I dreamt of a home in the city centre that no-one could ever throw me out of.’

Then a friend told him about Steff Fischer. He had similar plans to Peter – and had already found a suitable building at Hardturmstrasse 66, ‘but the owner, Albert Hans, didn’t want to sell. Probably for sentimental reasons.’ It was the first office building occupied by this successful former porcelain dealer.

But, after more than a year, Albert Hans gave in. ‘Then things moved very quickly,’ says Peter. They set up a company called zürichparis AG – ‘We didn’t want a normal name like Immobilien Zürich West’ – and knocked on the banks’ doors to ask for the loans they needed. ‘But most of the banks turned us down.’ They weren’t impressed by the pair’s plans: ‘We wanted to create a mixed-use building in the heart of an industrial zone – one where we can work, live and die.’

Like the company’s other founders, Peter has a lifelong right of residence.

Today, the ground floor is home to a cafe and the Sphères bookshop, and WOZ editorial staff rent the upper floors. ‘Everyone here rents,’ says Peter. Like the company’s other founders, he has a lifelong right of residence. They all designed and built their apartments in the vacant building at their own expense.

‘No-one wanted the attic. I also had a horror of sloping ceilings and beams,’ says Peter.

Peter lives on the top floor with his wife and dog: ‘No-one wanted the attic. I also had a horror of sloping ceilings and beams,’ says Peter. But he worked with architects Fuhrimann and Hächler to transform the space into a bright and airy loft with a four-metre-high ceiling: ‘We have the same taste, so we never argued.’ Nearly twenty years on, he still loves his home. ‘But I often buy new furniture.’ Most of this comes from a furniture maker in Bülach – including the pale yellow kitchen, the sideboards and the large dining table – along with pieces that Peter finds for his gallery and online shop 1000-objekte.ch.

Peter loves looking out over the city from his favourite spot in the apartment: ‘I always feel a bit like Mr Spock in his cockpit.’ The view has changed considerably over recent years: ‘Every square centimetre of this district has now been sold and built over.’ From the balcony off his kitchen the view is of new buildings – the old Bernoulli buildings are concealed by new complexes. ‘I liked it better before,’ he says. ‘It was a sleepy neighbourhood. There were no shops or cafes.’ When he moved in, the bridge over the Limmat still hadn’t been built: ‘The footpath used to be empty. Today it’s busier than Bahnhofstrasse.’ He occasionally thinks about moving away, ‘but not really’. He can’t imagine living anywhere else in Zurich.

Peter calls himself a pathological collector. His greatest passion is designer furniture and Murano glass

Peter is originally from Bern: ‘Everyone said I would never leave Bern, but I did it anyway.’ He ended up in Zurich for work reasons: ‘I was quite afraid of Zurich. The city was too busy and aggressive for me.’ In 1986 he set up his own agency here, which he managed successfully for eighteen years. Then he left it to his junior partner to run, as he wanted to try something new. ‘But I soon realised that I can’t actually do the things I wanted to do, and the thing I was good at – marketing – was something that I didn’t want to do any more after so many years.’ He felt he was too old to study something new. In 2005 Peter opened a glass and design gallery in Niederdorf: ‘That was my hobby back then.’

‘Then I wanted to collect something less macho than robots,’ says Peter.

He calls himself a pathological collector. His greatest passion is designer furniture and Murano glass. Before that, he collected robots from the 1950s and 1960s. At one point he had the largest collection in the world and was interviewed by newspapers and TV. People would ring his doorbell and ask to see the robots. ‘I always had to tell them the same thing. I no longer enjoyed having them.’ He sold all 1,200 of his robots to the Vitra Museum in Weil am Rhein.

‘Then I wanted to collect something less macho than robots,’ says Peter. Paintings were too expensive, textiles too boring. ‘But glass is so fascinating!’ At the beginning he learnt as much as he could about glass art, ‘but I also bought a lot of crap that I’ll never be able to sell.’ He currently owns 4,400 pieces and puts some of the best ones up for sale online and at auctions. ‘It always hurts to sell them. But it’s also liberating,’ says Peter who, a few years ago, co-curated a glass exhibition at the Museum Bellerive.

He also likes buying art, music and furniture: ‘And I’m always seeing houses in beautiful locations, but of course that’s not possible. Nowadays I just want a quiet life.’ He’s spent enough of his life in the rat race, particularly when he was marketing manager for Camel cigarettes. ‘I was constantly on planes and in hotels, eating weird food and meeting lots of people.’ Now he enjoys his free time. He has given up going to raves and has been taking piano lessons twice a week for the last four years: ‘I started from zero and even had to learn to read music,’ says Peter. ‘The triangle would definitely have been easier.’ But he’s always loved the piano. ‘It has 88 notes so it’s like a mini orchestra.’