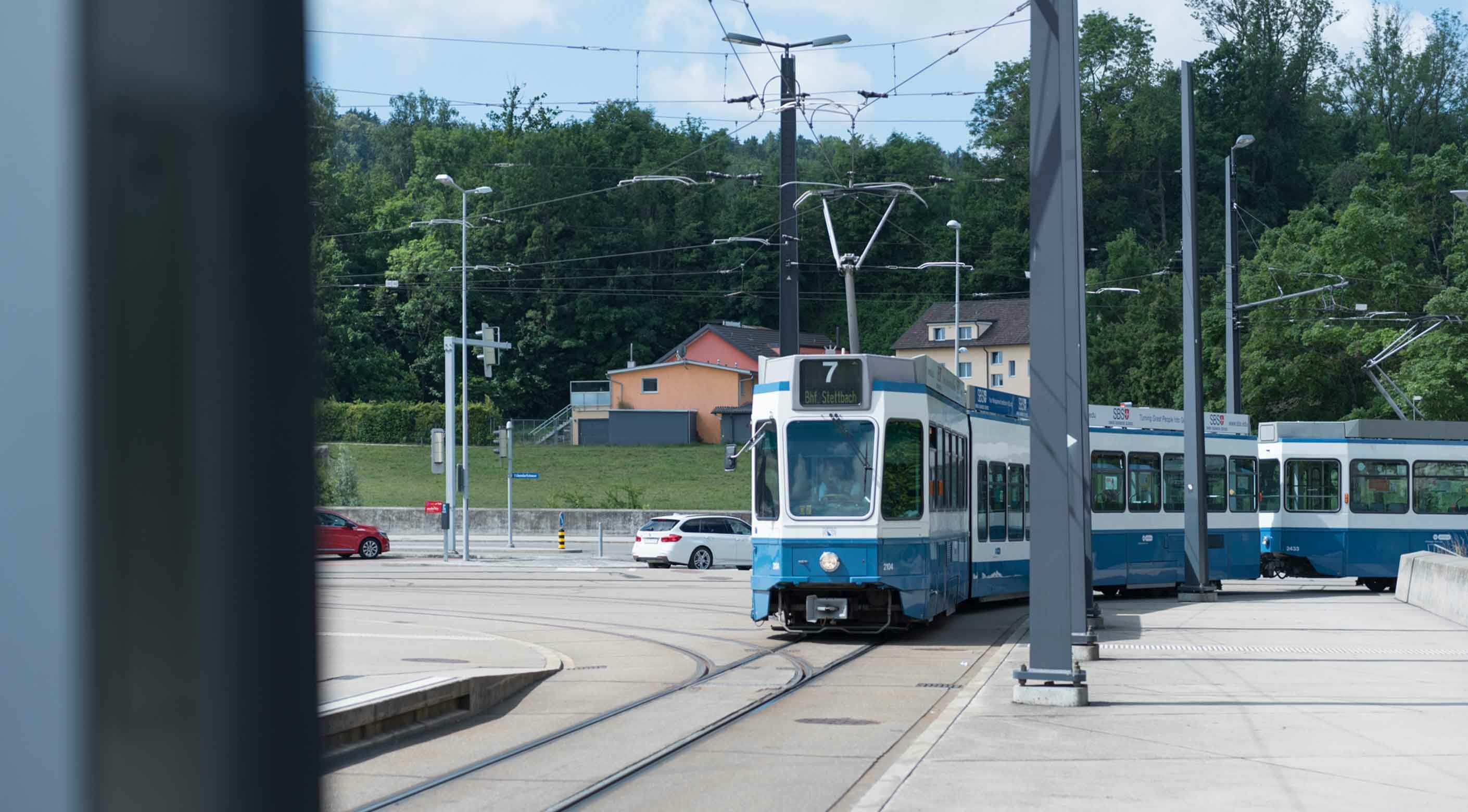 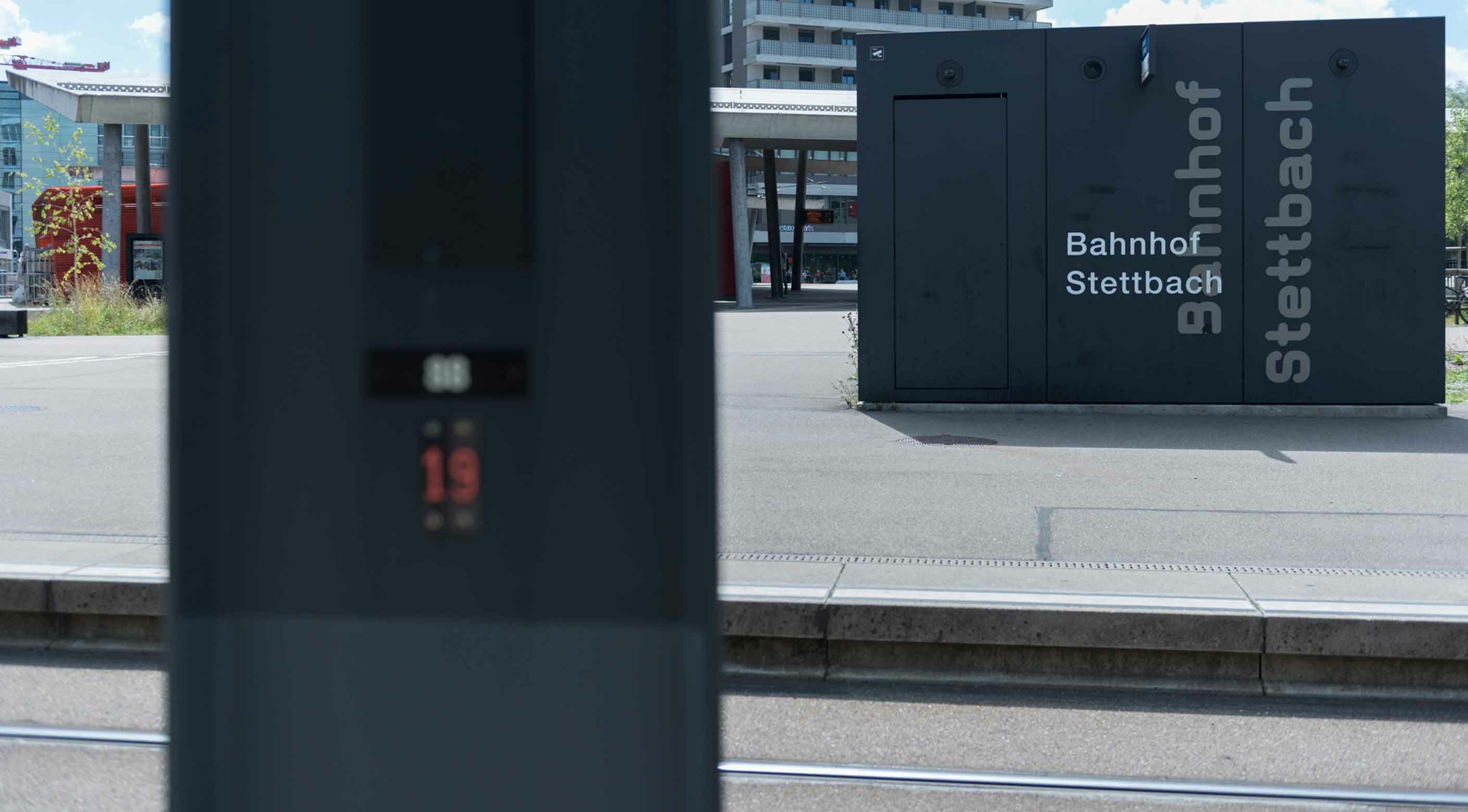 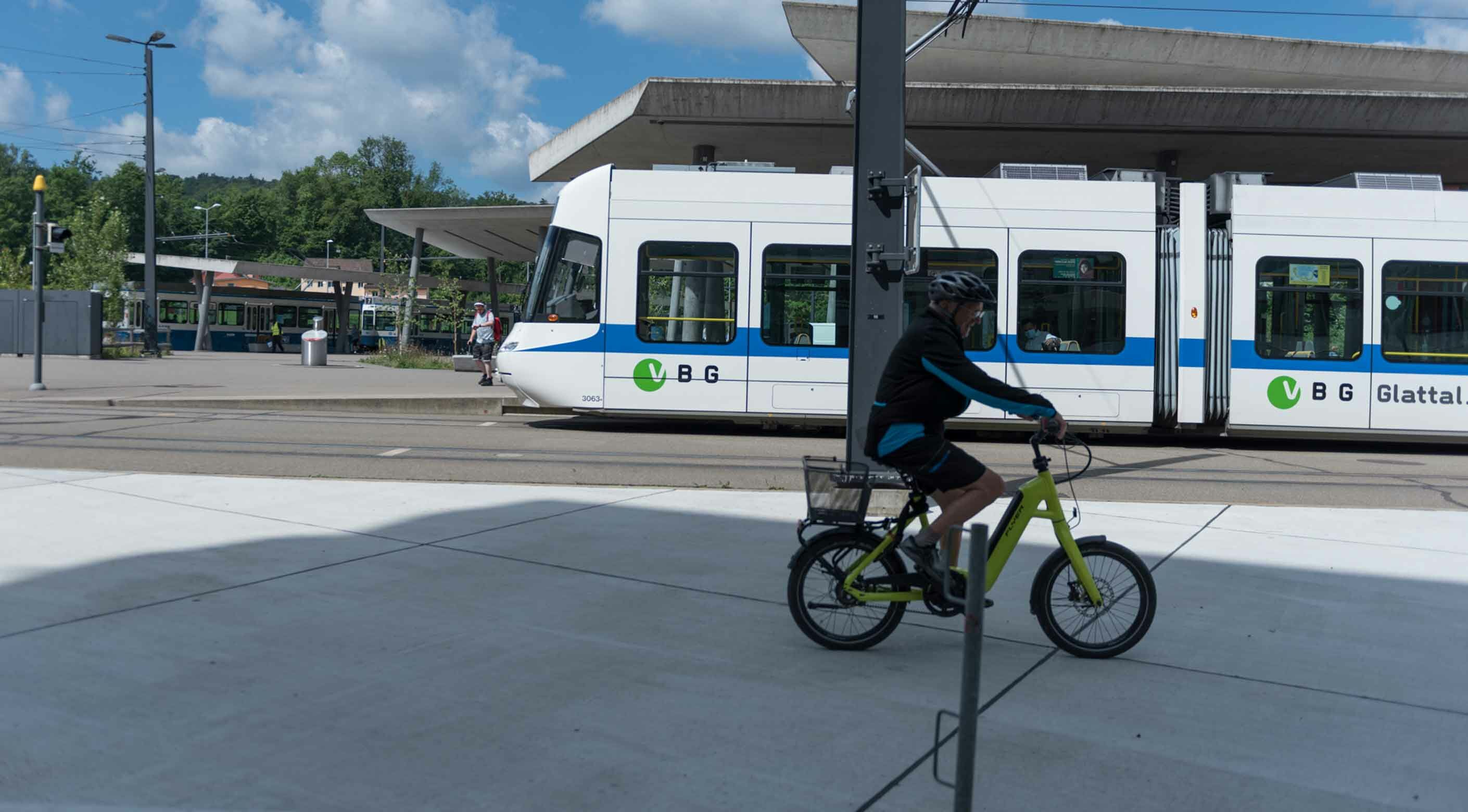 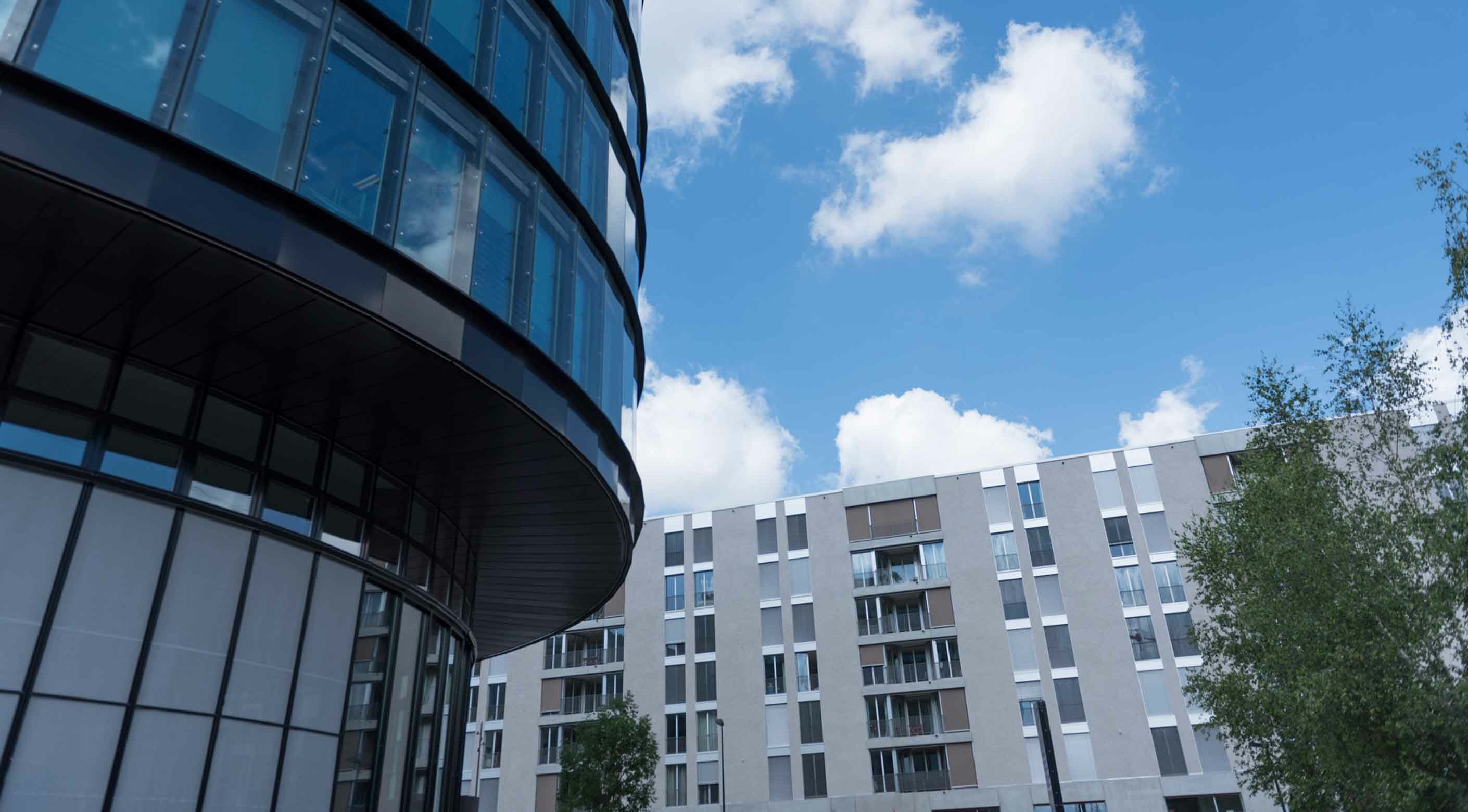 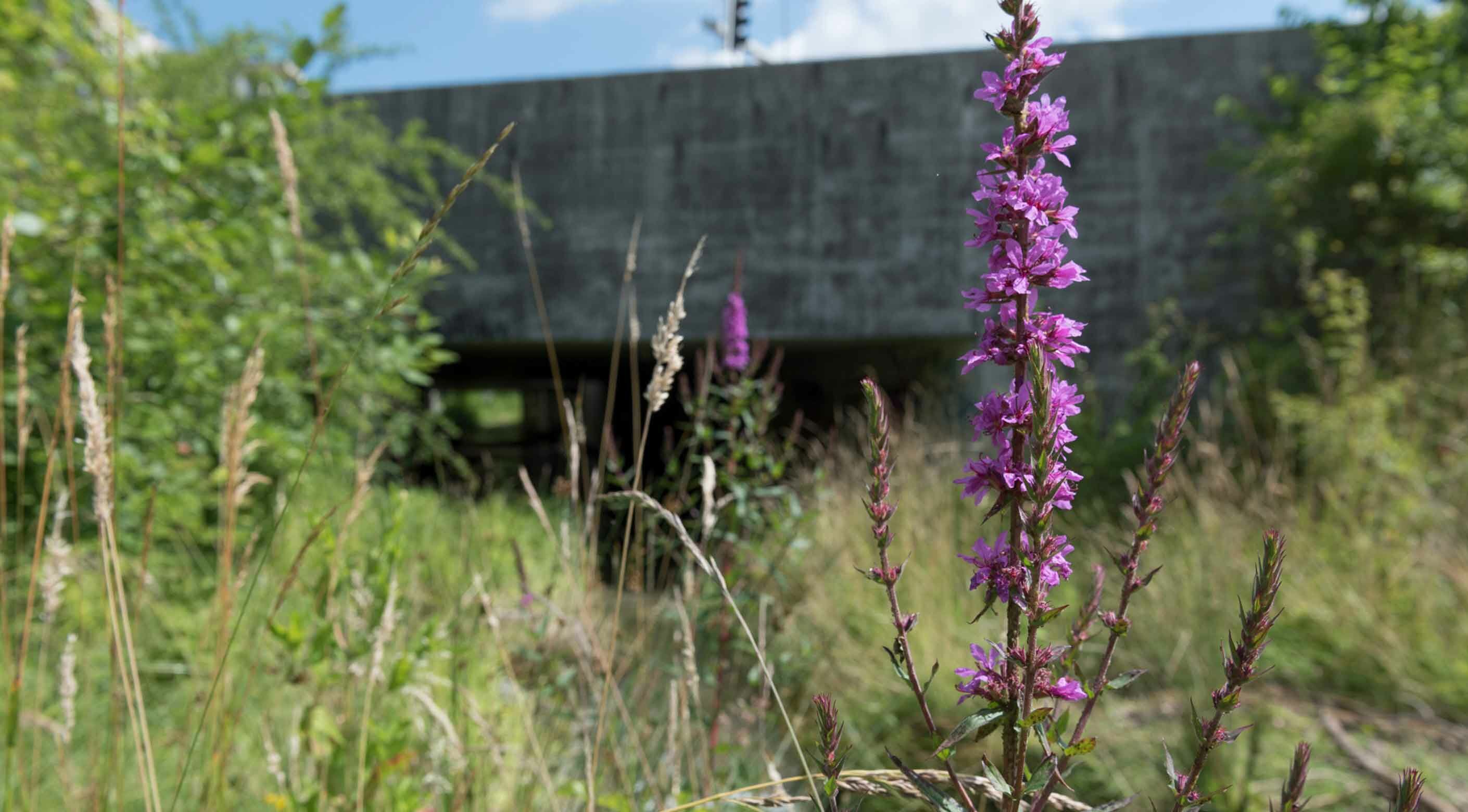 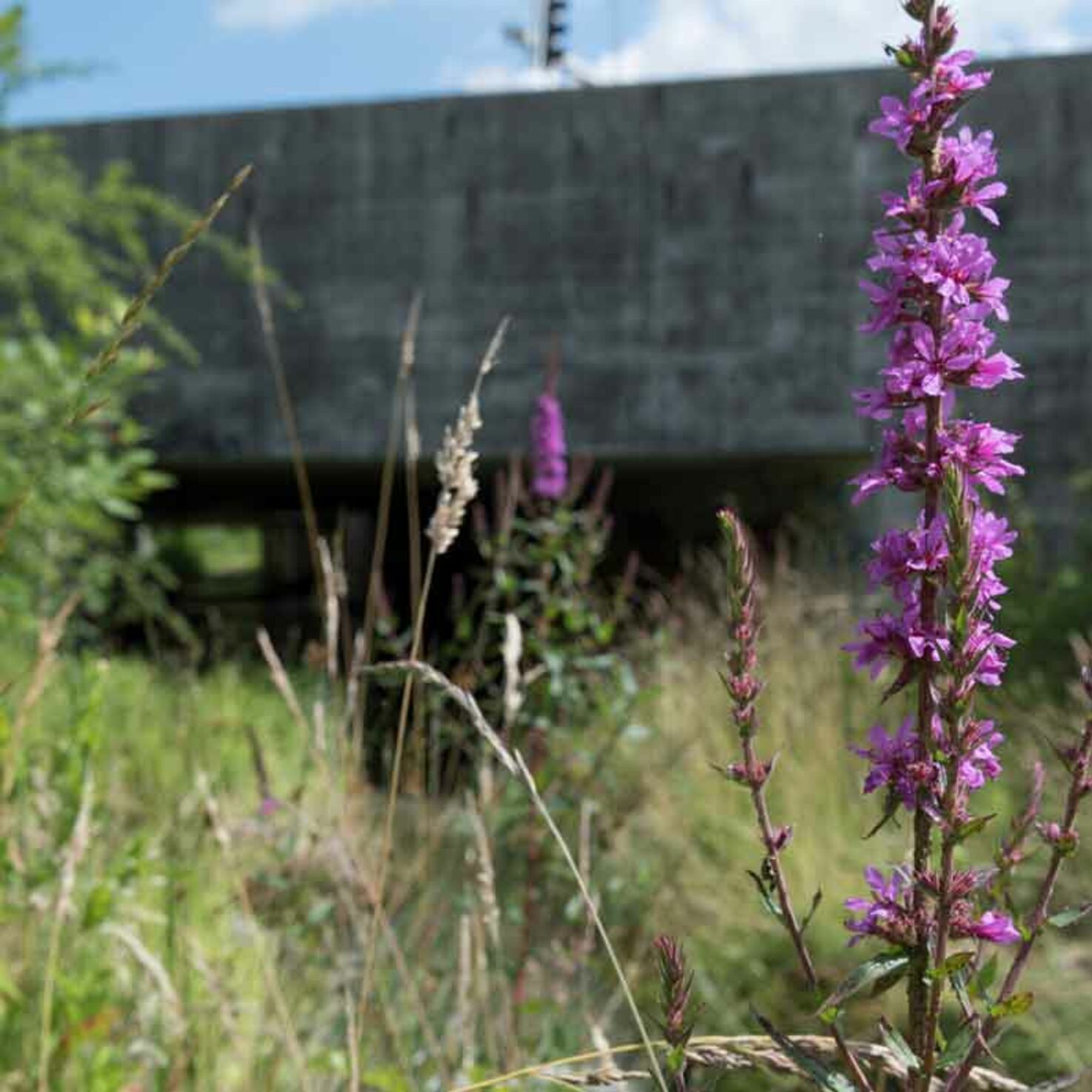 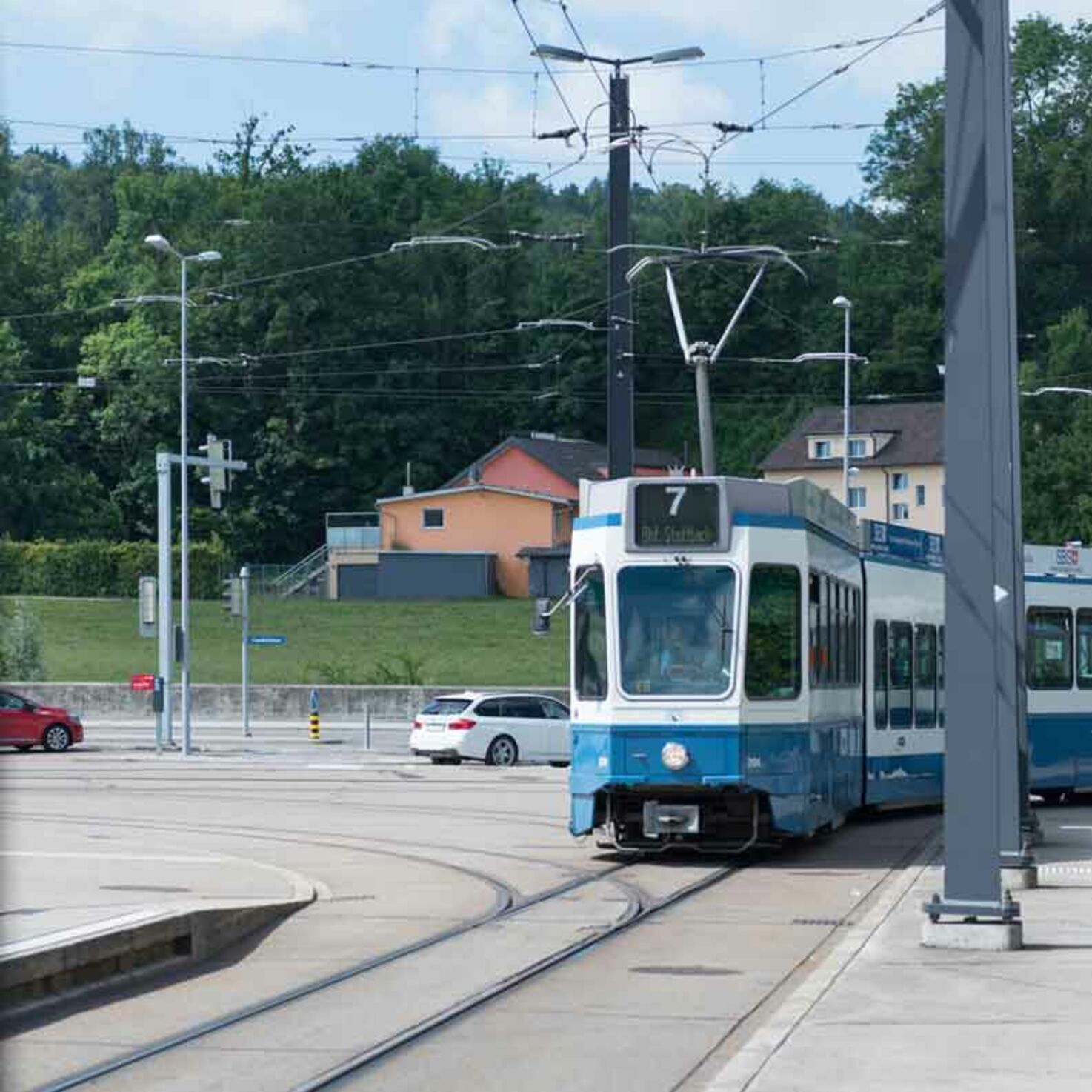 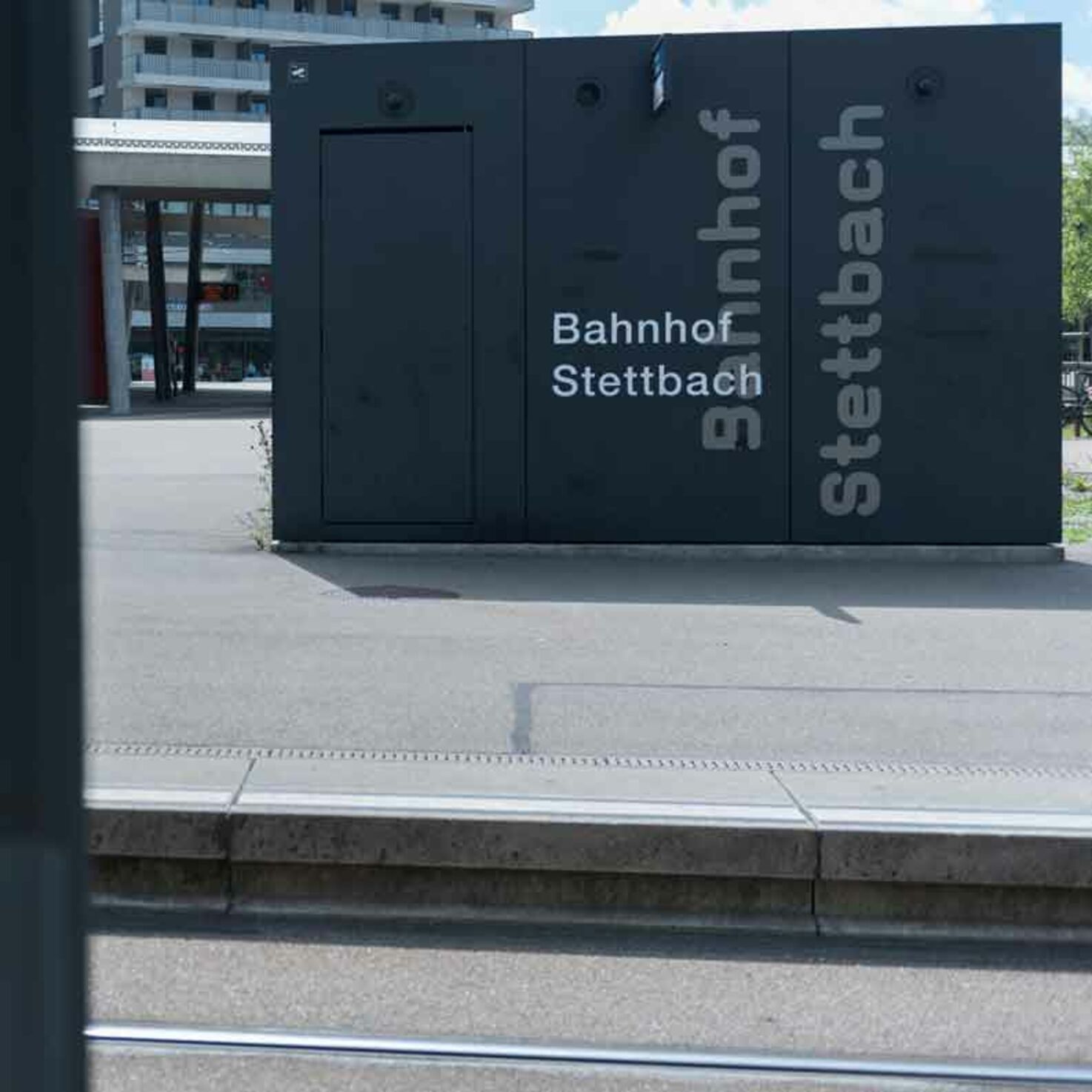 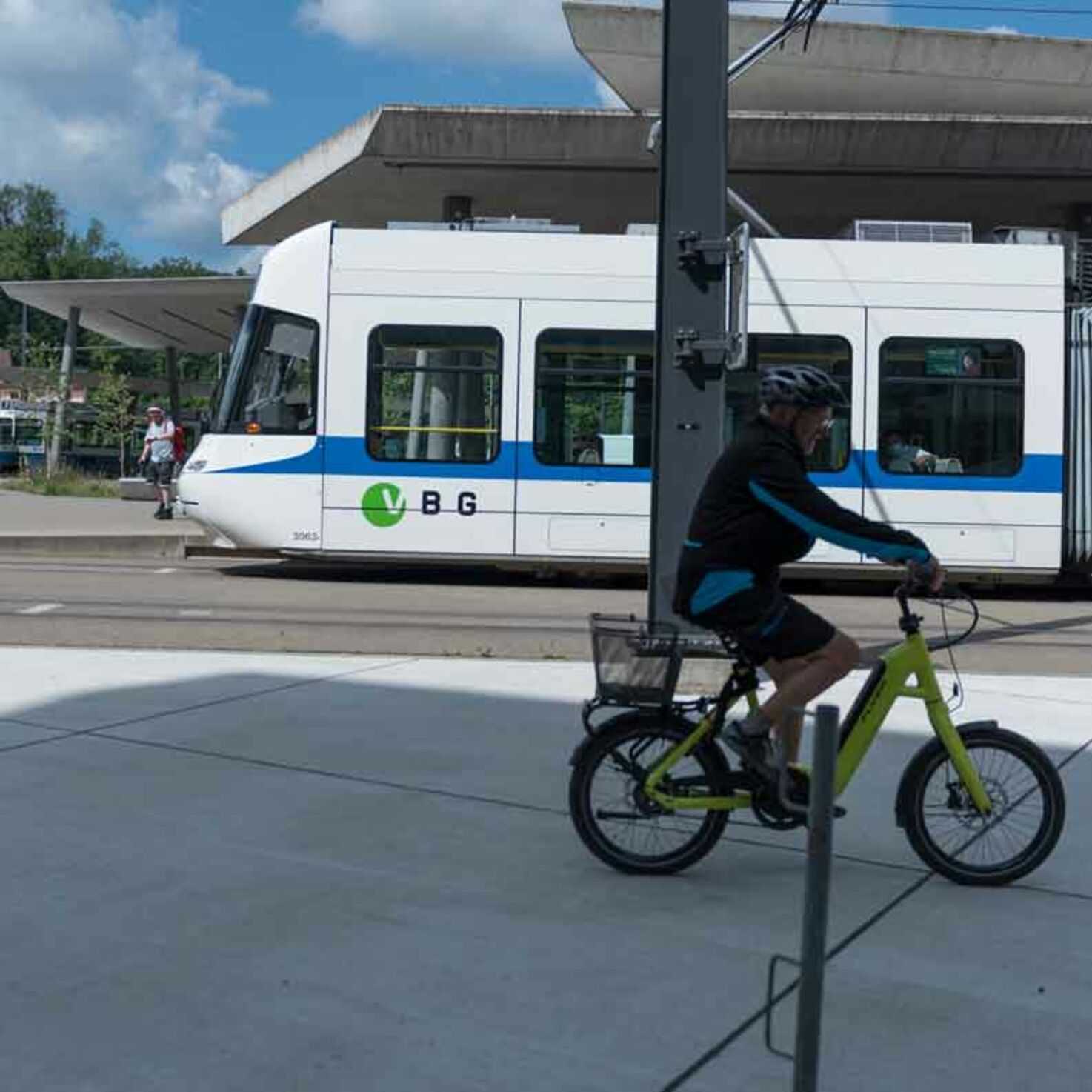 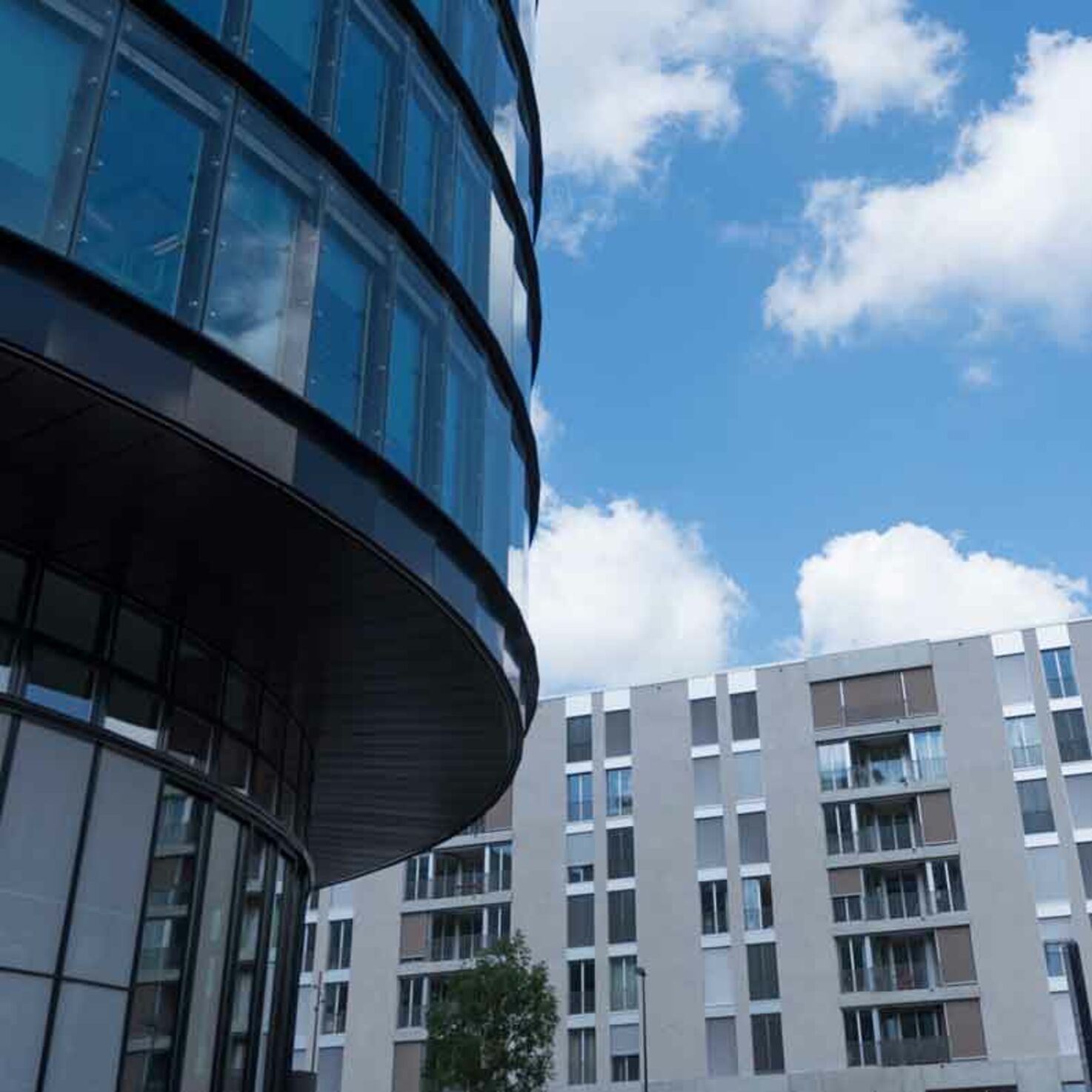 Stettbach train station, which was built onto the tram terminus, became part of the history of Swiss transport as part of a new S-Bahn (city railway) connection. To this day, there is much in the area around the tram turning loop that has a rather temporary look to it.

If you come up to the surface from the underground platforms of Stettbach S-Bahn station using the stairs on the side closer to the mountain, you will look straight out onto a green meadow. It is a situation that feels slightly surreal. From the meadow, too, you get an unusual view – almost as though the stairs leading to the platforms were somewhere in an open field. Even now, the urban development work around Stettbach terminus, where the No 7 tram turns around, seems to be still in progress

Indeed, what happened first, in 1986, was that a tram terminus was built in the no-man’s land between the boundaries of the settlements belonging to Zurich and Dübendorf – virtually on an open meadow. Then, by 1990, the S-Bahn station was added underground. It was part of a new transport axis that would subsequently lead through the Zürichberg to Stadelhofen and on to the central train station. To this day, the area radiates a certain inner emptiness: after all, the various office blocks, with a health insurance company prominent among them, do look rather uniform. Nevertheless, some businesses have actually popped up right next to the tram turning loop, such as the ‘Bahnhofapotheke’ pharmacy, a bank branch and a nail bar.

There are still construction machines for making road surfaces standing around between the house fronts – showing that, even in 2021, building work in Stettbach is still not finished. However, Stettbach train station, at least, is a genuine transport hub. There are even some buses departing from here – and the Glatttalbahn light rail system has also stopped here since 2010.

One day, a cable car is supposed to take passengers directly to the zoo.

The funicular leading to the zoo, which has been much talked about in the media for years, still exists only on the drawing board. One day, it will take passengers up from Stettbach to Zurich Zoo. That would probably do a lot to ease the zoo’s traffic problem. However, political resistance to the project has now delayed it so much that the technology of ropeway systems has advanced in the meantime and made adjustments necessary.

A first attempt to create the zoo funicular was made in 2005. Then, in 2014, the Zurich administrative court upheld a complaint by the ‘Zoo Seilbahn Nein’ (‘No to the zoo funicular’) association. After that, however, matters took another turn in 2018, when Zoo Seilbahn AG launched fresh plans. In August 2020, the construction court of appeal either rejected some appeals or declined to hear them. It is still unclear when the project will continue. However, one thing that is already clear is that the station at the foot of the funicular would be located in the very middle of the tram turning loop. Incidentally, this loop is shaped like a large triangle with rounded corners – which is unusual for Zurich.

Although the square is located on Zurich’s territory, the name Stettbach comes from a district in Dübendorf. This is why the SBB (Swiss Federal Railways) and VBZ (Zurich Public Transport) companies decided – diplomatically and with historical accuracy – to identify the S-Bahn station not as Zürich Stettbach, for example, but as S-Bahn-Station Stettbach or Bahnhof Stettbach. However, here on the ground it is far from clear where Zurich ends and Dübendorf begins – but that does not actually matter. For example, the nearby JaBee Tower catches the eye. It is located on Dübendorf soil, but its unusual round shape makes it stand out, and it therefore clearly belongs to the skyline of the Stettbach public transport hub.

A "lipstick" provides the overview.

Thanks to the giraffe principle – at least, according to the image conjured up by the real estate marketing website – people will enjoy a panoramic view of this part of the Glatttal from ‘one of the highest residential buildings in Switzerland’. The tower with its 32 storeys stands 100 metres tall, and it was completed in 2019. At first glance, you simply see the JaBee Tower as a cylinder, but it actually has an elliptical ground plan. With its bevelled tip, it would be no wonder if the building were to become commonly known as ‘the lipstick’.

Stettbach, the small village that grew through history and gave its name to the station, lies a short distance above the terminus. A country path takes you there, and there is actually a brook (‘Bach’ in German) babbling alongside it. ‘Stettbach’, according to placename historians, means ‘the brook beside the dwellings’. To this day, however, the brook’s name is, strictly speaking, Sagentobelbach. It originally gained its name from a sawmill (‘Sägerei’ in German) in the Tobelhof area, higher up near the Dübendorf district of Gockhausen. Public transport construction work near the tram terminus has already made it necessary to change its course twice. This makes it clear that, in Stettbach, it is human beings who tell the water where to go – or flow. Meanwhile, the search for an architectural identity is something the remains in flux in the transport hub of Stettbach.

Tram line 7 runs between Stettbach station and Wollishoferplatz. This route takes about forty minutes. Click here for the timetable.