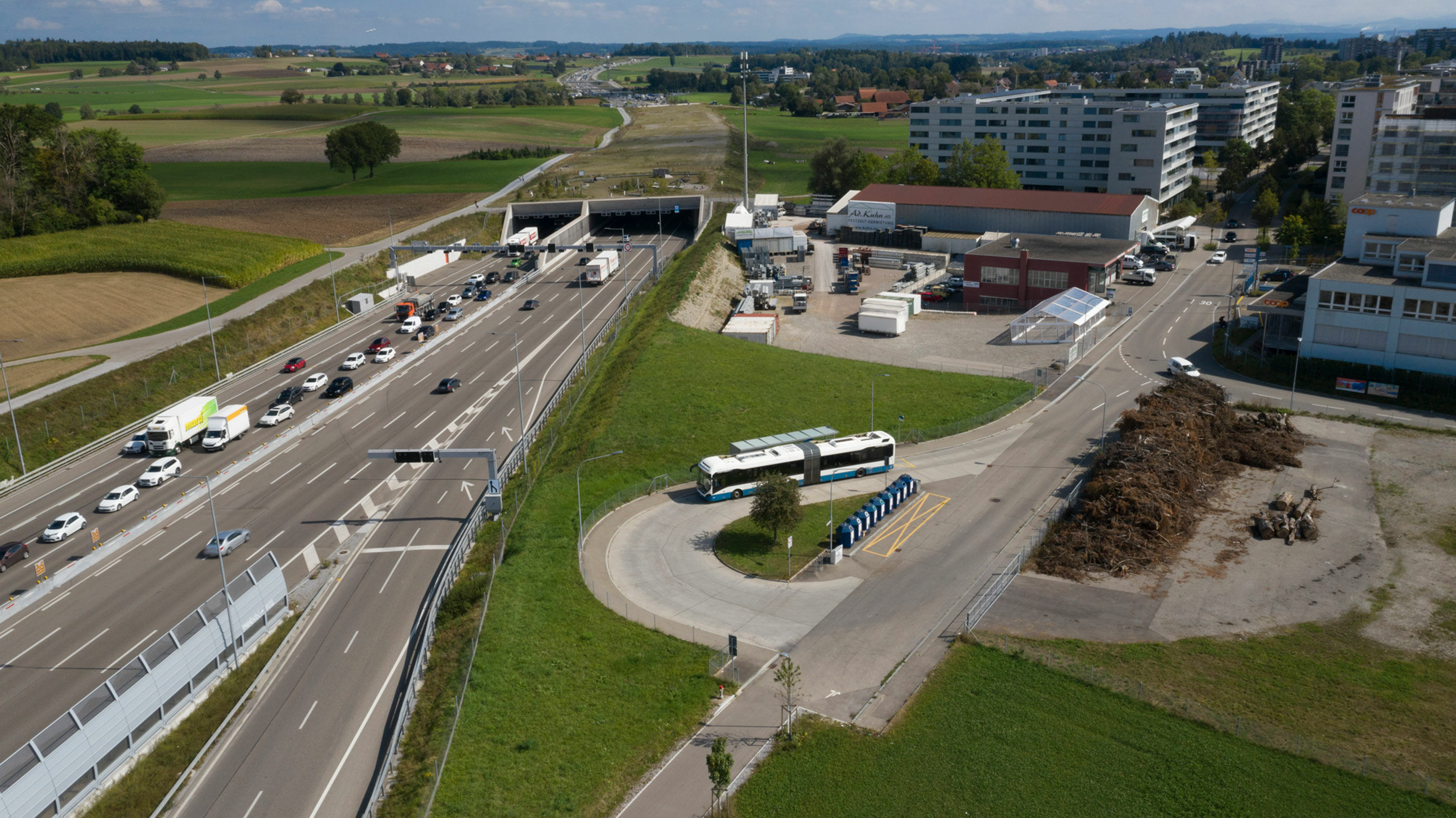 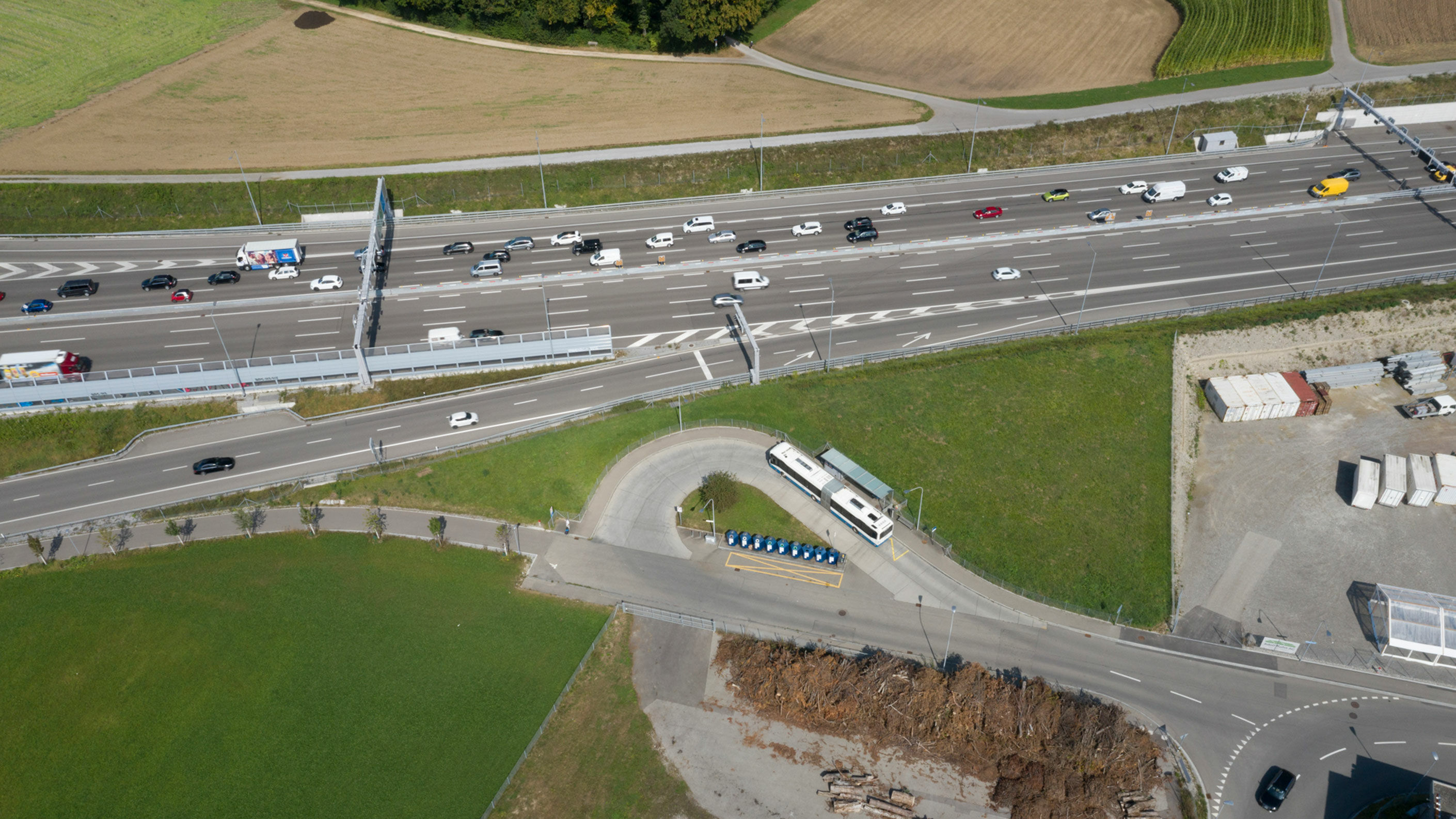 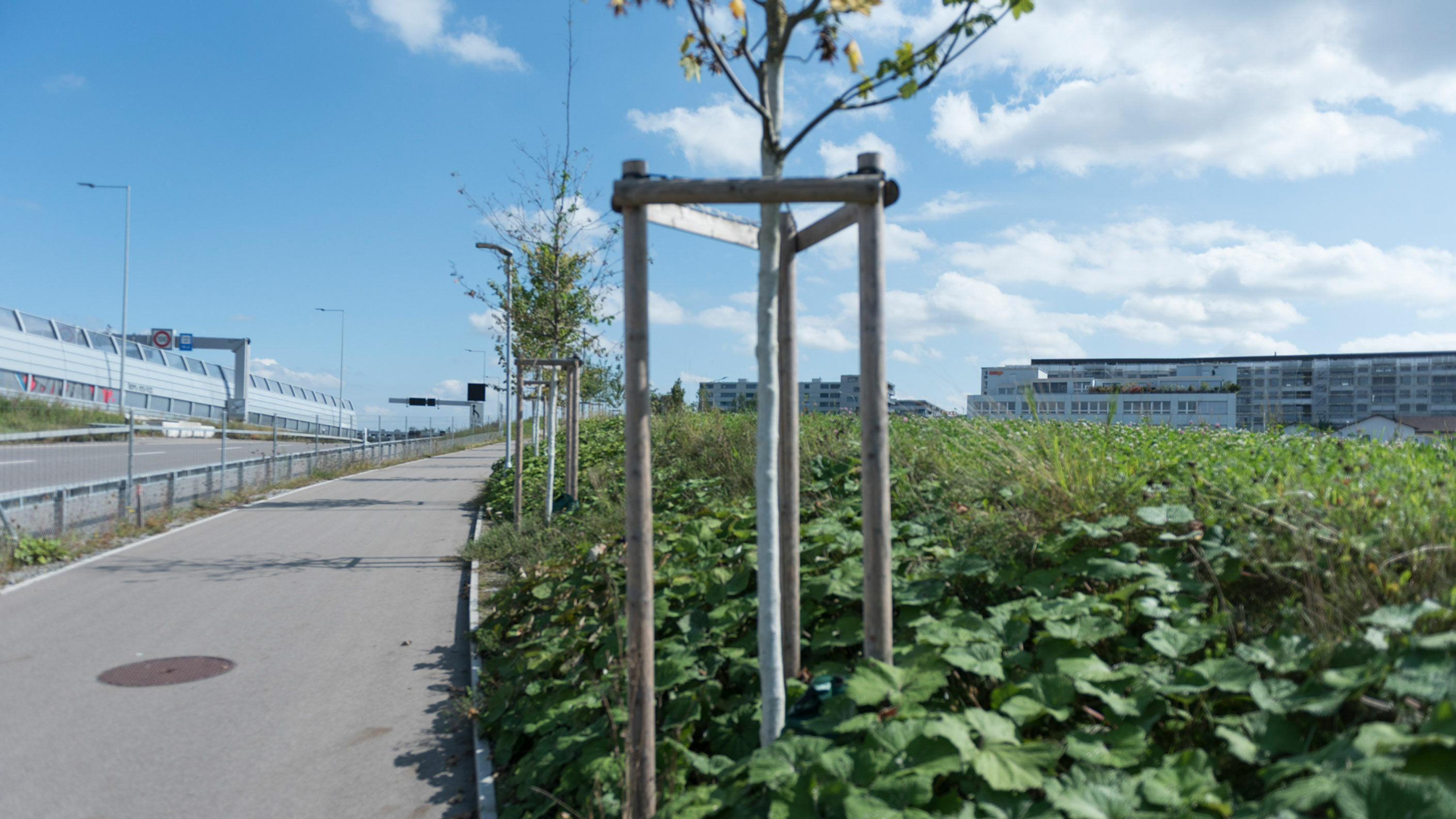 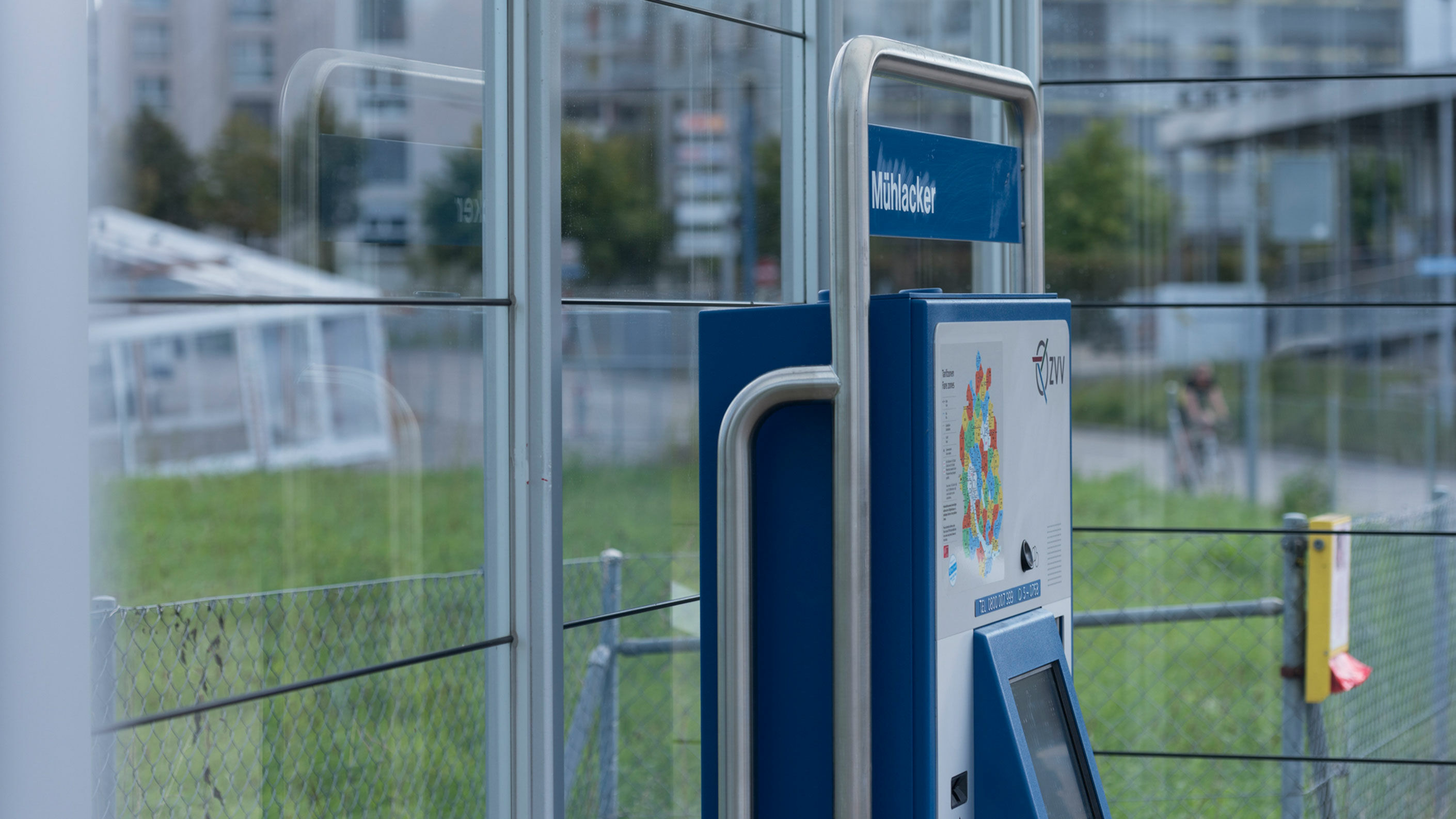 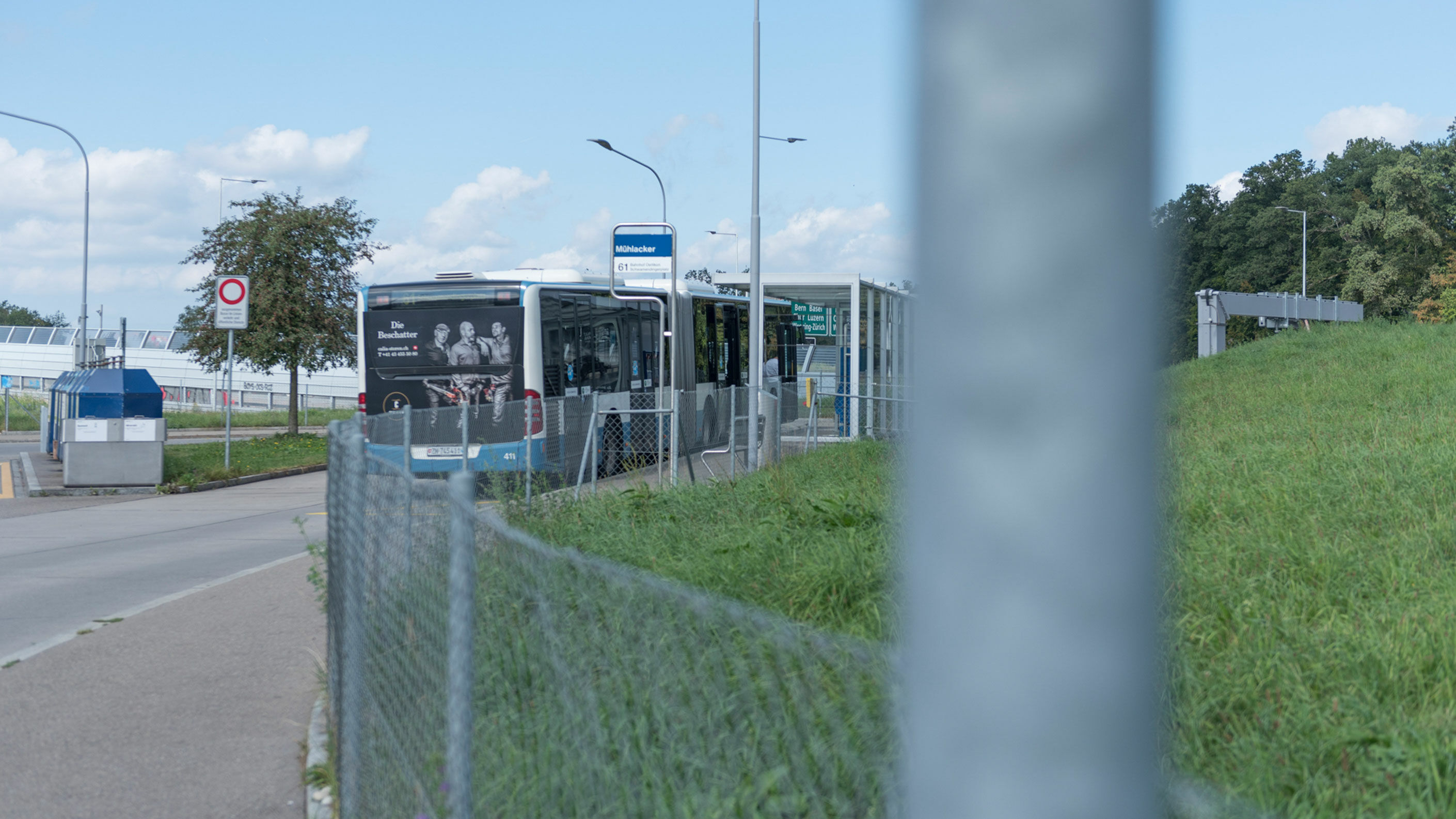 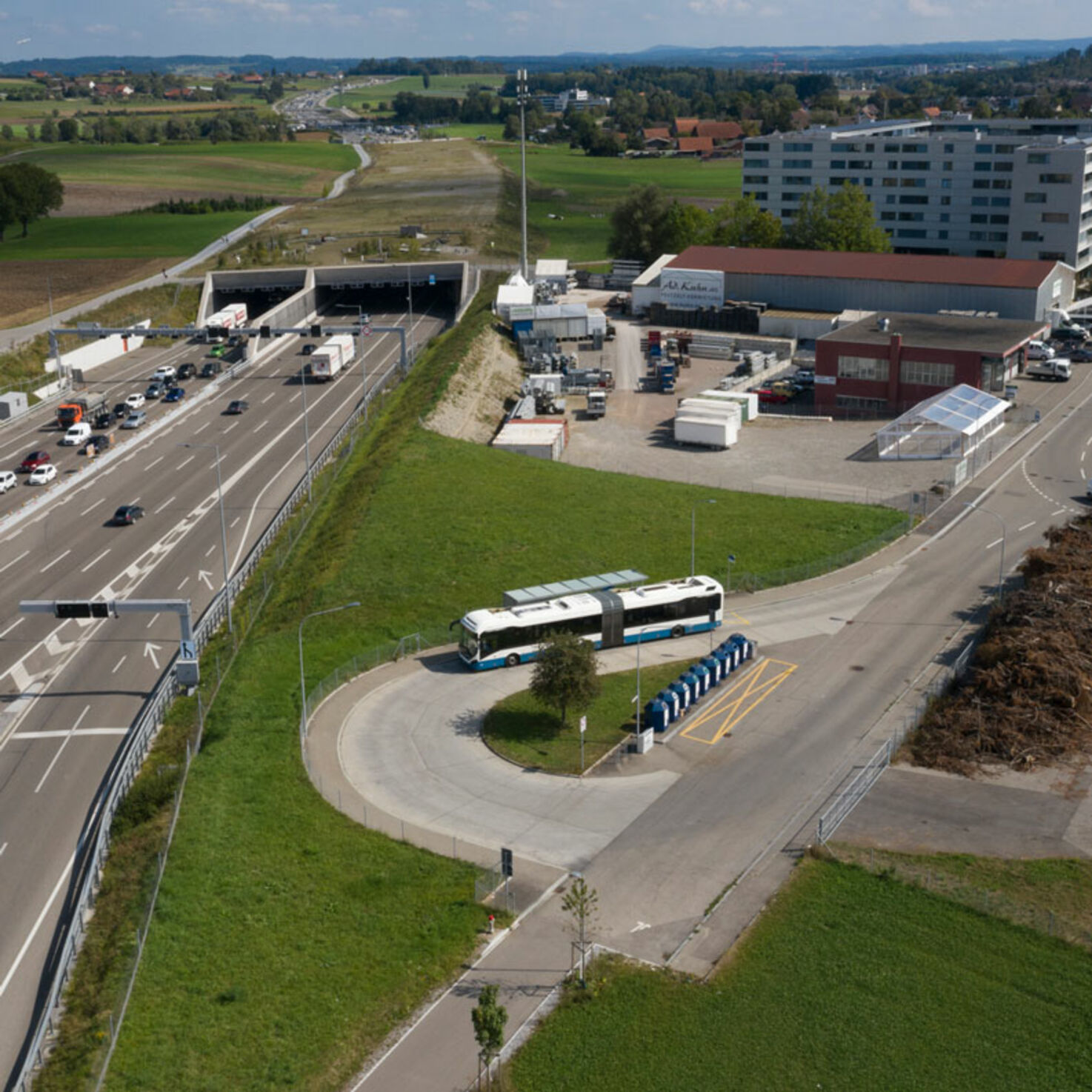 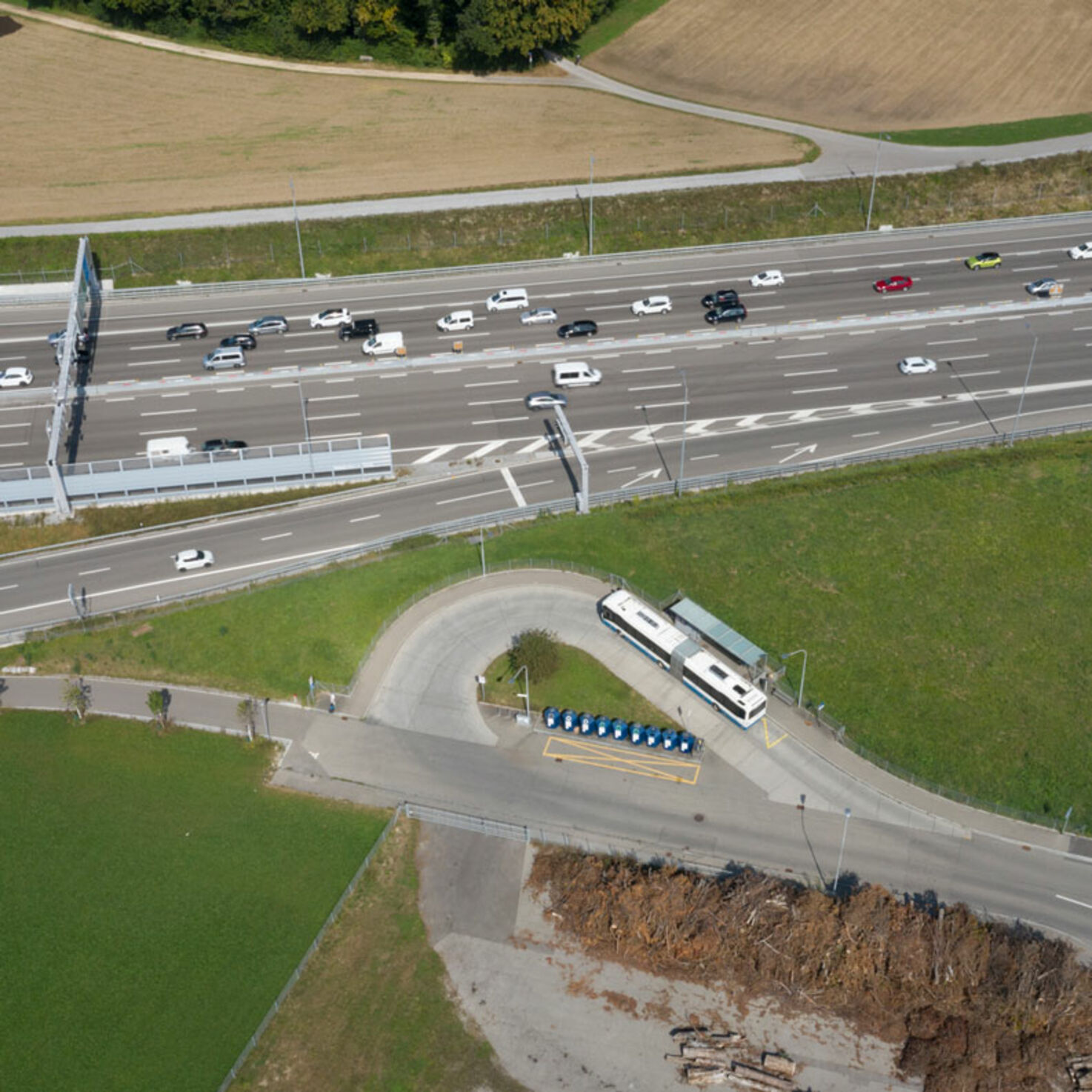 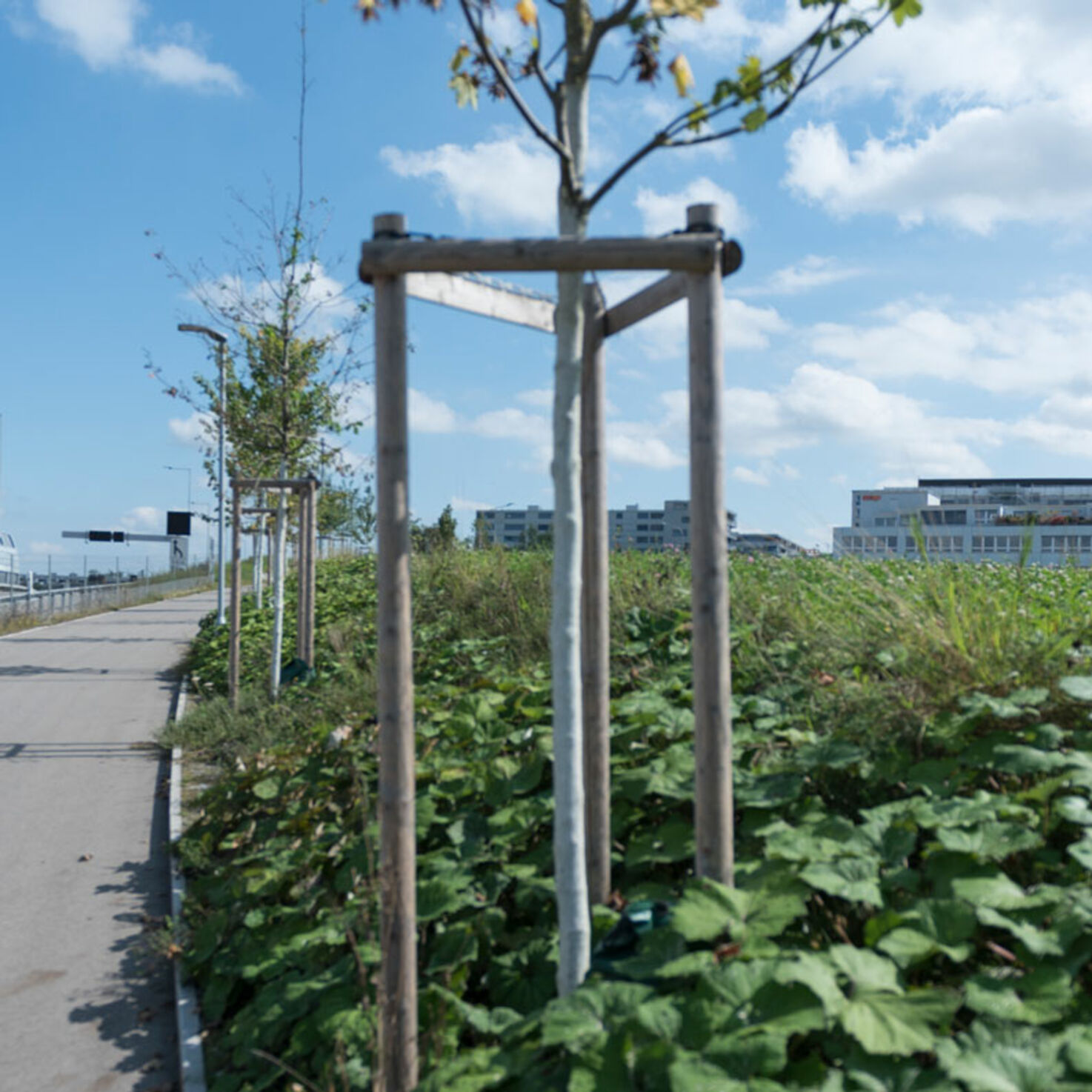 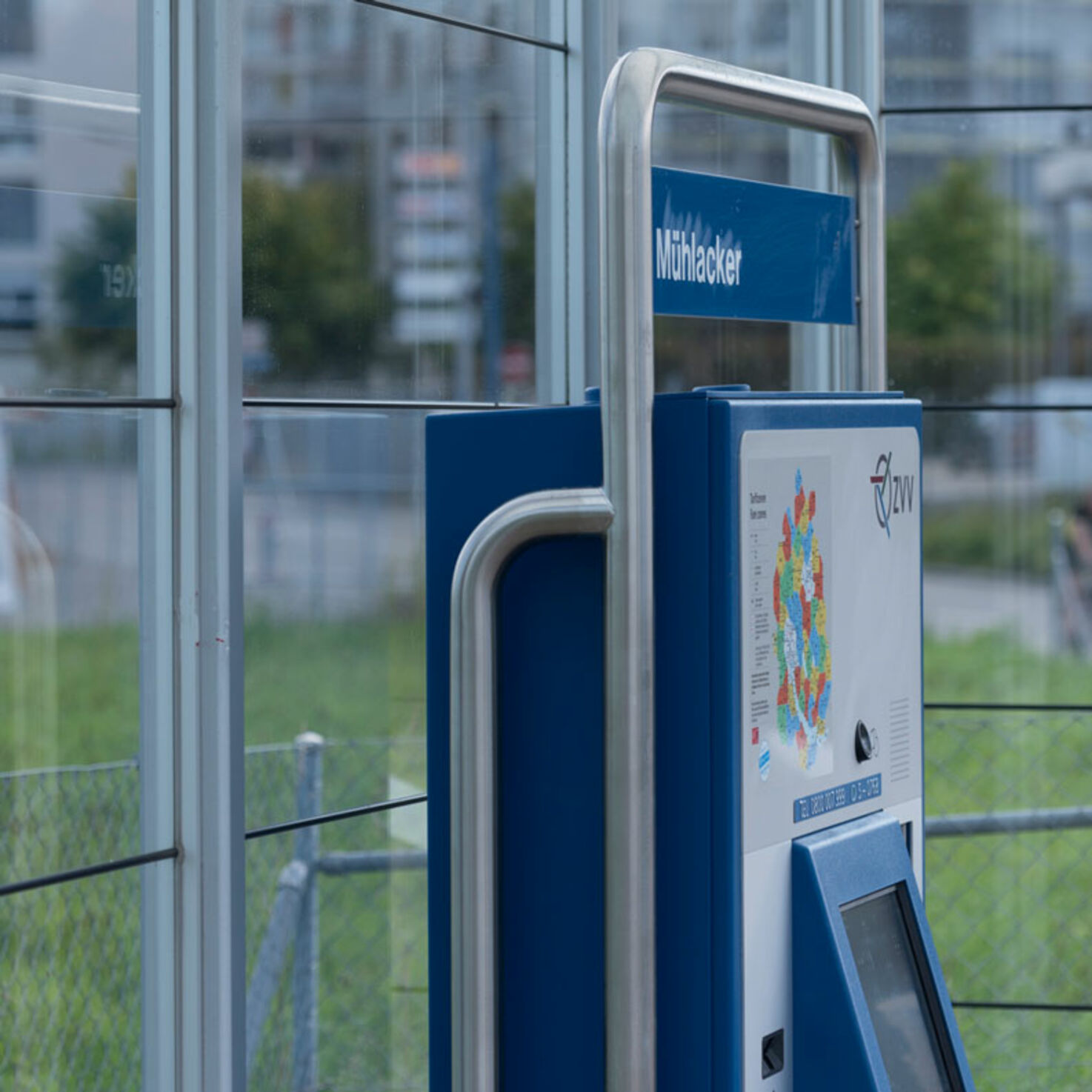 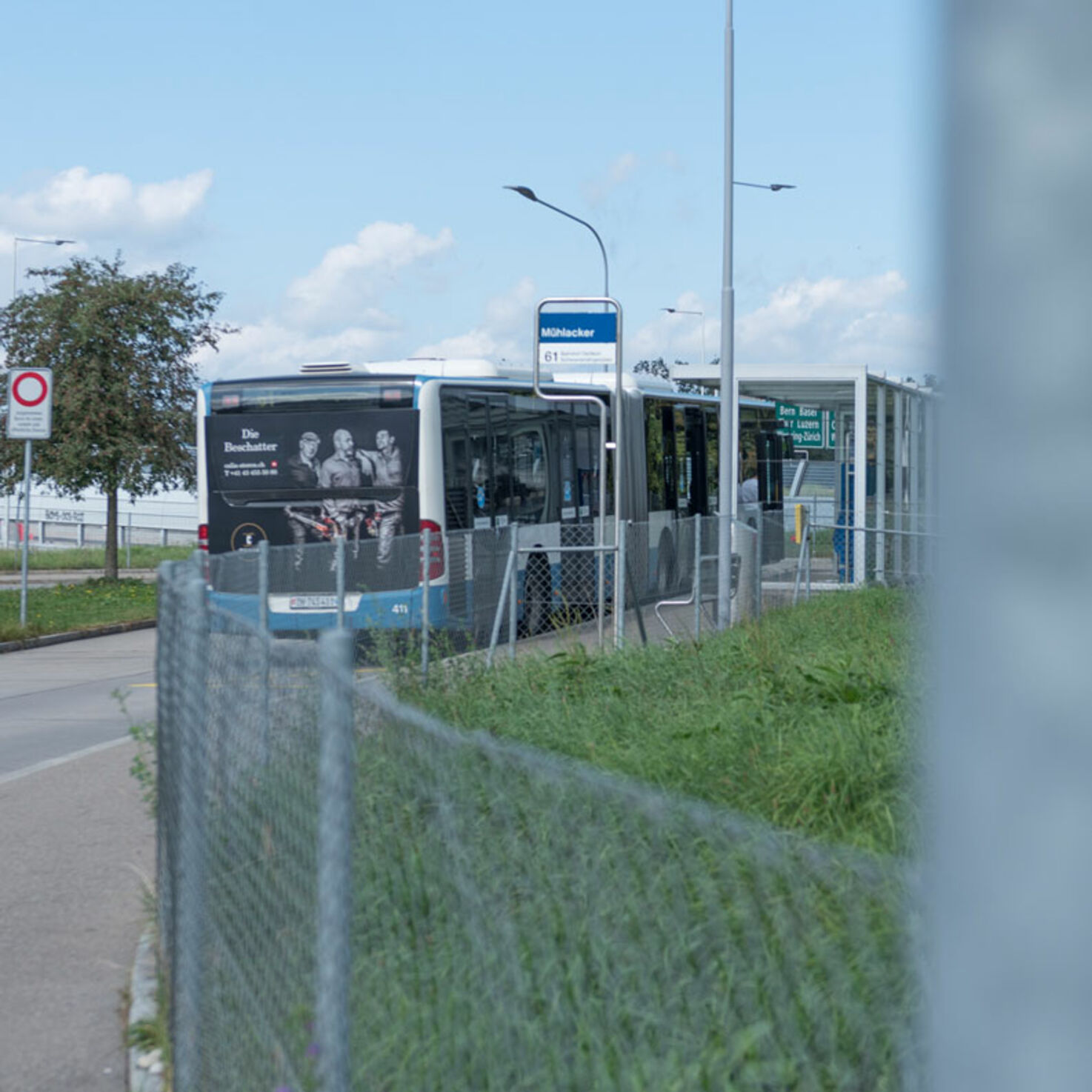 The Mühlacker terminus of bus route 61 is certainly functional, but it is totally charmless. But, on closer inspection, it emerges that the stop with the pretty name (“mill field”) does actually suit this area on the edge of the northern ring road.

Mühlacker – what a name! A mill, a field, an ox and a horse pulling a cart loaded with flour sacks – it conjures up quite a romantic picture. But unfortunately the Mühlacker terminus at the end of bus line 61 is completely devoid of nostalgic references to times gone by. In fact, this VBZ stop with its teardrop-shaped turning loop is probably not even the nicest vehicle turnaround in Zurich.

This is mainly a residential neighbourhood with a little remaining industry. At the far end, the stop is sandwiched between a massive wood pile and the motorway. At this point, Mühlackerstrasse turns sharp left, closing off the residential area at a spot where it gradually narrows due to the acute angle of Wehntalerstrasse and the northern ring road.

This terminus used to be quite an oddity.

This terminus used to be quite an oddity – the bus route terminated here until 2009, but at first there was no turning loop, which meant that the buses had to continue on to Regensdorf before they could turn around. The display would read “Not in service” while they did this. The public thought these 5-kilometre runs without passengers were ‘stupid’. According to a media report, the VBZ justified the situation by saying the journey to the turning point couldn’t be run as a regular route ‘because the VBZ area doesn’t extend as far as Regensdorf’.

This annoying situation was finally brought to an end with the construction of a turning loop. A recycling point was also installed, so people now drive here to deposit their waste glass alongside the buses. Until 2010, the number 62 bus followed this route, but it used to branch off, with alternate buses travelling to Unteraffoltern. The VBZ realised this was confusing, so it introduced today’s line 61 in 2010. Its other terminus is at Schwamendingerplatz.

The city authorities awarded this development an architectural prize in recognition of its high-quality construction.

As you go along Mühlackerstrasse, one residential development follows the next. Some of these are cooperative housing developments that promise high quality at affordable prices. One of them is called ‘Klee’ – clover. The inner courtyard is in the shape of a clover leaf. In 2016 the city authorities awarded this development an architectural prize in recognition of its high-quality construction.

Across the street, it feels quite deserted on a normal Friday morning. It’s very quiet. Someone is enjoying the sun on a balcony while one or two people are sitting in the courtyard. But it still feels strangely abandoned. It’s just as well that there are a couple of day care centres to prove the place is actually still alive. The austere architecture is brightened up a little by a dinosaur in the front garden of a nursery and other coloured lettering.

On the other side there are fields, woods and a lake, the Katzensee.

Despite all this, it’s not entirely unfitting that the name Mühlacker conjures up an idyllic rural scene. It may not be right at the terminus, but it is practically within walking distance. On the other side of what is now a 6-lane motorway there are fields, woods and a lake, the Katzensee. In 2018, a 600-metre stretch of the northern ring road here was roofed over to provide a crossing for wildlife. It also means the area’s residents now have direct access to the local recreation area.

Bus line 61 runs between Schwammendingerplatz and terminus Mühlacker. This route takes about thirty minutes. Click here for the timetable.