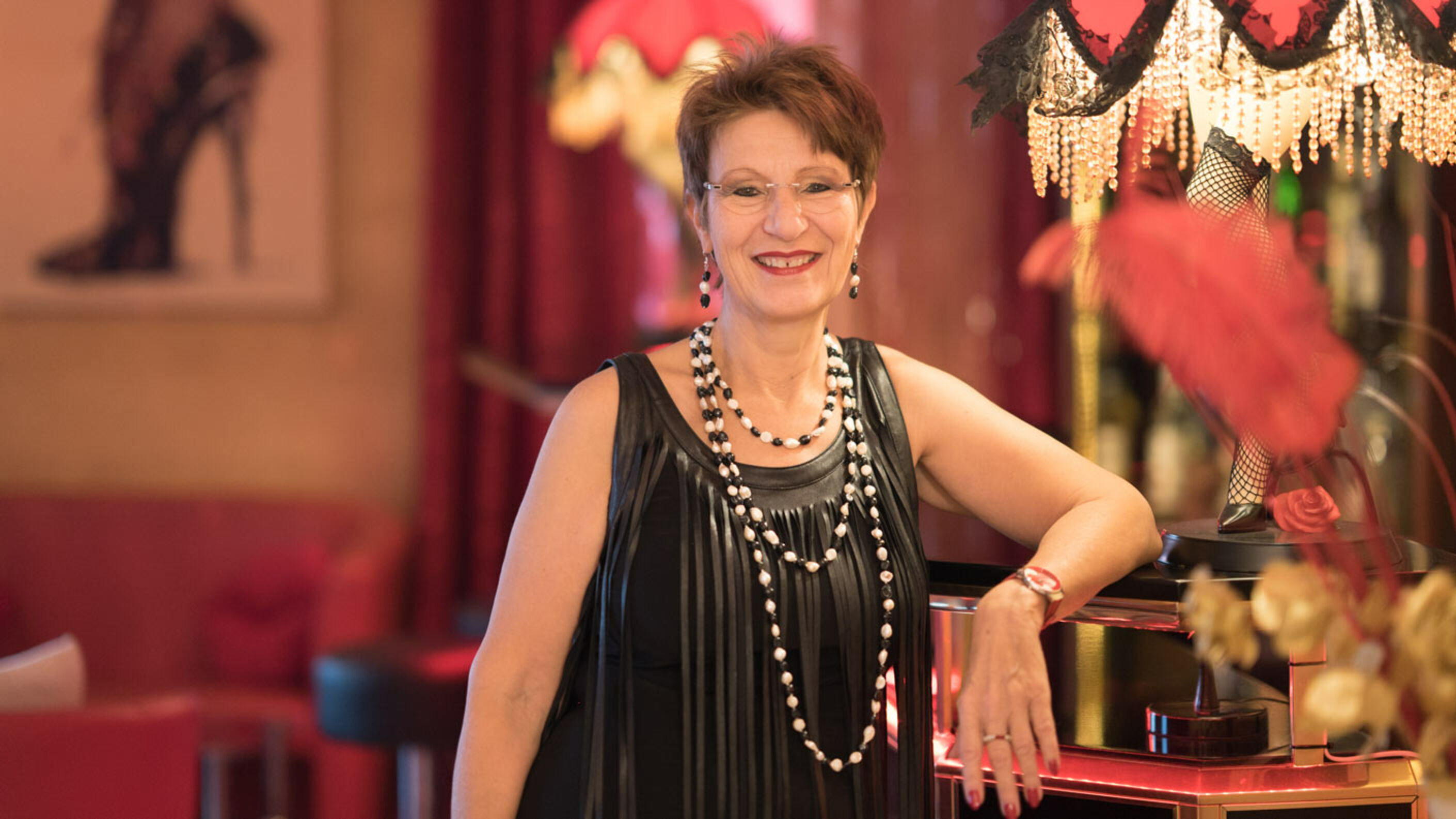 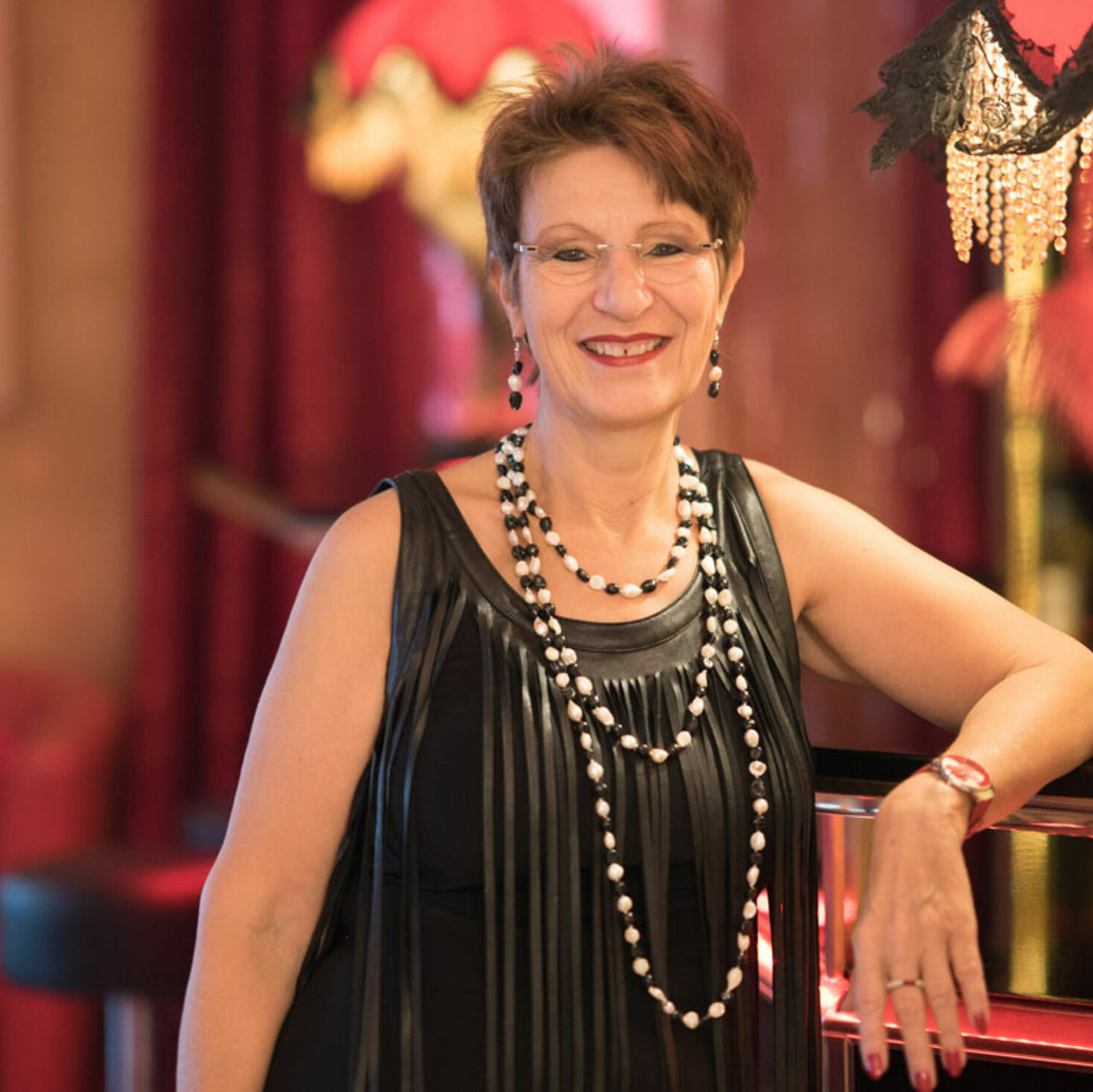 Mona entertained her first client when she was 47. Today, she and her ex-boyfriend run Club Eden in Schlieren. Our contributor Luisa Aeberhard visits Mona at work.

The blue house boasts bright red shutters, and the path to the front door is lined with shrubs. On the glass door, a small sign decorated with hearts greets visitors with the words: ‘Welcome to the most beautiful brothel!’ I’m about to ring the bell when I hear a man’s voice behind me:

I stare at him open-mouthed. The door opens.

The stairwell is illuminated by red LED strip lights, the walls adorned with posters of naked women. I’m greeted by a receptionist in a multi-coloured summer dress and sandals. She takes me into the kitchen. Cigarette smoke hangs in the air. She invites me to take a seat and says Mona will be right there.

A washing machine vibrates next to the fridge, bowls of condoms lie around. I hear giggling in the background, then the sound of approaching footsteps – it’s Mona, the madam of Club Eden. It’s not her real name, just the one she uses in her establishment.

‘When the girls are in the brothel, they’re different to when they’re outside. They’re playing a role and sex is their job.’

The prostitutes who work here also use pseudonyms like Crystal, Tiffany and Liberty. Six to ten women work at Eden, most of them from Eastern Europe. Mona says: ‘When the girls are in the brothel, they’re different to when they’re outside. They’re playing a role and sex is their job.’ Pseudonyms are important to prevent the relationship between the prostitute and client from becoming too personal, and above all to protect the women from stalkers: ‘It helps the girls to maintain a kind of emotional distance.’

‘I’m opposed to kerb crawling and drive-ins, but I support controlled brothels.’

The 62-year-old madam doesn’t beat around the bush when voicing her opinions: ‘I’m opposed to kerb crawling and drive-ins, but I support controlled brothels.’ Values like dignity and respect are very important to her. Mona says that prostitutes never attract society’s admiration, but hopefully a little respect: ‘Prostitution is an important job, I don’t like to see it forced underground.’ As she turns her head, her black-and-white earrings sway from side to side. She seems contented. But her life has had its ups and downs, both professionally and personally.

They even considered suicide.

After training as a typesetter, she spent many years working in the press and publishing industries as a graphic designer. Later, she and her boyfriend set up their own graphic design studio. At first everything went like clockwork, but at the turn of the millennium the industry began cutting back and the couple found their orders dwindling. The madam describes how they scraped by: ‘We barely had enough money for bread and butter – and couldn’t afford a sausage to eat with it.’ They even considered suicide.

Each room is different, but they all have one thing in common: whether it’s the Star, Jungle or Rose room, there’s a stopwatch at every door.

But, at the eleventh hour, Mona spotted an ad: ‘Woman wanted’. After much hesitation she finally dialled the number and a woman’s voice answered. She told me to go straight round, ‘So I did, and at the age of 47 I had my first client.’

That was 15 years ago. Mona says: ‘I learned a lot from working as a prostitute and it made me more confident – I’d do it again.’

They had the idea of setting up their own brothel when Mona’s ex-partner learned about the city’s various establishments while working for a sex guide. They bought a club in Zurich, but once again were dogged by bad luck – they found themselves in the midst of a legal dispute through no fault of their own and had to shell out a fortune in lawyer’s fees.

The pair have now been running the brothel in Schlieren for eleven years. Mona is front of house, while her business partner looks after the administration. The Eden is spread over three floors, with themed rooms that Mona decorated herself. Each one is different, but they all have one thing in common: whether it’s the Star, Jungle or Rose room, there’s a stopwatch at every door. Clients pay 100 francs for 20 minutes of pleasure, or 280 francs for an hour. ‘I always tell my girls: “Show your guests a little affection and you’ll get much more back.” It’s about doing good.’ 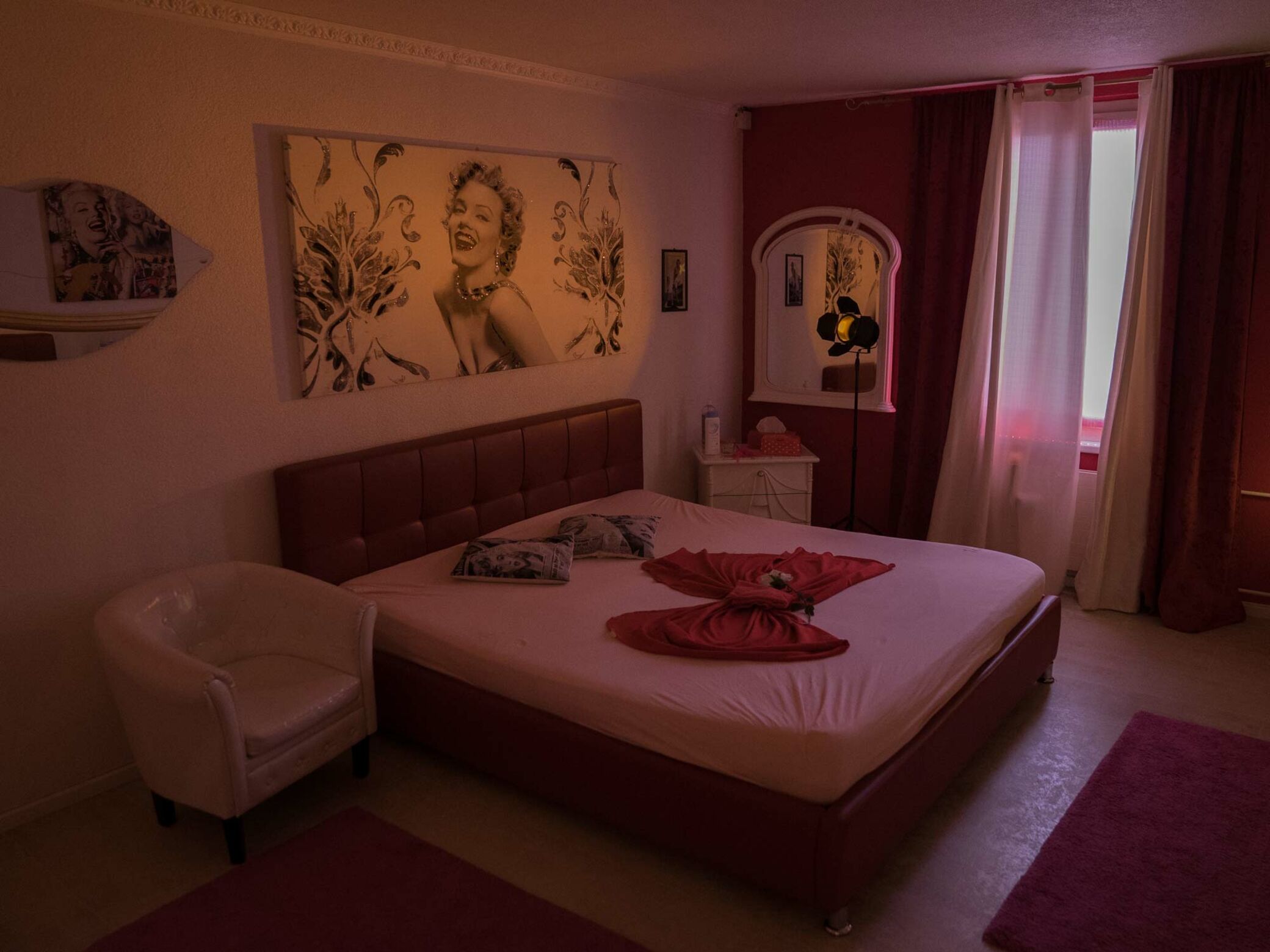 per cent is the amount of profit made by Mona and her business partner.

But Mona isn’t trying to sugar-coat things, she knows it’s a tough job. Not every client is courteous and well-groomed, and then there’s the mental and physical strain that many outsiders don’t want to imagine.

‘But I’m not a pimp who exploits girls.’ After deducting rent, wages, social security contributions, advertising and other expenses, she and her business partner make about 5 per cent profit.

The third floor is a man-free zone – this is where the girls live. For Mona, it’s important that ‘her girls’ feel safe and at home. On their birthdays, she gives them a gift and a cake. ‘I treat my girls with warmth and affection, which often surprises them.’ That’s because they have often been hurt in the past and never even received a gift from their own mothers.

Clack, clack – a woman with wavy brown hair comes into the kitchen and heads towards a drawer. She asks Mona for permission before taking out some pills. The brunette totters off, her backside wobbling in its wisp of fabric. High heels and sexy lingerie are part of the brothel’s dress code. Above the fridge, a monitor is linked to a video camera at the entrance.

Sometimes Mona bars them altogether, such as when clients make sex videos or claim their money back because they didn’t climax.

Men who behave inappropriately are immediately shown the door. Sometimes Mona bars them altogether, such as when clients make sex videos or claim their money back because they didn’t climax. These situations are not uncommon: ‘The art is in lovingly and sensitively pointing out the rules to our guests.’

Mona adds that the girls also need to demonstrate a little sensitivity: ‘They have to find out what their client wants in the space of a few seconds. Clients can be between 18 and 80 years of age, and many men come to Eden because they don’t get what they want at home.’

She says she sometimes feels guilty, but the majority of her clients are single. Mona always has a sympathetic ear for ‘her girls and boys’. First, she asks the prostitute whether the client treated her with respect. Then she thanks him for visiting Eden. ‘A lot of men tell me their personal problems,’ she says – unlike her girls, who generally prefer to keep their troubles to themselves. But the madam has a good feel for what’s going on. Whether it’s issues with drugs or pimps, Mona tries to help by talking to them: ‘My work here is important, and I take it seriously.’

But despite Mona’s warm heart and the family atmosphere, I find the atmosphere somehow jarring. Is it because of the girls’ untold stories?

Eden is a world of its own, a light-hearted place where men come to enjoy a brief respite from the daily grind. But despite Mona’s warm heart, the family atmosphere and homey furnishings, I find the atmosphere somehow jarring. Is it because of the girls’ untold stories? Maybe I have been overwhelmed by all these new impressions. I need time to digest them.