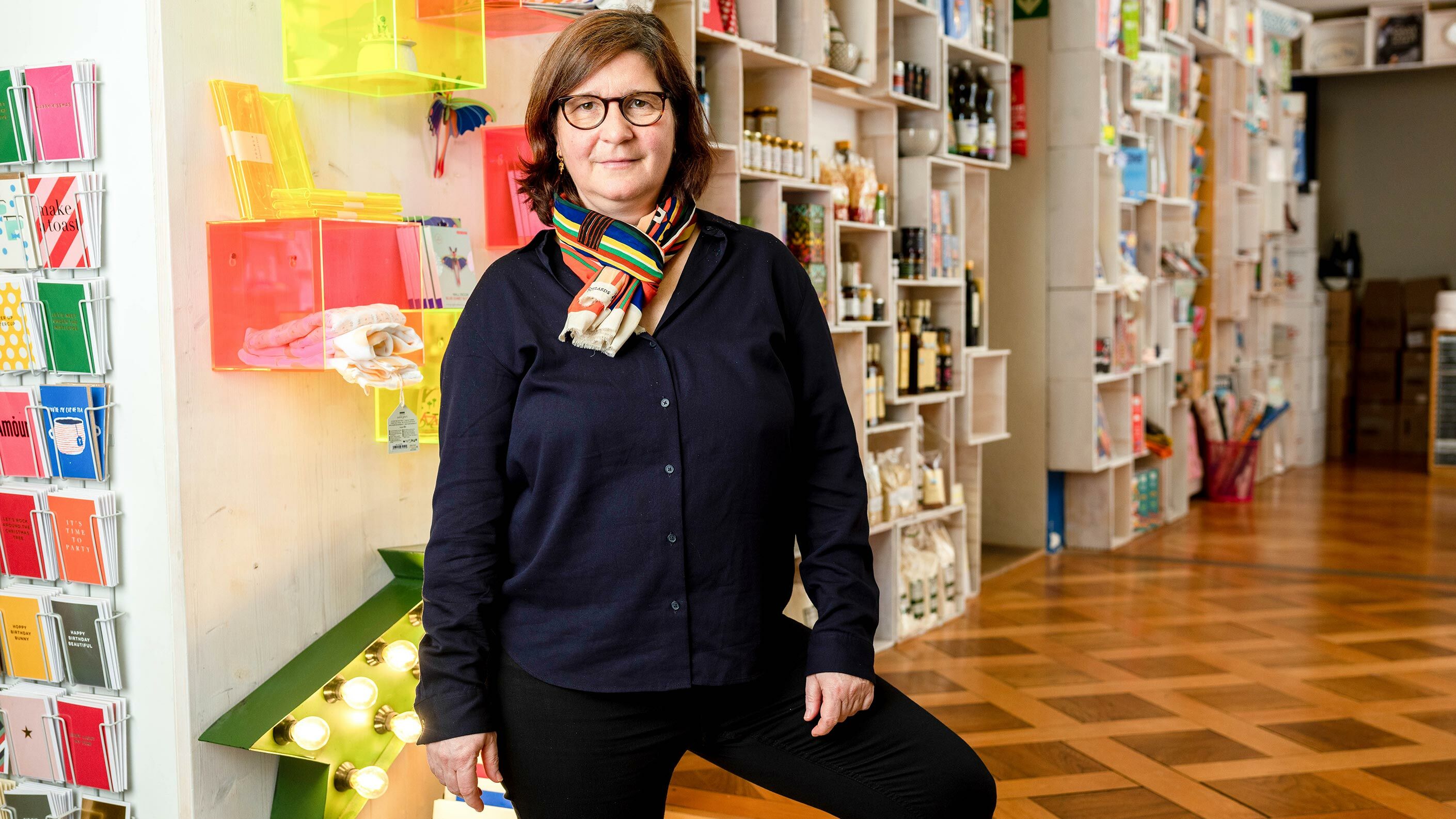 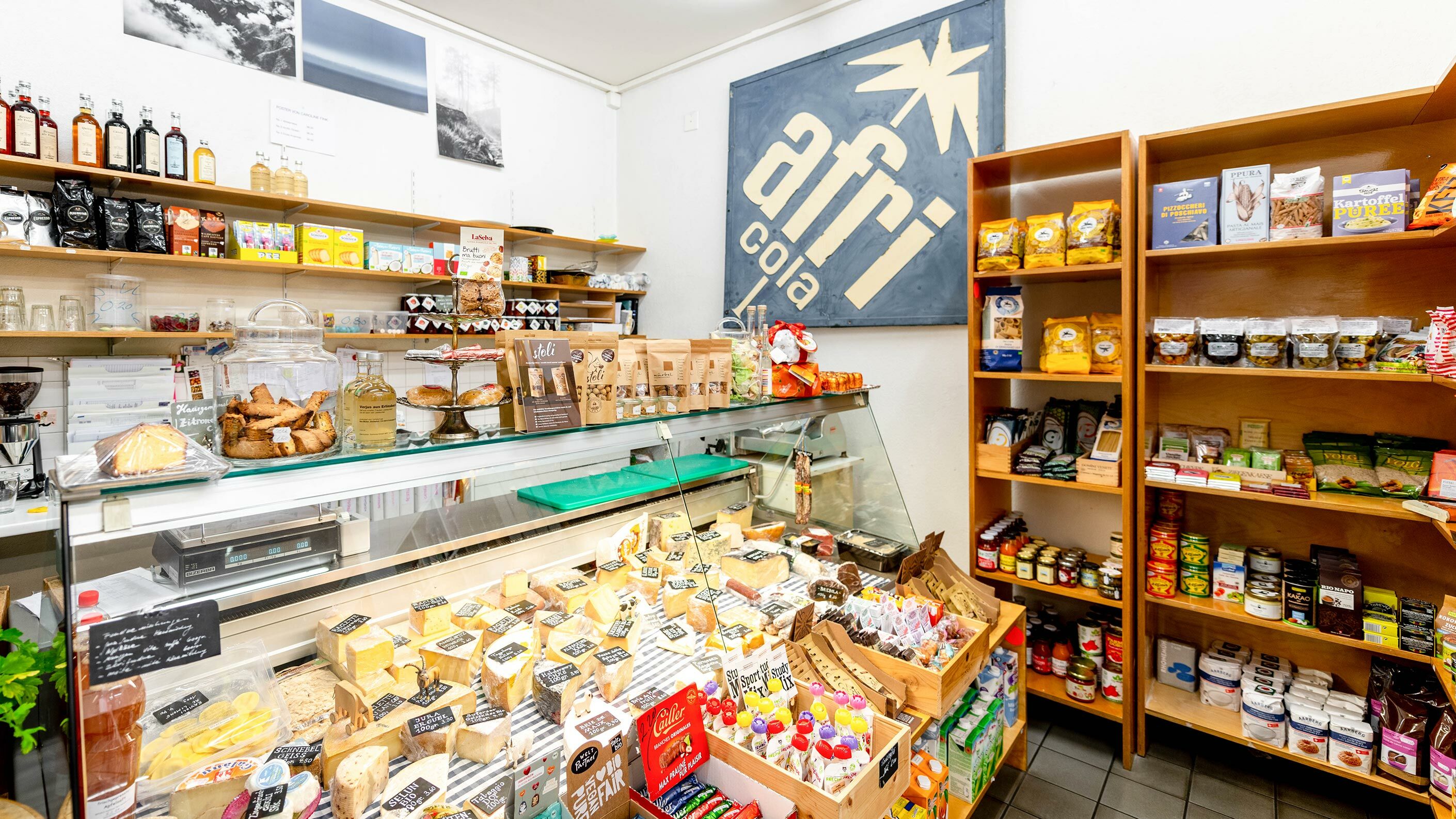 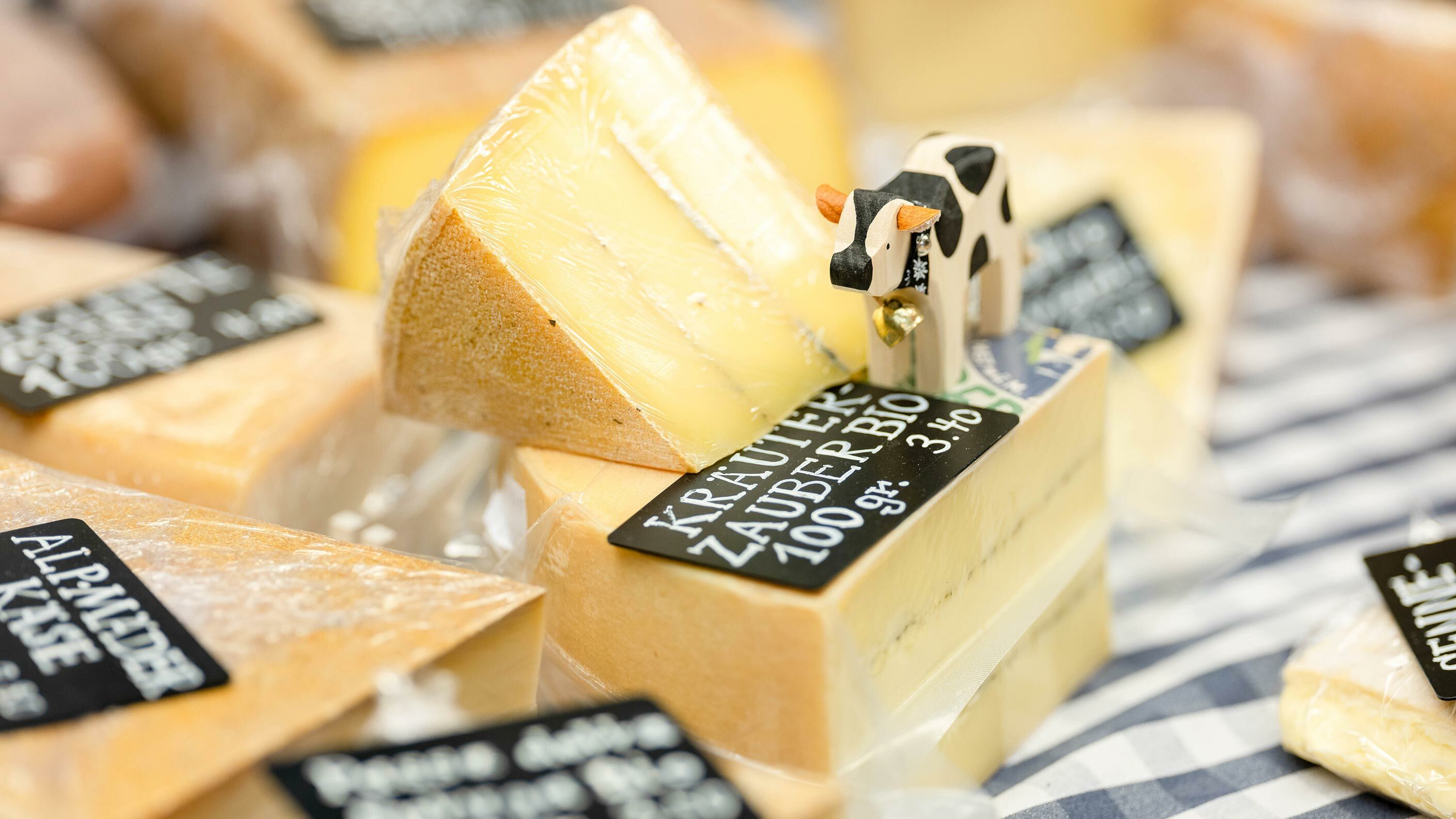 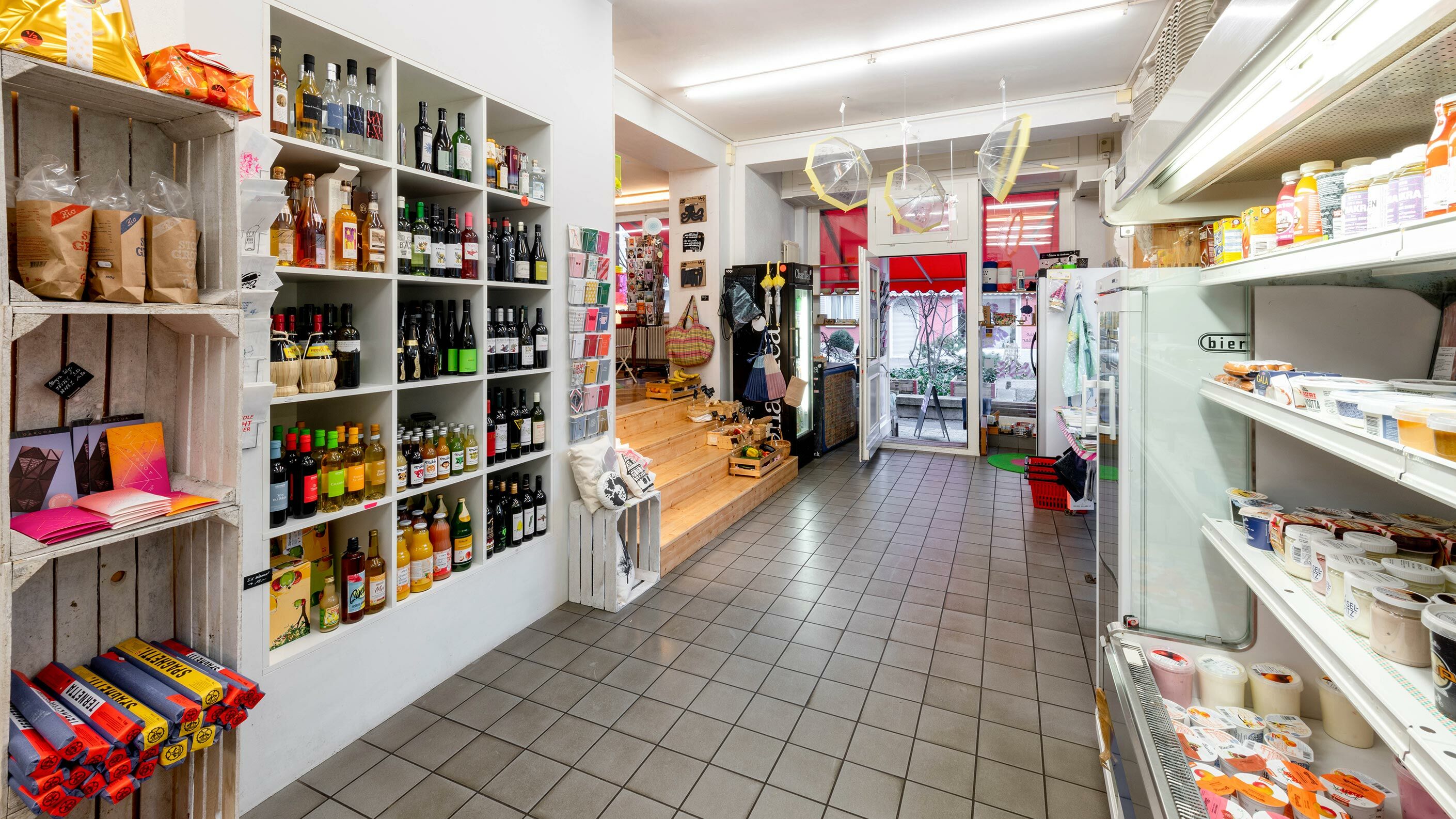 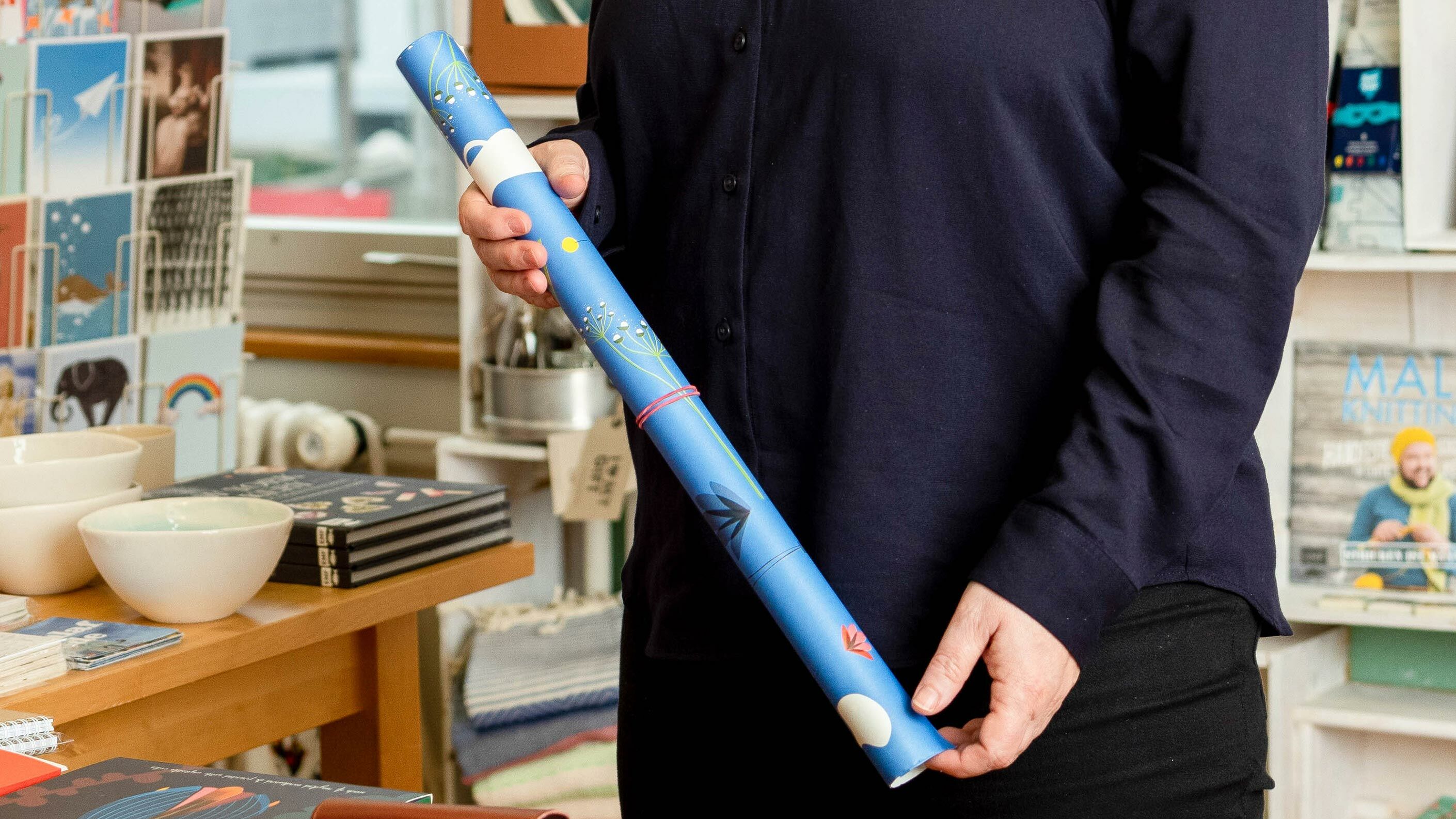 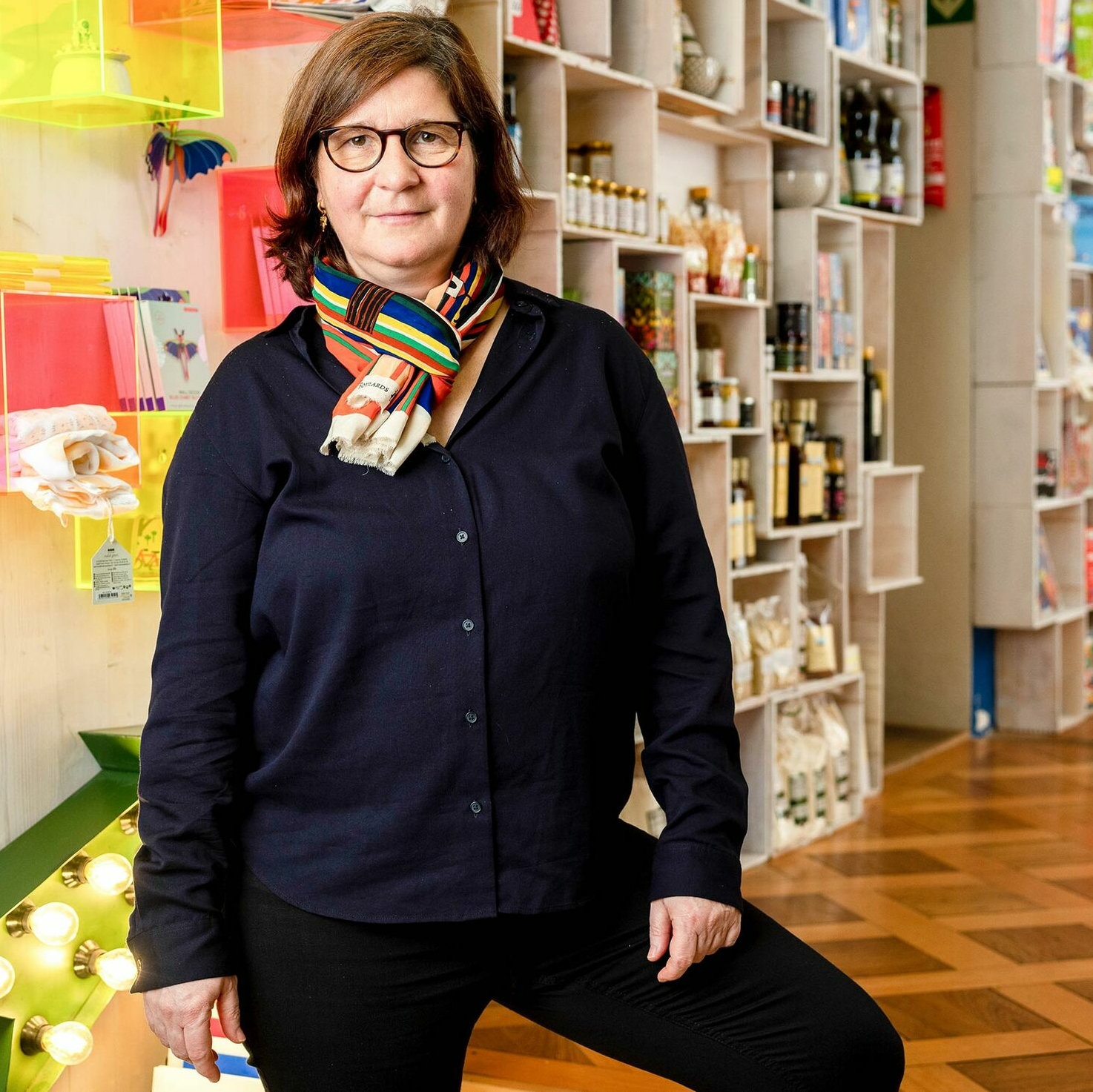 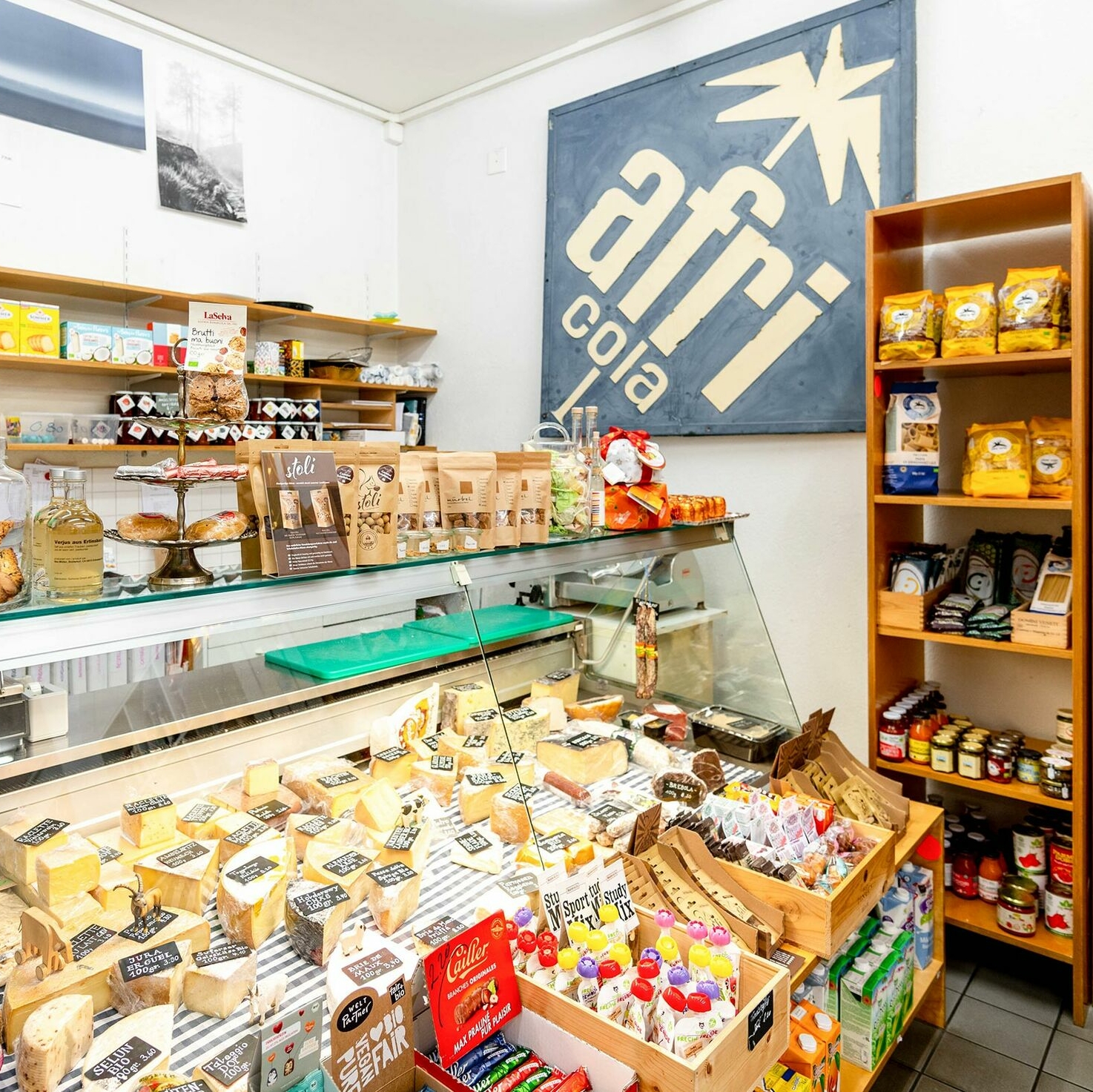 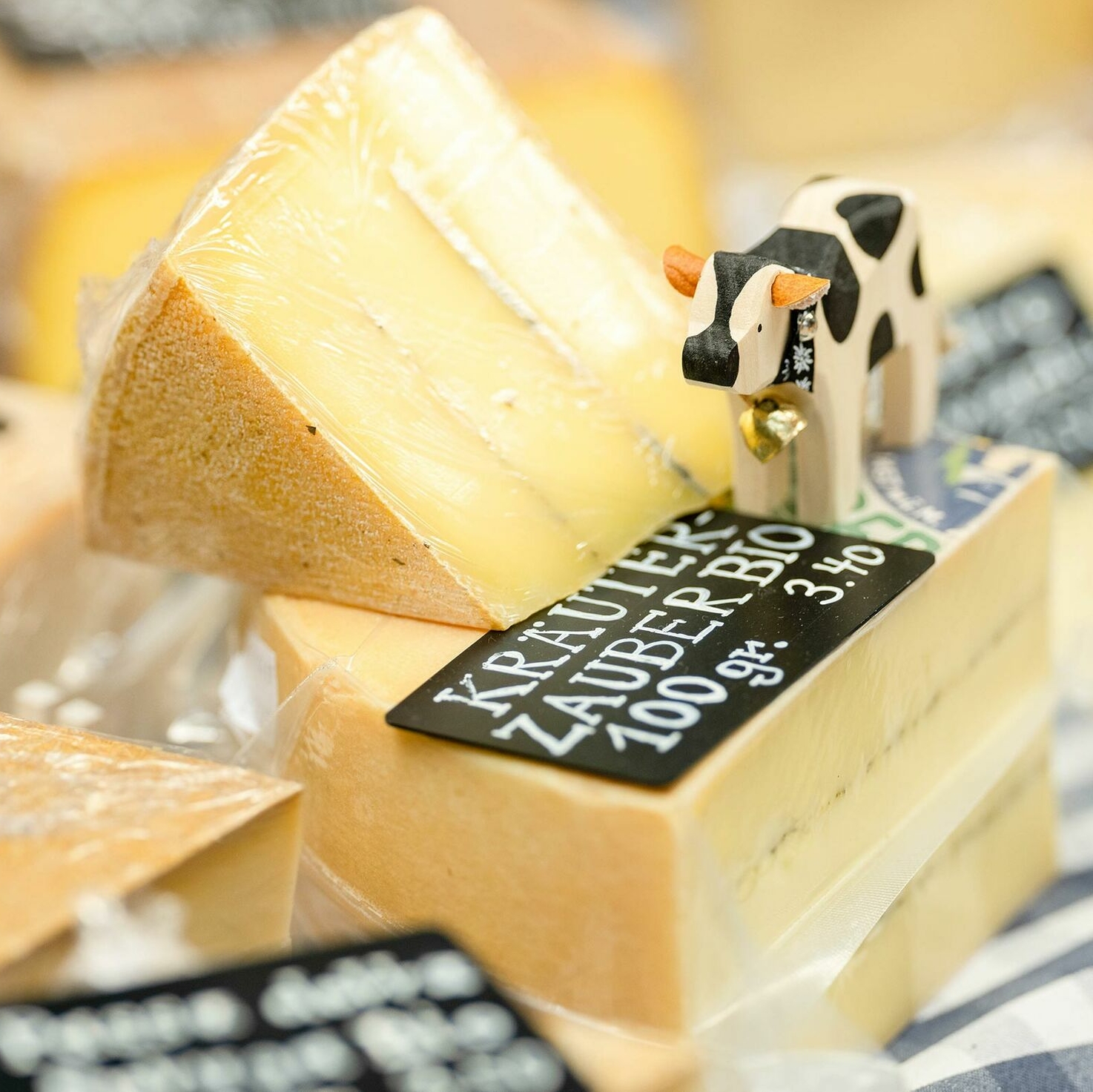 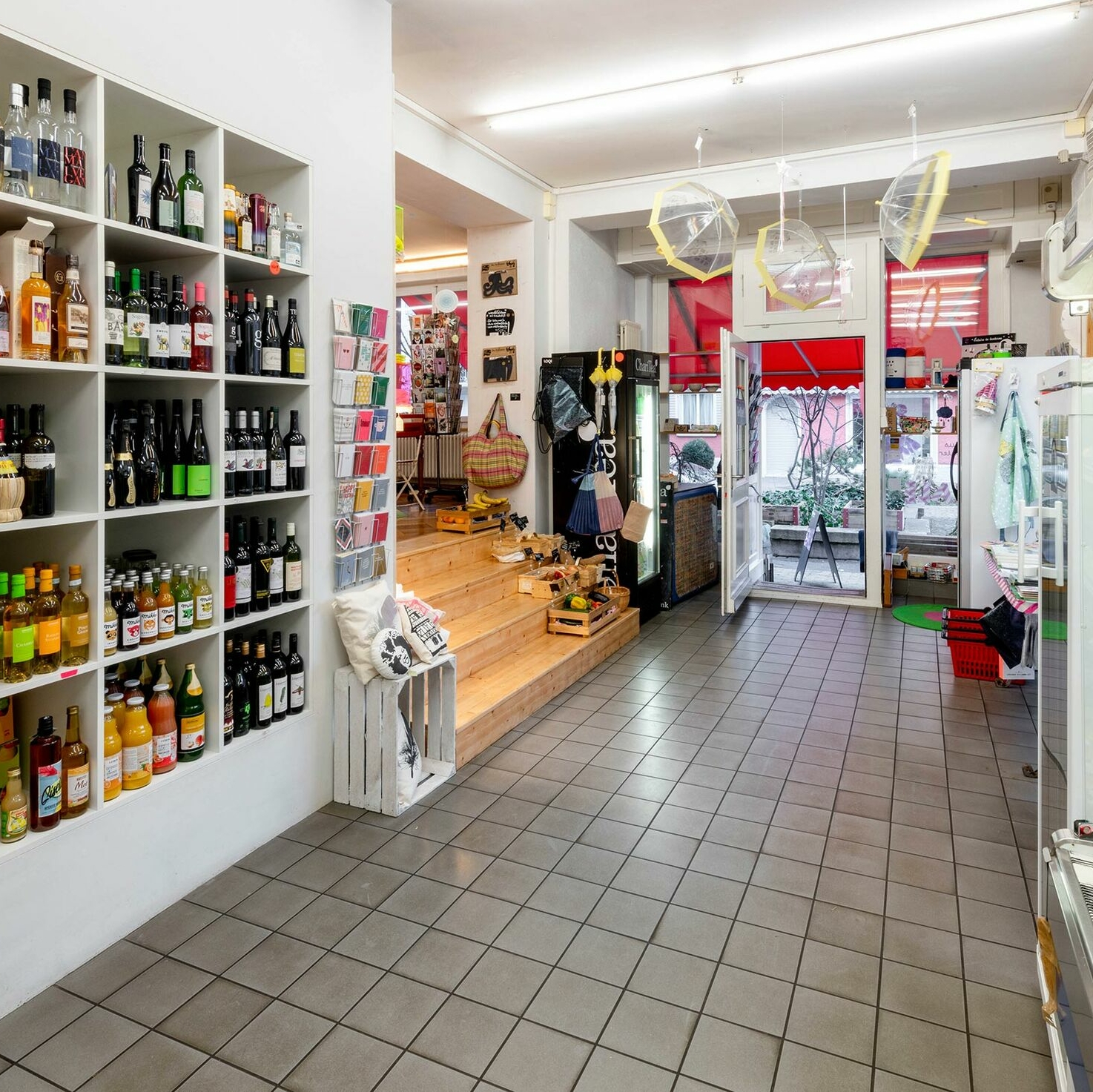 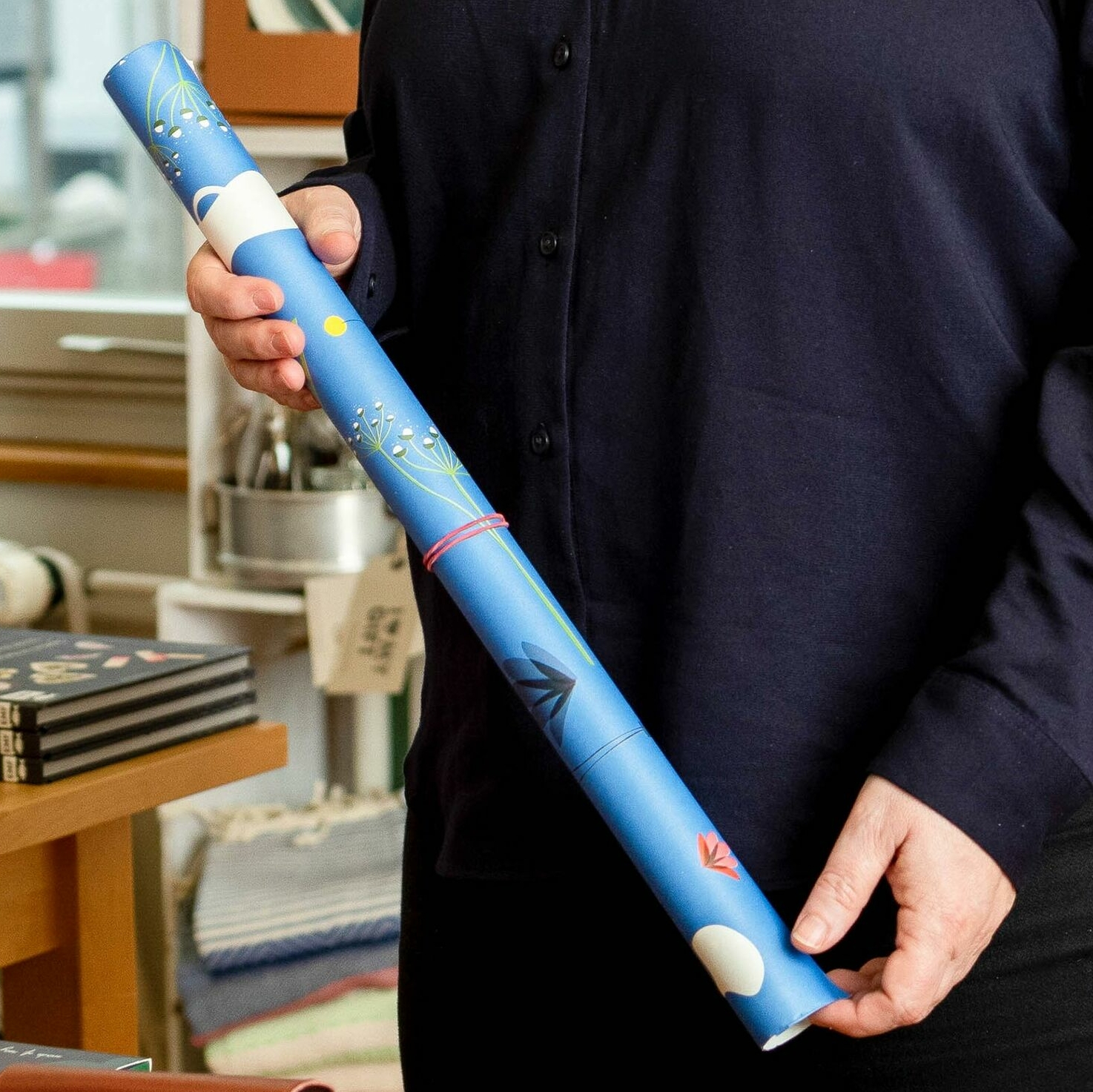 Syl Betulius and her team sell food and selected boutique items at her shop, Betulius & Töchter. But this local store in district 3 is first and foremost a meeting place – with an eventful history.

Couples, singles, families – half the neighbourhood shops at Betulius & Töchter. Children often come in on their own because their parents know they’ll be safe here. Syl laughs: ‘They proudly hand me the shopping list and we find everything together.’ She knows most of her customers by name. ‘Older people also like the shop because they sometimes feel overwhelmed by the huge range of products and the escalators in big supermarkets.’

Just recently Syl bought some new items at a trade fair in Paris.

Betulius & Töchter has all the essentials, plus a little bit more: ‘People often call in to pick up things they forgot during their last big shop,’ says Syl. These typically include milk, bin bags and toilet paper. But some people do their weekly shop at Betulius & Töchter: ‘They don’t want to support the big retailers.’ Some customers are very conscious shoppers who examine everything closely and want to know where the products come from. Demand generally varies depending on the day of the week: bread from the John Baker bakery is always popular, and people often shop for brunch on Saturdays, when Syl sells a lot of cheese. She also tends to sell more wine and beer at weekends.

People often come to Betulius & Töchter specifically to buy a gift: ‘I love finding new products for the non-food area,’ says Syl. Betulius & Töchter hasn’t always sold these kinds of boutique products as there wasn’t enough space until the shop was renovated in 2009. At first, many customers found the mix of goods on offer a little strange, but now they appreciate it. ‘There are lots of reasons why someone needs a gift at short notice,’ says Syl. Expanding her product range has also allowed her to introduce local handicrafts. And just recently she bought some new items at a trade fair in Paris – including things that can’t be found anywhere else in Zurich.

She made this trip to the French capital with her eldest daughter, 21-year-old Lucy, who is studying film in Berlin. ‘She has even made a film about the store,’ says Syl with a smile. Whenever Lucy is in Zurich she helps out in the shop. Her 19-year-old sister Ruby is still in school but works here part-time – always on Friday afternoons and every second Saturday afternoon. Syl’s husband Arniko also recently started manning the counter once a week, so it’s a real family business.

In the name of the shop, Betulius stands for tradition while the daughters are all about the future.

Despite this, Syl says: ‘My daughters don’t want to take over the shop, they have other plans.’ But they are always happy to support Syl, make suggestions and encourage her to focus on certain things, such as sustainability, the product range, or replacing the old table outside the shop: ‘My daughters have a fresh perspective on things – something I’ve lost because I’ve been here so long. I really appreciate that.’ This is also reflected in the name of the shop: Betulius & Daughters. Betulius stands for tradition while the daughters are all about the future.

Syl’s eyes light up when she talks about her shop – it’s clearly her passion. Originally from Bern, she began her working life as a teacher. Later on, she set up and managed the video section in the Visual Design department in the faculty of Architecture at ETH, then worked in TV as an editor at SRF. Her time in the book trade provided her with sales experience, but she was still thrown in at the deep end in 2006 when she took over the shop, which had been in existence since the 1950s. ‘I certainly paid my dues,’ she says.

‘I want to do something for the neighbourhood.’

The shop was heavily in debt, so she had to order wisely and make sure she did her sums. ‘There were a lot of ups and downs. There were definitely times when I thought about selling up,’ she says. Paying off the debt was hard work. She and Christina Schreiber-Balasso – who left the shop in summer 2019 – organised countless events: lottery evenings, sponsored runs, auctions, concerts and flea markets, and even set up a Zurich-wide catering service. But their efforts paid off, and now the finances are on an even keel. The shop still hosts small events from time to time, either for a good cause or simply for the enjoyment of local residents.

But running the shop is a constant challenge: ‘Small shops always have a hard time. Every shop owner I know says the same.’ Betulius & Töchter only survives because Syl also draws on her educational background by taking on trainees. A number of young people have trained in the store, and the last two quickly went on to find permanent jobs. She currently has three trainees working for her: ‘When they come here, trainees do everything right from the start, they don’t just spend months stacking shelves,’ says Syl. The trainees learn in a kind of microcosm, where they deal with customers, place orders, and have a say in decisions. At the rear of the former apartment they bake cakes and cookies and make up sandwiches for the lunchtime customers.

Syl’s ethical principles are reflected in the products she sells: ‘I have to believe in a product and the company that makes it,’ she explains. She likes to know who she is dealing with and give small producers a chance: ‘I’m not looking to get rich with my shop, it’s about social engagement. I want to do something for the neighbourhood.’ In this age of online shopping when so many small shops are closing down, it’s extremely important to maintain a personal touch.

Toilet Duck was born and bred in Zurich