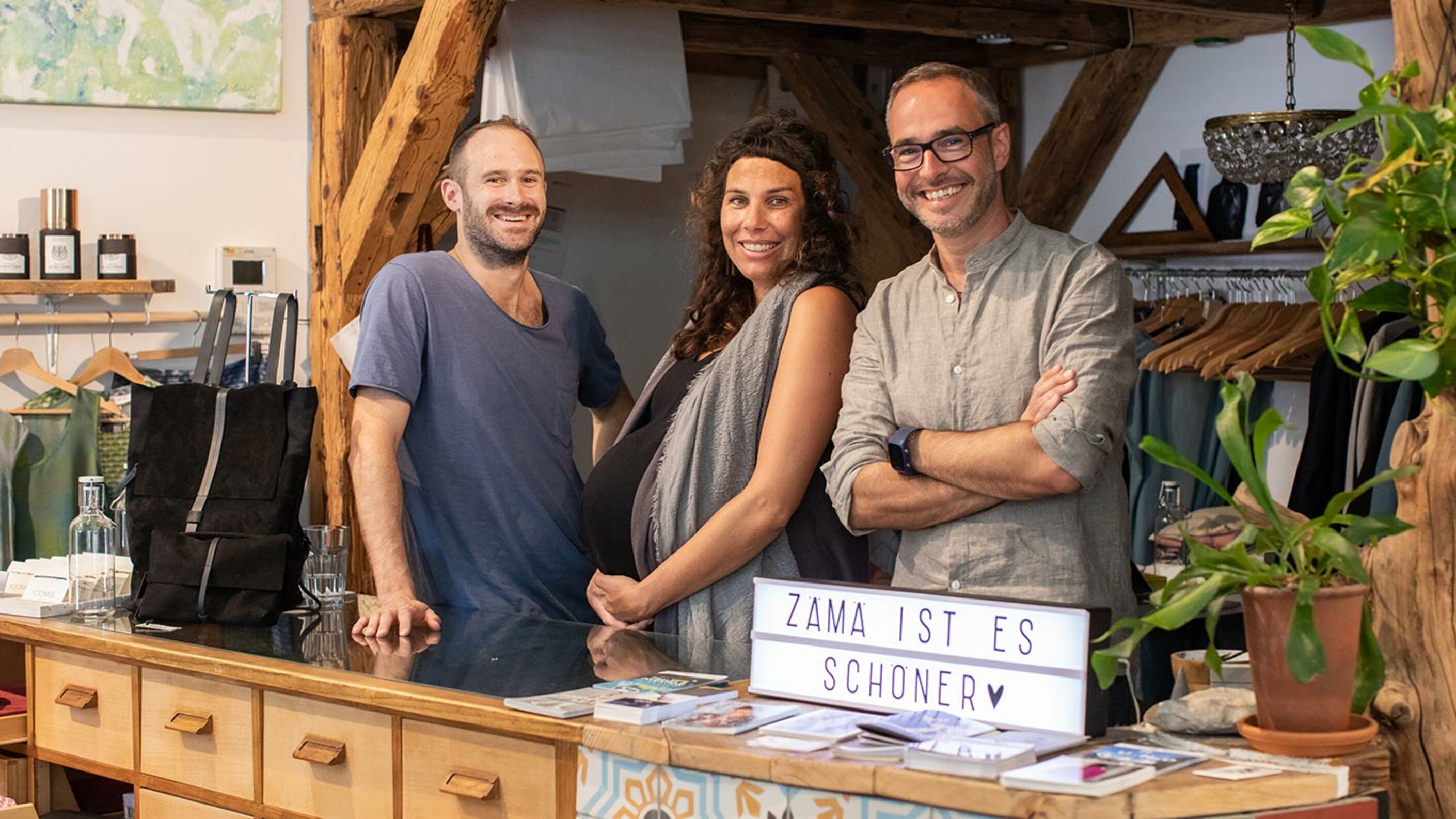 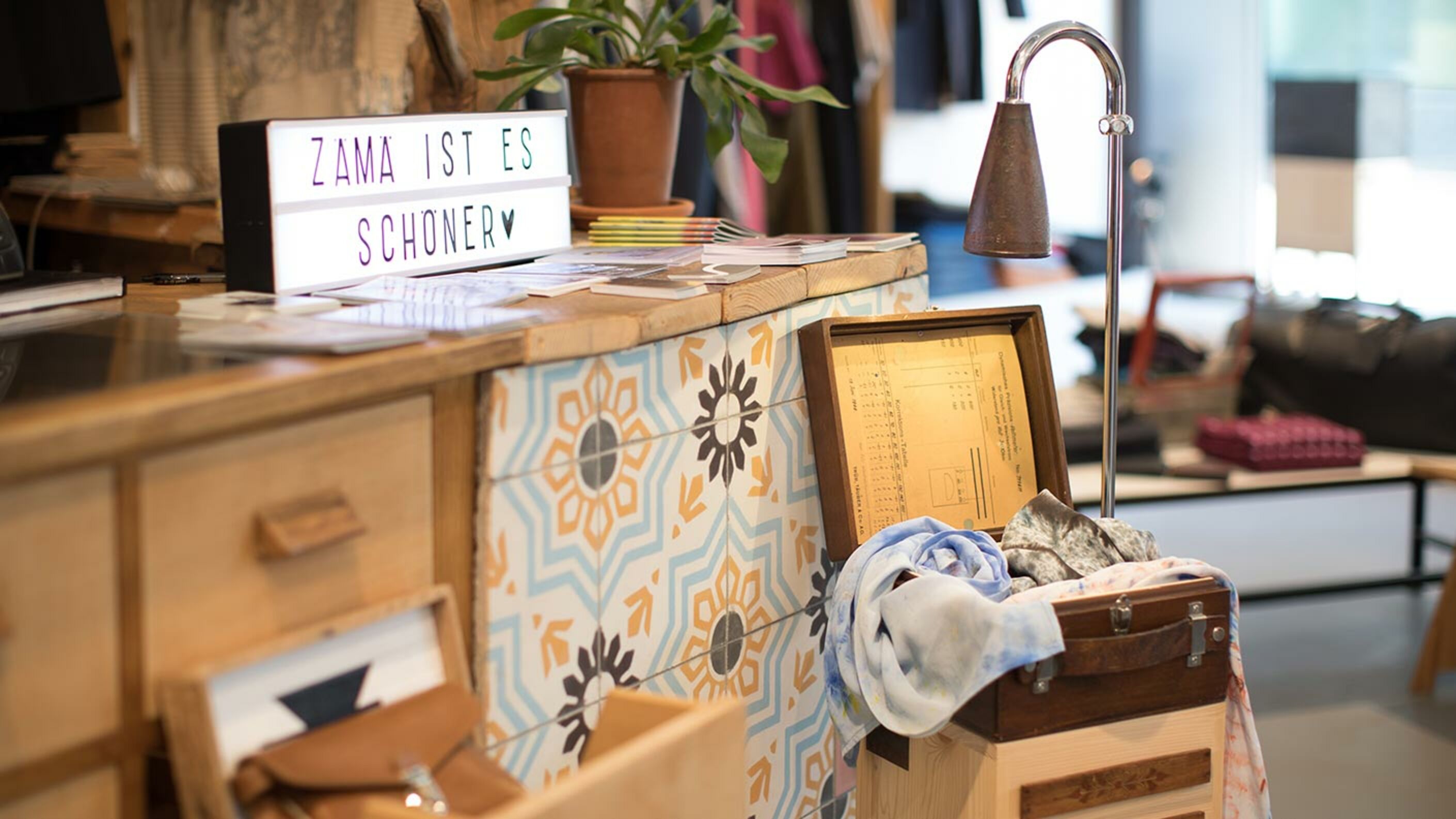 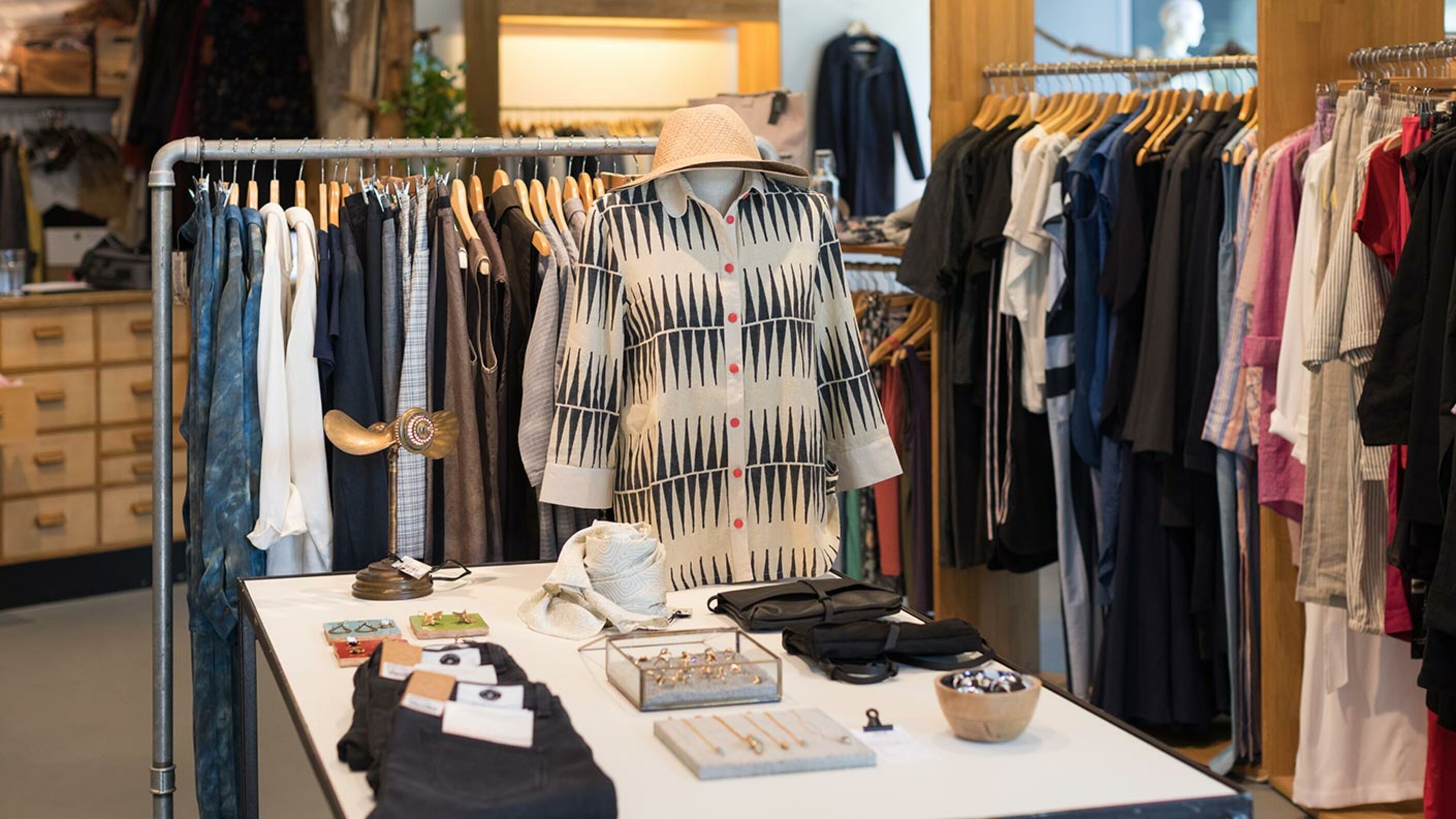 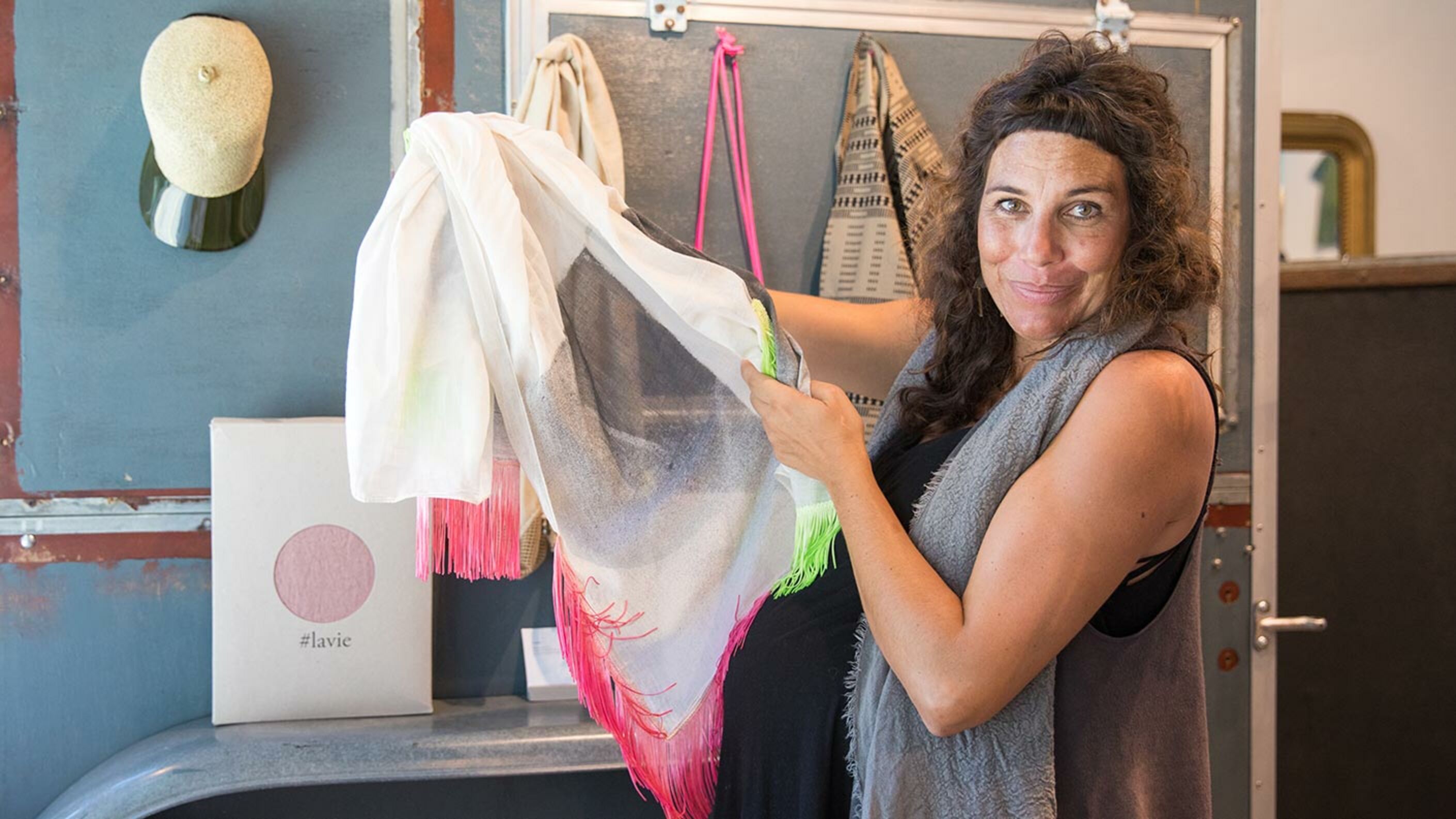 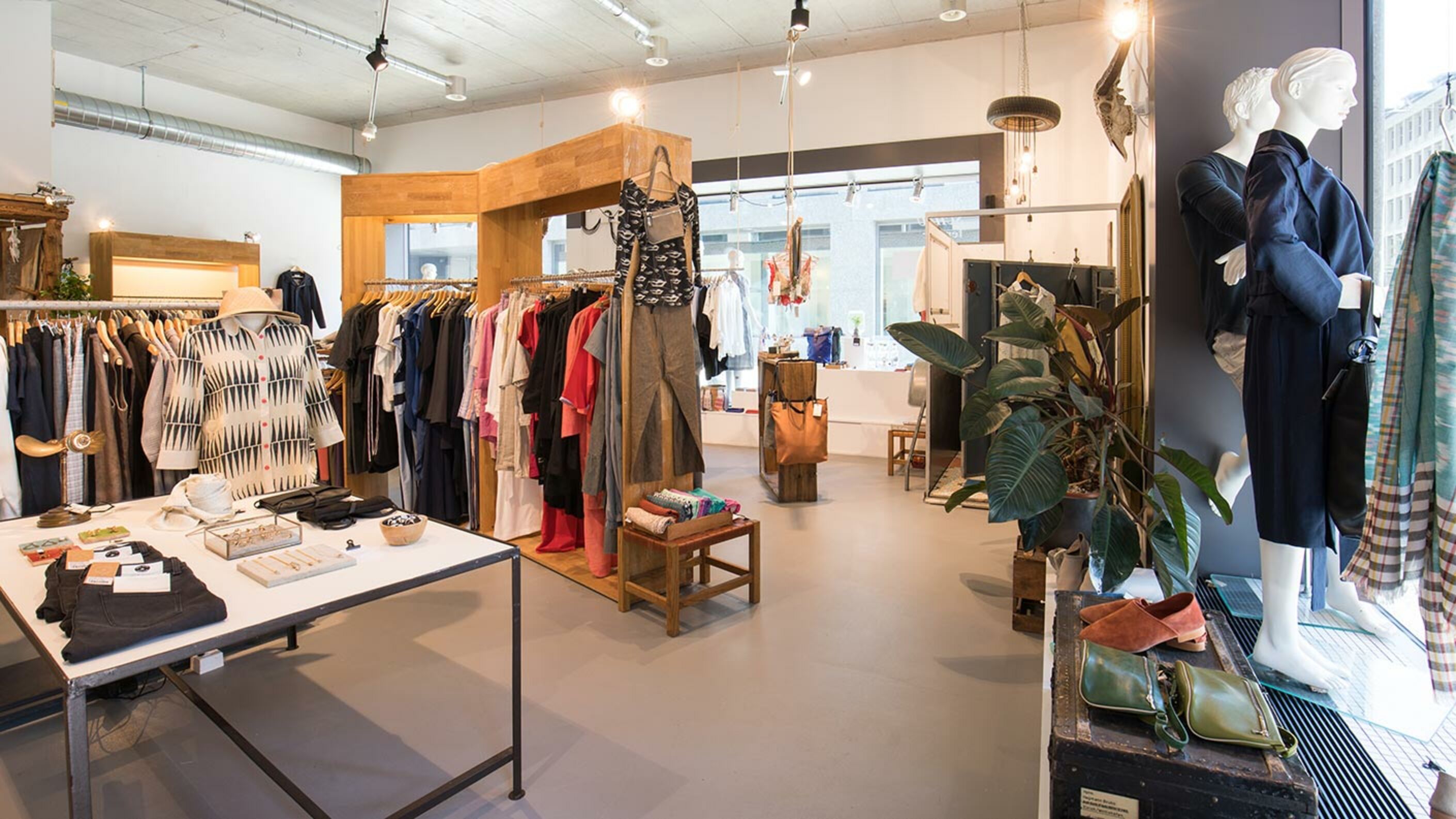 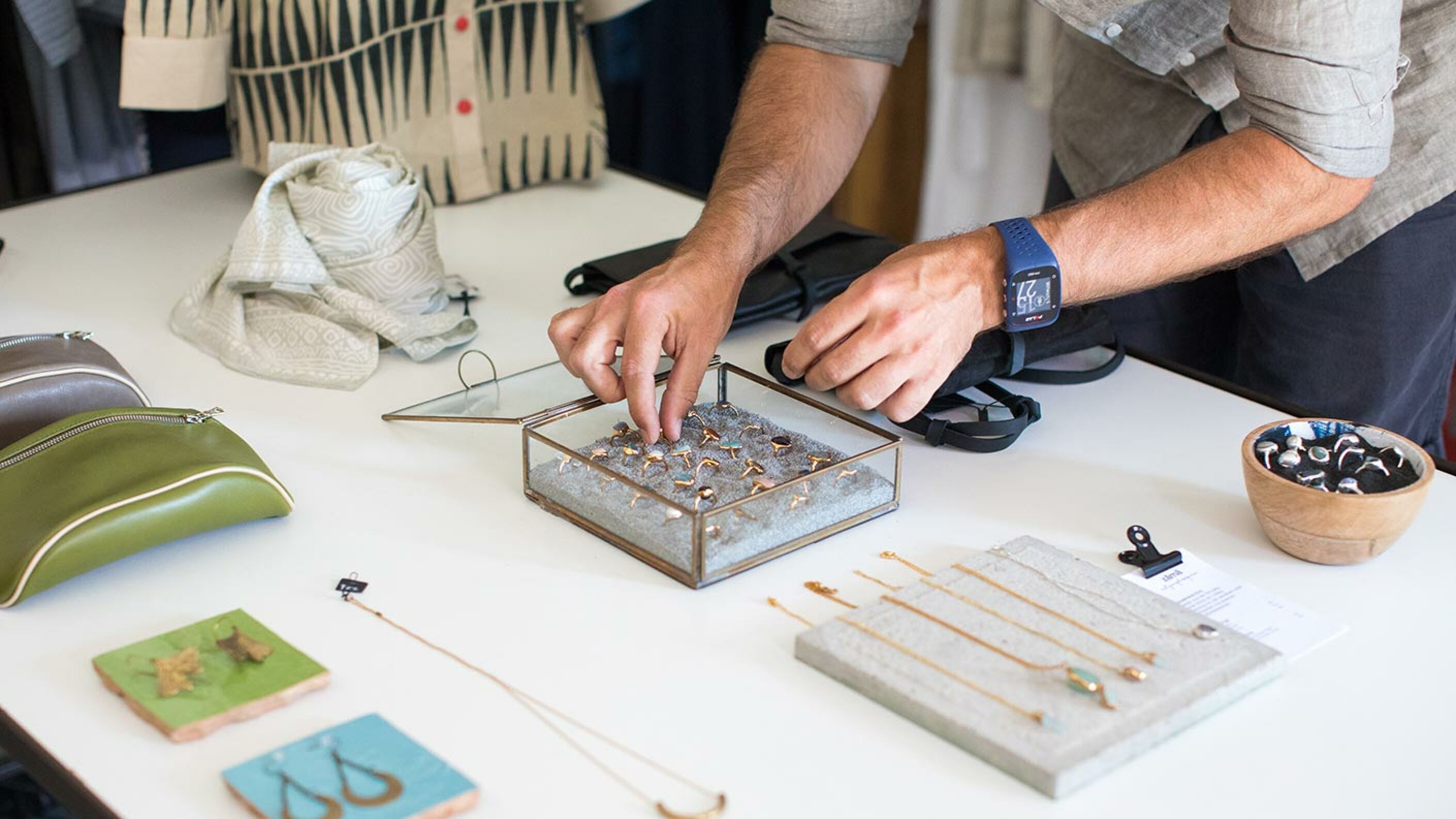 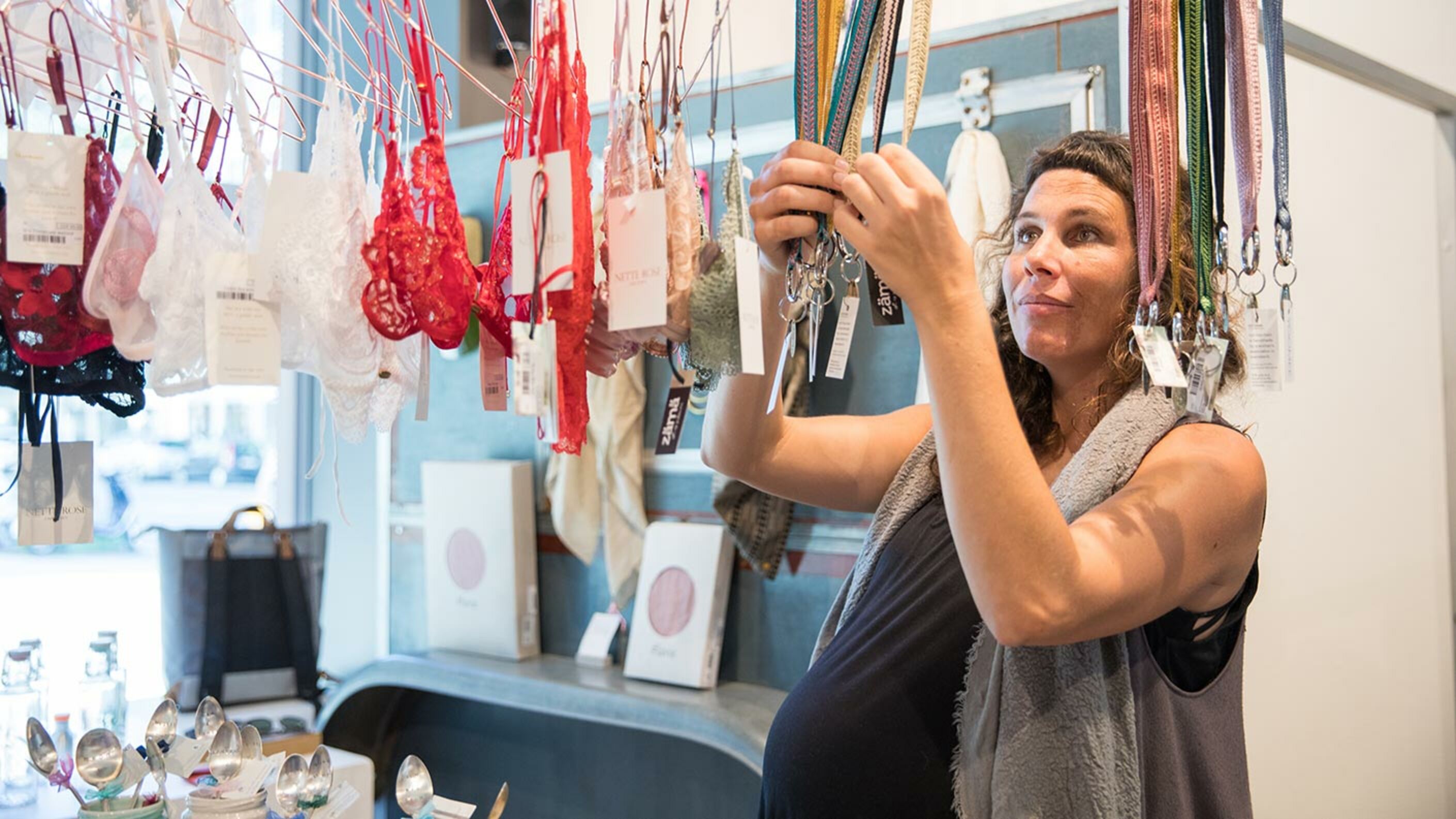 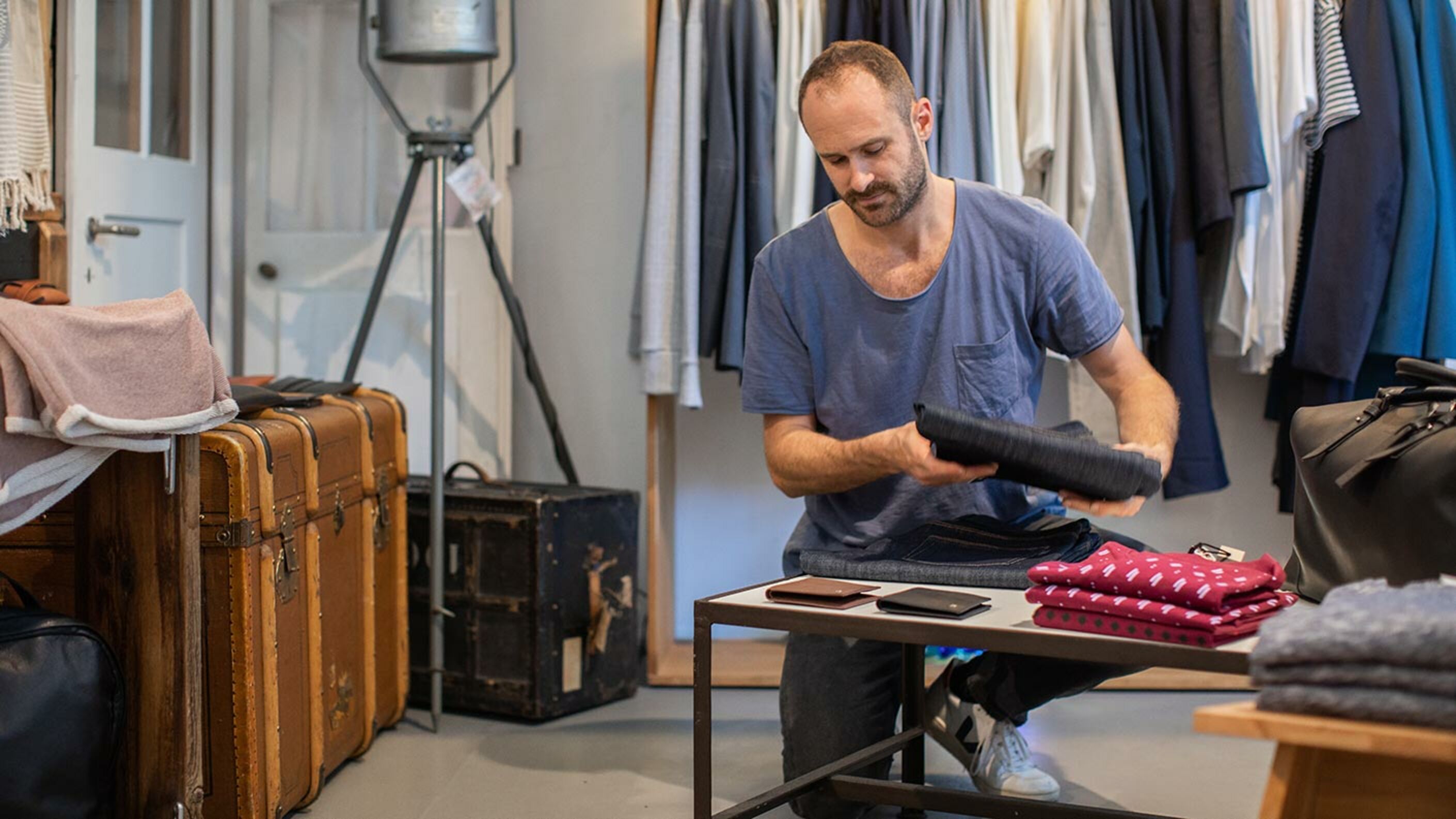 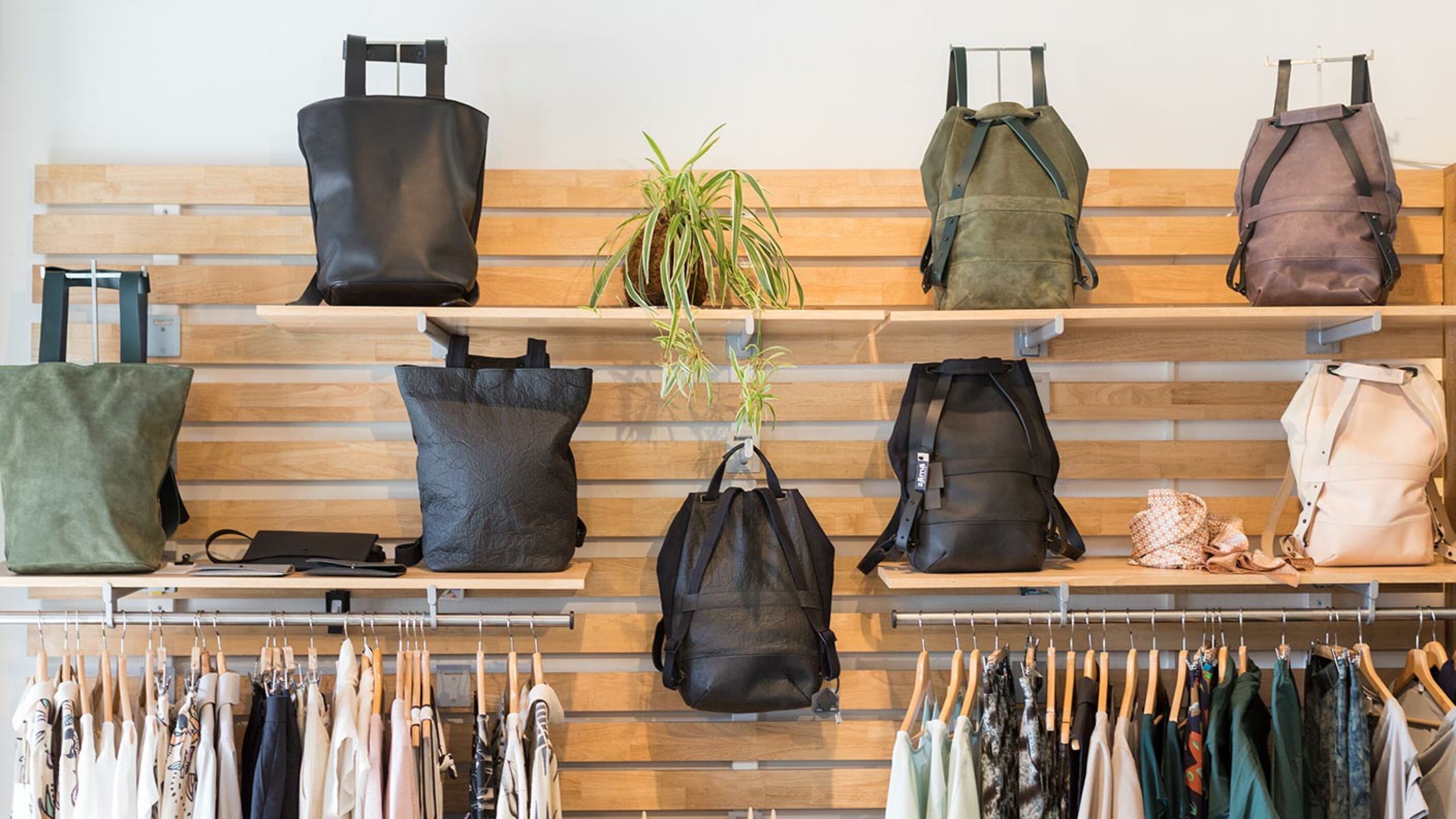 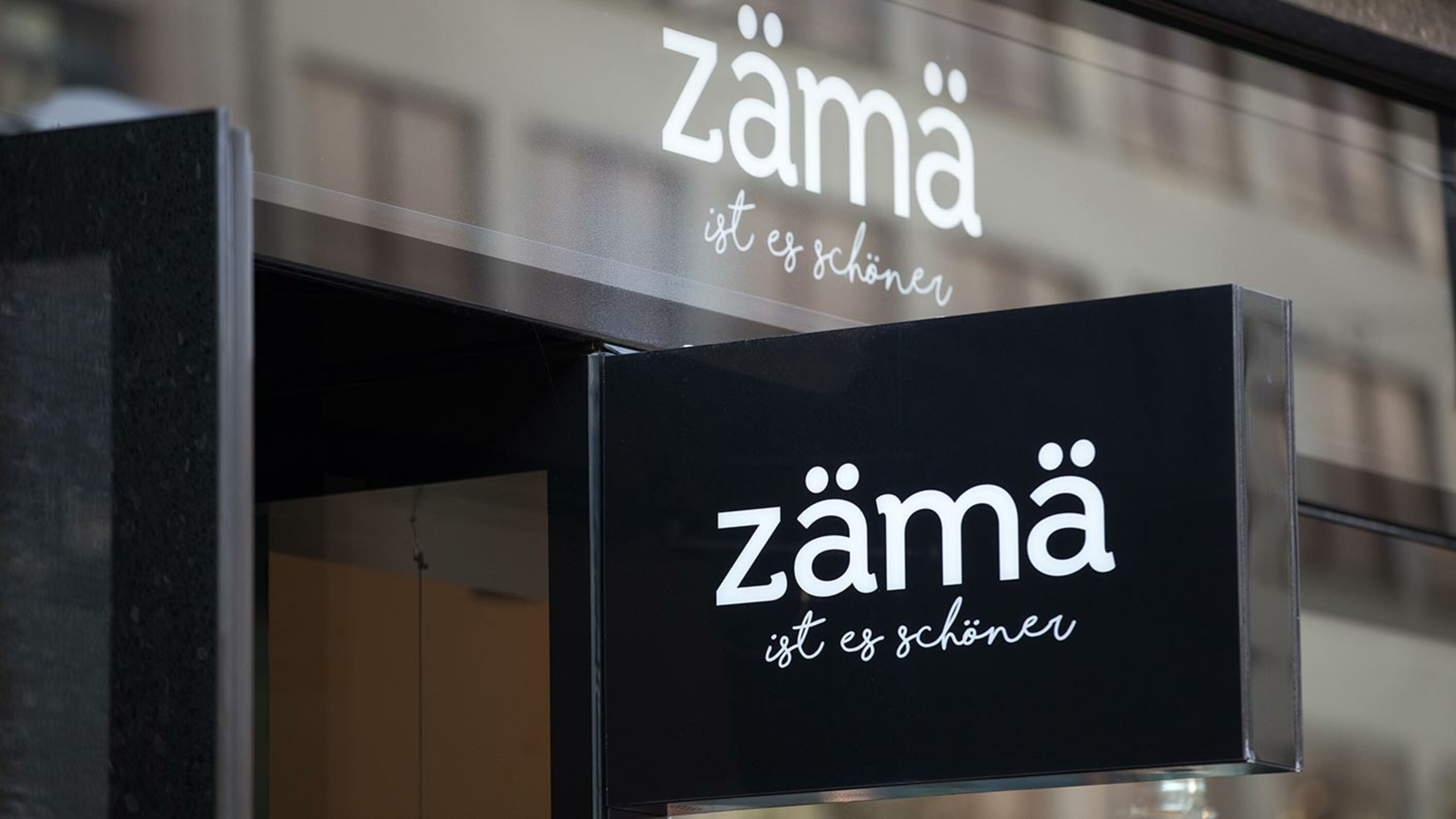 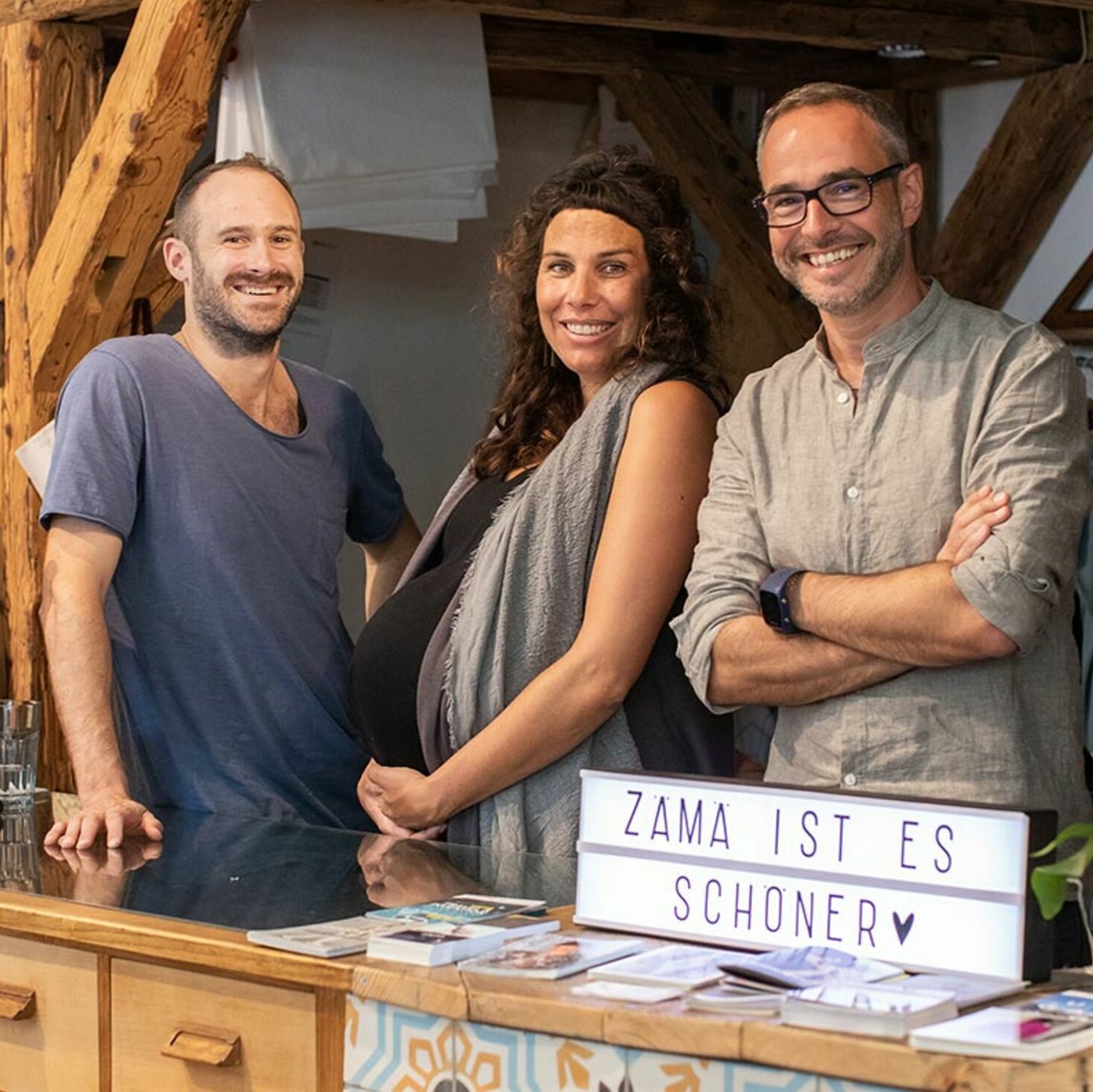 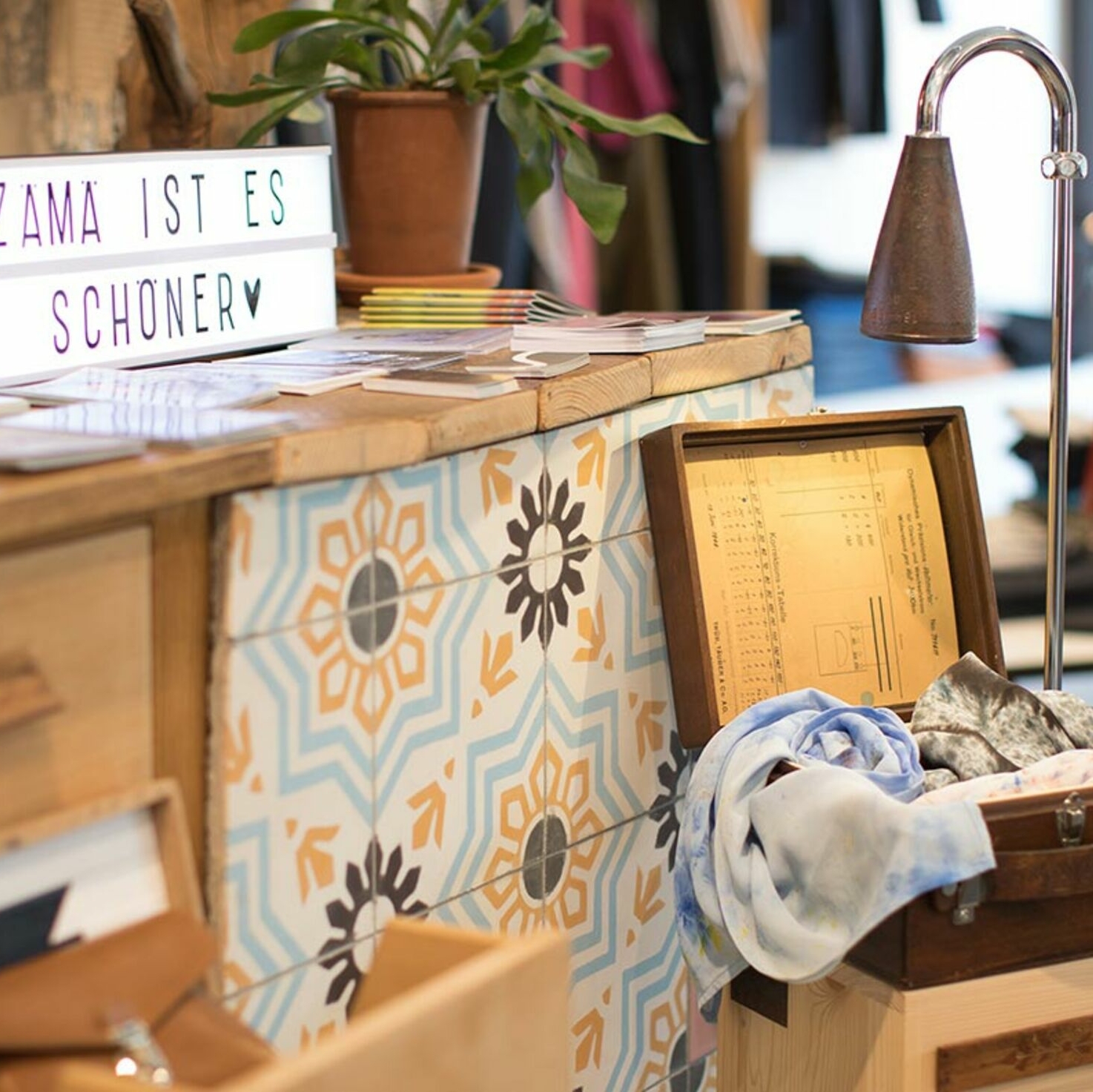 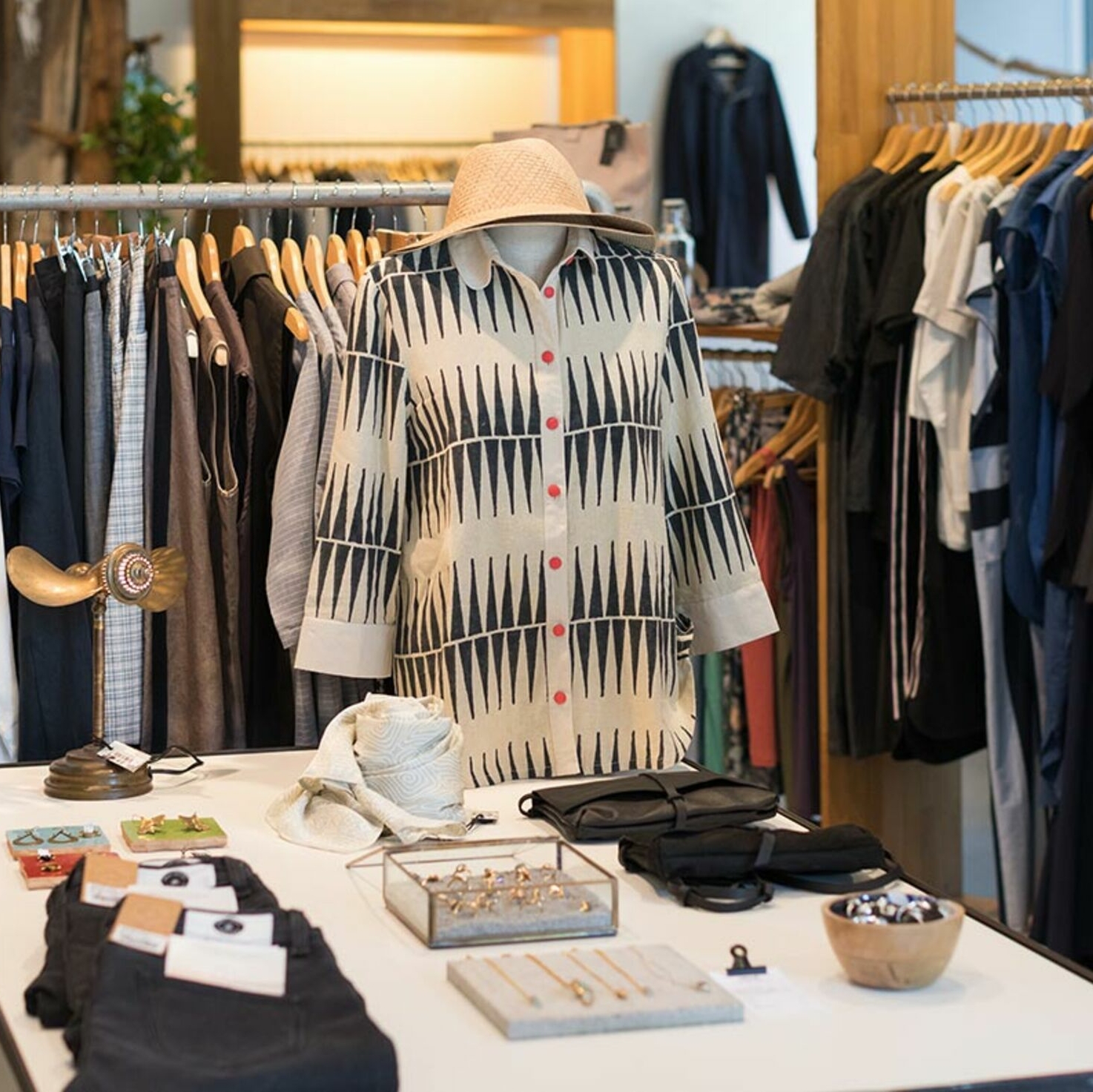 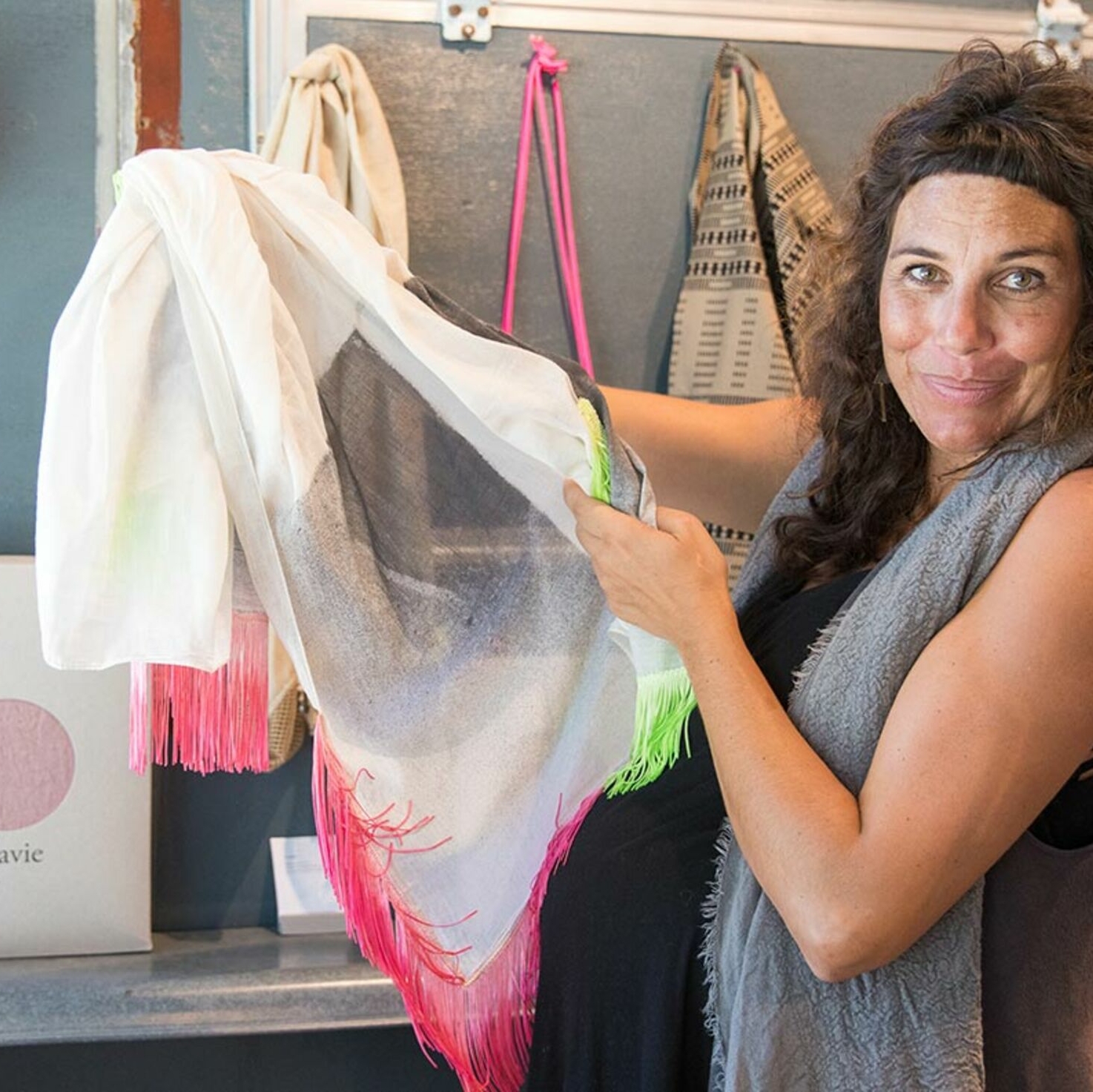 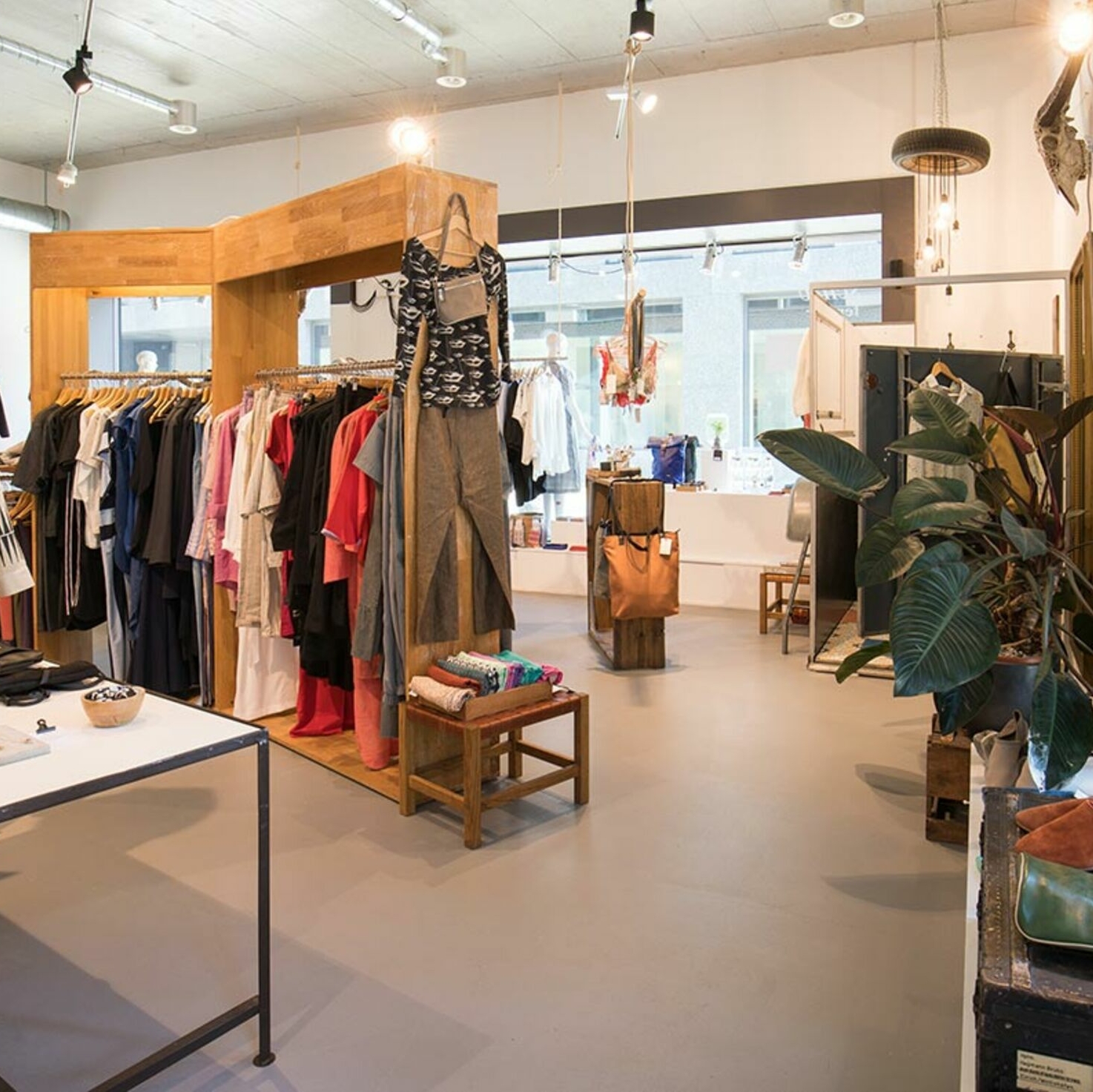 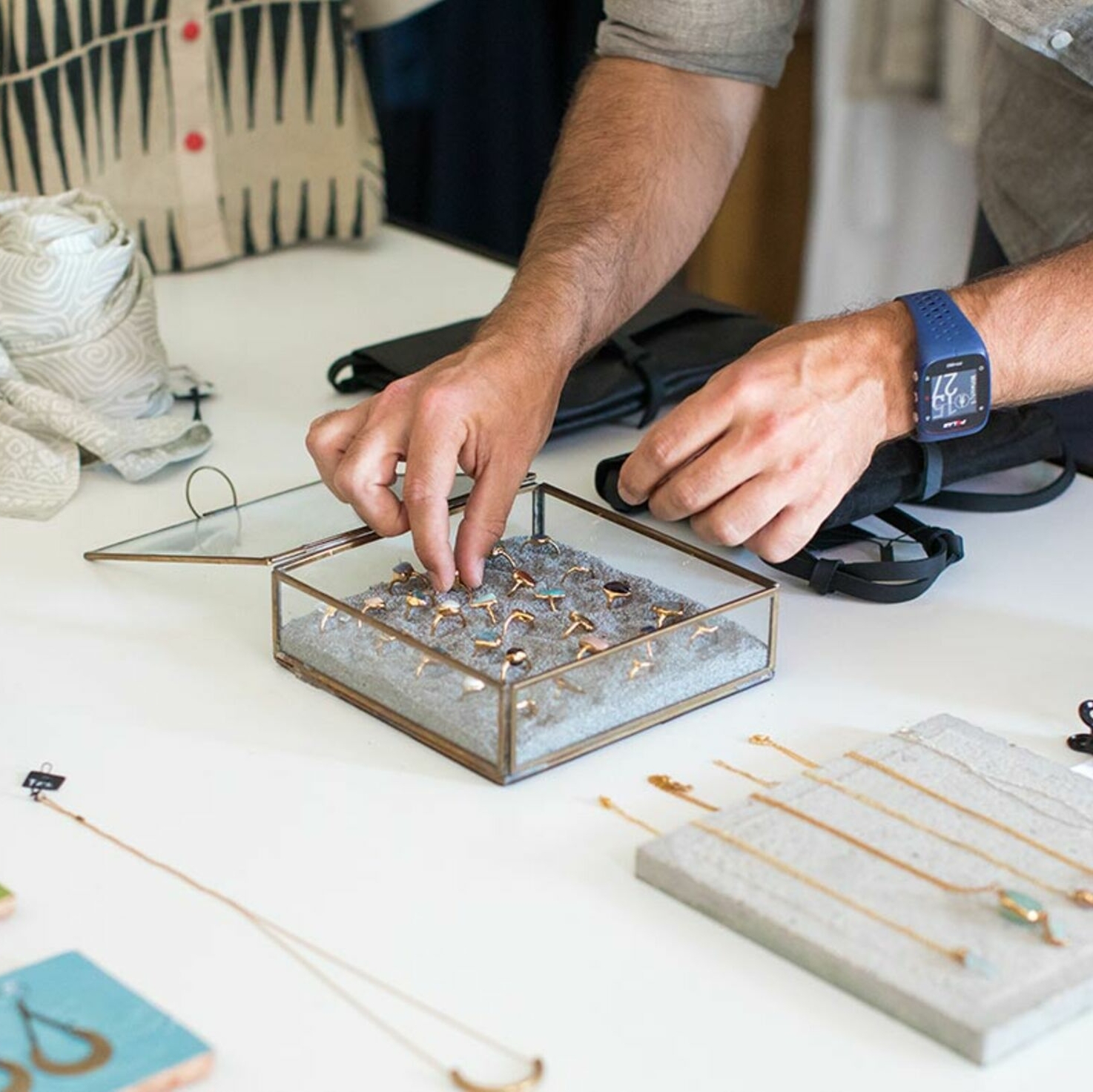 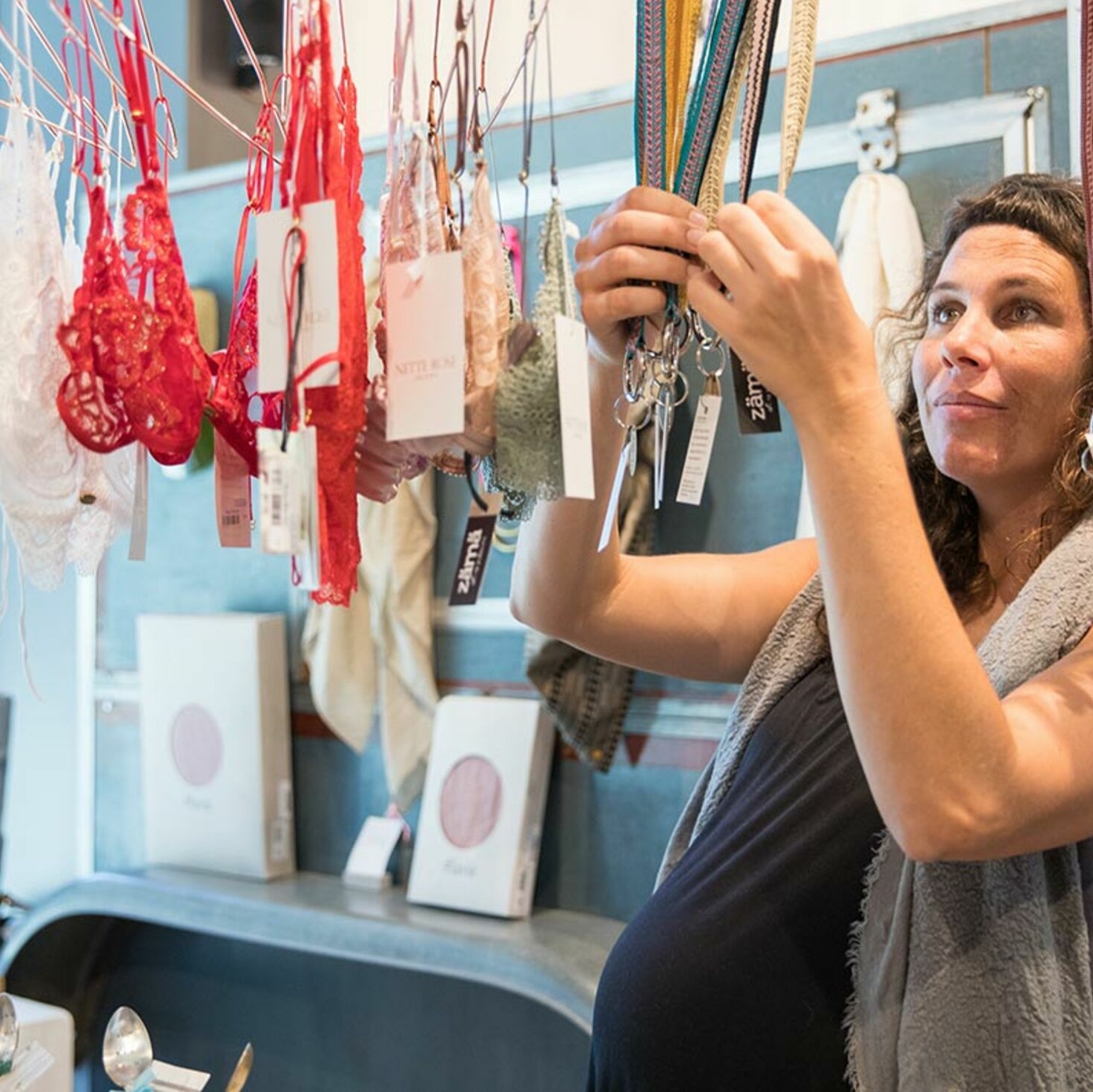 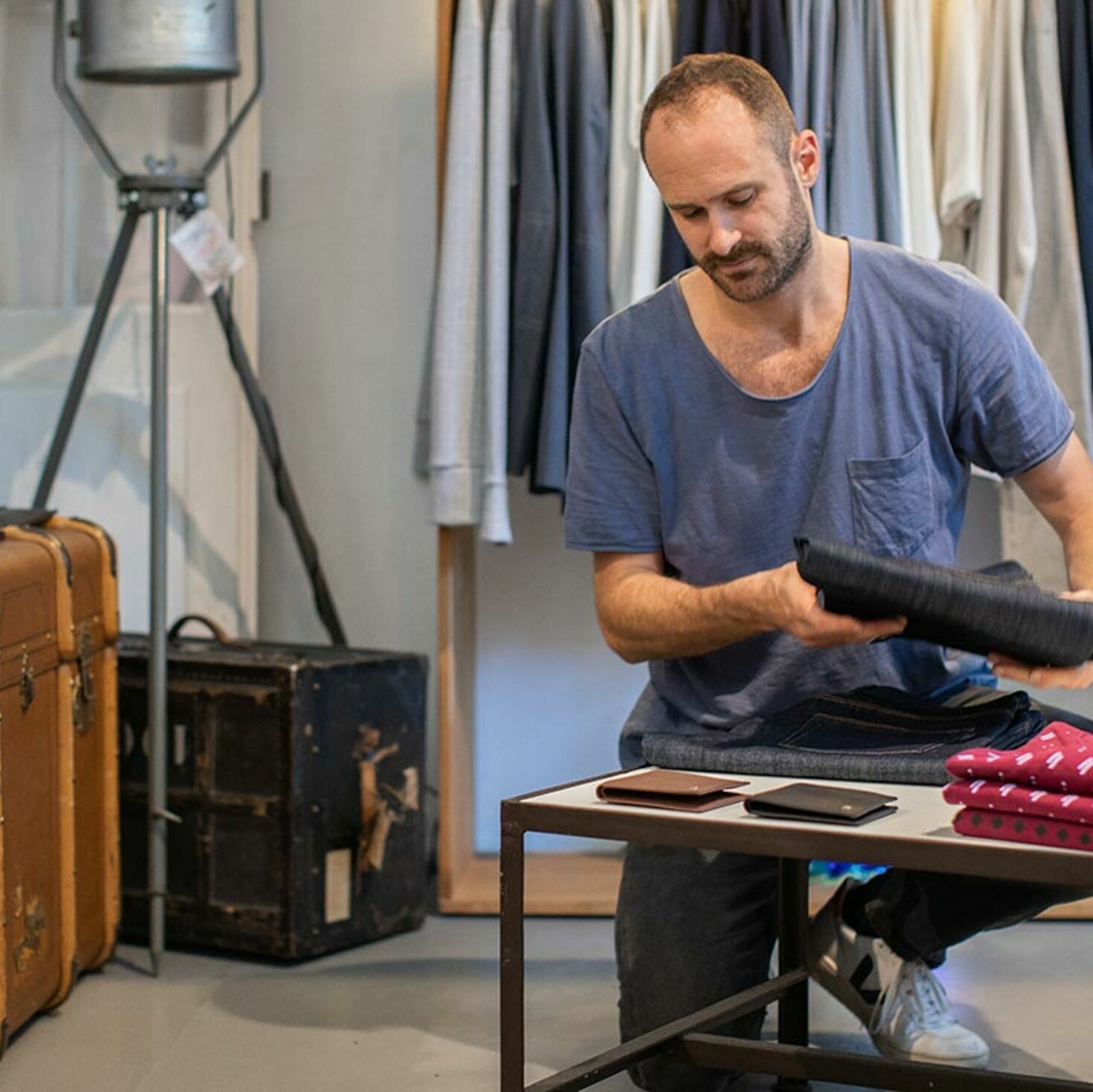 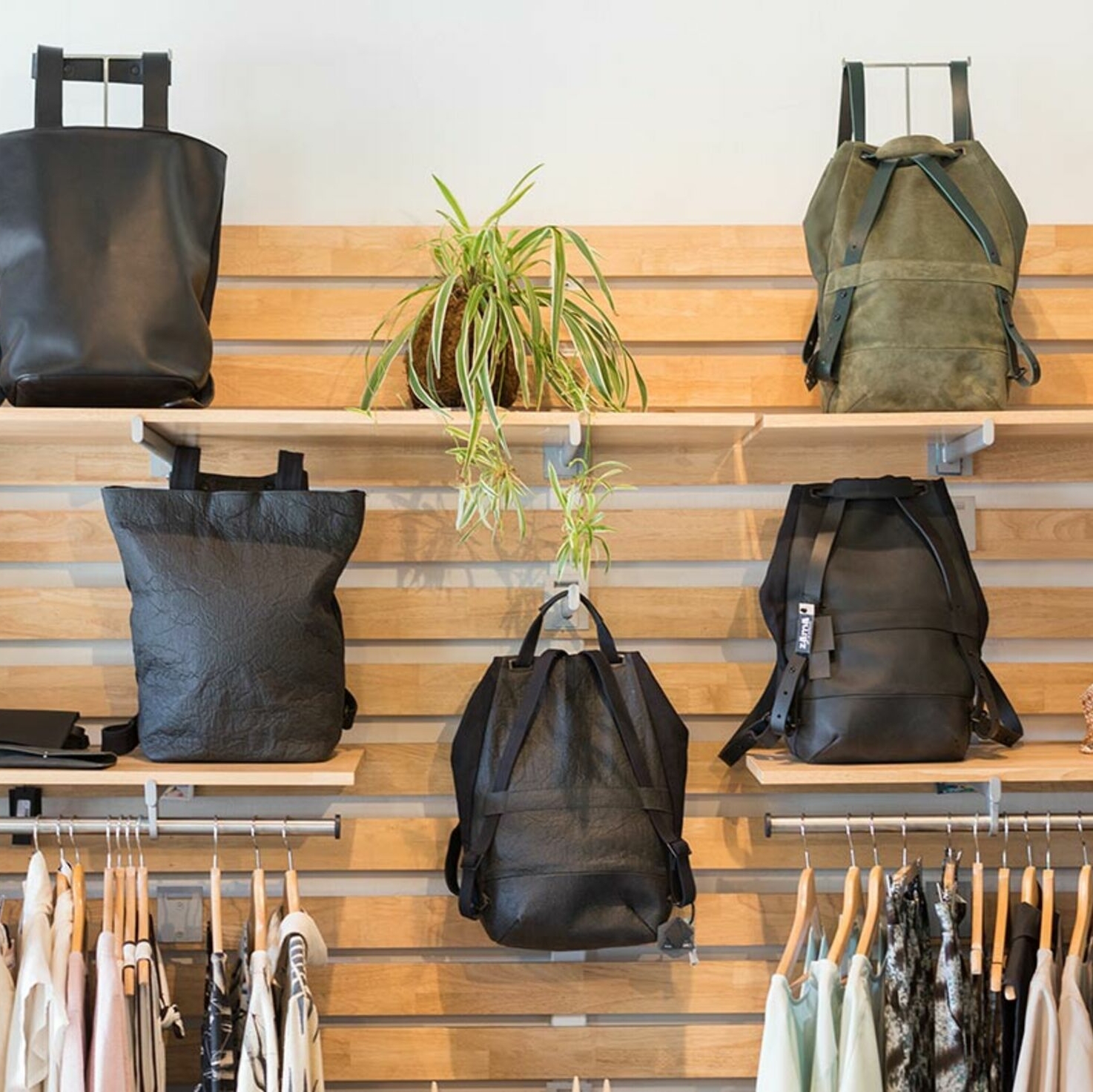 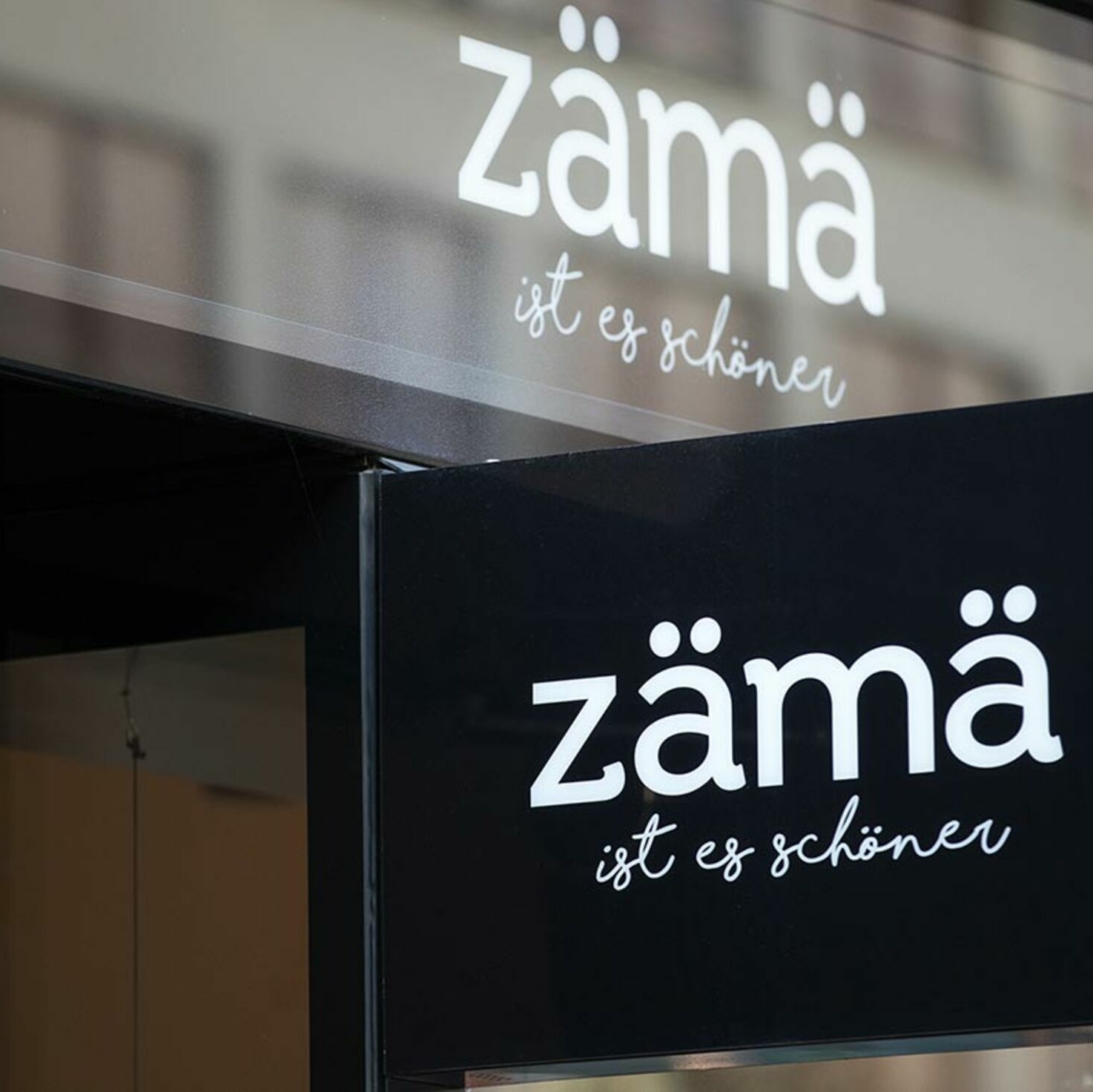 In their store Zämä, Rainer Neusius, Yvette Morkos and Sebastian Lanz exclusively sell clothing and accessories that have been produced under fair conditions.

‘We offer an alternative to fast fashion’, says Rainer Neusius. He has been running Zämä since 2015 together with Yvette Morkos and Sebastian Lanz. The store only stocks timeless fashion pieces produced with respect for the people who make them.

Sportswear, skirts, shirts, tees and jewellery: at first glance, Zämä appears little different to the majority of clothing stores. But look under the surface and the meaning of the phrase ‘Zämä ist es schöner’, or ‘Things are better at Zämä’ – written on an illuminated panel hanging in the store – becomes clear: this shop has more to it than just fashion and design. ‘It’s about working together – or “Zämä”, as we say in Swiss German’, explains Yvette Morkos. She founded Zämä with Sebastian Lanz and Rainer Neusius in the Europaallee quarter.

Zämä focuses more on compelling designs than on following trends.

Yvette is a designer and previously ran the shop Comepony & Friends at Provisorium Sihlpost, a pop-up space for art, design and fashion. When the space had to close due to renovations, the Swiss railway company SBB offered Yvette an alternative in the form of a premises at Europaallee, a brand new development at the time. ‘I fell in love with the location immediately’, says Yvette. She continued to run Comepony & Friends from this address for the next two years. In 2015, she took the opportunity to refresh the concept, and asked Rainer and Sebastian to help her with her project. ‘I was more than willing’, says Rainer. He is Yvette’s neighbour. Before getting involved with Zämä, he built a career in the communications industry.

The Zämä team believes their location at Europaallee to be ideal.

Sebastian, meanwhile, was already the owner of two stores offering sustainable, fair products: Rrrevolve Fair Fashion in Zurich’s old town sells fairly produced clothing, while his store on Josefstrasse is home to sustainable accessories and household items. ‘Sebastian is a pioneer of the sustainable fashion movement. He was one of the first to open a fair fashion store in the city’, says Yvette.

The Zämä team believes their location at Europaallee to be ideal, even if Rainer does admit that many Zurich residents still have some preconceptions about the neighbourhood. ‘They think it’s just a motley collection of offices and building sites.’ It’s not just Zämä that is working to challenge this image: ‘There are many unique labels and stores here that are helping to turn this into a lively district.’ In fact, more and more people have been flocking to the area – and to Zämä – since the opening of the 25 Hours Hotel and Kosmos arts and culture centre.

They enjoy talking to their customers, who are often interested in finding out more about the origins of the products in store and the conditions under which the clothes were made

Although Zämä caters to a range of different people, they all have one thing in common: ‘They take an interest in the world and are aware of how important it is to think about fairness and sustainability, not just in what we eat, but also what we wear’, says Rainer. The founders can often be found on the shop floor. They enjoy talking to their customers, who are often interested in finding out more about the origins of the products in store and the conditions under which the clothes were made. ‘One time, a customer came back to the store half an hour later with more questions for me. There are also people who call us up and ask for more information’, explains Rainer. Reactions like this are why he loves working at Zämä: ‘I’m able to actually achieve something and offer an alternative to fast fashion that is being received with open arms’.

Yvette, Rainer and Sebastian know all about local and international labels. ‘Our customers set great store by that’, says Yvette. She works in close collaboration with designers and knows them personally. The team also gives each designer the chance to present their articles for a limited period of time in the guest display window.

Yvette, Rainer and Sebastian know all about local and international labels.

Yvette and Rainer firmly believe that the interest in fair, sustainable fashion will continue to increase. ‘The general level of awareness is rising’, says Yvette. ‘Even though producing collections under fair and sustainable conditions is still a new concept for many people in Switzerland.’

Yvette sheds light on the differences between fair production and sustainable production: the former means that the people involved in production receive a proper wage and benefit from suitable working conditions. Sustainable means that the impact of production on the environment is kept to a minimum. ‘For designers, this is often difficult to verify’, she says. ‘For example, it is virtually impossible to determine where the sewing threads are sourced from.’ Rainer adds that many of their designers often work with leftover stock and recycled fabrics. ‘That’s sustainable too.’

Zämä also makes sure that all items of clothing sold in store – in addition to being fair – are of a high quality. And it focuses more on compelling designs than on following trends. ‘Our message is clear: less is more’, says Yvette. After all, she contends, nobody needs to own ten versions of the same shirt. ‘And if they do, they should buy them from us – because they were produced fairly.’