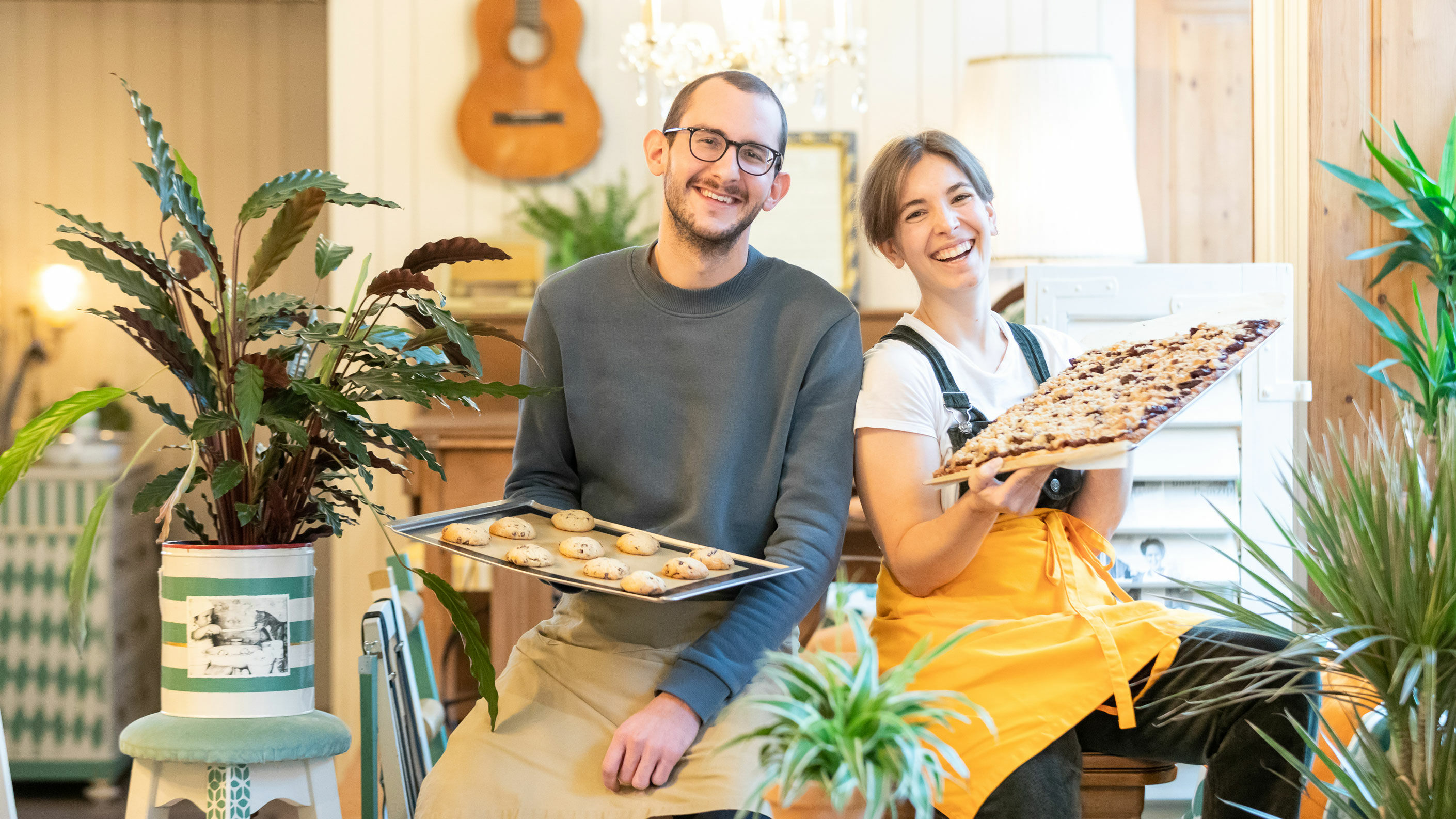 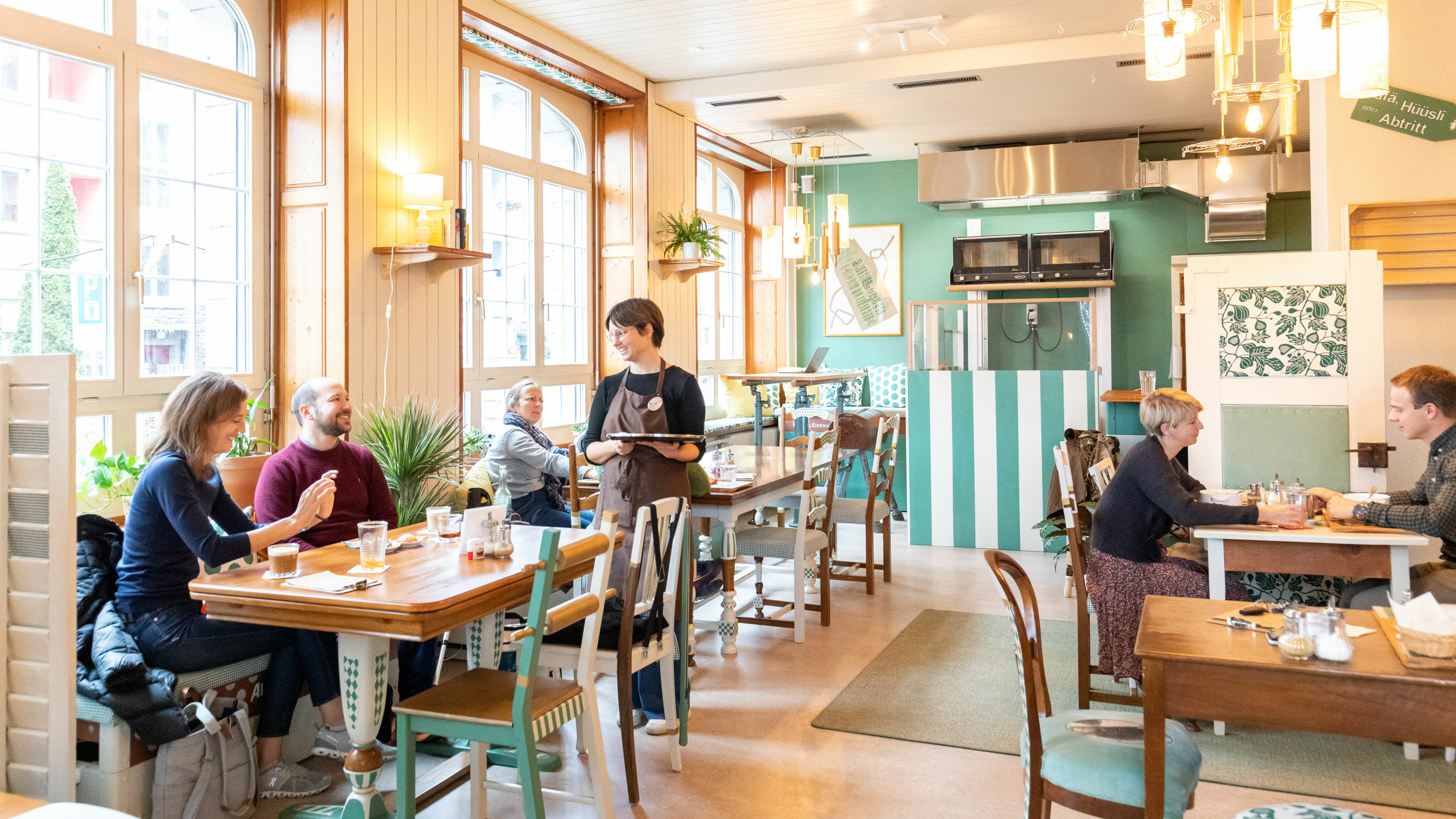 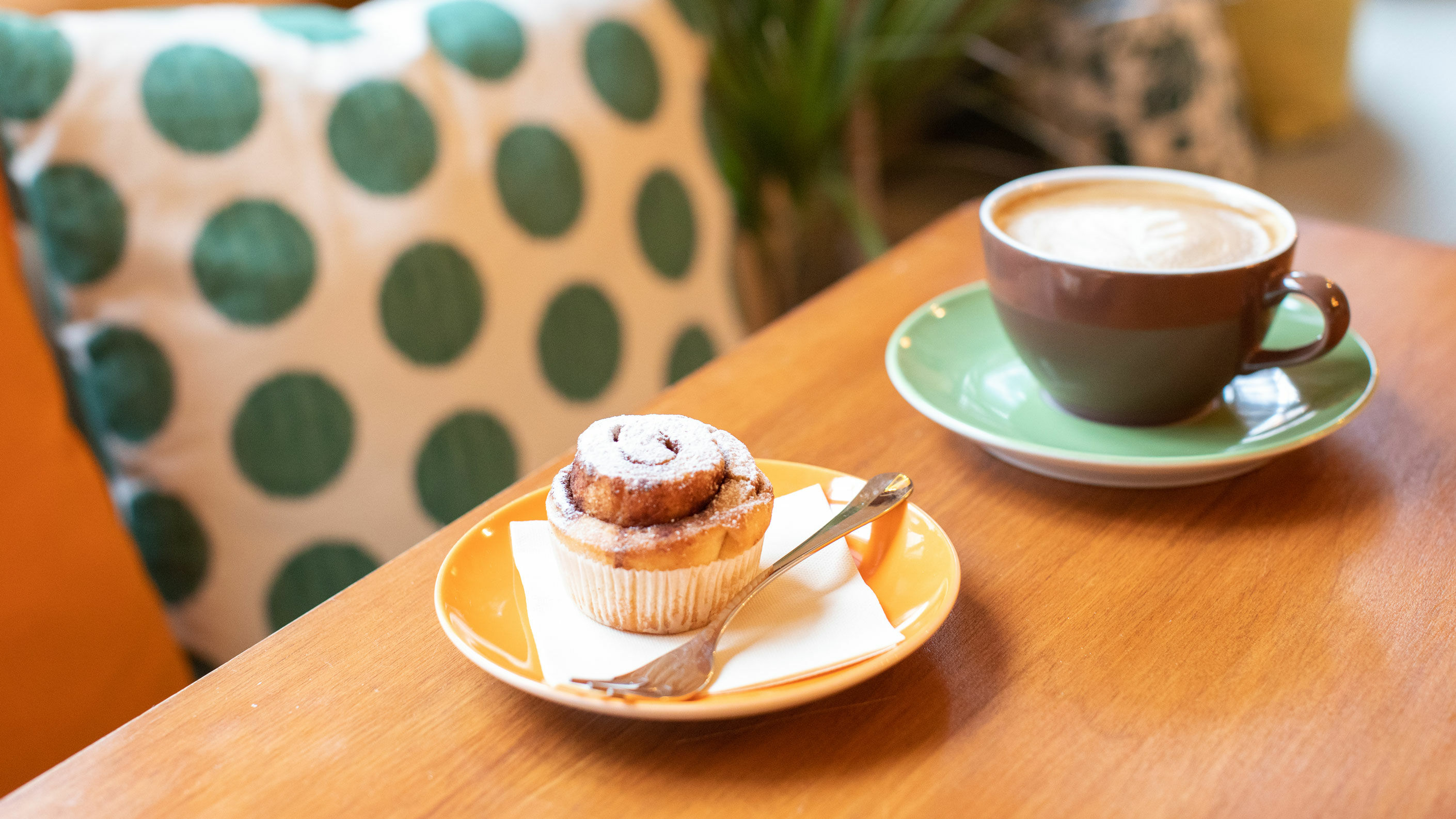 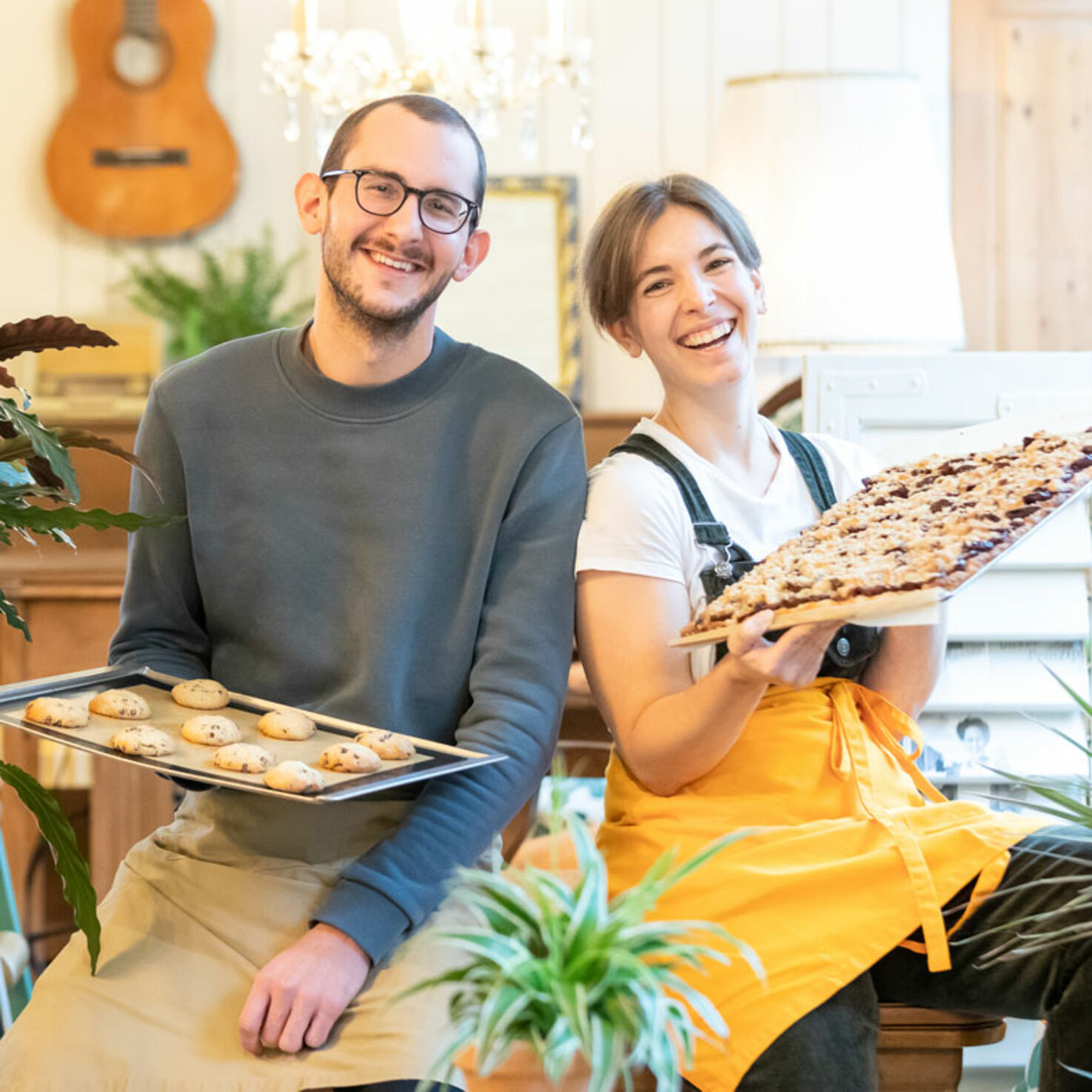 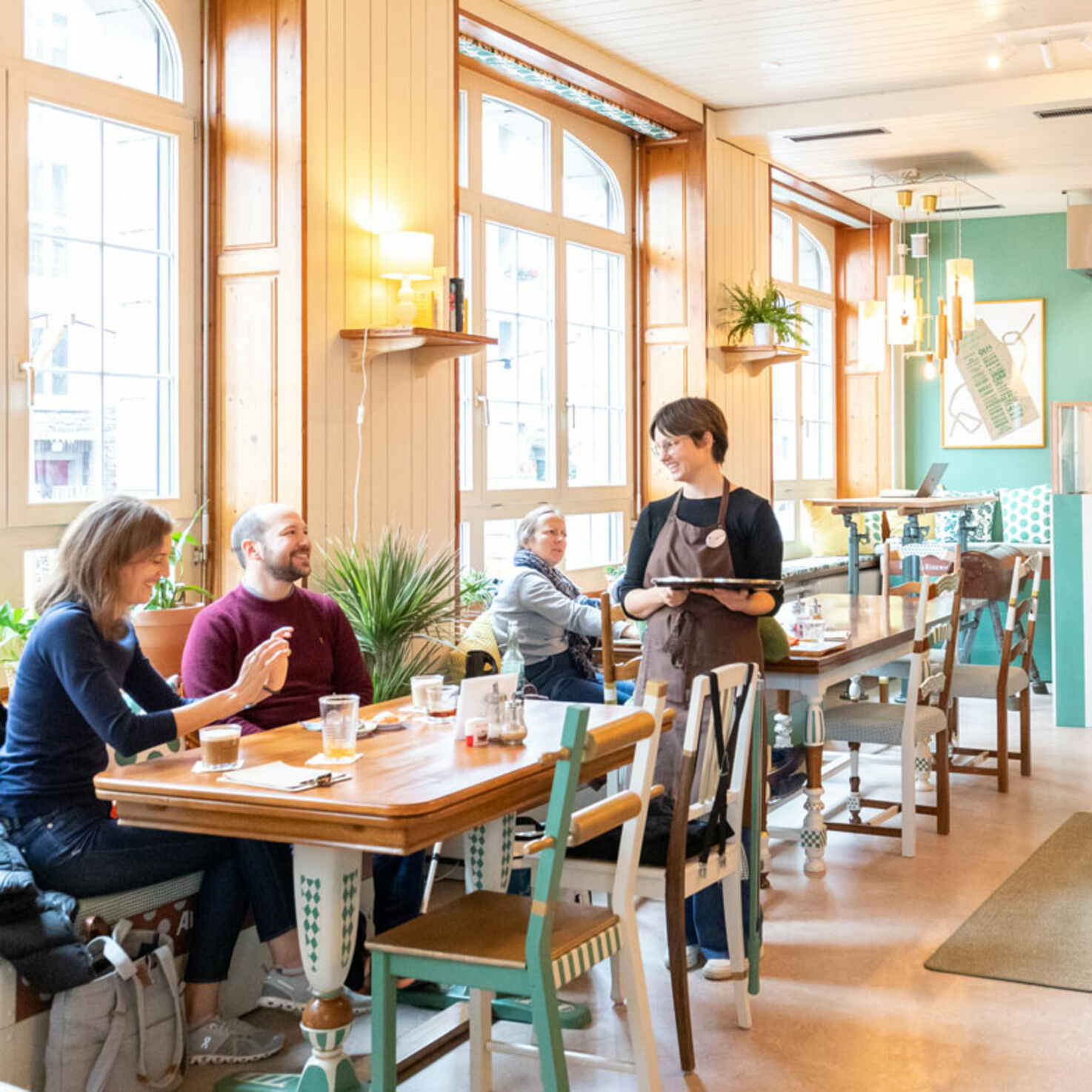 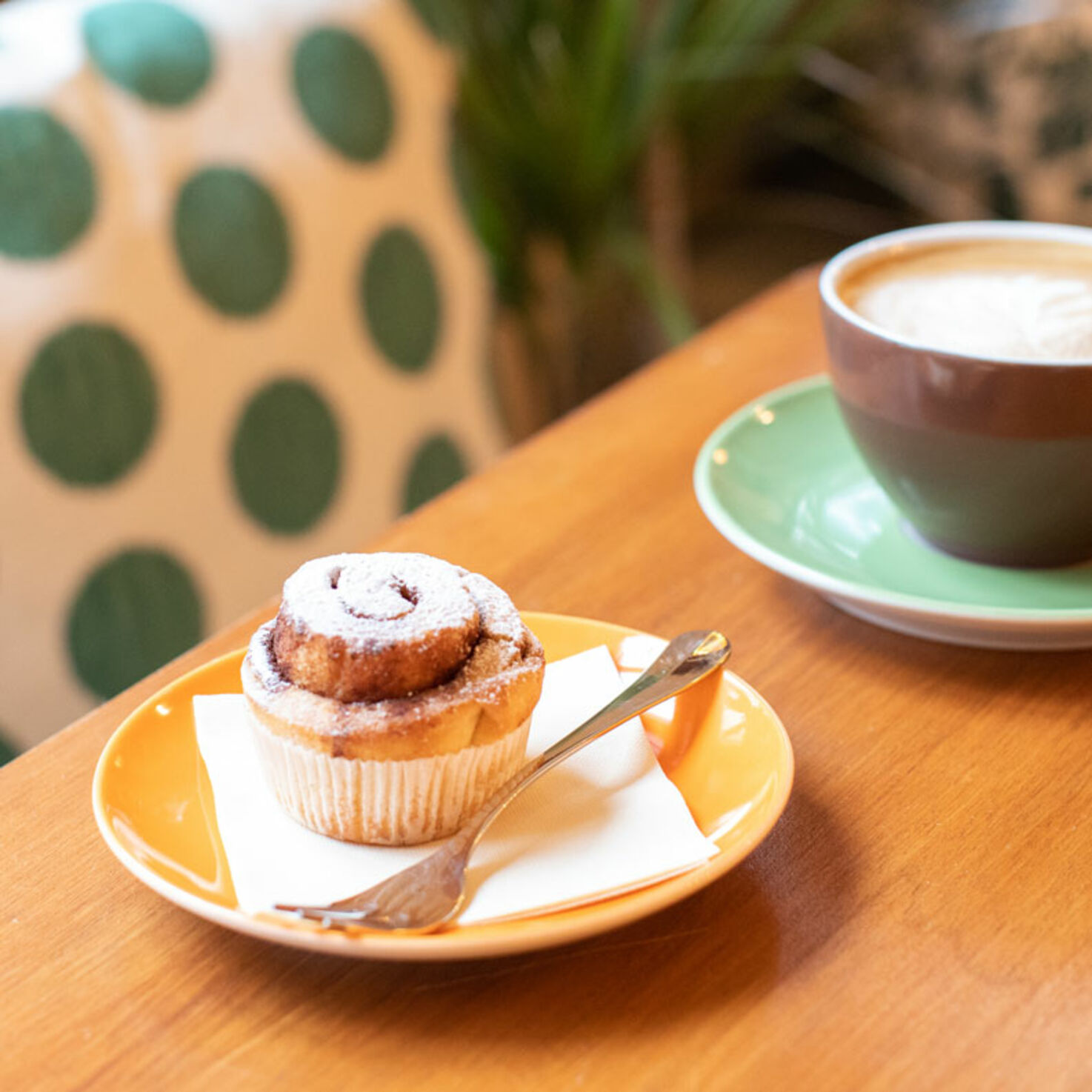 Nelly’s neighbourhood café is open three days a week. Co-founder Lukas Rüegsegger and manager Pia Seessle tell us what their restaurant has to do with gym class.

Four friends around 30 wanted to start a joint project. The result is Nelly's Quartierkafi on the edge of district 4: a place that does not make a profit but is self-supporting. Co-founder Lukas Rüegsegger and manager Pia Seessle are interested in something else: promoting community. In the neighbourhood, where people should know each other and get to know each other. And in their various families, who together have set up a passion project.

It all began with gym class. Four boys who did gym together became firm friends. Back then, they were just five years old. The boys got older, and so did their friendship. They moved away from the Zurich area or travelled the world on business. But the friendship between the four men remained. Somehow they always managed to get together for a drink or a nice meal.

One day, over an after-work beer, they joked, ‘Hey, why don’t we open a café?’ One of them suddenly became serious: ‘What do you think, would that be an idea?’ – ‘That rattled around our heads for a while’, Lukas Rüegsegger says today, ‘then we thought, yes, why not? So we started, in all seriousness, by drawing up a business plan, looking for locations and so on.’

The team that runs today’s Nelly’s is a diverse mix of volunteers and employees.

A business plan and searching for a location: that sounds like a conventional café. But that wasn’t the point for the four founders. ‘We call it a passion project. For some it’s a hobby. A time-consuming and educational hobby’, laughs Lukas. Because the team that runs today’s Nelly’s is a diverse mix of volunteers and employees.

Another unusual feature is that the café is only open three days a week. Then it serves up lunch, soups, coffee and cake, and even breakfast on Saturdays. Nelly’s is closed on the other four days. No kidding. The reason is simple: the four owners aren’t looking to make much profit. For them – ever since they came up with the idea over an after-work beer – it’s more about having a joint project and letting other people get involved.

There's room for everyone at Nelly's.

Their friendship resulted in a neighbourhood café. Nelly’s is located where Hohlstrasse merges from district 4 into Altstetten. The little garden outside is adorned with wooden vaulting boxes, and an old set of parallel bars stands next to the entrance – a reminder of the gym class that was the start of their friendship. The name is also an affectionate look into the past: Nelly was the name of Lukas’s grandmother. ‘Everyone who came by was fed’, he recalls, ‘there was room for everyone.’ That’s how it should be at Nelly’s.

‘We can’t be and don’t want to be a pass-through café.’

Today, the team is not only reinforced by family and friends, but also by a café manager: Pia Seessle is responsible for everything that is served, from cakes to soups to coffee. ‘It was good that the concept was not fixed, so we could be flexible and improvise’, she says. ‘Everything in here is homemade, and we don’t just mean the food and drink. We made the cushion covers ourselves, painted all the tables, and some of the furniture comes from our grandparents.

With most things here, it’s always been a case of learning by doing.’ Thus, since its founding, Nelly’s has become a kind of family business that affectionately expands the concept of family. ‘We can’t be and don’t want to be a pass-through café’, says Lukas, ‘but a place where people meet and get to know each other. We want to help people talk to other people again, not just online.’ The fact that the café is only open three days a week also helps to keep it personal.

Everyone who works there, from the service staff to the co-founder, calls themselves by the same name: they are the Nellys. Once a month there is also Nelly’s Night when the original team gets together with the guests. This helps to build a sense of community in the neighbourhood and preserves the original idea behind the café – continuing a friendship that started one day in gym class.