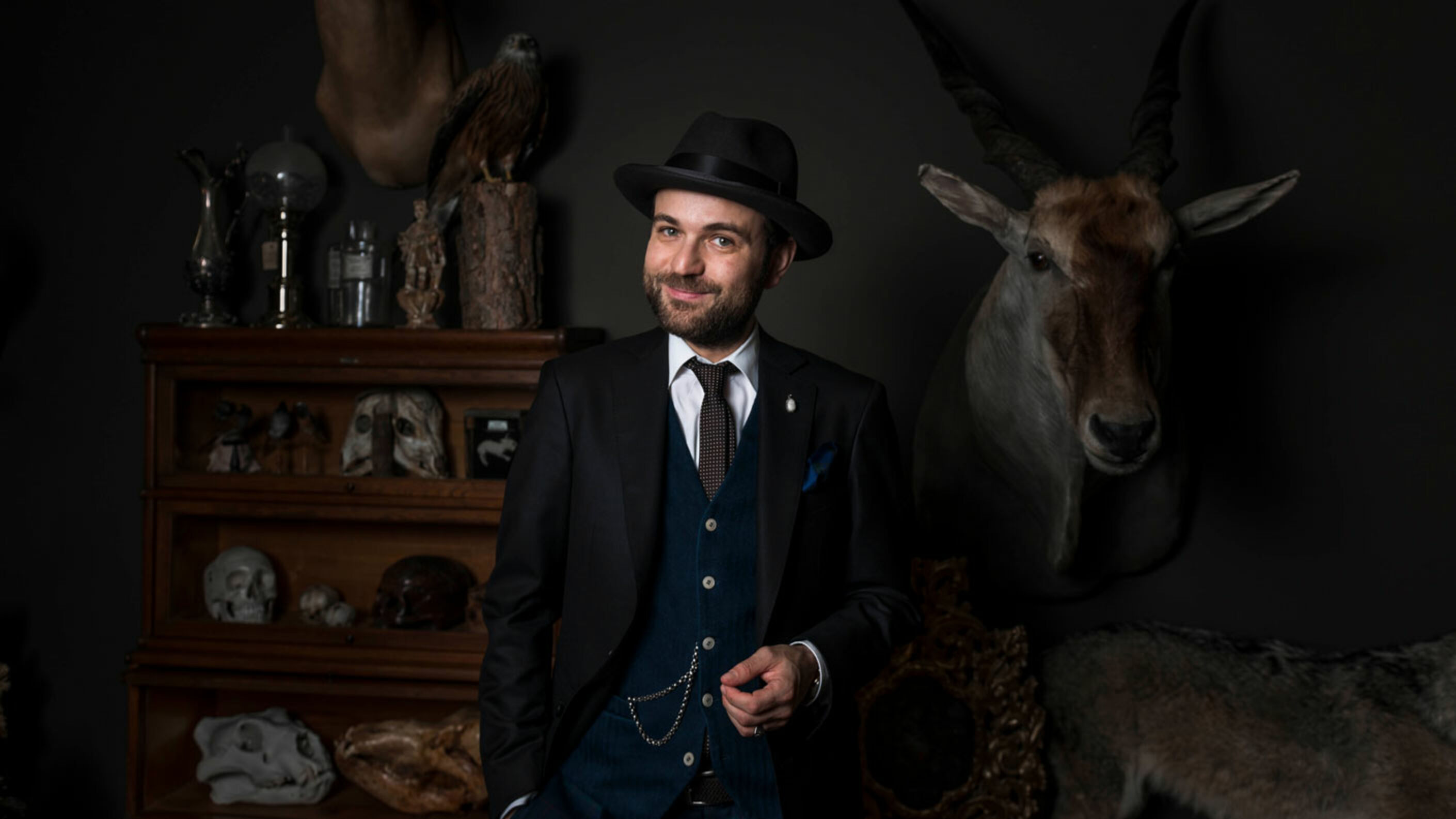 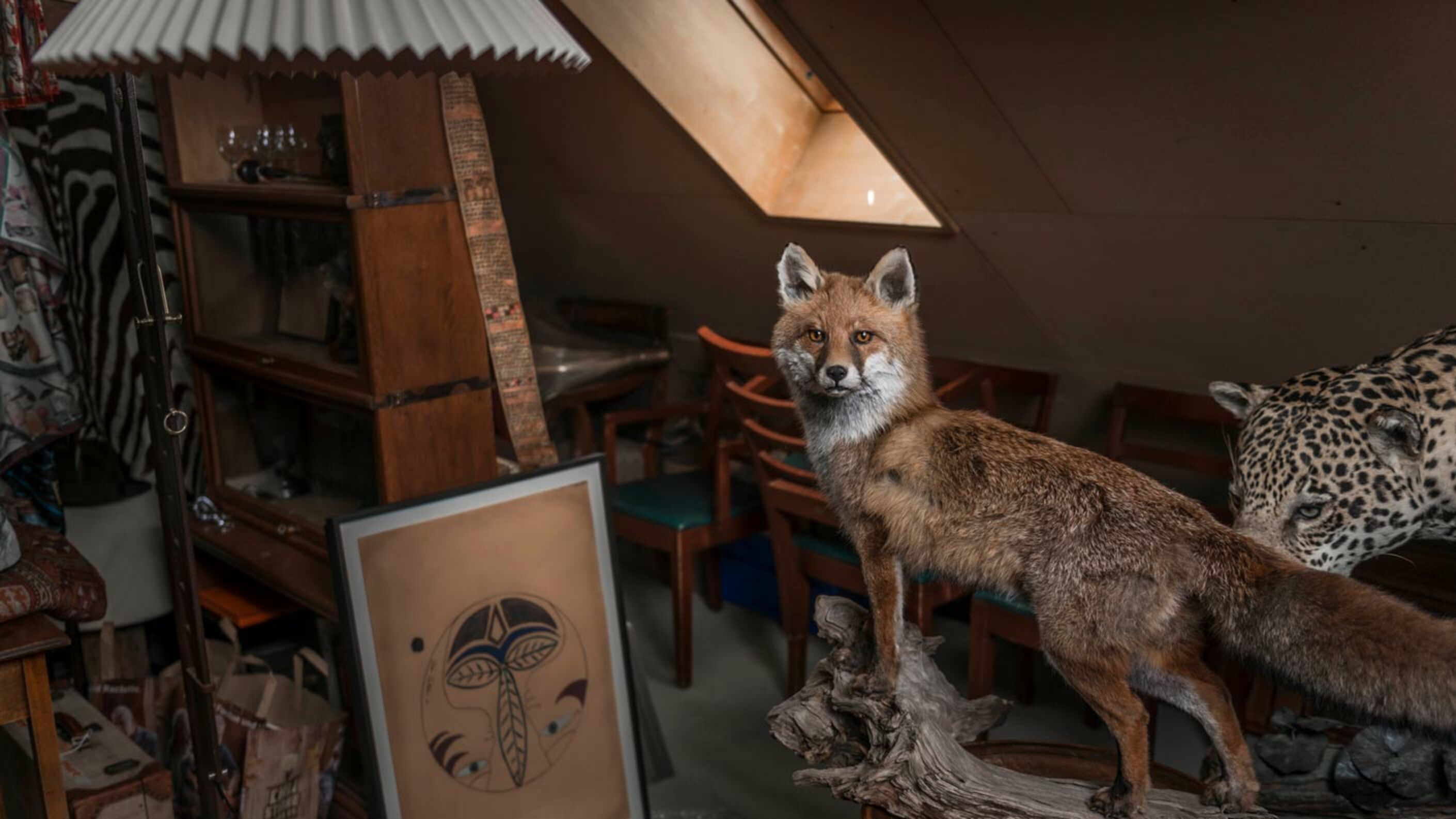 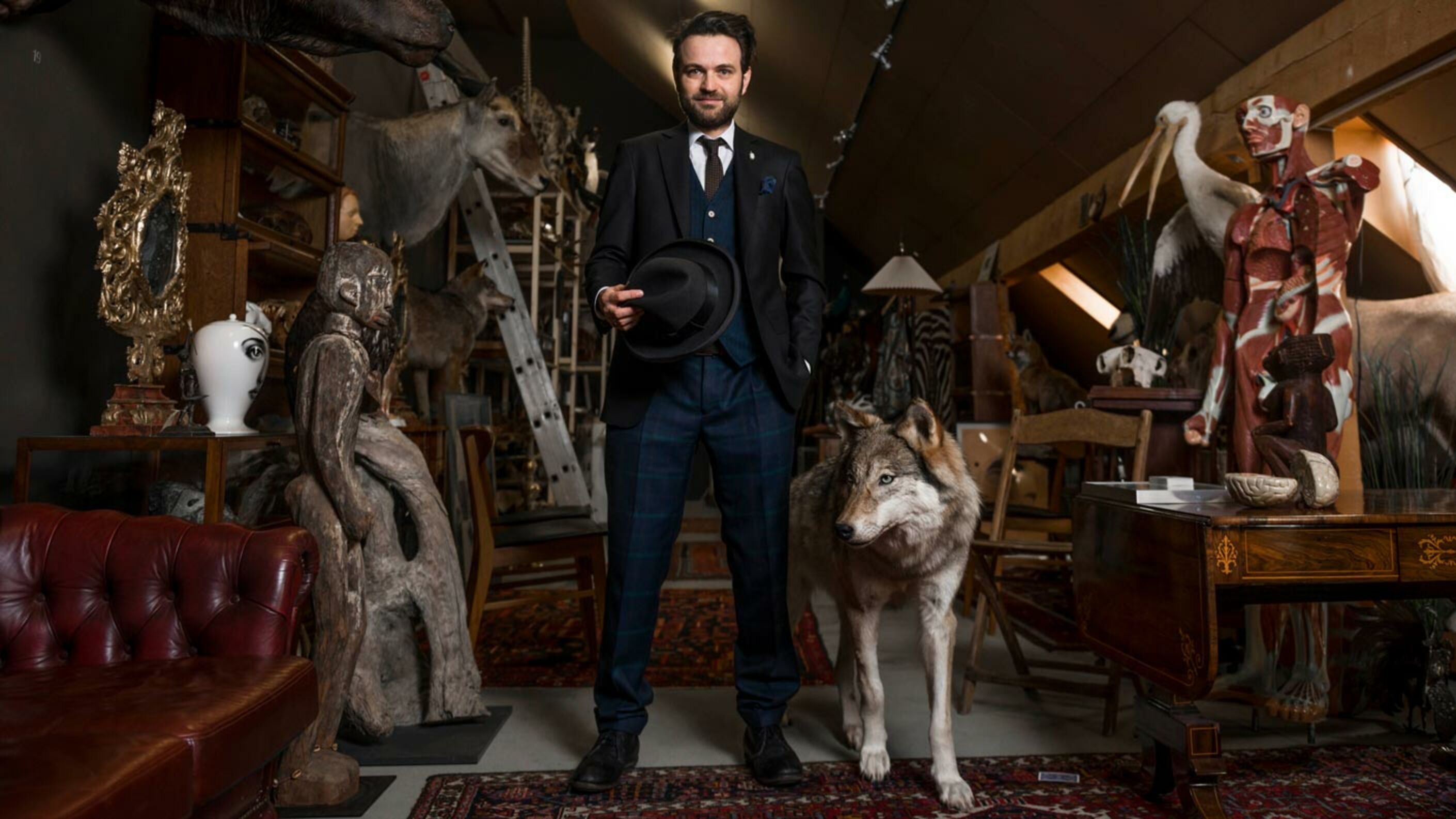 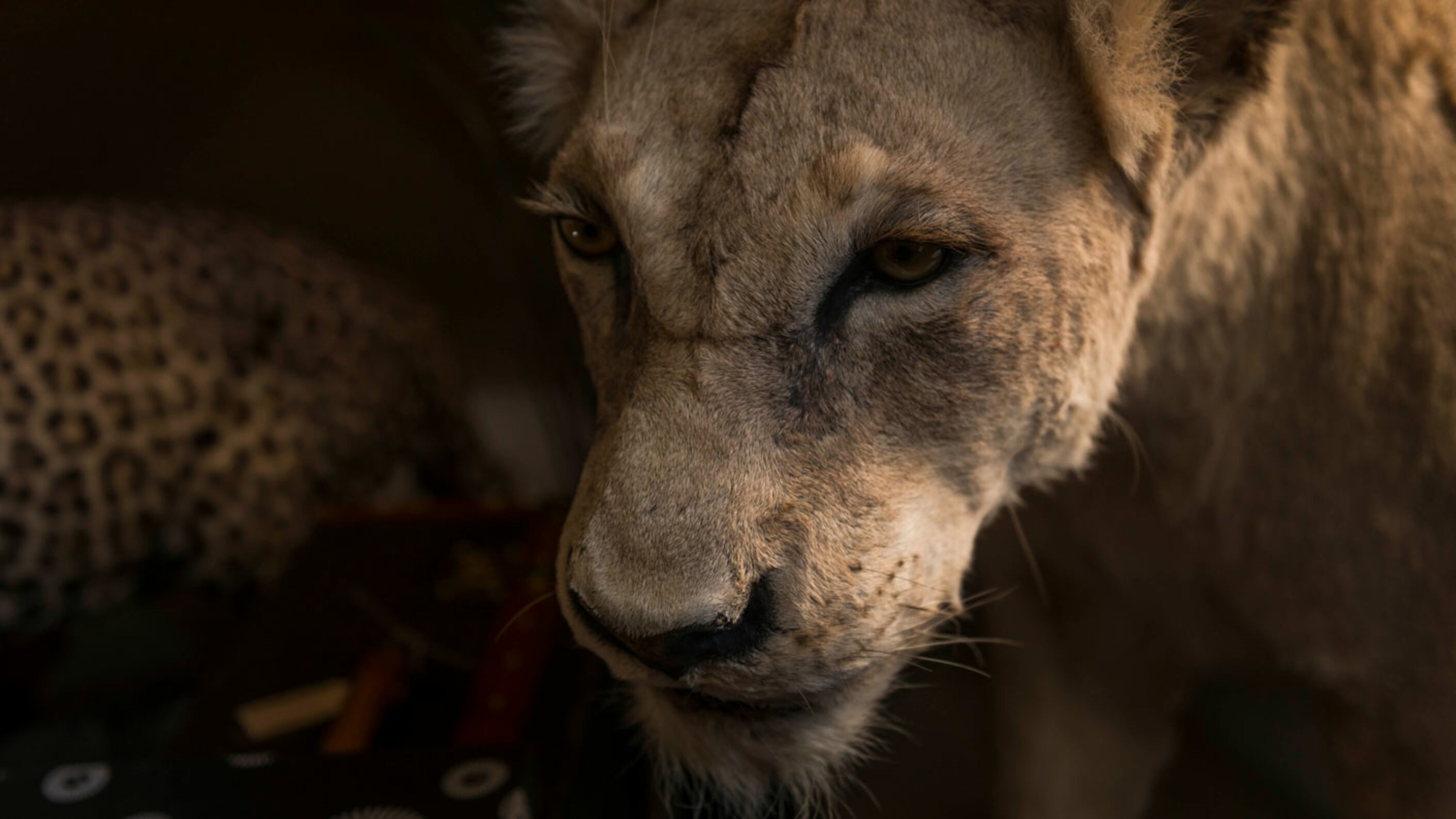 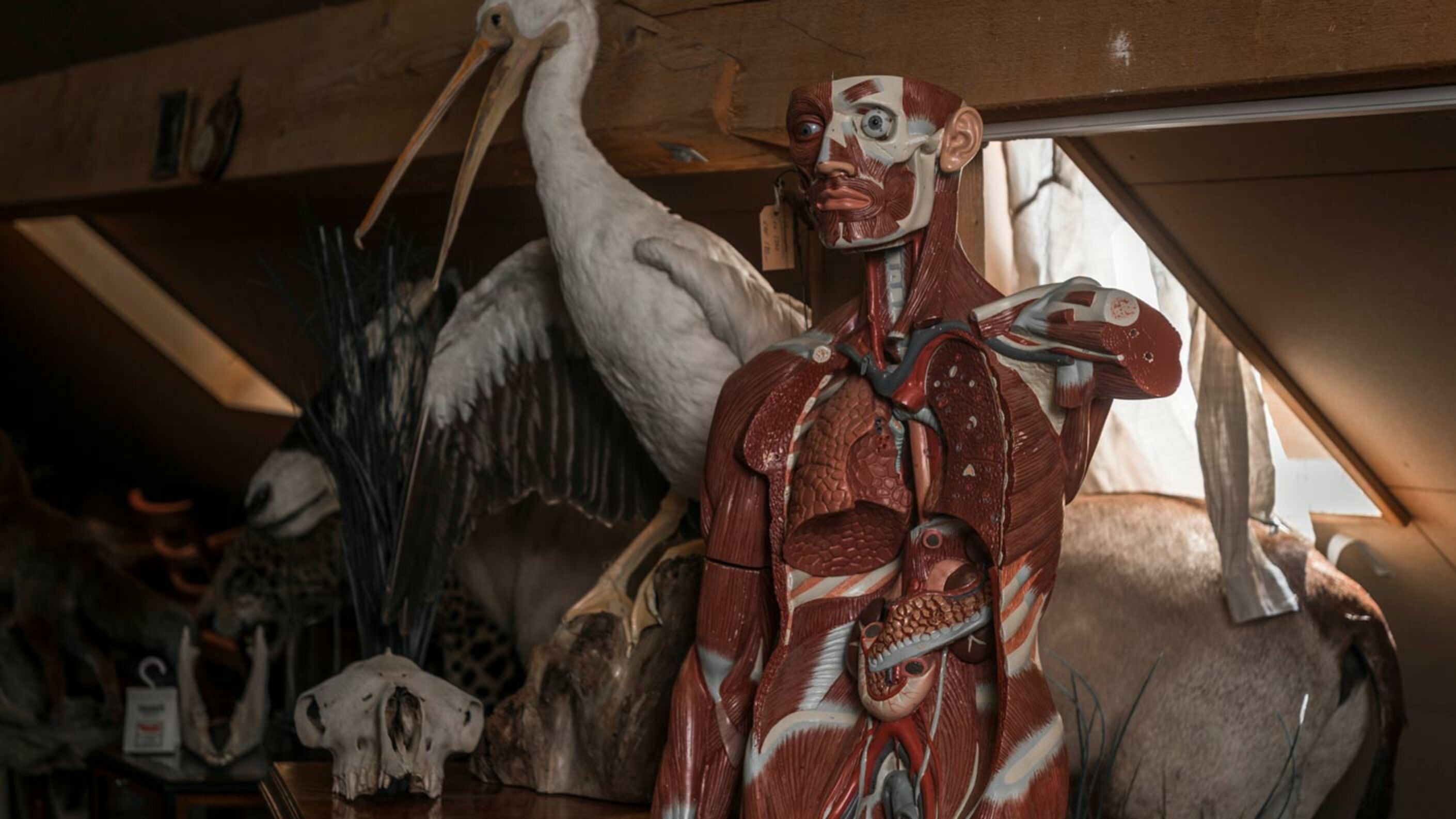 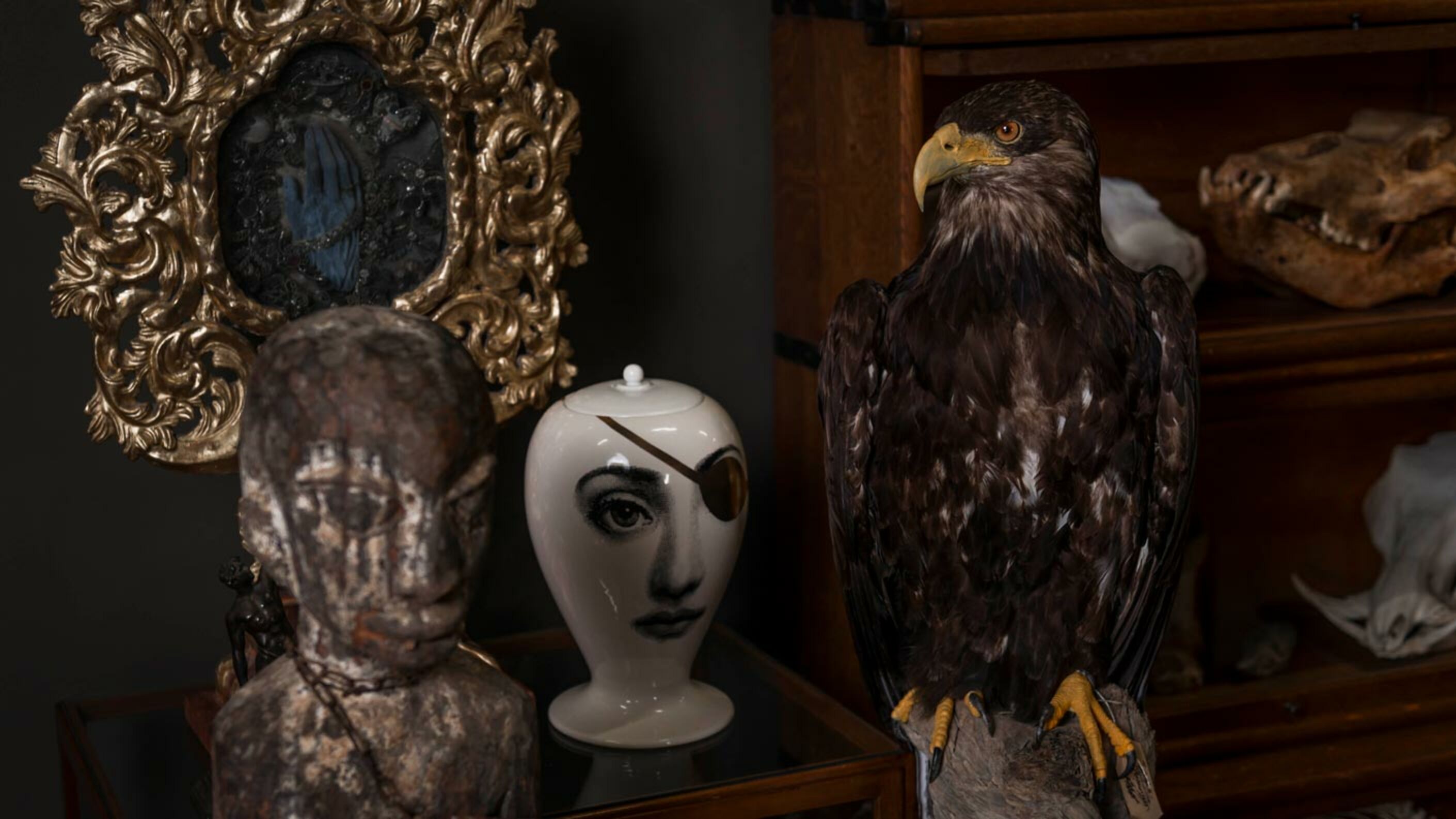 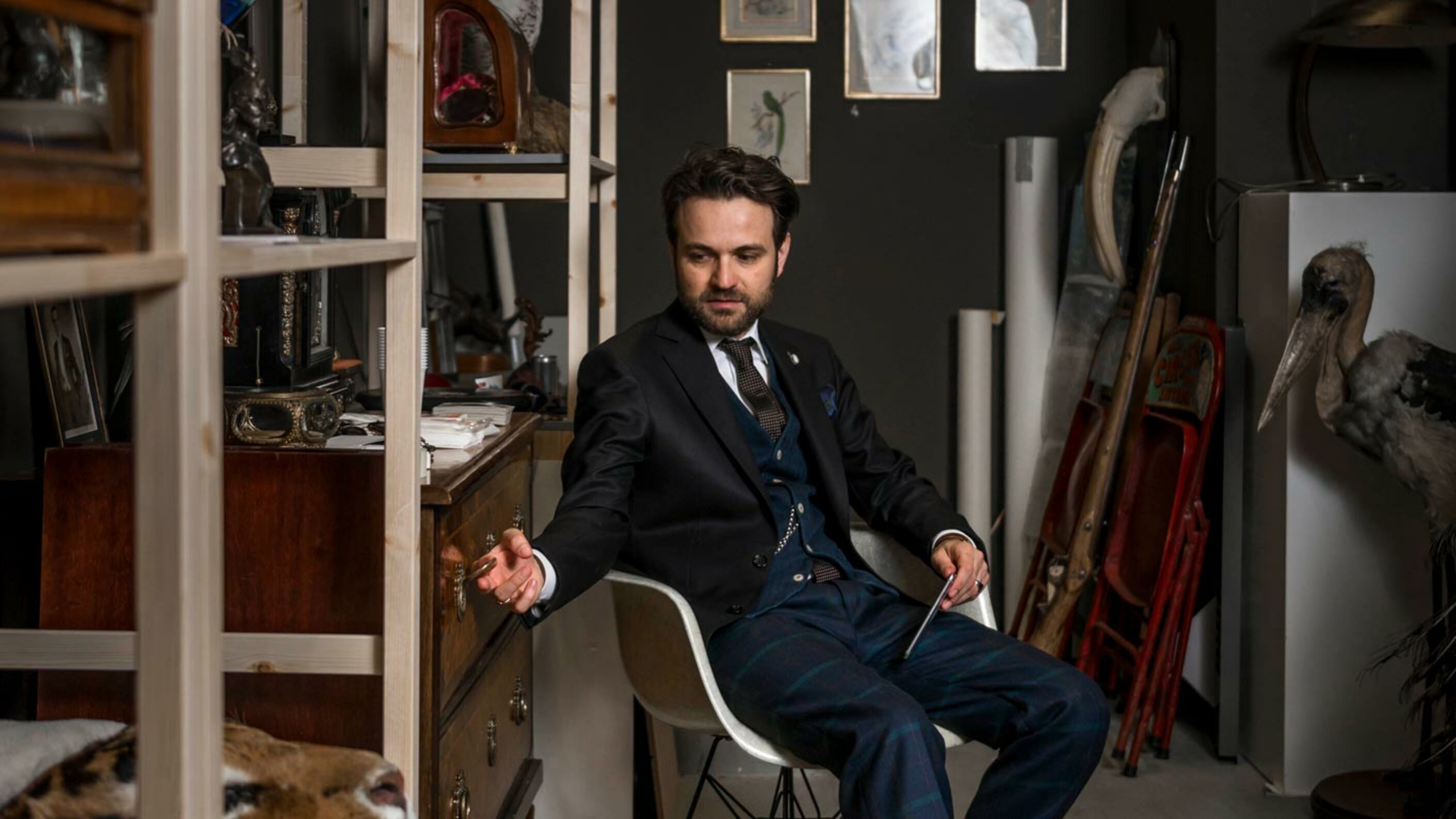 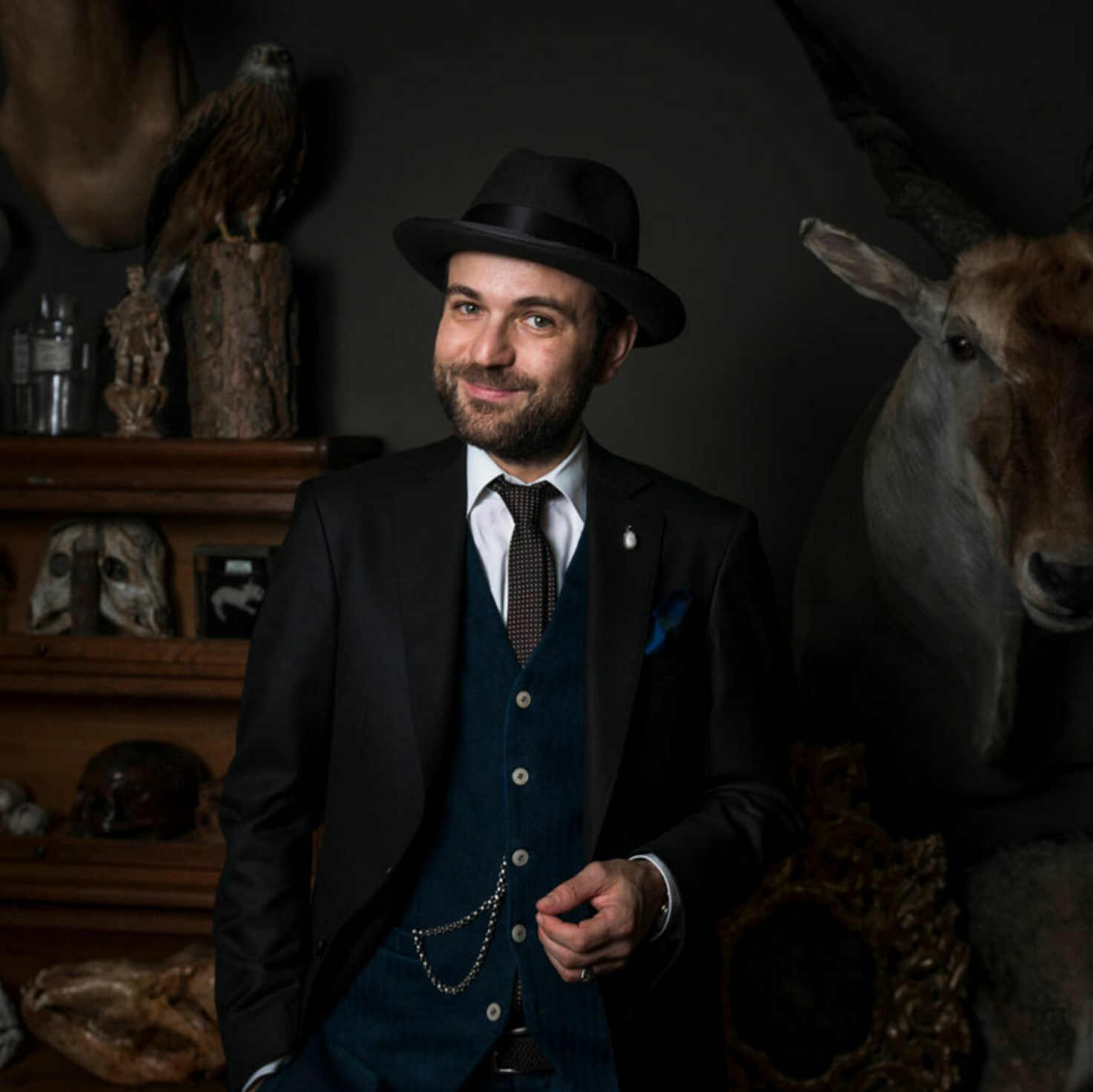 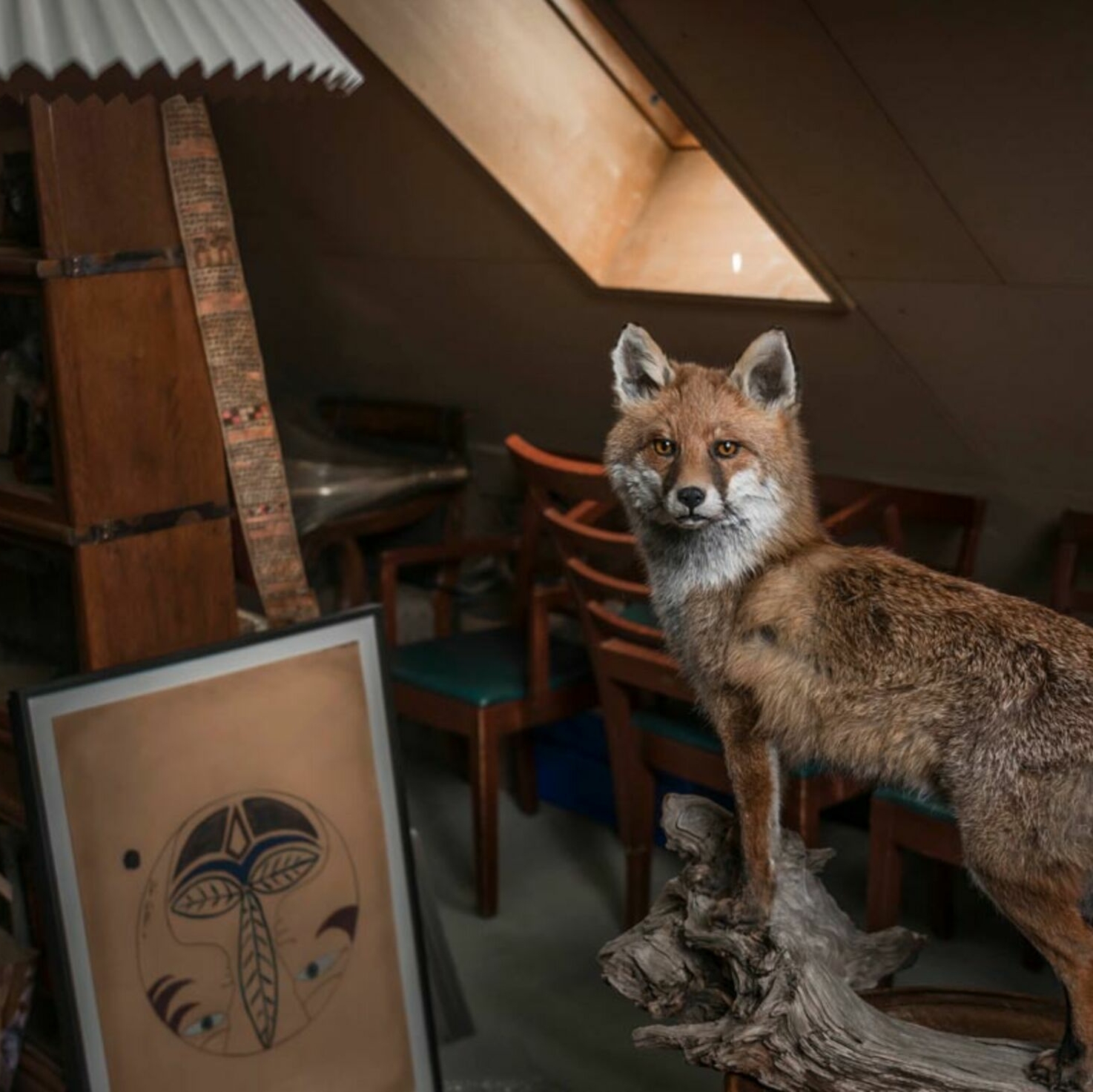 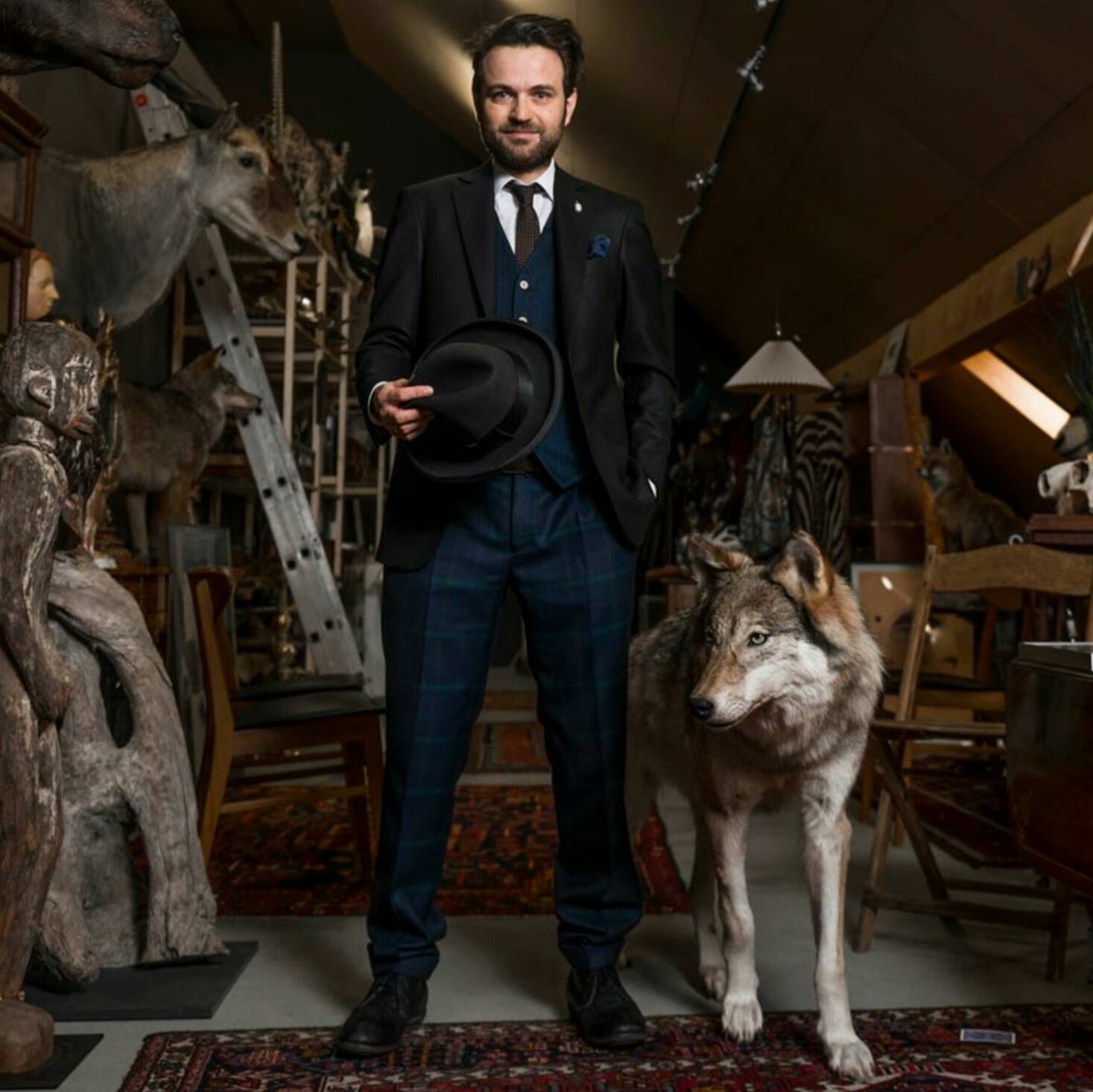 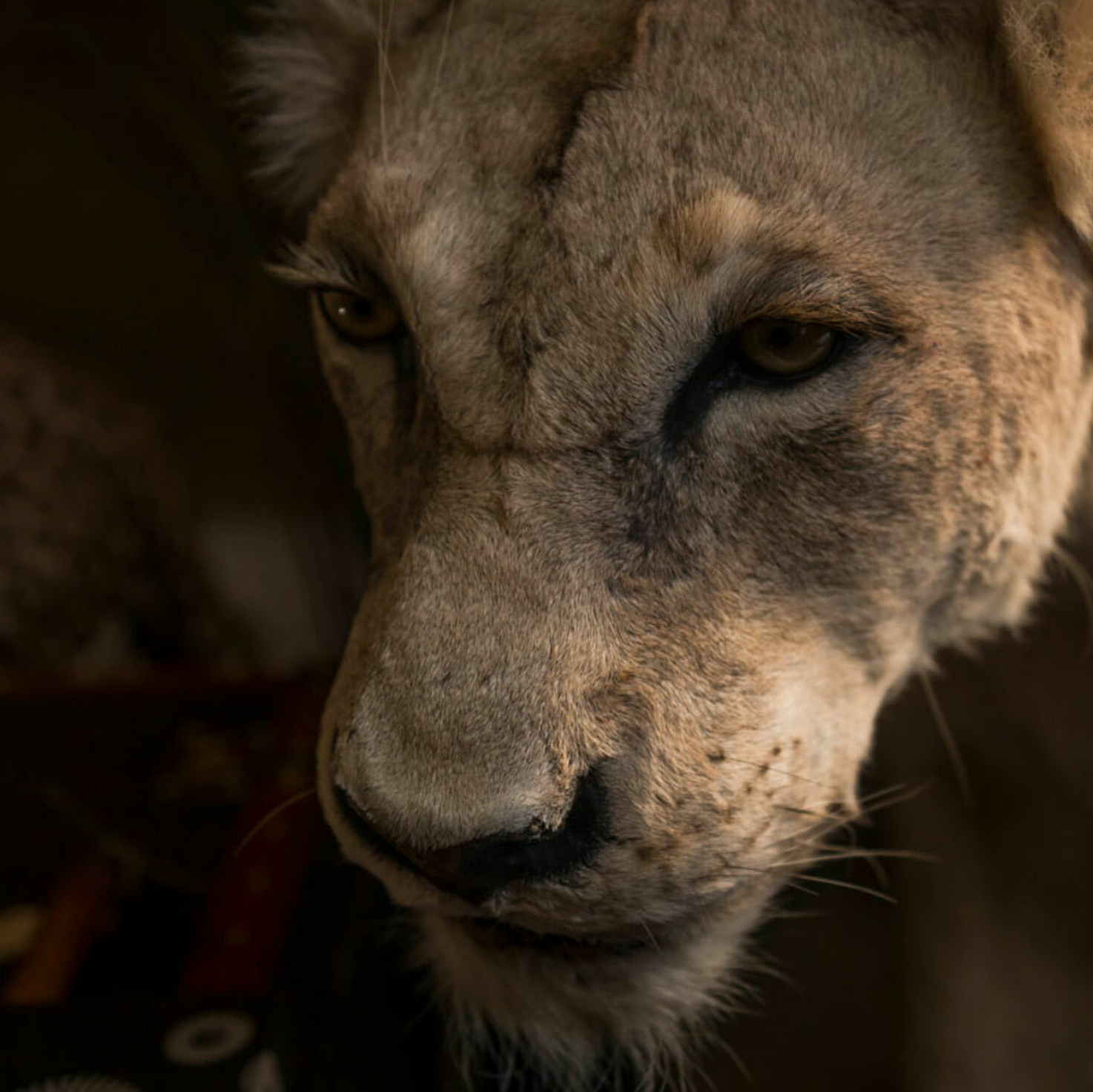 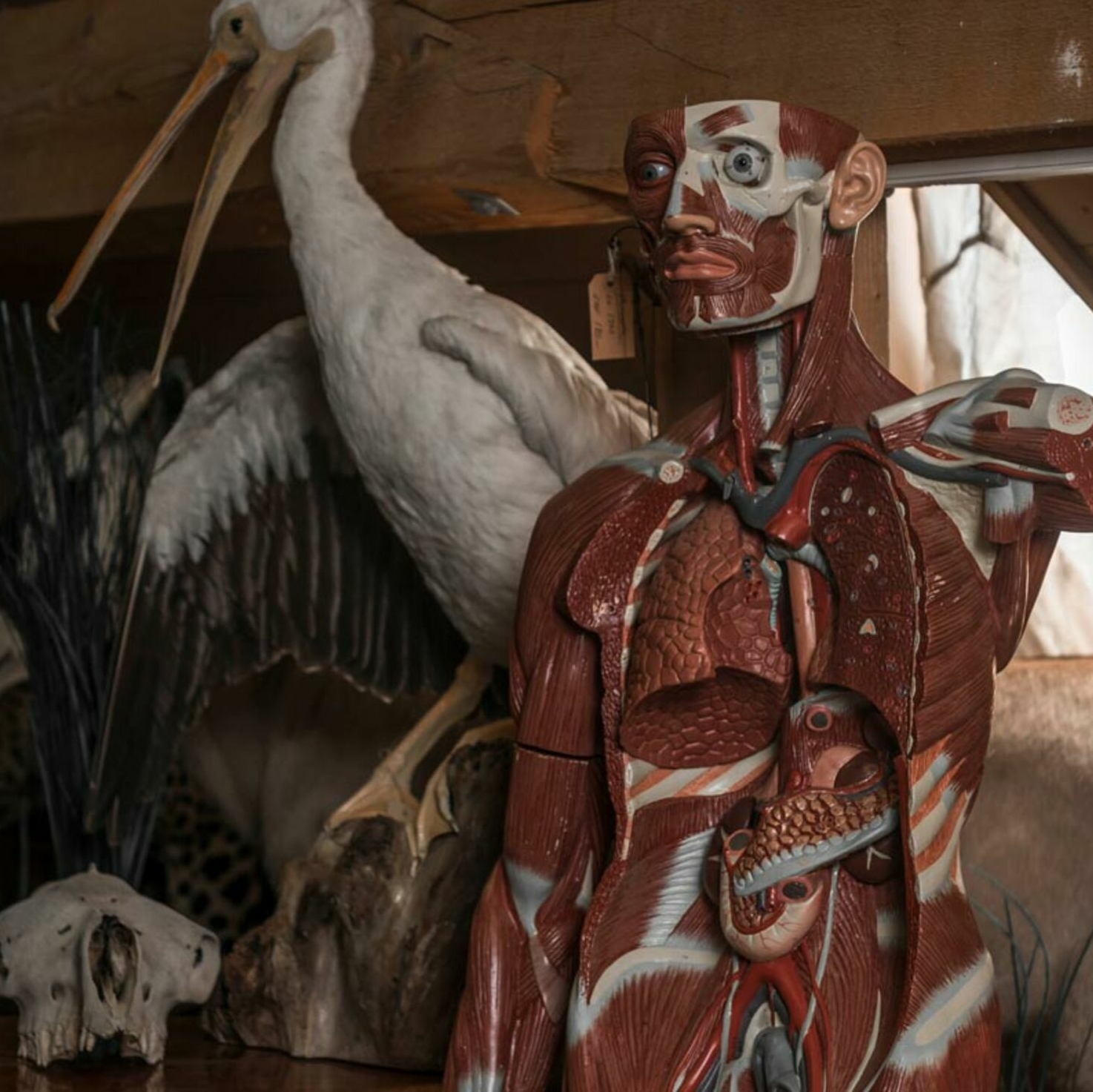 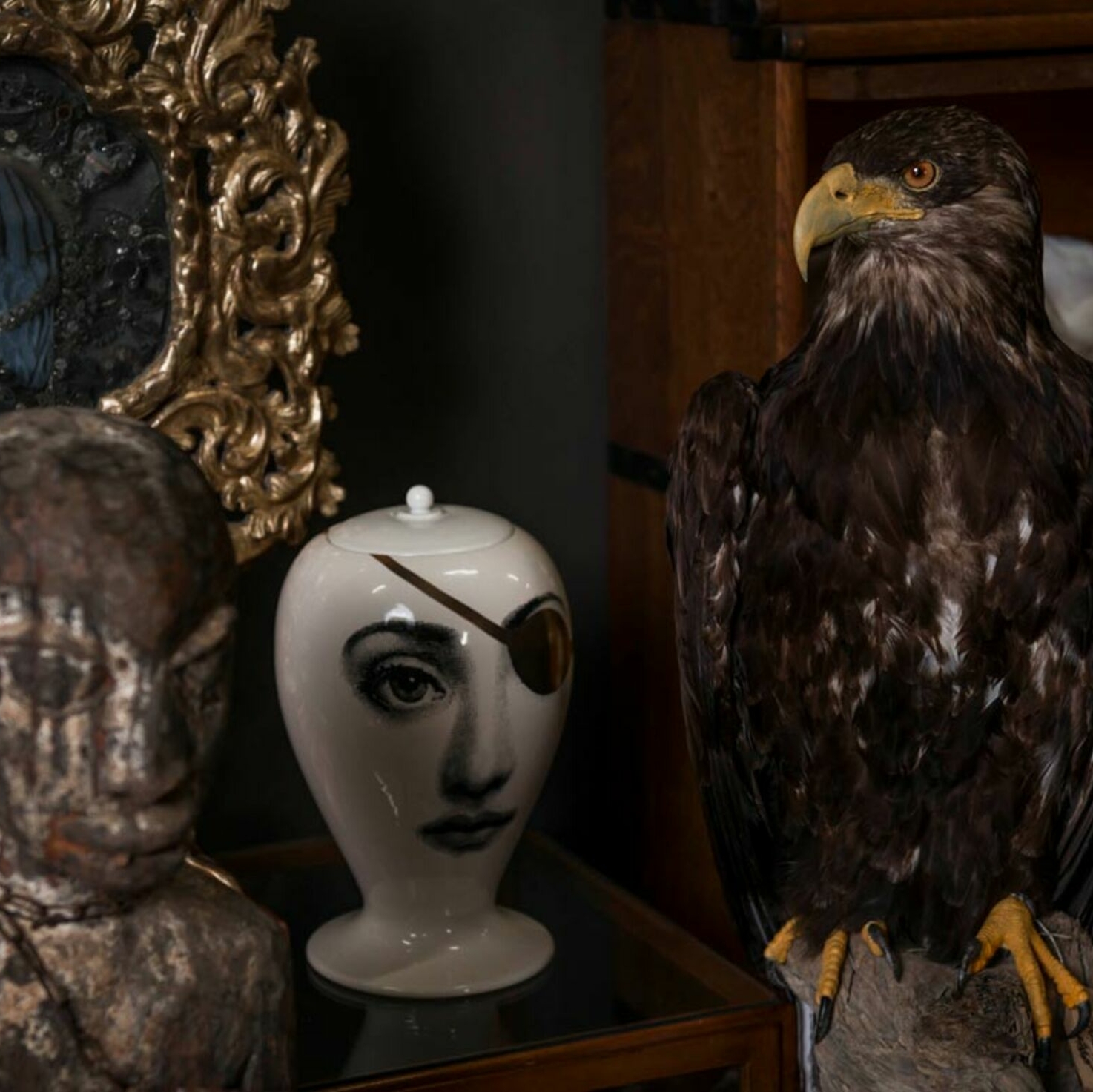 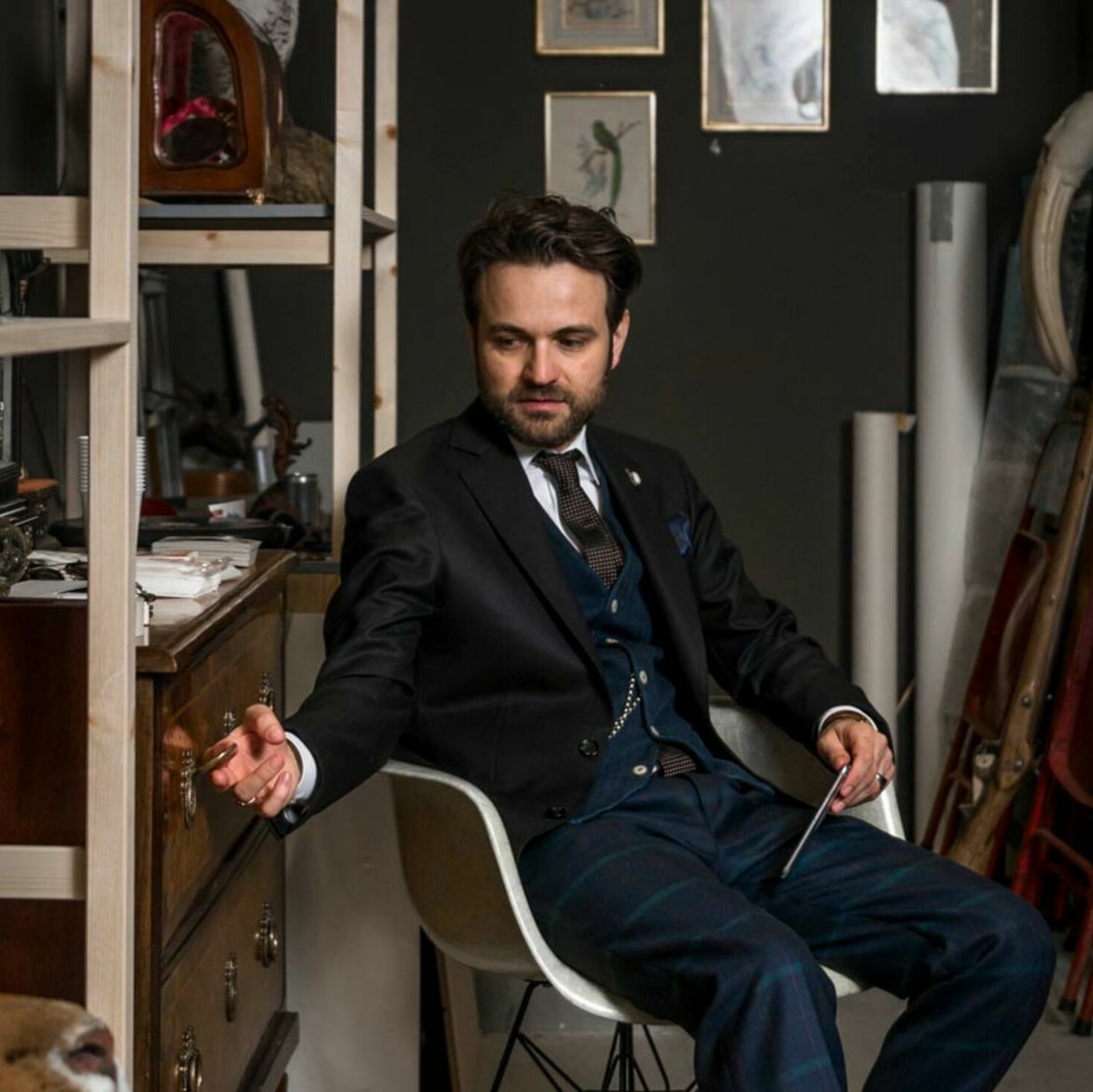 Taxidermy collector and magician Christian Link is known for his ornate animal mounts. And his display space is home to a host of rare oddities.

As a dealer of antiques and taxidermy, Christian Link is fascinated by the exquisite and the extraordinary. He is also a magician, and dreams of opening a museum that would also offer a platform for his tricks.

The feathers of an emperor penguin shimmer in the pale light. A white leopard offers me a penetrating stare. A peacock stands with its magnificent feathers in full bloom, lending the space a touch of the theatrical. The bodies of the animals are ramrod straight; their facial expressions frozen. It’s almost as though somebody has pressed the pause button on a remote. Standing before me is a man in a white shirt, a blue jacket and a tie.

‘In a way, I bring the animals back to life’, explains Christian Link. The Zurich native is a collector of taxidermy and antiques – and a professional magician. He walks through the display space, past a number of relics, opens the glass door of an antique cupboard and takes out the embryo of a hare preserved in ethanol. ‘Cyclopia,’ he explains, pointing to the single large eye in the centre of the hare’s face. Oddities from the animal kingdom hold a powerful sway over Link. His collection is also home to a two-headed calf.

He opens the glass door of an antique cupboard and takes out the embryo of a hare preserved in ethanol.

Link’s smorgasbord of curiosities takes me back to a different time – that of the late Renaissance and the Baroque period, when ‘cabinets of curiosities’ (or Wunderkammer as they are known in German) were all the rage. ‘Back then, well-off people would fill cabinets with souvenirs from their adventures and proudly show off their finds to friends and acquaintances,’ explains Link. According to the antique collector, cabinets of curiosities were the precursor to natural history museums.

He believes that collecting is ‘an attempt to bring order to the world.’ As a child, he collected shells and stones, and later graduated to flea market curios. Link initially completed a commercial apprenticeship before spending two years at the New York Film Academy. He then worked as an assistant director in Luxembourg. However, he admits that the film industry was simply too unforgiving an environment for him. Fifteen years ago, he ‘stumbled’ into the magic business. His first show involved doing card tricks with his brother in a bar in Zurich.

Fifteen years ago, he ‘stumbled’ into the magic business.

Working as a magician, he started to deal in special props from his shows. Link says his act started out small, and the days when he was a struggling artist are still fresh in his memory. In 2013, he had the chance to set up and furnish his own cupboard of wares at Contra-Punkt in Niederdorf – a popular spot for fans of vintage goods. He sold flea market treasures and fantasy creatures – which he called Finsterwaldfiguren, or characters from the dark forest – that he made himself from genuine animal bones. In the same year, he opened his first store, Panoptikum, which was followed by Wunderkammer on Sihlfeldstrasse. He says that it was initially difficult to keep his head above water through the sale of antiques and taxidermy. Now, though, he’s made a name for himself.

Today, Wunderkammer is an established address for new and antique animal mounts. Operating out of Neumarkt 17, the store’s wares decorate the shop windows of prominent businesses throughout Zurich – one of which is Friolet Interiors. Link’s pop-up store on Kirchgasse, which he ran together with an art dealer, closed last January. ‘I’m not one to simply sit around all day behind the till,’ he states. He recently opened a display space in Zurich’s Aussersihl district, which is where he invited me to meet him today.

He wears two Art Nouveau rings that catch the light, and only now do I notice the scarab beetle pinned to his jacket. The man’s remarkable appearance is reminiscent of a dandy. For Link, taste is a serious business,. especially when it comes to presenting his animal mounts: ‘I’m not interested in things that make people laugh. My eye is drawn to exclusive items.’ He gets out his smartphone and shows me a photo of his latest acquisition: an elephant bird’s egg which is several hundred years old. Found in Madagascar, the egg – which had been smashed to pieces – has been painstakingly reassembled from fragments.

His latest acquisition: an elephant bird’s egg from Madagascar which is several hundred years old.

Link works with four taxidermists who are in close contact with wildlife parks and zoos. These experts alert him to new additions to his collection on a regular basis. ‘Taxidermists are true artists,’ asserts Link. Two taxidermists would need to work for a month to turn a dead lion into a realistic-looking exhibit.

Two taxidermists would need to work for a month to turn a dead lion into a realistic-looking exhibit.

The concept of ‘stuffing’ an animal has nothing to do with the reality of taxidermy today. ‘The animals are not stuffed. A pelt or coat of feathers is attached to an animal body made of plastic,’ explains Link. Other than the pelt or feathers, he says, an animal mount doesn’t actually have much of the animal left in it.

Link dreams of opening his own museum one day. He believes it would also be the perfect place to do magic: ‘I want to amaze my visitors and arouse their curiosity,’ he says. His eyes sparkle at the idea. Who knows: maybe this space will prove to be the start of a dream that becomes a reality.