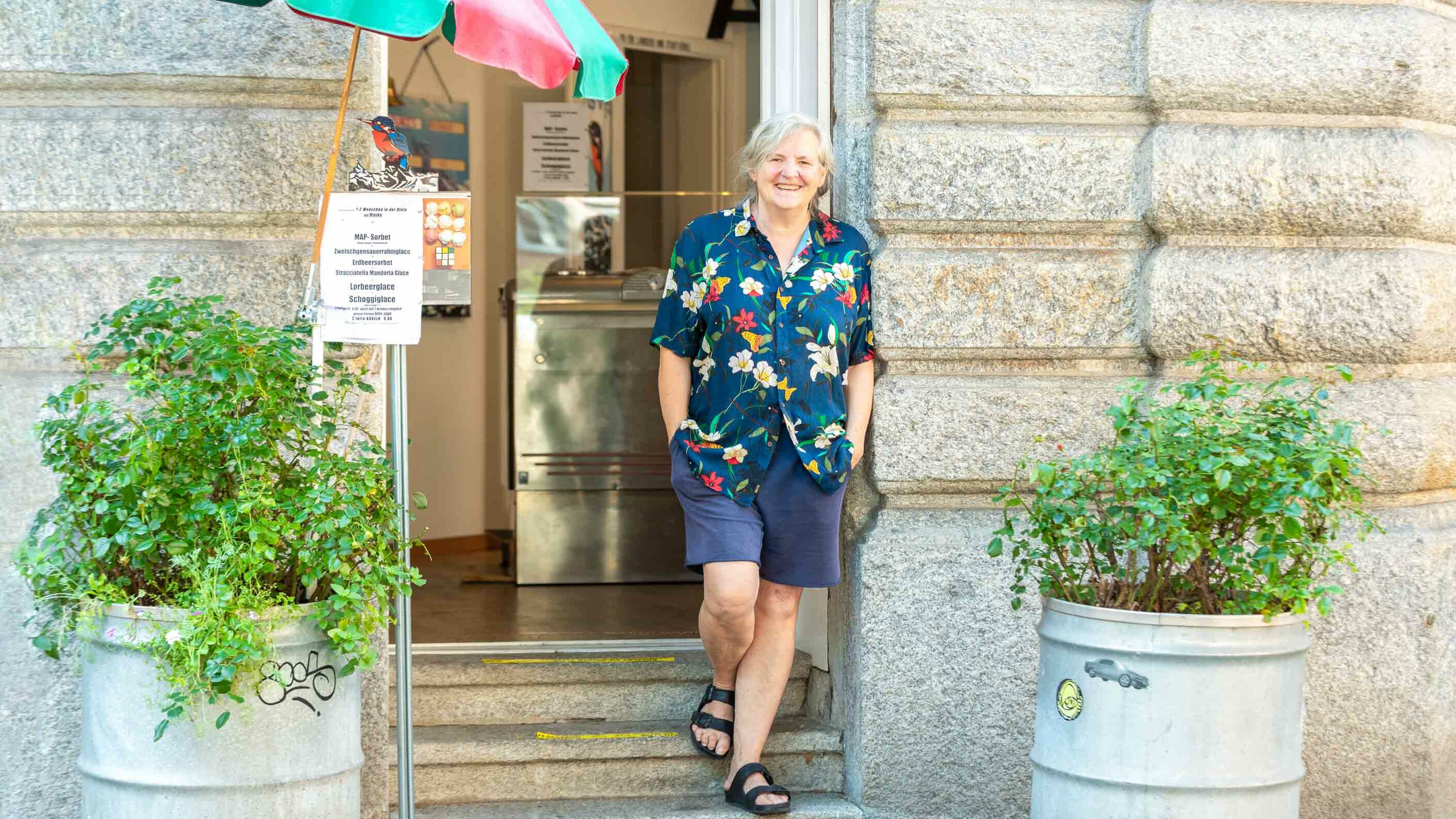 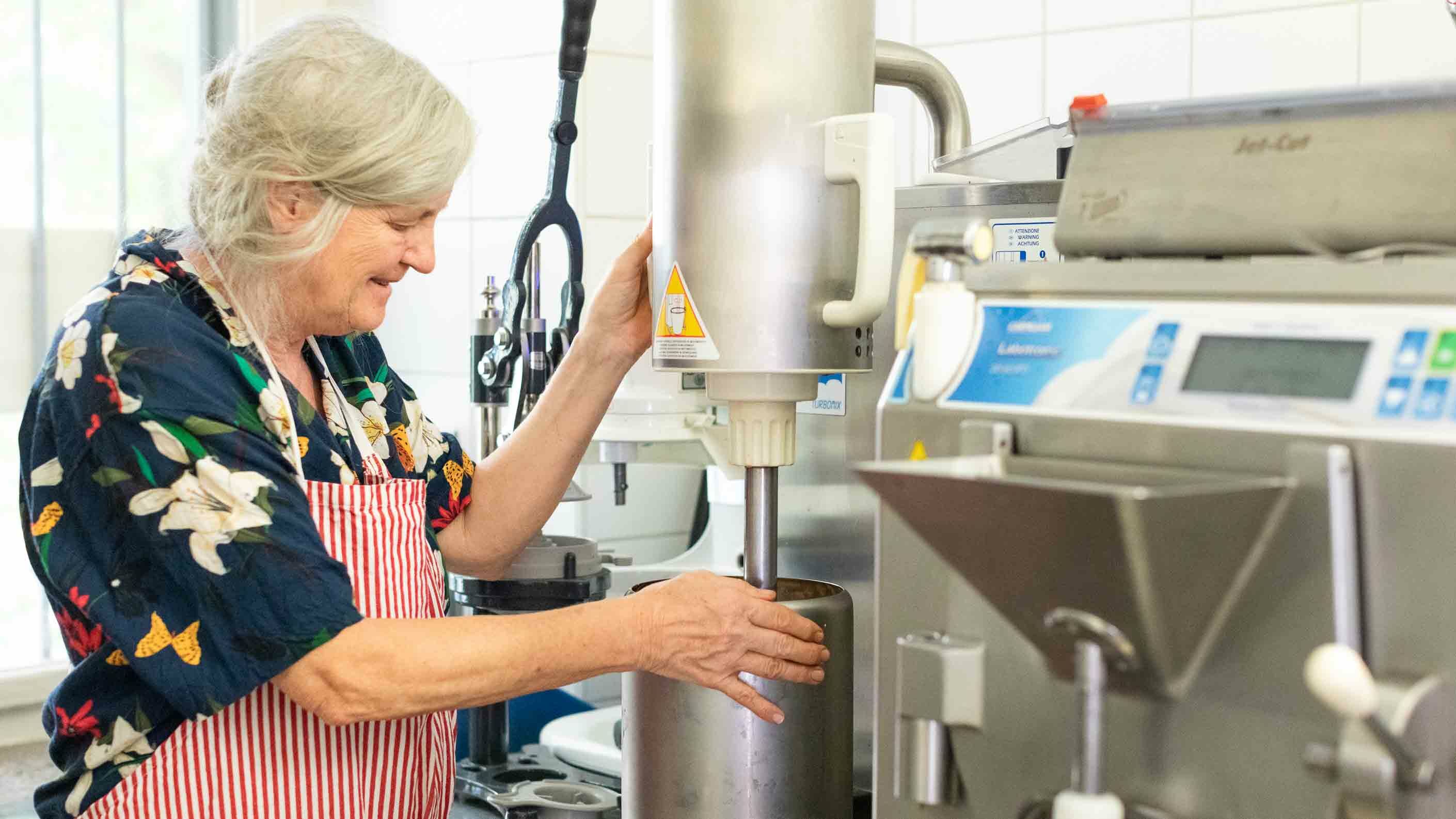 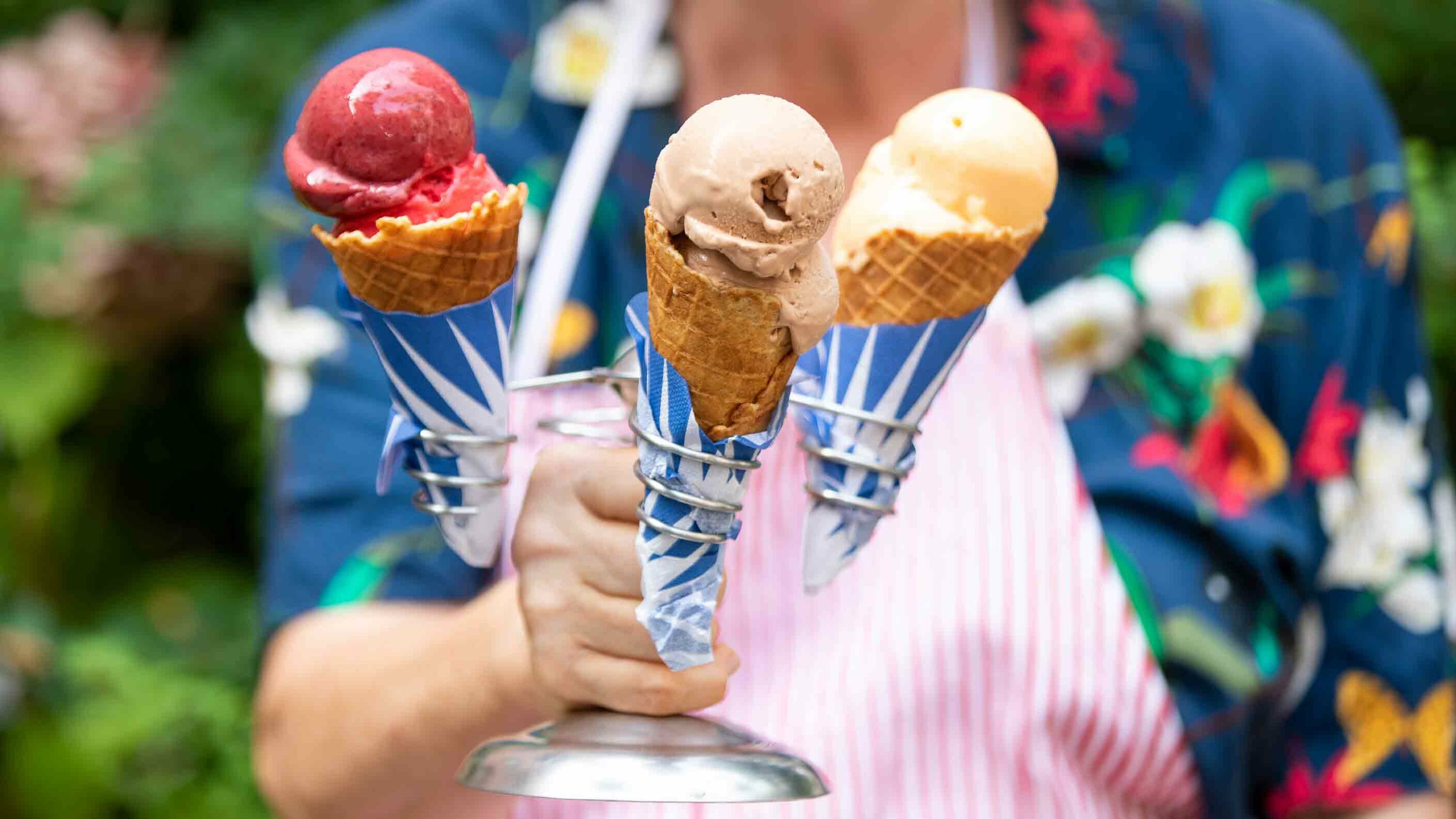 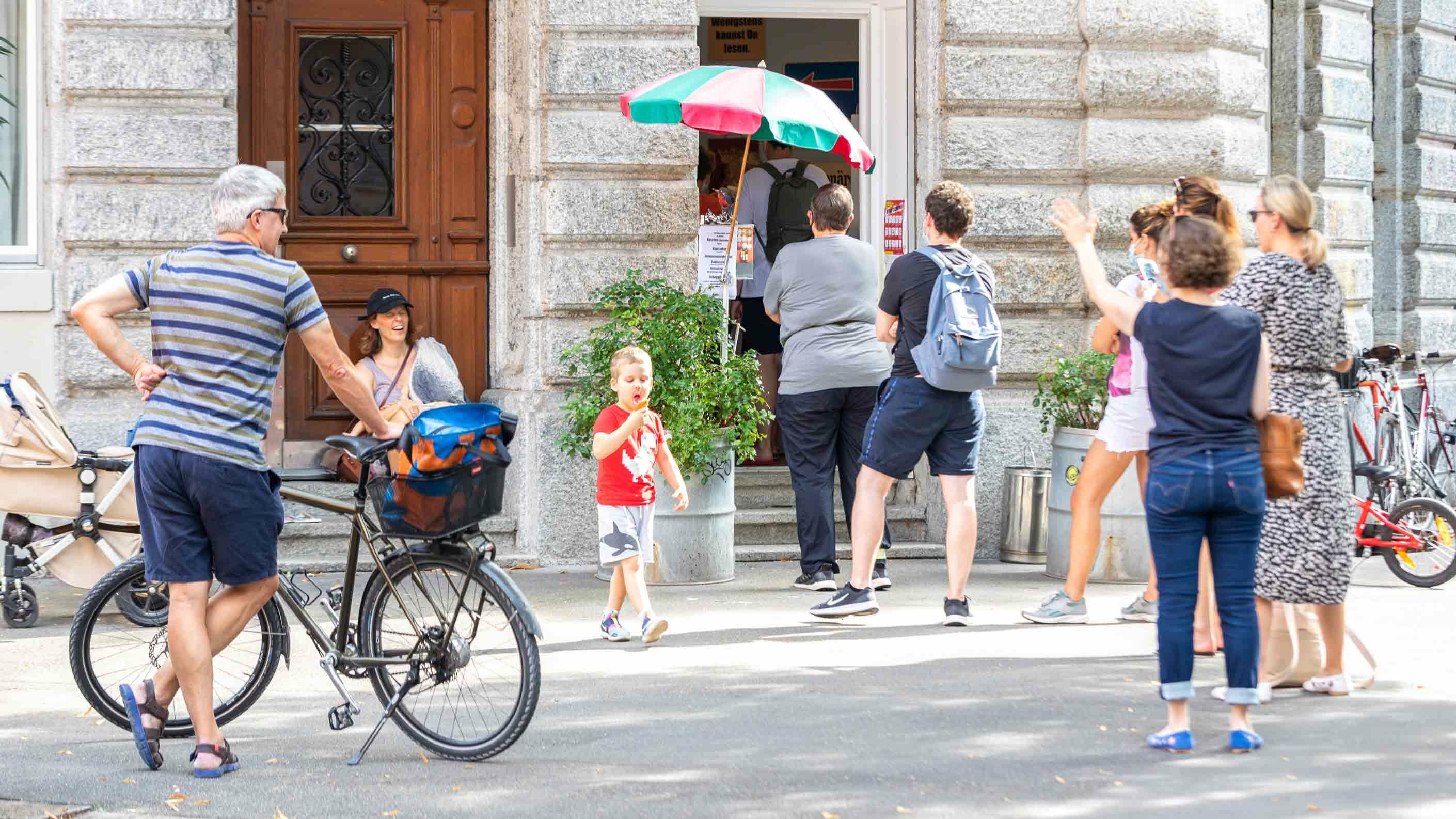 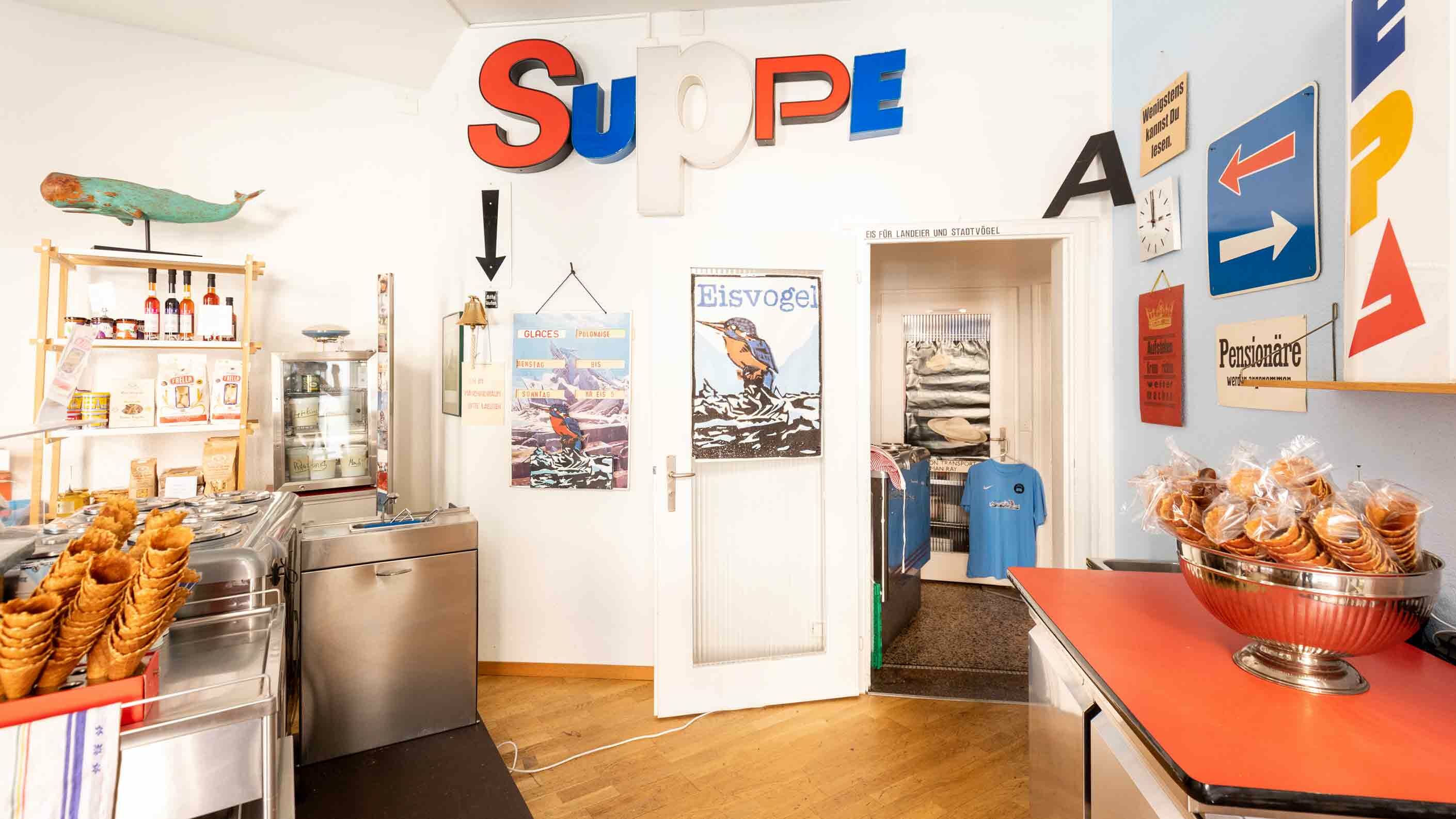 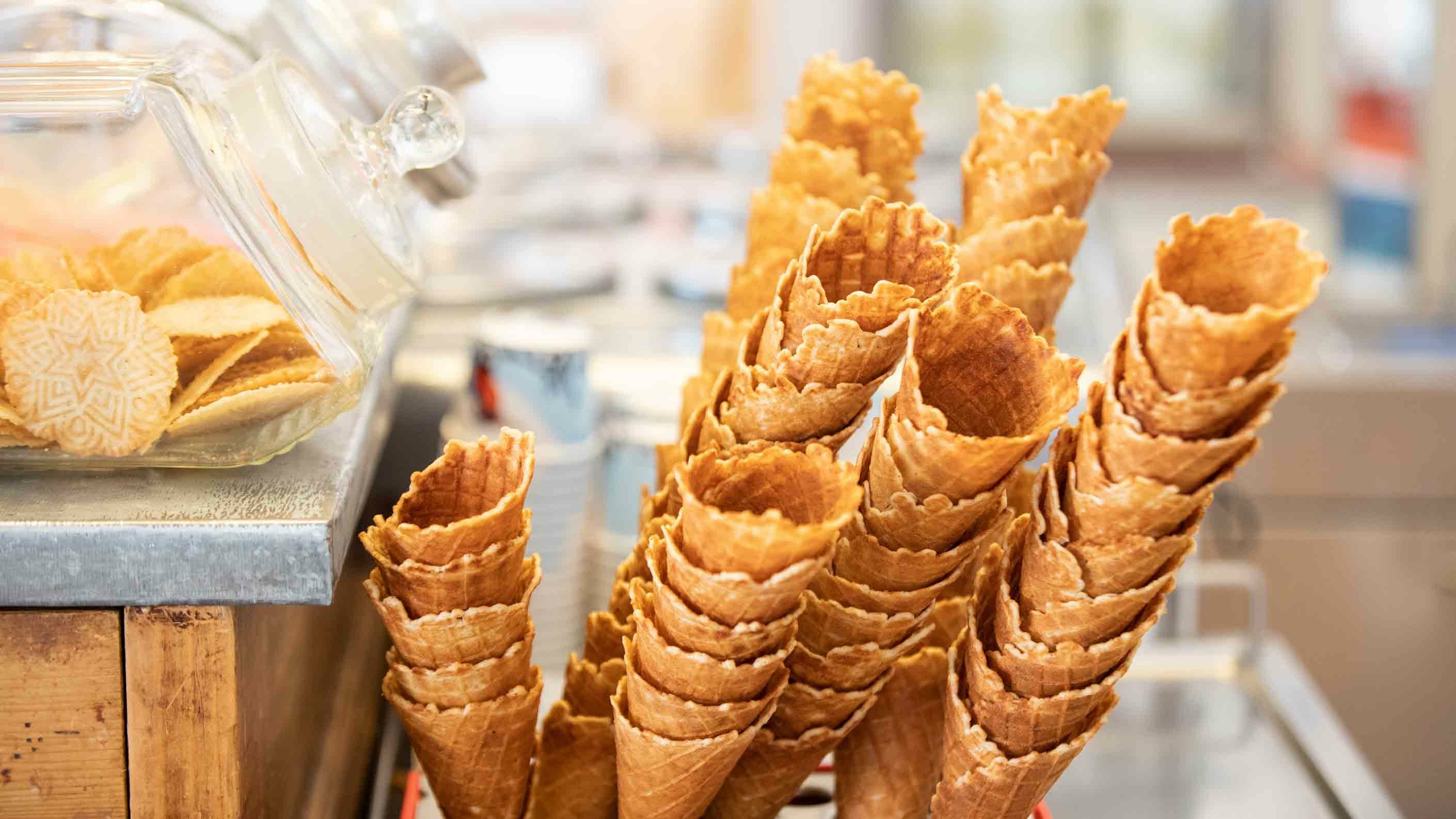 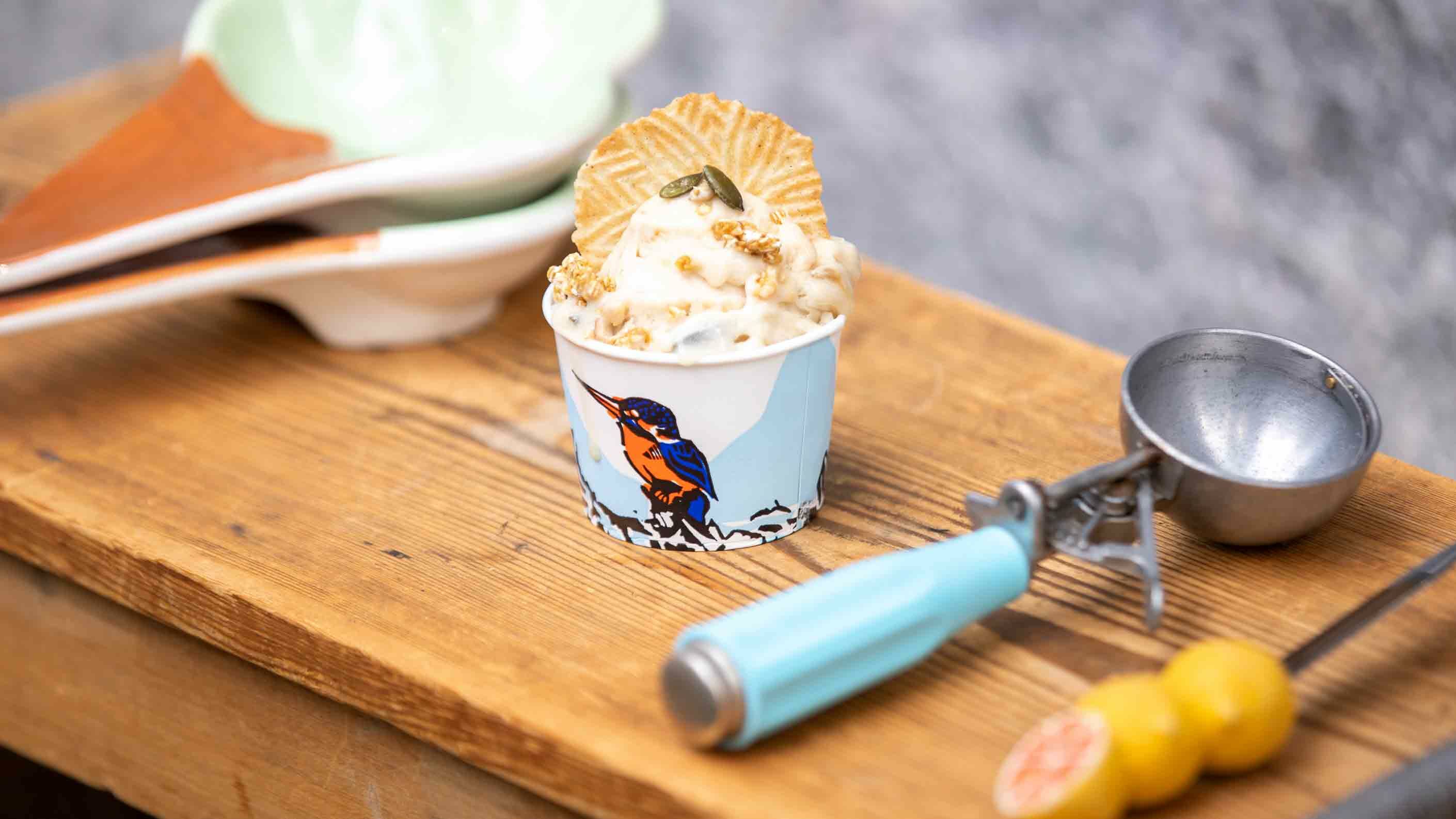 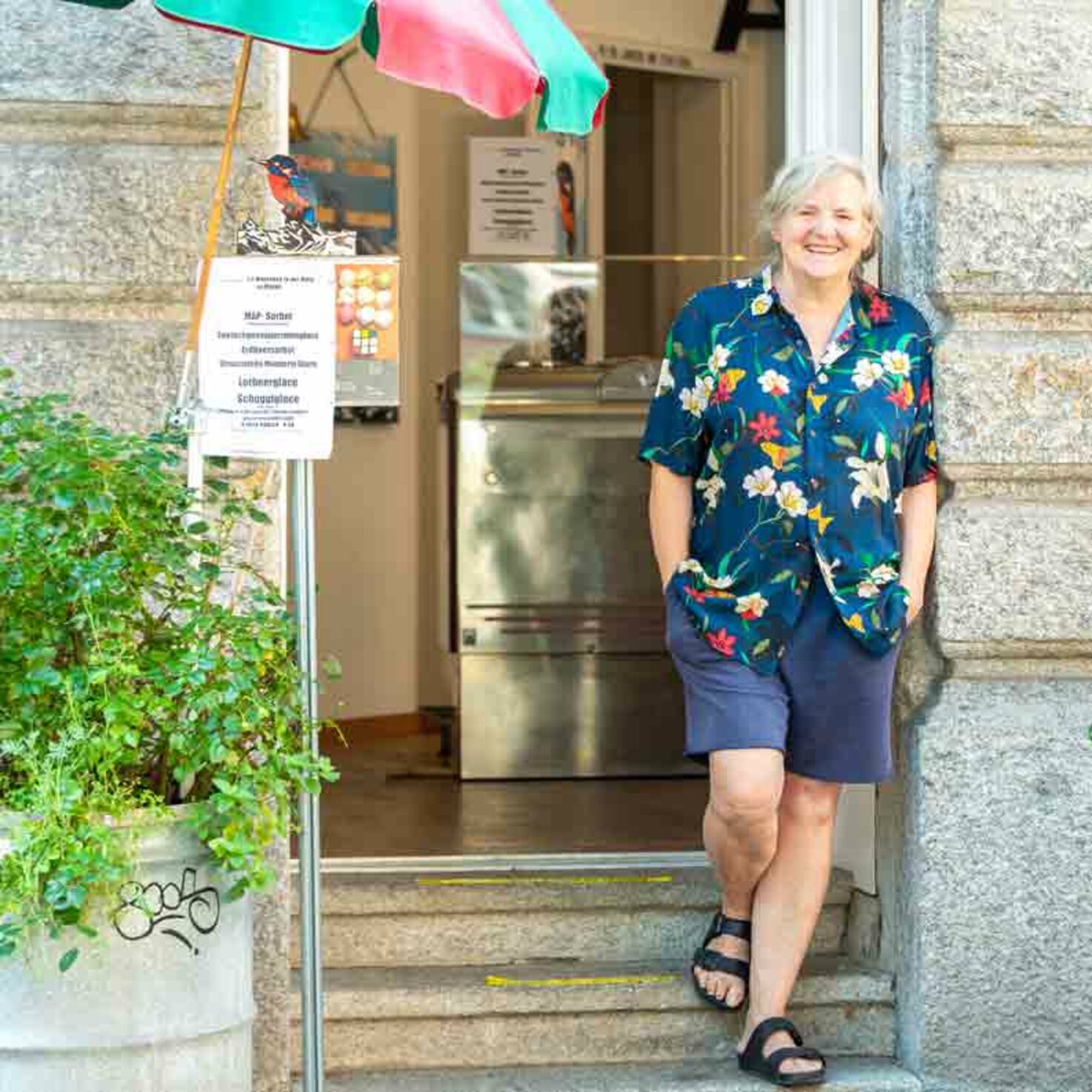 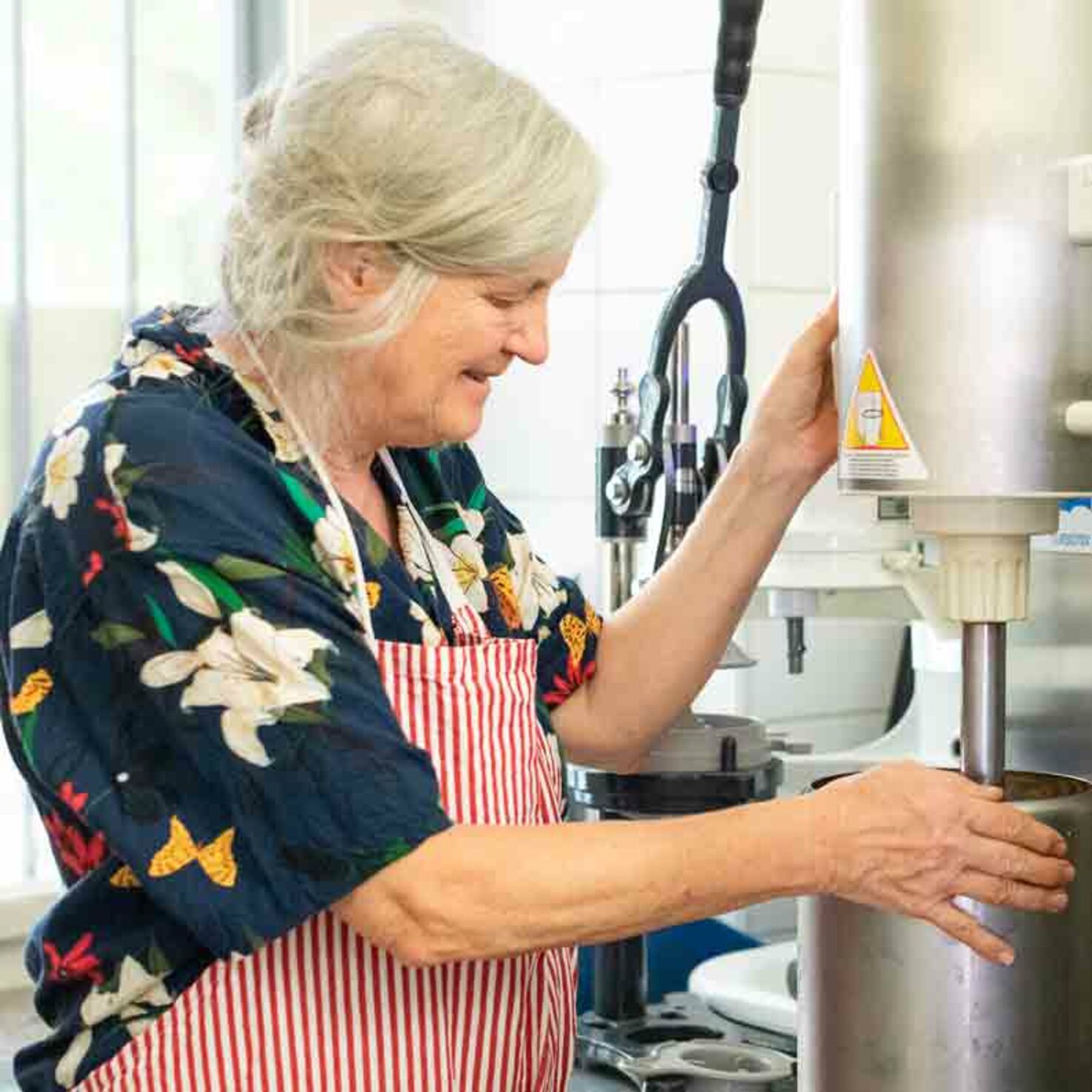 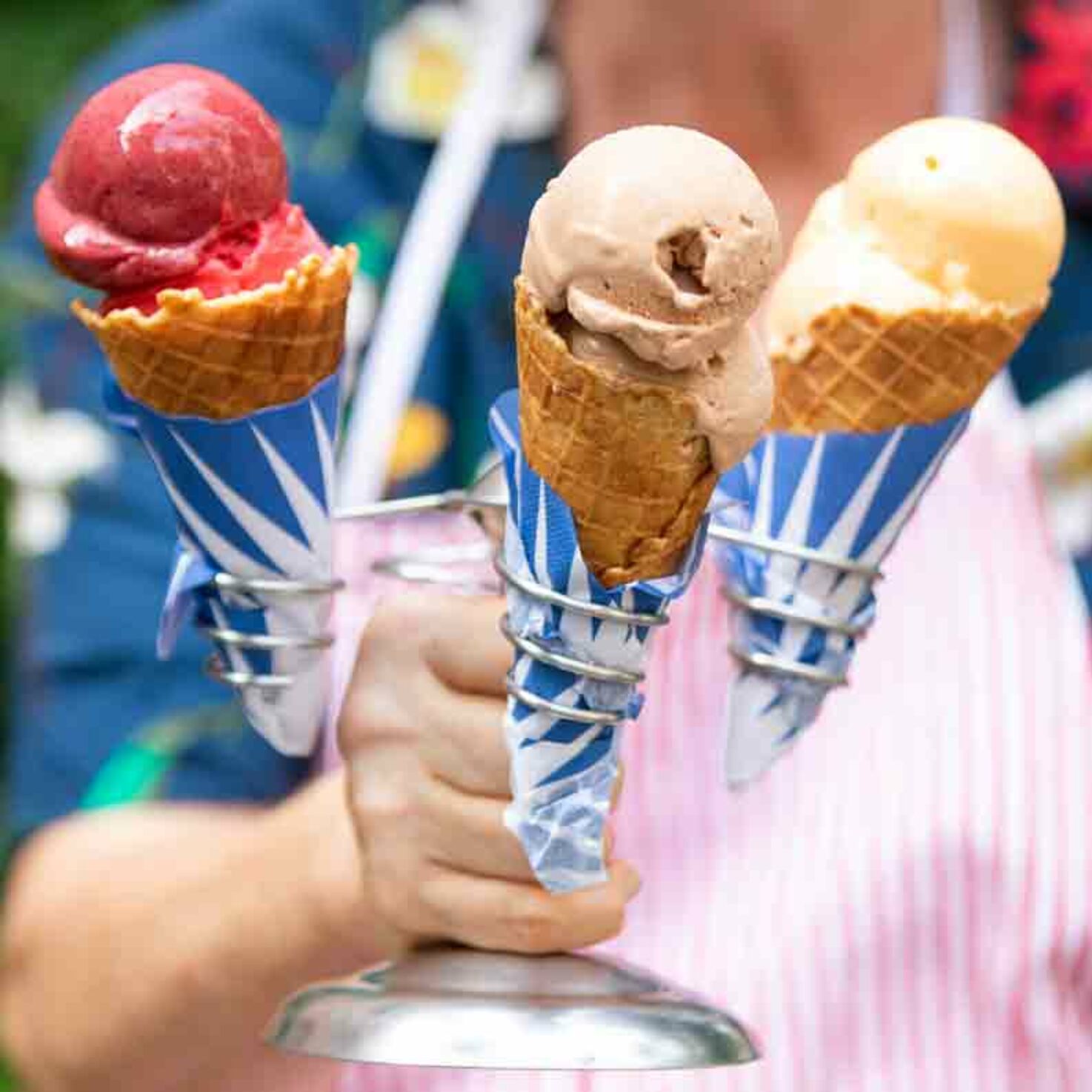 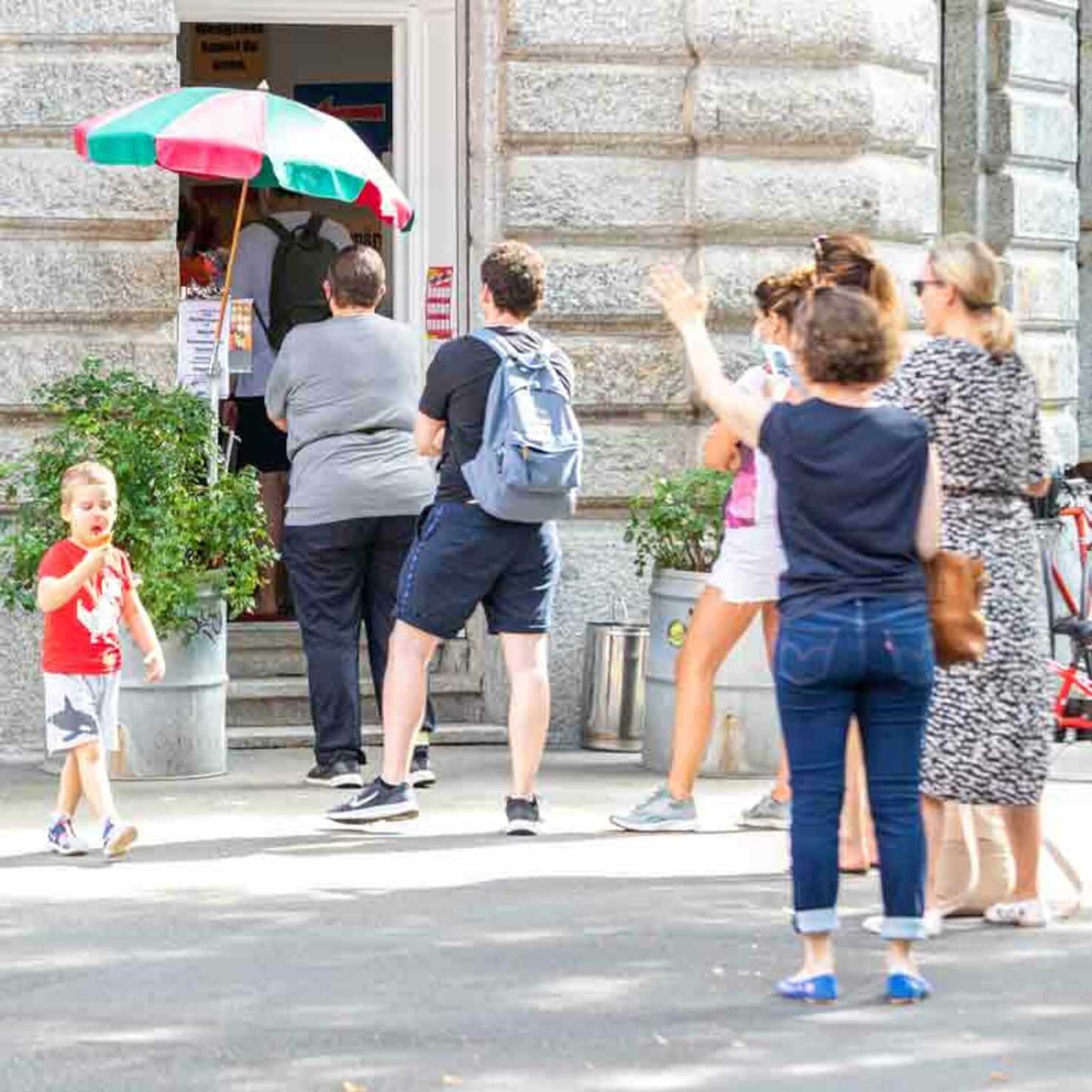 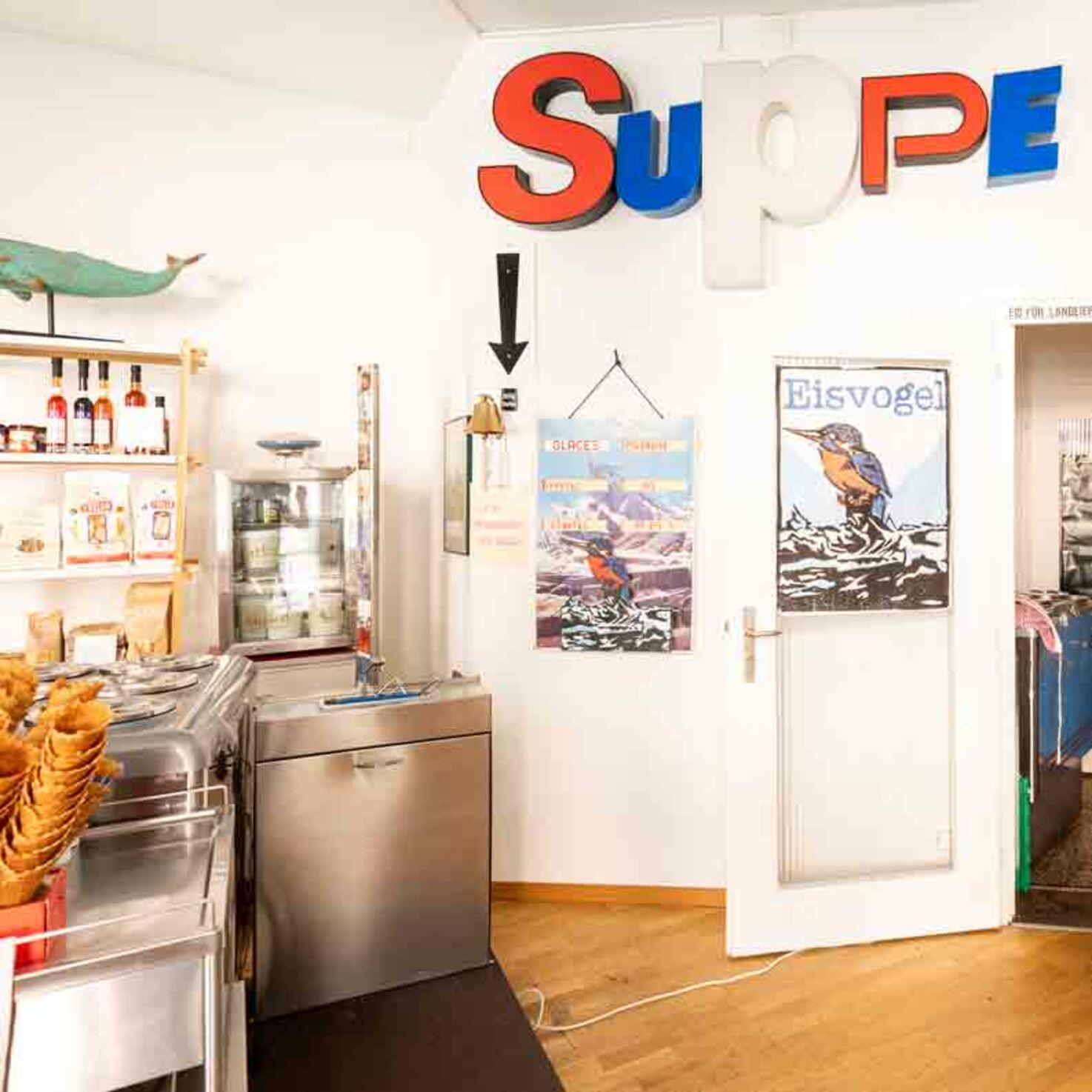 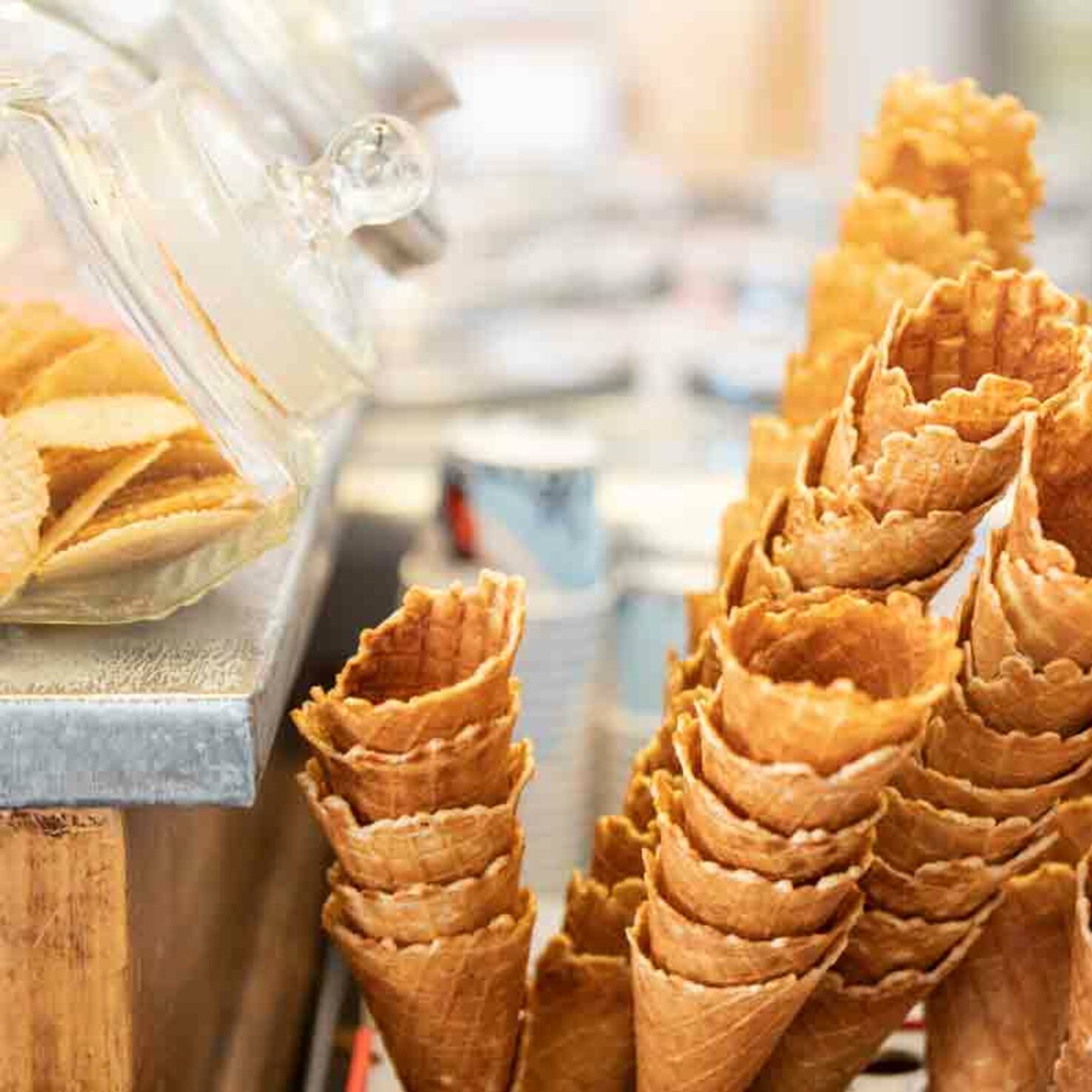 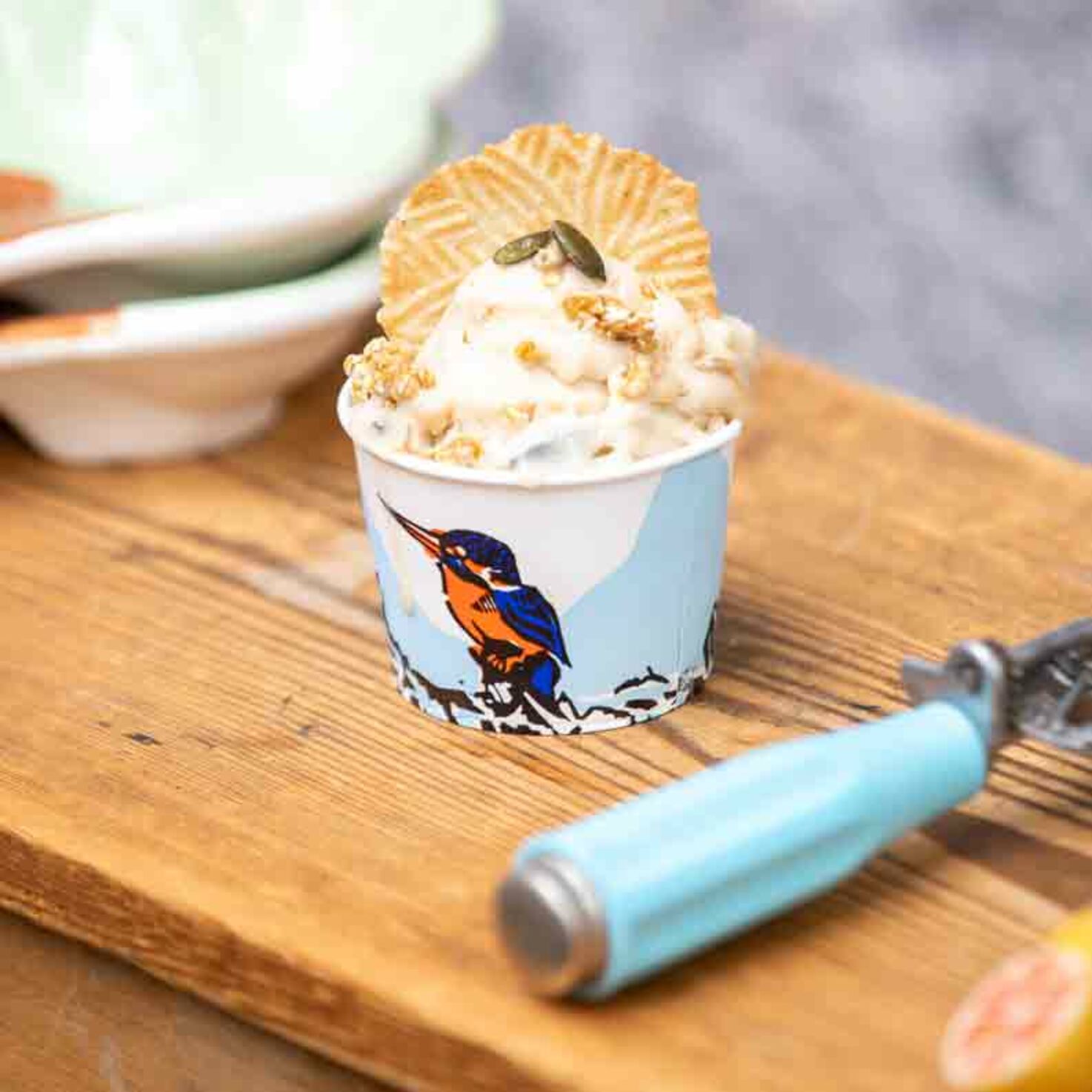 Zentrale für Gutes is a popular spot in district 5, where Tine Giaccobo makes six flavours of ice cream every day, often using fruit from the local area as an ingredient.

Fruit from the local area is quite often used in the Eisvogel (kingfisher) ice creams made by Tine Giaccobo and Katharina Sinniger, and they offer six types of homemade, seasonal ice cream every day at Zentrale für Gutes. The two owners have been firm fixtures of district 5 for decades.

When is ice cream season? It begins when people slowly start returning to the quiet streets of district 5. When there are fewer and fewer winter coats, and more and more greetings being called from one side of the road to the other. When it’s warm enough for children to be running around outside again. The season begins when Tine is asked: when are you starting up again? That’s roughly when the ice cream season starts at Zentrale für Gutes, where Tine Giaccobo and Katharina Sinniger serve homemade ice cream under the name Eisvogel.

The shop is located near the Josefswiese park, but not right next to it. Near the viaduct arches, but not in them. There’s ice cream, but no coffee or beer out of solidarity with the surrounding bars and cafés. You’ll rarely pass by the Zentrale by chance, but the locals are well aware of it nevertheless. That’s confirmed by the number of people waiting to be served at the small corner shop, where they have the choice of six flavours of ice cream. Every day. No more. Always different.

Ice cream for the season

Having six different flavours of ice cream every day is a trademark of Zentrale für Gutes. ‘It means I can react immediately,’ says Tine, and by that she means that she can react to the neighbourhood. Sometimes a customer might say they have way too many currants. Another time, a customer might bring in Cornelian cherries from their garden. Or someone says Tine and Katharina can help themselves to their fig tree by the Limmat.

And that’s why the Eisvogel flavours vary so that they can react to such opportunities – and to the seasons. Whether it’s rhubarb, grape, strawberry or plum ice cream of course depends on the season. Herbs like rosemary and thyme also feature in the variety of flavours at the Zentrale, as do exotic fruits thanks to collaboration with a sustainably minded distributor. The main principle is that the ingredients are real, ‘that at some point I had them in my hands,’ as Tine puts it. The pair’s ice creams are so popular that there’s even going to be a book about them.

A project for fun

The partnership isn’t a new thing: Tine Giaccobo and Katharina Sinniger ran the nearby Alpenrose restaurant together for 22 years. They’ve also lived in district 5 for even longer than that. Zentrale für Gutes is now a project for fun, at first for Tine on her own, then soon after run with Katharina as well. In the first few years they also served soups in winter, but that was so popular that the resulting stress contradicted their original motivation.

So now it’s Eisvogel ice cream all the way, from early spring until the last day of school before the autumn holiday, when there’s a whole day where people can devour an unlimited quantity of ice cream. ‘The amount of ice cream the kids can put away on that day…’ laughs Tine. ‘And then they come back with their parents and act as if it’s their first time.’ Tine plays along, of course.

After that, she closes the doors to Zentrale für Gutes, tidies up, cleans and turns off the machines. Then it’s all quiet in the shop on the corner of Ottostrasse and Albertstrasse, and the kingfisher goes into hibernation until the start of spring, when the streets of district 5 slowly get busier, when it’s time for ice cream again.