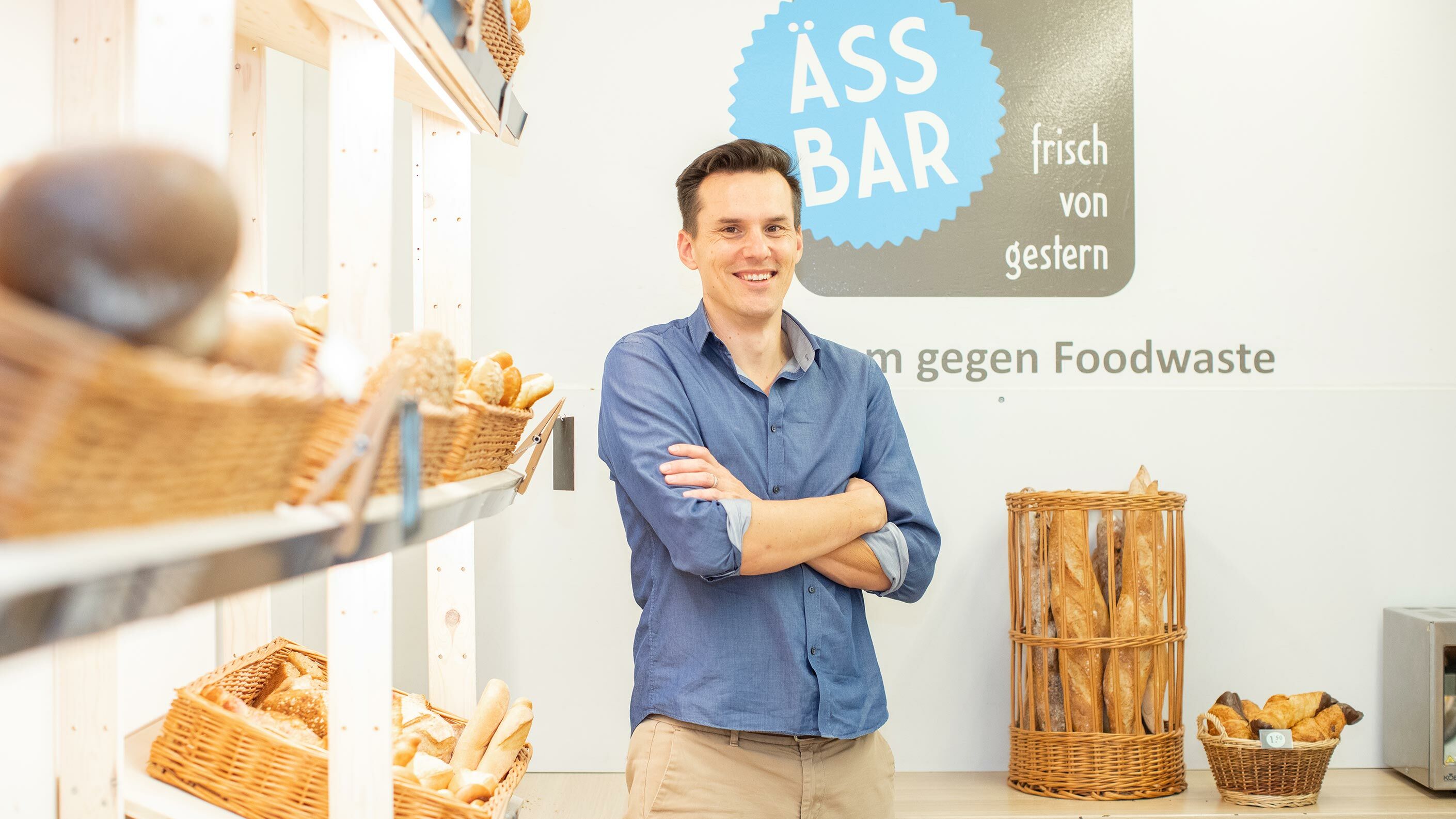 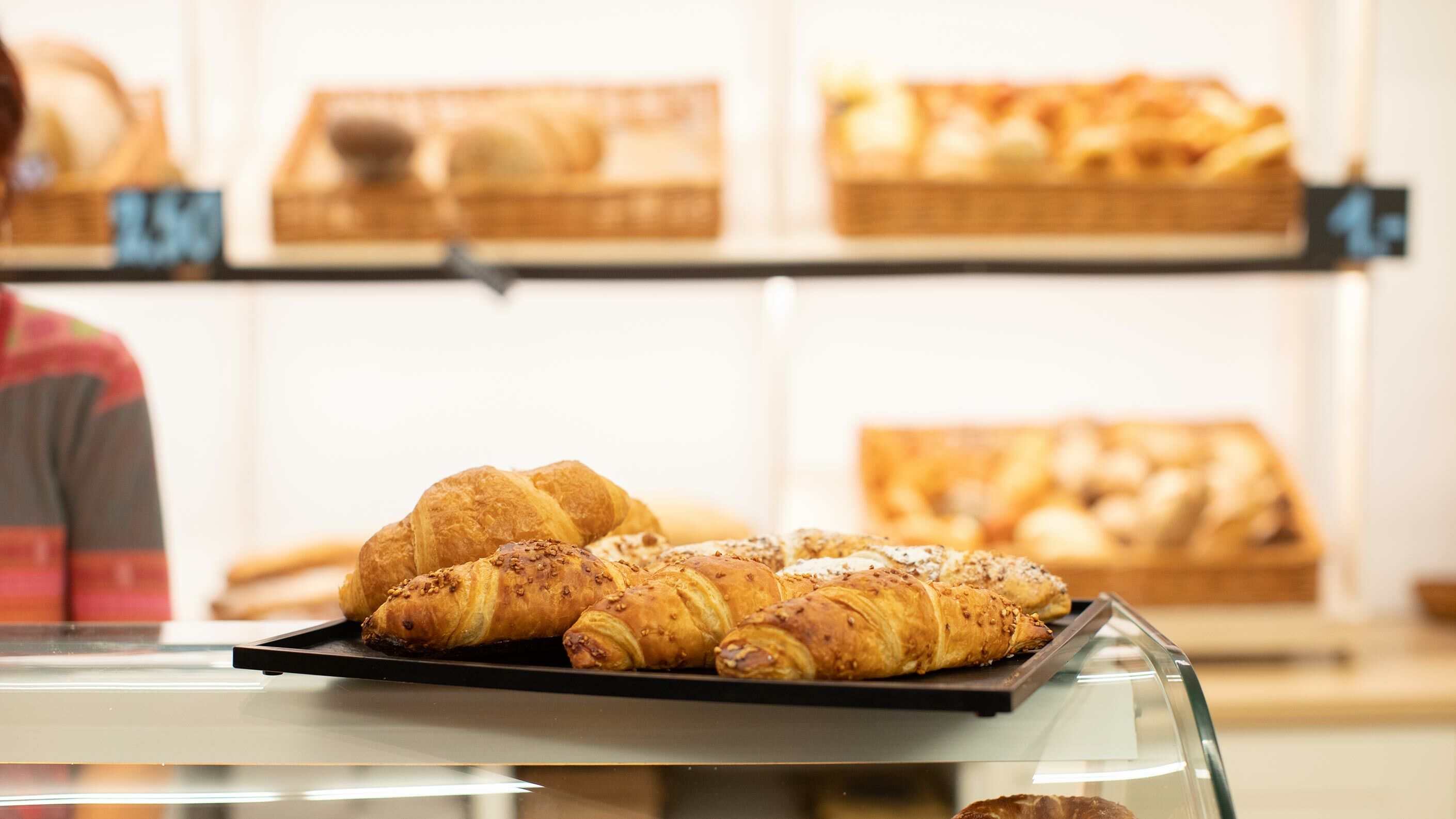 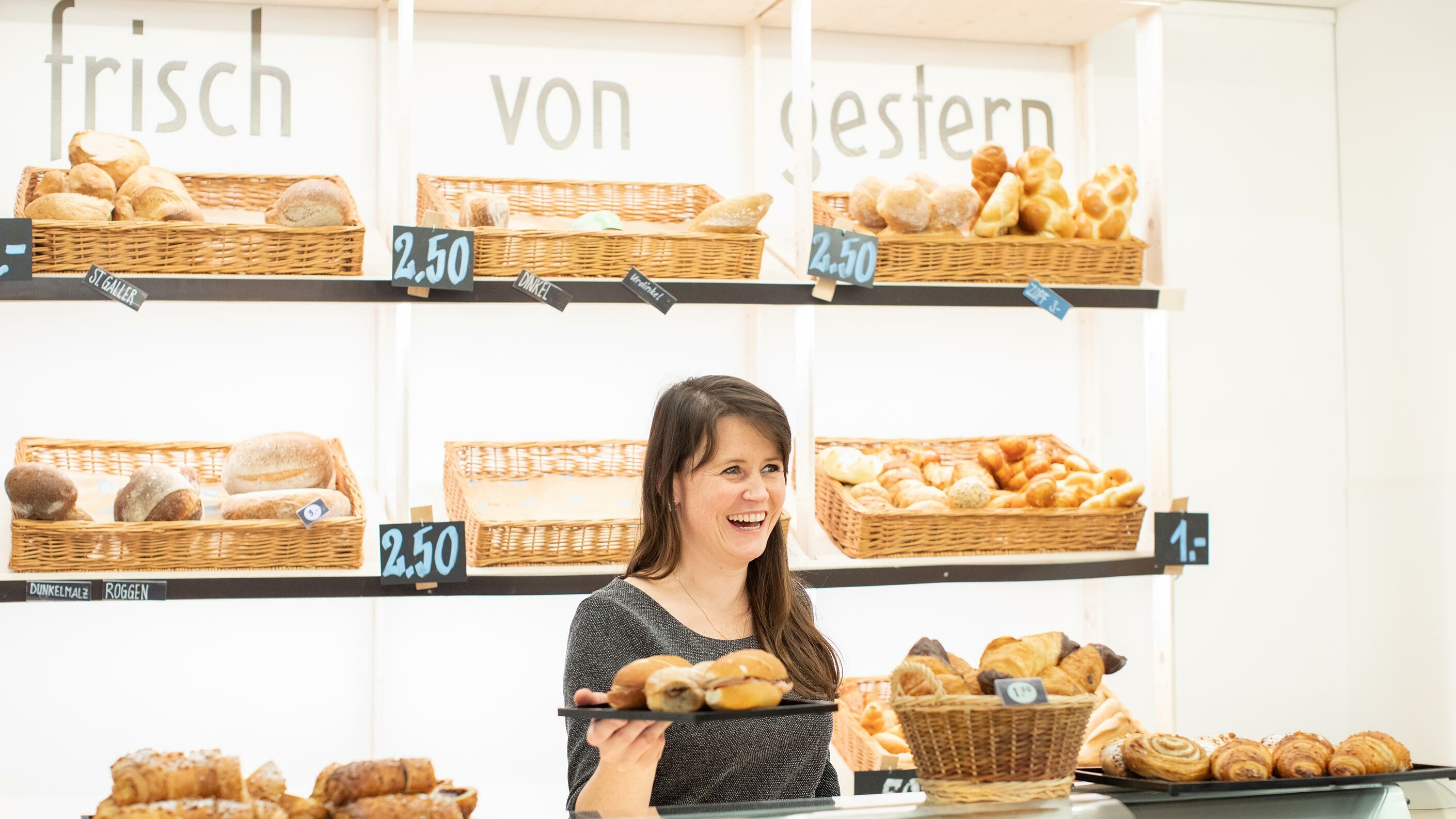 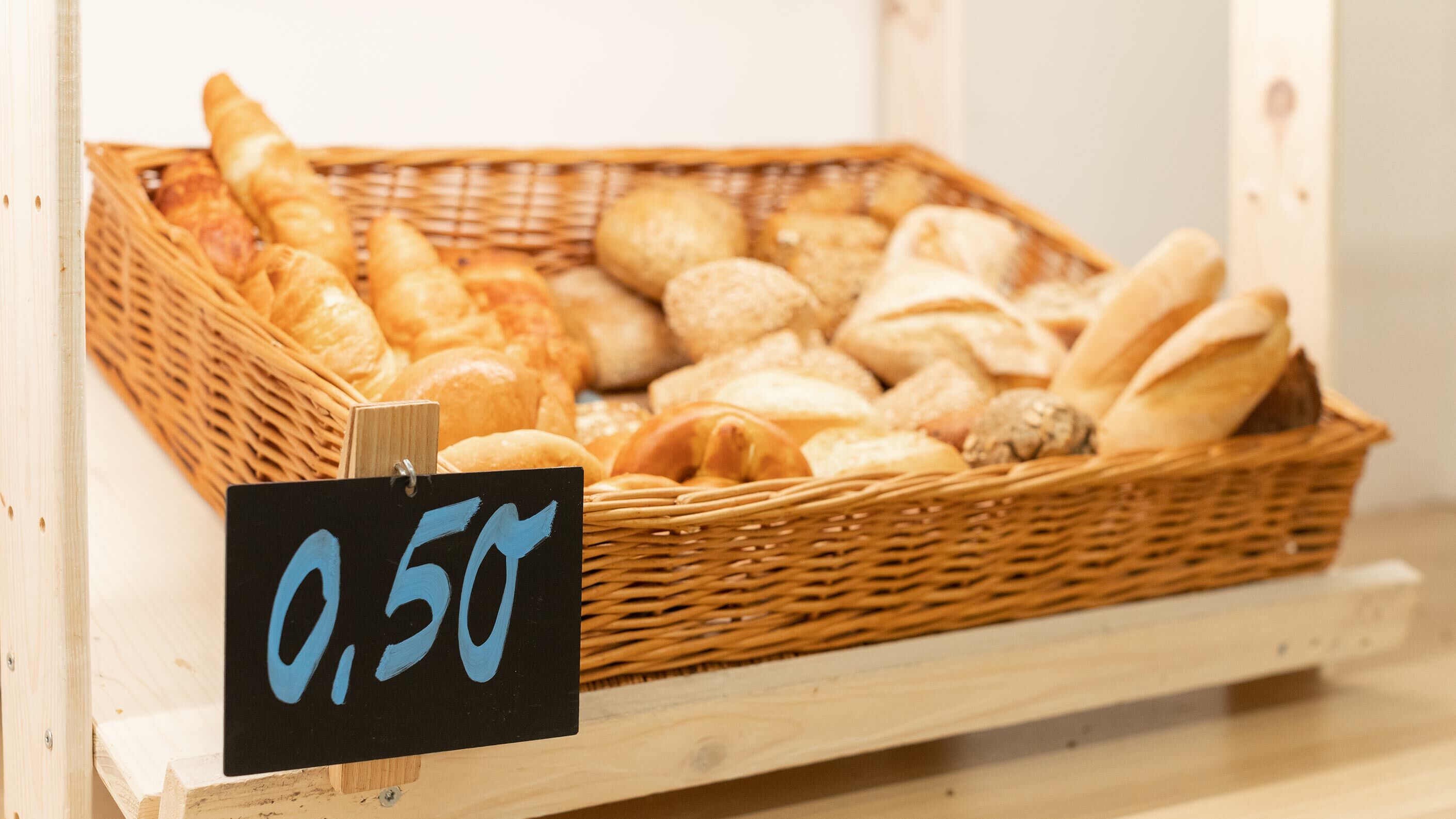 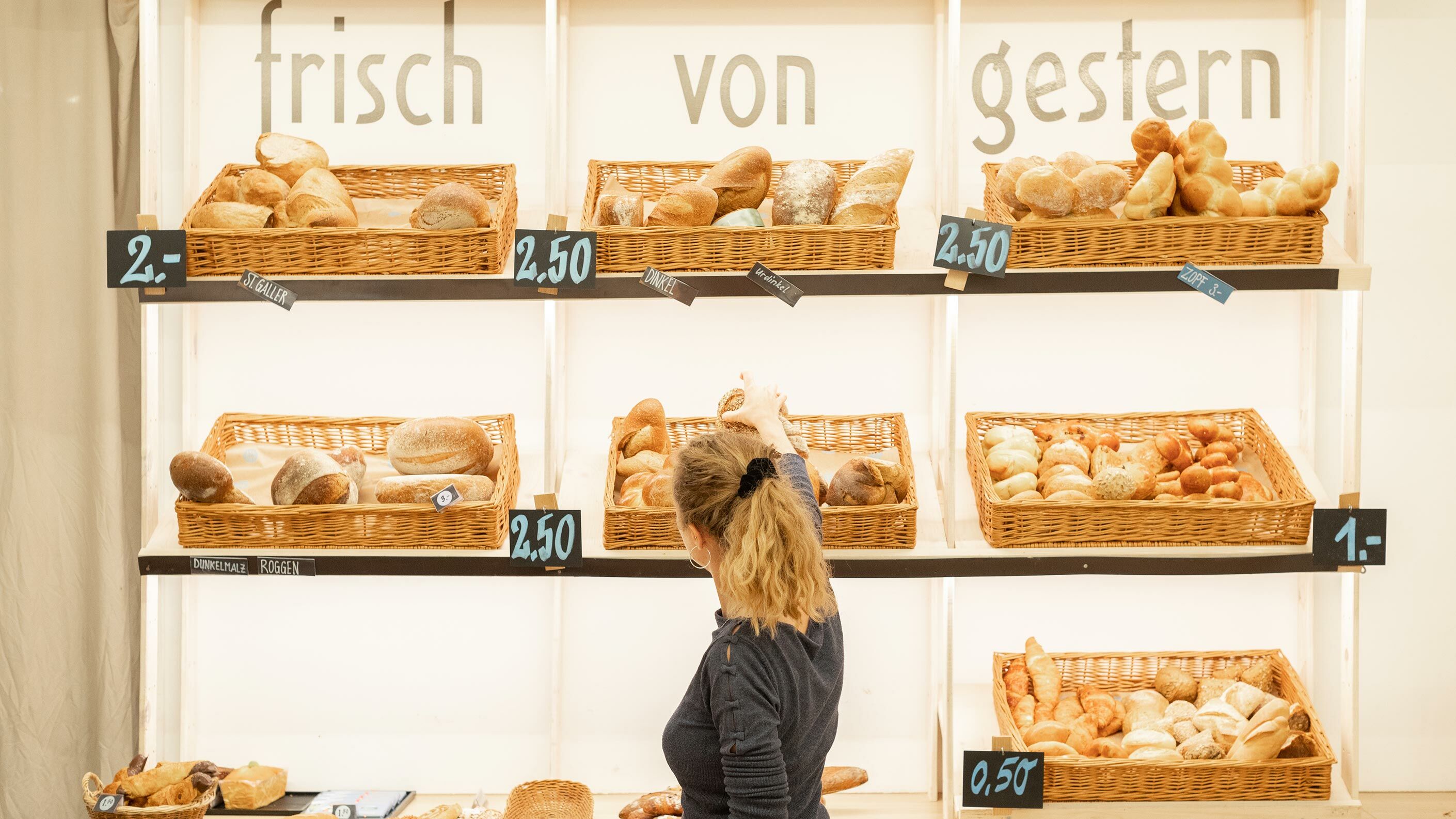 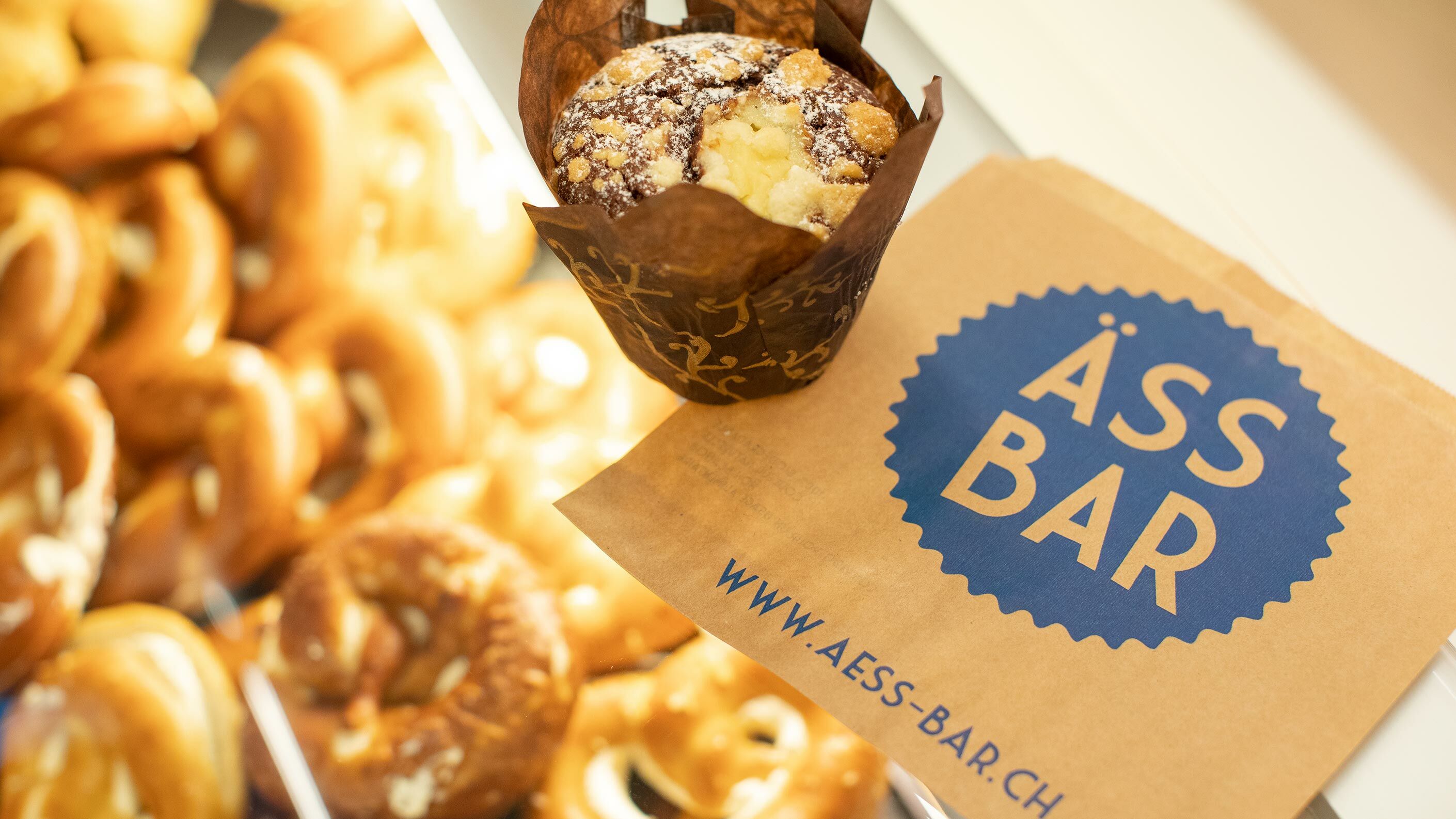 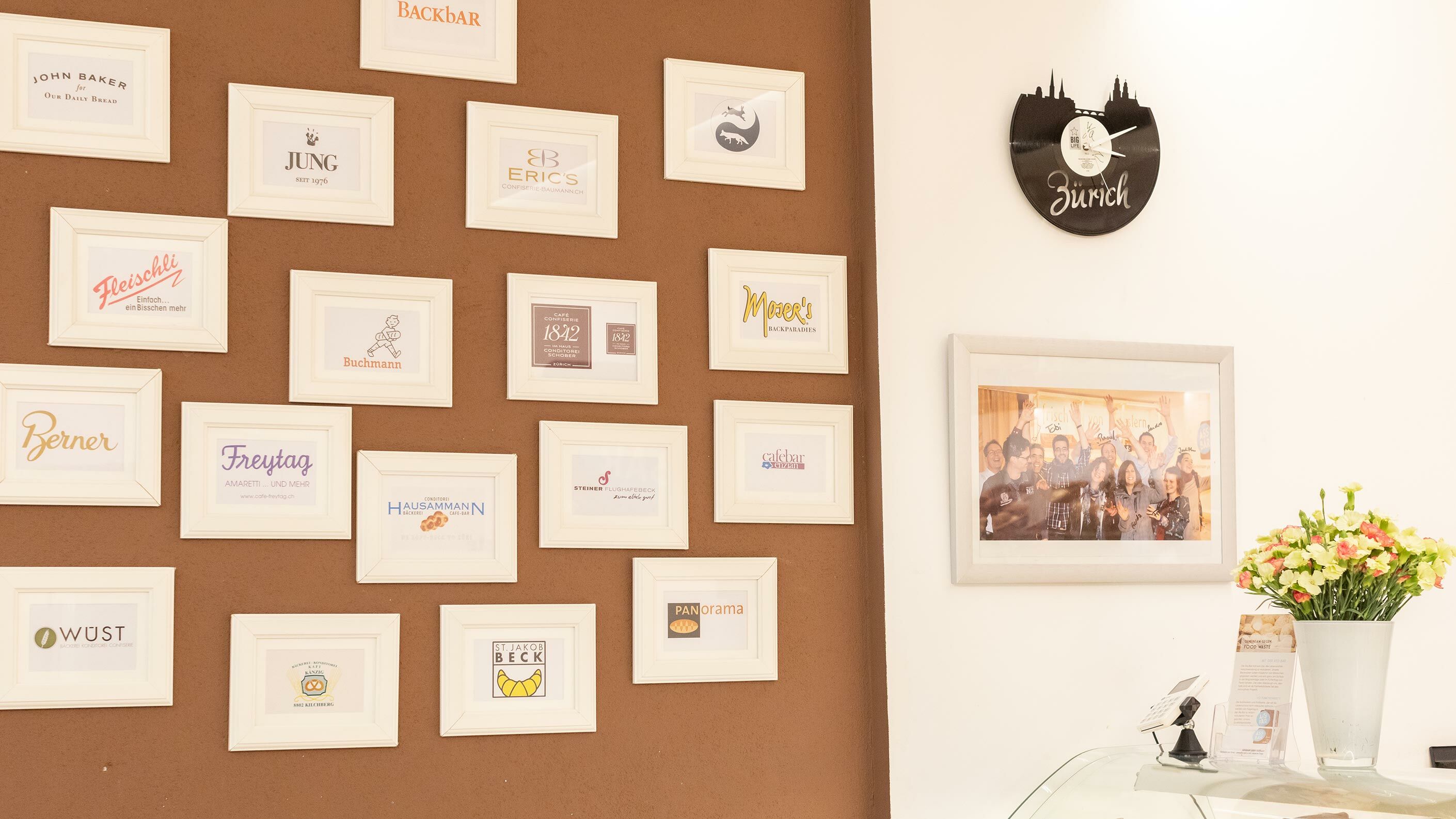 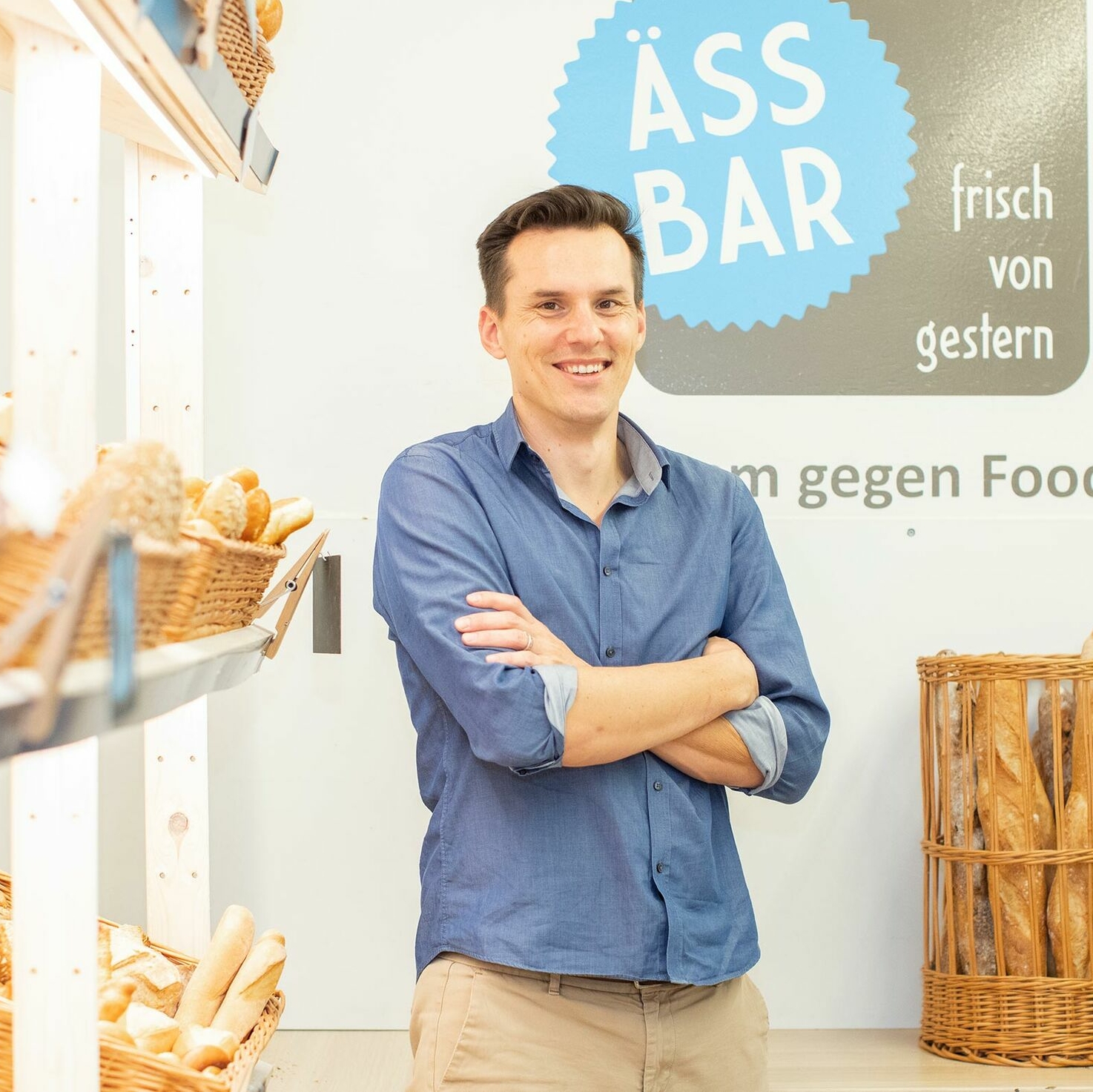 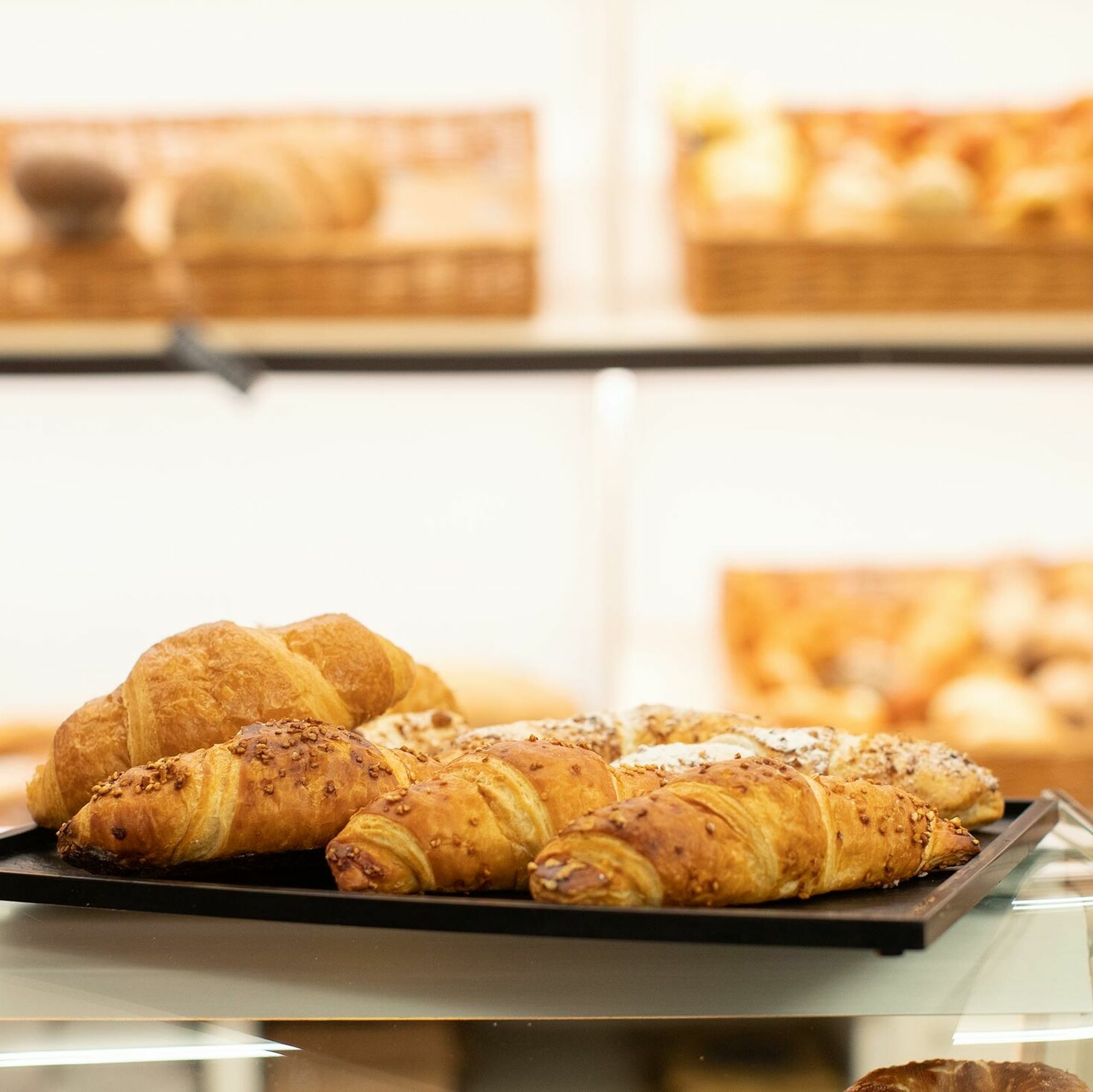 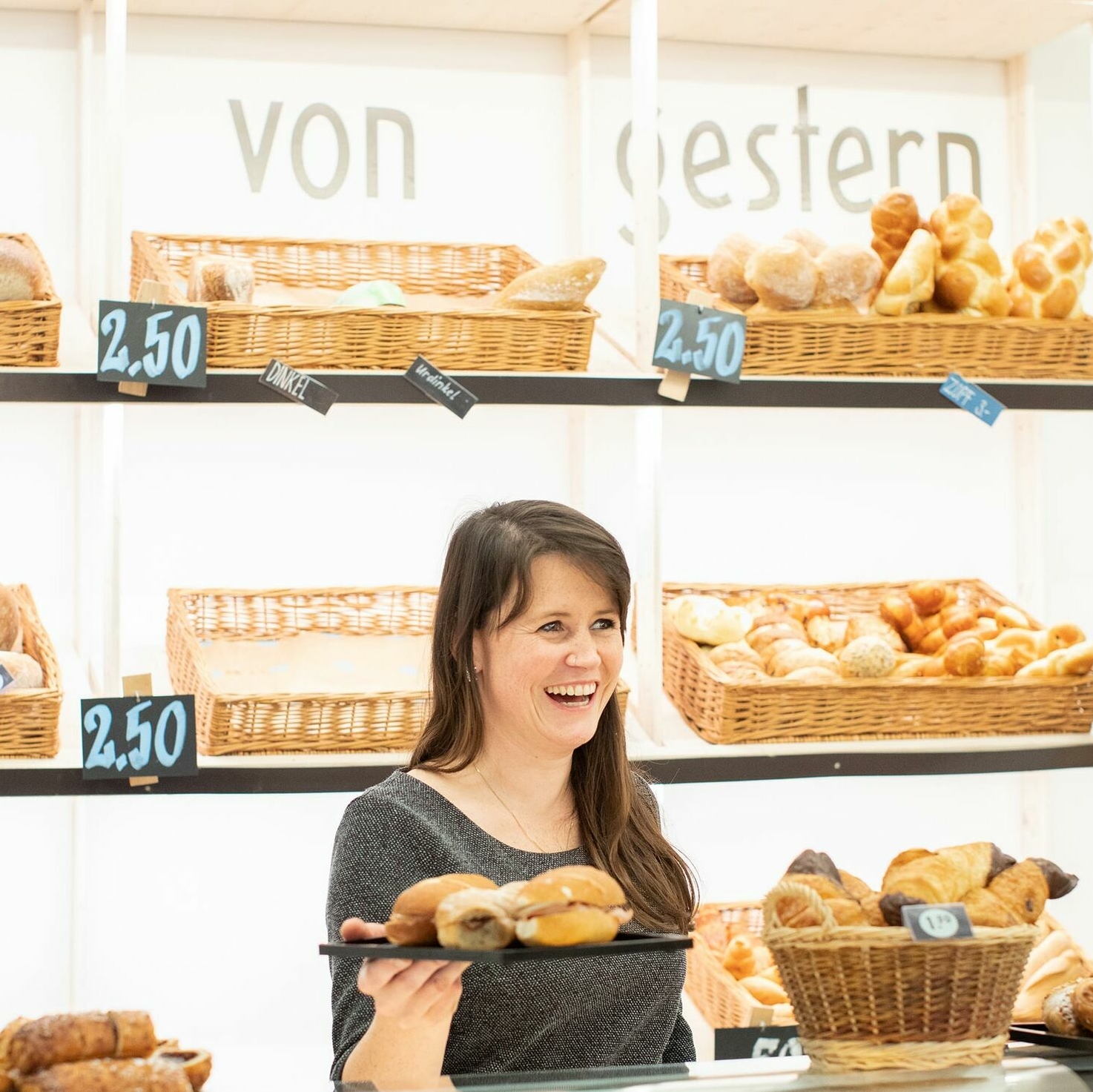 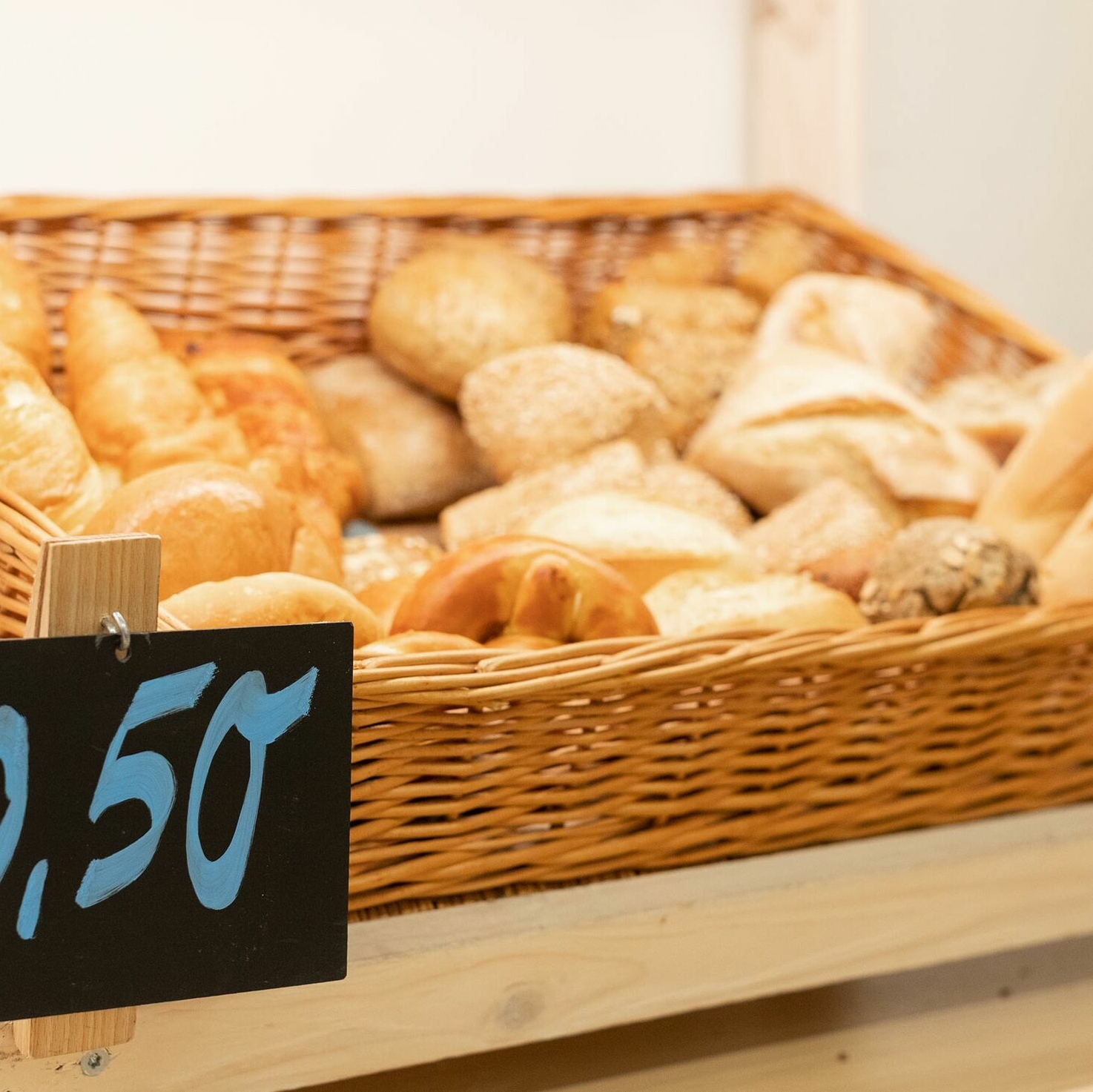 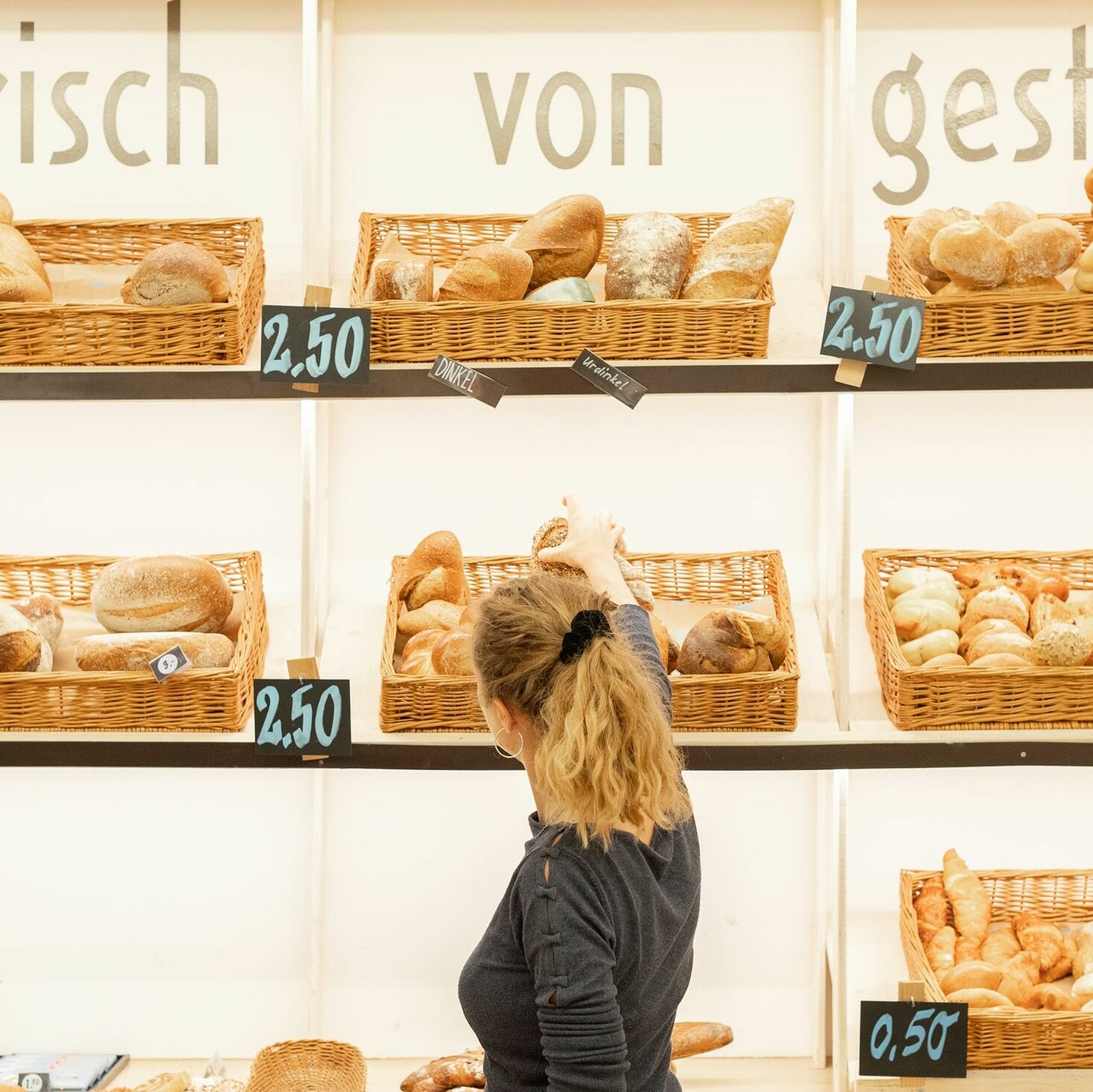 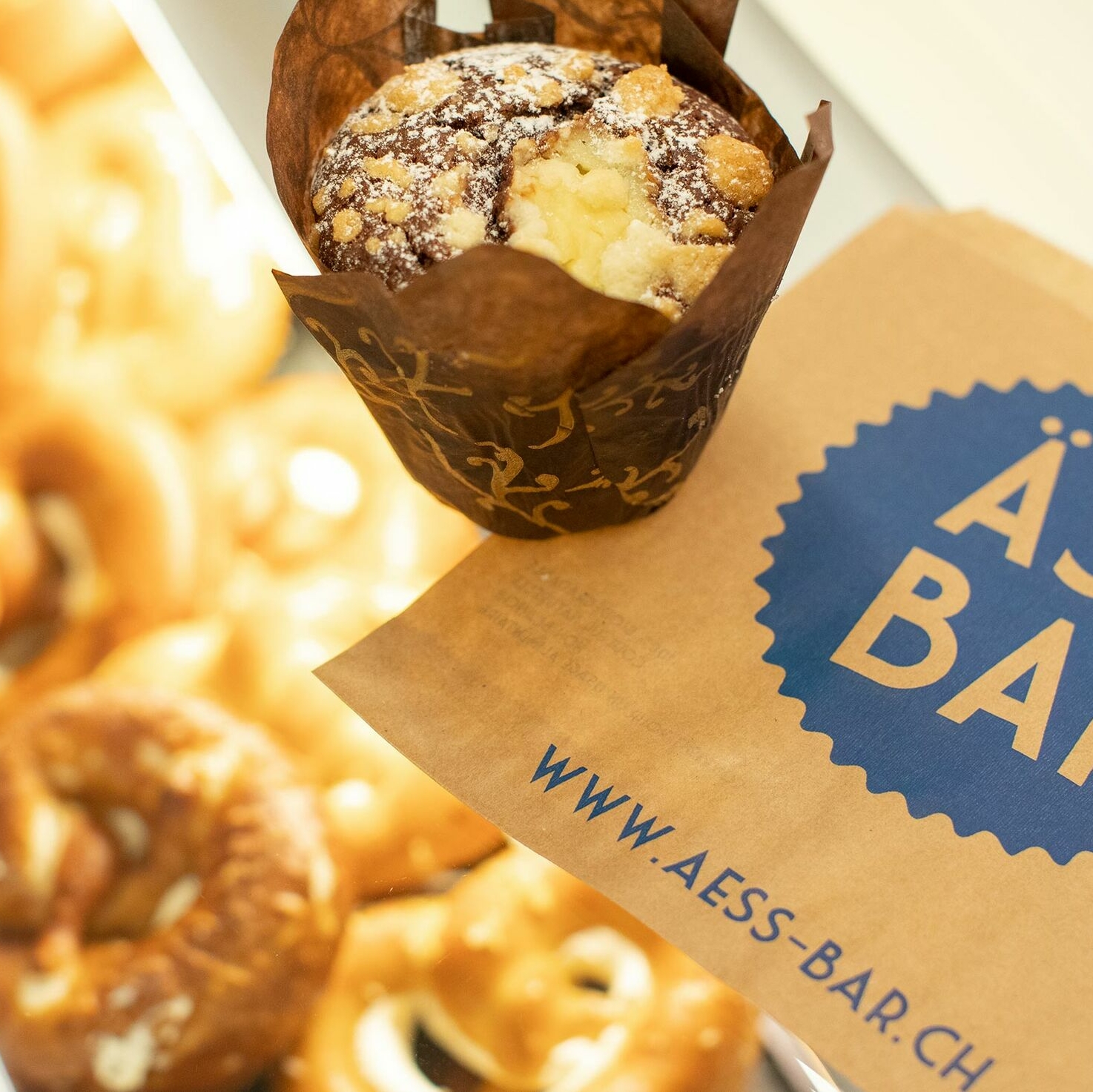 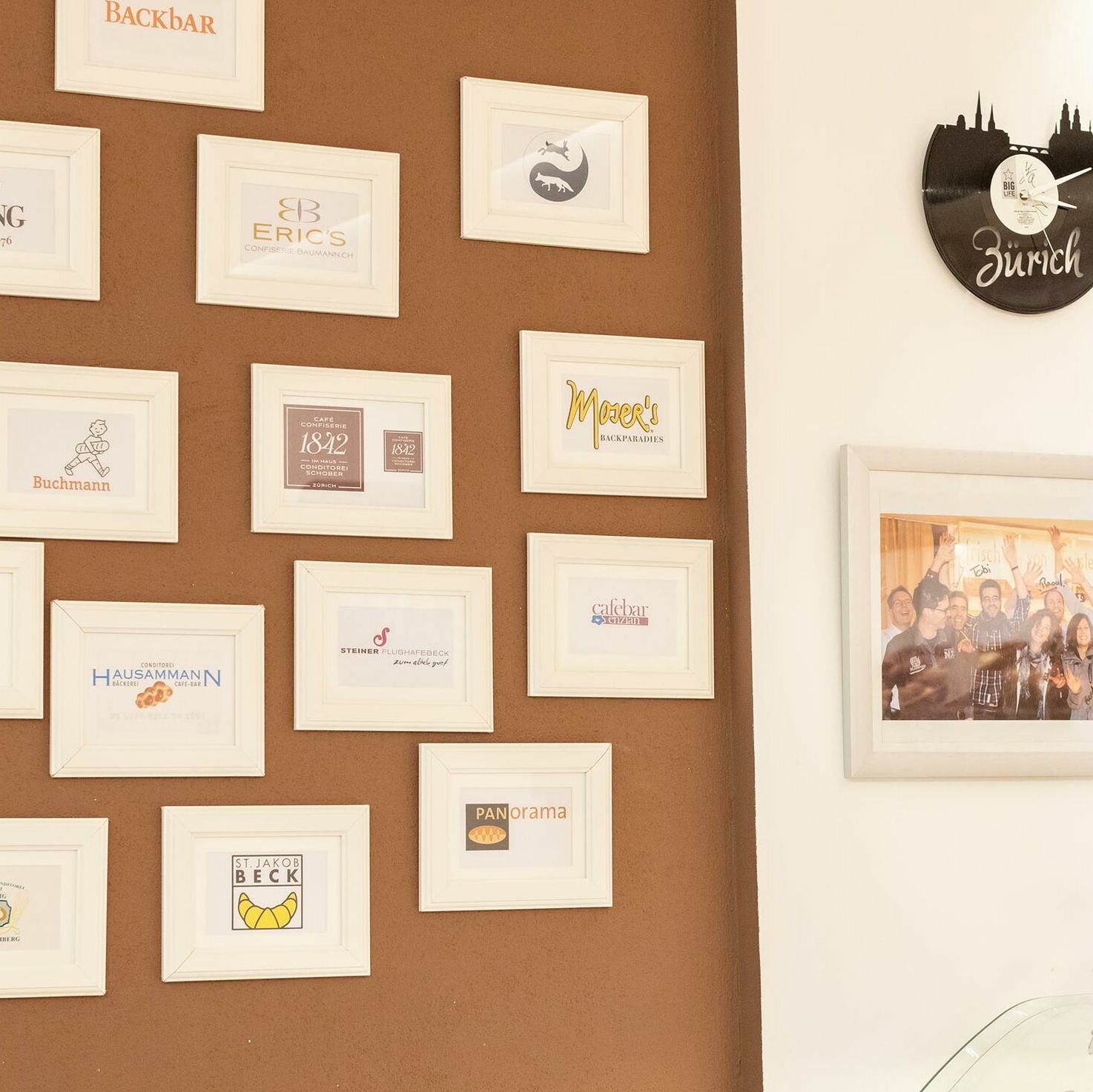 On the front line of the fight against waste – Sandro Furnari and his team at Äss-Bar sell off yesterday’s baked goods at bargain prices.

A croissant for 50 centimes? No problem! Äss-Bar now has eleven branches in Switzerland, but the original store opened in the heart of Niederdorf. It’s the place to buy baked goods that are left on the shelves when local bakeries and confectioners close for the day – at bargain prices. Even before sustainability became such a hot topic, Sandro Furnari and his team caught people’s imagination when they decided to try to reduce food waste.

240 grams of food per person are thrown away in Switzerland every day. That might not sound much, but it amounts to an incredible 778,000 tonnes a year: ‘It’s the result of our modern consumer society,’ says Äss-Bar’s co-founder Sandro Furnari. People are spoilt – they can consume whatever they want, whenever they want. This leads to oversupply and waste. Äss-Bar is tackling the problem of food waste with a concept that is as simple as it is ingenious. Bread and cakes that are left on the shelves of bakers and confectioners at the end of the day are normally thrown away. But now they can be collected free of charge and sold at Äss-Bar the following day, with the bakeries receiving a share of the profits.

Co-founder Raoul Stöckle was inspired to try out this business model after seeing similar projects in France and Germany. He shared the idea with his colleagues Sandro Furnari, Raimund Möhl and Philippe Martin, and they quickly realised that no one was doing it in Switzerland. They opened their first branch in Niederdorf in November 2013: ‘The location is perfect because there’s lots of passing trade,’ says Sandro.

‘Food waste is the result of our modern consumer society’

After that, everything went on like clockwork. The press took an interest, customers loved the idea, and more branches followed. ‘We were really bowled over by its success,’ says Sandro. The four founders had no experience in retail or the food industry but simply started the project alongside their normal jobs. This became more difficult when the company’s expansion took off. Today, Sandro is the only one who still works at Äss-Bar, but the other three co-founders are still partners: ‘We could never have imagined this six years ago,’ he says.

‘People don't rely on their senses and intuition enough’

Sandro now runs the company with a four-person team, which includes Marketing Manager Nadja Zehnbauer. There are a number of reasons for Äss-Bar’s success, she says: ‘Of course the main one is price, particularly for students. And then there are the people who think perfectly good food shouldn’t just be thrown away.’ There’s no doubt that the concept is good for the environment – Äss-Bar cuts food waste by 700 tonnes a year.

But why is so much food thrown away in the first place? Nadja is convinced it’s mainly down to lack of knowledge: ‘Nowadays people have no idea what to do with old bread or expired yogurt. They just look at the best-before date and throw the food away the next day rather than relying on their senses and intuition.’ Sandro adds that people often don’t manage their food properly, often buying too much, shopping too infrequently, failing to plan how to use their leftovers or storing food incorrectly.

So what happens to the leftovers at Äss-Bar? ‘Our staff can take home whatever they want when the shop closes,’ says Sandro. Äss-Bar also works closely with charities, such as Sozialwerk Pfarrer Sieber in Zurich. Some of the leftovers are recycled by ZüriChips and the brewery Oerlikon, then anything that’s left is turned into biogas.