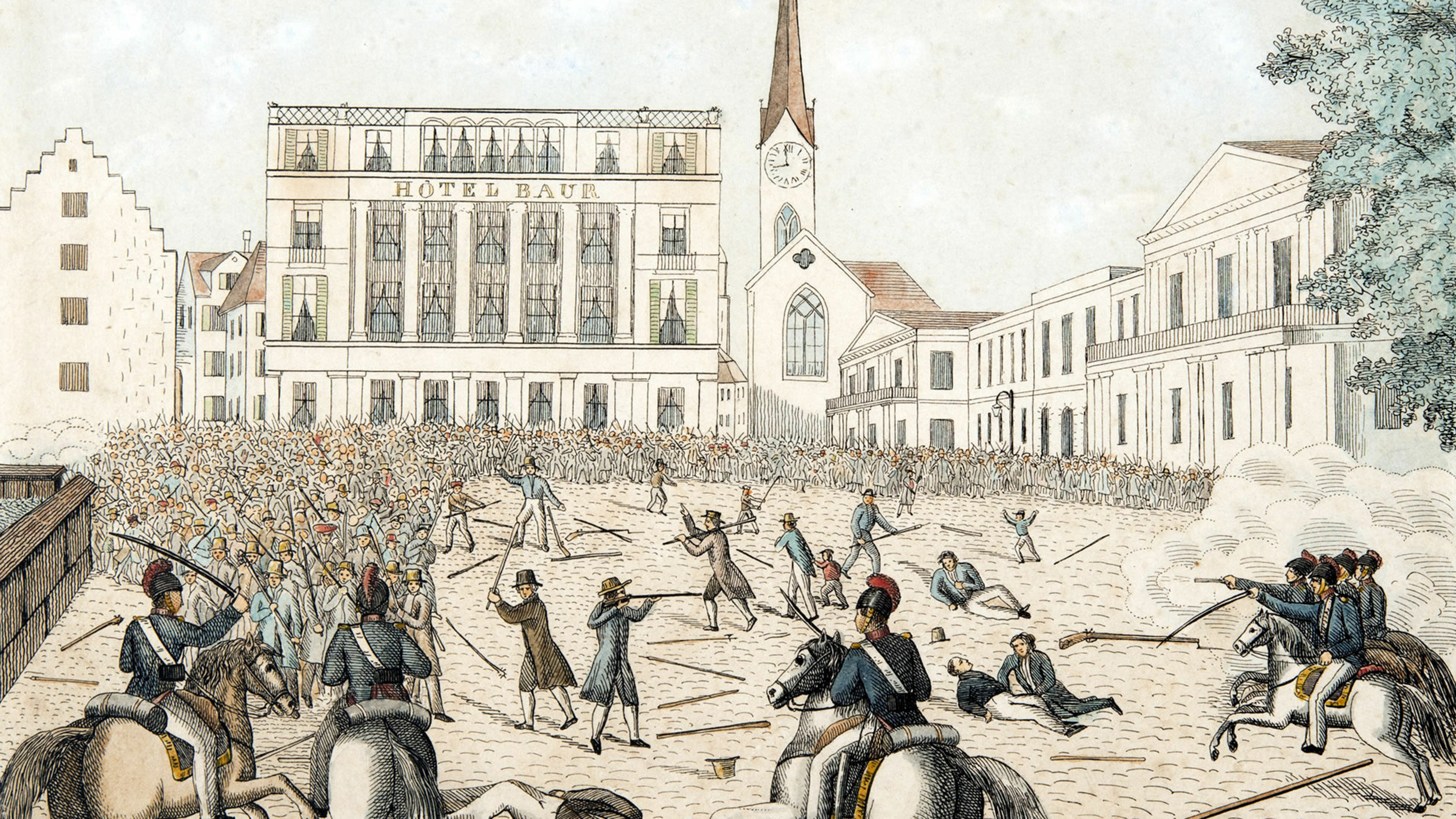 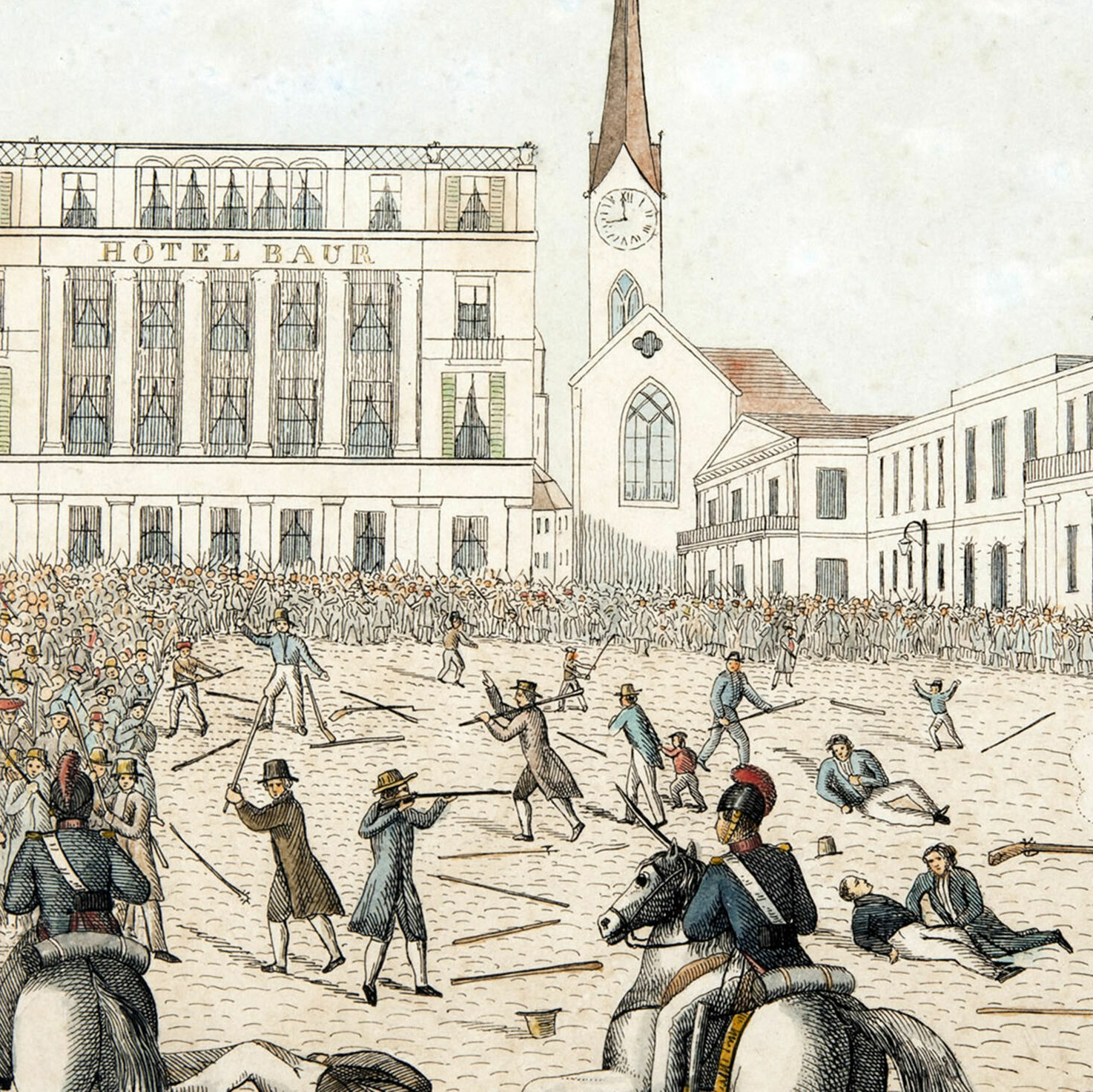 On 6 September 1839, thousands of farmers from the Zurich Oberland, armed with morning stars, halberds, pitchforks and cudgels, advanced on the cantonal capital city to topple the government. It was one of the bloody climaxes of the conflict between liberals and conservatives in the wild 1840s.

In 1831, buoyed by the July Revolution in France, liberals overthrew the old elite and introduced a liberal constitution in the canton of Zurich, as in several other cantons. Popular sovereignty, education, personal achievement and competition were the maxims of the liberal movement. In the canton of Zurich, the liberals together with the radicals held a majority in the cantonal council from 1832. True to the liberal spirit, customs barriers were abolished, roads were built and in an education offensive the Church was banished from the classrooms and school books. All this was done with scant regard for the sensitivities of the rural conservative farming population. While entrepreneurs, lawyers and teachers benefited from the new regime, small farmers, homeworkers and representatives of the old elite saw themselves as losers. This heated atmosphere provided the backdrop to the clash in the city of Zurich in 1839.

Small farmers, homeworkers and representatives of the old elite saw themselves as losers.

The decision by the Zurich Education Council to elect the Enlightenment theologian David Friedrich Strauss (1808–1874) as Professor of the Faculty of Theology at the University of Zurich was the final straw. Strauss was to lead Zurich into a new Reformation, in the sense of a Christianity that was free, rational and guided by reason. A few years earlier, the theologian had published his sensational work “The Life of Jesus, Critically Examined”, which deconstructed the Gospels as mythical stories. An opposition to Strauss’ appointment formed immediately. Strauss represented a unifying image of the enemy for the conservatives. The Strauss Affair began. In light of the impending uprising, the liberals hurriedly withdrew the appointment and permanently retired Strauss even before he took up the position.

The two caricatures of 1839 in the Swiss National Museum’s collection address the Strauss Affair from opposing positions. Both depict Strauss as an ostrich as “Strauss” is also the German word for “ostrich”.

While the Devil rides with the ostrich straight to Hell, on the right the conservatives wage war against the liberal government. (Image: Swiss National Museum)

The response by the liberal government came too late. Due to the Strauss Affair, the opposition had organised itself and was already working towards a political coup. When rumours began circulating in the countryside that the government wanted to ask friendly liberal cantons for military assistance, a protest march gathered in Pfäffikon (Zurich) on 5 September 1839, which was soon joined by residents of other communes. The number had grown to around 1500 to 2000 people by the time that the procession entered Zurich at 7am on the following morning.

The number had grown to around 1500 to 2000 people by the time that the procession entered Zurich.

Eyewitness Otto Werdmüller, then a 21-year-old medical student, was in Zurich on that day and watched the events unfold: “‘They’re coming, they’re coming’ was the shout heard from every corner, and I rushed to the quay at the double […]. And it was true: They were coming in their droves, organised into ranks of 6 men each, marching down Marktgasse. Only around 200 were armed with shotguns and wearing respectable attire; the rest, around 8000[sic!], shabby, sloppy people of all ages, carried morning stars and halberds, but also pitchforks, scythes, flails, huge cudgels and other tools suitable for murderous deeds. They sang at the top of their voices: This is the day that God has made. And then they proceeded at a gentle jog under the leadership of Father Hirzel across the lower bridge onto Münsterhof square to unite with the first division for the assault on the post office building where the government was seated.”

The leader of the pack was Bernhard Hirzel (1807–1847), a pastor in Pfäffikon (Zurich). The country people advanced on the city singing hymns and came face to face with the military on Münsterplatz. The government had barricaded itself inside the post office. Suddenly shots were fired and the situation escalated. Fourteen rebels lay dead. The 15th victim was Cantonal Councillor Johannes Hegetschweiler (1789–1839), who had tried to pass on the command to cease fire. Once again, eyewitness Otto Werdmüller: “I’d like to add that during the fighting the government dissolved itself and its members leapt out through the windows in a cowardly fashion and, alongside many other radicals, fled to Baden.” With the de facto dissolution of the government, chaos reigned in Zurich. In this situation, city president Karl Eduard Ziegler (1800–1882) took charge. He managed to calm the protesters and to set up a provisional state council. Politics in the canton of Zurich was again organised along more peaceful – and temporarily more traditional – lines. The conservative turnaround was not sustainable. At federal level, the conflict between conservatives and liberals led to the Sonderbund War and finally to the creation of the Confederation.

The Züriputsch still has an impact on our everyday life. With this event, the word “putsch”, which was originally a Swiss German word for “knock” or “thrust”, entered the wider German vernacular, and these days is generally used by both German speakers and English speakers to mean an attempt by a small group of people to overthrow a state authority.