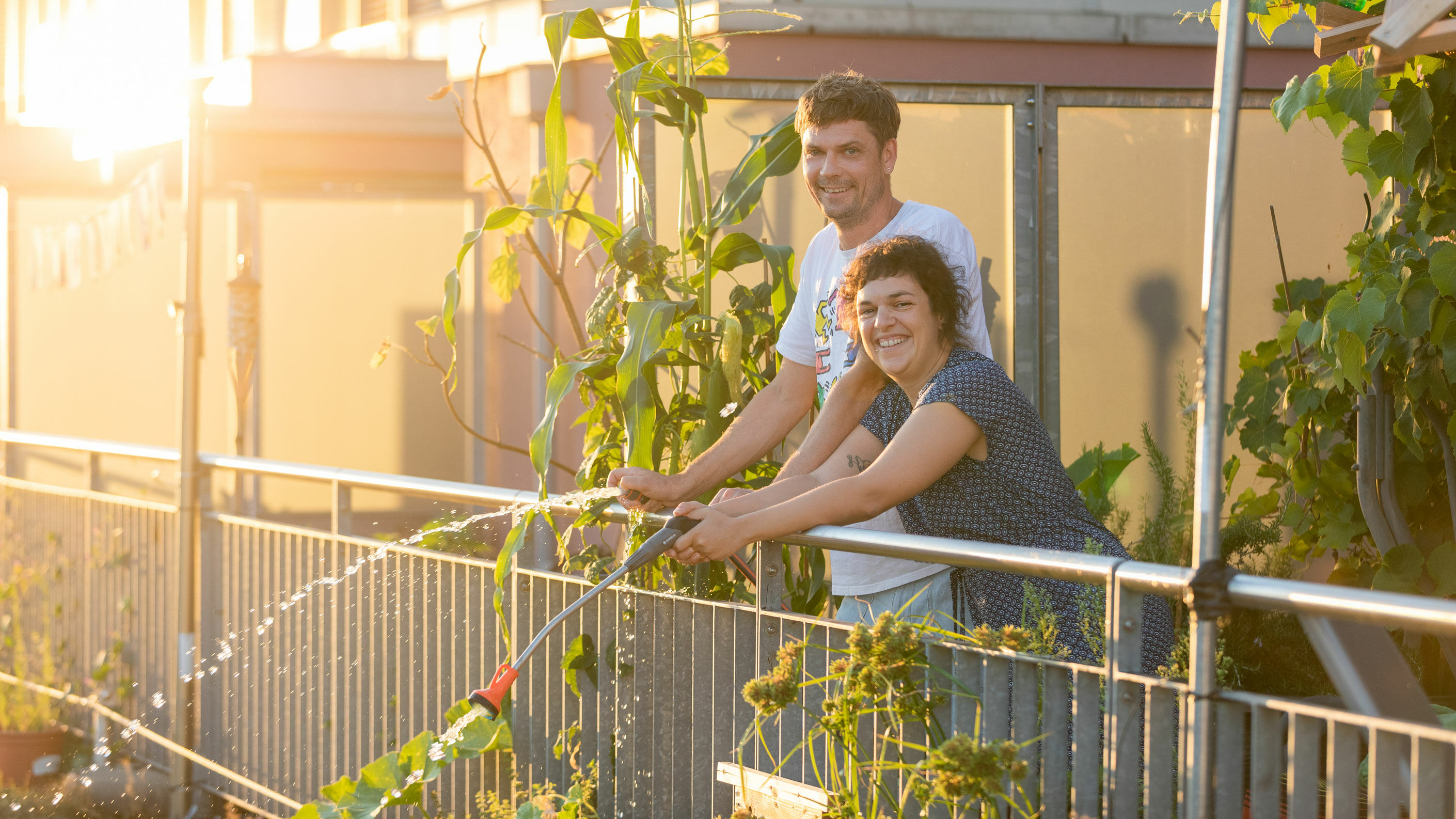 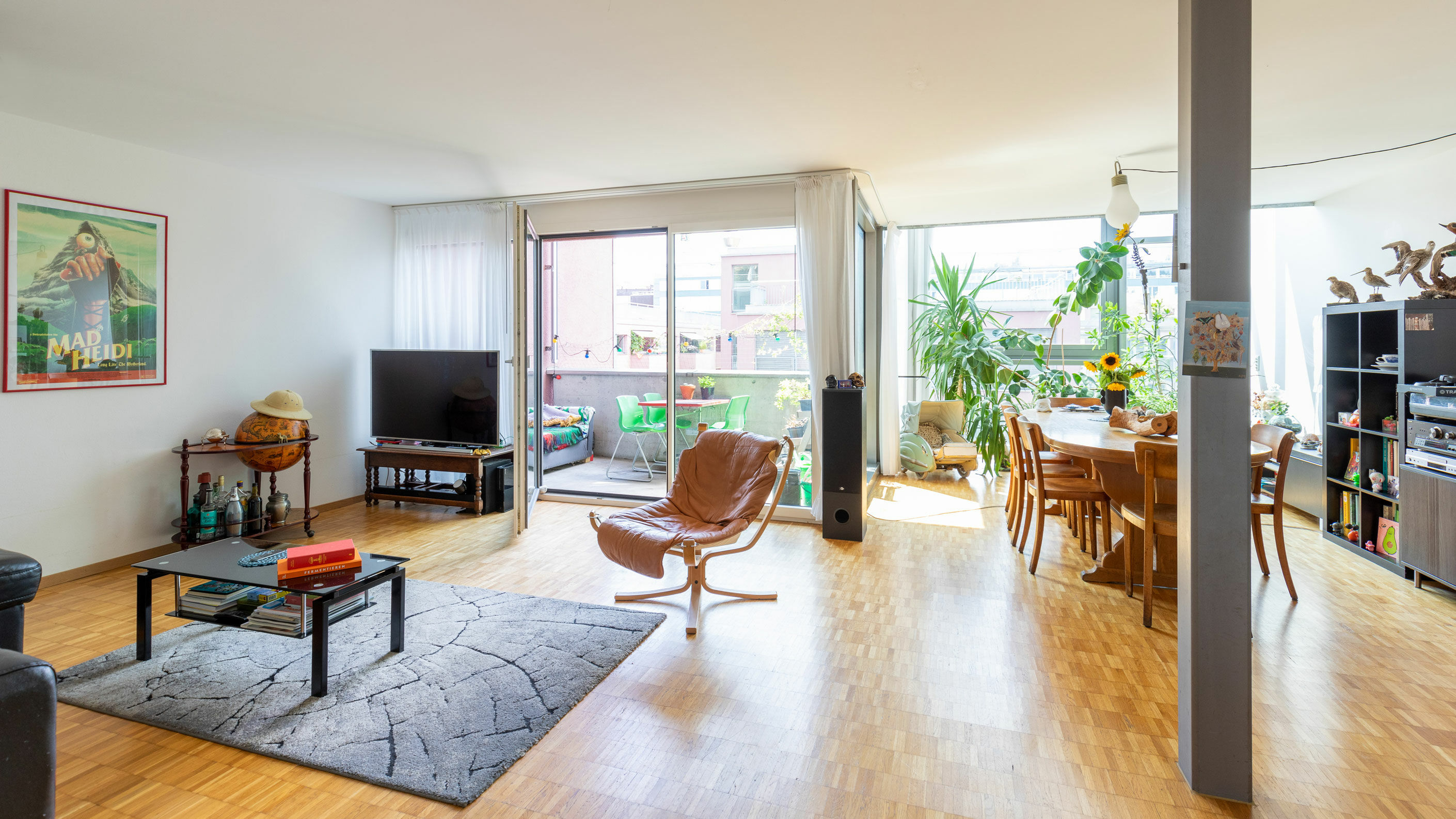 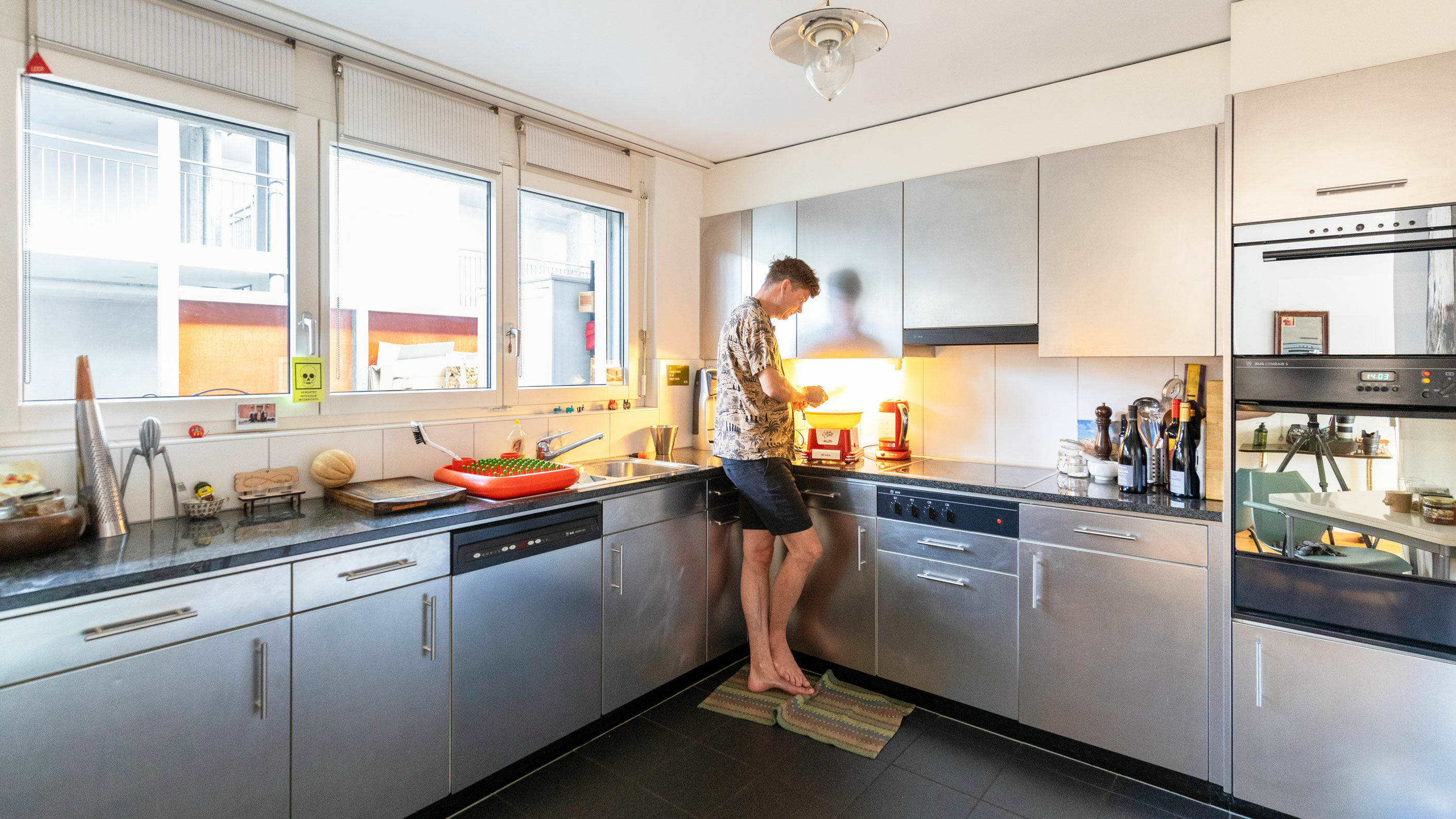 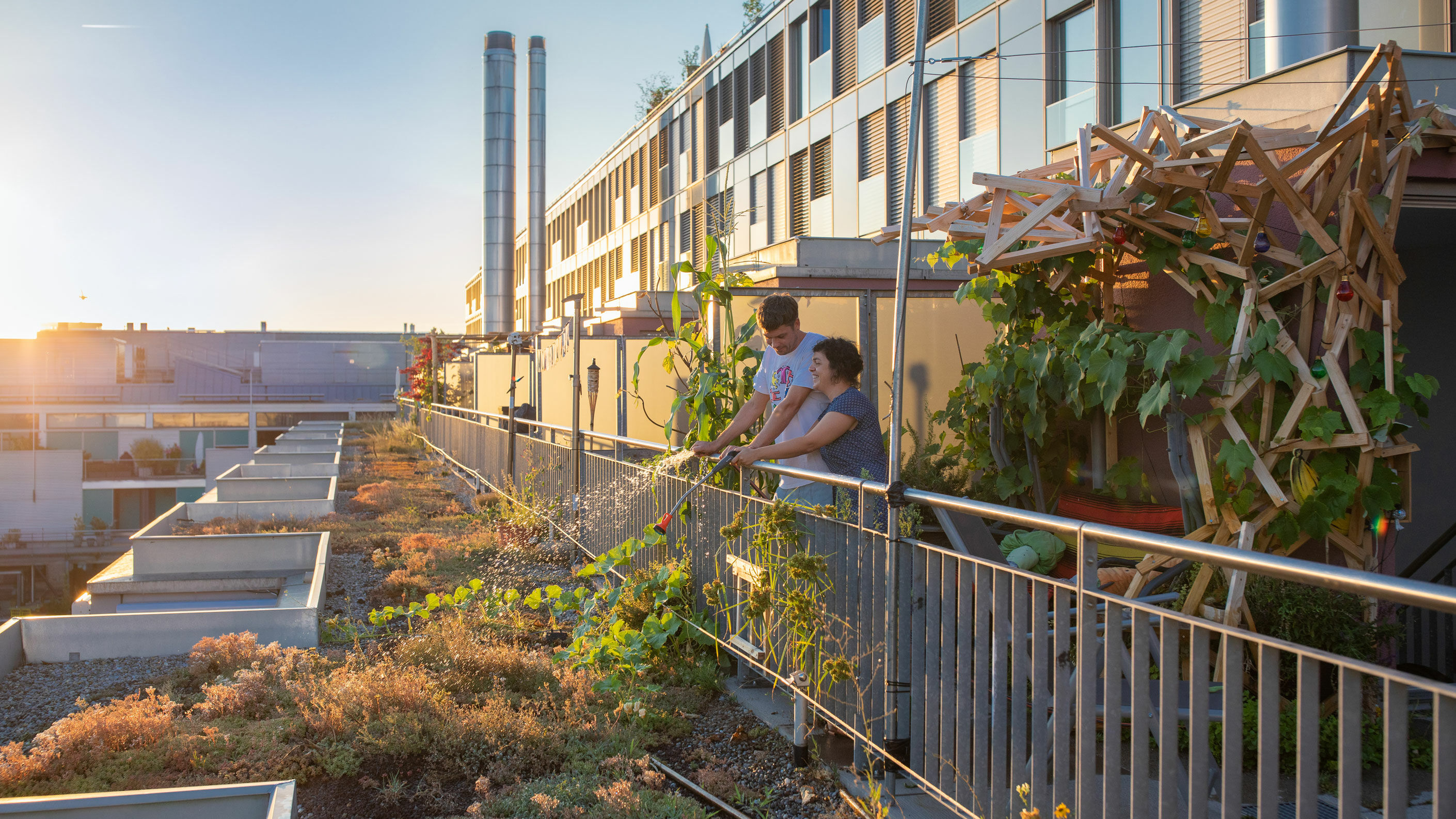 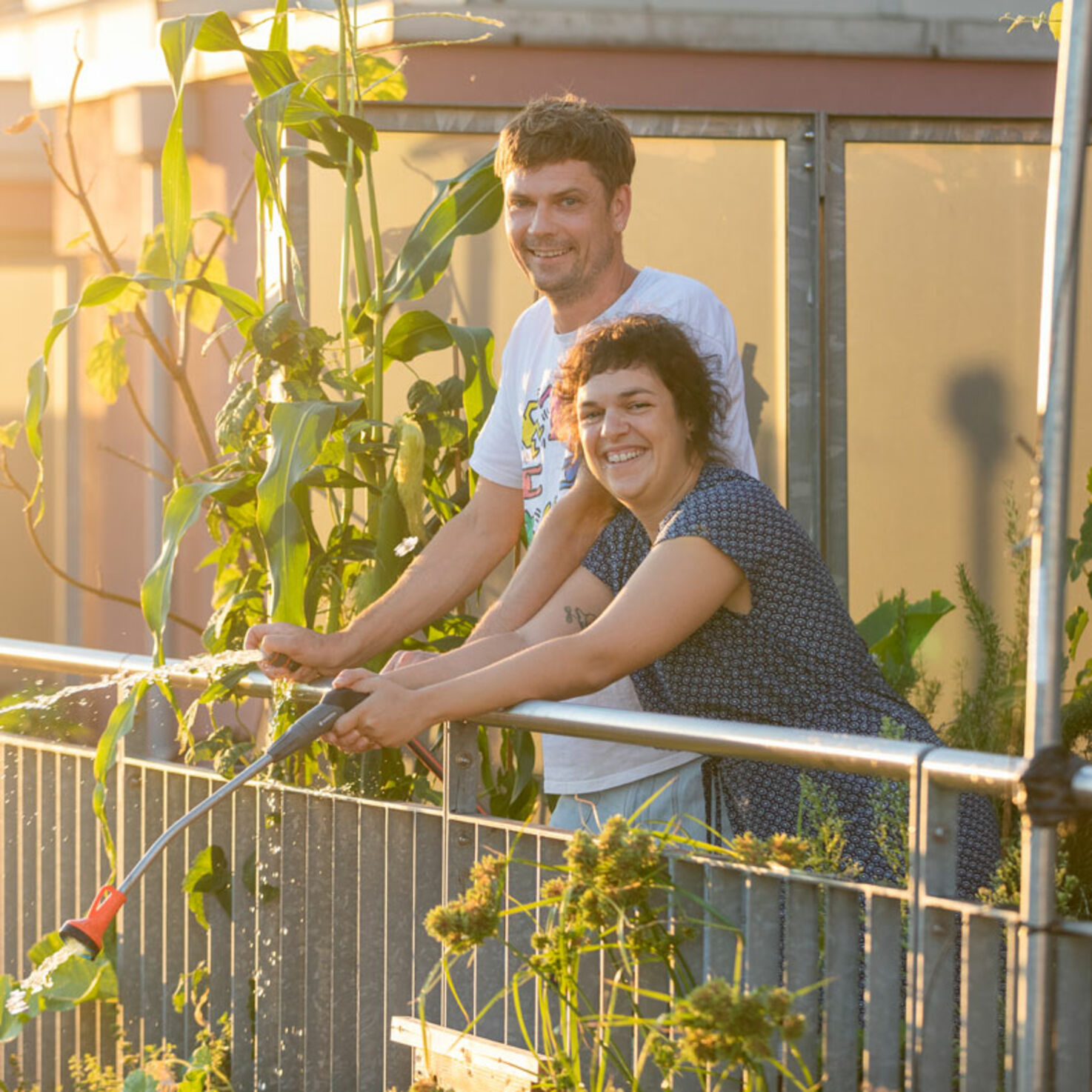 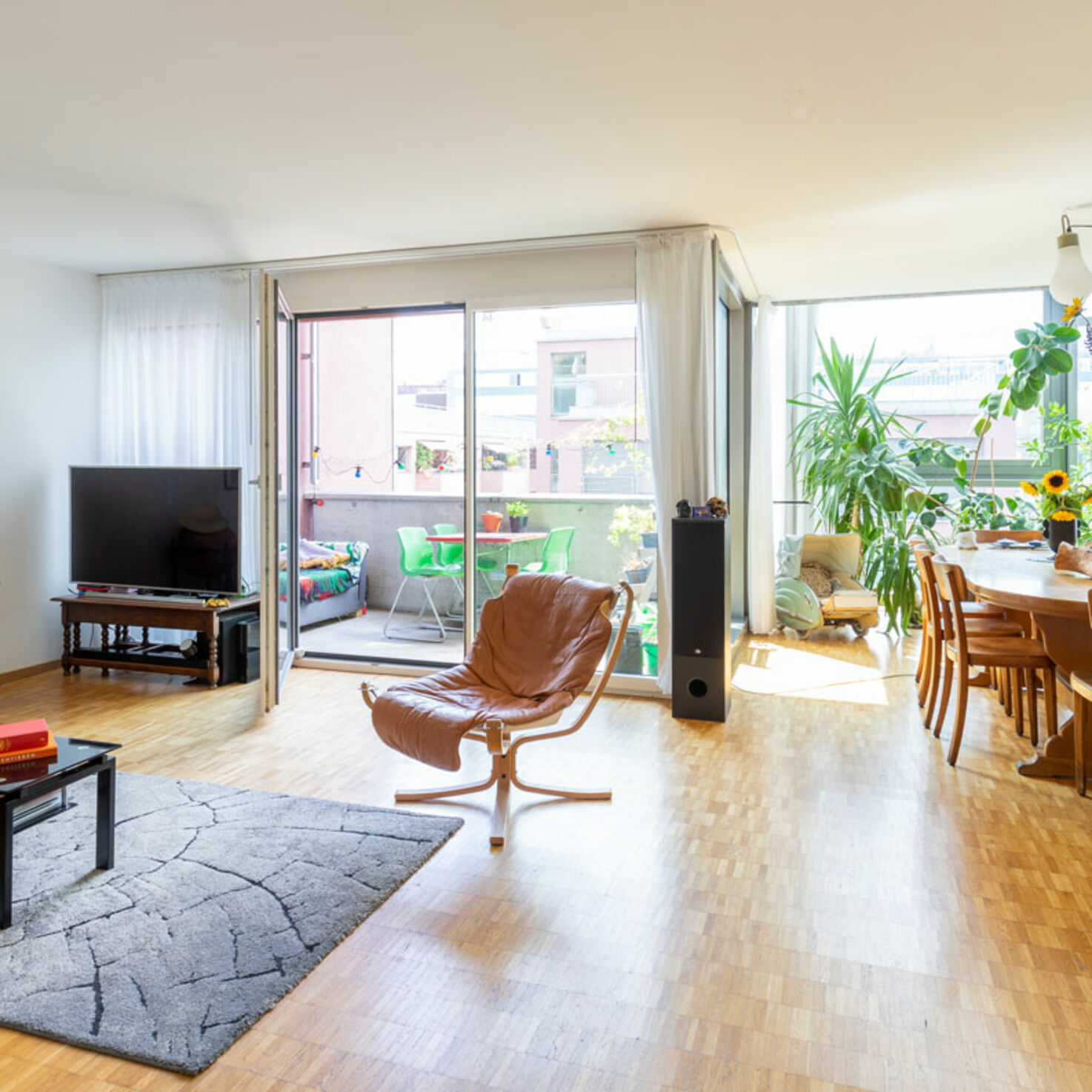 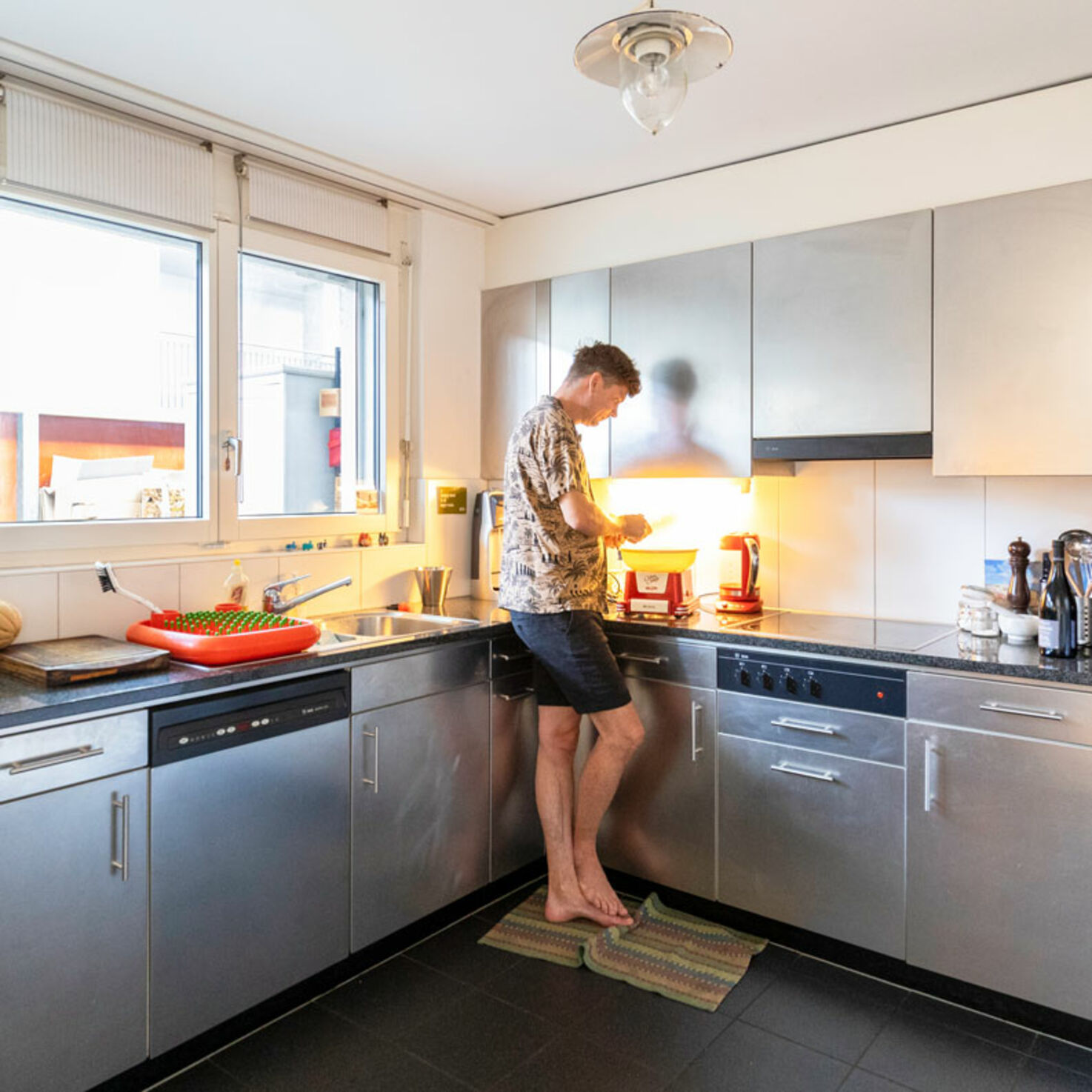 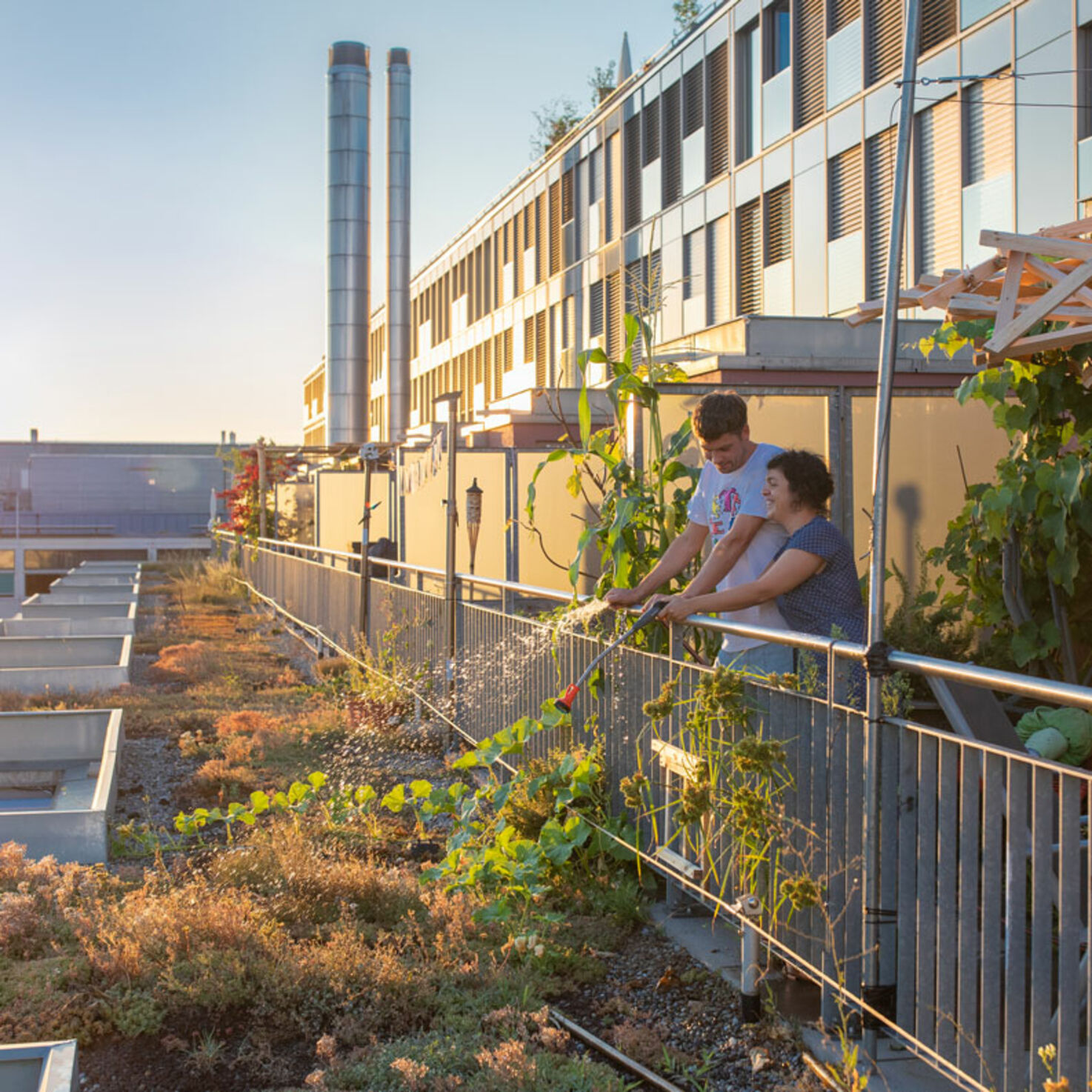 For years, Claudia Bernardini and Andi Handke maintained a long-distance relationship, commuting backwards and forwards between Zurich, Genoa and Bergamo. Then Claudia decided to move to Zurich’s District 5. Today, the pair live among stuffed animals, vintage furniture and a fishpond – plus huge quantities of fruit and vegetables on their own roof terrace.

Claudia Bernardini and Andi Handke have made their home in Zurich’s District 5 – on Heinrichstrasse, to be precise. The couple have been living on the third floor here – along with their two cats – since 2013. Dozens of flowers, pots and vases catch your eye as you enter the bright lounge. Stuffed animals stand on top of the cupboards, a set of antlers hangs on the wall, bubbles rise to the surface in fish tanks and a cat climbs up the stairs.

‘We simply take things that we both like and put them in the flat,’

‘As you will soon notice, we do not follow an actual plan in how we furnish this place. We simply take things that we both like and put them in the flat,’ explains Andi, who works full-time as a chef and runs the Bistro Babette near Idaplatz in Wiedikon. ‘Fortunately, though, we are usually in agreement on what we do and do not like to have lying around at home,’ adds Claudia, who works as a senior physician at the Centre for Addiction Medicine in Zurich.

‘I got the lounge table from my mother. Like me, she ran an inn-type restaurant, and this was the old regulars’ table,’

Although there is no actual plan behind how things are arranged, most of the items do have a story behind them, Andi explains. For example, the pictures on the walls come from Claudia’s uncle, who was one of the pioneers of visual poetry in Milan. ‘I got the lounge table from my mother. Like me, she ran an inn-type restaurant, and this was the old regulars’ table,’ as Andi puts it. The chairs, meanwhile, come from his old restaurant, while the stuffed animals were rescued by Andi from a former vocational college opposite, where he taught trainee chefs. ‘Otherwise, they would all have ended up with the rubbish, which we thought would have been a shame,’ Claudia says. ‘And the chained doll comes from a girlfriend who worked at an erotic festival.’ 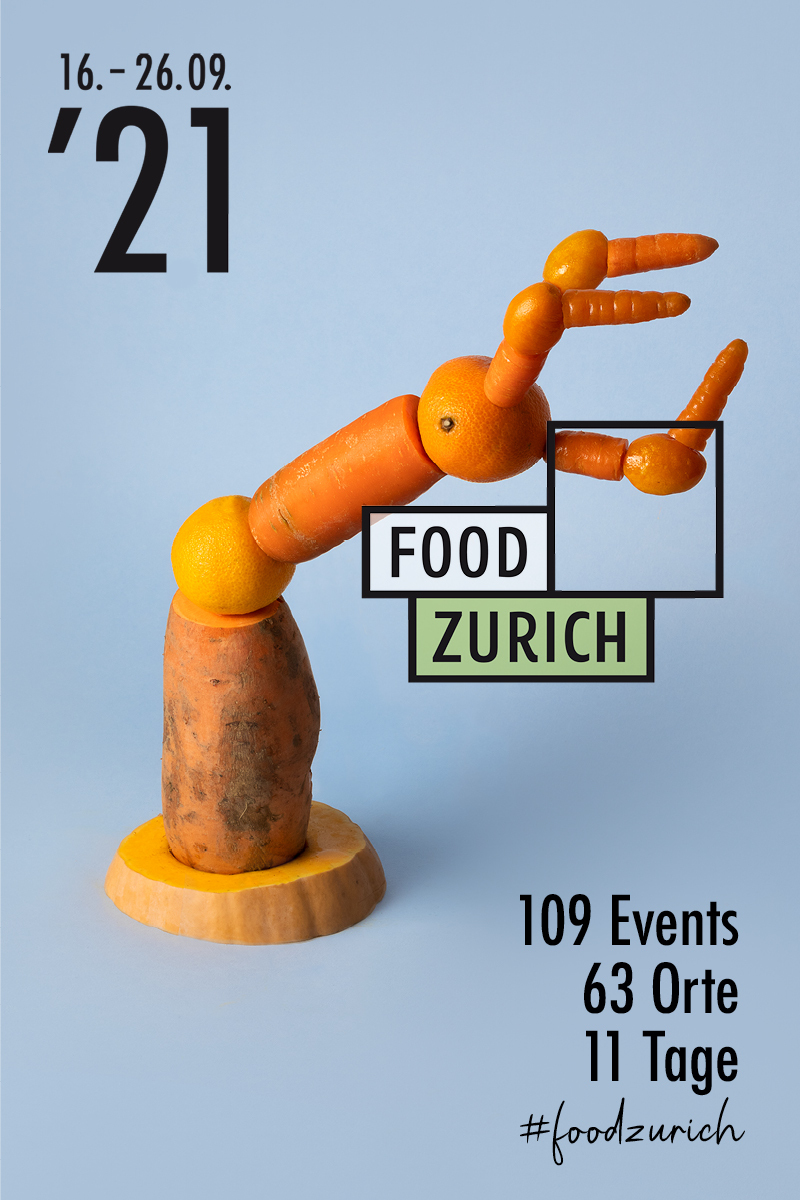 For years, Andi lived in the same building, just a few floors lower. ‘One day I saw a sticker in the lift saying that this flat was becoming vacant. I was determined to move here, so we applied for it, and luckily we got the flat,’ he says.

In 2013, they were formally offered the property

At this same time, Claudia – who was then his girlfriend – moved from Italy to Zurich. ‘After graduating in medicine in Genoa and working for a few years in Bergamo, I decided to move in with Andi and look for a job in Zurich,’ Claudia says. Prior to this, the pair spent years maintaining a long-distance relationship, one of them commuting to Zurich and the other to Genoa or Bergamo. Finally, in 2013, they were formally offered the property and dragged all their belongings up to their new home from the flat a few floors lower. ‘It was a relatively simple move,’ Andi says.

‘We have all sorts of things growing on the sunny terrace.’

Here, their domain now extends across three storeys and – alongside a large kitchen, a small balcony, a lounge and two bedrooms – has one very special highlight to offer: a green oasis on the roof terrace. ‘We have all sorts of things growing on the sunny terrace, from cucumbers and tomatoes to rocket, sunflowers and raspberries – and, most recently, even grapes from our own small vines,’ Andi explains. ‘It is wonderful for a chef, of course, to be able to grow a lot of their own things – and right in the city centre, too.’

It is not just the two of them who find the terrace worth its weight in gold. ‘It is also paradise for our cats, as they can run around and play here all day long,’ Claudia says as the warm evening sunlight falls on the terrace. In the background are a vegetable plot, vases and an old bathtub, which was quickly repurposed into a fishpond. ‘We like things to be cosy and, above all, peaceful. This flat is perfect for that,’ Claudia says with a grin.

Although she now feels at ease here and in Zurich generally, life in this city on the Limmat was not easy at first for the Genoa-born Claudia. ‘It took me years to find my feet in Zurich. Making friends was incredibly hard at first,’ she says, and she has now obtained her second specialist qualification. ‘When I came home after long days at work, Andi was usually out working at the Babette. Even the most wonderful flat is not much good if you are often on your own. Things were difficult at first, but now I am happy and so are we both.’