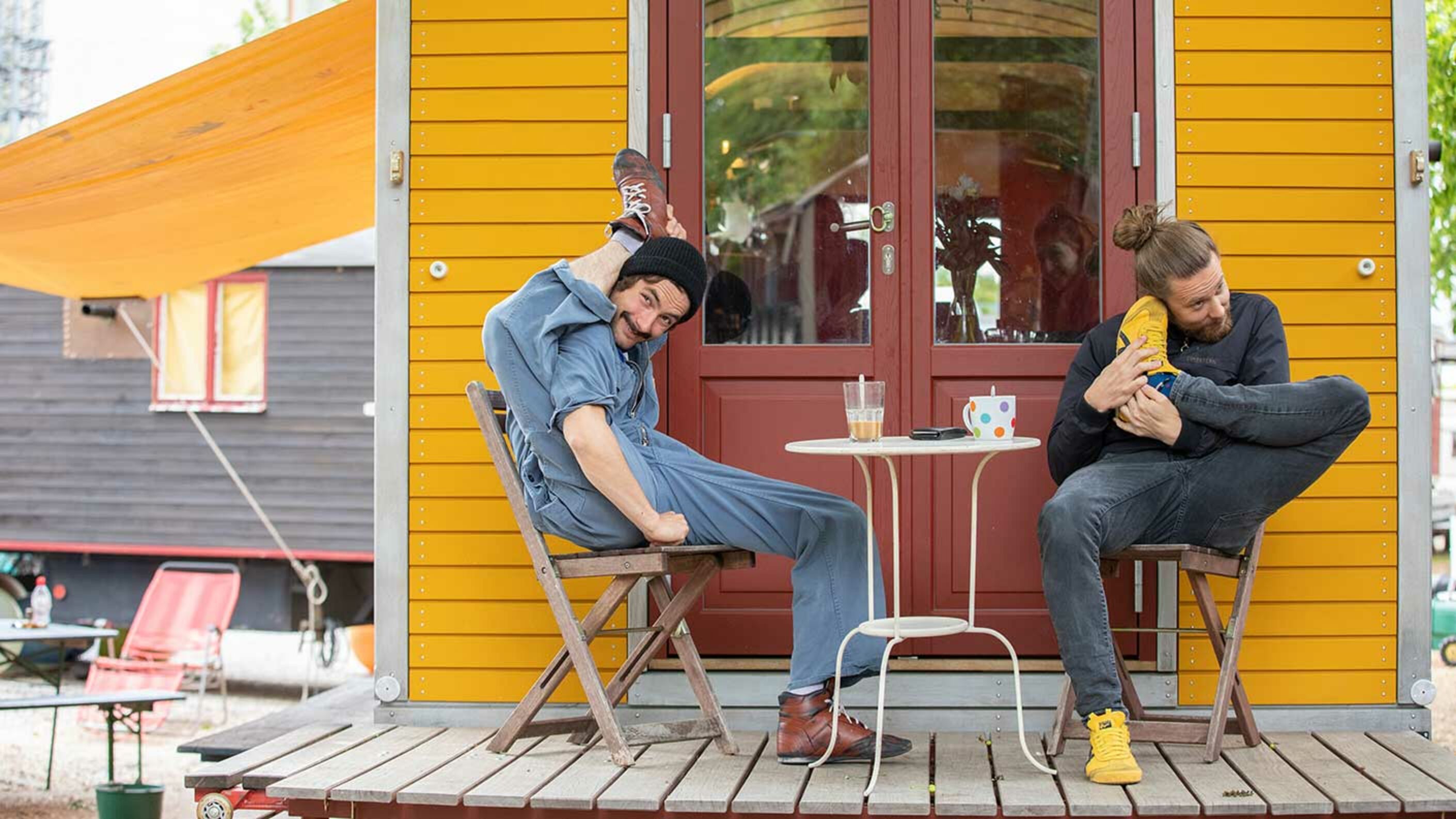 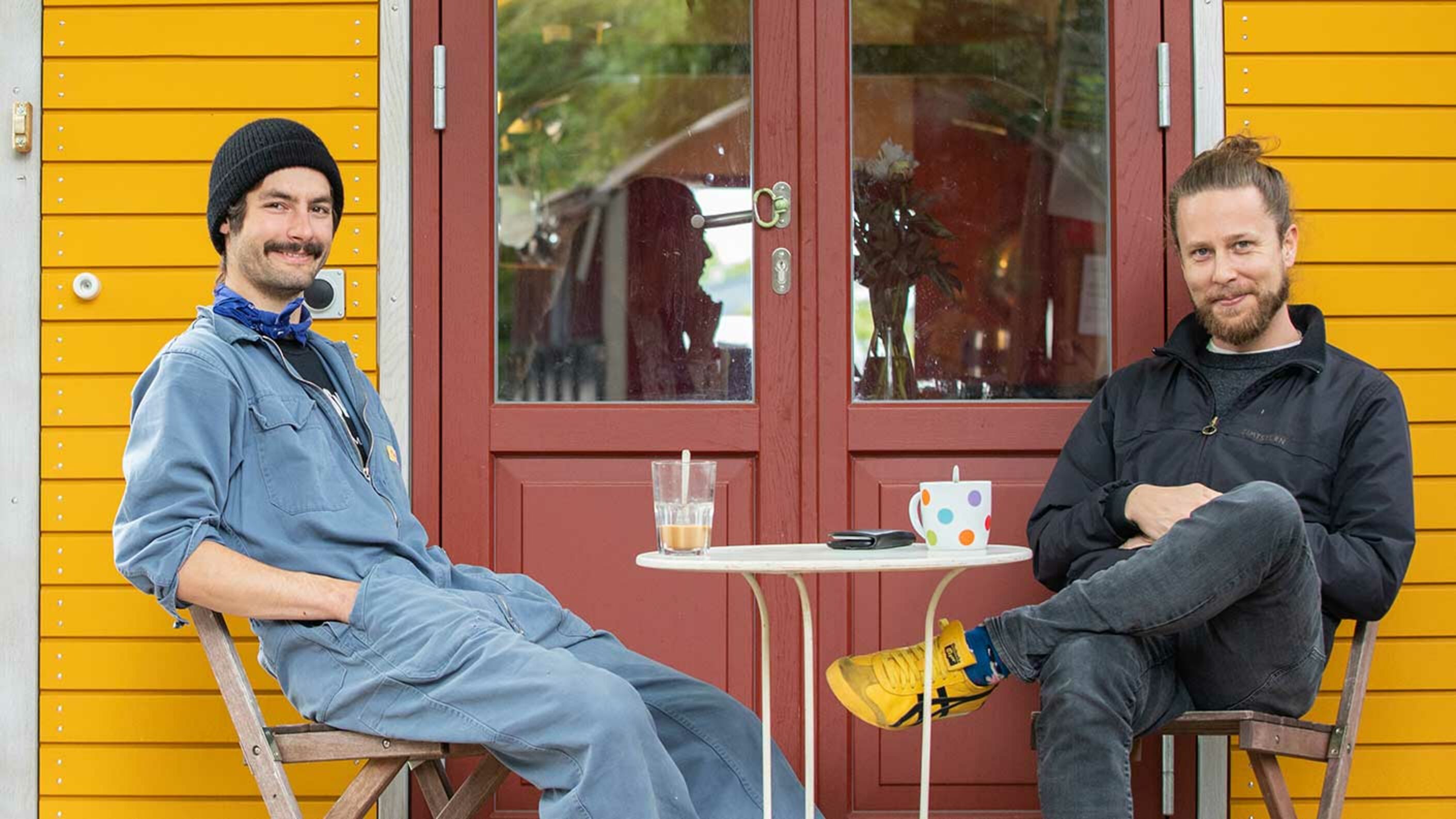 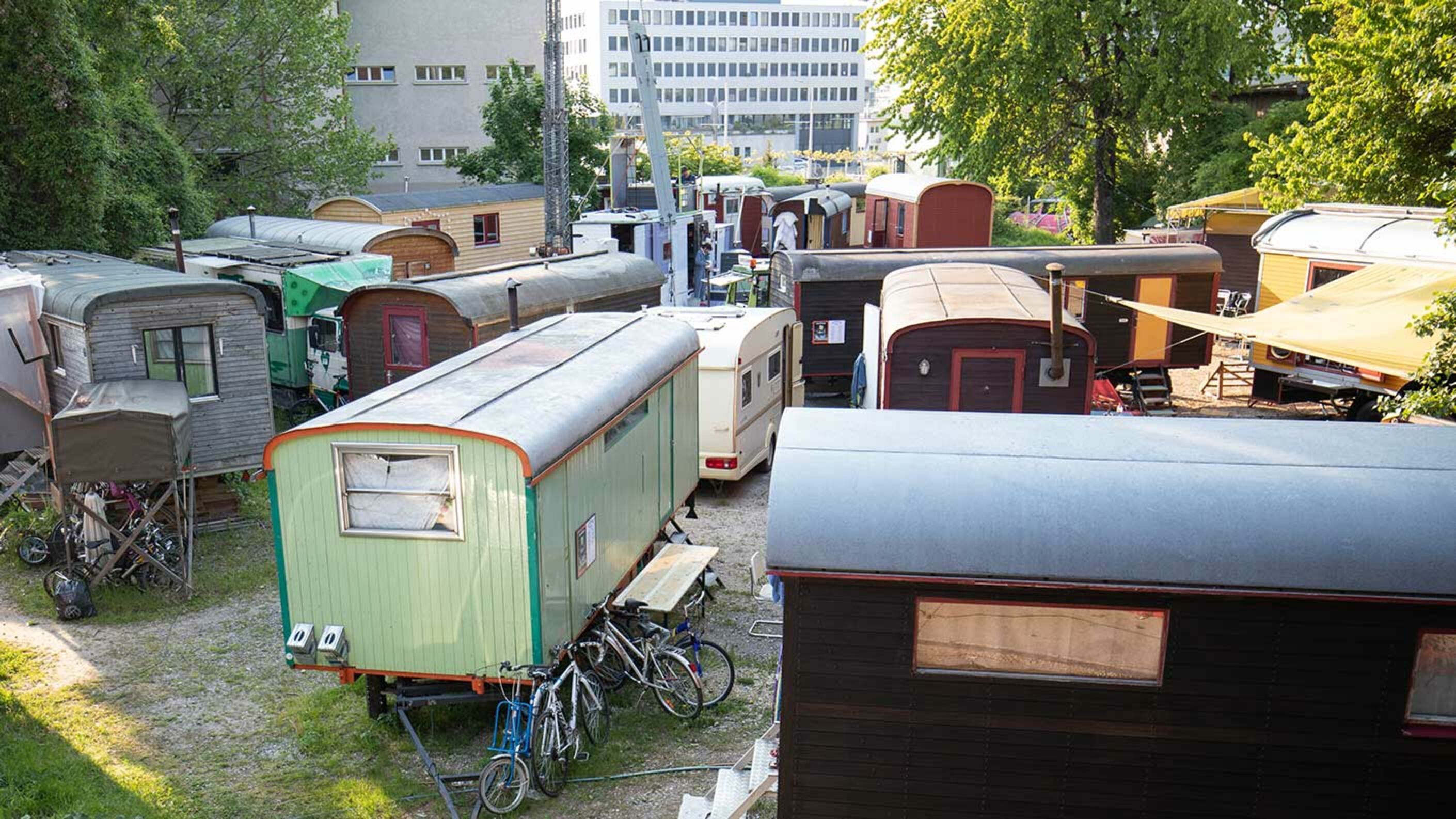 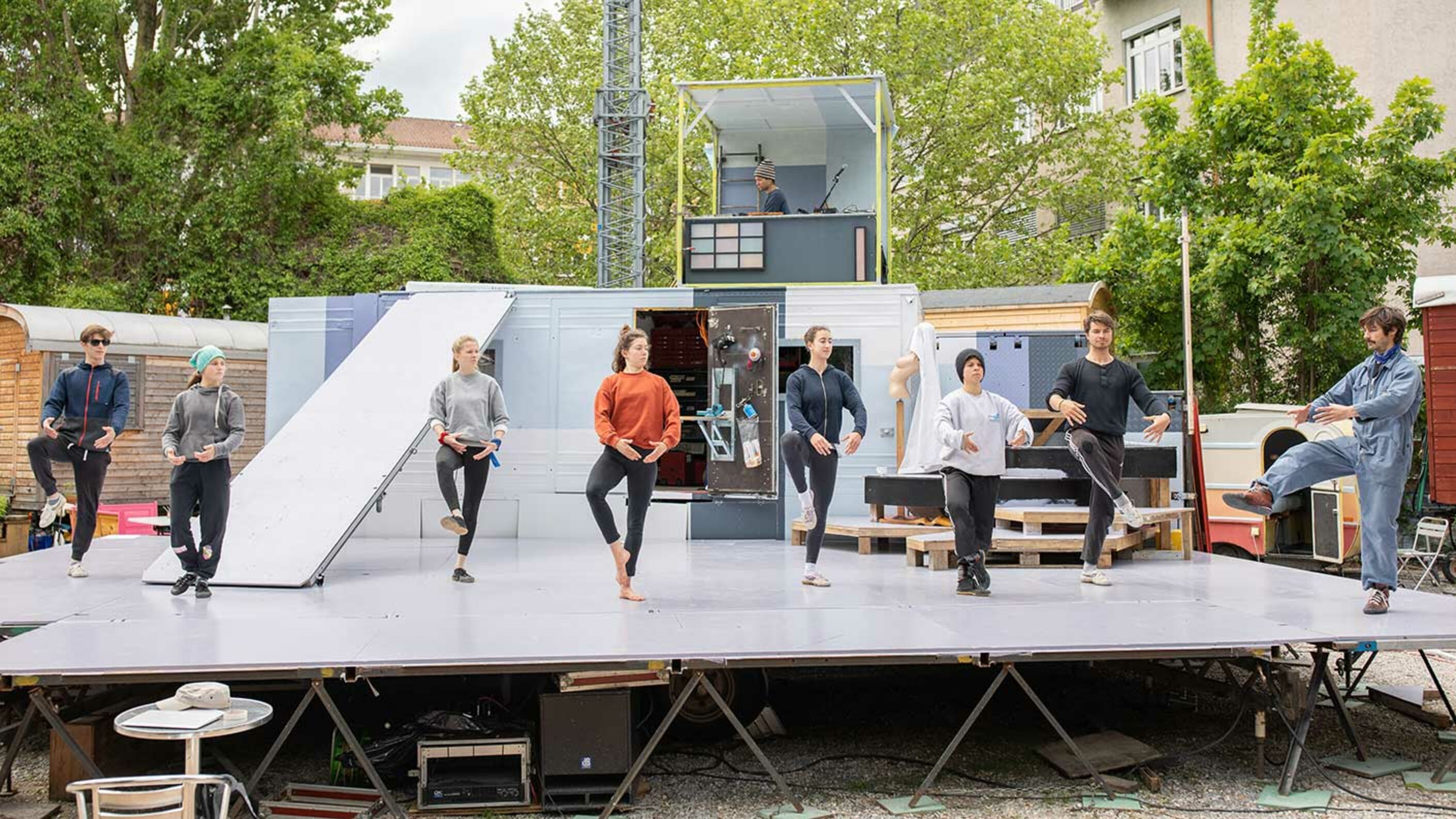 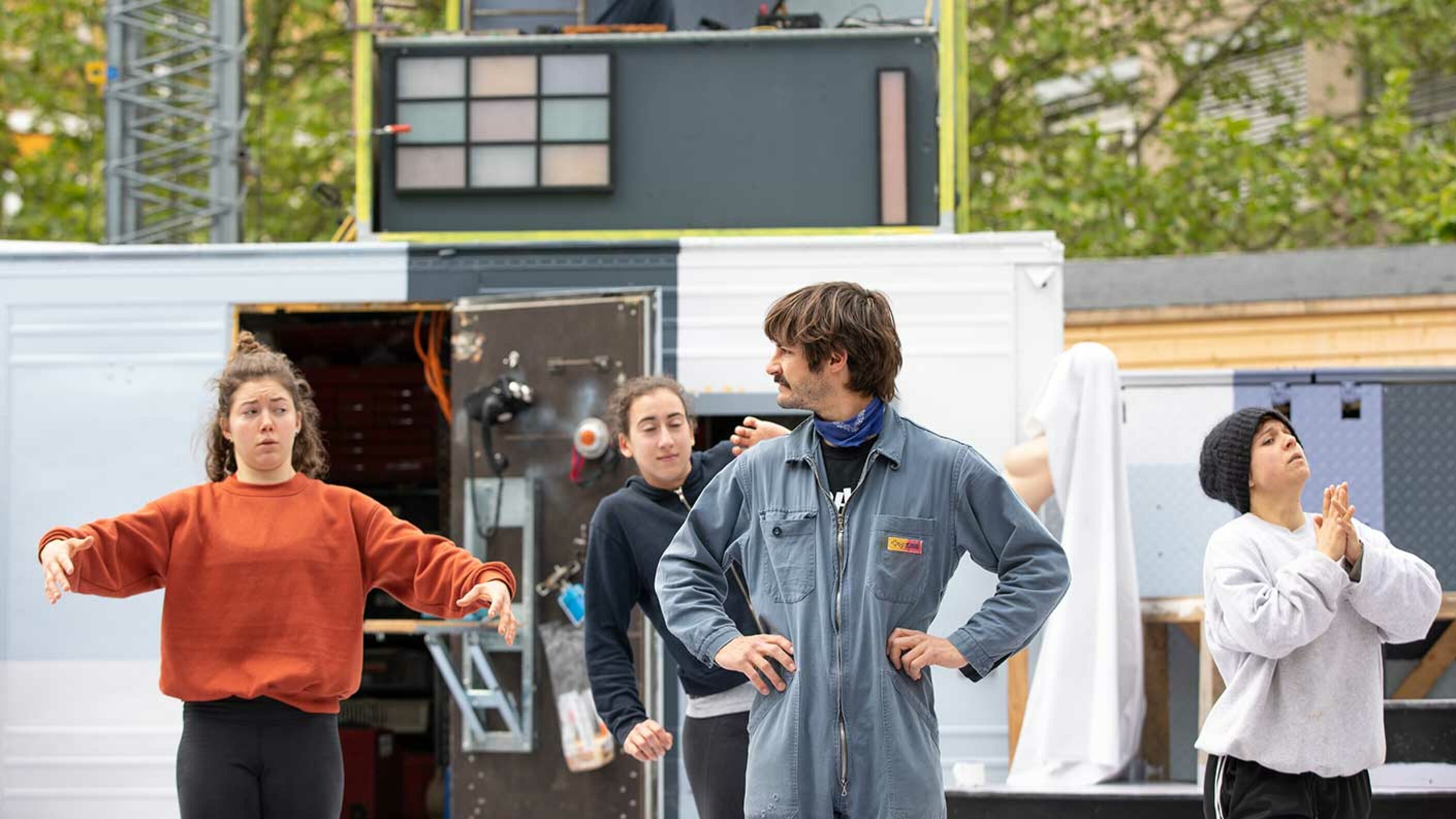 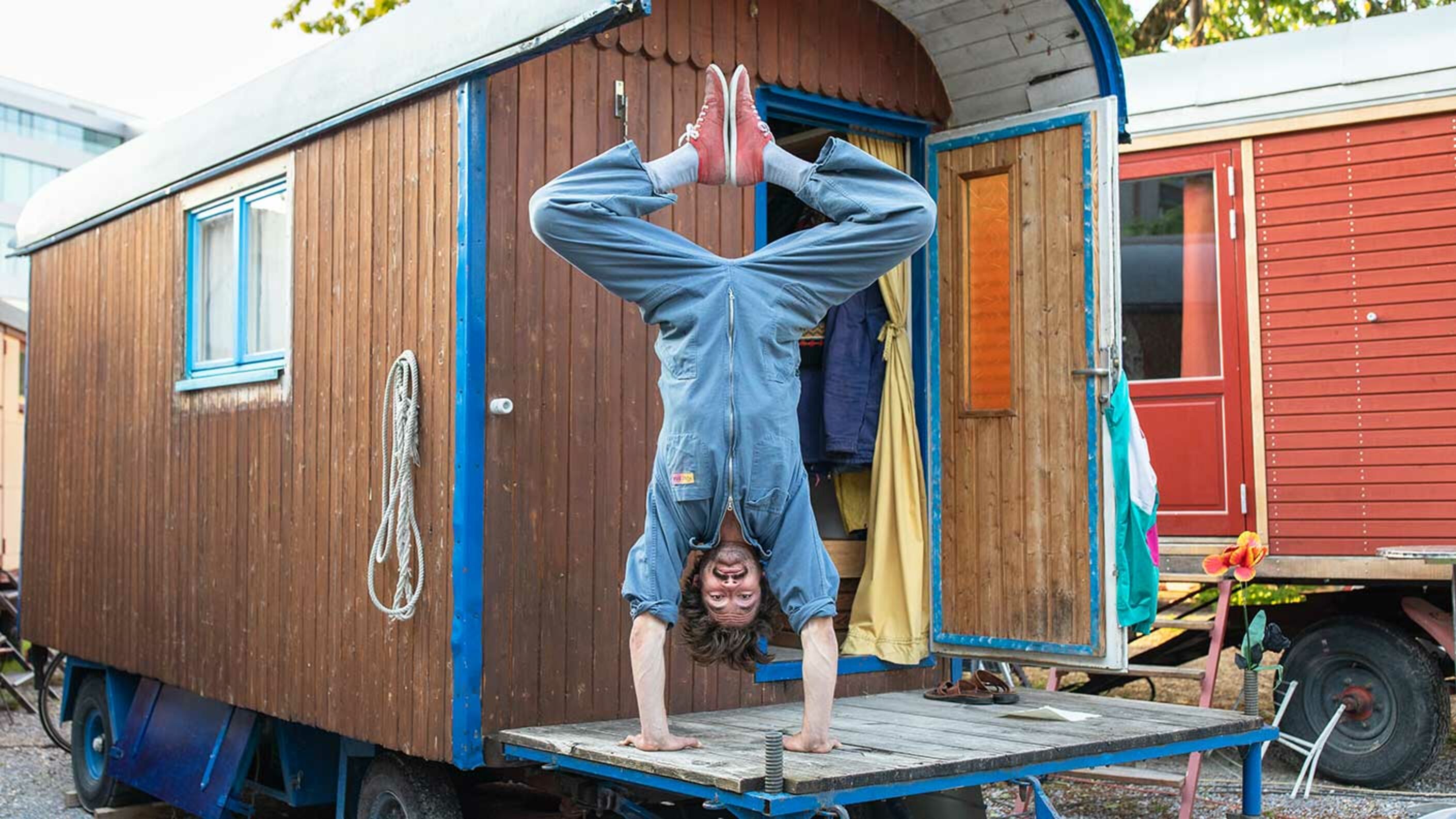 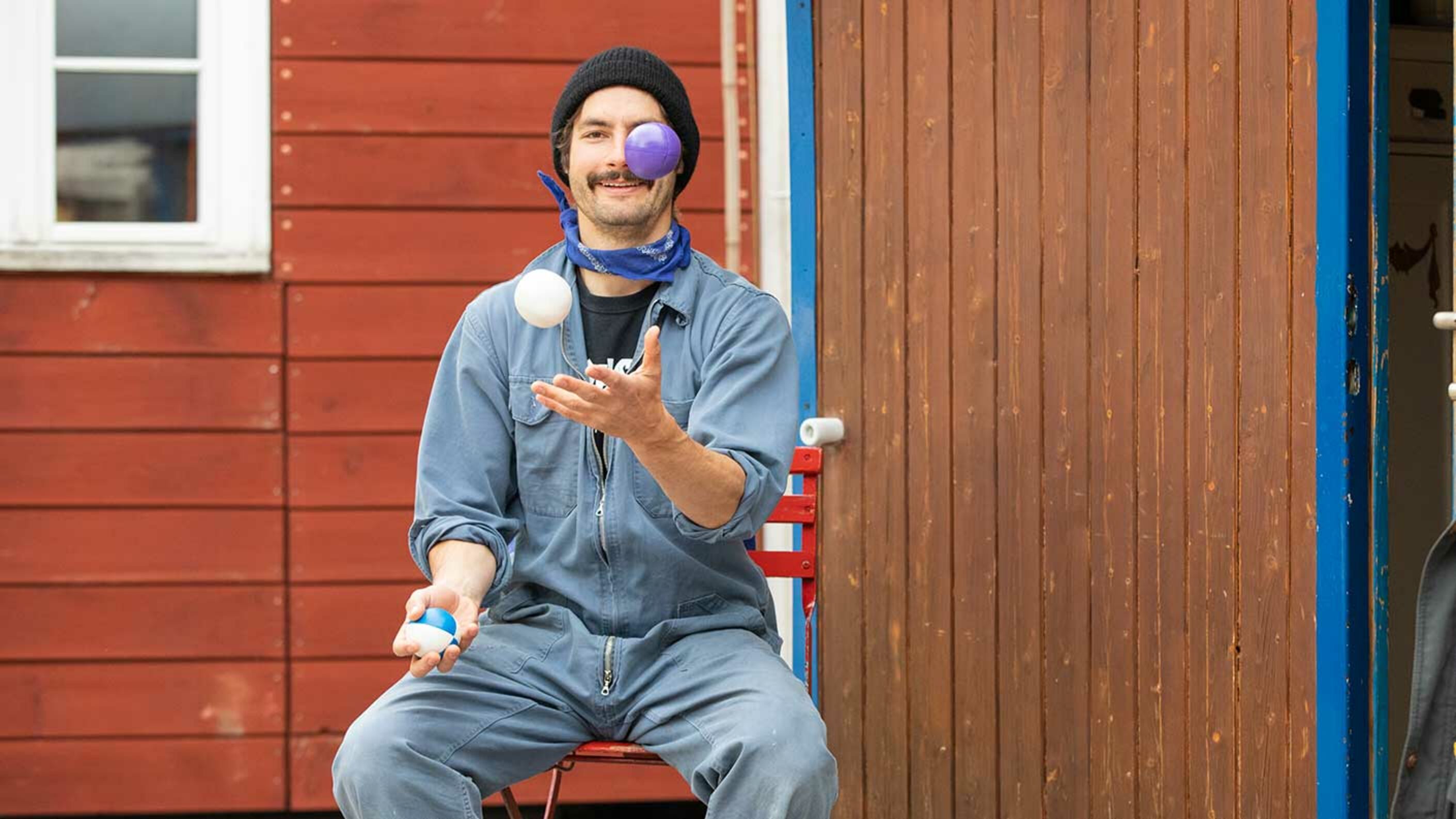 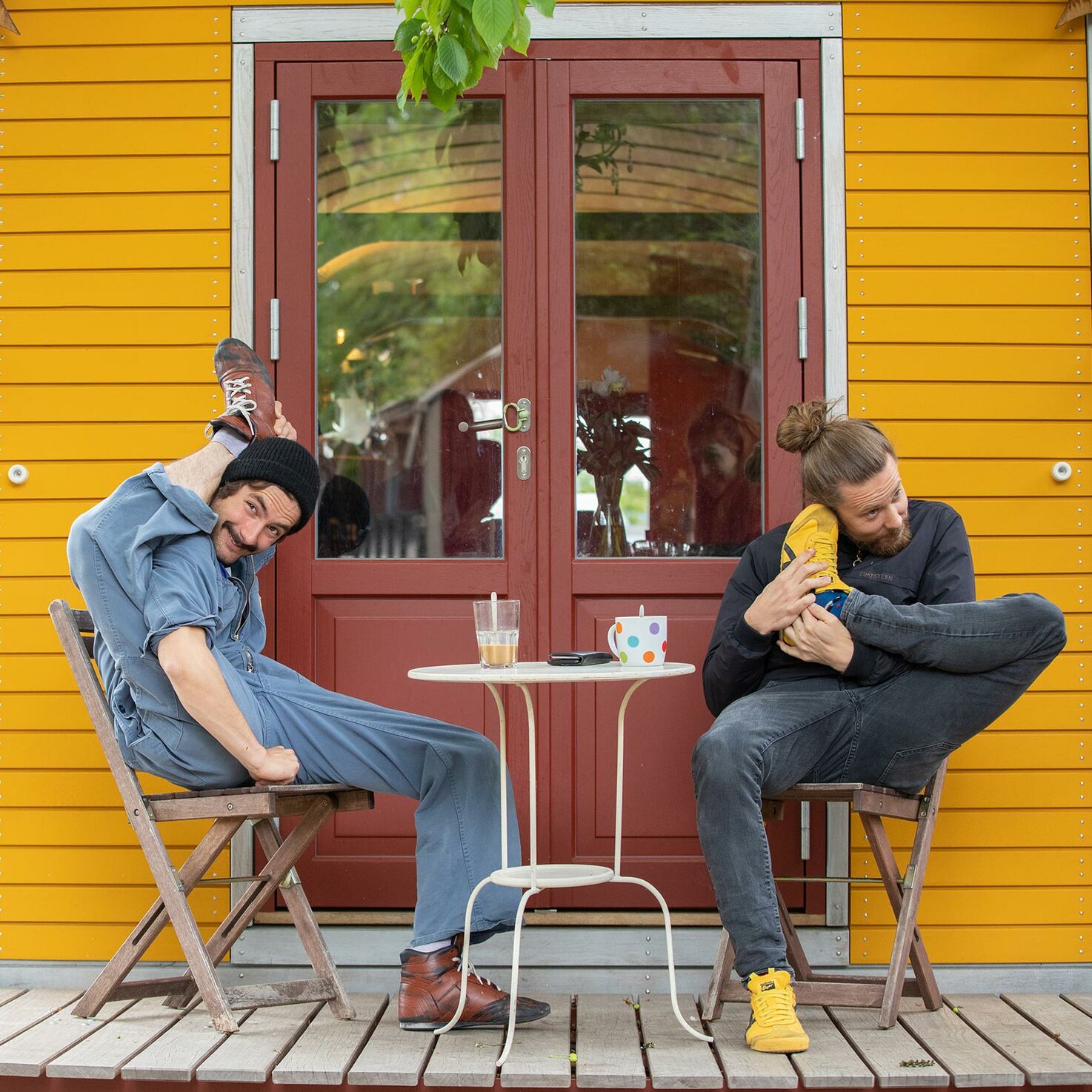 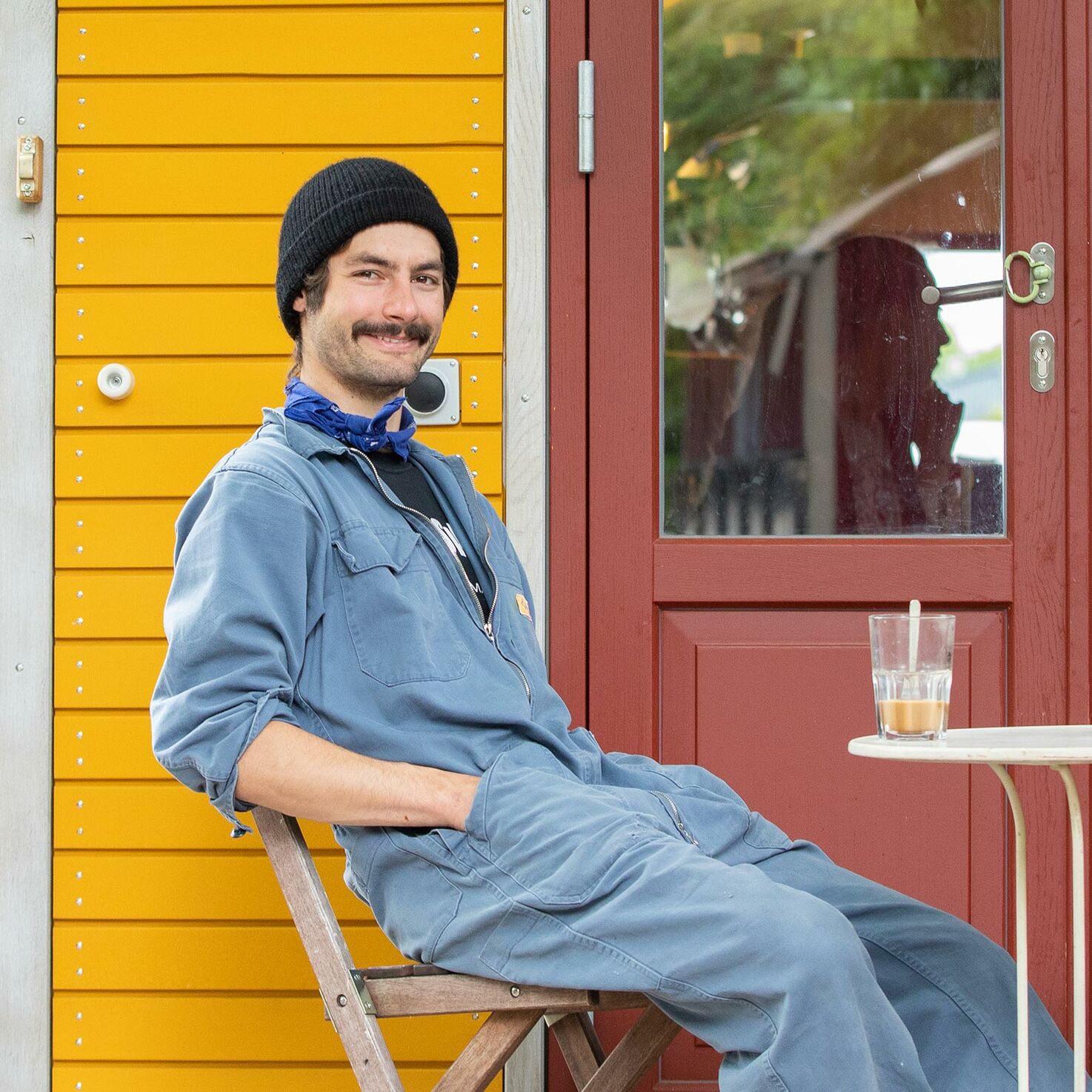 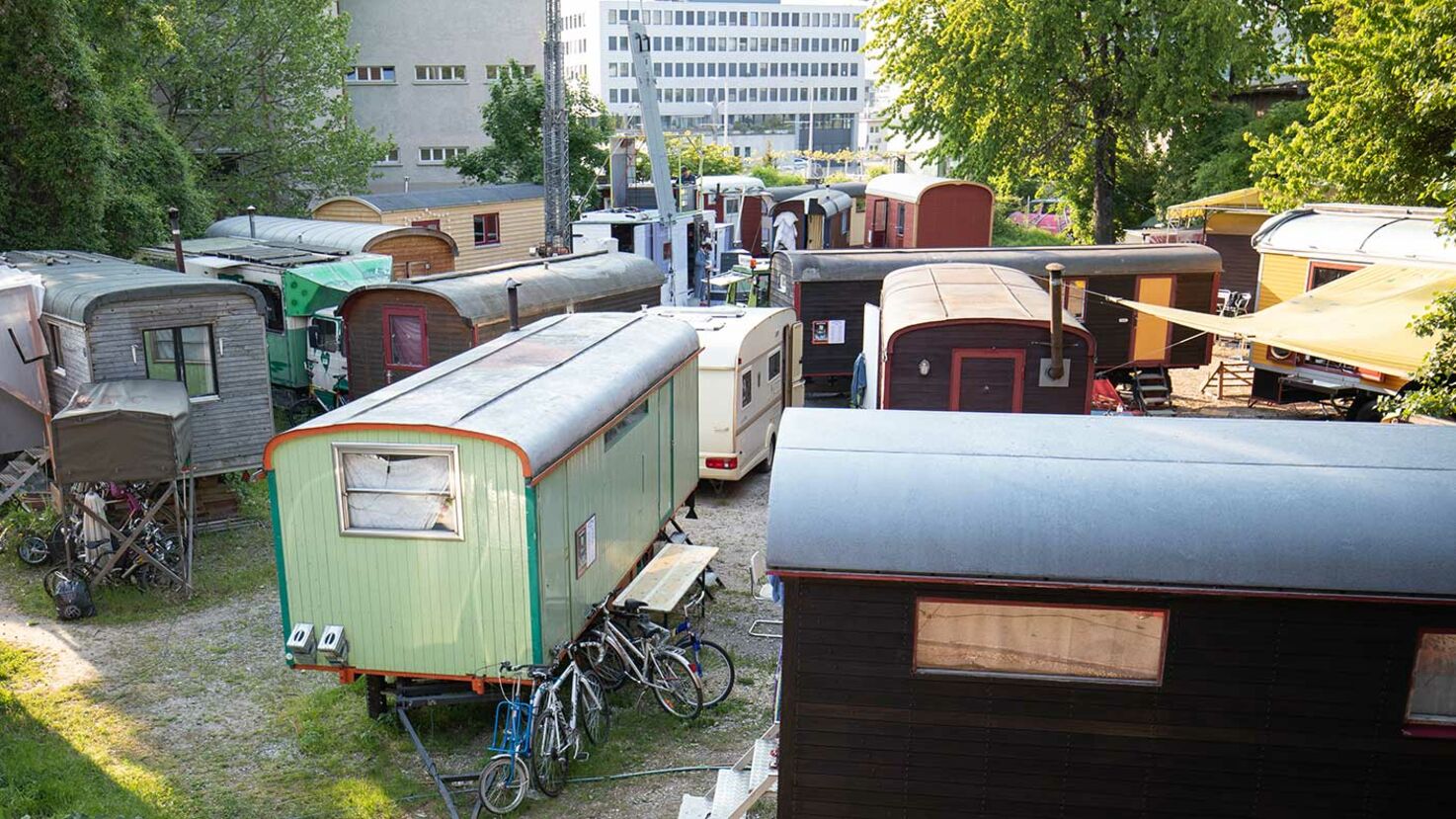 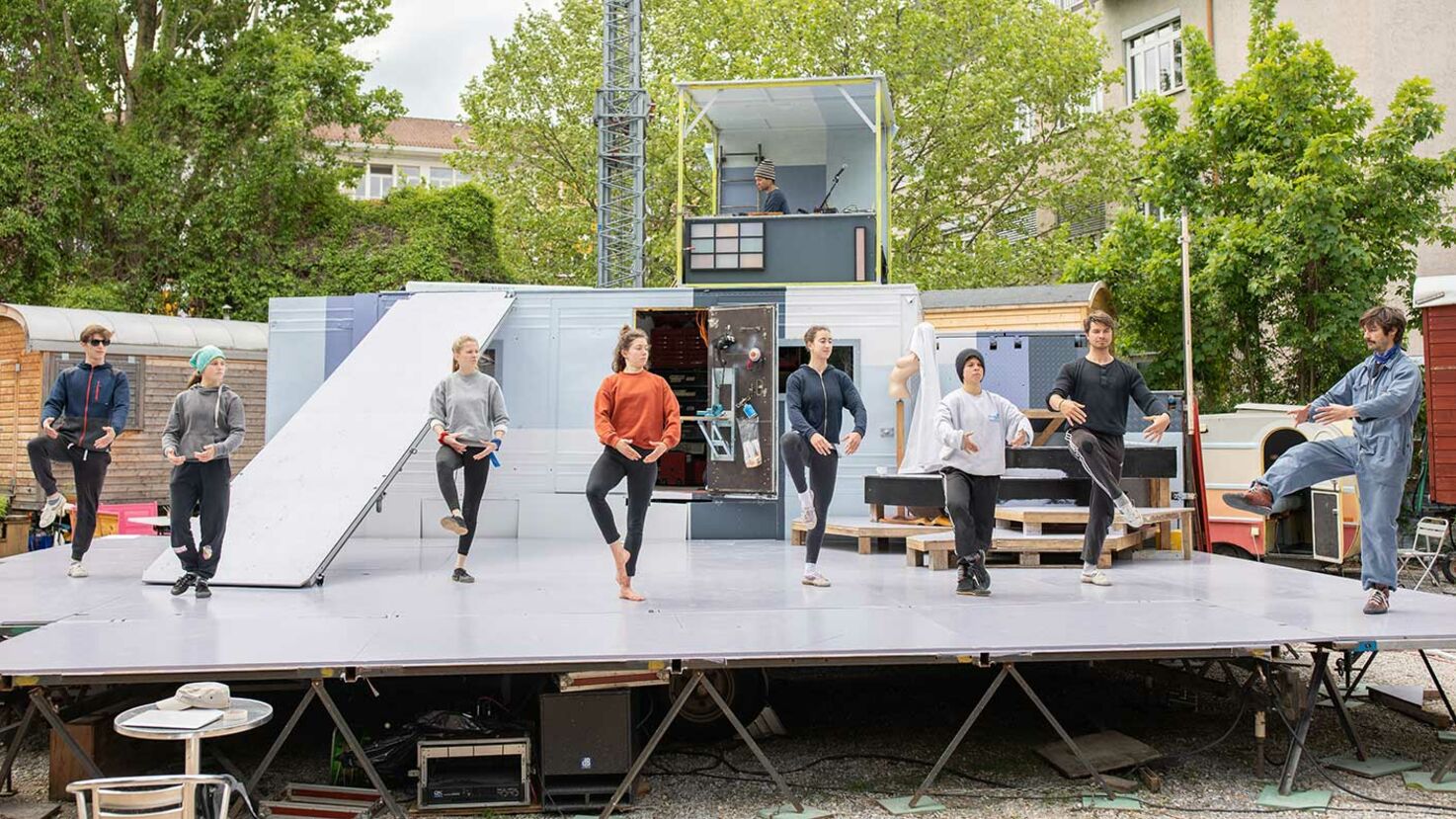 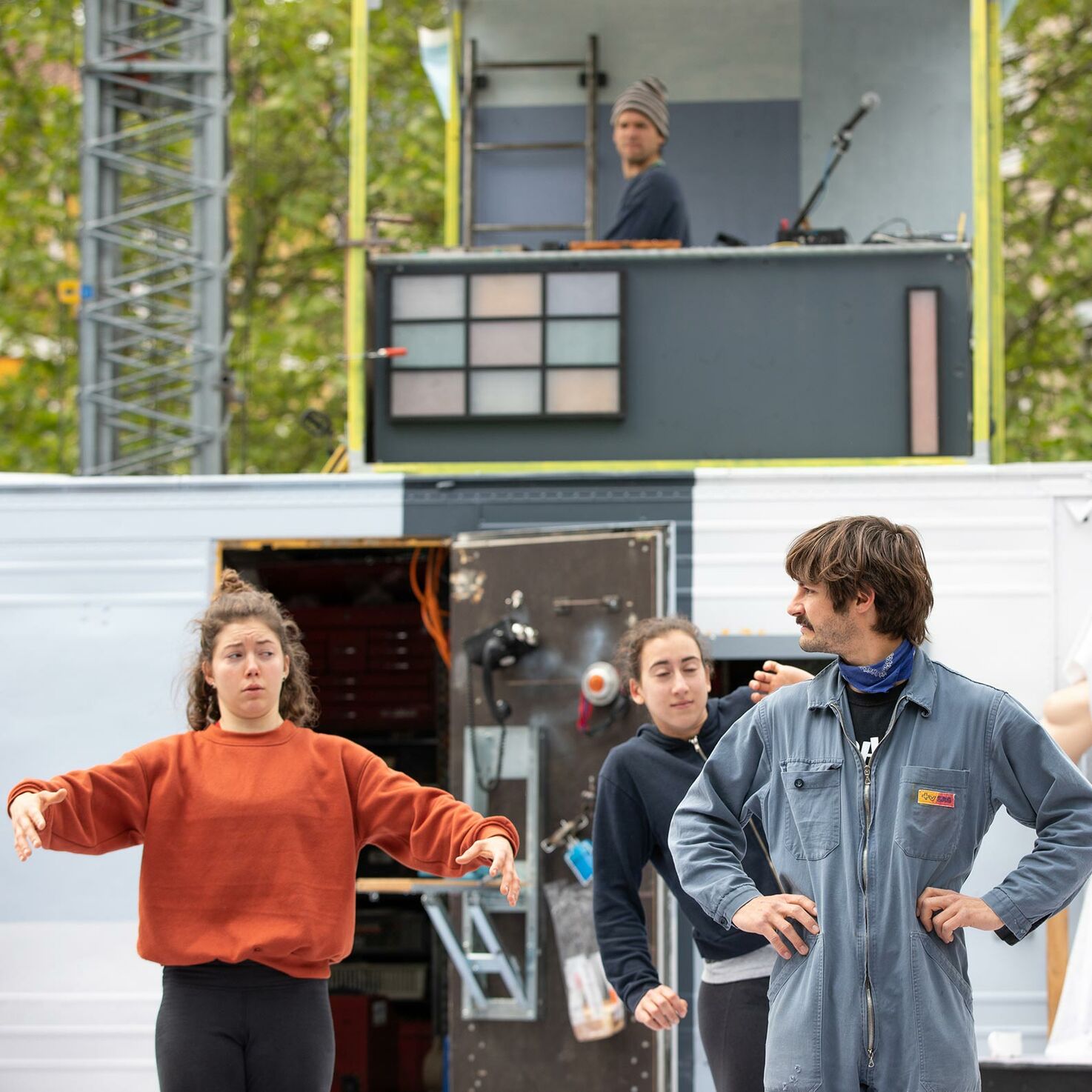 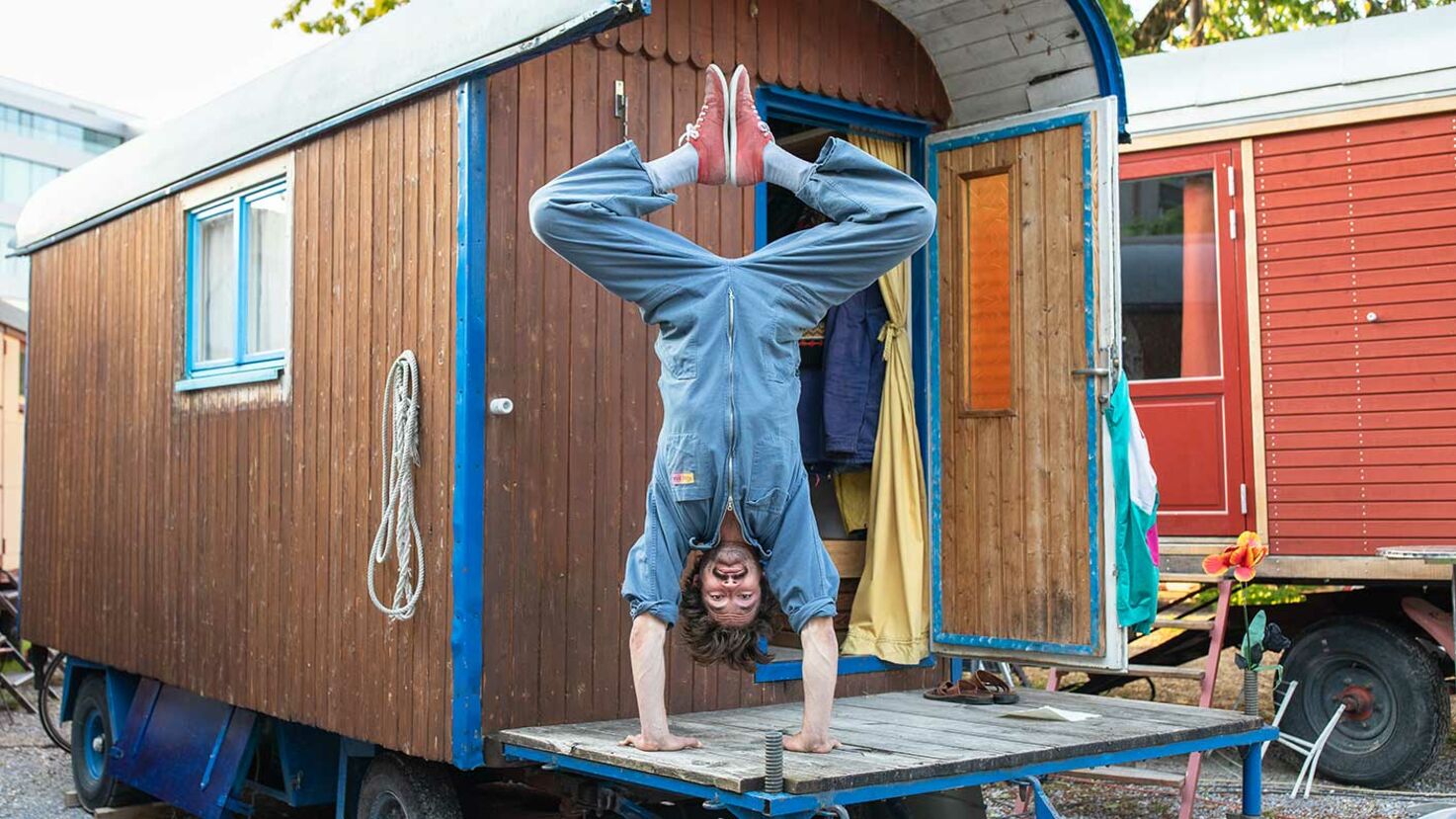 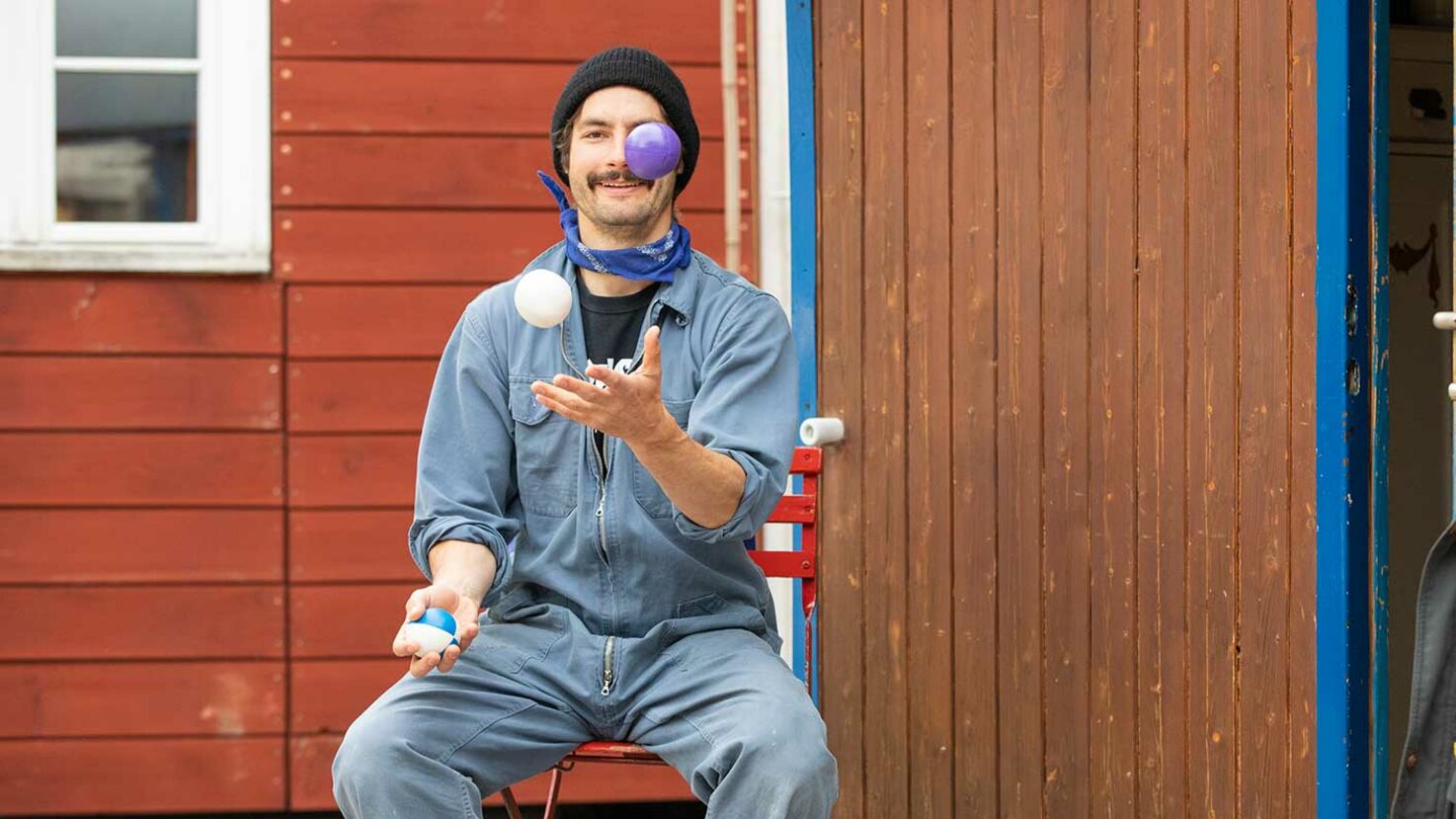 The circus performers who make up Zirkus Chnopf live in 16 caravans on the Koch-Areal. They include production manager Dave Sieger and artiste Max Gnant. Circus Chnopf is currently on tour.

The circus quarter is located on the outskirts of Zurich. Approaching it from the city centre, you find yourself passing an array of vast, modern office complexes. A factory used to stand on the Koch-Areal, and later it was taken over by squatters. In 2017 the Chnopf Association took over part of the site that they occupied, including a large factory building, a multi-storey building and parking for about 16 caravans.

Zirkus Chnopf uses these to wend their way around Switzerland on their spring and summer tours. It can take up to six hours for the circus to travel from Zurich to Bern: ‘The bigger caravans can only do 20 kilometres an hour,’ explains Dave Sieger, who has been the circus’s production manager for the last three years. Like his colleagues, he sleeps on the circus site during the season.

‘The kitchen is our pride and joy,’ says Dave. This is also housed in a caravan. Zirkus Chnopf designed it themselves and drafted in some joiners to help build it on an old truck chassis. The caravan is well insulated and has solar panels on the roof. ‘At some point, Zirkus Chnopf hopes to be generating all its own electricity,’ says Dave. Then the traction engines can also run on solar energy. At the moment it is just used to heat water in the spacious, well-equipped kitchen. It even has a washing machine. ‘Artists sweat a lot,’ says Dave with a laugh.

The Zirkus Chnopf ensemble is made up of established artistes, young performers, actors, musicians and dancers.

Dave and the rest of the core team put together a new ensemble every year. ‘We do an audition, just like on Germany’s Next Superstar.’ Dave finds the comparison amusing. The Zirkus Chnopf ensemble is made up of established artistes, young performers, actors, musicians and dancers.

This year it includes Max Gnant. He was attracted to working with people of different ages: ‘Everyone is so committed here.’ Perhaps that’s down to the new generation of performers who are brimming with enthusiasm. ‘That’s exactly what art means to me.’ Max and the rest of the ensemble rehearse eight hours a day for two months before the premiere. They also eat together: ‘They are warm and generous people,’ says Max. ‘That’s not always a given.’ On the circus’s 29th tour Max will be the character who holds the whole story together. ‘In a traditional circus this would probably be the red-nose clown,’ he explains.

Max missed Switzerland, which is why he applied to Zirkus Chnopf.

Max studied at the Dimitri School in Switzerland and also in Germany. He then had several engagements abroad but found he missed Switzerland, which is why he applied to Zirkus Chnopf. ‘I was passively homesick,’ he says. He missed the Swiss dialect, the snow and the mountains: ‘That sounds like such a cliché!’

But now Max is happy to be back in Zurich. He often meets up with his sister and visits his mother, who lives near Rapperswil. ‘And I’m trying to rekindle some old friendships.’ When he has a few days off in a row, he visits his girlfriend, who lives in Germany.

Max has been living on the caravan park for quite a few weeks: ‘It wasn’t so good in winter,’ he says, ‘but it has its own special charm.’ He spends much more time than usual outdoors and is forced to keep things tidy. ‘The caravan soon gets really messy.’ At the moment he has too much stuff: ‘I haven’t yet decided what to take on tour with me.’ Maybe he’ll buy something else, like a kettle: ‘Water stores heat and I could make myself a cup of tea on the stove.’

Caravan life might be simpler – more ‘down to earth’, as Max says – but it’s nothing like camping. ‘We have wood-fired heating and bathroom facilities.’ All the same, a lot of things that are normal in a city apartment are missing: ‘When you live simply you realise how much you take for granted.’

Zirkus Chnopf will be at the Rote Fabrik from 12 to 16 June before setting off on a tour of Switzerland. In September it will be at the Josefwiese and in the circus quarter. More information is available here.