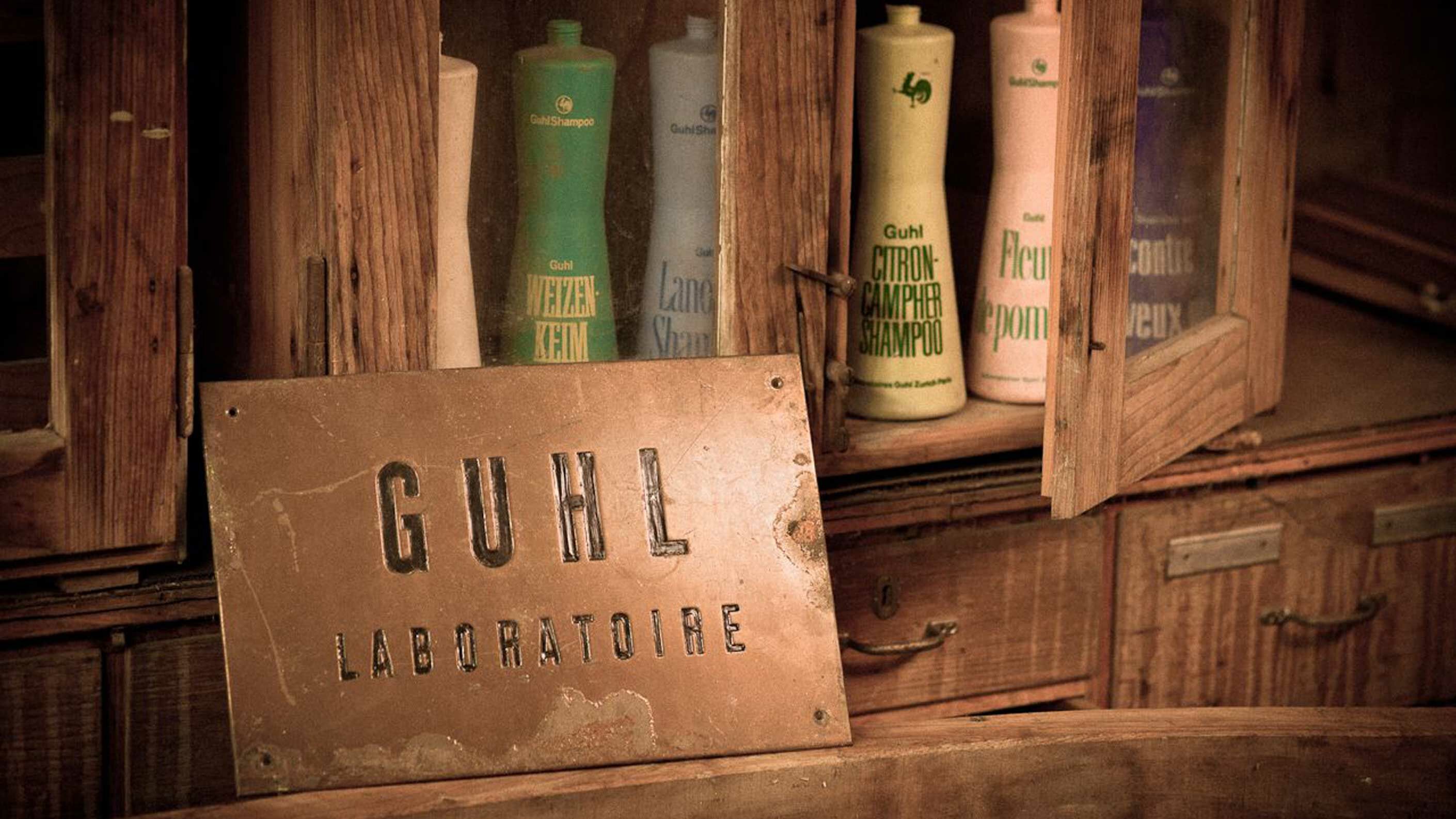 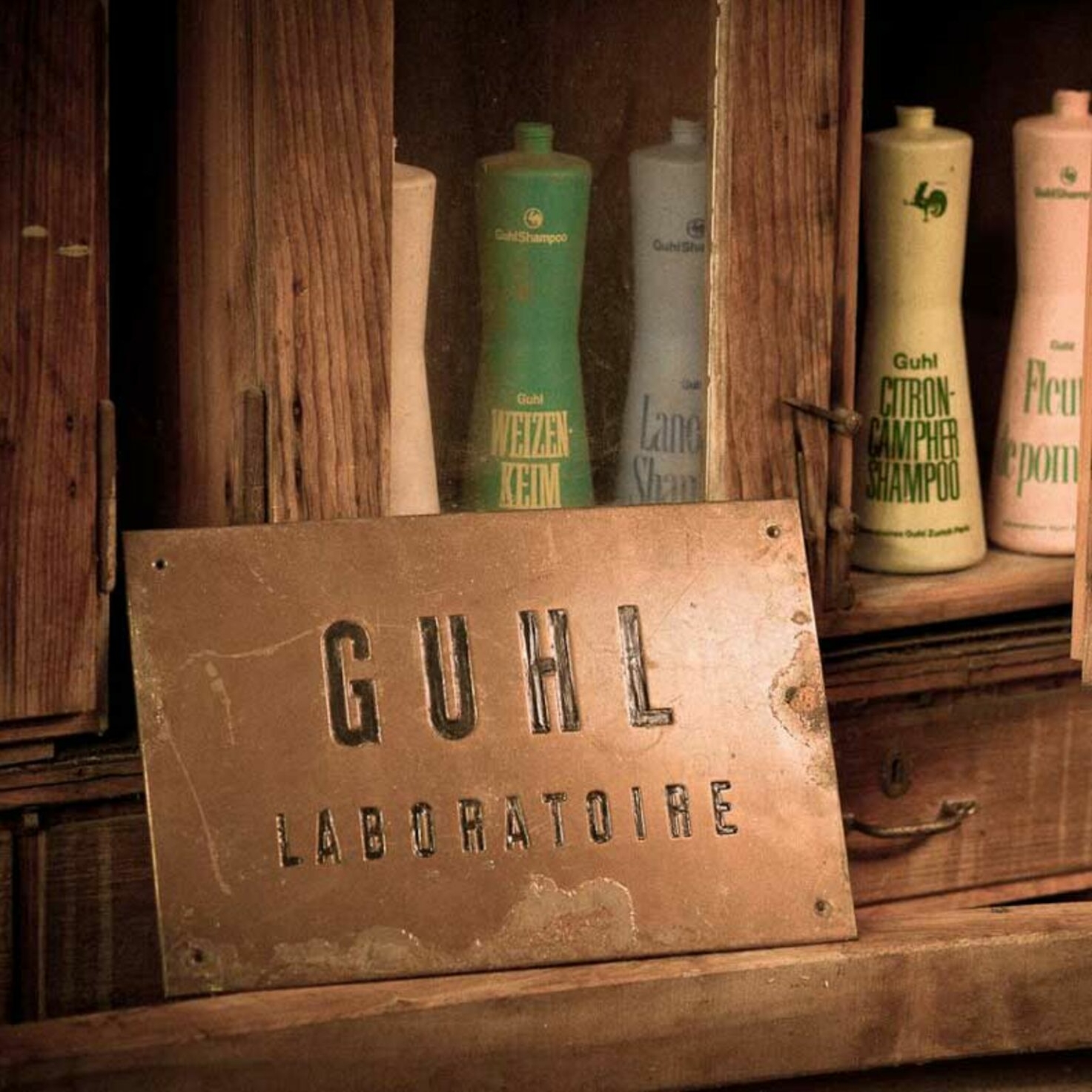 Working from a barn in the Zurich countryside, Gustav Guhl revolutionised shampoo production in the 1930s. His natural ingredients created a real buzz.

Guhl was a pioneer who was famous far beyond this country’s borders. Guhl? Yes, but not Willy Guhl, the father of Swiss design. We’re talking about Gottlieb August Guhl, the shampoo pioneer. ‘Gustav’, as Gottlieb August was called, trained as a lady’s hairdresser after leaving school, and quickly made a name for himself in Zurich as a hairstylist. But it wasn’t long before Zurich and Switzerland were too small for Gustav Guhl. He headed out into the big, wide world, creating hairstyles for wealthy ladies on cruise ships.

But it wasn’t long before Zurich and Switzerland were too small for Gustav Guhl.

Guhl’s travels also took him to China and Japan, where he was the first to introduce the short haircut. In California he met his future wife, Lyn. Gustav Guhl married the American, 10 years his senior, in 1936 and after a short course in cosmetic chemistry he returned to Switzerland. The couple bought a farm in Schöfflisdorf – Gustav’s home village – in the Canton of Zurich. The Guhls brought to the rural community not only a great deal of knowledge about hair, but also an extravagant and special lifestyle.

Gustav Guhl was one of the first celebrity hairdressers and, among other achievements, brought short hairstyles to Asia. (Photo: Laboratoire Guhl Schweiz)

A housekeeper and a maid were employed in the ‘manor’ up above the village. But these changed frequently. Guhl seems not to have been an easy boss. He loved a big performance, and was a bad-tempered character. This was in stark contrast to the globetrotter’s relationship with the village children. He often gave them a few coins or some small sausages. He also gave the children sweets, sometimes even tossing goodies from his car as it drove past. His American wife, Lyn, unlike her extrovert husband, was more interested in nature than in people.

This article originally appeared in the Landesmuseum blog. It regularly covers fascinating stories from the past. For example ‘In the hairdressing salon of the Turkish princess’.

the haircare wunderkind was producing the ‘caviar of shampoos’.

Gustav Guhl was also interested in nature, or its essences at least. After he had become aware of the connection between cosmetics and chemistry in Paris and set up his company Laboratoires Guhl, he set to work in the barn on his farm, developing shampoos. He experimented with natural substances such as chamomile, birch extracts and wheatgerm, but also with beer and egg cognac. The ingredients for his creations were often collected in the forest behind the house.

Gustav Guhl had a clever touch, and his haircare products were snapped up by an eager public. The business grew quickly, and soon the haircare wunderkind was producing the ‘caviar of shampoos’. His products also attracted interest beyond Switzerland’s borders. From 1966 onwards Guhl exported to Germany and Austria.

In 1978 Gustav Guhl died. Soon afterwards, Laboratoires Guhl was sold to the German company Beiersdorf, producer of Nivea, among others. But Guhl’s brand logo, the cockerel, stayed on for a few more years – a reminder of the former boss. The name Guhl derives from the Alemannic ‘gul’ and is a rather mocking word for ‘rooster’. Nomen est omen, because it’s a word that’s also used to describe a vain, conceited man and thus very fitting for Gustav Guhl.

The industrious hairdresser is still commemorated by a metal rooster at the entrance to the former Guhl farm. The brand, and many of Gustav Guhl’s ideas, are still current now, decades after his death, and even in the 21st century they bring a shine to many people’s hair…