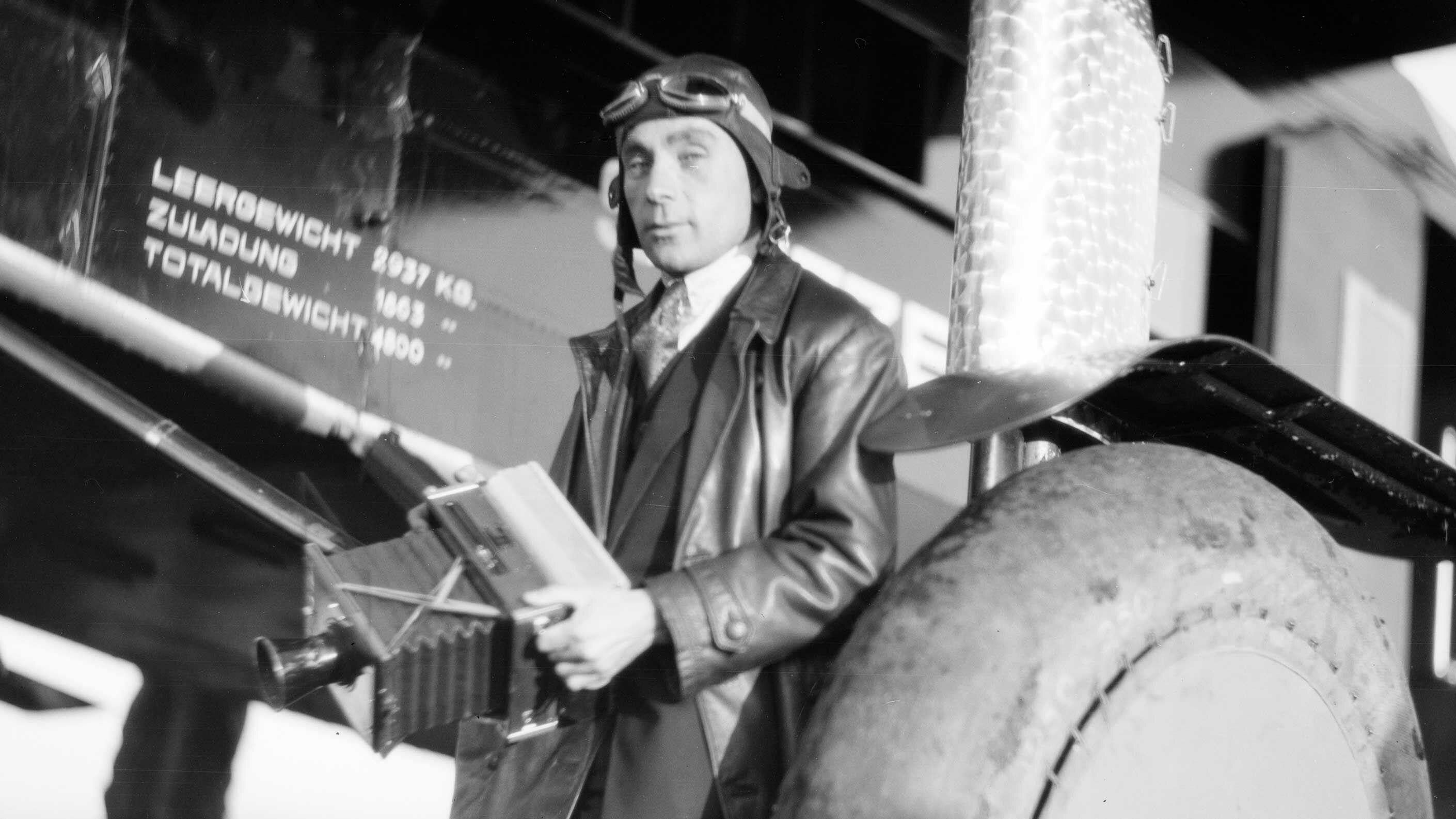 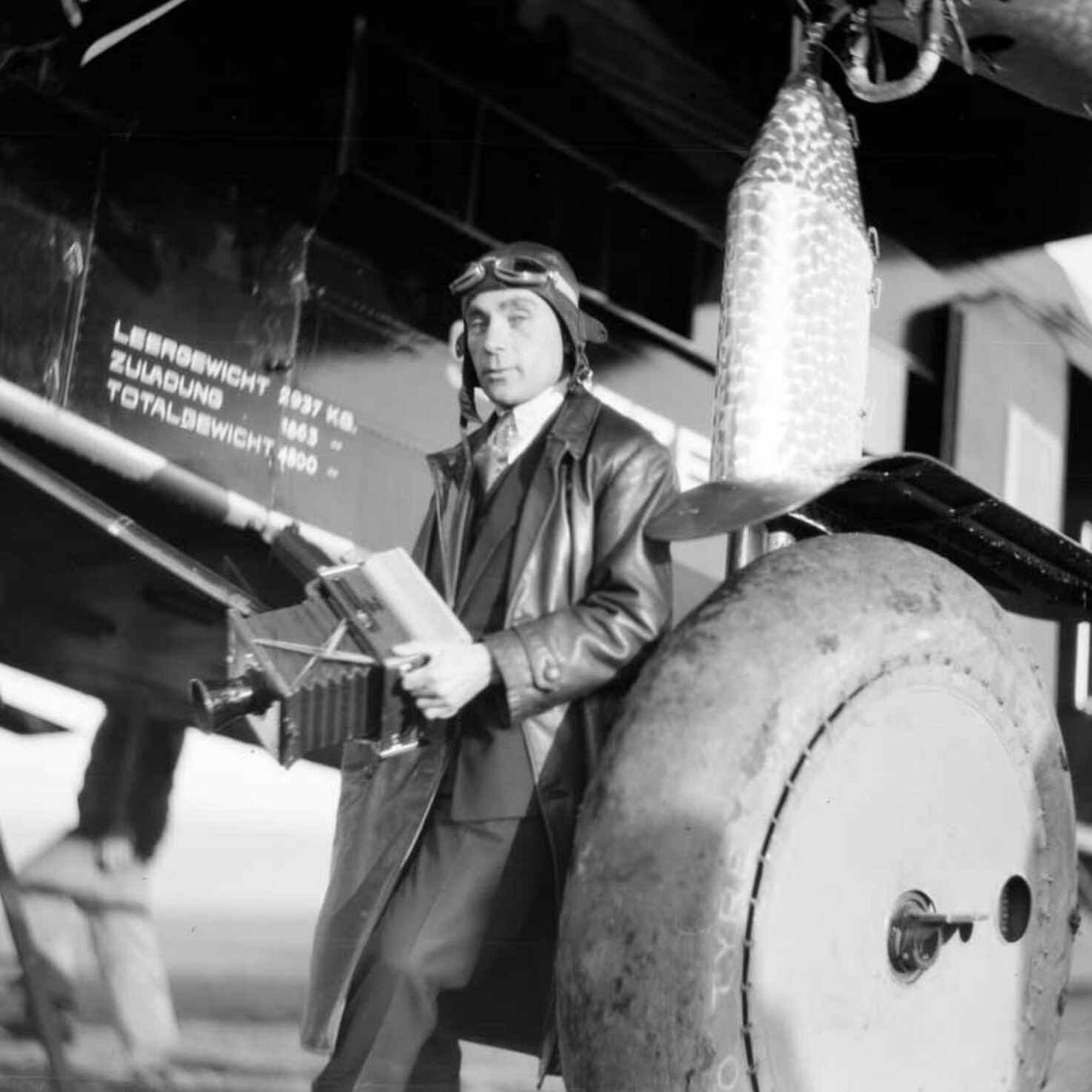 Walter Mittelholzer – with a plane and a camera

Born into a St Gallen family of bakers on 2 April 1894, Walter Mittelholzer aimed high. As a trained photographer, at the outbreak of the First World War he volunteered as a spotter for the fledgling air force. In civilian life, the combination of photography and flying became his recipe for success.

In 1942, in the middle of the Second World War, a memorial in honour of Walter Mittelholzer, who died in a climbing accident on an expedition in Styria in 1937, was unveiled at Dübendorf Airport. This ceremony, attended by General Henri Guisan, Federal Council member Elio Celio and other distinguished guests, publicly cemented Mittelholzer’s status as a Swiss national hero. Of course, the location of the memorial was no coincidence: as a pilot and entrepreneur, Mittelholzer was instrumental in the development and expansion of civil aviation in Switzerland and at Dübendorf Airport in the period after the First World War. He was co-founder, director and head pilot of the Zurich airline Ad Astra Aero. When Ad Astra Aero and Balair merged to become Swissair in 1931, Mittelholzer became the technical director of this first national airline.

However, Mittelholzer’s fame owed little to his management positions with airlines. More important were his international flying expeditions and his talents as a photographer, author, film-maker and self-promoter. In Switzerland, he created and managed a market for aerial photography. The Swiss balloonist and pioneer of aerial photography Eduard Spelterini had already taken excellent photographs from the air before the First World War. But after the war, as a photographer and experienced aerial scout, Mittelholzer quickly took the concept to the next level. Among other things, he took aerial photographs of factories for the express purpose of selling the photographs to the factory owners. As a keen mountaineer, he took photographs of the Alps from rickety propeller-driven aircraft and from great heights.

In the age of Google Earth, it’s difficult to really comprehend the attraction of that remarkable bird’s eye perspective. Mittelholzer’s aerial photographs captured the unfamiliar view of the familiar surroundings and landscape in a way that, as a real experience, was enjoyed only by pilots and air passengers. For Mittelholzer himself, aerial photography is a visually recorded change of perspective in the figurative sense. It becomes a way of getting a more complete perception of the world:

‘Aerial photography is going to play a significant role in the future. […] Another, hitherto unseen world opens up before us. It is as if the Earth has thereby gained a new face, and man a new, unflawed eye’.

Mittelholzer wrote these sentences for his 1928 publication Alpenflug. The book is illustrated with nearly 200 aerial photographs of alpine peaks and valleys, and sold thousands of copies.

This article originally appeared in the Landesmuseum blog. It regularly covers fascinating stories from the past. For example ‘Switzerland – a land of borders’.

Mittelholzer’s books about his flying expeditions abroad, which he published at frequent intervals, were also best-sellers: Im Flugzeug dem Nordpol entgegen (1924), Persienflug (1926), Afrikaflug (1927), Mittelmeerflug (1930), Kilimandjaro Flug (1930), Tschadseeflug (1932) and Abessinienflug (1934) documented his flights over the North Pole area, Persia, Africa, the Mediterranean, Kilimanjaro, Lake Chad and the Ethiopian Empire. Like Alpenflug, these titles are also lavishly illustrated with sections of photographs. However, Walter Mittelholzer didn’t limit himself to pictures from the air. Outside Switzerland, he also photographed and filmed at ground level. In Africa and the Middle East, he became a reportage photographer of his own expeditions, and of the ‘countries and peoples’.

Outside Switzerland, he also photographed and filmed at ground level.

Public expectations of the reports and images that Mittelholzer created abroad were high. The Neue Zürcher Zeitung wrote on 22 March 1927 of the Zurich welcome for Walter Mittelholzer – the other two members of the expedition on the Africa flight, Arnold Heim and René Gouzy, are mentioned only in passing – after his return from Cape Town:

‘The stages and reports of the daring flight, which bear witness to Swiss enterprise, perseverance, adventurousness and air safety, were followed avidly throughout the country; the Swiss people know what to expect from their Mr Mittelholzer, who can not only pilot a plane across unknown countries, but also photograph and film in flight.’

Against the colonial backdrop of exotic, ‘unknown’ countries, Mittelholzer was therefore expected to embody and publicly epitomise a whole string of ascribed Swiss virtues. And the NZZ also reports on how Mittelholzer, the consummate national hero, handled the pressure of this expectation:

‘The raid, emphasised [Mittelholzer], was not a bid to break records, but an exploration in image, word and film: the expedition has returned with rich booty, conscious of having met, in the main, the expectations of the general public.’

Looking back it seems as if the memorial, though dedicated only years later, was already in the air way back then.

Why go to the lake when it’s so much more relaxed in the old town?