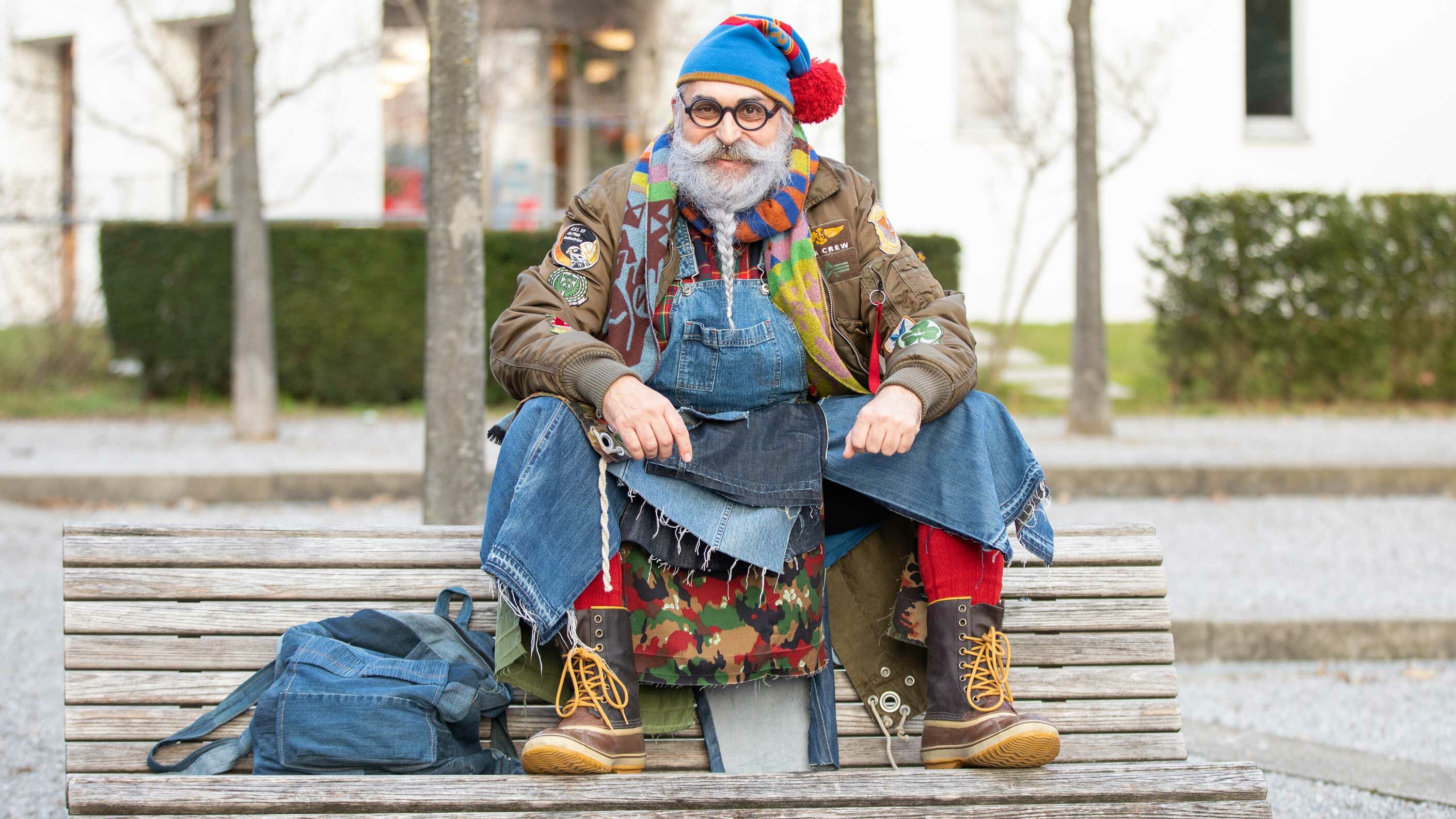 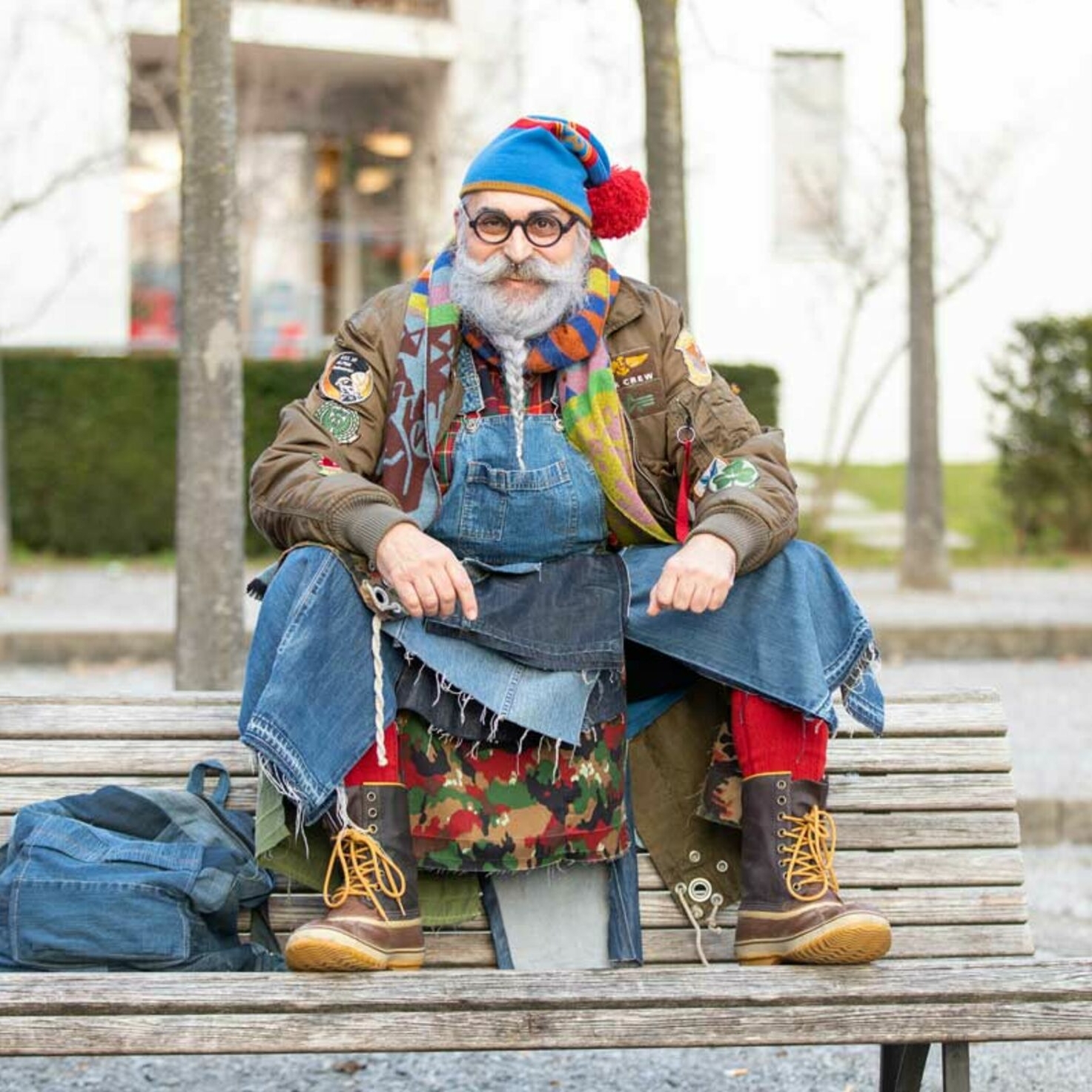 Gerold Brenner likes to wear skirts. The fashion designer causes a bit of a stir – and not only in Zurich. German-born Gerold talks to us about freedom, courage and sustainability.

Gerold, you were head designer at Manor for several years. Why did you decide to leave?

I began to realise that sustainability wasn’t really being put into practice, and my work no longer reflected my creativity. Commercial collections look the same every year and have nothing to do with the zeitgeist. Business managers often don’t understand tomorrow’s trends. They’re just afraid that new creations won’t sell. As a designer I constantly had to compromise.

I couldn’t follow my own style at that time. Throughout my career, I’ve had to fit in, both visually and creatively – ever since I started my apprenticeship as a tailor! Otherwise I’d just be dismissed as a creative weirdo who couldn’t be taken seriously. Now that I’ve left, I’m free to wear whatever I like. My style is now a mix of different cultural, historical and gender-neutral elements. I call it fusion style.

‘I want to free people from the constraints of society.’

Today your trademark look is the men’s skirt.

Even as a child I couldn’t understand why girls were allowed to wear trousers, but boys couldn’t wear skirts. In Africa and Asia, men often wear skirt-like clothes. But it’s a huge taboo in the Western world, and it’s one that I want to break.

And have you succeeded?

I give regular talks on this subject. Two years ago, I showed my collection at a fashion trade show in Amsterdam under the motto ‘Dress like a man – wear a skirt’. I attract positive feedback in the street and on Instagram, but also get lots of negative comments. But I’ve noticed that things have changed over the last few years. And I’m contributing to that.

How do you deal with hate messages?

Most of the people who message me have deeply rooted religious or patriarchal beliefs. They’re generally not interested in my arguments. C’est la vie!

What’s your favourite way of wearing a skirt?

I usually combine the skirts with traditional masculine garments such as jackets. And my beard gives me an obviously masculine look. People find it confusing. But I also love it when men play around with other more feminine elements like see-through fabrics and lace. Why should so many things be for women only?

Where can you buy men’s skirts?

There’s nowhere in Zurich, and it’s even difficult in major cities like London and Paris. Buyers are afraid they won’t be able to sell them. So you have to go to a tailor or, unfortunately, order them online. I regularly make skirts for customers.

‘I usually combine the skirts with traditional masculine garments such as jackets.’

You co-manage the Schaufensterklub and sell your own designs. What makes them special?

It’s very simple – I have to like them personally. Sustainability is my main priority: Where do the fabrics come from? How were they dyed? Who made them and how? I actually make everything myself, sometimes with the help of a friend.

Who are your customers?

They’re all very different. I make a lot of unisex things. My customers are usually over 40. Handmade doesn’t come cheap, so buying a garment is a long-term investment. This isn’t throwaway fashion! But the average age is changing. I often get orders from Japan. They appreciate craftsmanship more than here. In Switzerland, people often can’t understand how a handbag or garment made of upcycled materials can cost 800 francs. But they take me at least 40 hours to make – and people are prepared to pay many times that amount for well-known designer labels.

‘Like many of my colleagues, I can’t make a living from making clothes.’

What does this mean for you?

Like many of my colleagues, I can’t make a living from making clothes. I’m also no longer prepared to make commercial compromises. So I give regular talks, often about sustainability in fashion, and I act as a consultant. I also offer upcycling at the store. I would like to offer courses on this, but unfortunately we don’t have enough space.

Do sustainability and fashion really go together?

Even now, there are a lot of people who don’t care whether their clothes are sustainable. And there has been a lot of greenwashing in recent years – the cotton may be organic, but the working conditions are still poor. But either way, it’s not possible to be 100 per cent sustainable. There’s always a catch. That’s why we all need to reduce our consumption. I rarely buy new things, partly because I find most of them boring.

Last year you won the Mode Mut Mann award in Düsseldorf. Was it a great honour?

I was delighted, of course. And it encourages me to continue on my path. But at the end of the day I’ll always be an outsider.

Like a lot of cities, Zurich thinks it’s very open. You can generally live how you like as long as you don’t disturb someone else’s freedom. I often get nice compliments. But unfortunately, like so many places nowadays, money rules. A lot of people just want to belong, so they use designer labels as a status symbol.

‘I often get nice compliments.’

Is it that bad?

Of course, creative, interesting people also live here. For me, it’s important to show that you don’t have to fit in. All kinds of people tell me that I have given them the courage to be themselves. I want to free people from the constraints of society. That’s why I have also got involved in the LGBTQI+ community. Conventions and stereotypes have to be broken down in every area. You should be able to live life on your own terms!