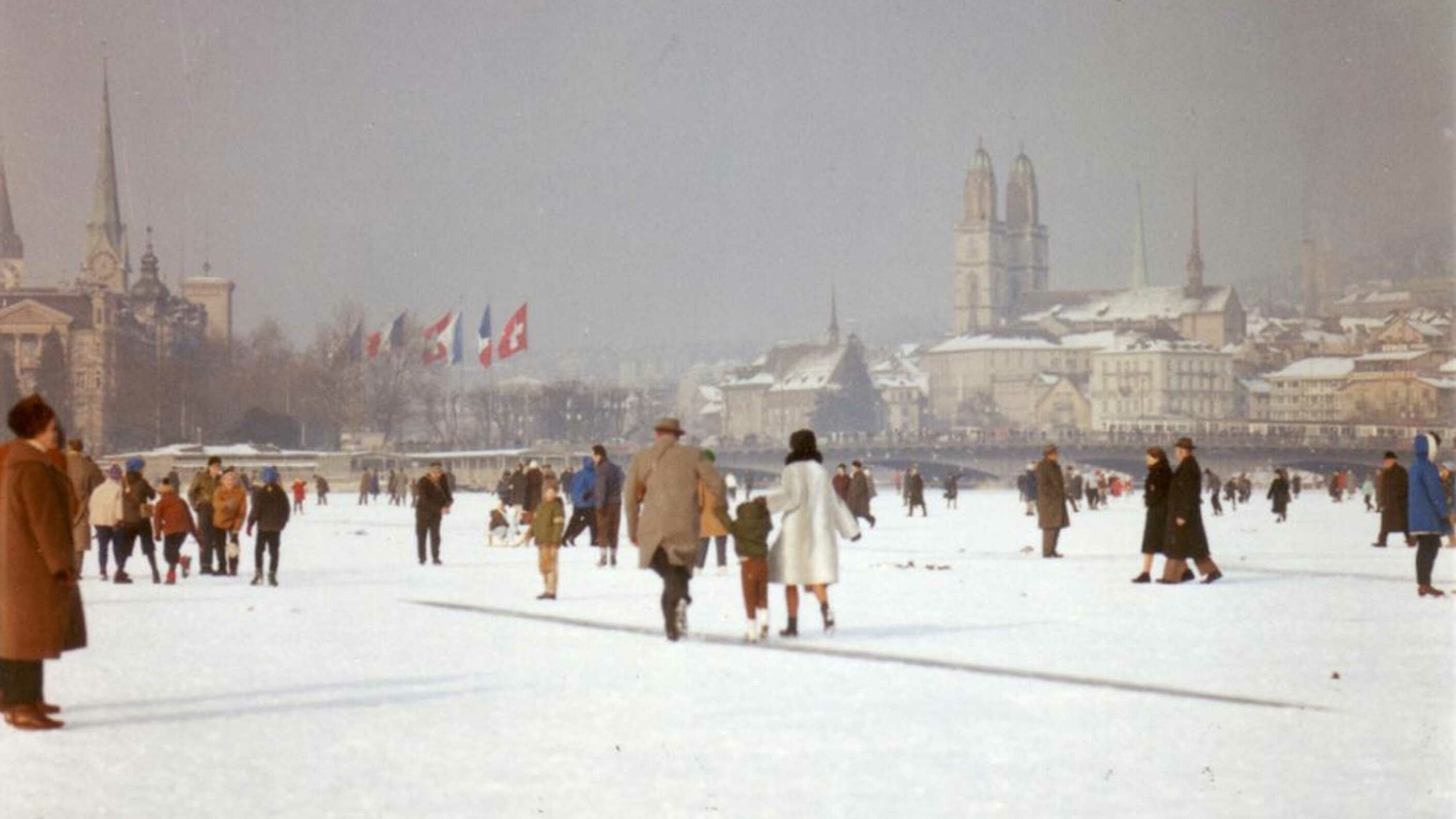 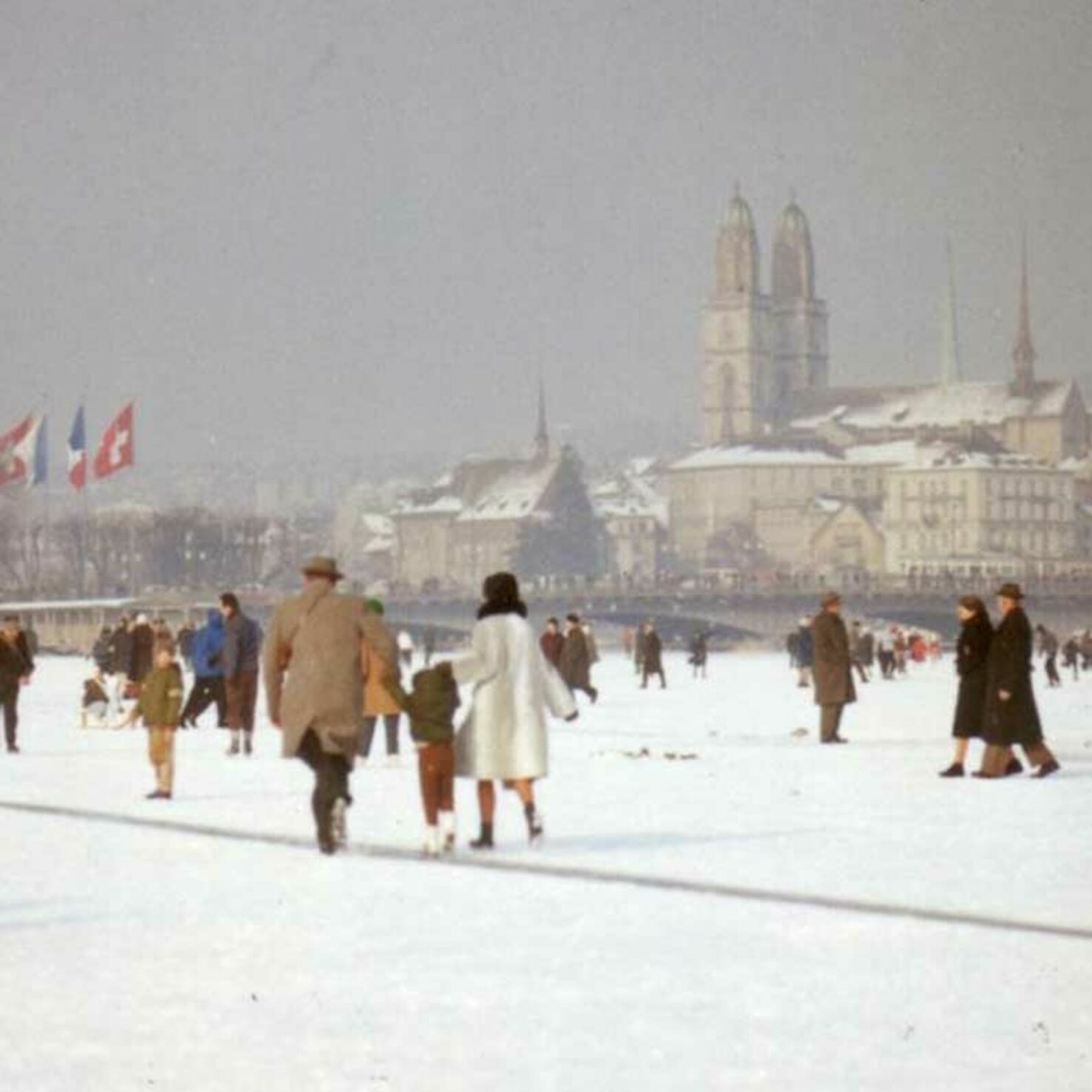 Food stalls, concerts and skating policemen – when the lake froze over in the winter of 1962/63 it became a magnet for the people of Zurich. But even before that, people loved nothing more than to go out on the ice of frozen Lake Zurich.

In 1880 the Neue Zürcher Zeitung reported: ‘Nearly every day, a little celebration is happening somewhere.’ But that winter the people of Zurich weren’t gathering in ballrooms and restaurants, but on frozen Lake Zurich. People even went out on the ice after dark.

But it wasn’t the horse-drawn sleighs and brass bands that surprised the NZZ journalist the most. It was the fact that more women were skating than men. ‘Twenty or thirty years ago, it would have been unthinkable for a lady to indulge in such a pastime. Different times, different customs!’ he wrote. In 1880, the lake stayed frozen for nearly a month.

In 1891, the city’s whole social life played out on the ice.

Just eleven years later, Lake Zurich froze over once again. From the end of January to the beginning of March, the city’s social life once again took to the ice. The riding club invited people to enjoy sleigh rides, the Neumünster cycling club organised a race, and soldiers conducted their drills on the frozen lake.

But this unusual state of affairs also raised a few concerns, as the NZZ reported: ‘Office hours are being loosely observed, university lectures are being held to empty seats, and schoolboys are rushing out of school to go on the ice.’ The frozen fish that was cut out of the Schanzengraben also attracted the crowds. Curious onlookers spent ages wondering how the fish could have frozen while swimming. But finally the policeman who had cut the fish out of the ice admitted that the fish had frozen on its back – and he had simply turned the block over.

Once again, tens of thousands of people ventured out onto the ice.

The next time the lake froze was in February 1929. Once again, tens of thousands of people ventured out onto the ice – until a siren sounded and everyone had to leave it without delay. A little later, the lake opened up again for a week and even acted as a landing strip for a plane.

The last time Lake Zurich froze over was in 1962/1963. From mid-November onwards, temperatures stayed below zero. The lake continued to freeze over from early December until finally, on 25 January, it was no longer navigable for boats. Two days later, a sign appeared in the ice between Tiefenbrunnen and Wollishofen: ‘Johnny S. and Heinz J. crossed the lake tonight.’

On 1 February 1963, the water police officially opened the ice to the public.

On 1 February, the water police officially opened the ice to the public after experts had checked its thickness in five different locations and found that it measured up to 13.5 centimetres. Large signs on the lakeshore listed ten rules, including: ‘Refrain from making noise on the ice so that calls for help can be heard.’

The locals headed out onto Lake Zurich en masse after buying skates at the expensive sports shops on Bahnhofstrasse or from the cheaper second-hand shops. Swiss TV commented at the time: ‘When the lake froze, fashion snobbery froze too.’

Some people simply glided on the ice in their normal shoes. Dogs and children raced around, and police officers even patrolled on skates. After dark, city officials checked whether the ice was still strong enough to support the crowds. The head of this ice police was ‘Admiral’ Heinrich Müller, who used a motorised sledge to keep an eye on Lake Zurich. This went on until 8 March 1963, when the ice began to melt.