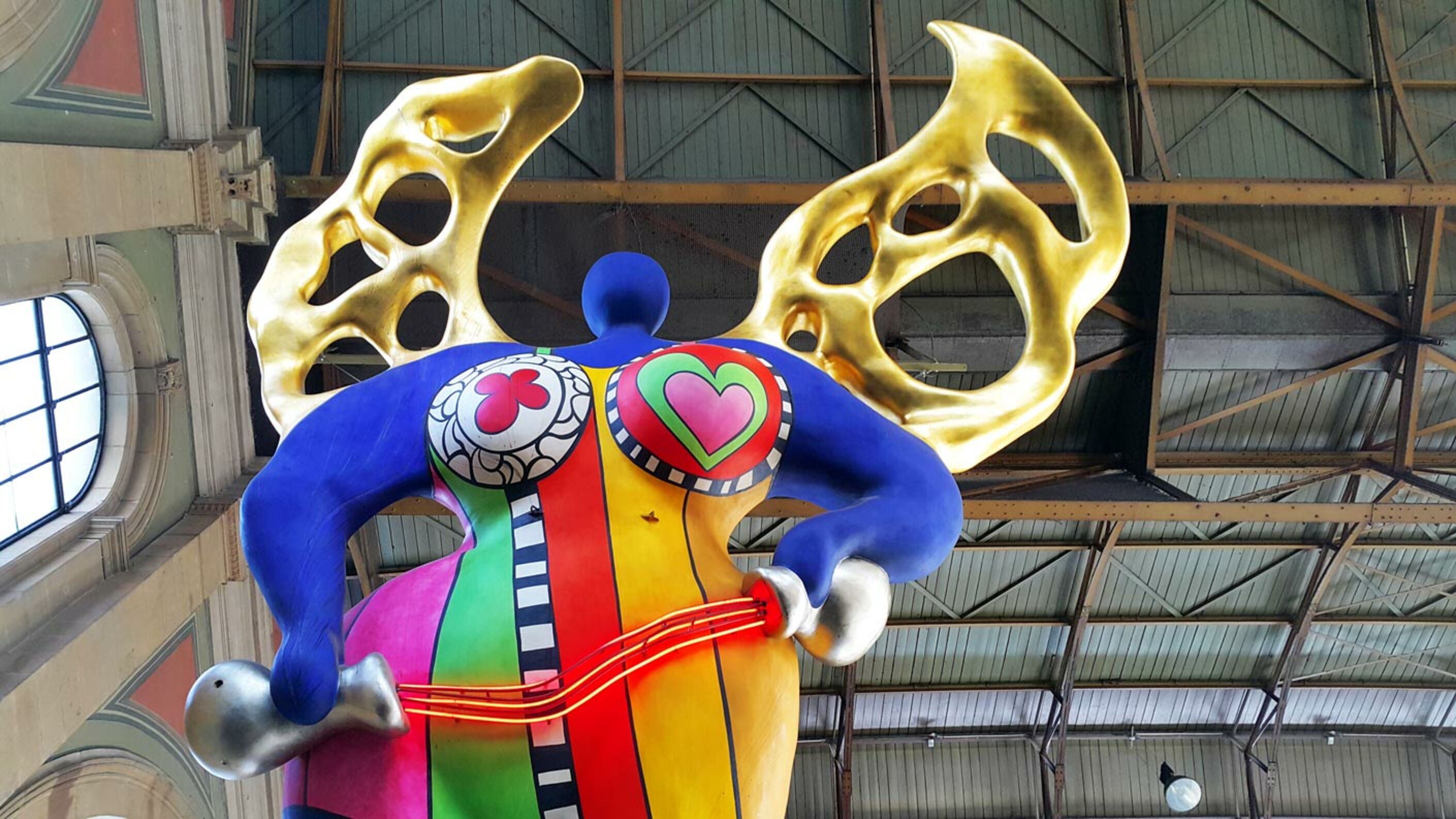 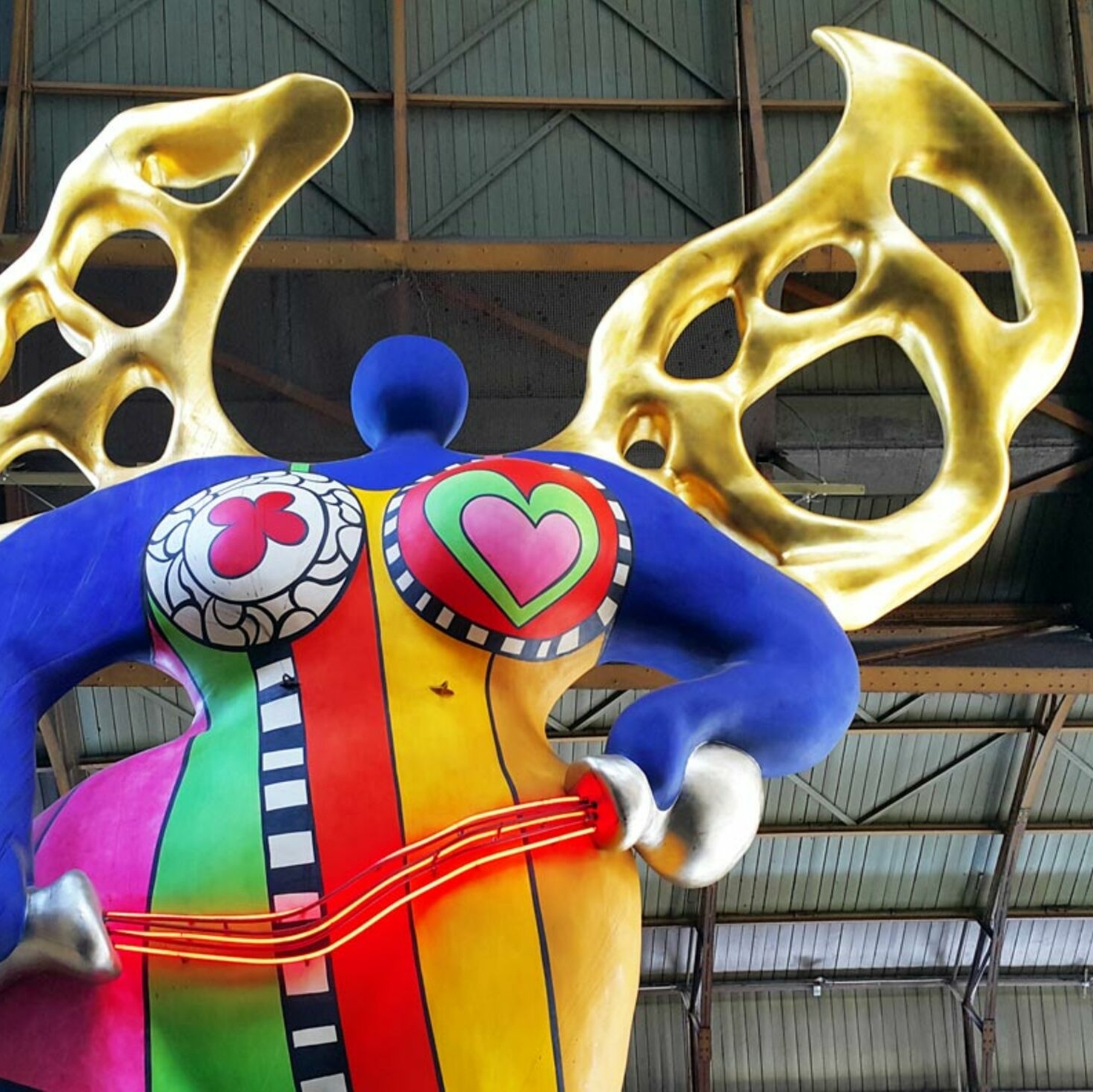 This plump guardian angel has been hovering over the concourse in Zurich’s main station for more than 20 years. Where does this 1.2-tonne, 11-metre-tall sculpture come from? And what does ‘l’ange protecteur’ really symbolise? Our contributor Luisa Aeberhard went looking for clues and found out why the angel needs to be handled with special care.

She has some rather unkind nicknames. Many people call her ‘the fat woman’ or simply ‘the fattie’. Sometimes she’s called ‘Sennentuntschi with wings’ after a Swiss alpine fable. I went to meet her in her home – a station concourse that is 130 metres long, 42 metres wide and 24 metres high. The first locomotives arrived here in 1871, when clouds of steam and smoke rose up to the ceiling. Today, more than 400,000 people come and go through the station every day or linger a while in the shops and restaurants.

She’s dressed in a bright swimsuit. Her round breasts are adorned with a heart and a cloverleaf. She’s happy to show off her curves, and they’re pretty hard to miss. Her sturdy arms and legs are blue – a soothing colour that stands for safety. Her relatively delicate head has no face. Broad, golden wings shimmer on her back.

Supported by four steel cables, the 1.2 tonne, 11-metre-tall sculpture hovers 15 metres above the ground. Her left leg is slightly bent as if she’s about to fly off and do a little dance in the air. I have the feeling that the polyester angel wants to float through the concourse or take a trip on one of the trains.

The angel known as ‘l’ange protecteur’ – the guardian angel of Zurich main station – was a gift from the security company Securitas to mark SBB’s 150th anniversary. She has been hovering over the station concourse and watching over travellers since 14 November 1997. But the journey from her birthplace to Switzerland was not an easy one. The fact that she’s a little broad in the beam meant she couldn’t fit in a cargo plane. So she was split into three and transported by ship from California via Rotterdam to Basel. From there, the angel came to Zurich on a low-loader – to Switzerland’s largest railway station, where she was reassembled at 2 o’clock in the morning.

Her mother, the artist Niki de Saint Phalle, accompanied her on the journey but apparently was a little grumpy. It’s said the French-Swiss painter and sculptor complained about the lack of luggage service at Zurich station, which prompted SBB to resume its porter service. It was financed by the sale of silk foulards – designed by the artist.

Her mother, the artist Niki de Saint Phalle, accompanied her on the journey but apparently was a little grumpy.

I look at the two silver pitchers that the angel is clutching in her hands. They are connected by three illuminated red wires. Apparently, they represent lifelines that are flowing with positive energy. At the angel’s inauguration, Niki de Saint Phalle said, ‘Everyone wants to feel protected when they’re travelling. And in today’s world, we need very special protection.’

2002 was a sad year for the angel – her mother passed away. For a few days she wore mourning ribbons in memory of the creator of the famous Nana sculptures. Niki de Saint Phalle’s colourful Nanas were at one time a symbol of happy, liberated women. Later on, the artist saw her oversized female sculptures as harbingers of a new matriarchal age: ‘They represent the independent, good, giving and happy mother. So it’s not surprising that they evoke such strong emotions of love and hate in people.’

Niki de Saint Phalle’s colourful Nanas were at one time a symbol of happy, liberated women

The angel has problems with condensation dripping from the ceiling, bird droppings and the brake dust of the trains. Niki de Saint Phalle painted the surfaces with watercolours and did not apply a protective coating. To prevent the paint from fading, the plastic can only be cleaned with a feather duster and a compressed air spray. She is cleaned three or four times a year – a painstaking process that is done at night and takes about 90 minutes. RailClean employees ride up on a cherry-picker to give the angel a little freshen-up.

Tourists stream through the concourse to the tram station. I’m engulfed by echoing voices and clouds of perfume. I often feel lost here, in this huge concourse, with its jumble of smells, languages and colours. It’s always full of hustle and bustle.

I look up at the angel. There she hovers, like a plump mother who watches over me, one of her charges, and envelops me in her invisible cocoon. Wrapped in this mantle, I forget all about the milling crowds. I feel snug and secure.