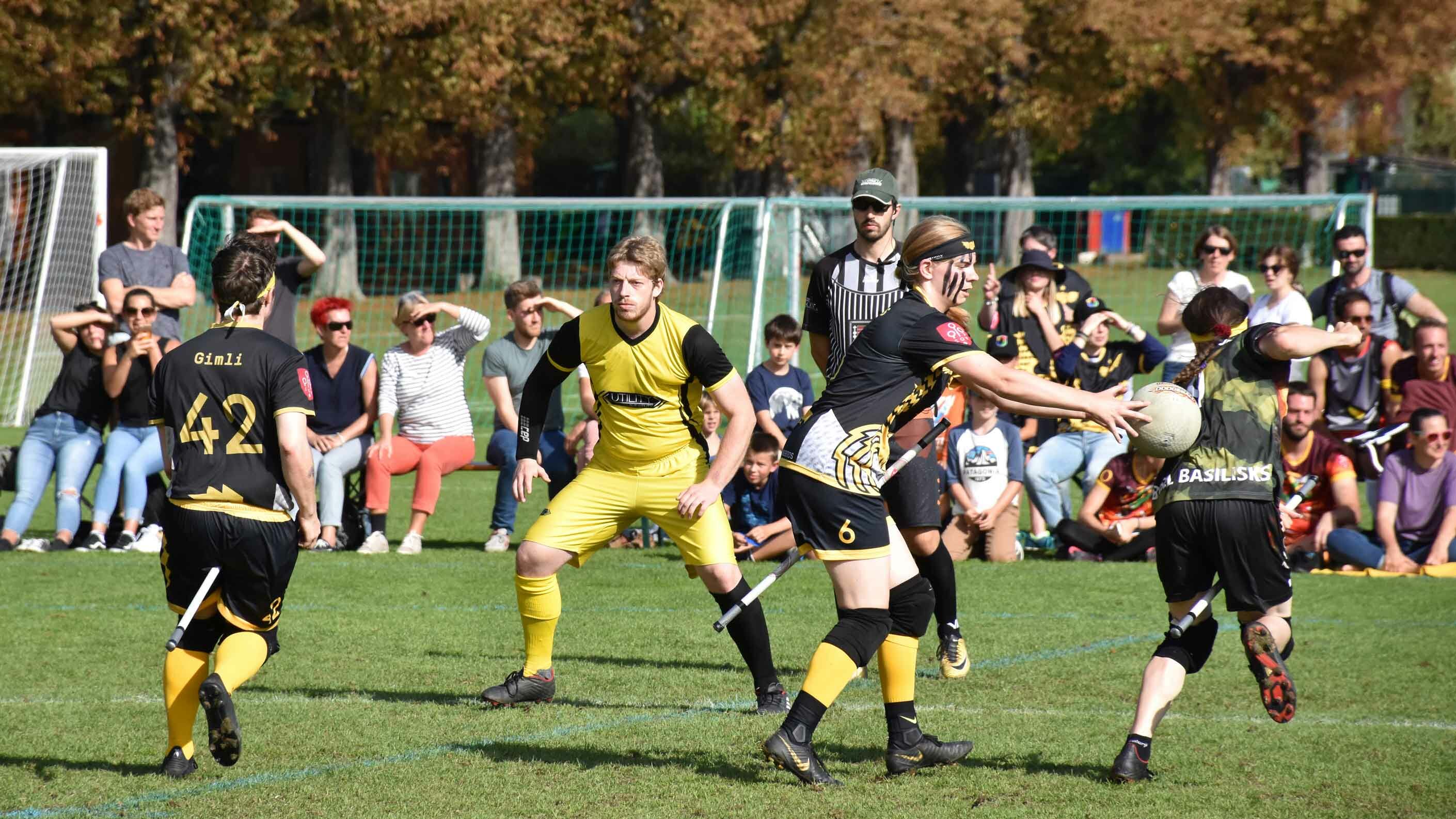 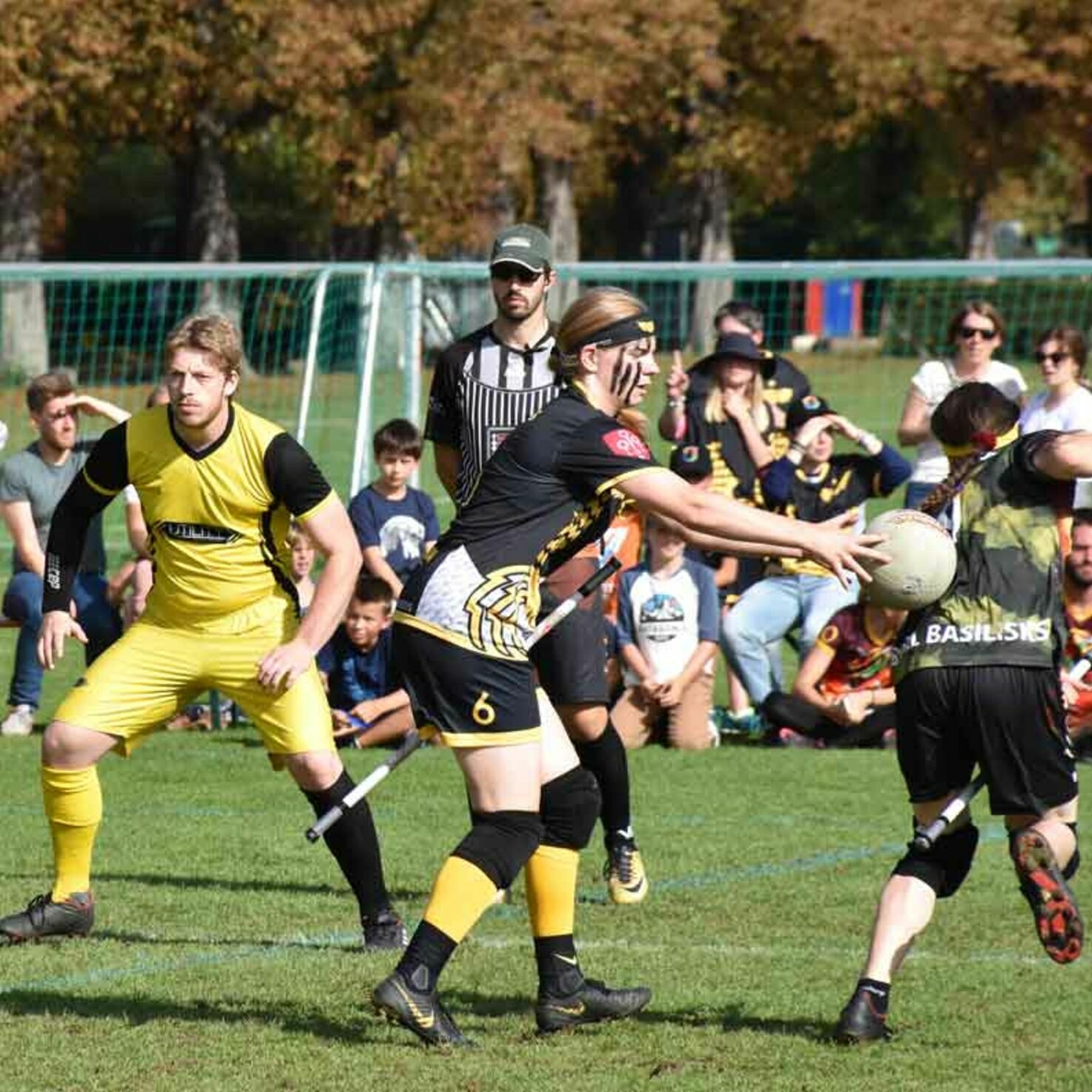 Quidditch: a fantasy sport finds its way into the real world

Originally, quidditch was a fictional sport in the popular Harry Potter books. In recent years, however, it has developed into a real-life, action-packed, mixed-gender, full-contact sport. The president of the Turicum Thunderbirds explains what this unusual sport is all about.

If you enter ‘quidditch match’ into YouTube, the first thing that comes up is a scene from Harry Potter. Pupils from the wizarding school fly through the air on their broomsticks while throwing and catching various balls and zooming through goal hoops. Harry Potter himself is in the position of the Seeker: his task is to find the Golden Snitch. This small, fast-moving ball with delicate wings appears only once in the game. It tries to evade every attempt to catch it. If it is caught, the game is over.

This action-packed clip has had four million views, but the quidditch videos that have been watched millions of times also include other recordings – matches played by people on the ground. These games also involve balls and broomsticks (for the past few years, plastic tubes) which they hold between their legs. The players’ positions are called the same as in the popular book series, and so are the balls. Last but not least, the real game likewise goes by the same name as its fictional precursor. For a few years now, quidditch has also existed outside the world of magic. One of its homes is in Zurich, where the Turicum Thunderbirds were established in 2015. The club trains twice a week and has already won the Swiss championship several times.

Basing a team sport on fantasy novels may seem at first glance like a crazy, nerdish idea – but it is one that is catching on. This magic sport has become real – the first match was in the USA in 2005. Since then, quidditch has developed into a full-contact sport. ‘It is actually a combination of dodgeball, handball and rugby,’ explains Jannis Grimm, president of the Turicum Thunderbirds. ‘In a similar way to handball, a team throws balls through the opposing team’s goal hoops. As in dodgeball, we can hit opposing players out. People can also be tackled to the ground in accordance with the rules.’ Quidditch players do all this while holding a metre-long plastic pole between their legs. This is an element derived from the flying broomstick in the books, and it also requires dexterity in this updated version. ‘Just as in football you can use only your feet, we have the brooms that mean you have only one hand free when you are running. Only when you are slow enough to wedge the broomstick between your legs can you then use both hands – to catch the ball, for example,’ Jannis explains.

‘Gender inclusivity is an important value in quidditch.’

There are seven quidditch teams in Switzerland, plus Zurich’s ‘Kidditch’ – a youth team for players aged under 16. The Turicum Thunderbirds are open to all ages from 16 upwards. Jannis explains one more thing that distinguishes the team even more clearly from other sports: ‘Gender inclusivity is an important value in this sport.’ For this reason, quidditch has a gender rule: in any match, a maximum of four out of the seven players may belong to the same gender. While many sports, from amateur to professional level, struggle with trans identities and people who are intersex, quidditch regulates this matter very simply: what matters is not official documents or external definitions but simply the identity of the person playing. This means that non-binary people, for example, can also be integrated into this team sport.

Quidditch recognizes four player positions: chasers, keepers, beaters and seekers. Like these positions, the balls too are named after their literary models: in addition to the snitch mentioned earlier, there are bludgers, to disrupt other players’ flow, and quaffles (in the form of volleyballs), with which points are scored. ‘There are now more differences than similarities between present-day quidditch and the version in the book,’ Jannis explains. ‘Accordingly, you don’t have to be a Harry Potter fan to play quidditch.’ In addition, he says, it is about much more than sport. ‘With quidditch, the community is really great, both nationally and internationally,’ he explains. ‘Every person is accepted, and even the bitterest opponents during a game are friends again afterwards.’ People enjoy meeting up away from training sessions and matches – although this doesn’t mean that they don’t also have good reason to train hard. Every year, as long as the pandemic doesn’t thwart their plans, the Swiss quidditch championships are held, and the Turicum Thunderbirds have come up several times in the final there against the Basel Basilisks.

Whoever catches the snitch is the winner.

And what about the winged snitch which, in the Harry Potter books, is so magical that it tries to evade every player? In real-life quidditch, the snitch is a tennis ball attached to one person. They defend this important ball, either by nimbly fleeing from the players or by strongly and powerfully preventing the players from reaching the snitch. When somebody catches the snitch, the game is over – just like in the book.