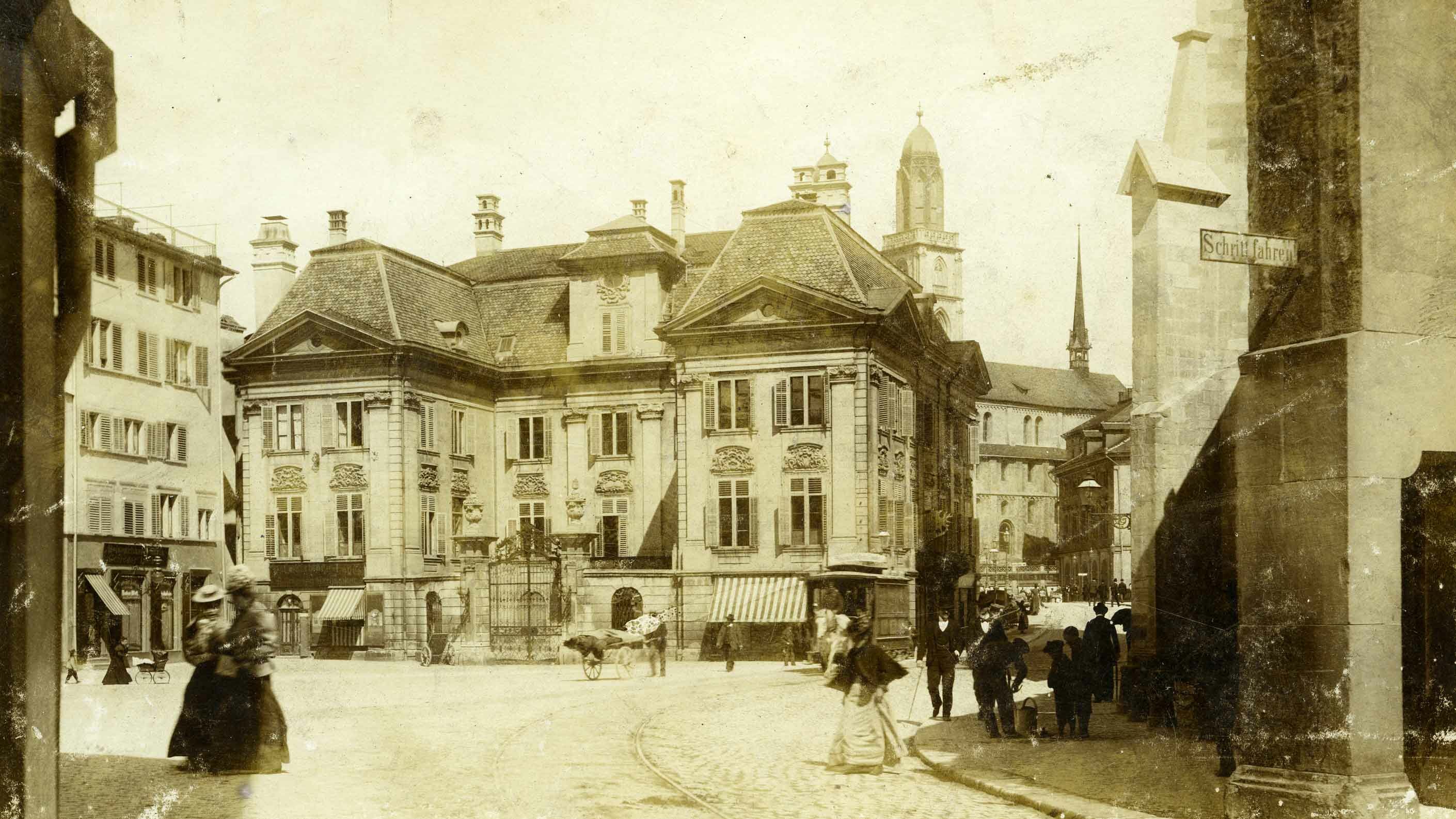 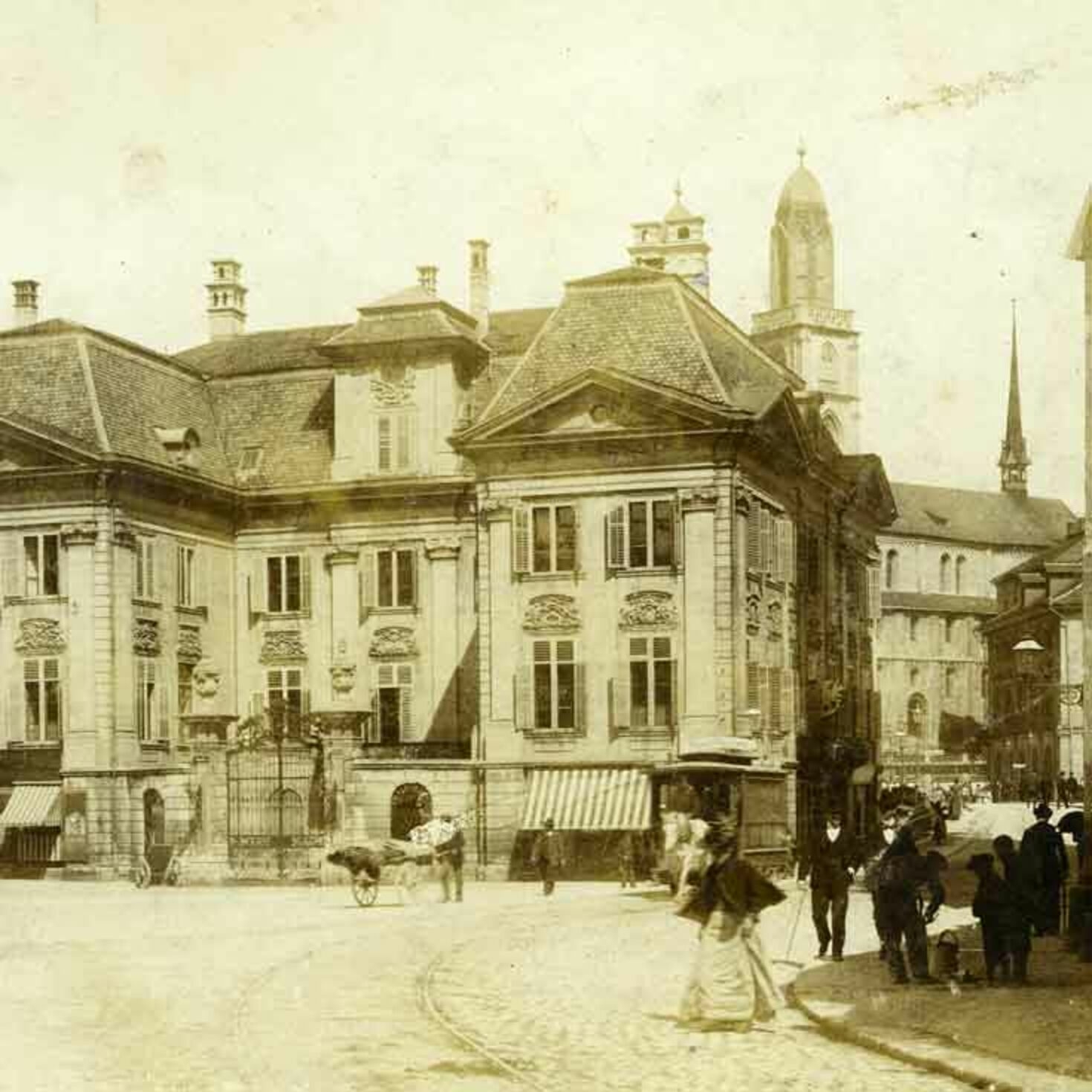 Anyone enjoying a stroll across the Münsterhof square today and making the most of the sunshine will often be unaware of its turbulent past – dozens of Zurich residents lost their lives here. We take a look back at the history of Münsterhof, from the ‘night of murder’, to an attempted putsch and the disastrous installation of a rococo fountain.

Today, Zurich residents come to Münsterhof to relax in one of the many cafés and restaurants. But up until the Early Middle Ages, it was a stinking swamp, and it was only over the course of the 9th century that the area was gradually raised and drained. And because the Fraumünster abbey had been built there in 853 AD, over time the square acquired a new name and a new function: part of Münsterhof began to serve as a cemetery for residents of Zurich.

Münsterhof finally made its way into the Zurich history books in 1350 when, on the night of 23 February and into the following day, fierce street fighting raged in the square. These battles were so violent that the night is known today as Mordnacht, or ‘night of murder’. It was the peak of a war-like conflict that had already been going on for 15 years.

50 men died here during the Mordnacht.

Fighting on one side of the feud were the former Zurich council members who had been banned from the city on the Limmat. They were supported by the nearby town of Rapperswil, which had granted them exile and at the time was ruled by the Habsburg Monarchy. Their opponents were the city of Zurich and several unified aristocratic families. Legend has it that 50 men lost their lives during the Mordnacht, and many others were captured and executed over the days that followed. There were also similar conflicts in other Swiss cities.

Following the reformation in the middle of the 16th century and the abolition of monastic power, Fraumünster, and therefore also Münsterhof, lost its meaning and its shine. For a time, the square was home to a cattle and pig market, and grocers and traders sold their wares along the walls of Fraumünster. Münsterhof fell into decline.

The square was paved and upgraded for the first time during the 18th century. In 1766, a fountain was built on Münsterhof – a magnificent and fiendishly expensive fountain that boasted a colourful underwater community of fish and many intricate water features, and was crowned by Neptune, God of the sea.

The expensive fountain was ridiculed.

The problem was that the pressure in the water pipes coming from Uetliberg was too low, so the expensive fountain was getting too little water. Following the structural fiasco, German poet Christof Martin Wieland wrote mockingly: ‘When everything was complete, I found that there was barely enough water to wet the nose of a single dolphin, and when the installation is set to work, it looks like nothing more than a group of seahorses and dolphins with a runny nose.’

The disappointing fountain was therefore torn down in 1811, but it’s interesting to know that three of the four water basins from the original ostentatious rococo fountain are still in use today – they now form part of the fountain on Stüssihofstatt in the Niederdorf district.

A tram line ran through Münsterhof.

A further historic event occurred in Münsterhof in 1839: the Züriputsch, where the fighting between the dissatisfied rural population and government troops came to a head. In total, at least 14 rebels lost their lives during the revolt in Münsterhof. 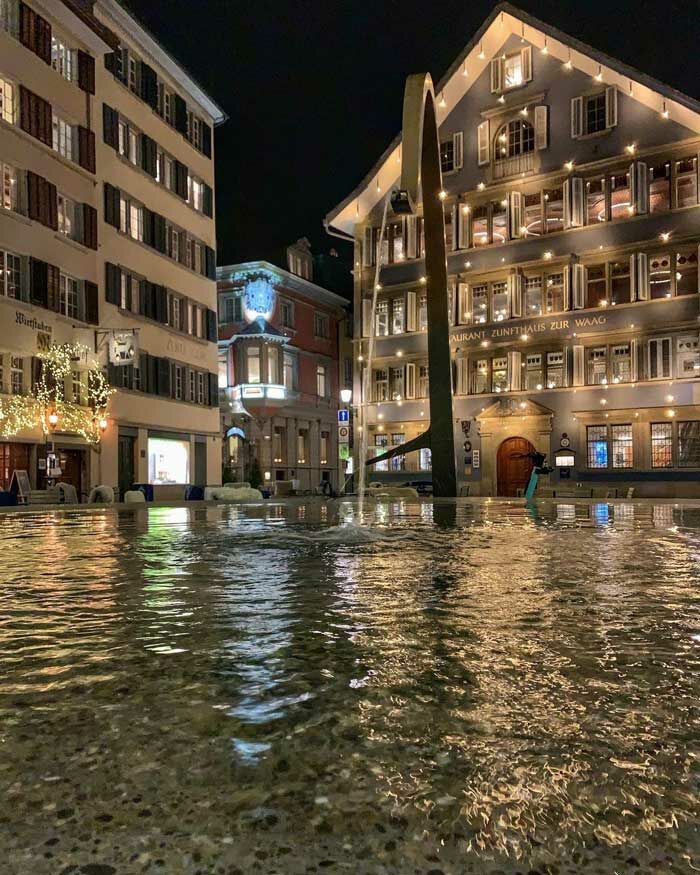 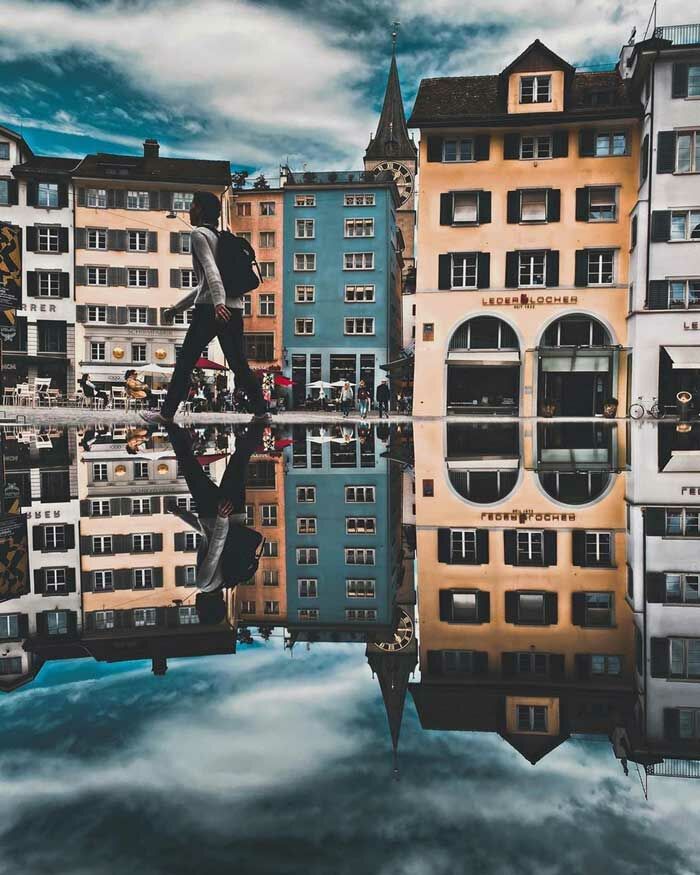 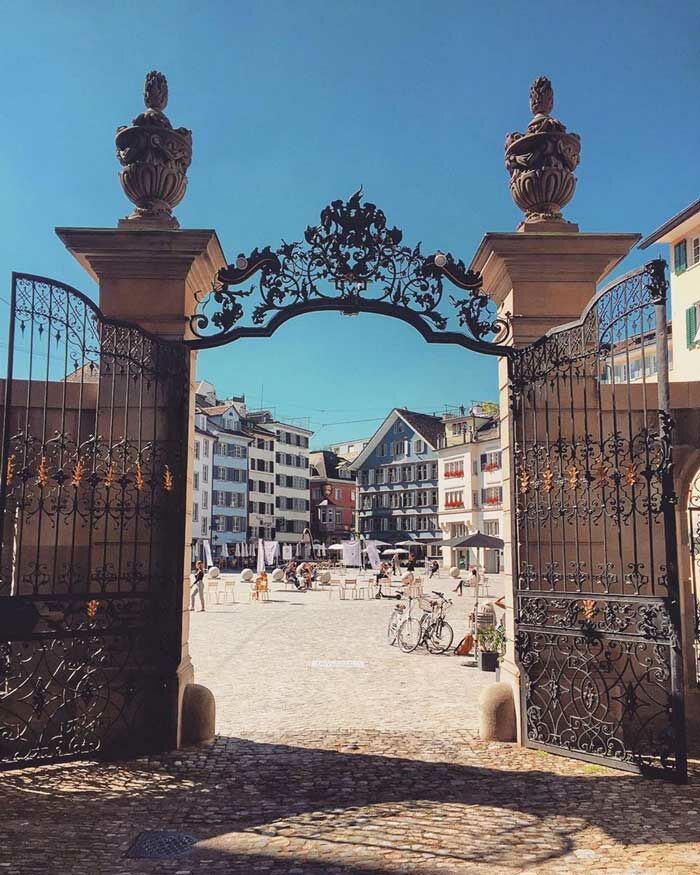 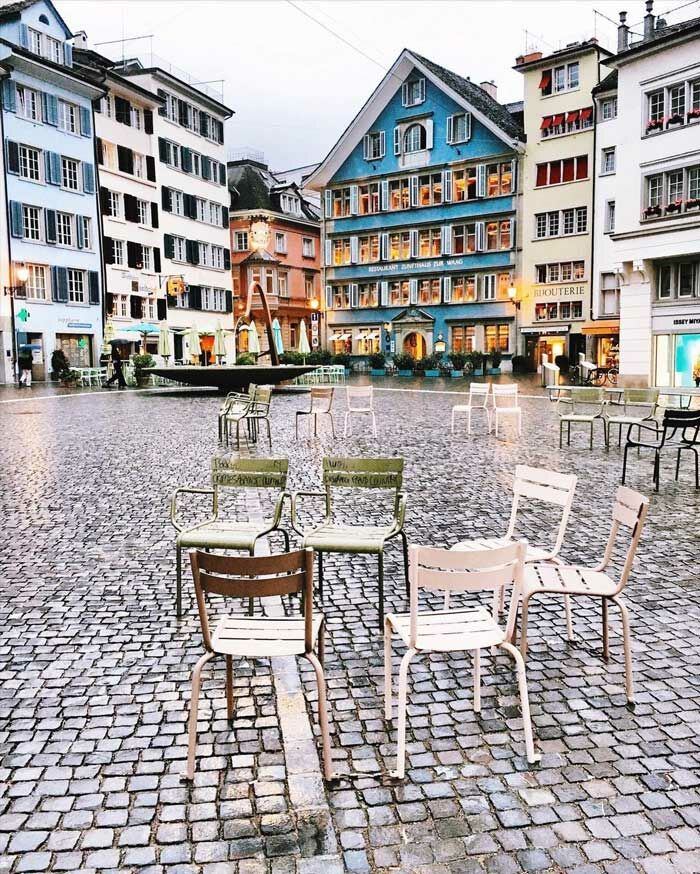 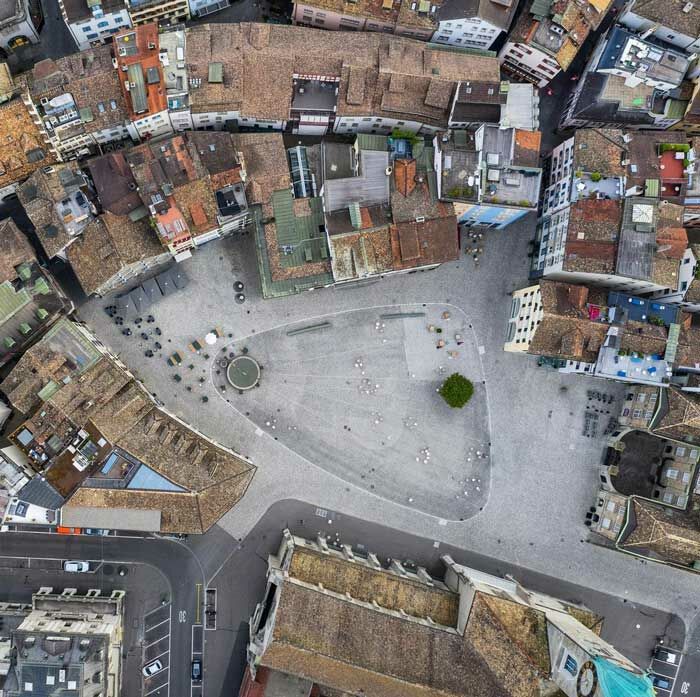 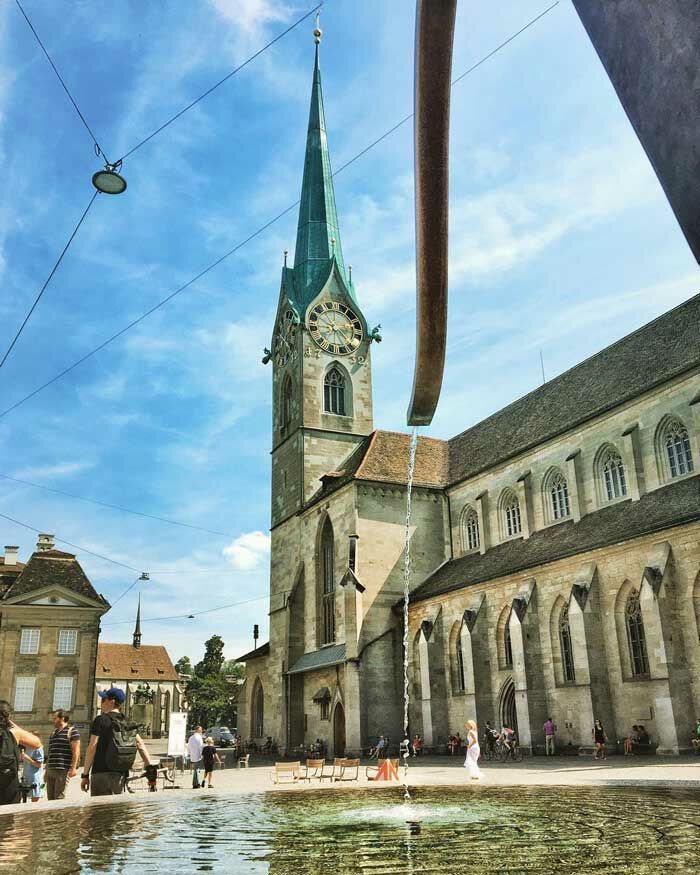 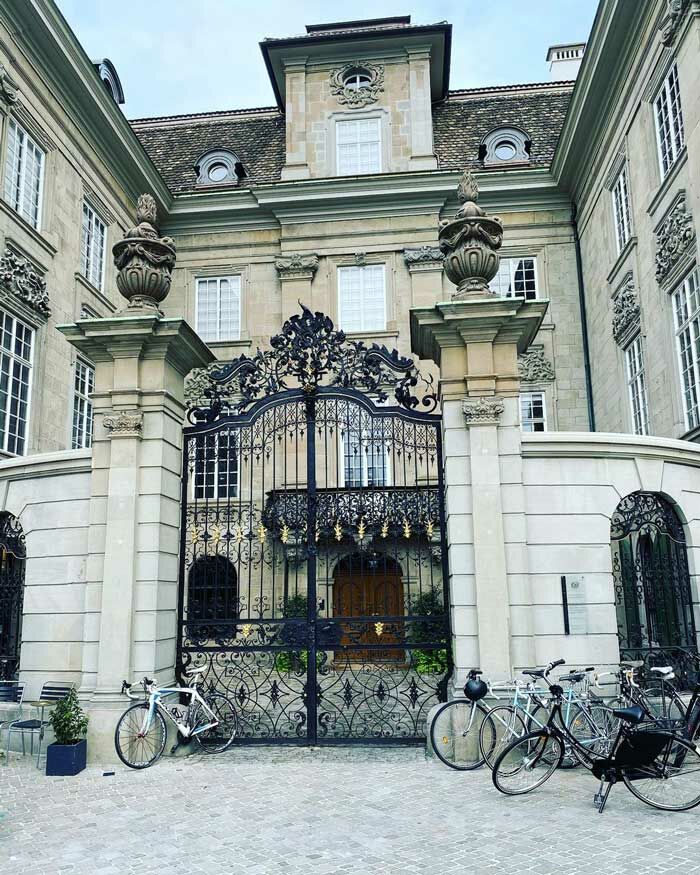 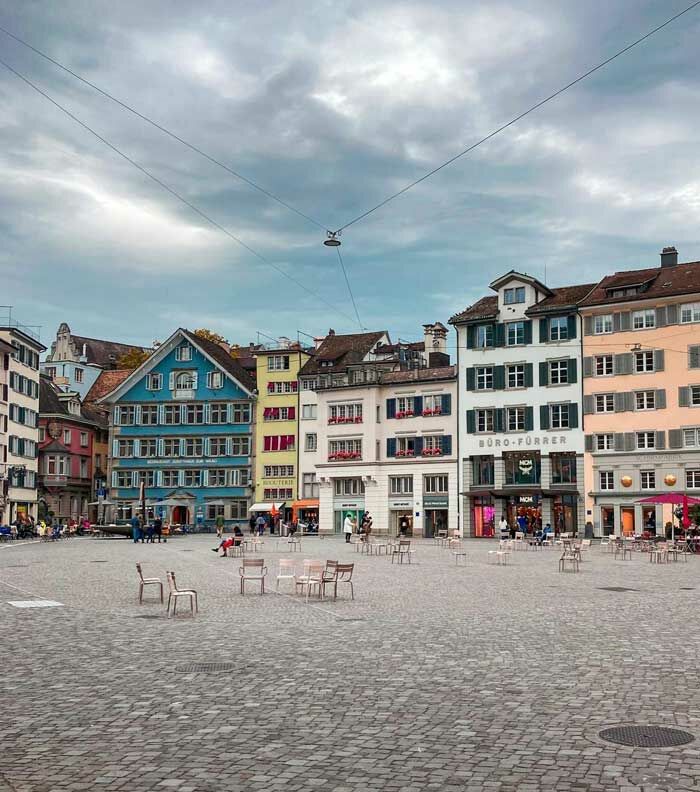 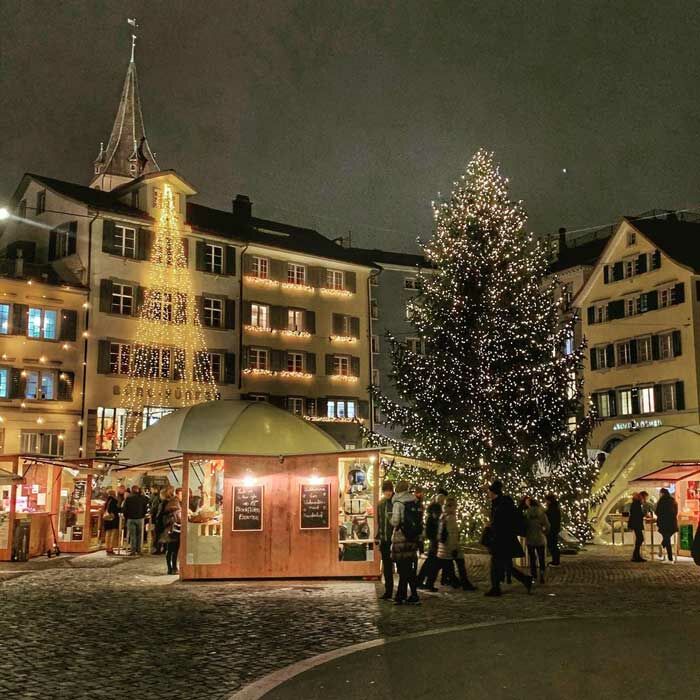 In the 19th century, the city authorities then decided that Münsterhof should be turned into an important transport intersection in Zurich. To do this, the Friedhof wall, which had been standing since the 13th century and had been home to the market stalls, was taken down. What very few people know today is that in 1900, there was even a tram for a brief time – still drawn by horses – that travelled between Paradeplatz and Münsterhof, past Fraumünster and across the Münsterbrücke bridge. The beginning of the 20th century saw the first cars using this route.

A short time later, the city authorities decided to relocate the tram line across Münsterhof, and it was replaced with a newly opened line across Quaibrücke. Münsterhof effectively became a noisy car park.

However, because this annoyed residents more and more, the decision was taken to redevelop Münsterhof in order to free it of cars and noise and turn it into a lively city square. Since April 2016, the square has had new paving and is now a peaceful pedestrianised area. And there is also a fountain again in Münsterhof. Unlike its predecessor, the new fountain is sleek and in no way ostentatious. Also unlike its predecessor, it now gets sufficient water.

But that’s not all. In addition to the large main basins of the new fountain, there is also another small basin where the designers of the fountain installed a device that doesn’t just pour out water, but other drinks as well: every year during the Sechseläuten spring holiday, the fountain also produces white wine.