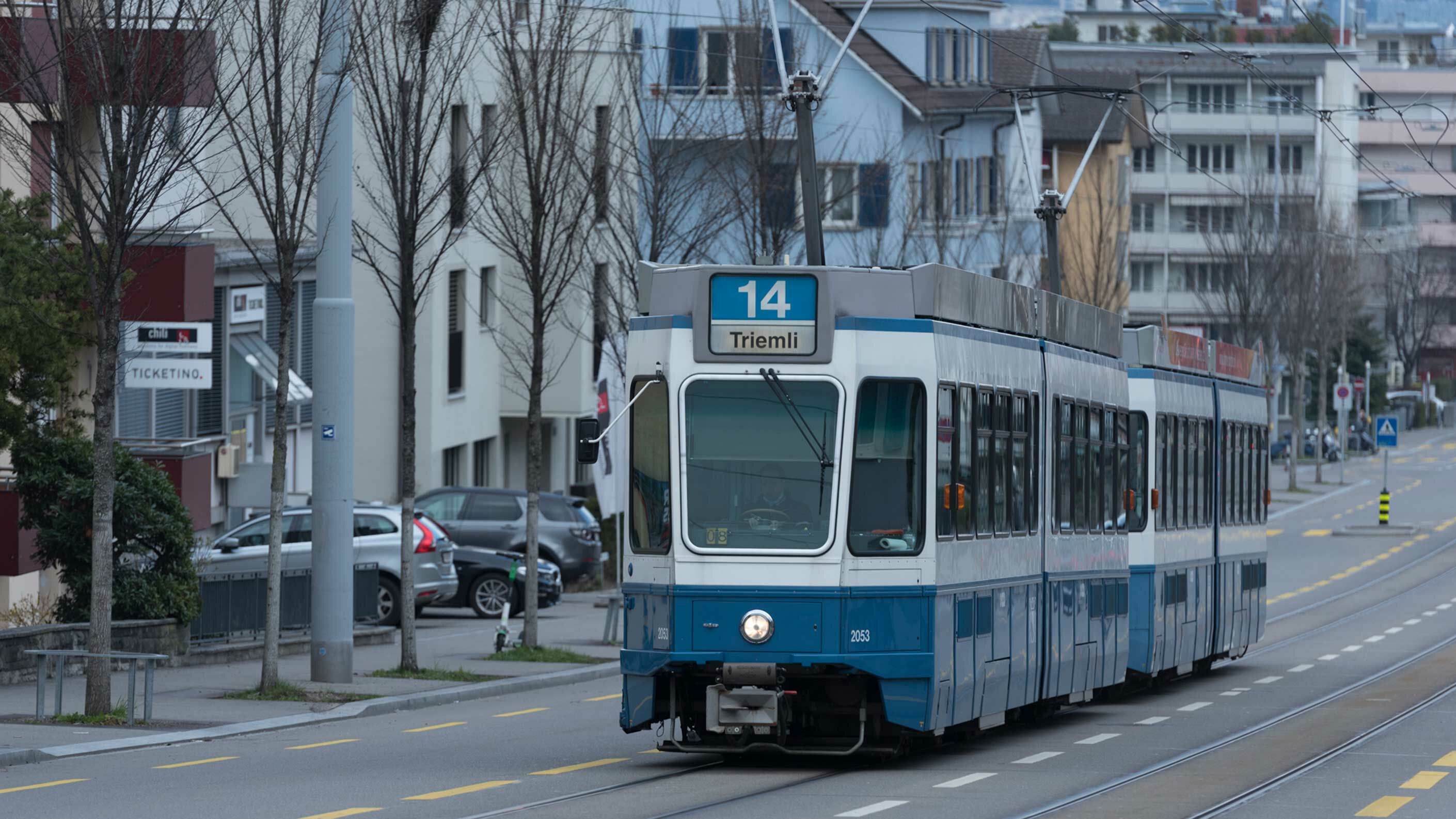 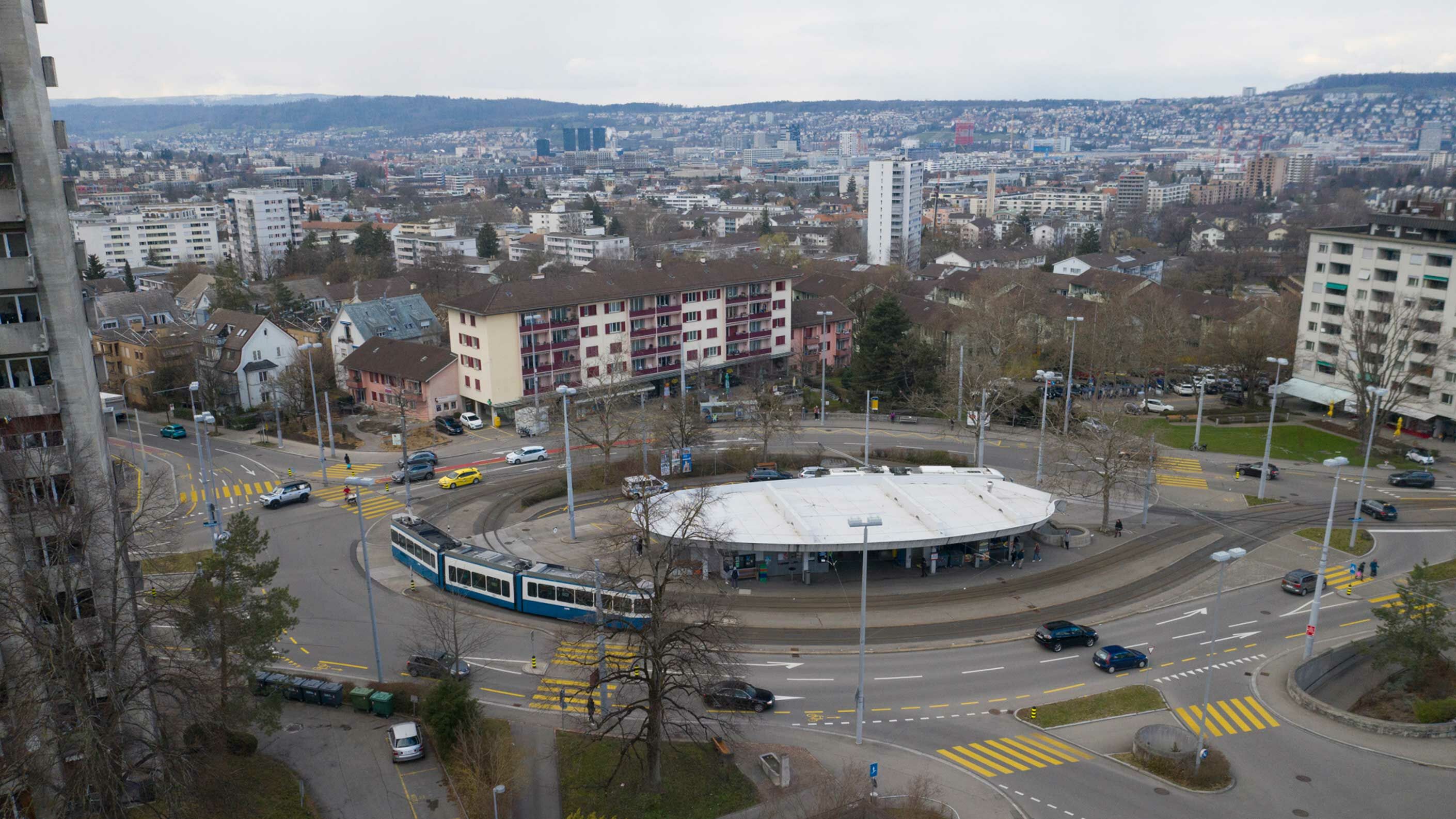 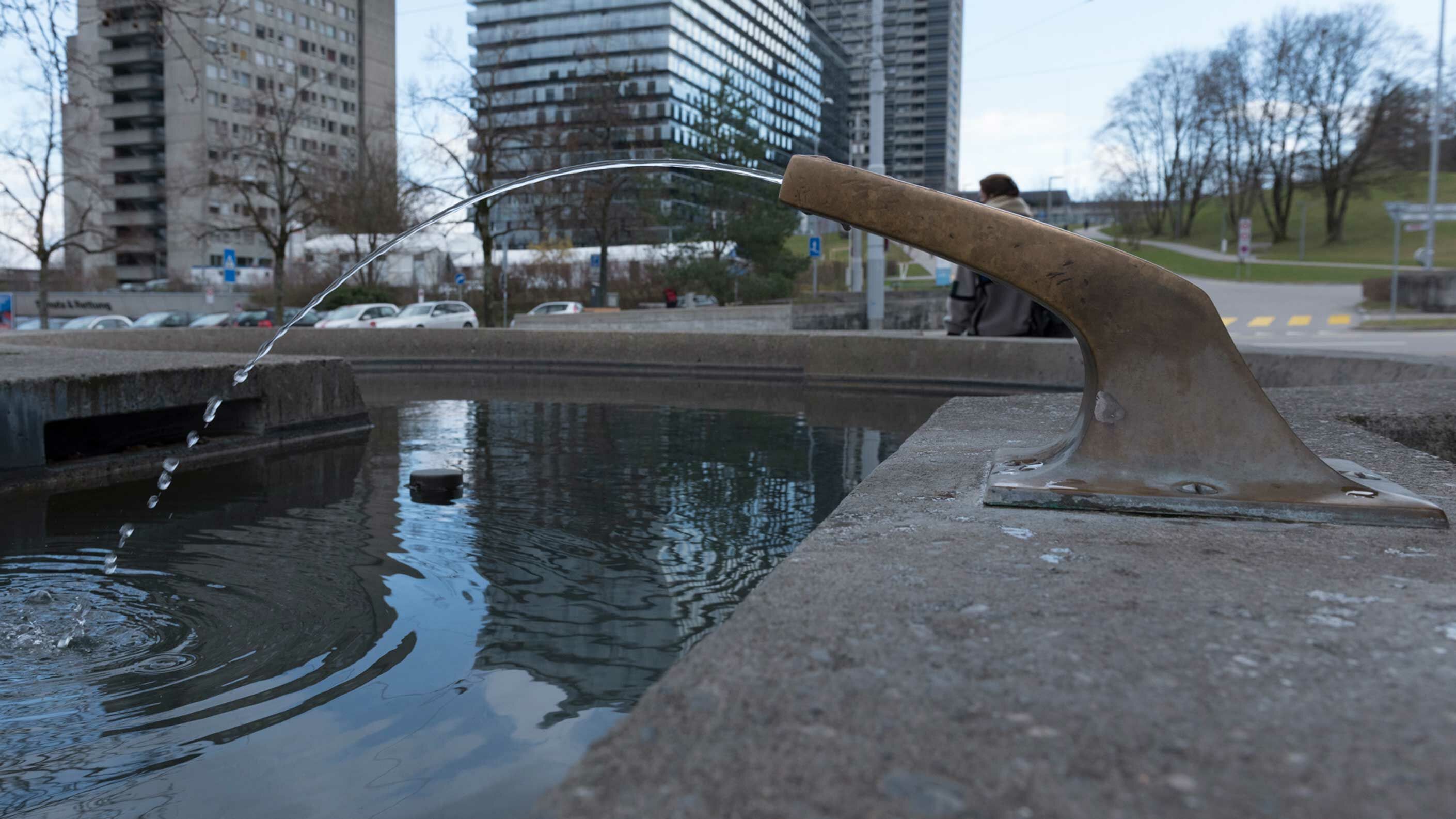 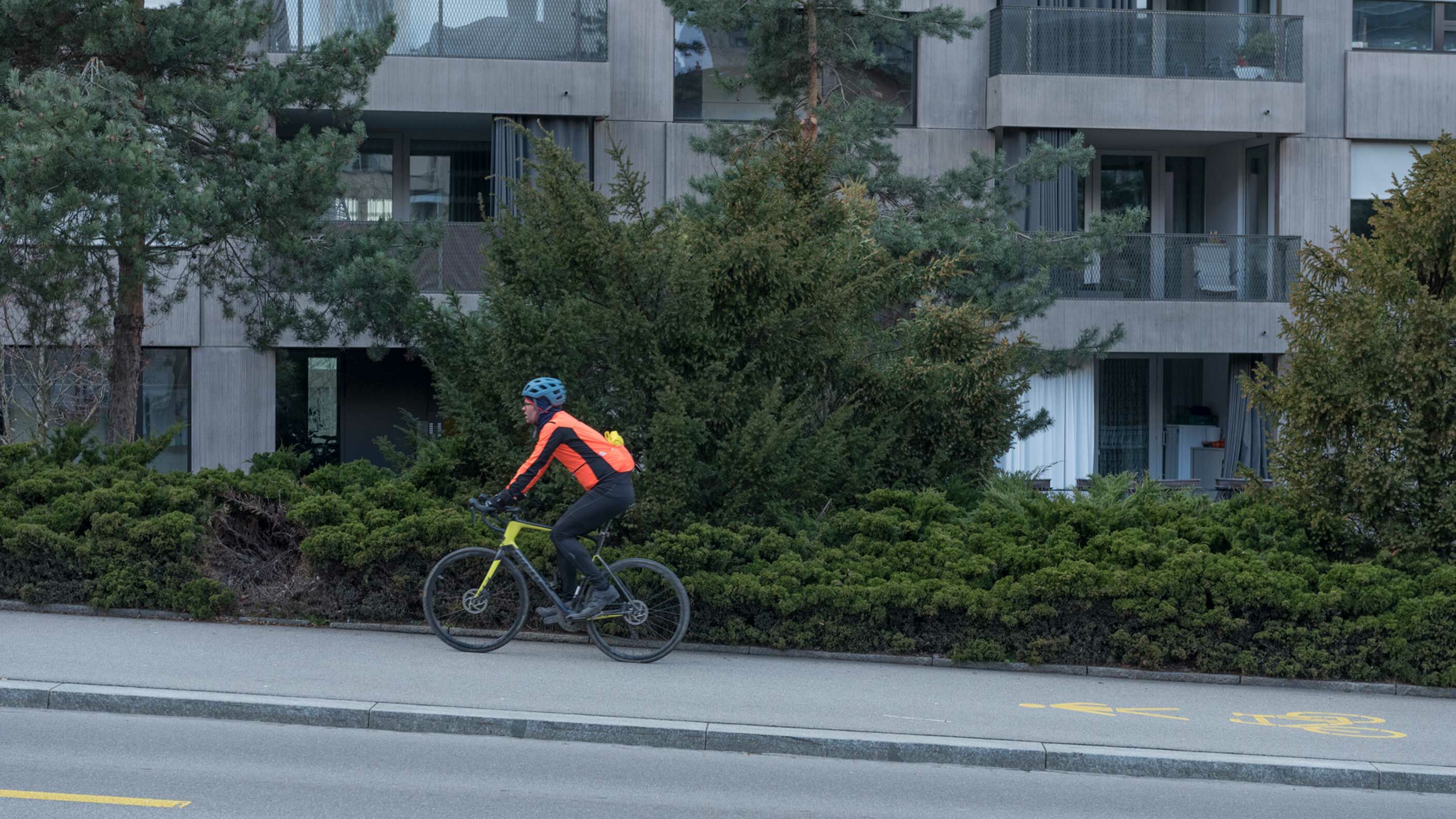 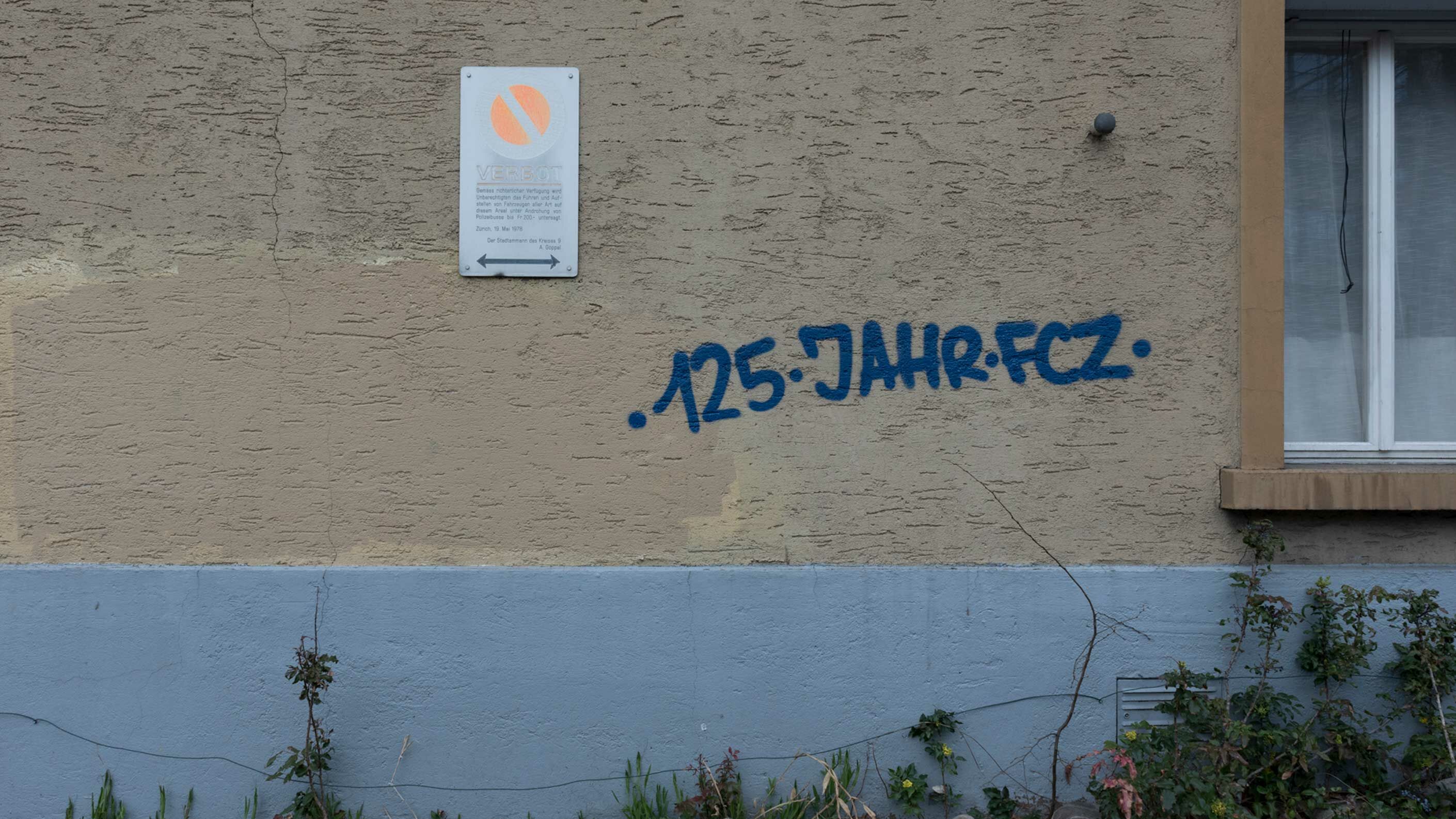 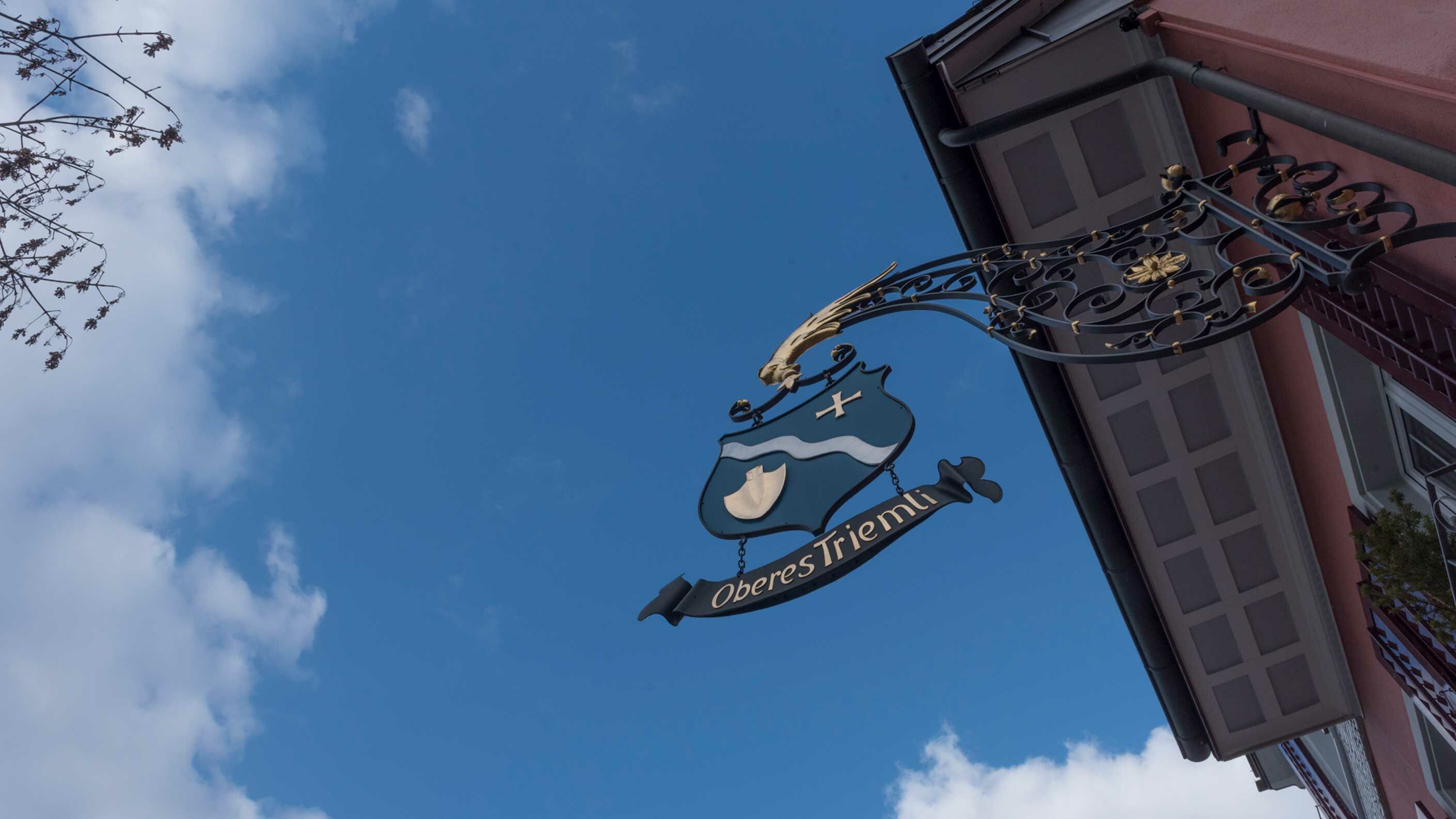 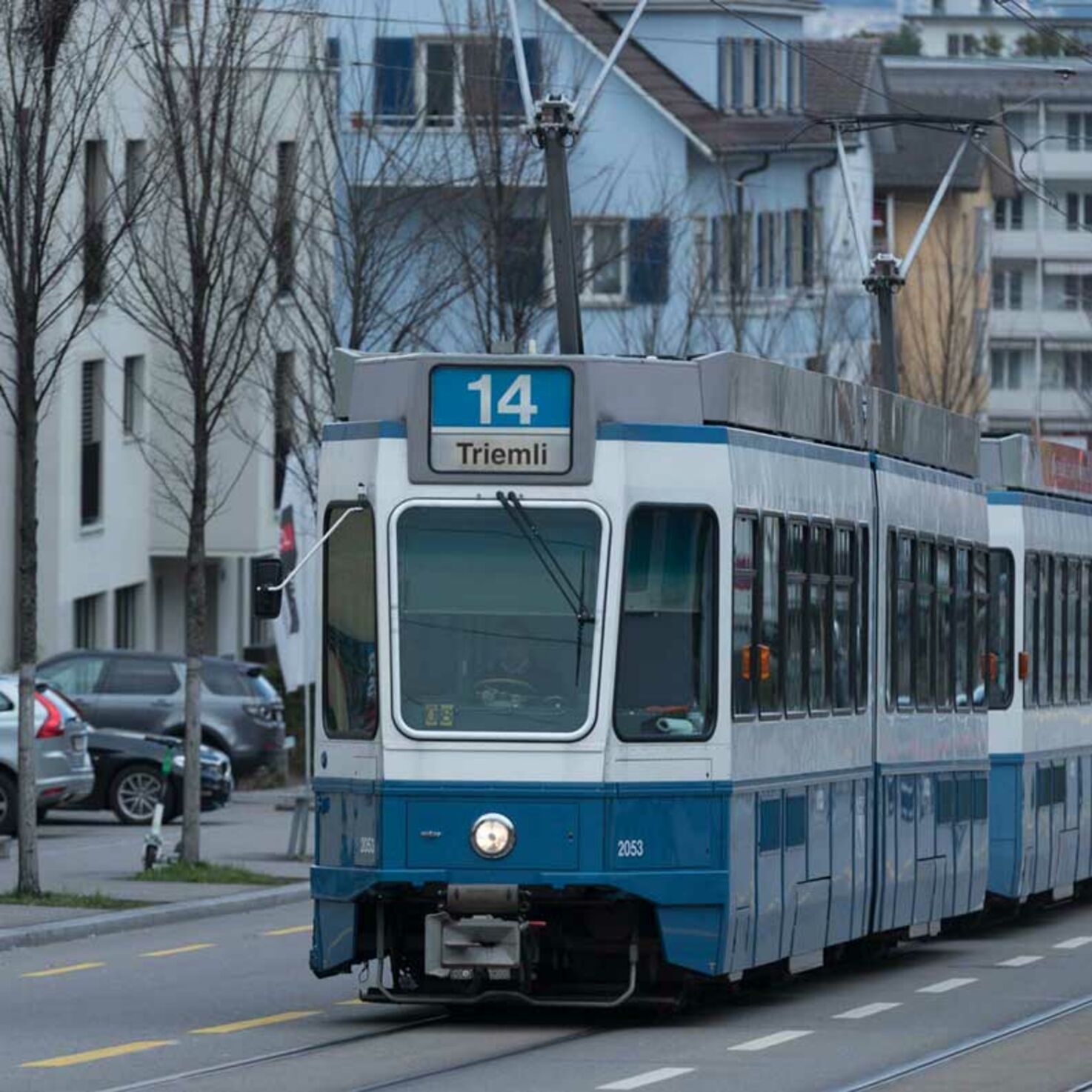 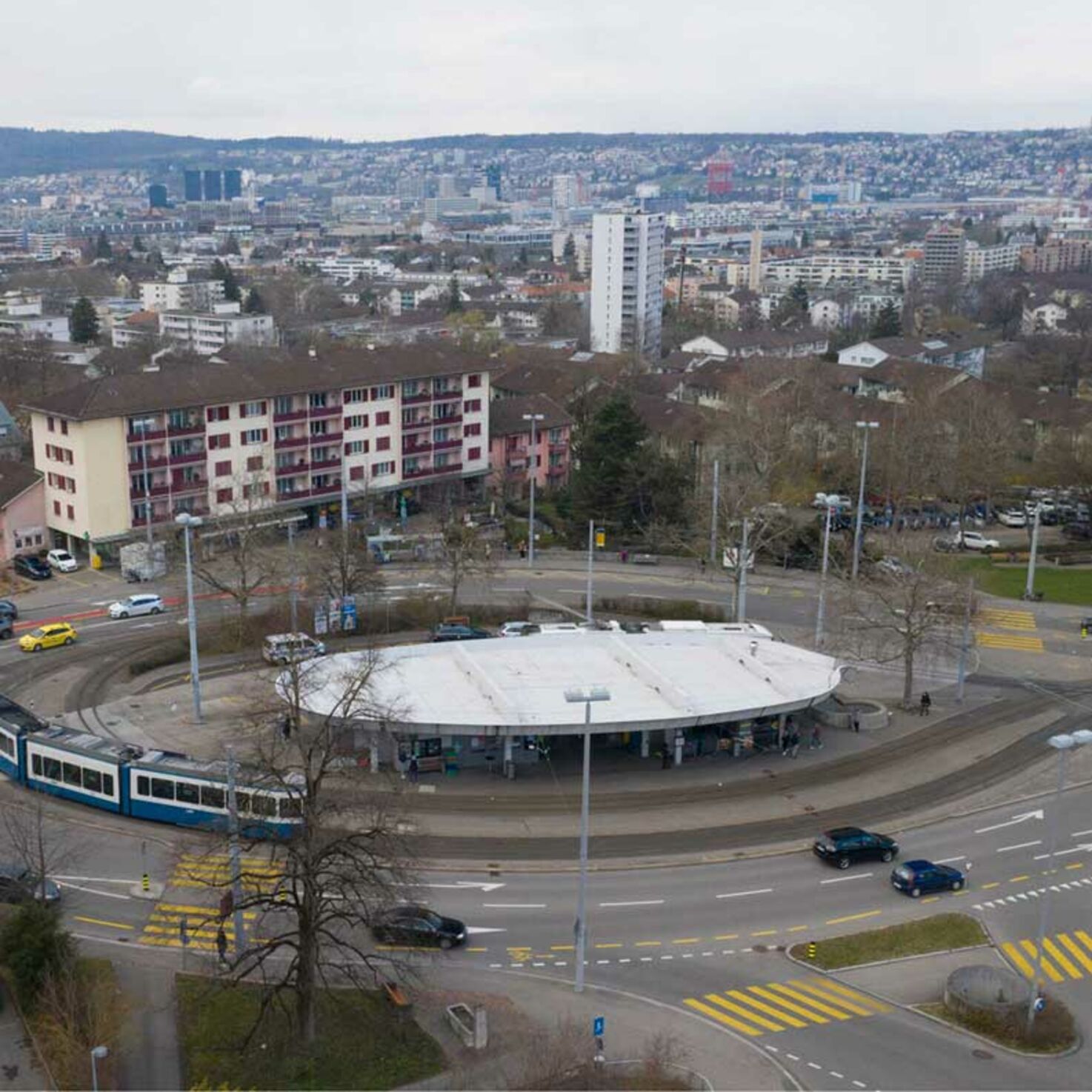 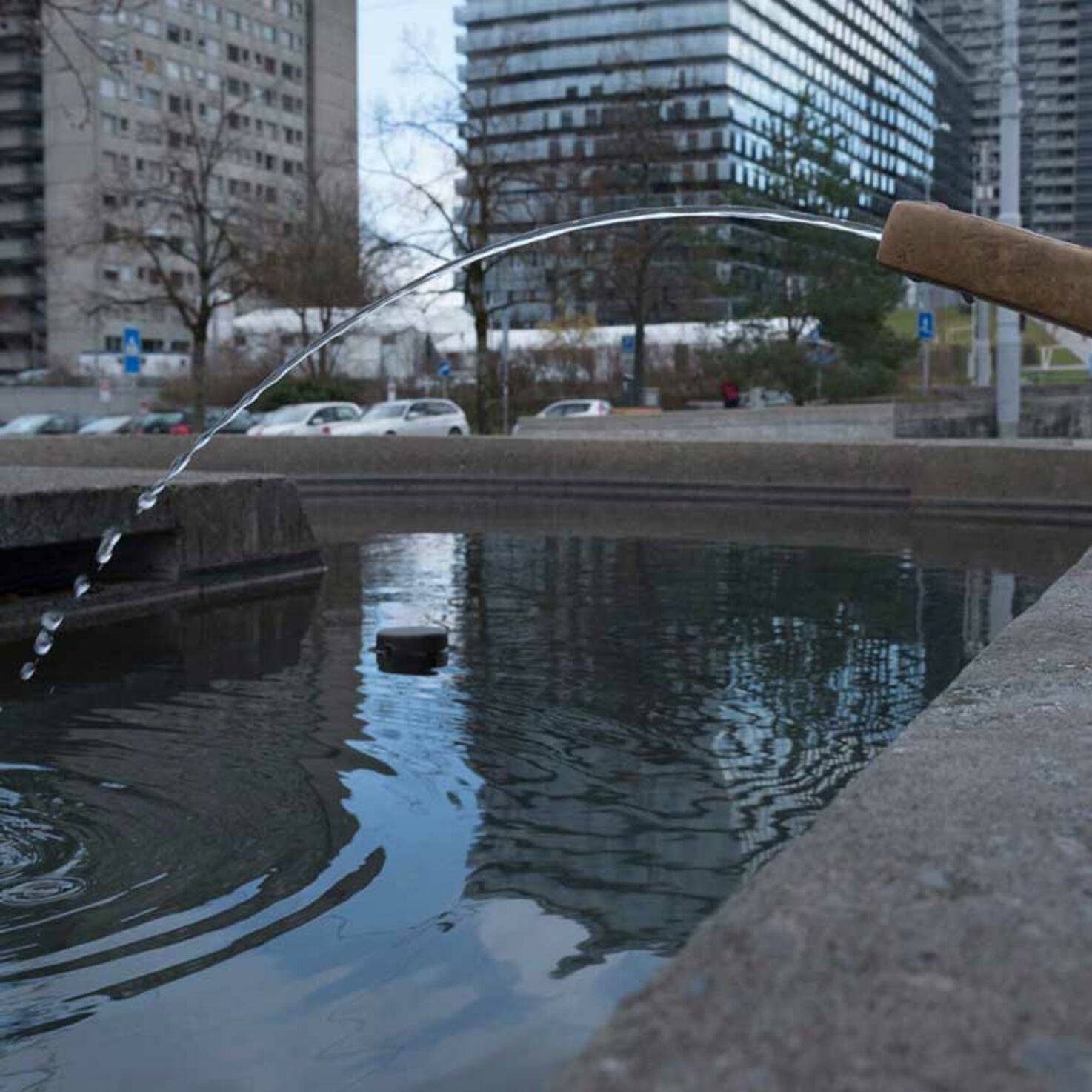 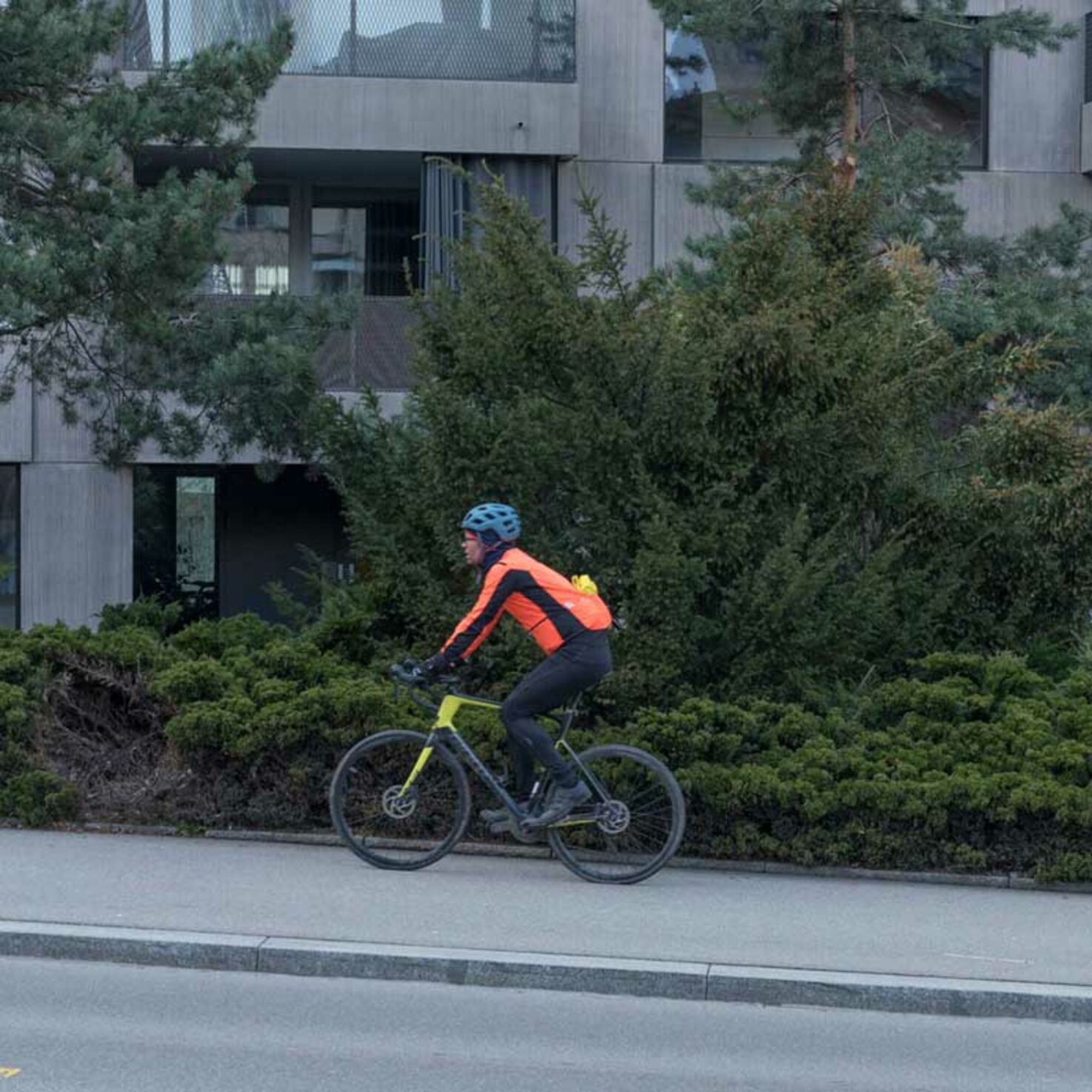 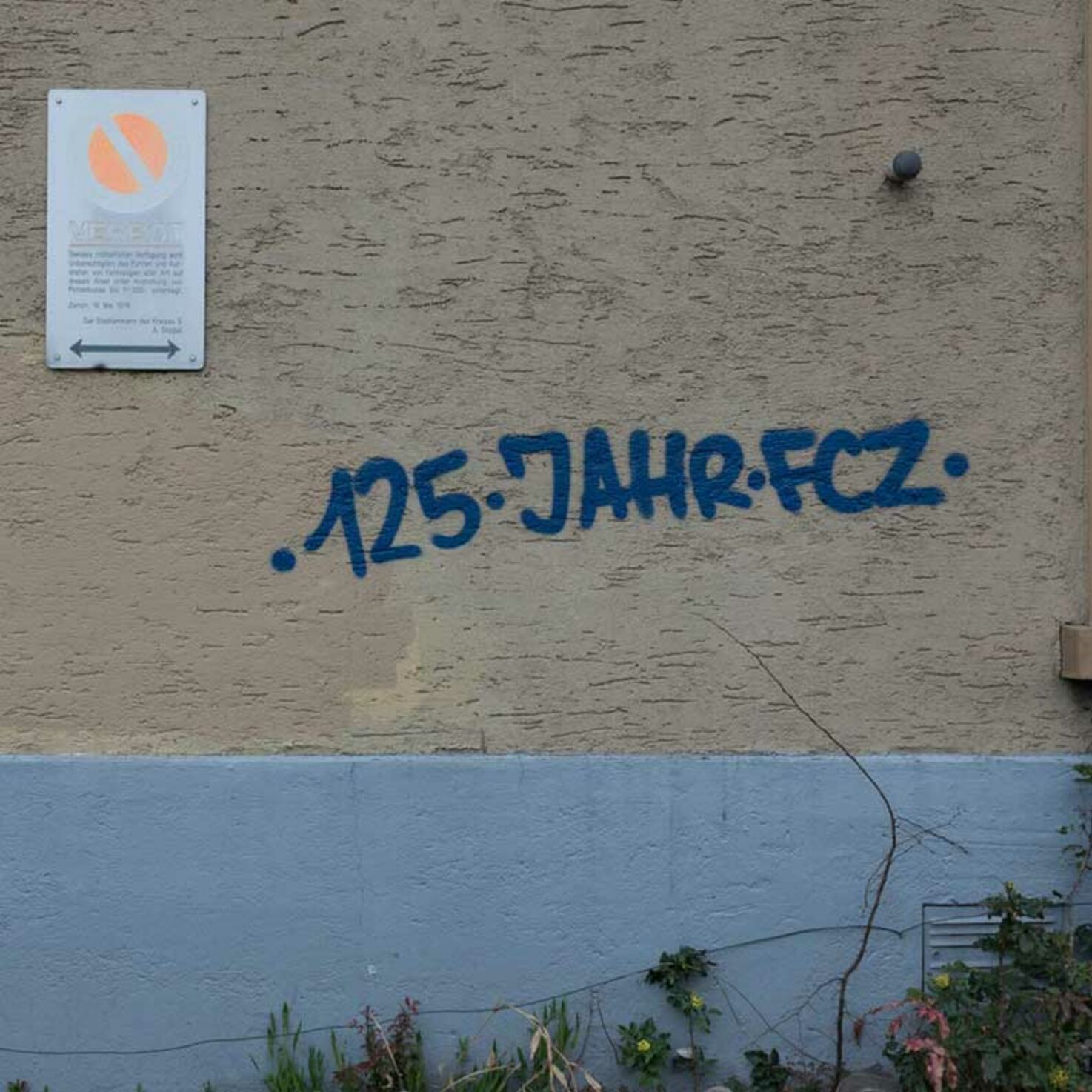 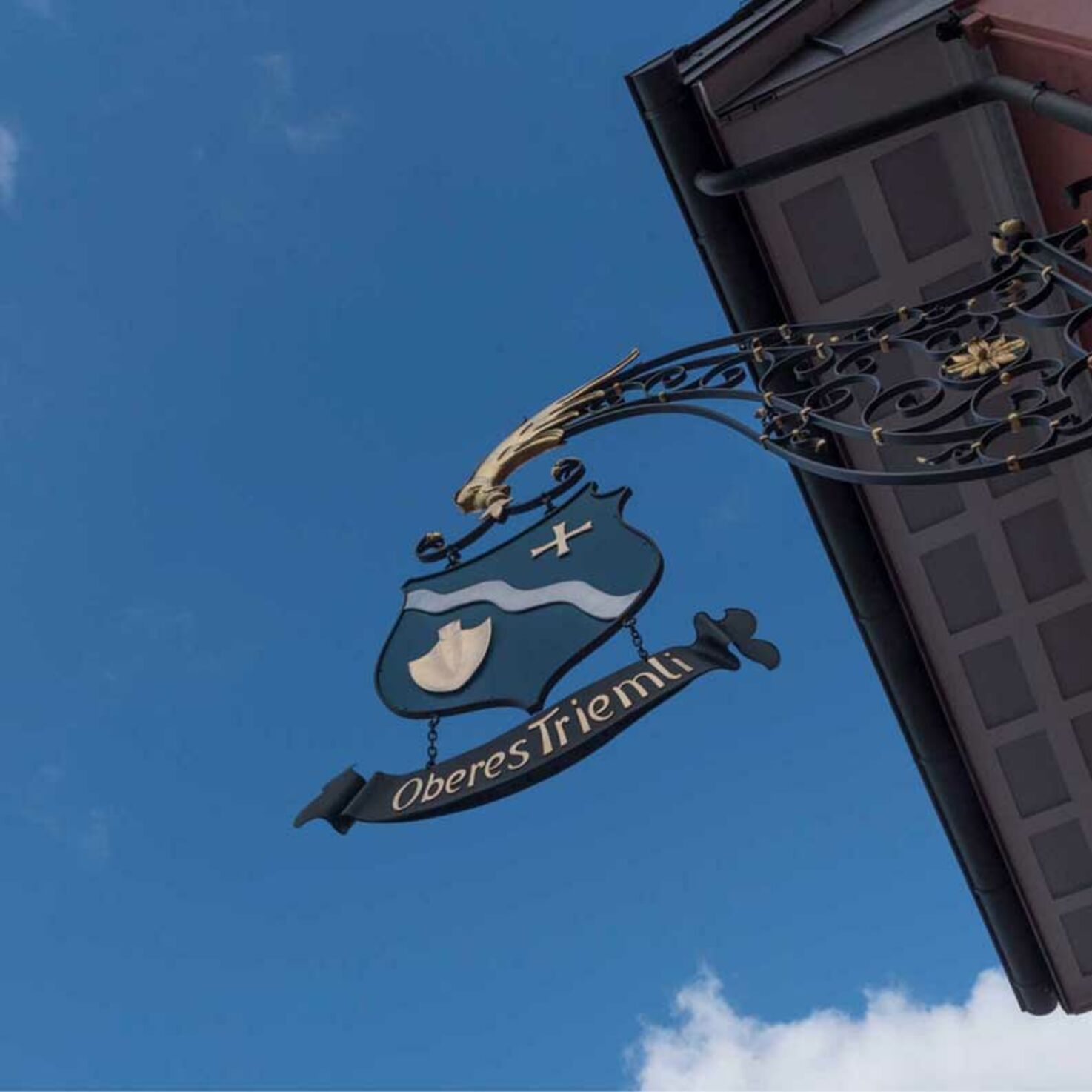 At Triemli terminus, the hospital and other buildings tower up mightily into the sky, but even in this part of Zurich’s outskirts you can find traces of a rural past if you take a closer look.

In a place where buildings rise up to a great height, you do not focus immediately on what is below the ground. At Triemli terminus, however, you can not only look upwards but also direct your steps downwards. The reason is that below Triemli – the terminus, a turning loop with a kiosk, a kebab stall and a tram platform in the middle – there is a pedestrian passageway that leads from one side of the square to the other.

It is fleetingly reminiscent of the first level of a large city’s underground railway network, but it is almost something like the opposite of that. To reach the public transport system, you immediately have to go back up one floor.

You are expected to go underground through this showcase for public transport, ironically, because it is private vehicles that are in charge to a certain extent. While the trams turn around, motorists drive past here on their way to and from Birmensdorf. They go around the tram island on one side or the other, depending on their direction of travel.

You have to be impervious to noise to live here.

However, driving is certainly not the only thing that happens around Triemli terminus, as people live here too. How pleasant you find that experience depends on how good you are at tolerating the wailing of sirens.

This is because it can often happen that an ambulance with a blue light and siren will be on the move in the vicinity of the city hospital, which was built in 1970. Consequently, the health service will be clearly audible and visible. But this is a case of first-world problems: after all, the Triemli area with those umpteen floors in its hospital is a place where you will receive medical care that literally stands out.

If you take a closer look around the area, you will find not just that variety of large buildings but also traces of a rural past. No more than a few steps from the terminus, Triemlihalde street with its small houses presents a convincingly historical and rural image, and a chalet at the foot of the Uetliberg even gives off an air of the Hasliberg area.

Any remaining doubts are dispelled by an aerial photograph from the 1930s. At that time, the place where trams now turn was still occupied by a few farm buildings standing close together, with a sea of fruit trees all around.

The common name Triemli seems to be really old. Just as viruses can change as they spread, the name of this district has undergone a few mutations as it has been passed on orally and with the passage of the centuries. Trüembach became Trüebenbach, which then turned into Trimbach, Trüemli and Trüemlibach before ending up as the present-day Triemli.

The supposition that there was a ‘trüber Bach’ (‘muddy stream’) is more likely to be a case of popular etymology. One plausible explanation, according to experts in common names, is that the stream got its name from the surrounding farmland – which, for its part, is known to have been identified as Trüebli. It may have been owned by somebody called Trüeb or Trüb.

A well right beside the terminus displays the year 1941. When that came into being, the tram line to Triemli had already been in existence for 15 years: in 1926 the Zurich municipal tram company (Städtische Strassenbahn Zürich) had extended an existing tram line from the Heuried to today’s terminus.

Skittles and golf used to be played in this restaurant.

The present-day restaurant Oberes Triemli is about twice as old. This inn with its tiled stove is believed to have remained largely unchanged since it first opened. The owner at that time, Jakob Hofstetter, had it built in 1859 as an ensemble comprising a private house with an inn, a barn and a stable. A butcher’s shop and apartments were added in 1946. So too were a minigolf course, a skittle alley, a self-service buffet for the beer garden and garages, according to the website of this establishment, which is still in business today. The restaurant acquired its present form in 1984, when the skittle alley and minigolf course were removed.

By that time, Triemli terminus had already gained its present shape. The stop with the pedestrian passageway had been built in the 1950s and 1960s. Today, it would be easy to overlook the ramps that lead pedestrians down to the underpass. At any rate, the pedestrian tunnel running under the Triemli stop looks a little neglected on a weekday afternoon. Besides, the various pedestrian crossings that enable you to cross the square at least just as easily are also rather convenient.