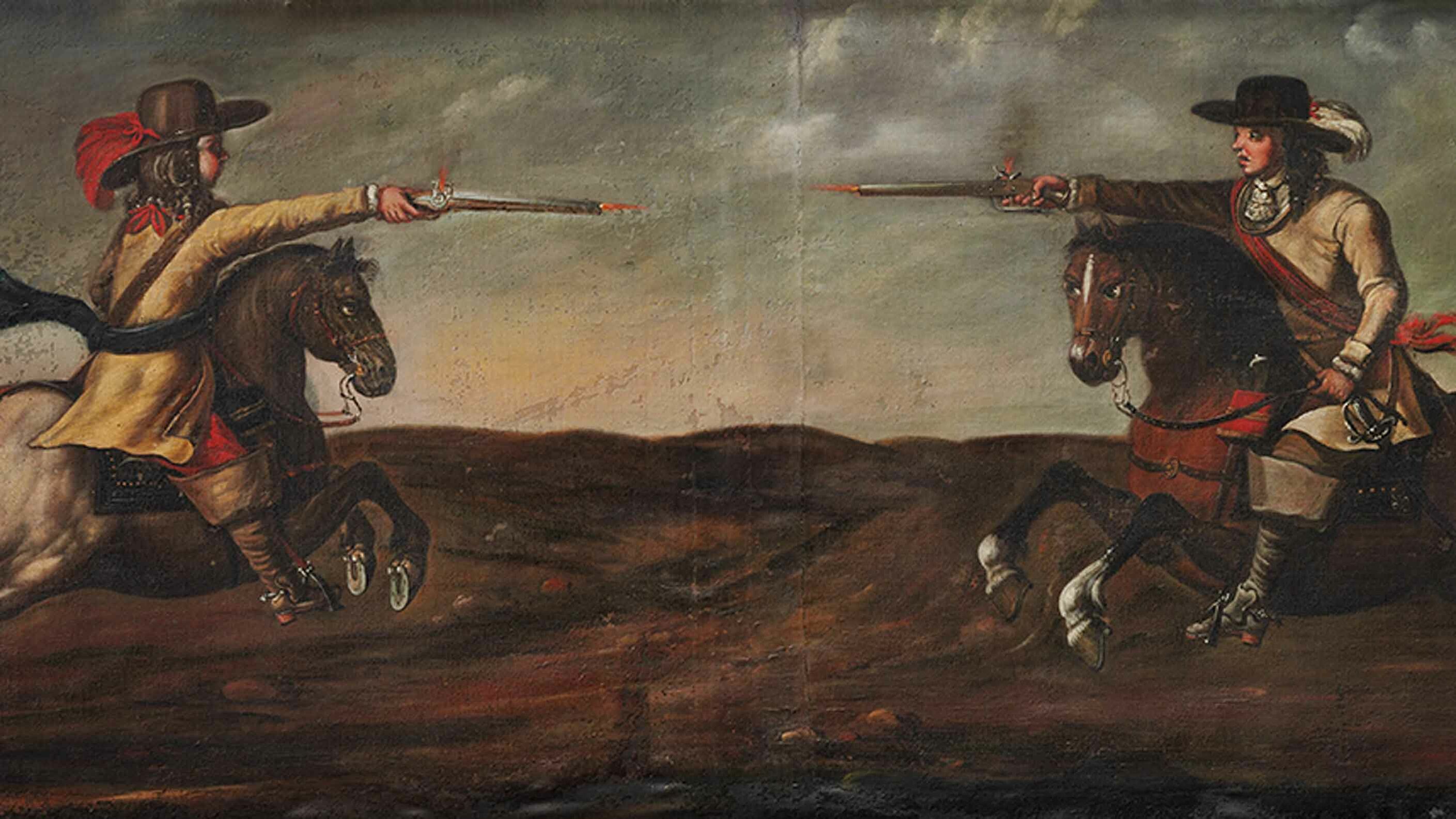 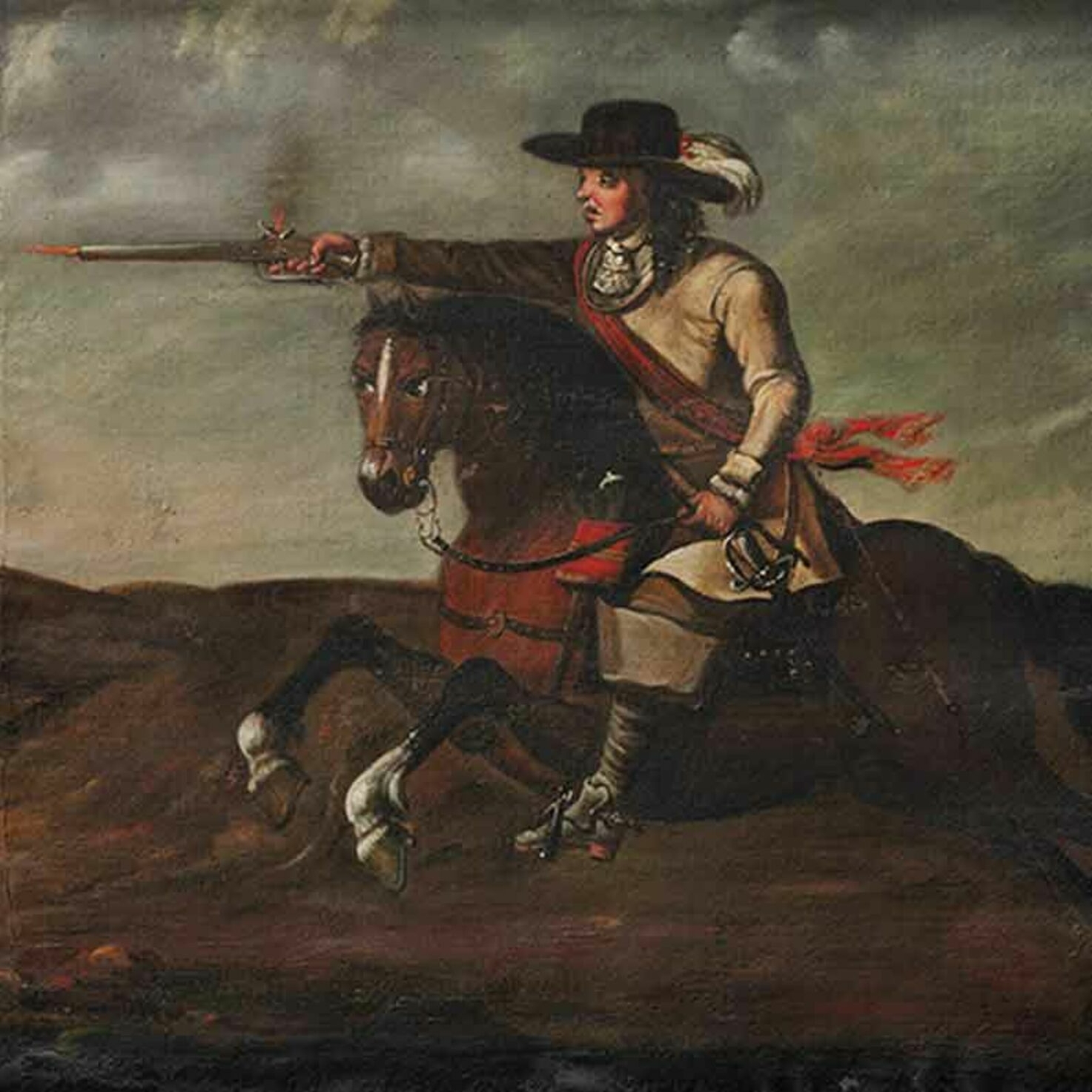 Pistols sing the song of death

Why did two respectable Schaffhausen noblemen have a duel on a freezing cold January afternoon in 1659? And in Solothurn? The story of a long-standing family feud.

Dark clouds roll across the sky and the countryside looks bleak and barren. Two men race towards each other, their horses in full gallop, their wheellock pistols aimed at each other with deadly intent. There is a muzzle flash. How will this exchange of fire end? The oil painting shows the climax of a bloody feud between two noble families from Schaffhausen.

The riders are Major Heinrich Im Thurn (born 1621) and Captain Christoph Ziegler (born 1616). Both men came from influential Schaffhausen families and were in the service of the French crown at the time of the duel. A conflict had been simmering between the Im Thurn and Ziegler families for quite some time, mainly about power and positions in the town on the Rhine. Both families had representatives in the most important political bodies of Schaffhausen in the 17th century – Christoph’s father, Johann Jakob Ziegler (1587–1656), held roles including that of town mayor. The Im Thurn family also boasted an influential mayor from 1632 to 1648 in Hans Im Thurn-Peyer (1579–1648). The struggle between the Ziegler and the Im Thurn families to gain influence in the politics and society of the Schaffhausen area led to accusations of corruption, bribery and illegal enrichment at the expense of the state treasury on both sides...

Violent confrontations were the order of the day.

Violent confrontations were also the order of the day. For example, a relative of Heinrich Im Thurn, the nobleman Hans Friedrich Im Thurn (1610–1681), was attacked in the street. After the latter had openly made an accusation against the mayor Johann Jakob Ziegler during a council meeting in 1654, he was attacked on his way home by the mayor’s sons and brutally beaten and wounded with sticks and rapiers. Among the attackers was Christoph Ziegler, Heinrich im Thurn’s later opponent. Although this attack led to an indictment, Mayor Ziegler came to the defence of his sons and this led to new conflicts.

They violently insulted each other.

How did the duel come to pass on that cold winter afternoon in 1659? As previously mentioned, Heinrich Im Thurn and Christoph Ziegler were in the service of King Louis XIV at the time and both of them were on home leave. Major Im Thurn had been in Solothurn since 21 December 1658, where he was staying with the French ambassador Jean de la Barbe (1602–1692). Captain Christoph Ziegler’s growing resentment was provoked by Heinrich’s rapid career in French service, his personal relationship with the ambassador and the simmering family conflict.

This article originally appeared in the Landesmuseum blog. It regularly covers fascinating stories from the past. For example ‘Flirty Tennis’.

While on leave in Schaffhausen, Christoph heard a rumour that Heinrich Im Thurn wanted to conspire against him with the ambassador. An open officer’s post in the company that Christoph Ziegler had established for the French court in 1647 was to be given to one of Heinrich’s favourites rather than one of Ziegler’s sons. This was the straw that broke the camel’s back. Christoph Ziegler rode to Solothurn with his servant Jakob Guggerli from Aargau, and arrived on 15 January 1659. On the same day, several letters were exchanged between the two Schaffhausen officers where they violently insulted each other in French. This written exchange is now in the State Archives of the Canton of Solothurn. The letters were carried back and forth by two servants, the above-mentioned Guggerli and Heinrich Im Thurn’s servant Hans or Klaus Grau from what is now the Canton of Fribourg.

Duel on horseback between Heinrich Im Thurn and Christoph Ziegler, anonymous, circa. 1660. The wheellock pistols used in the 1659 duel were not reliable, so the horsemen had to shoot at point blank range.

It came to a double duel.

A duel was demanded as honour had been offended. Ziegler therefore informed his opponent that he intended to face him with “rapier or pistol in hand”. The disputants agreed on a duel on horseback with pistols. The showdown was to take place outside Solothurn in the village of Riedholz, near the “Weihern”, where there were also bathing facilities. Both officers therefore rode out of the town around afternoon on 15 January 1659 accompanied by their servants, who were presumably to take on the role of seconds. They met near Riedholz right by a farmyard.

Memorial near Riedholz which commemorates the event of 1659 near the location of the duel.

It remains unknown whether the customs of a courtly duel were observed before the fight, such as arranging seconds, the number of shots and firing, checking the weapons or selecting the duelling ground. Fighting with wheellock pistols as depicted in the painting was only possible at close range, as these weapons were not very accurate. This meant that the duellists had to hold their fire until they were passing as close to each other as possible. Most likely after a signal, Heinrich Im Thurn and Christoph Ziegler spurred on their horses and sped towards each other with their pistols drawn. Heinrich fired first but his pistol jammed. Taking advantage of the situation, Christoph rode up close, took aim and shot Im Thurn in the head at close range. Both servants also got involved in the shooting and Im Thurn’s messenger Jakob Guggerli was hit by a bullet in the abdomen.

Wheellock pistol made by gunsmith Felix Werder from Zurich, circa. 1640.

Startled by the exchange of gunfire, the owner of the nearby farm stepped outside and saw the horse with the slumped Heinrich Im Thurn run up to the fence, where the man from Schaffhausen fell from his mount. While Christoph Ziegler disappeared into the distance, Grau came riding into the farmyard and asked for help for his master. However, help came too late. The newly married 38-year-old Major Heinrich Im Thurn, father of a three-month-old boy, was already dead. The farm maid had to bring the body inside the house.

Christoph Ziegler, leaving his badly wounded servant behind, rode back to Schaffhausen in a mad rush before news of the incident reached the Rhine town. From there, he fled to his estate near Thayngen and then on to Strasbourg. Jakob Guggerli was taken to the Krone inn in Solothurn, where he died of his injuries two days later.

View of the town Solothurn, dated 1659, the year when the duel took place.

The Solothurn authorities were anxious to deal with these kinds of honour quarrels harshly and instigated a criminal investigation, following which both families received heavy fines, with the family of the victim receiving a milder punishment. In addition to the criminal investigation, the duel caused another problem. Where should the body of Heinrich Im Thurn be buried? As a Protestant, Im Thurn could not and was not allowed to be buried according to the reformed rite in Catholic Solothurn. With the help of the French ambassador, the body was finally transferred to Bern territory and buried in the Oberbipp church, where you can still see a gravestone dedicated to Im Thurn. The Im Thurn family spent a lot of money on the burial and donated a new pulpit to the church depicting the Schaffhausen family’s coat of arms out of gratitude.

The killing of Heinrich Im Thurn was not forgotten.

Christoph Ziegler, banished from the town and the Schaffhausen area for a long time because of the duel, was later pardoned to a large extent and allowed to return to his country estate near Thayngen. However, the killing of Heinrich Im Thurn was not forgotten and Heinrich’s two teenage nephews swore that they would wage a vendetta. On 7 September 1661, they ambushed Christoph Ziegler in front of his manor house – when he came out of the door in the early afternoon on that day, they shot him down with two bullets.