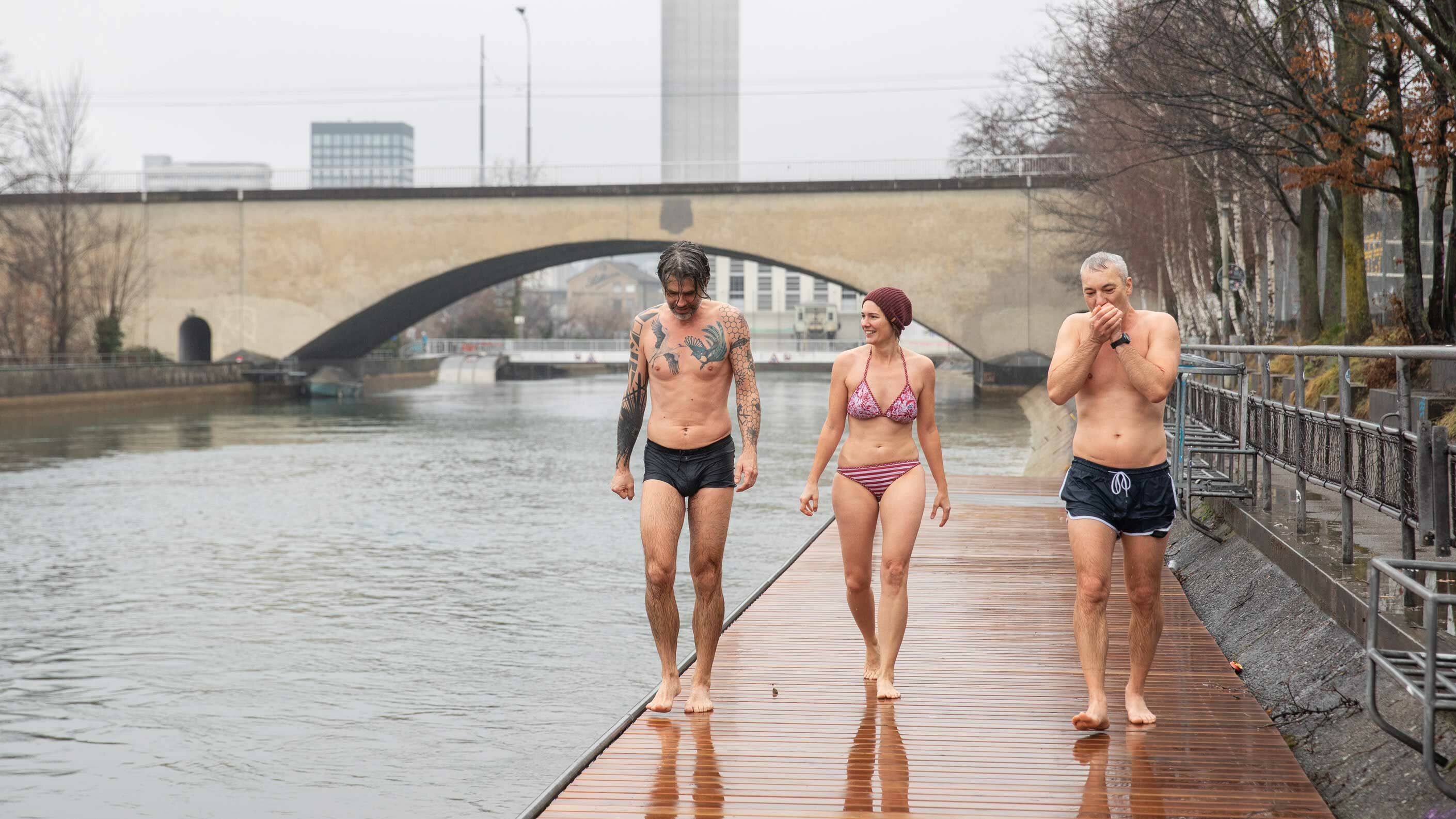 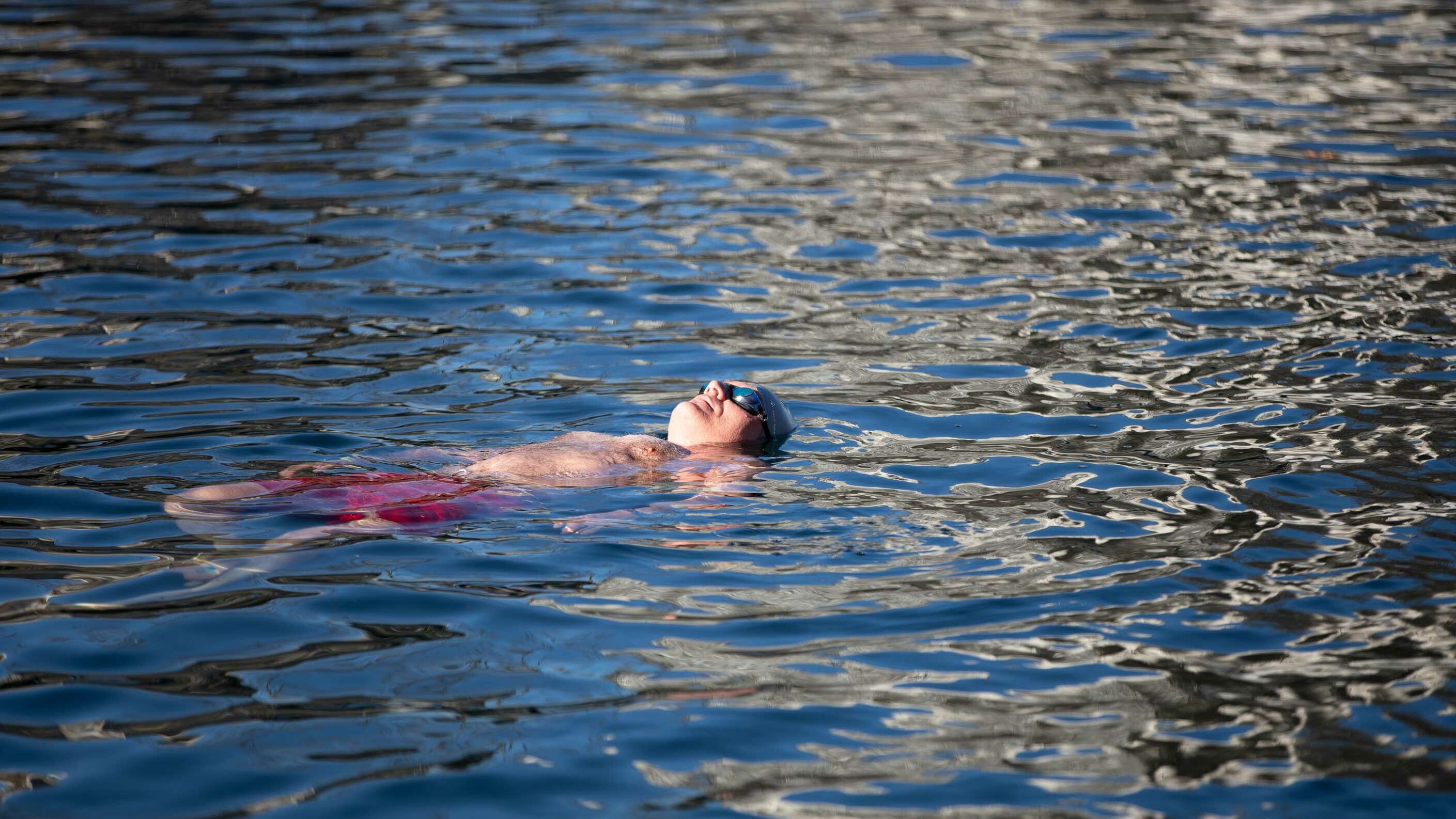 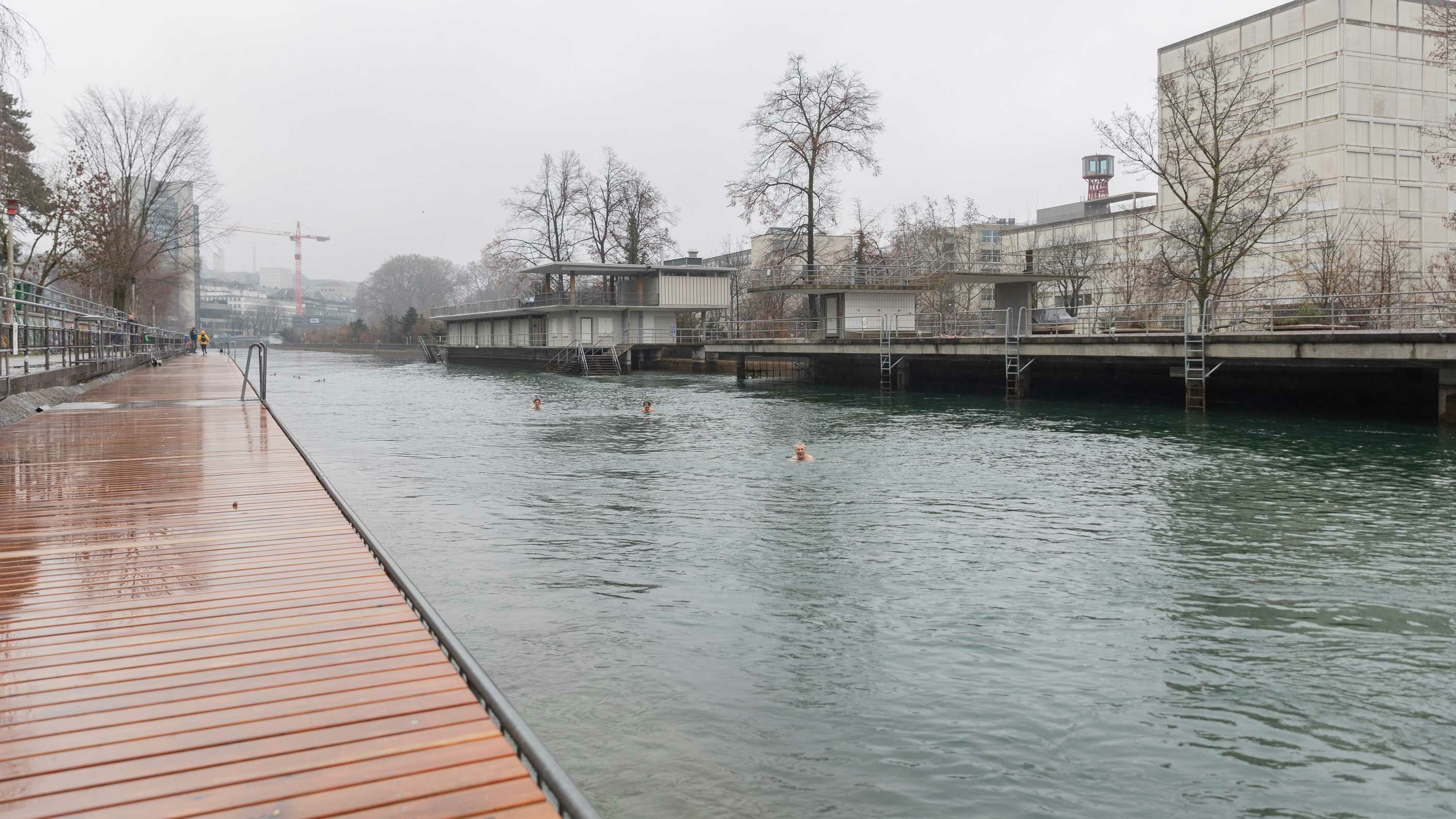 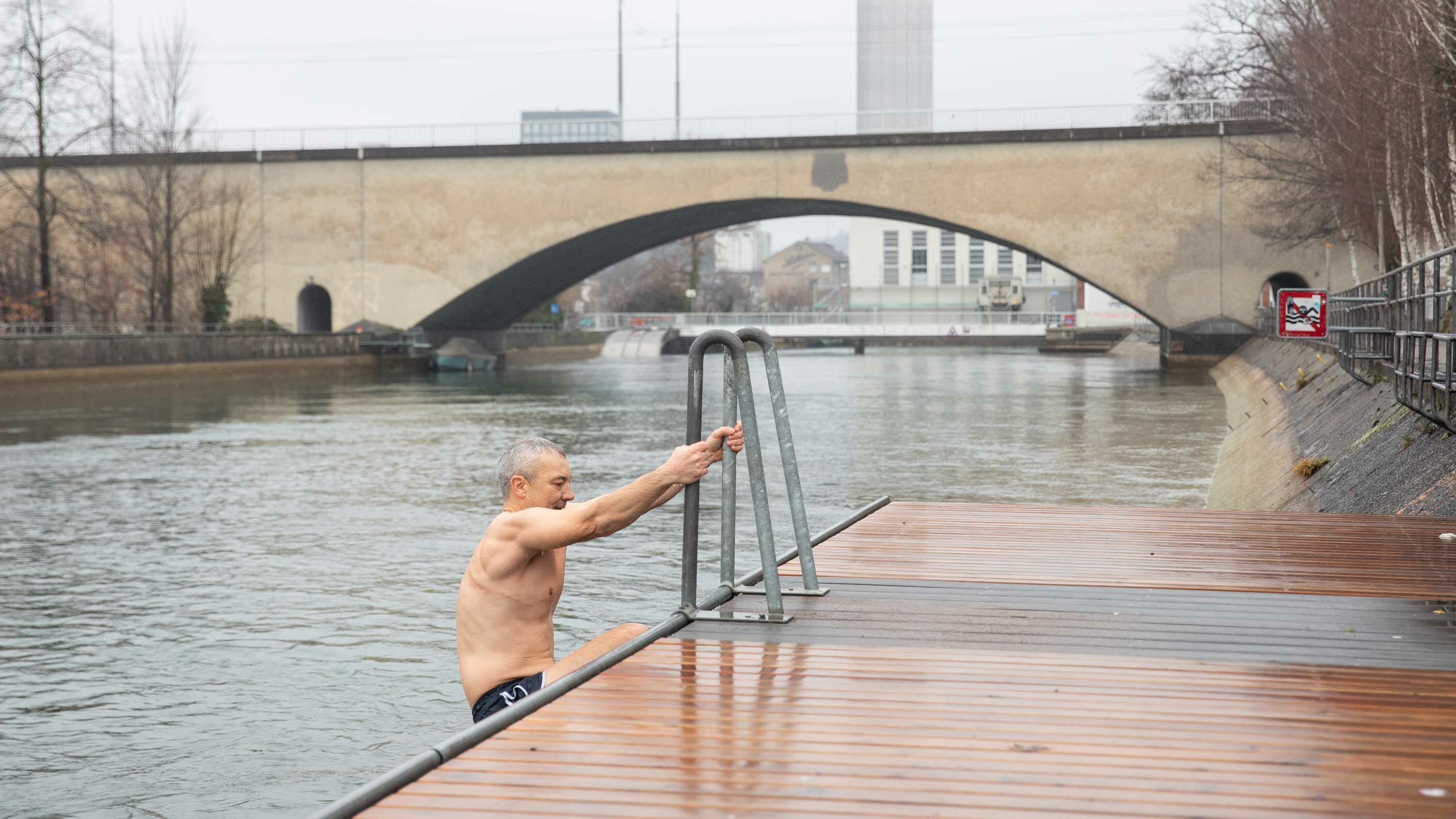 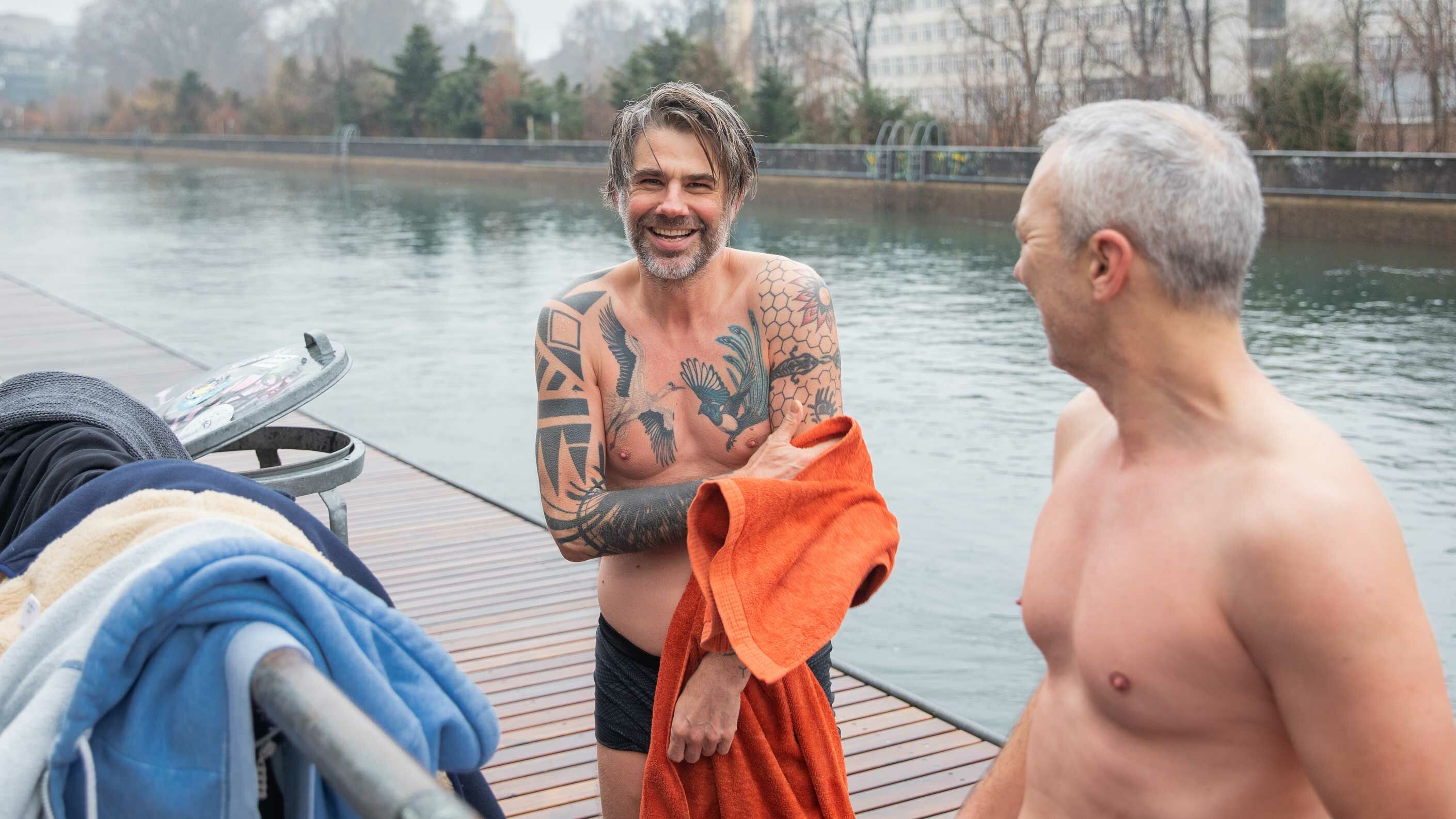 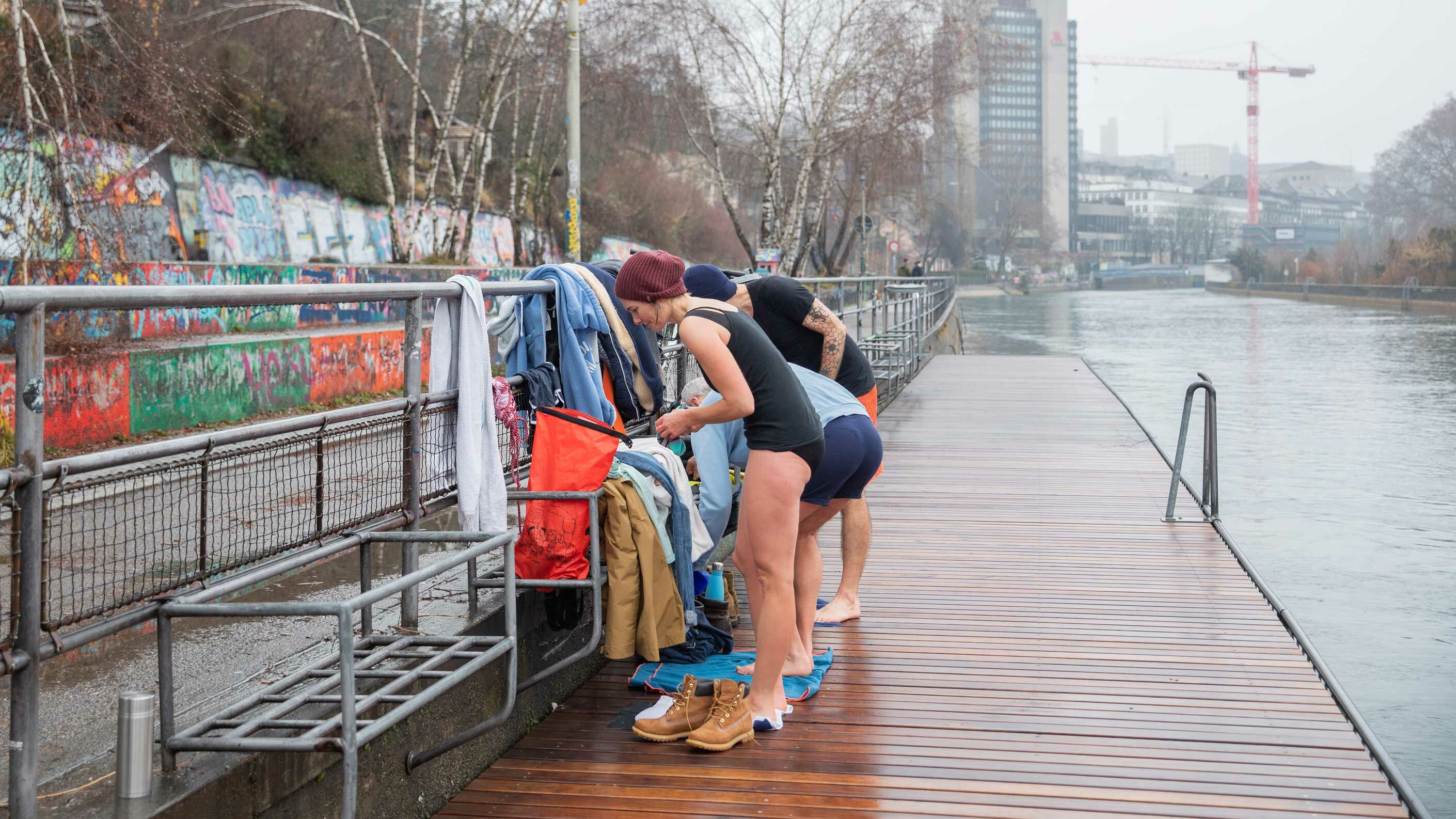 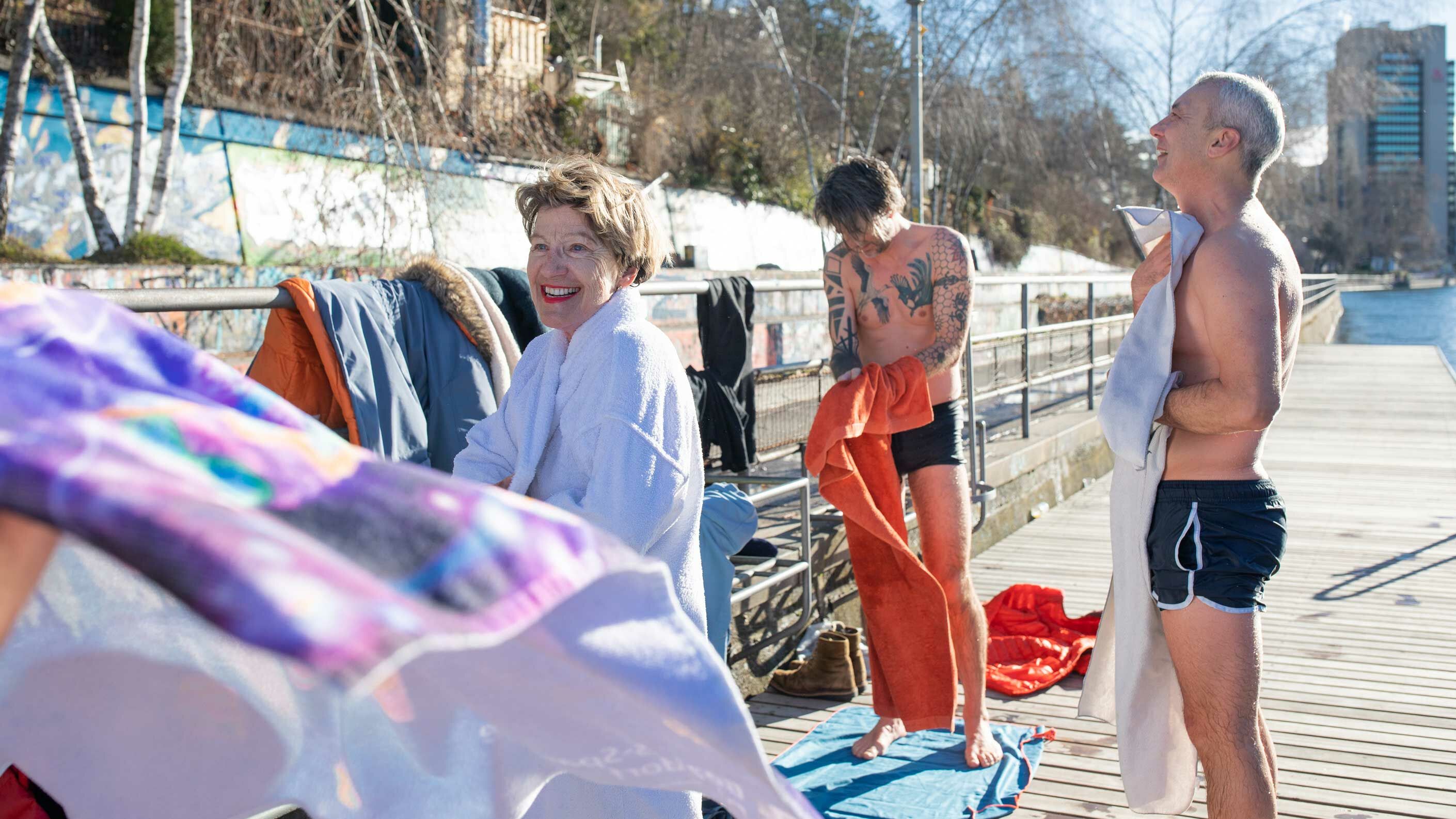 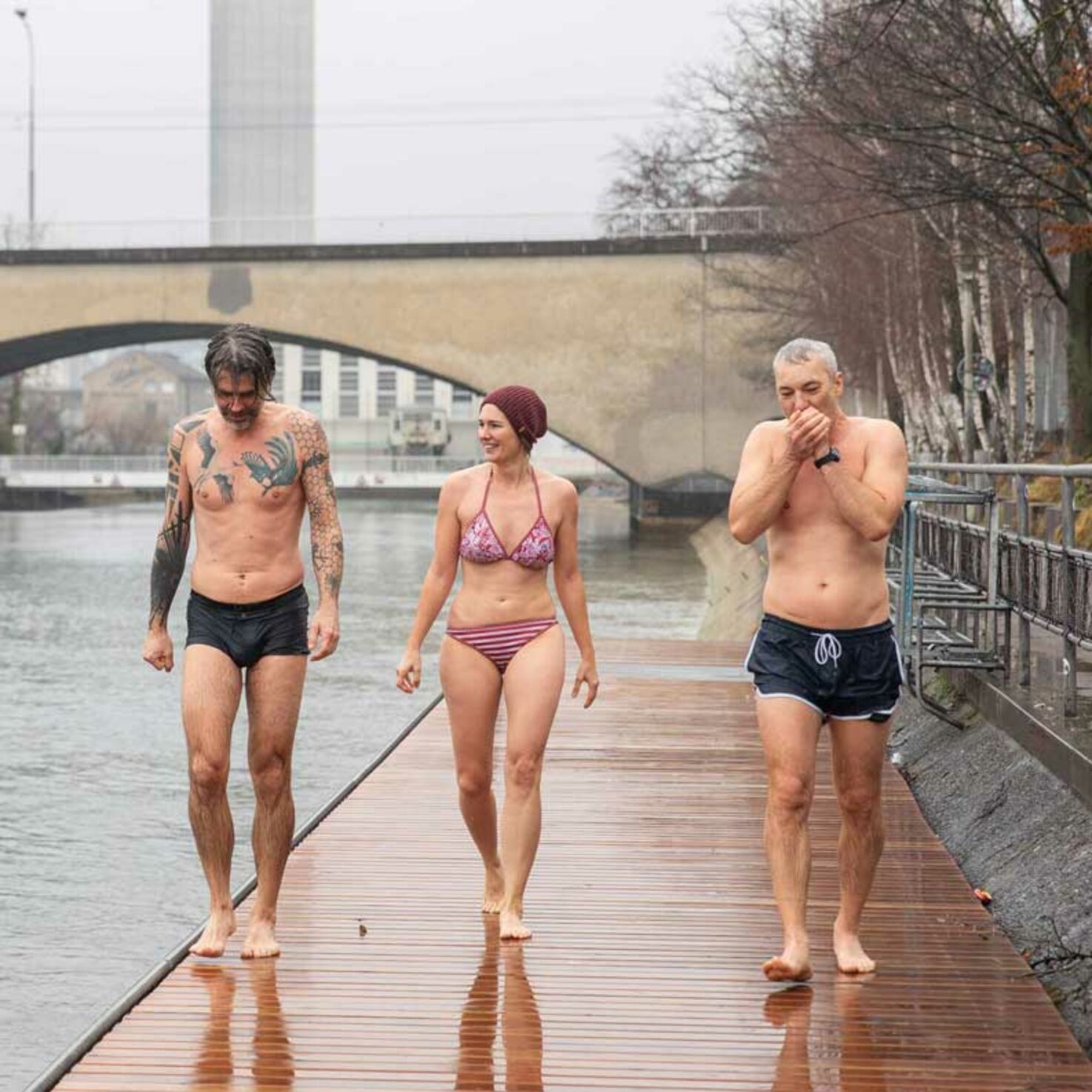 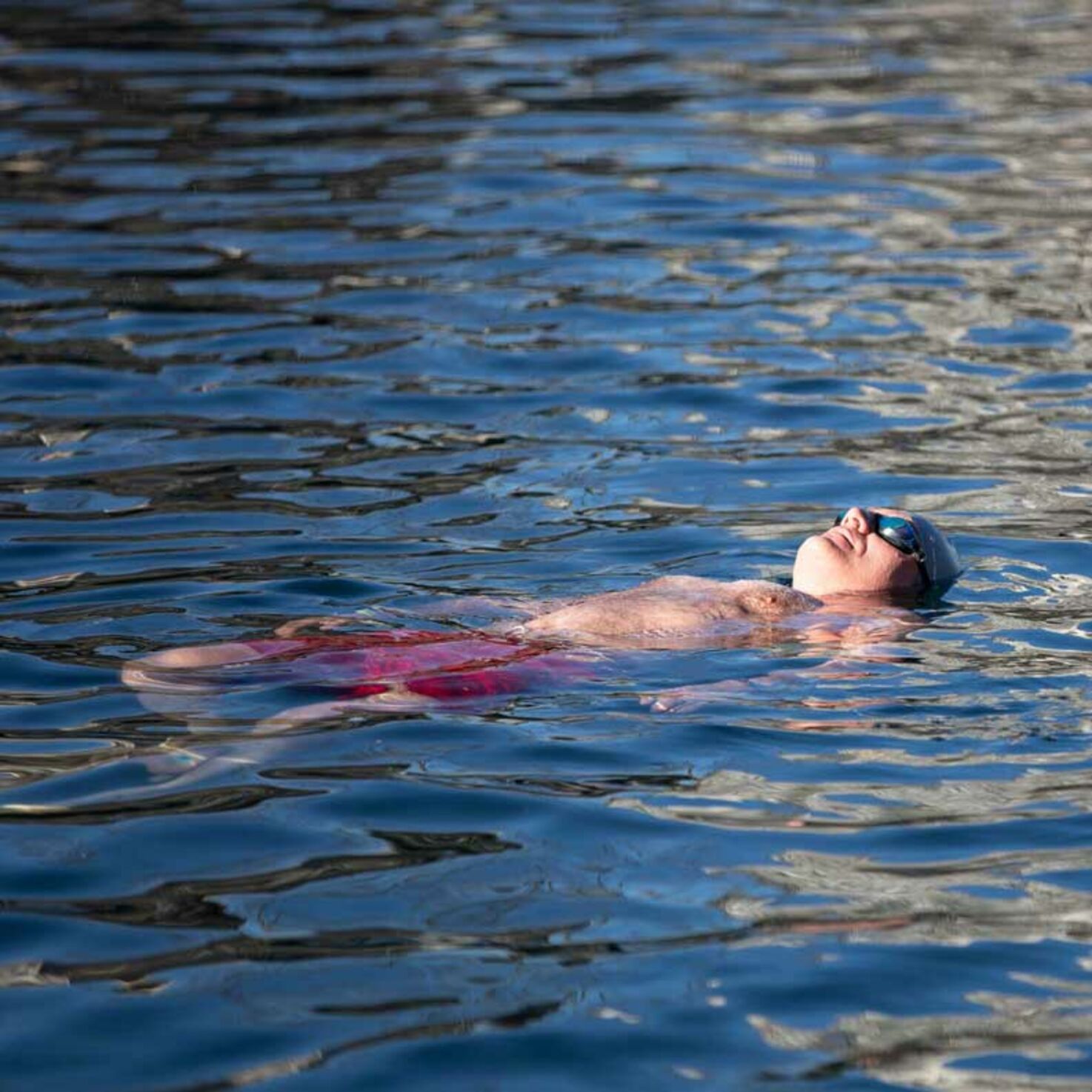 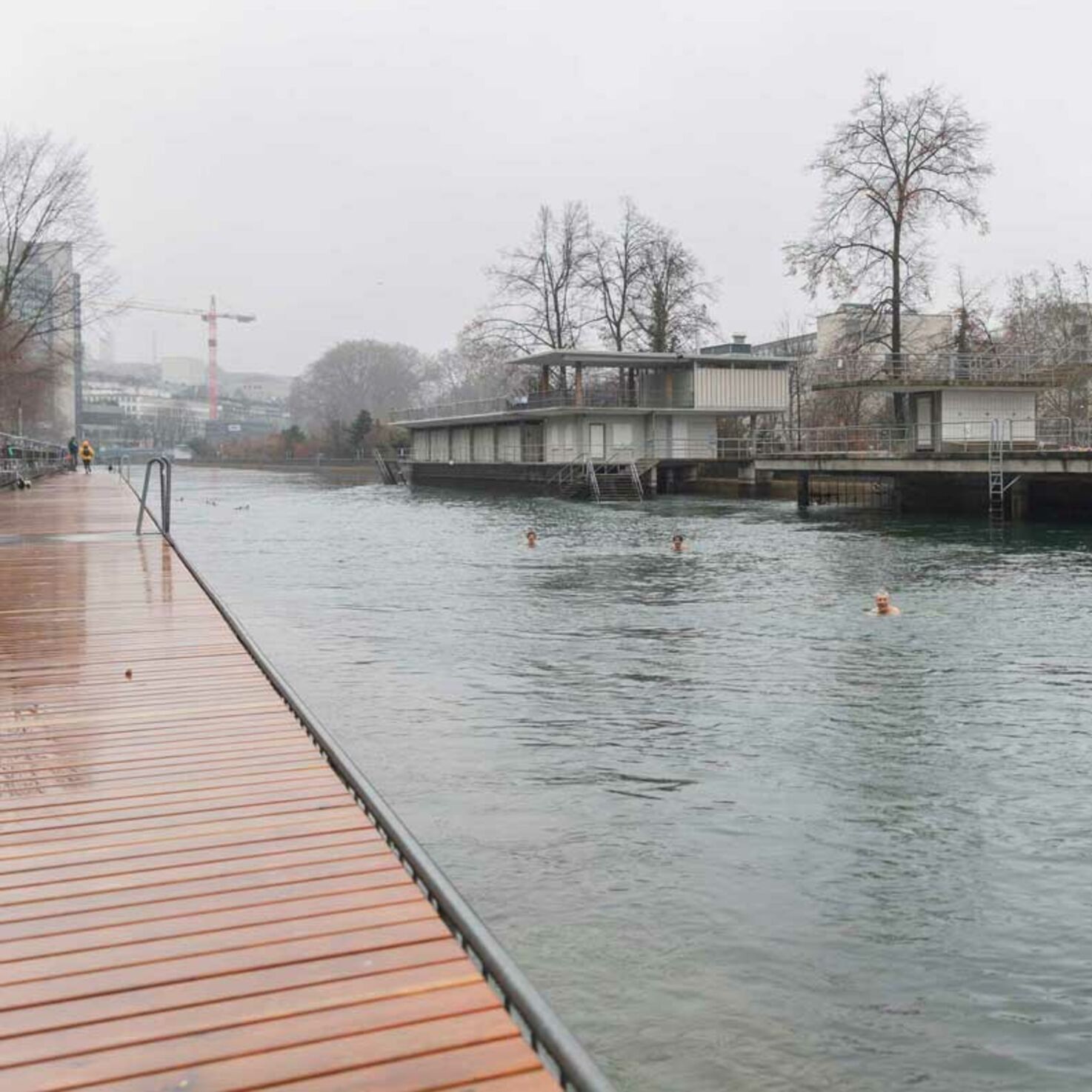 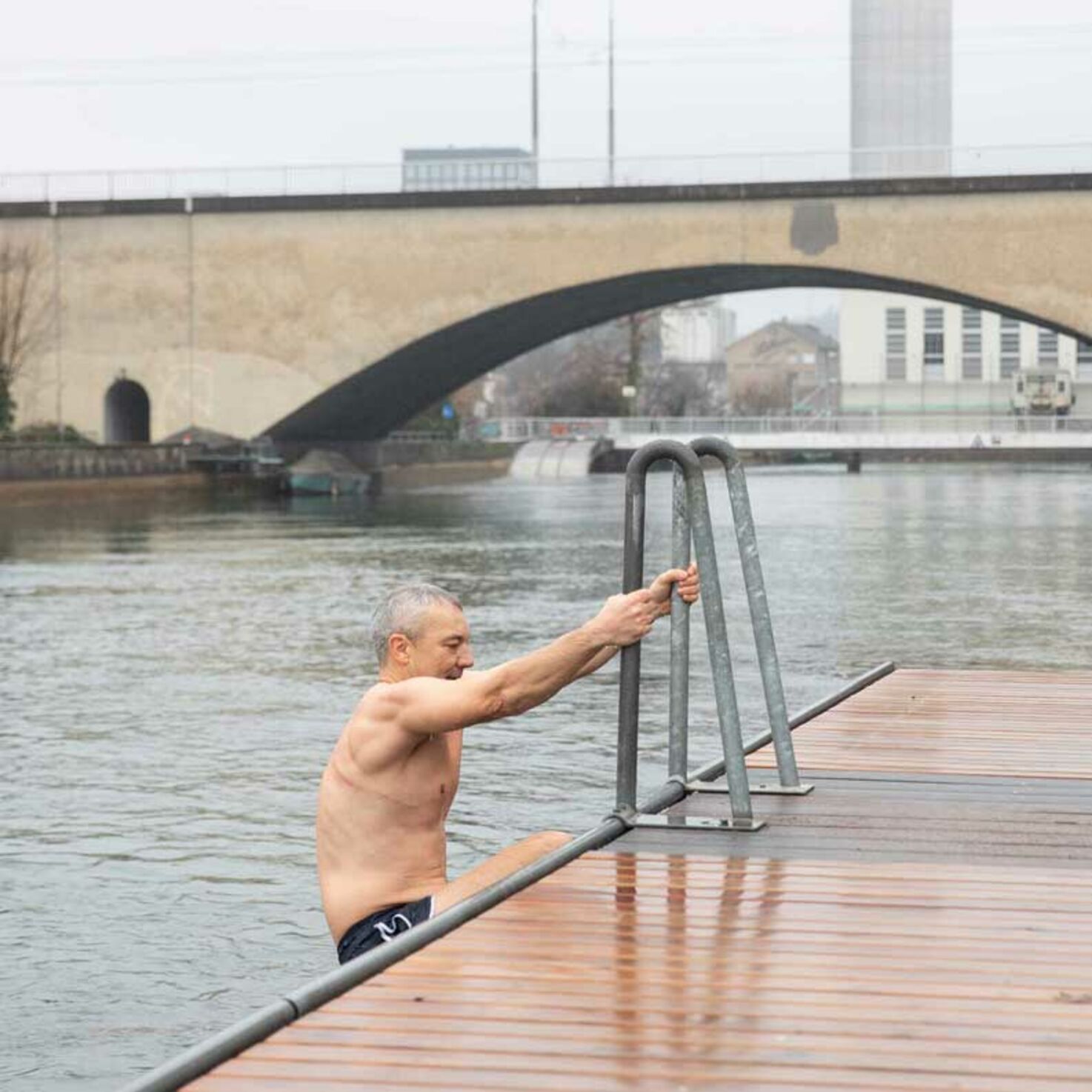 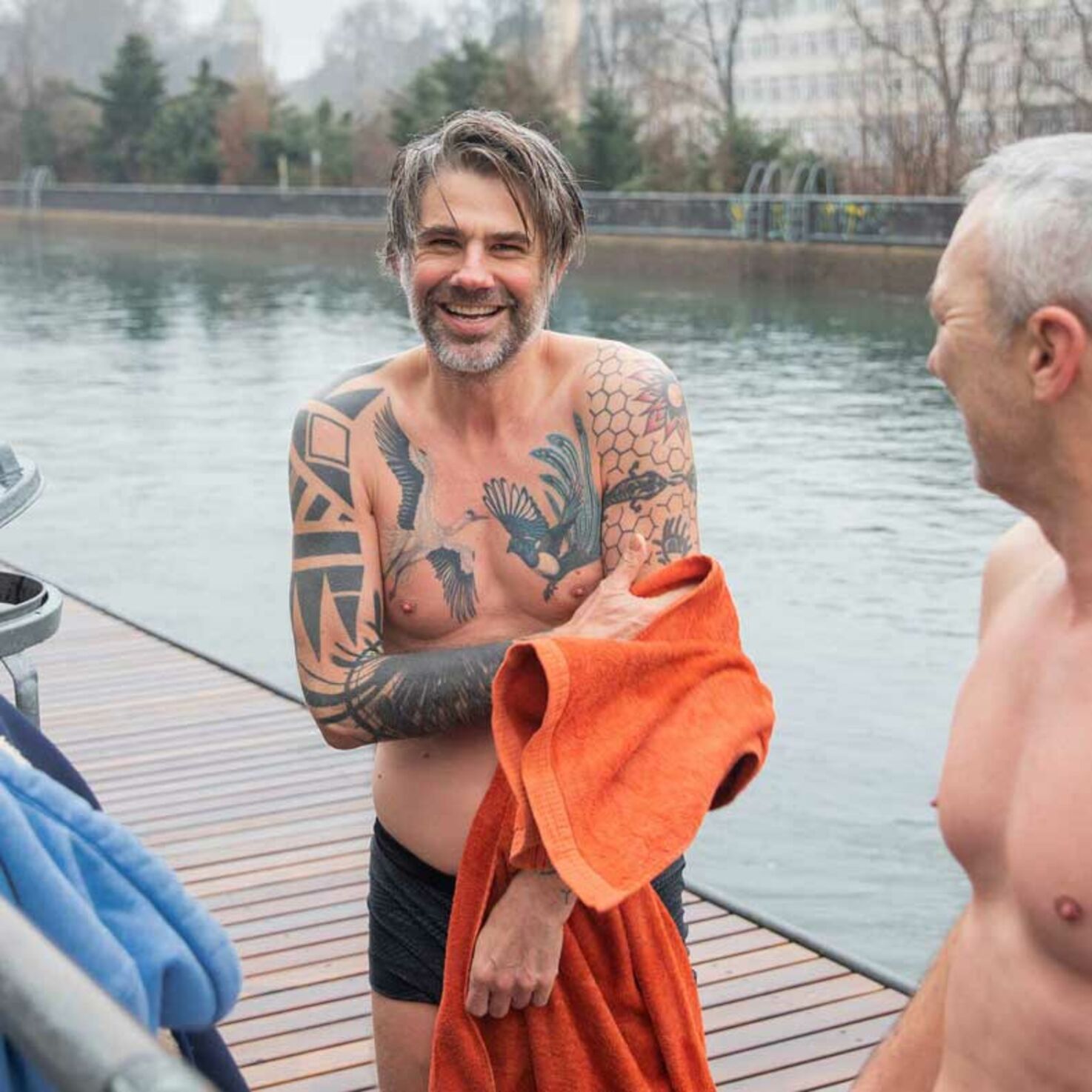 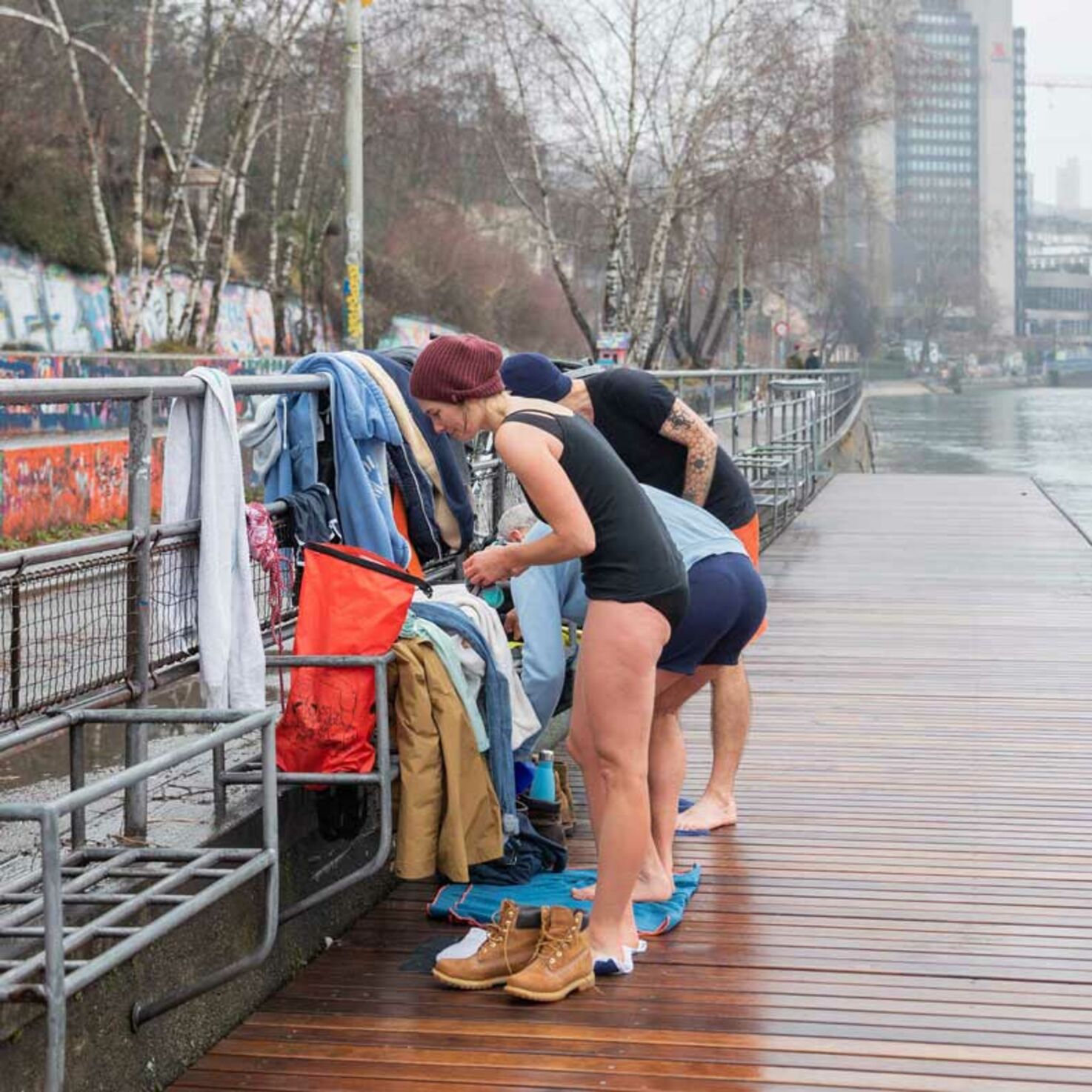 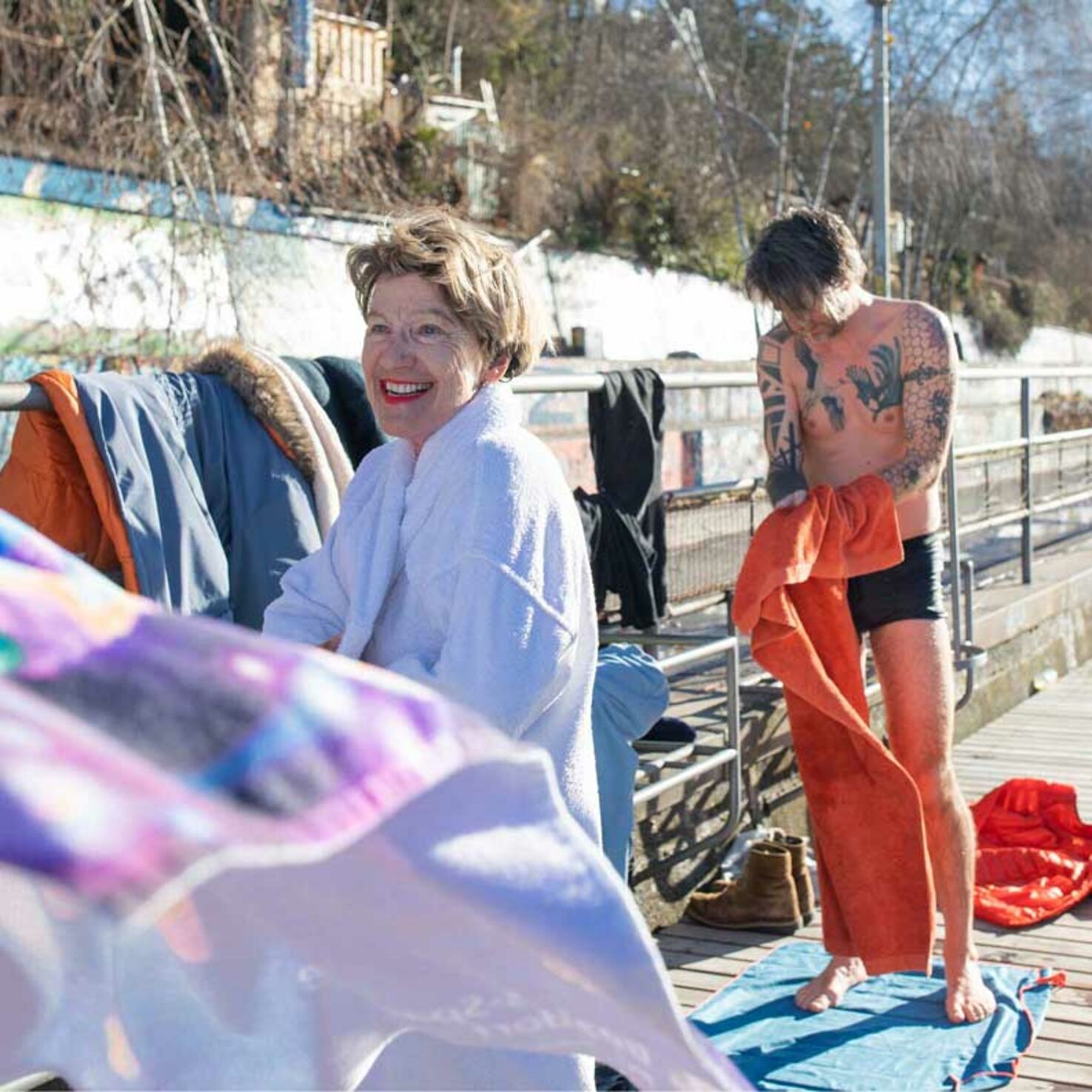 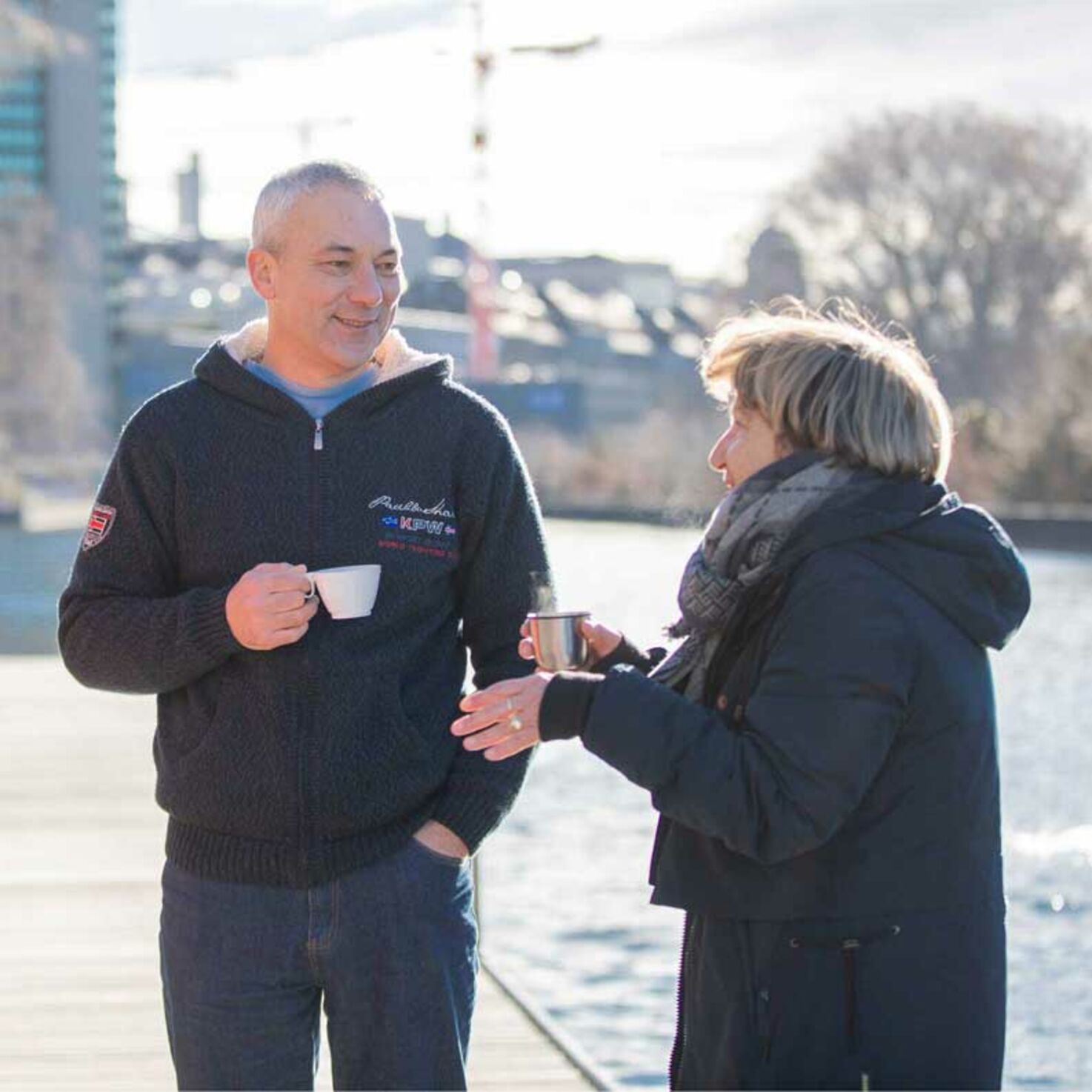 Swimming in the Limmat – especially in winter!

When it snows, they like to go swimming in the Limmat. Ursi Straumann, Alex Tüscher, Michael Meier and their friends in 4 Seasons Outdoor Swimmers Zurich group jump into the river at Oberer Letten every Sunday – even in sub-zero temperatures.

It is a January morning shortly before the second lockdown. Snow is lying on the ground in the city of Zurich, as well as on the wooden bridge at Oberer Letten. It is drizzling, and the cold creeps in under your winter coat. Anybody who can stay indoors today will do so – but not the 4 Seasons Outdoor Swimmers. They meet at 10:30 am on the dot on the banks of the Limmat, under the colourfully spray-painted concrete walls. Ursi Straumann, 68, pulls up on her touring skis, to the amusement of her friends.

The swimmers have a quick chat and then get on with taking their clothes off, down to their swimming costumes. Then Ursi takes the lead in descending the step ladder into the Limmat. Then the rest jump in, one after another. The water temperature is 5 degrees Celsius.

At the last step, the group get out again.

They swim in slow movements to the lower end of the bridge. At the last step, the group get out of the river again. ‘I’m wearing my swim shoes today, so that I don’t have to step in the snow,’ Ursi says cheerfully, throwing her bathrobe over her shoulders. Michael Meier, 53, and Alex Tüscher, 63, walk back barefoot, however. With numb fingers, they dry themselves off and put on their warming clothes, one layer after another. Next, if the restaurants were open, they would sit together in the warmth, drinking tea.

Warming up together would actually be the nicest part of their get-together. But of course, the coronavirus pandemic means the restaurants are closed, so all they can do is have a quick chat in the drizzle.

Whether the water is cold depends on your own attitude.

How do people come to throw themselves into the Limmat on a cold Sunday morning? ‘Swimming invigorates me,’ Ursi Straumann says, beaming. She joined the group two years ago and has been a keen winter swimmer ever since. ‘If I had known about it earlier, I would already have been here much longer. I appreciate the fact that we swim together and could support each other in an emergency.’

Michael, too, now has warm clothes on. He describes himself as someone who really feels the cold. He actually does not like the cold at all, he says. ‘But it’s not a matter of whether the water is cold or not – it’s purely a question of attitude. Every Sunday, I prepare myself mentally from scratch for the endeavour. That’s what appeals to me about it,’ he says. Going swimming in the Limmat with his friends has become a cherished ritual for him.

Now, in the cold season, the group swim only a short distance, so that their bodies do not cool down too much. ‘When the water temperature gets back up to more than 10 degrees, we swim the long stretch from the Marriott to the hydroelectric power plant,’ Alex explains. He is already looking forward to spring. ‘When other people lie out in the sun but are not yet ready to face water at 10 degrees, that is when I enjoy it most,’ he says.

The 4 Seasons Outdoor Swimmers have been in existence for 13 years. The group’s members are aged between 30 and 70. Those who want to come along on a Sunday send a message to the WhatsApp group a little in advance and, in turn, encourage the others to do the same. For many years, the 4 Seasons Outdoor Swimmers were the only people swimming in the Limmat in winter. Now, the hobby has become popular. On this Sunday morning alone, another three or four groups appear and venture into the chilly waters for a shorter or longer period of time.

Do you fancy a cold swim in the Limmat too? Here are a few tips for beginners: