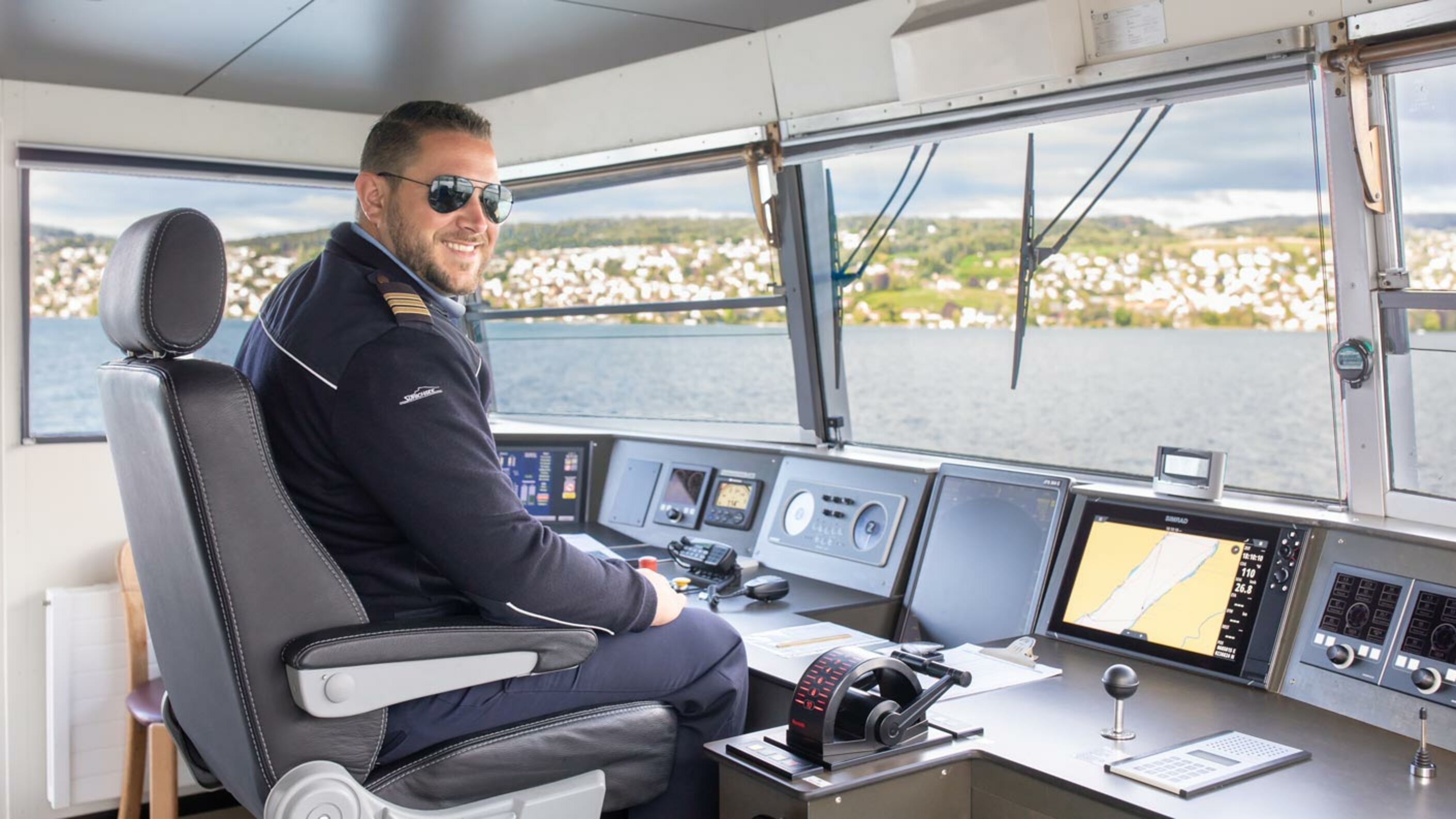 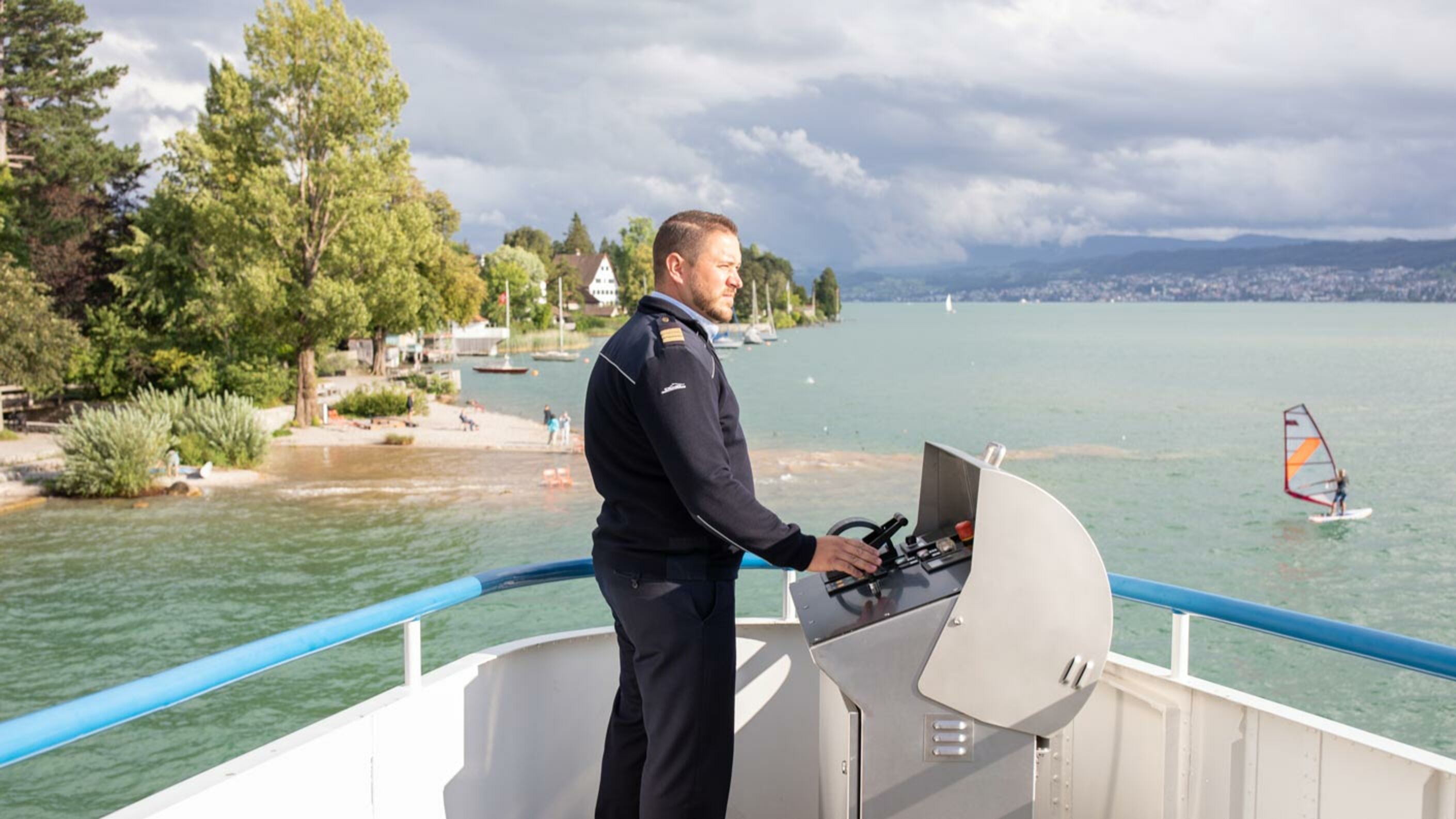 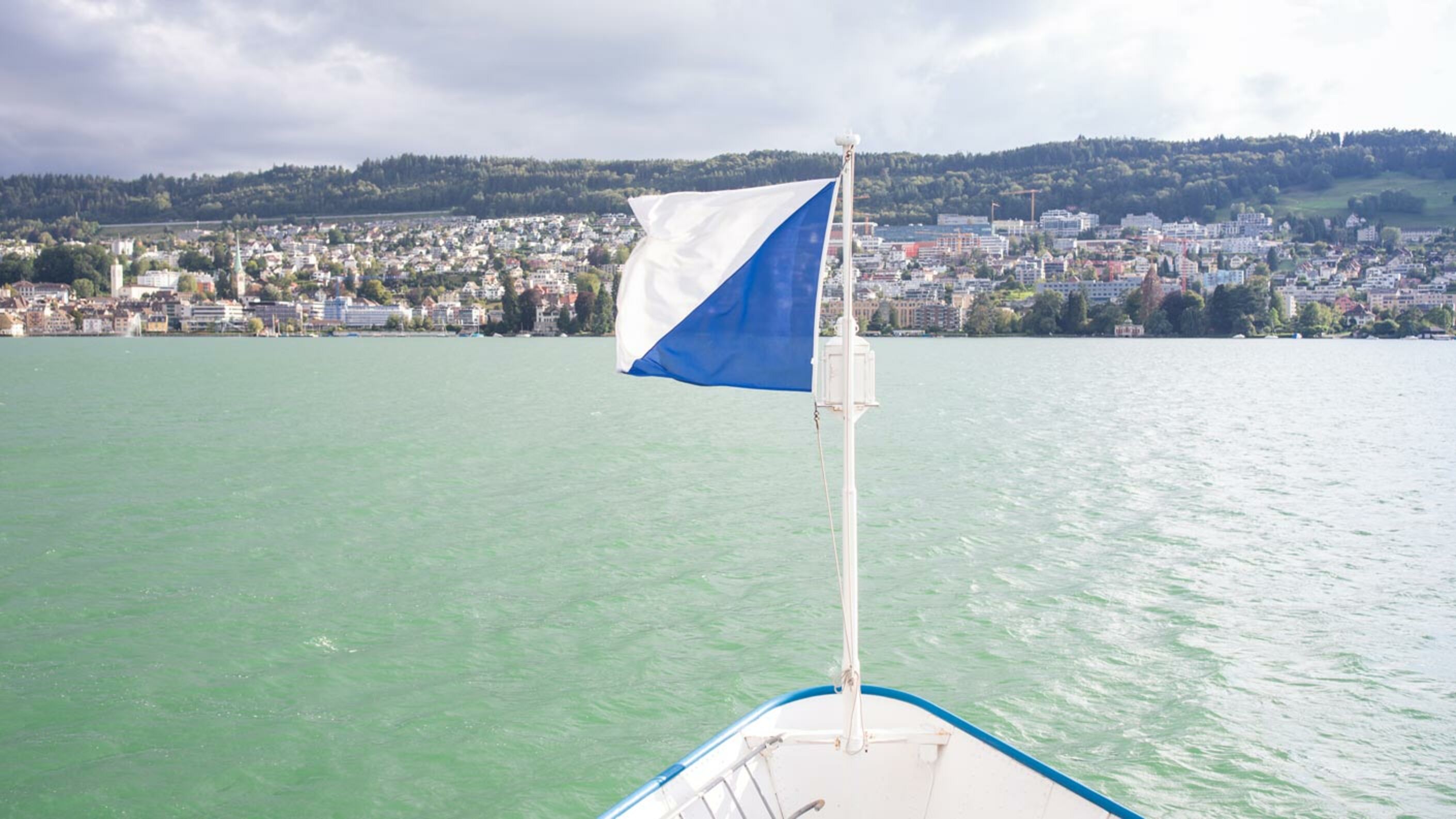 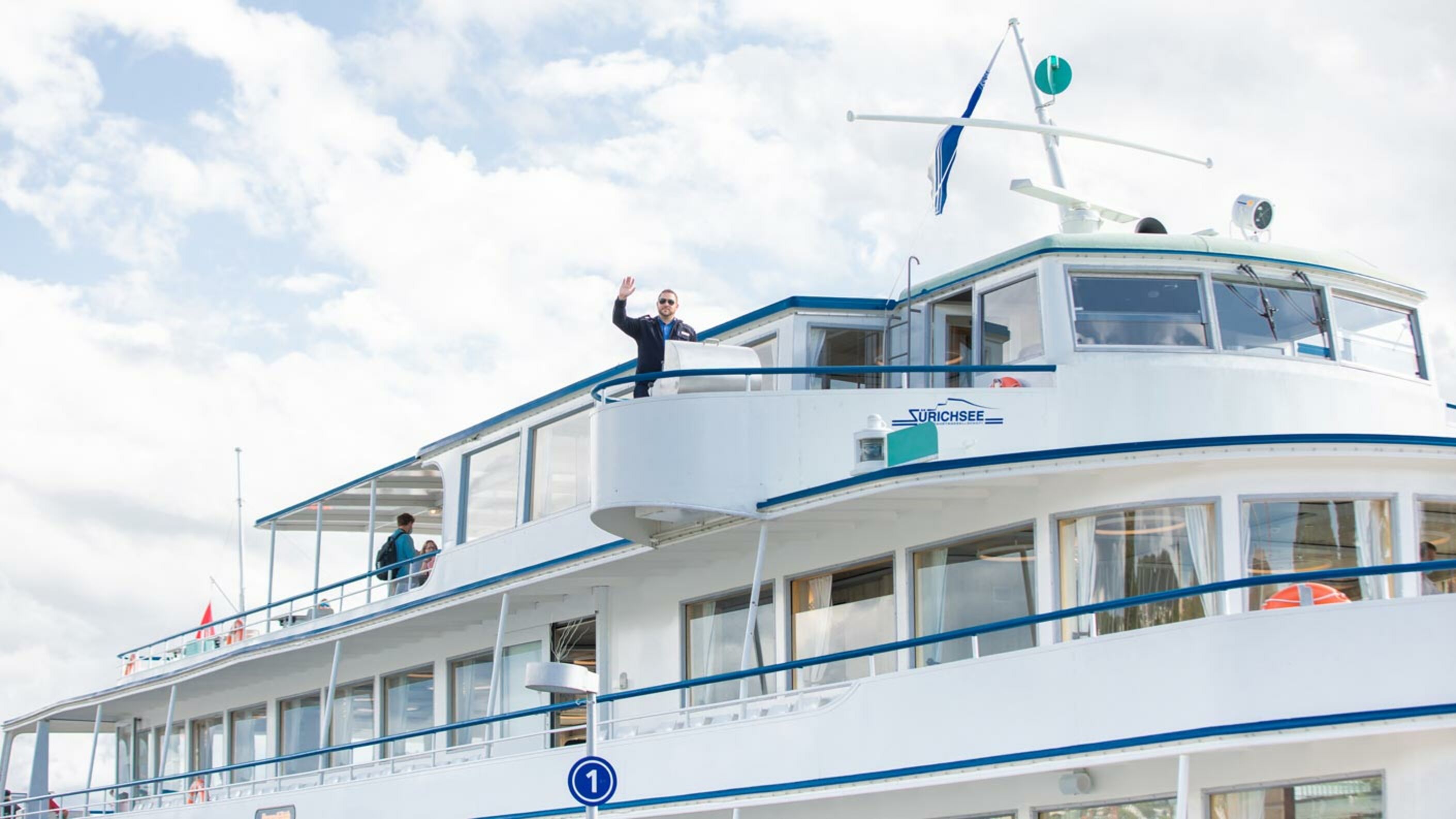 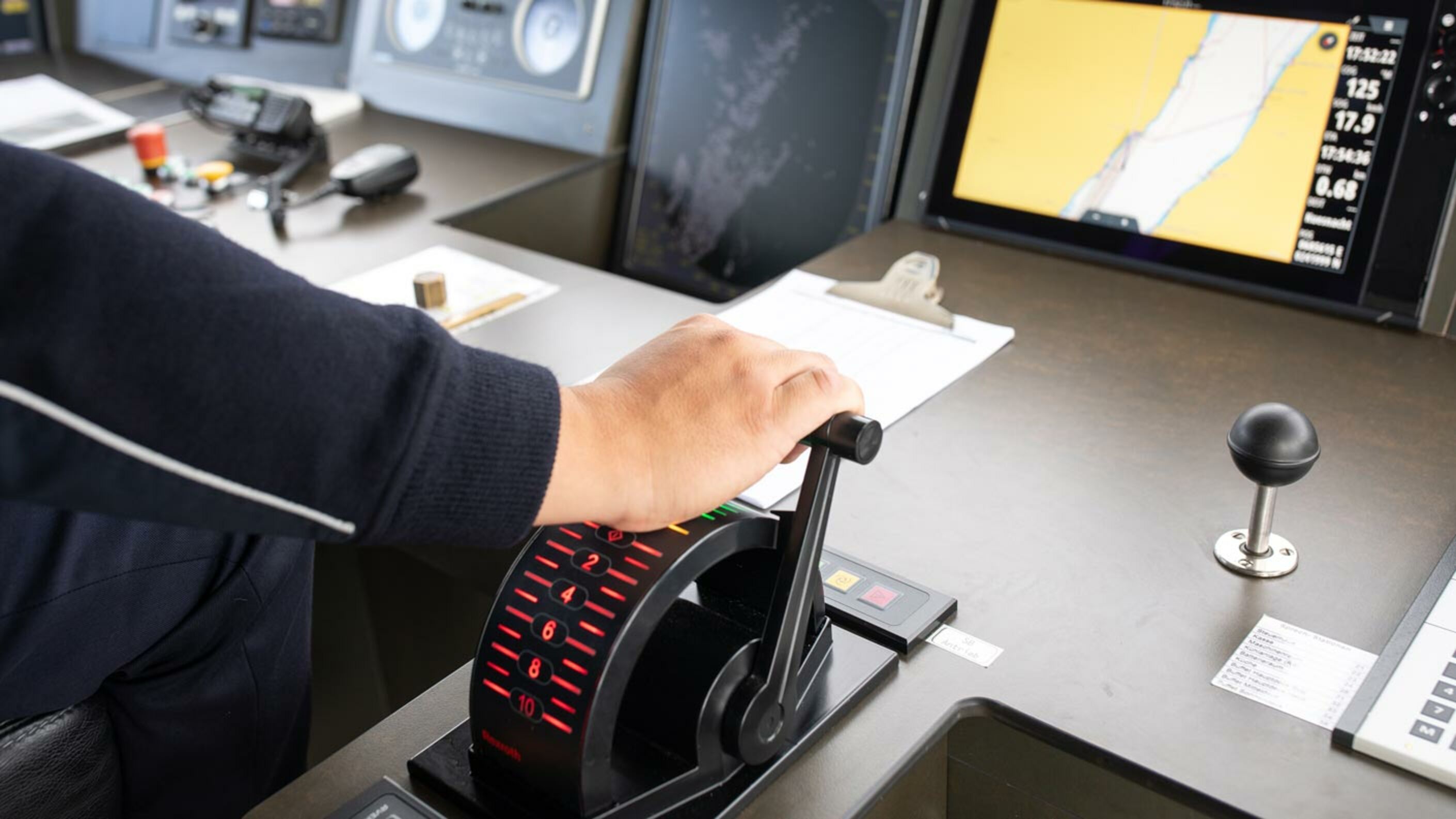 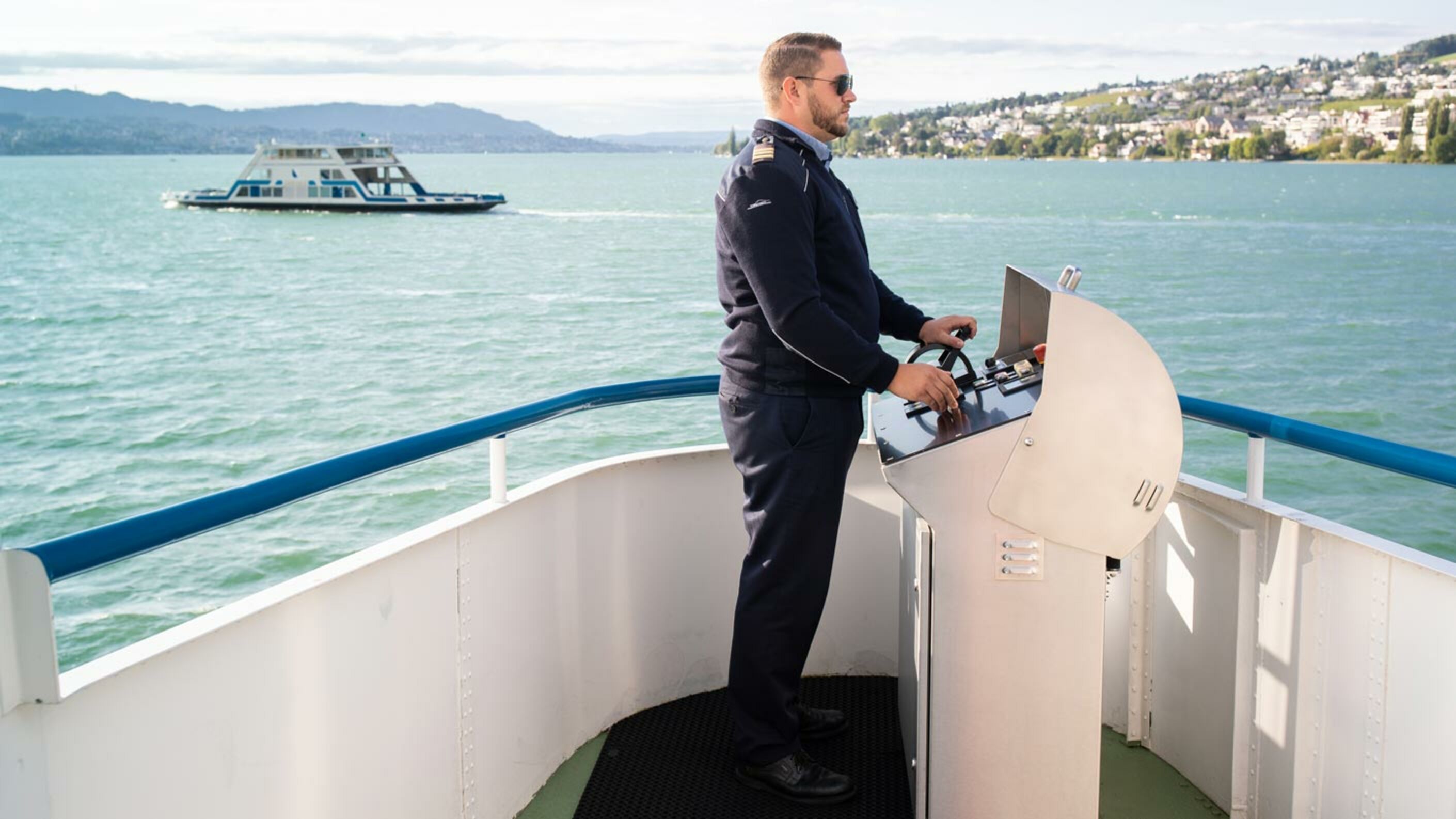 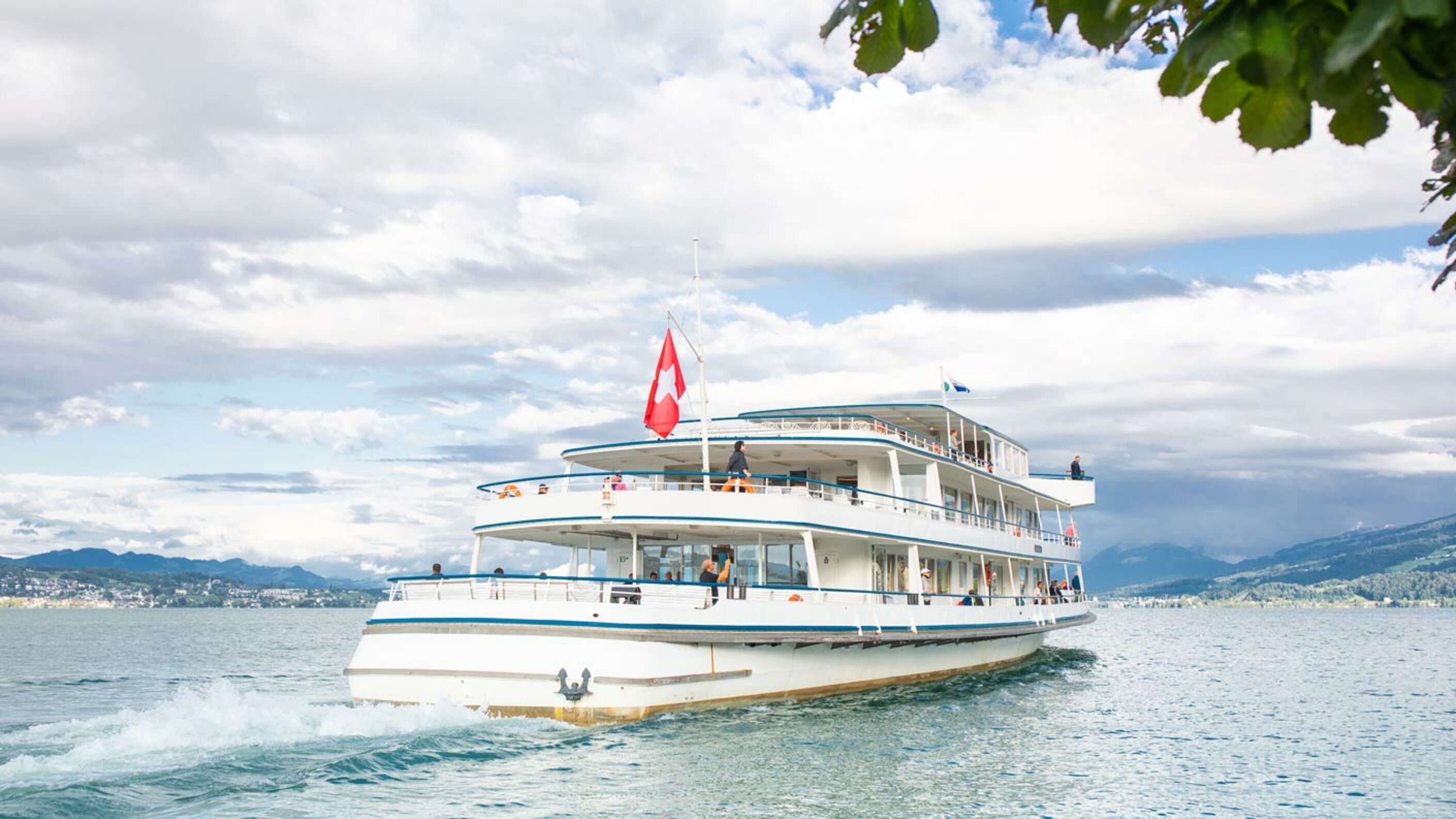 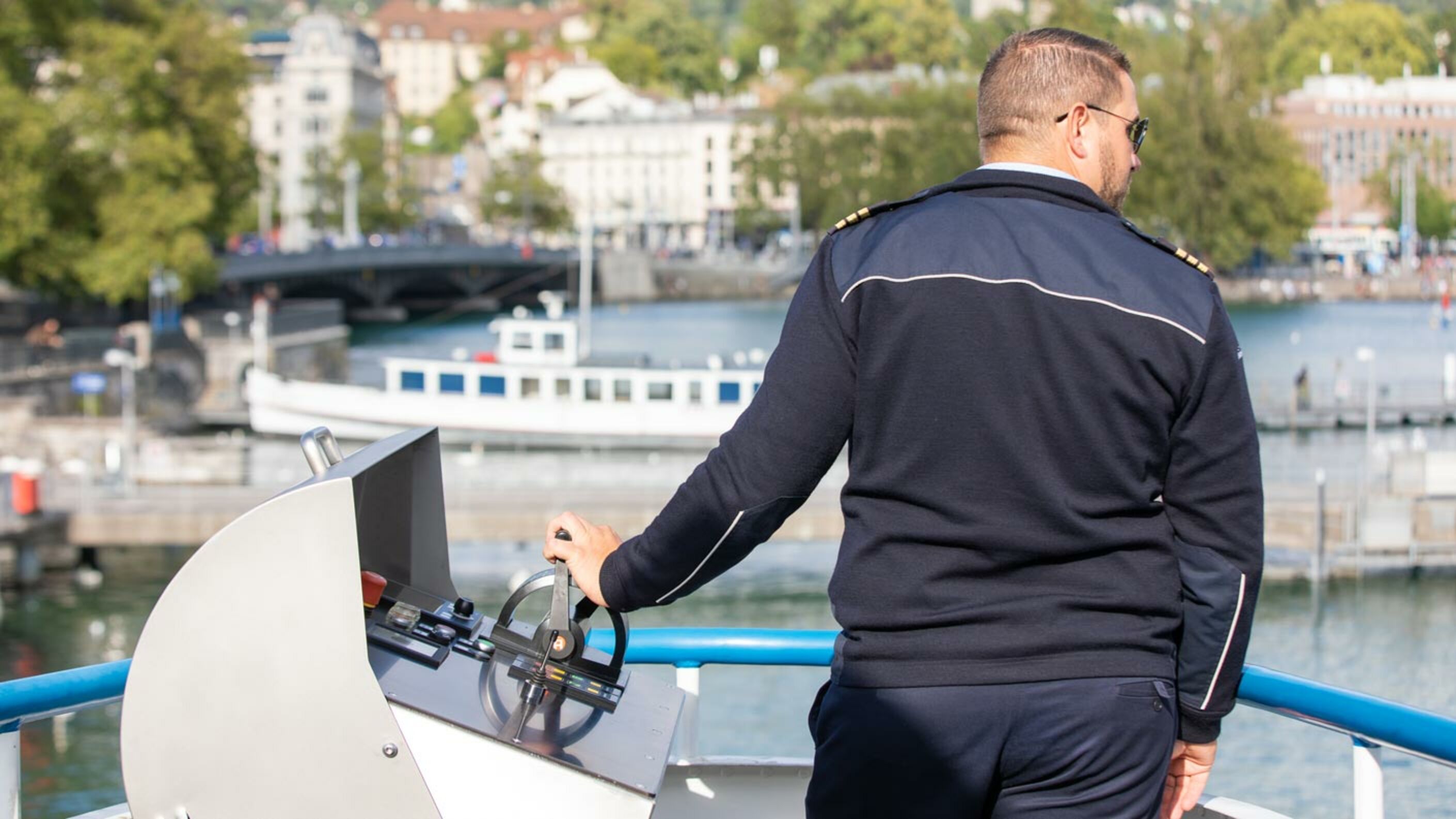 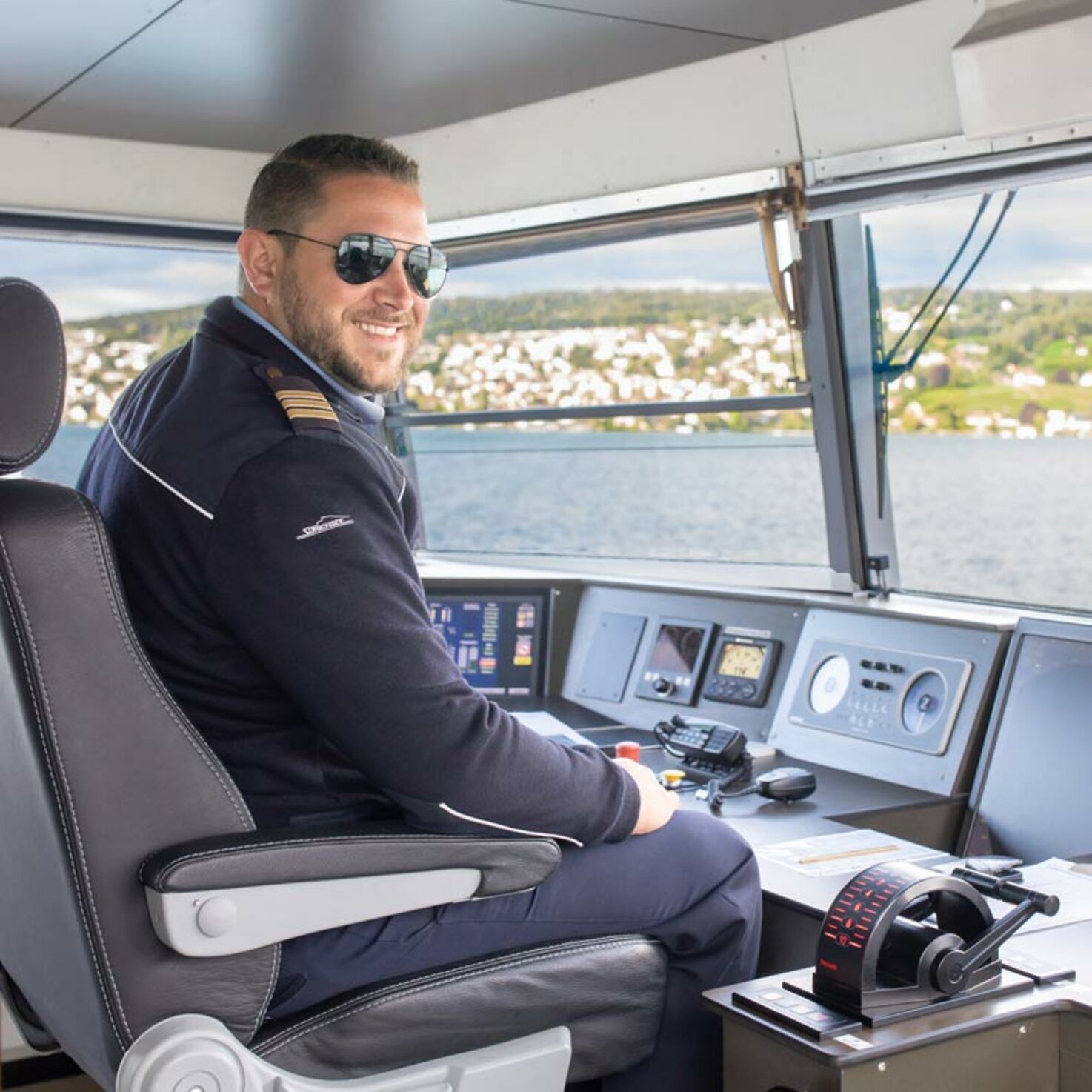 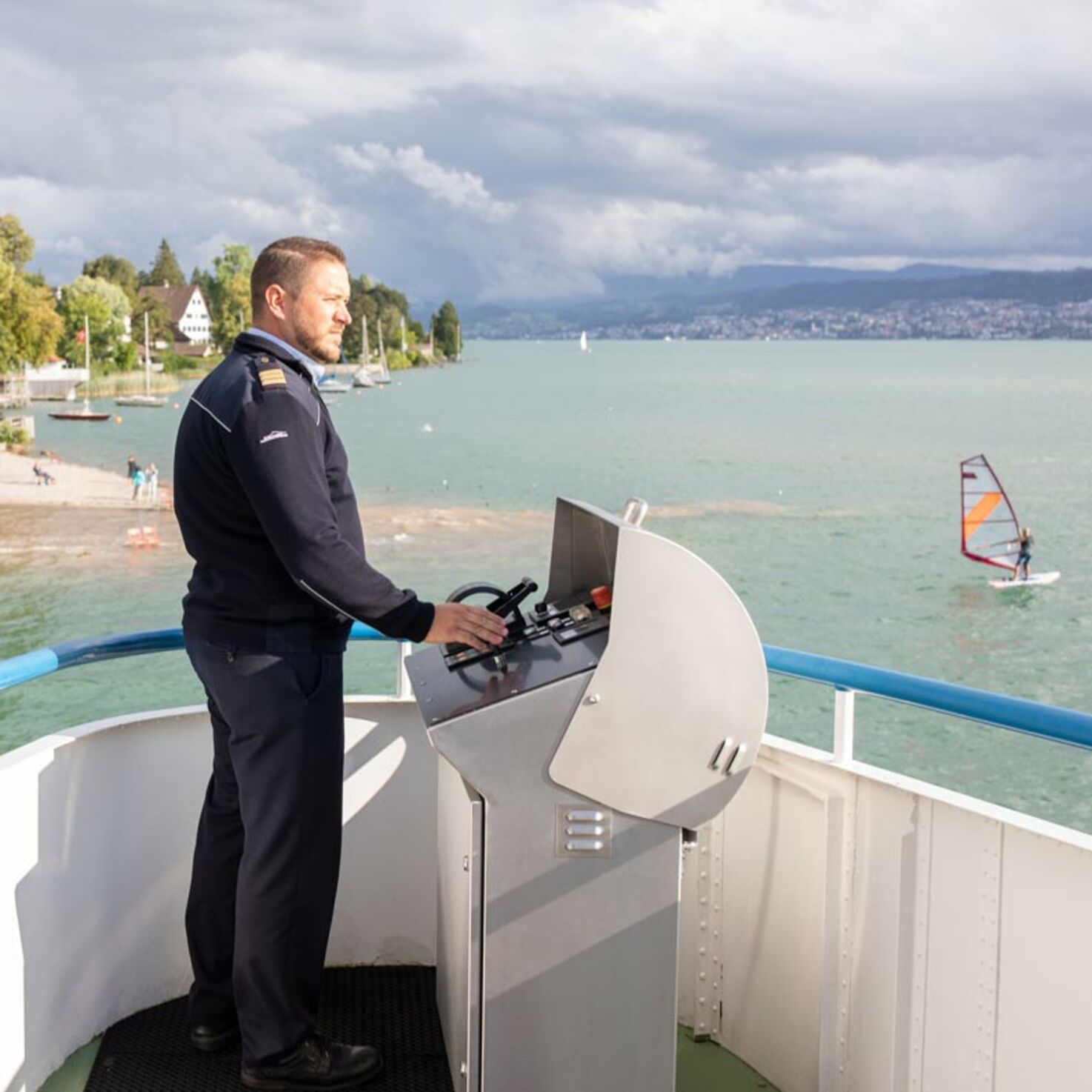 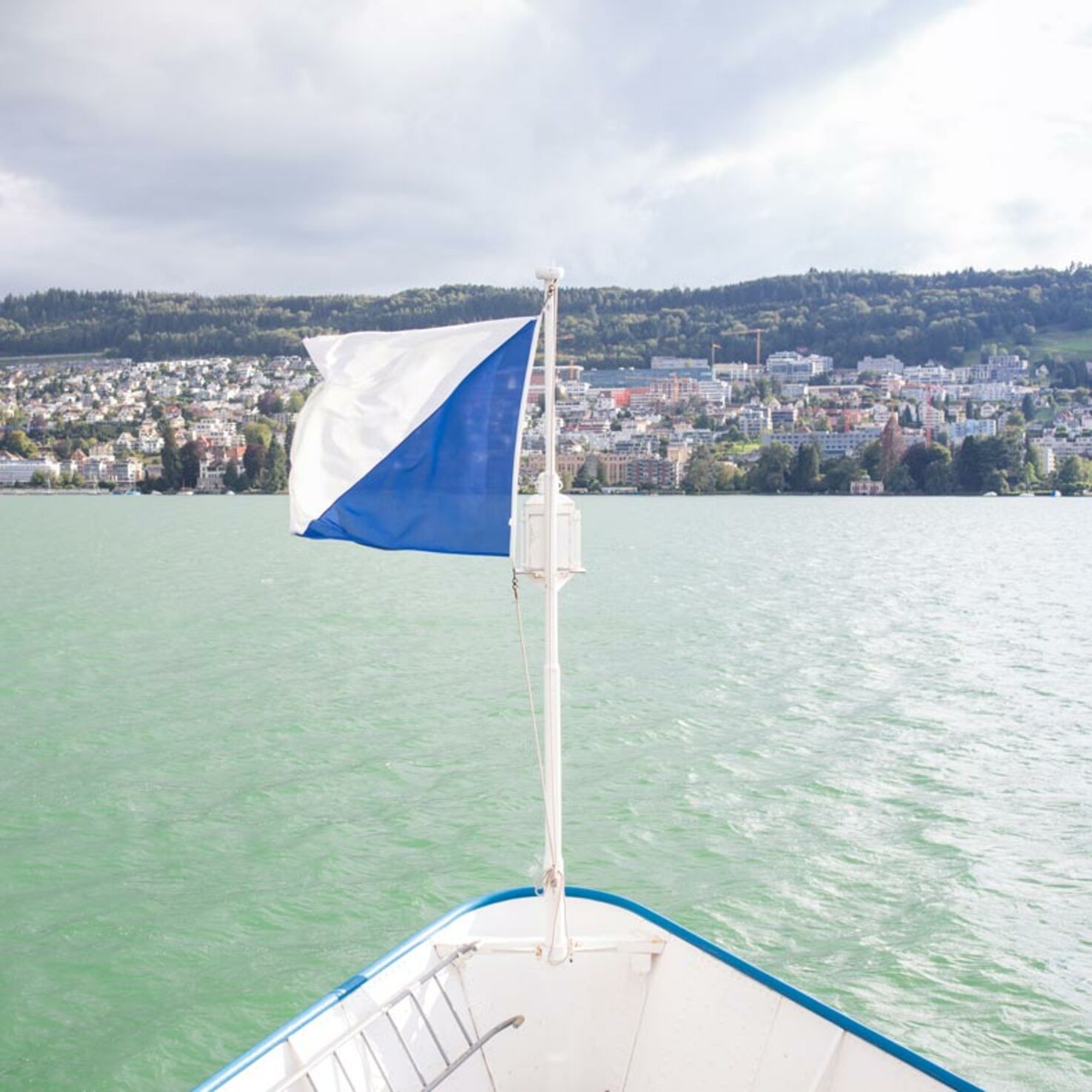 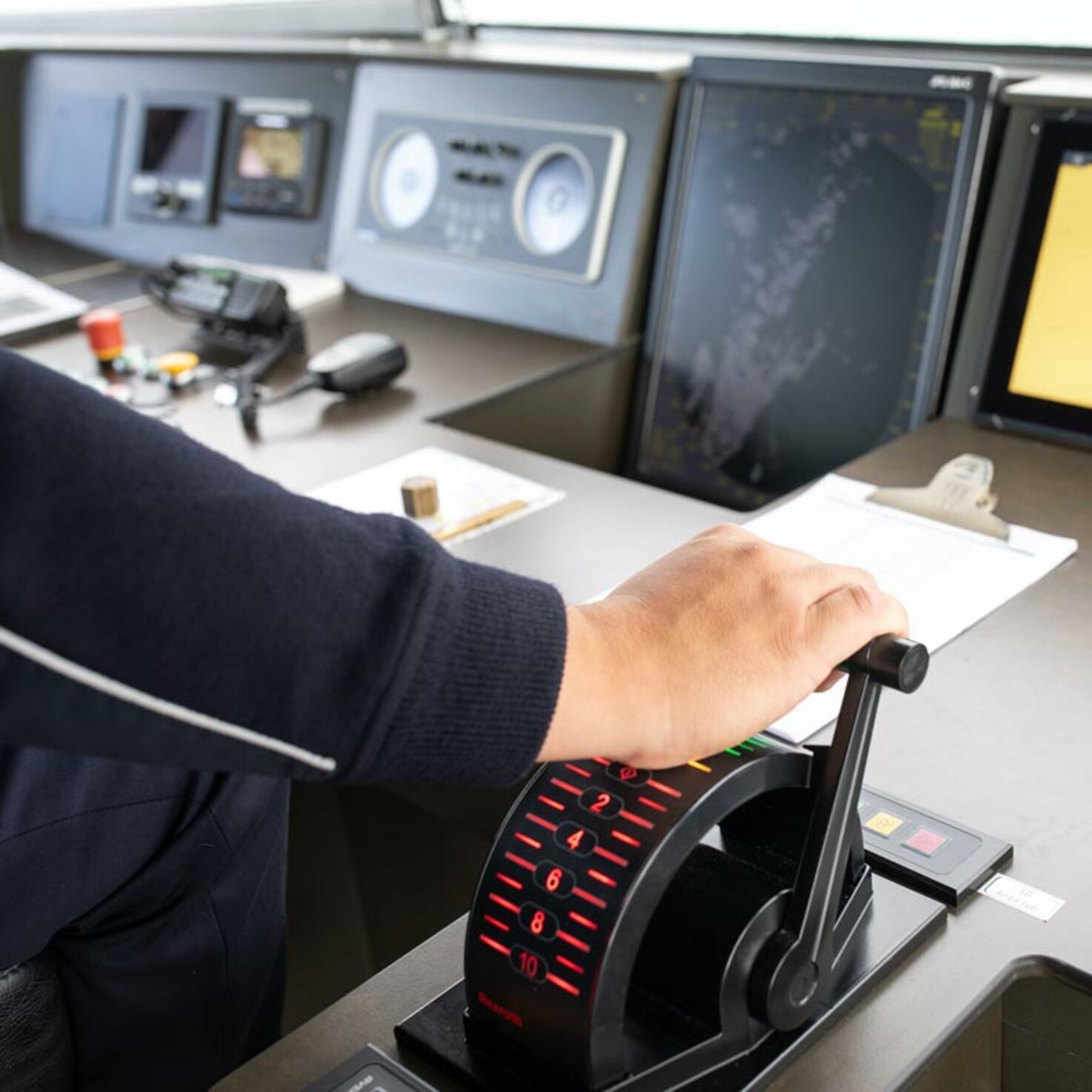 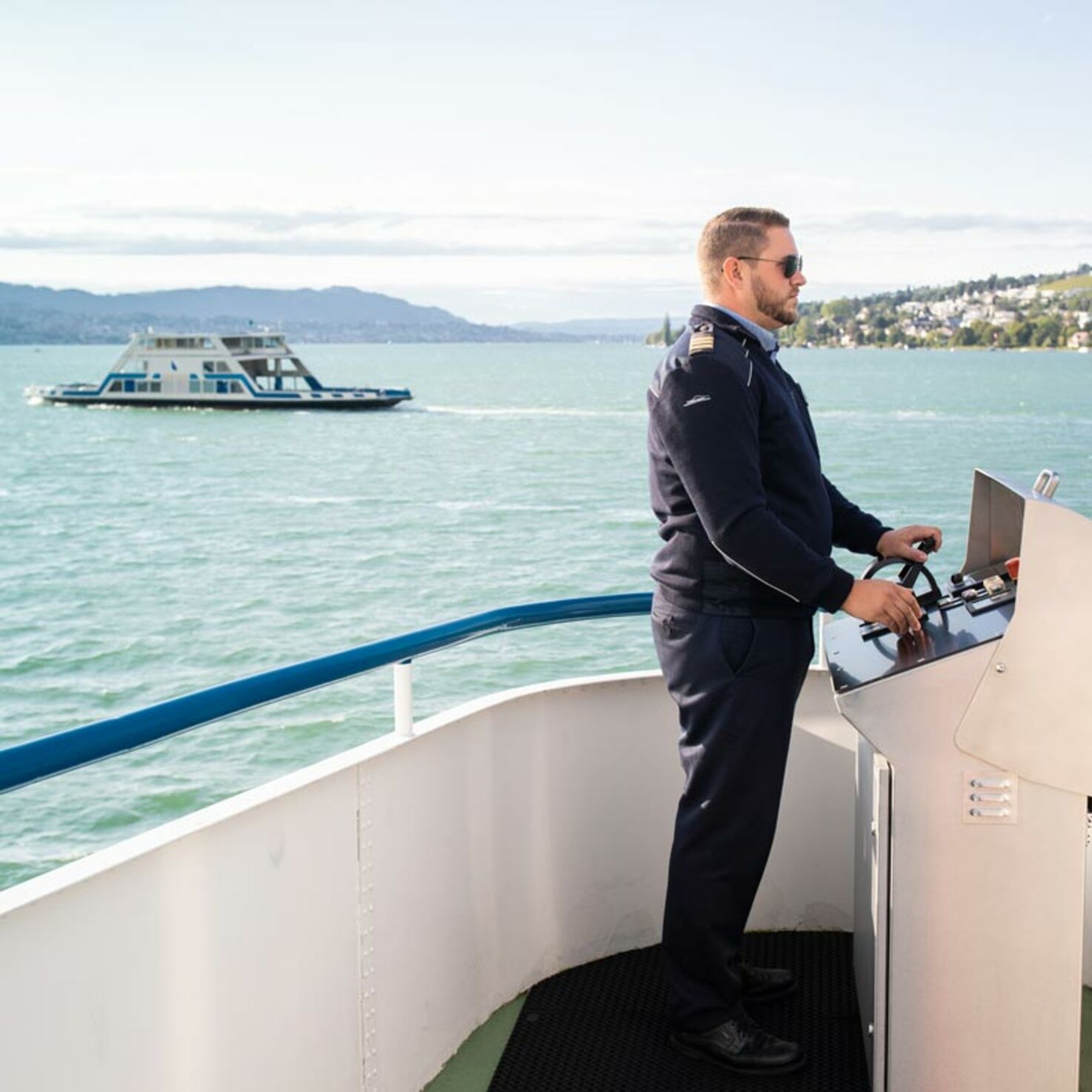 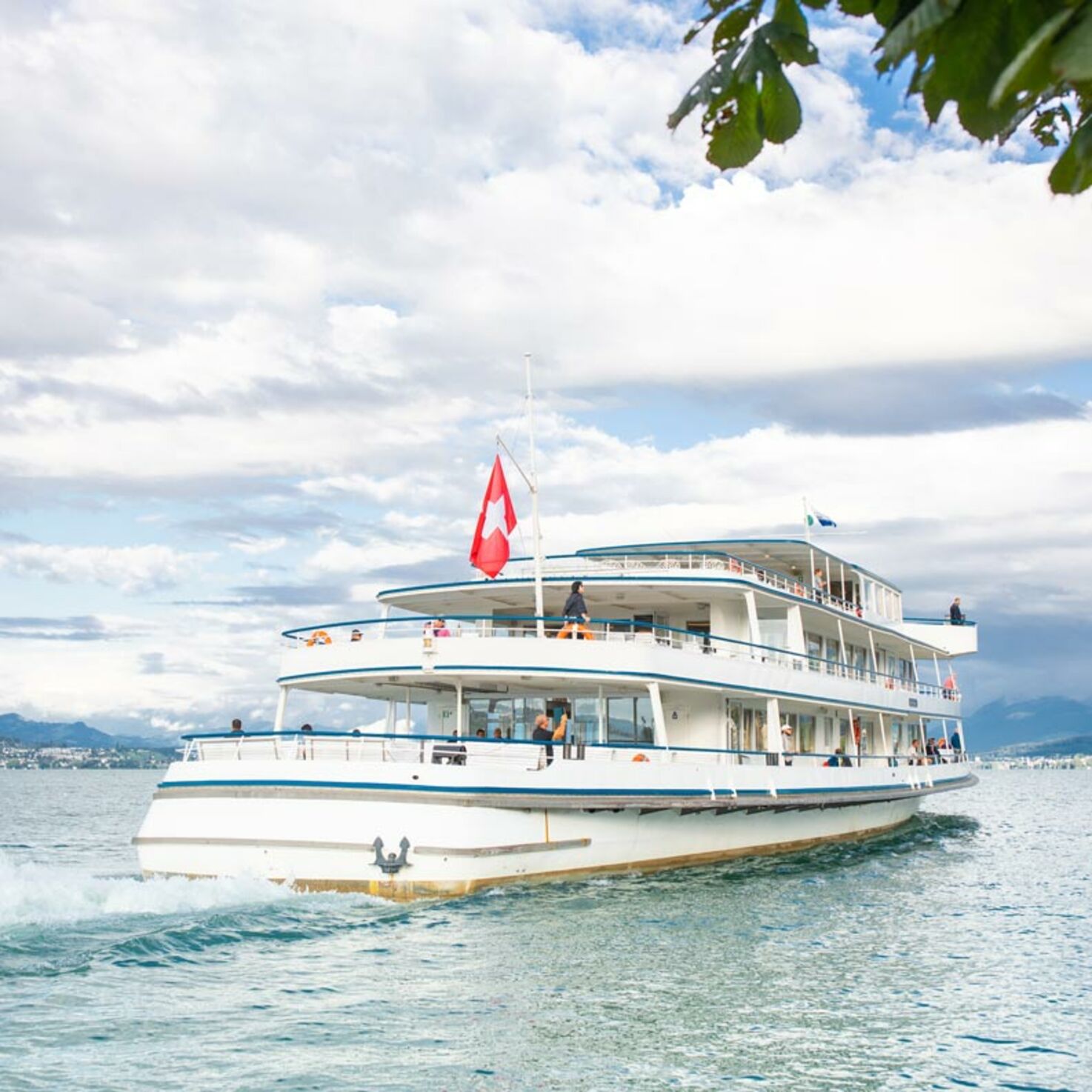 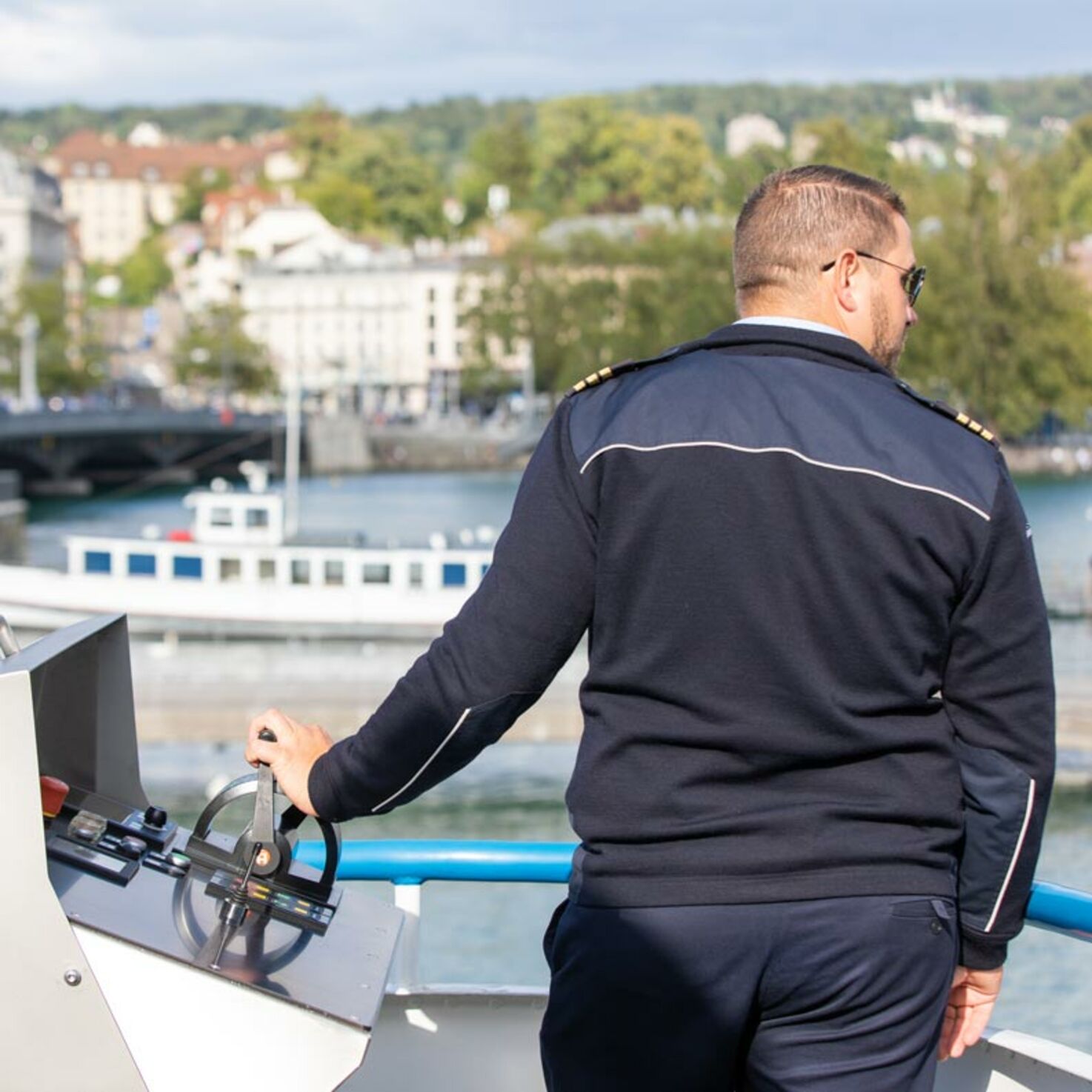 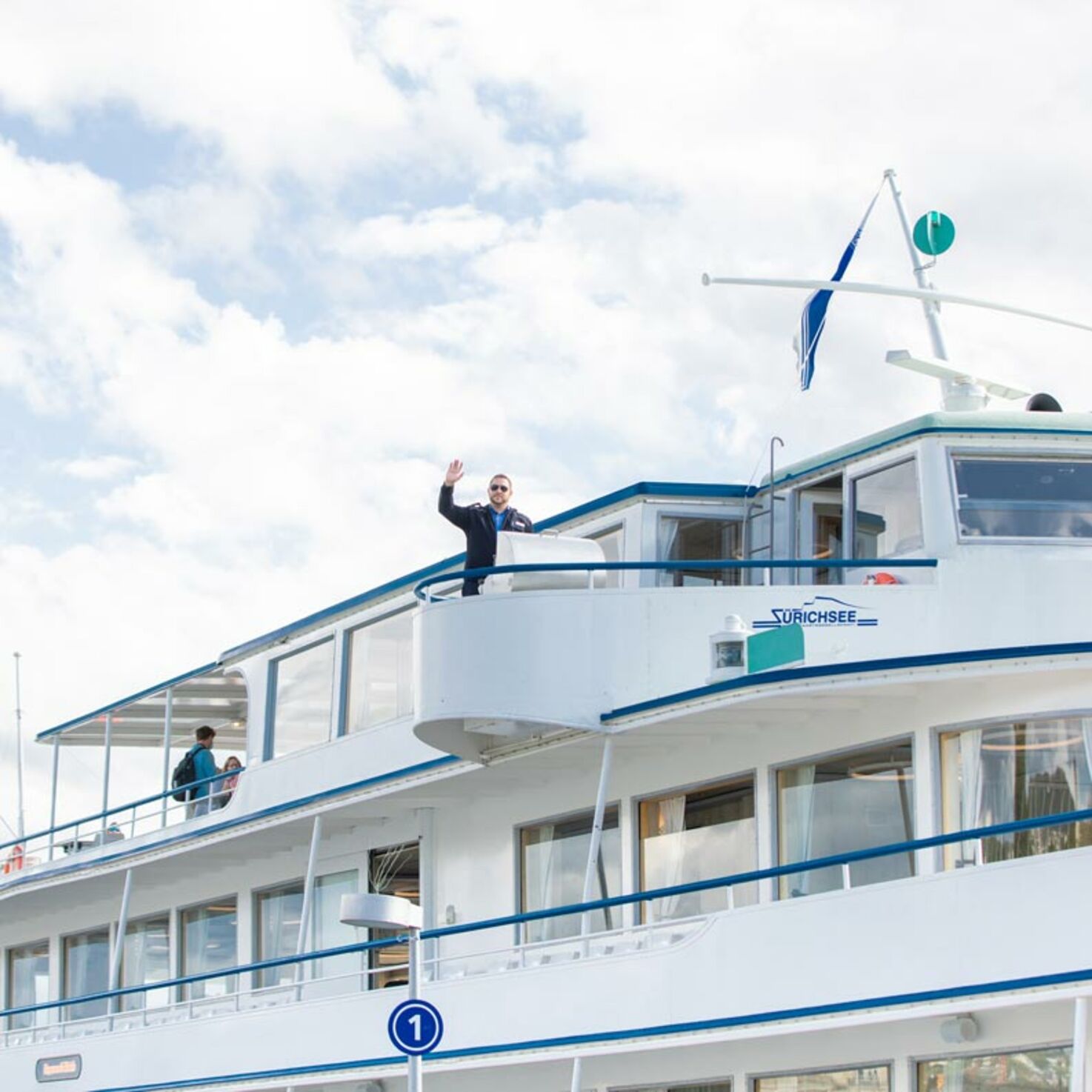 The skippers of Lake Zurich skilfully manoeuvre motorboats and steamships from mooring to mooring, transport goods and guide passengers safely to the other shore. Marco Pfister is one of them. In this interview, he talks about his career and the best moments on board.

Marco, how do you become a ship’s captain?

There is actually only one way: you start right at the bottom, as an ordinary sailor, and it was no different in my case. You spend one to two years learning the basics, and in that time you make up your mind about whether it is the right job for you.

Then you learn about the cash side: in other words, you concern yourself mainly with the guests on board, catering and service. After another one to two years, you can then decide either to stay there or to undergo further training to become a ship’s engineer or, indeed, a captain.

‘First with small boats on the River Limmat, and then you work your way up to bigger motorboats and steamers year by year.’

And you went for option 3, didn’t you?

Exactly. The first part of a captain’s training is theory: legal texts, mechanical engineering, insurance matters. You learn all that inside out, and then you do an exam with 80 open questions to answer to the best of your ability.

That sounds relatively exhausting, doesn’t it?

Yes, the theory exam is far from easy, but that is actually a good thing because once you have passed that, it really gets serious. This is when practical exercises begin, first with small boats on the River Limmat, and then you work your way up to bigger motorboats and steamers year by year with additional training courses.

How long have you been a captain?

Since 2015. Alongside that, I train ship pilots and work as an instructor for those who want to become captains themselves. Also, in the winter months when things are a little quieter on the lake, I do some work on the side as an electrician, which is my original profession.

‘The likelihood of something going wrong is greatest as you set off and as you dock.’

What does a typical working day look like for you?

That is not so easy to answer. All my days begin the same way at first: with a good cup of coffee (laughs). What comes next, however, is extremely dependent on what the weather does. On sunny days, most of it is routine. If there is rain or even a storm, however, I have to plan and check which trips will be possible and which will not.

What is important to do before each time you set off?

Before our trips, I usually meet up with the engineer on board. He makes sure everything is in perfect working order and checks any damage from the day before. Meanwhile, I prepare everything in the wheelhouse, where I check the lights or radar, for example. Then I talk to the crew once more, and as soon as we are all ready, we set off.

How many members make up the crew?

On the largest ships in our fleet, the crew is made up of four people: one ordinary sailor, one engineer, one person to handle the money, and one captain.

That doesn’t sound like many for such a huge vessel.

Or for hundreds of guests on board. This is precisely why it is so important for all crew members to be well trained and to know exactly what they are supposed to do. A good, experienced crew can also cope with boats as large as these.

Could you also steer ships at sea with your licence for the Lake Zurich ships?

No, that is a different category of licence. Mine is limited to passenger ships for inland waters, meaning lakes or rivers. However, that does not mean it is easier to obtain such a licence.

What do you mean by that?

Many people think it is much more demanding to steer a large ship at sea, but this often makes me shake my head. At sea, you could proceed straight ahead for a whole week and nothing would happen. On Lake Zurich, we perform a total of 780 manoeuvres, or landings, with our 17 ships every day.

And is that where things could get tricky?

Yes, exactly. The likelihood of something going wrong is greatest as you set off and as you dock. At these times, the most important thing is to be alert. Once you have moved away from the shoreline there is, essentially, much less danger.

Are you tense during such manoeuvres?

No, stress and tension are inappropriate, because mistakes can happen otherwise. You have to stay calm and keep your head. Then you will be able to cope even with difficult landings – for example, when there are waves and high winds.

What happens if, despite the weather forecast, you are caught by surprise?

That is annoying, of course, but it can always happen in the summer months. You can set out in bright sunshine, and then suddenly a storm catches up with you and the wind lashes across the water at 100 kilometres per hour. In such situations we usually turn into the wind and wait until the worst is over. That is what is meant by the term, ‘weathering the storm’.

‘You can set out in bright sunshine, and then suddenly a storm catches up with you and the wind lashes across the water at 100 kilometres per hour.’

I appreciate the fact that when I bring the ship safely into port in the evening, I am really off duty. I do not have to think about the next day, and I can clear my head. I like that I do not take my work home with me and constantly dwell on it.

What are the most enjoyable moments for you as a captain?

When I am on the early shift and set off shortly before 06:00 in the morning, sitting in the wheelhouse and drinking my coffee, and the sun rises slowly over the lake – those are special moments. They make me realise how great the job here actually is.

And what sometimes bothers you about your work?

I sometimes wish our guests would show a little more understanding. Of course, I can appreciate that many of them have appointments and need to get to the other side quickly. But especially in bad weather and a heavy swell, you sometimes have to accept that safety comes first. At those times I wish people would praise us for our good work despite the adverse conditions, instead of just moaning and complaining about a delay of a few minutes.

What is the most important prerequisite for becoming a captain?

I think the most important thing, as with so much in life, is that you should enjoy your job. If you have that, everything else comes naturally.