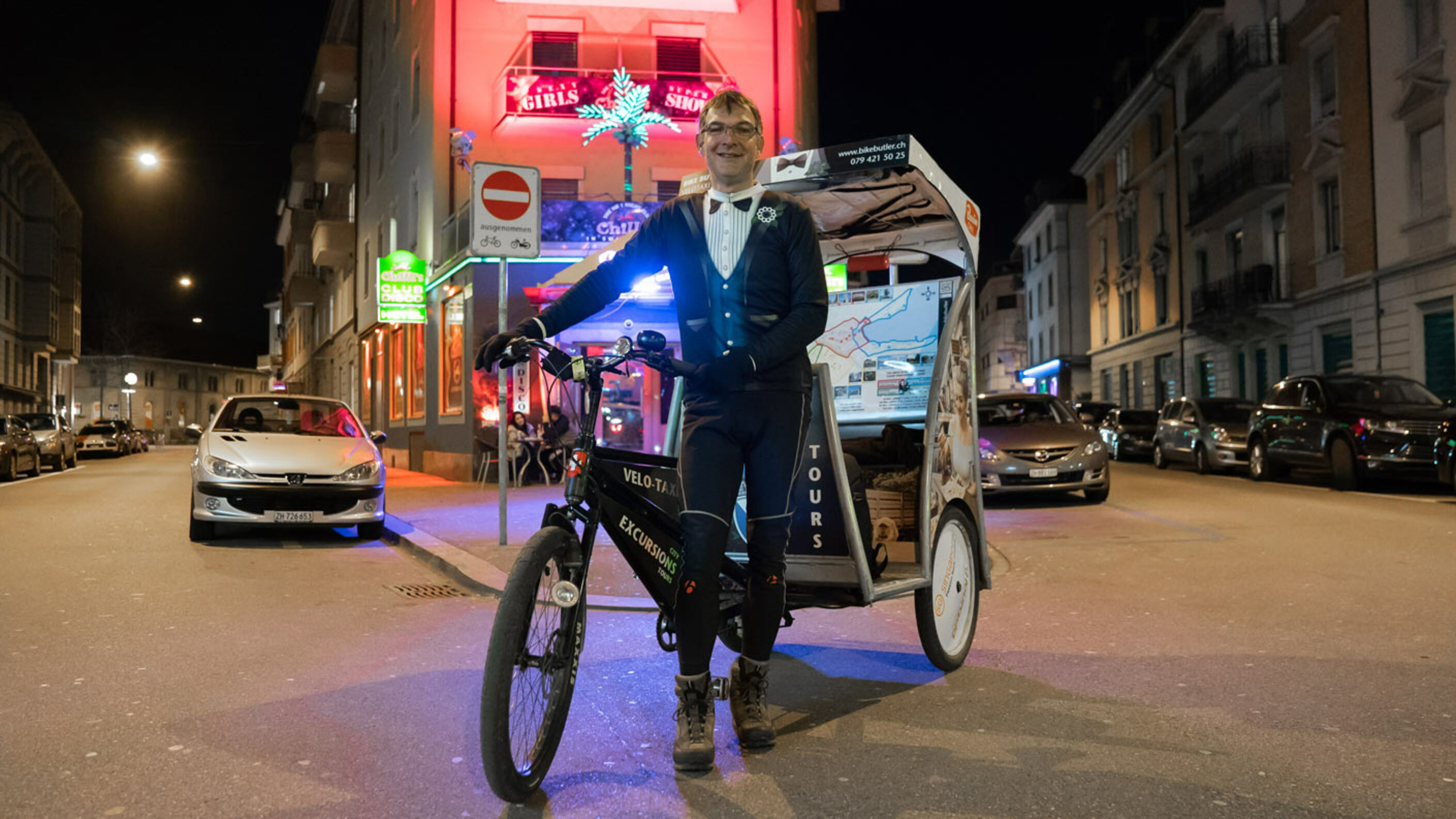 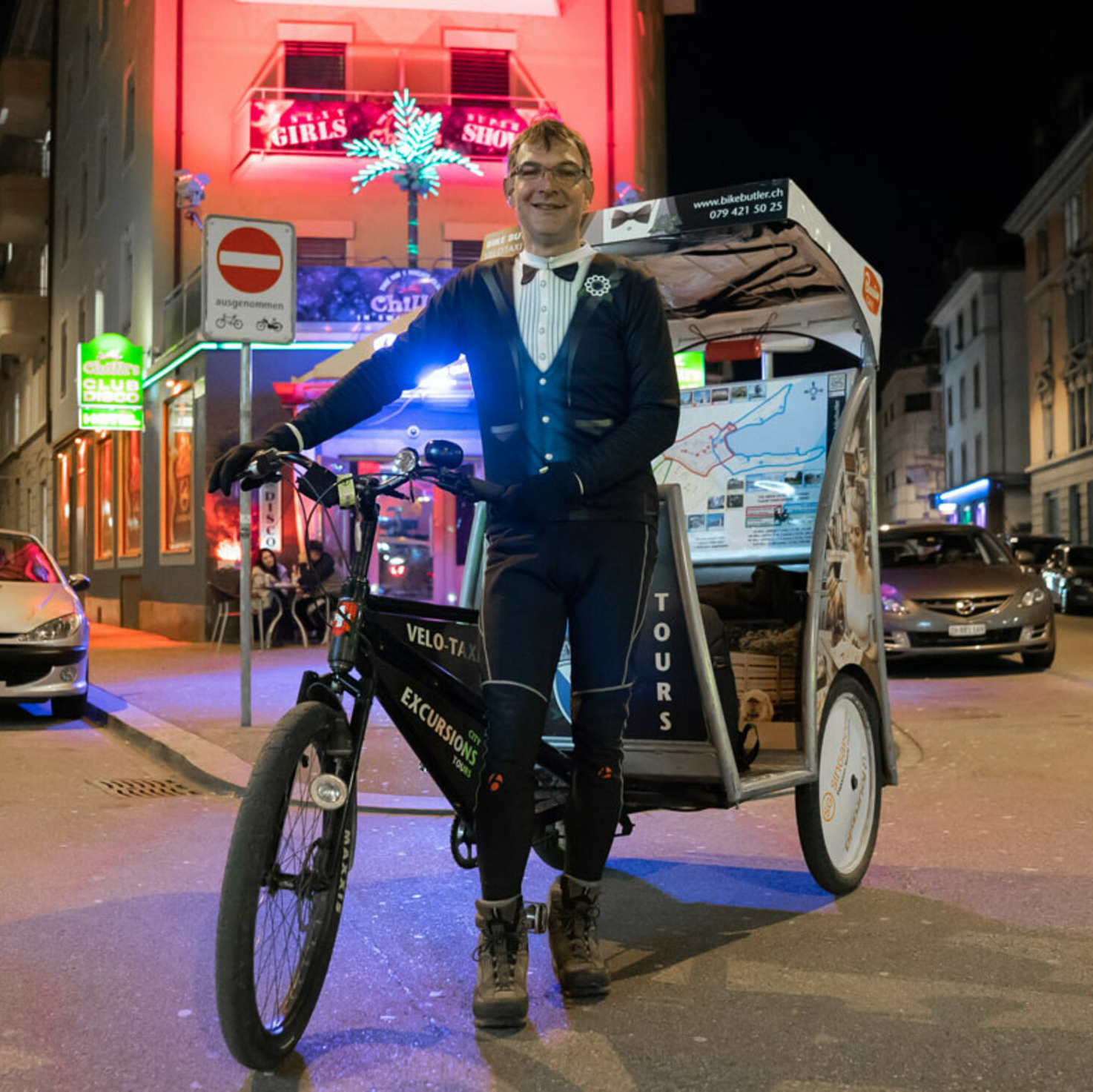 For the last seven years, Beat Menzi and his rickshaw have been conveying partygoers, seniors and wedding couples around Zurich. We join the Bike Butler for a tour of Langstrasse.

The cold wind whistles around Beat Menzi’s ears. It’s the start of the season for the Bike Butler, and the nights are still cold. ‘Don’t worry,’ Beat calls over his shoulder, ‘It’s OK when I’m moving!’ The Bike Butler uses conventional bikes rather than e-bikes for his rickshaw city tours. Sometimes he even works up quite a sweat in his practical butler’s shirt. As for me, the wind and rain are no problem – it’s lovely and cosy in the rickshaw.

‘Hey, can you take me to Birmensdorf?’

Beat whisks us down Langstrasse. Some of the locals don’t like these tours because the rickshaw plays loud party music – currently it’s Jennifer Lopez with On The Floor. This doesn’t always go down well, particularly on weekdays when even Langstrasse is pretty quiet. Our nostrils are accosted by a mixture of e-cigarettes and spicy fast food.

Smokers and a few wobbly-looking individuals are clustered outside the Olé Olé Bar. One of them laughs and shouts: ‘Hey, can you take me to Birmensdorf?’ He probably doesn’t realise that Beat would do it at the drop of a hat. But it’s time for us to move on – one of the group is lurching zombie-like towards our rickshaw with a broad grin. As we continue our trip, Beat says: ‘I normally do the day tours.’ It’s his business partner Arjun who has a wealth of stories to tell about night-time encounters and long nights of partying.

Beat set up Bike Butler in 2012 with a single rickshaw. He was tired of working in an office: ‘I wanted to be out in the fresh air and with people.’ Bike Butler’s fleet now consists of four rickshaws.

As we pass X-tra, Katy Perry’s Roar blares from the speakers. At weekends, there’s always a throng of clubbers around the door. Beat says the rickshaws also serve as party taxis – Arjun ferries his passengers from club to club.

But Bike Butlers are not just for party people. They can also be booked for a range of city tours and even for weddings. Bike Butler also offers transport for older people, perhaps driving them into the city to go shopping. Beat tells us: ‘Seniors are some of my most interesting customers because they remember what Zurich used to be like.’ They love to share their stories with the Bike Butler, and otherwise many of them would find it difficult to get out and about. He learns all sorts of things about the city that are only known by people who were there at the time – a time when Langstrasse wasn’t a mecca for clubbers.

The drunk is still there, dancing to a tune that only he can hear.

‘A customer once paid me with a Krugerrand,’ says Beat. At the time he thought he had come off badly, as the ride cost around 150 francs. But then he discovered the gold coin was worth over 1,000 francs. ‘That’s my biggest tip ever!’ says Beat with a laugh.

He throws a U-turn and we head back, passing the Olé Olé Bar once again. The drunk is still there, dancing to a tune that only he can hear. Will he manage to cross the road to the station and find his way home? Who knows – but even if he misses the last train, he can be sure that the Bike Butler will still be out plying the streets.

Bike Butler offers a wide range of city tours for a maximum of four people. It costs 100 francs for a one-hour tour. More details here.