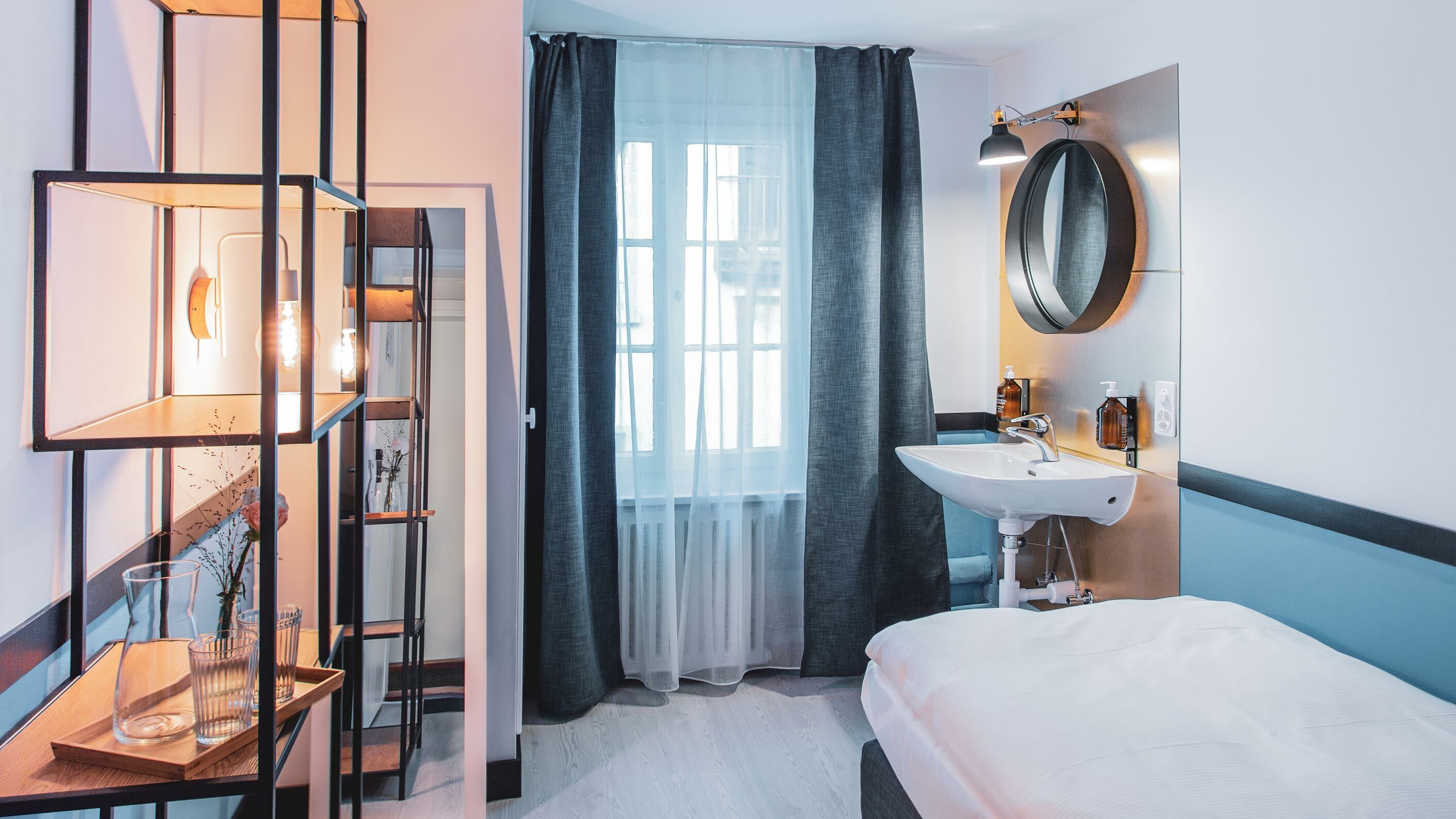 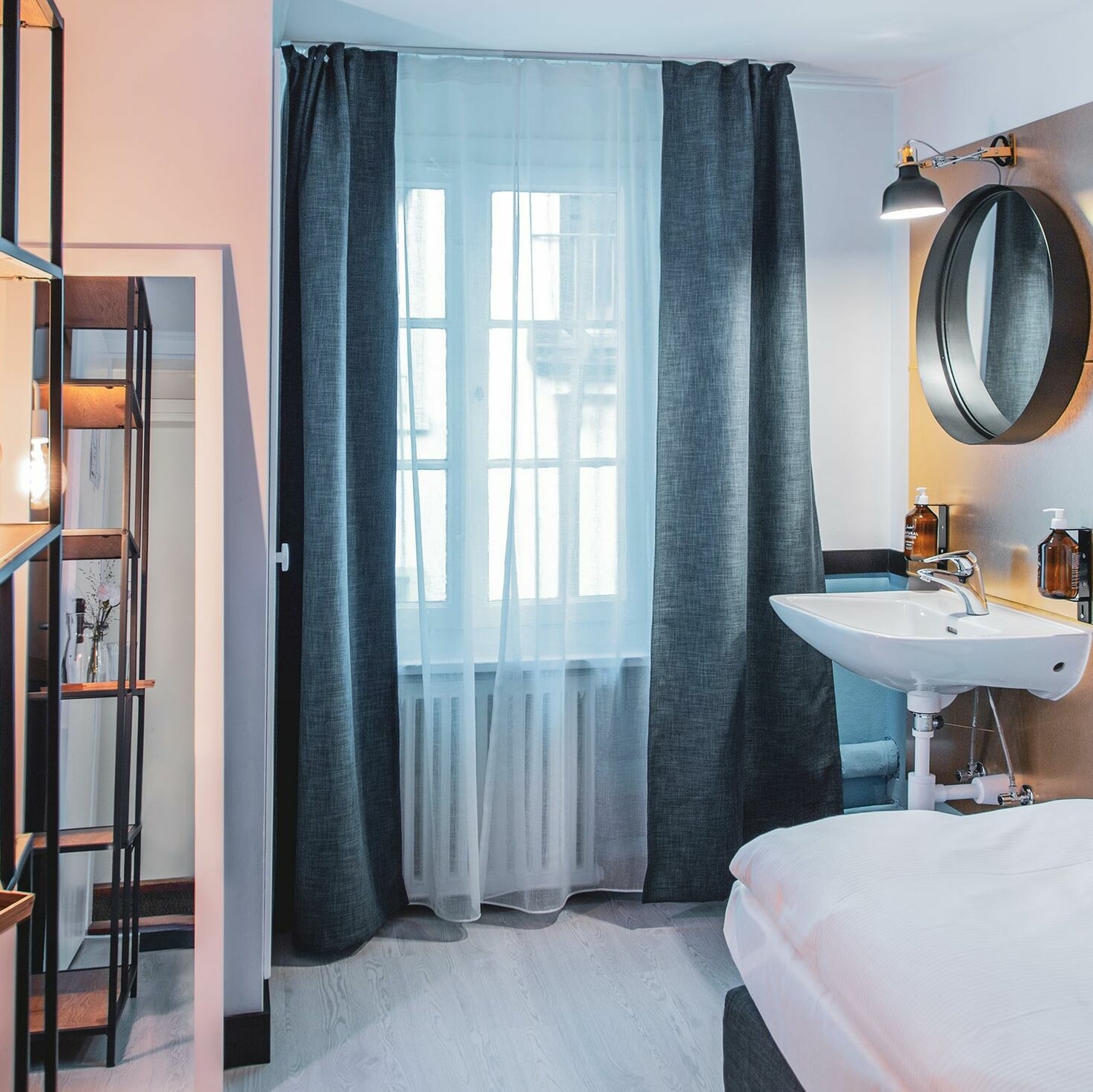 The Hotel Krone used to be known as the worst hotel in Zurich, a place where people only stayed if they were on an extremely tight budget. But now, after a major facelift, it will be operating as a pop-up for the next two years. We went to check out the ‘new’ Hotel Krone on Limmatquai.

In the past, online reviews of the Hotel Krone mentioned the smell of cigarettes, cobwebs, filthy carpets and unusable toilets and showers. It was clearly a dodgy place to stay, with one former guest even recommending getting drunk in the bar next door as a way of summoning up the courage to go to bed. Some guests complained about bedbugs, and many thought the only good thing about the hotel was its location. Other reviewers said the hotel’s 28 rooms were as good as you could expect for the price – this is Zurich, after all. In the wake of the renovation, we decided it was high time we took a look for ourselves!

The hotel before the renovations.

I get off the tram at Rudolf-Brun-Brücke, my mind still buzzing with these images. I’ve managed to convince myself that they are consigned to the past, but I’m still curious about what I’ll find because I’ve deliberately avoided looking at any recent photos. I can’t decide whether I’m expecting a youthful, functional hostel-type interior or a cool, stylised look with an IKEA vibe.

I walk through the door and my first impression is: neither. The small stairwell is now brightly illuminated, and the reception area at the top has a table in the middle rather than a high, impersonal desk. Behind it, a fridge is stocked with soft drinks, beer and Club Mate for guests to buy. I am checked in by Anna, who gives me a warm welcome.

The hotel has retained very few traces of its old self – even though it wasn’t so long ago, as the renovation work was completed in just two months. The owner of the building commissioned the experts at Projekt Interim to handle the conversion. Projekt Interim also hired a new hotel manager, Karin Lenherr. Despite its major overhaul, the hotel still clings on to a few remnants of its past, such as the metal handle on the door of the lift. It still bears its original crown, a motif that is also used to good effect throughout the hotel.

I open my door with the keycard and am relieved to see there are no cobwebs. In fact, I’m quite impressed – the room is very inviting and tastefully furnished. I suppose you could describe its style as... modern country house? Or maybe vintage chic? Whatever, it looks elegant, clean and tidy. On the table by the window there’s a water jug and some flowers. I take off my jacket and instinctively go to hang it on the back of the door – but there’s no hook, just an emergency evacuation plan. I put it in the wardrobe, open the window and look out over the Limmat. I spot another crown beneath my window. I’m certainly not inclined to get drunk in the bar next door in order to get a good night’s sleep.

Instead, I head for the lobby, an attractive space equipped with tables, benches, bar stools and sofas. There’s complimentary tea and coffee, and I’m even allowed to eat the food that I’ve brought with me. I take advantage of this and spend the rest of the evening enjoying the view of the Limmat.

The hotel is so central that I’m in the office just 15 minutes after checking out.

Each floor has shared toilets and showers, and on my way to bed I notice that the loos are gender-neutral – the signs say ‘Whichever’. That’s something else I like, as I think unisex toilets make total sense. When I fall into bed, I’m happy that I don’t have to worry about bedbugs, and the brand-new box spring bed is so comfortable that I go out like a light.

At six the next morning, I’m woken by a passing tram. The curtains are thick, but unfortunately the same can’t be said about the walls. The sound insulation is poor because of the building’s great age – it’s 500 years old! If, like me, you’re a light sleeper, you’ll need to bring your earplugs. Resisting the urge to turn over and go back to sleep, I jump out of bed and take a shower. The fact that there are no mirrors in the shared showers encourages guests to go back to their rooms to finish their ablutions. I duly head back and use the soap in my room to wash the hair gel off my fingers. I have to dry them on the bath towel because no hand towels are provided. But it’s good that there’s some body lotion, as I like to put it on my hands in winter.

Reception is manned by someone else this morning, but they are equally friendly. The hotel is so central that I’m in the office just 15 minutes after checking out. My verdict? You won’t find a better place in Zurich for a low-budget stay.

The hotel exists as a pop-up until the end of October 2021. Rooms cost from 80 (single room) and 135 (double room) francs per night, view of the Limmat is available for a moderate extra charge.